In the market for a 7-seater SUV? Here’s a look at the latest three-row SUV options.

Practicality and comfort are deciding factors in a car buyer’s mind before finalizing a vehicle. An average ‘nuclear’ family in India consists of parents, children and grandparents, making it a plus size family of at least five or six members. Keeping this in mind, a seven-seater vehicle is more of a necessity than a luxury. In 2021, the launch of the Tata Safari led to a domino effect of sorts with a slew of three-row SUVs such as the Hyundai Alcazar, the seven-seater version of the Jeep Compass, and the Mahindra XUV700 getting lined up for launches ahead. Since the latter two are expected to be a segment above the Tata Safari, the MG Hector Plus, and the Hyundai Alcazar, we will set them aside for another day. 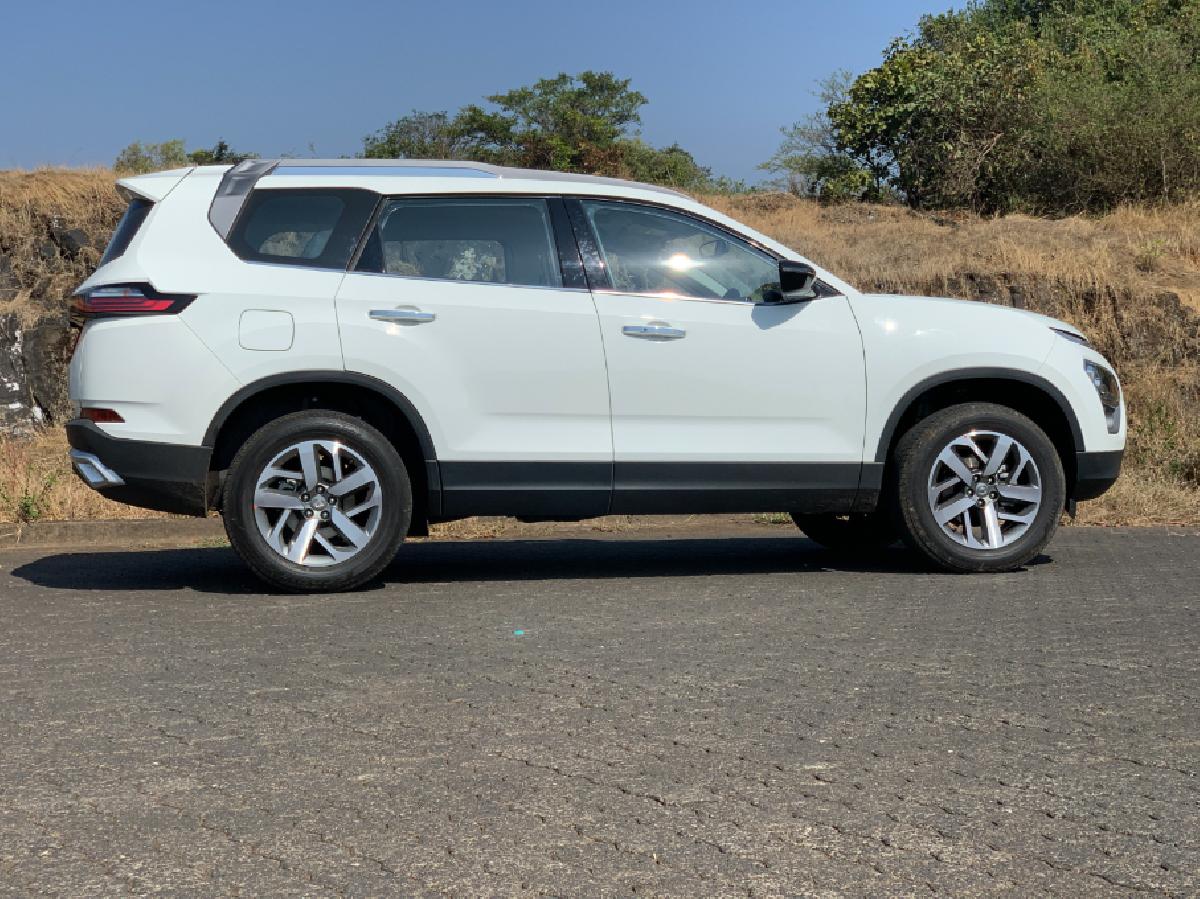 Tata Motors’ Safari gets a chrome front grille with arrow-shaped studs on it and the split headlamp gets a silver finish. On the side, the first thing that grabs your attention are the 80mm taller and 63mm longer dimensions as compared to the Harrier. What stands out is the signature stepped roof and the bigger 18-inch diamond-cut alloy wheels.

Tata has spruced up the Safari’s cabin with oyster white upholstery. The dashboard is crafted in three layers — the top is black, followed by an Ashwood finish, below which is a metal trim. This combination gives it a premium feel. The second row in the Safari is raised higher than the front seats so that the passengers get a clear and commanding view.

The third row not only gets AC vents with a controller, cup holders and two USB ports but also additional goodies such as a reading lamp and a separate mobile phone holder.

The Safari comes with a single engine option and is powered by a 2-litre diesel motor sourced from FCA. (Just like the MG Hector Plus) and has an output of 168bhp and 350Nm of torque. It is available in two transmissions — a 6-speed manual and a 6-speed torque converter automatic gearbox sourced from Hyundai. 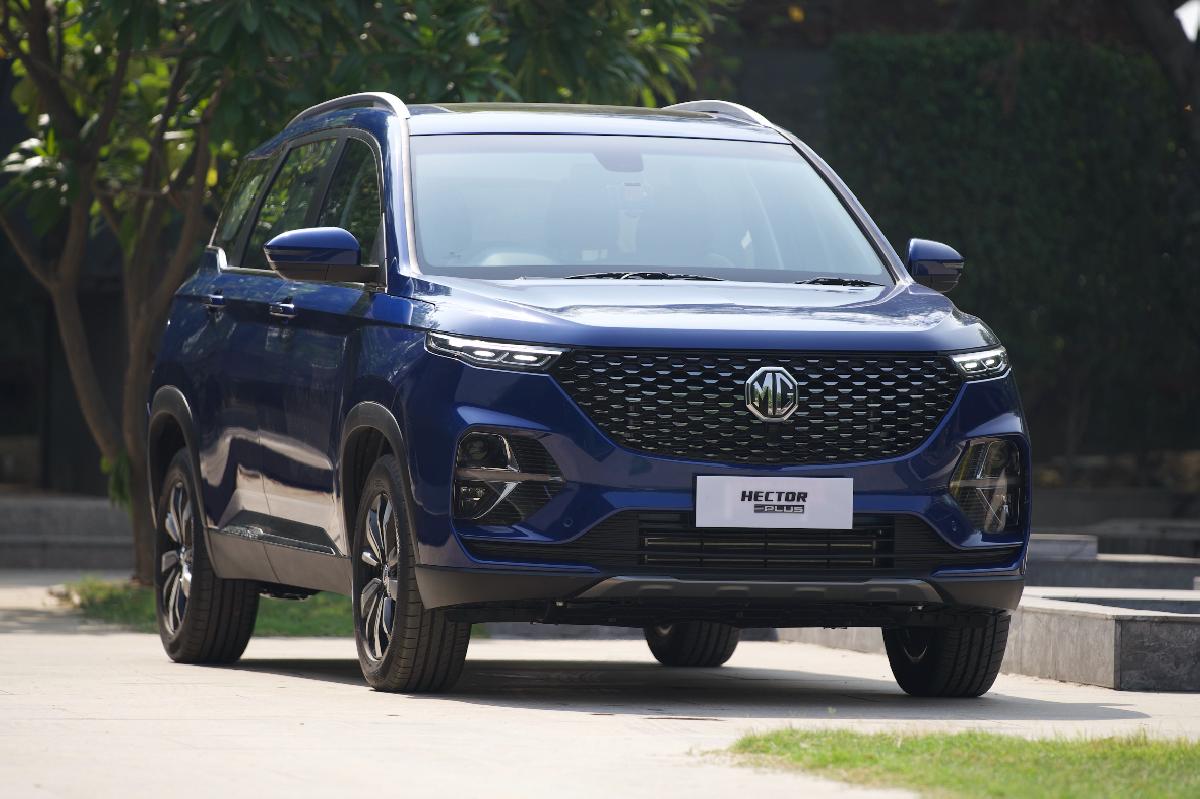 MG burst onto the Indian SUV scene by introducing smart technology and the Hector Plus stays true to its DNA. The Hector Plus (like the Tata Safari and Hyundai Alcazar) sports a split headlamp design with tweaked LED headlights, LED DRLs and front bumper to differentiate it from its 5-seater sibling. MG has reduced the bling factor and the Hector Plus gets an all-black mesh front grille instead of a chrome one.

The side and rear of the Hector Plus are identical to the Hector as they continue to have chrome door handles and chrome finish windowsills. However, it does get a new set of dual-tone 18-inch alloy wheels. The rear gets sleek and elongated LED tail lights, but now the tail lamps don’t run across the boot lid and now, there is a chrome strip. The biggest update is the electrically powered tailgate which can be operated with just a swipe of your foot under the rear bumper. This is first in the segment.

The Hector Plus’ cabin is predominantly black with tan-brown upholstery. This three-row SUV comes equipped with front ventilated seats that are electrically adjustable, a vertical shaped 10.4-inch touchscreen with Apple CarPlay and Android Auto, an 8-speaker Infinity music system with a subwoofer, wireless phone charger, cruise control, 360-degree camera, navigation system and a lot more. It also offers car connectivity tech along with over 100 voice commands that recognise ‘Hinglish’ words.

All three rows get USB charging ports, height-adjustable headrests and AC vents. The last row is also equipped with a separate fan speed controller. Apart from this, the Hector Plus comes with an embedded eSIM, which is 5G ready and provides over-the-air (OTA) updates.

The Hector Plus offers two engines — 1.5-litre petrol and a 2-litre diesel. The petrol is available in two trims, a turbo petrol one and a micro-hybrid version. The latter comes with a 48V lithium-ion battery, which is connected by a belt to an integrated starter-generator that runs the start-stop system. The output of both the petrol motor variants is 141bhp and 250Nm of torque. The diesel, on the other hand, has a power output of 168bhp and 350Nm of torque, identical to the Safari, but the MG SUV is only available with a 6-speed manual transmission. The petrol trim gets both a 6-speed manual and 6-speed dual-clutch (DCT) automatic transmission while the hybrid only gets the 6-speed manual gearbox. 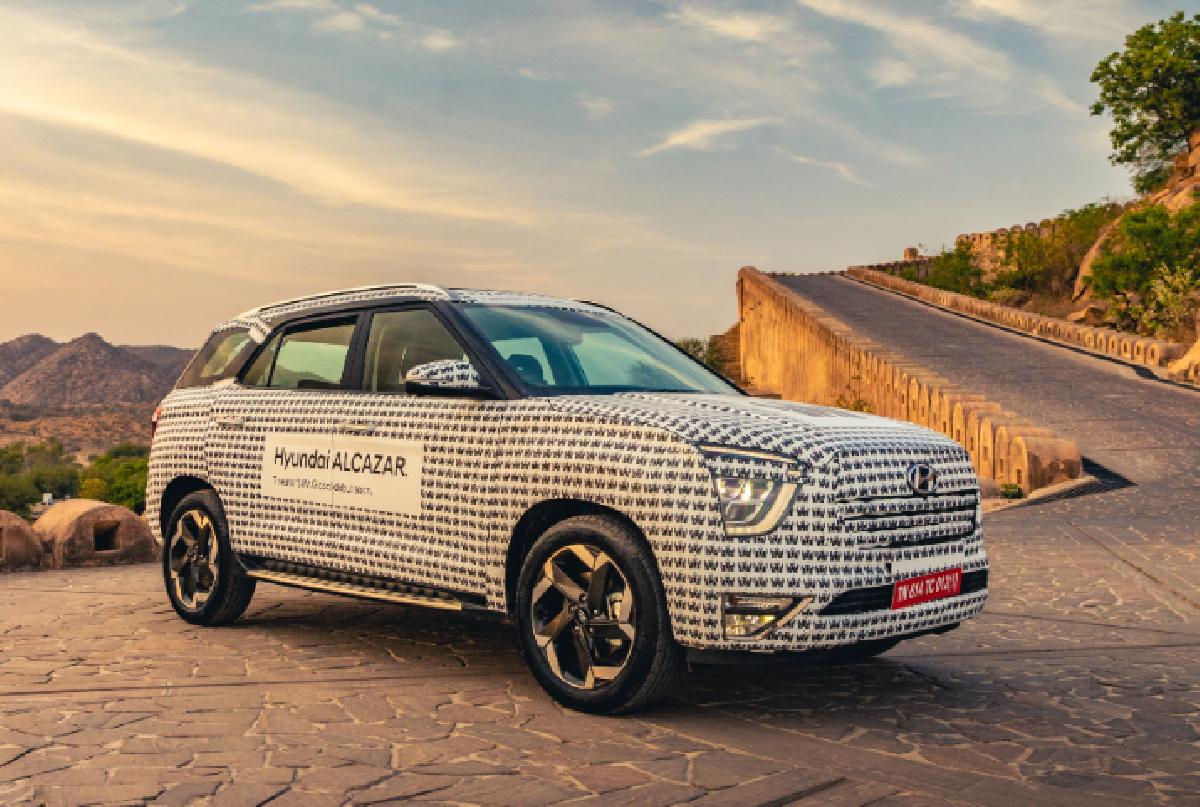 Hyundai Alcazar, which will be launched soon, is based on the Creta. With a 2,760mm wheelbase, not only is it 150mm longer than the Creta, but it is also the longest in the segment as compared to Tata Safari’s 2,741mm and the MG Hector Plus' 2,750mm length.

The Alcazar borrows a lot of design elements from its 5-seater sibling-like most SUVs in the segment. Hyundai has tweaked some parts of this new SUV to give it its own distinct look like a chrome studded cascading front grille, redesigned headlamps and new foglamps. It also comes with faux skid plates in the front and at the rear.

The side profile is where the Alcazar’s additional length can be seen to accommodate the third row. It gets a thick grey C-pillar like the Creta and a big quarter glass for the third-row passengers. It also comes with a side footstep and sports 18-inch alloy wheels like the Safari and Hector Plus.

At the rear, the Alcazar, gets new wrap-around tail lamps with a thick metal band running between the rear lights.

The Alcazar’s interiors are black-brown in colour, and it is expected to retain all the features from the Creta such as the 10.25-inch infotainment, car connectivity tech and the front ventilated seats, for instance. It also comes with some new goodies like multiple driving modes, a 360-degree camera and ambient lights.

The seating configurations are the same in all three SUVs as they all are available with Captain seats or a second-row bench. This row can slide backwards for more legroom. The Alcazar comes with a one-touch tip and tumble feature that folds the second row to offer easy access to the last row. The Alcazar’s 6-seater trim also comes with a floor-mounted armrest that houses cup holders, a wireless phone charger, and additional storage space.

The Alcazar offers a class-leading 180 litres of boot space as compared to the Hector Plus’ 155 litres and the Safari’s 73 litres.

The Alcazar will offer multiple engine options like the 2-litre petrol from the Elantra and the Tucson and the tried-and-tested 1.5-litre diesel from the Creta. The former powertrain will churn out 156bhp and 191Nm with a choice of either a six-speed manual or six-speed torque converter automatic transmissions. According to Hyundai, it can do 0 to 100kmph in less than 10 seconds. The 1.5-litre unit pumps out 113bhp and 250Nm of torque and is mated to either a six-speed manual or a six-speed torque-converter automatic.

All three SUVs get a 4x2 wheel drive system, come with all four-disc brakes as standard, and get a panoramic roof.