In Part I, of our IV-Part series on, Pratap Bose, VP, Global Design, Tata Motors, he talks to us about drawing cars in his biology books, observing Ratan Tata’s sharp eye, beginning his career with an Italian company, working for a German company in Japan, and finally landing the job with Tata Motors, after two unsuccessful attempts!

Meet Bombay born and bred, Pratap Bose, 45, Vice President, Global Design, Tata Motors. Bose is the man responsible for transforming the design language of passenger vehicles manufactured at their plants with his design leadership, and he has also played a big role in further elevating the company's brand perception in the minds of people, while making their vehicles even more desirable.

We asked the doyen of design to enlighten us by telling us about what exactly constitutes good design. “Good design, while having an aesthetic and functional element to it, at its core, answers a question that people themselves aren’t aware of yet. Good design is about anticipating what someone else would need. Did you think, you would need an iPad in your life? No USB, no CD, no keyboard also. They [Apple] answered a question, you didn’t even know you wanted to ask. I think that is good design,” says Bose.

It was good design in the form of a beautiful blue Mercedes 280 SEL, standing in front of the Taj Mahal Palace Hotel, at Apollo Bunder, in Mumbai, that sparked off Bose’s interest in car design as a school kid. “I don’t know what it was, it was this sort of magic moment, the light, the time, the beauty of that frame, it is still [etched] in my mind. I remember saying … an architect designs a building, but there must be someone who designs a car, and that was a seminal moment or turning point in my life,” says Bose.

Pre-Internet days meant going to the library and digging deeper to know if car design was even a profession. Bose had found his calling. The impulse of drawing cars in his books had taken over in a big way, resulting in not just being thrown out of classes but also in his parents being summoned to school. “You can’t really stop that passion, so, you’re drawing little cars when you’re supposed to be drawing the dissection of a cockroach or an earthworm. I went through all of those phases,” he says.

The early 90s, in India, was a time when car design was not an academic course to study because there wasn’t a specialized course in Transportation Design, like there is today. Bose calls himself “very fortunate” to get into NID, (National Institute of Design), Ahmedabad, and study Industrial Design, back then, where a flexible curriculum allowed him to choose projects that eventually directed him towards his specialization. “In those days, product design, was more oriented towards home appliances, home electronics, mixers, grinders, washing machine, white goods because that’s how the industry started in India. There was very little in automotive with no specialized education in automotive at all,” says Bose.

Around 1996-97, during Bose’s eight-week, summer internship, at the Tata Motors plant in Pune, Bose, recalls seeing Ratan Tata, Chairman, Tata Sons, for the very first time. Tata was there to review the Indica, which was being designed at the time, and Bose remembers being hugely impressed with his eye for detail. “I was standing in a corner, peering over a wall, and I saw that Mr. Tata noticed that the model didn’t have the right stance. He said that the front looks higher than the back. The Indica model at that time had been flown in from Italy because in those days, I.DE.A (Institute of Development in Automotive Engineering) Institute, did all the projects for us, especially the passenger cars, Indica, being the first. Sure enough, somebody came with a measuring tape and measured it, and it was slightly out. Later on, I realized that Mr. Tata is an architect himself, he has great taste and a very good eye,” he says.

Bose went on to graduate from NID, but he did not get into Tata Motors. Instead, he went on to begin his career with Piaggio, Italy, who were at the time starting a project for India. “I flew Al-Italia from Bombay to Milan, had my first espresso on that plane, and didn’t sleep at all,” recalls Bose.

Not having an “automotive design education” before, Bose, had picked up whatever he could from magazines, even how to draw cars, and that’s why, both, Piaggio and Italy, were very big learnings for him. There he learnt about how “lifestyle is so integral to a product, how design is so much about beauty, about aesthetics, but also about people’s really deepest emotions. To see the creation process of a two-wheeler, in this case, was fascinating,” says Bose.

Not knowing the language Bose tried harder as the modelers, the engineers and the entire project team didn’t speak much English.  “You get thrown in at the deep end. I think that is actually very important in a young designer’s life, to really have this difficult beginning because you try harder, you work harder, you learn more, you see more, you get much more immersed in what you’re doing because you have to catch up with the rest of the team,” says Bose who was working with a team that had already designed the Vespa and the Gilera. “They’re all sitting there banging out stuff and here you are, you’ve just about learnt to draw a scooter, so, it’s a very different kind of challenge,” reveals Bose.

A stay intended for six months turned out to be a two and a half year long one, after Piaggio made him an offer to join their design team as Senior Designer. Bose says that his Italian stint was a very good formative phase for him with “great colleagues” in “a beautiful country” where he also managed to travel a lot.

Next, Bose, realized that it was time for a little more specialized education, and so he applied to RCA (Royal College of Art) in London, and was lucky to get a scholarship from Inlaks Foundation. “The Royal College is the only design college in the world which is a ‘Masters Only’ college, all other colleges have a Bachelors and a Masters. People come there of a certain age, of a certain mentality, everyone has worked before they come there. So, they’re not really students in that sense. There is a lot of self-learning, self-teaching, you learn again from colleagues, so, these sort of extreme experiences, are very important… I really believe that,” says Bose who spent the next two years at RCA which turned out to be a very different and a very global experience.

After graduating from RCA, around 2002-2003, Bose, immediately, applied to Tata Motors again. A very difficult time for the industry and for various reasons, it did not work out for the second time as well. “Maybe there was a reason for it. something in destiny… maybe, it says you go to other places, learn a lot and maybe, then, your time will come, and the way I got in [Tata Motors] was so random, so strange,” says Bose.

However, by then, another opportunity presented itself, this time in Japan. “Again, you’re in a new place, new language, new culture, new corporate philosophy, so, it was back to this difficult time, but therefore, you learn a lot more,” he says. Bose recalls his first day inside a modeling studio, in Japan, where clay models were being built and he was being shown around. Bose was walking around with his hands in his pocket, and the CC TV cameras in the studio picked it up, and within 10 minutes, a Health and Safety officer in a uniform with a helmet and an armband, came in and said, “No, No, No….hand in the pocket… No.” “My colleague later explained to me that I should not be walking around the clay modelling area with my hands in my pocket because if i tripped on something, I would not be able to get my hands out of my pocket, quickly enough, to save my face. That was something very different,” says Bose.

What was also different in Japan, was wearing a uniform to work. From the extremes of Italy, where everyone was sharply dressed, and where two-hour lunch breaks with people drinking red wine for lunch was de rigueur, Bose, went into a work environment which was radically different. However, what it taught him, was to respect a corporate philosophy, a culture, a society, and a way of life. “That’s so fundamental because you don’t get a chance to experience all of this,” says Bose. 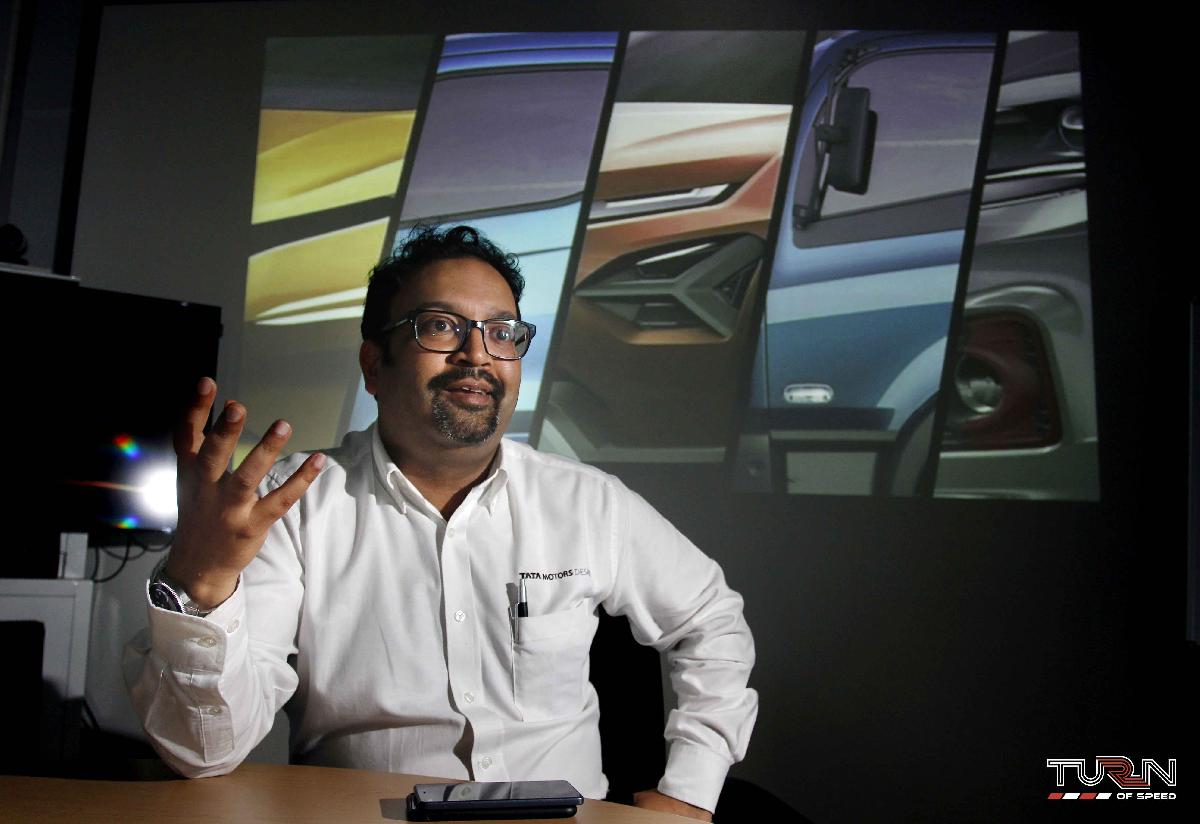 While he was working at Mitsubishi, in Japan, Daimler Chrysler-Mitsubishi split. His boss, Olivier Boulay, Vice President, Mercedes-Benz Advanced Design Center, Japan, who had been deputed to Mitsubishi, went back to work for Mercedes-Benz and asked a few from the team if they’d like to join him at Mercedes-Benz. “Because they had a studio in Tokyo, it was great for me, I didn’t have to relocate, so, I joined him there. This was a German company in Japan. Yet another crazy exposure,” says Bose.

By the time of the Tokyo Motor show, in 2005, the winds of change started blowing that would eventually lead Bose to the job that he had coveted over the years, at Tata Motors. It was at the Tokyo Motor Show that Bose bumped into some people from CII. Among them was Sugato Sen, who recognized him and invited him to speak at a design conference that CII was organizing in Delhi the following year. Bose suggested that his boss, Olivier Boulay, would make for a much better choice as a speaker, to which they agreed, and the following year, the duo attended the CII conference in Delhi together. “That evening, at a dinner organized after the event, Mr. Ravi Kant, Managing Director, Tata Motors, was also present, so, I walked up to him and expressed my desire to work at Tata Motors. He said he couldn’t promise anything, but asked me to leave some contact details,” says Bose.

A few months later, Bose, received a mail from Kant’s office asking him to come down to Bombay for a half an hour meeting with Mr. Tata, which Bose had requested for. So, Bose took a flight from Tokyo, arrived in Bombay, and had the meeting with Mr. Tata. “I told Mr. Tata all the great things about the company, all the products, but that somethings weren’t so great and how I could “help” which was crazy on my part. I would have never done it now…the naivety of youth – I was 31. [There] I was telling Mr. Tata, you could do this and this should be that, and being the gentleman that he is, he sat through it for 30 minutes,” says Bose. That was also the day, Tata, was signing with Marco Polo, and their delegation was waiting outside. So, Mr. Tata said, “Young man, I have got to attend to some other business, but if you don’t mind waiting then I would like to meet you again today.” So, Bose went downstairs, to the Tata Motors office, and waited, while enjoying fish curry rice, which Kant had been kind enough to order for him. At around 4 ‘o’clock, Kant’s secretary, came and told Pratap to come into Kant’s office. Bose found Tata sitting there. “Mr. Tata said to me, look, I pretty much disagree with everything you said, but I think you have a few points you made, and so, it would be great if you can come onboard and work for Tata Motors. We are establishing a Tech Center in the UK, so, I’d like you to go there first to work.”

(This is Pratap Bose’s 13th year with Tata Motors.)