A stroke of genius

Skoda Auto India’s brand-new offering, the Kushaq, is a handsome SUV, thoughtfully designed, with some “simply clever” bits neatly incorporated into it.

You’ll remember Skoda Auto India’s SUV, VISION IN, based on their modular MQB platform, from the Auto Expo last year and how it wowed everybody with its striking good looks in that vibrant orange colour and the Indian Kalamkari design elements within. Skoda, kept its promise of launching the VISION IN, in 2021, as part of its India 2.0 project, and has gone and named its latest offering – Kushaq which means Emperor or King in Sanskrit. The Kushaq, is all set to fight a mighty battle and take on its rivals – Hyundai Creta, Kia Seltos, Nissan Kicks and Renault Duster, in the Indian SUV market. We got behind the wheel of the Kushaq, to find out about its aristocratic ways. Did we come away impressed? Read on and thou shalt be enlightened. 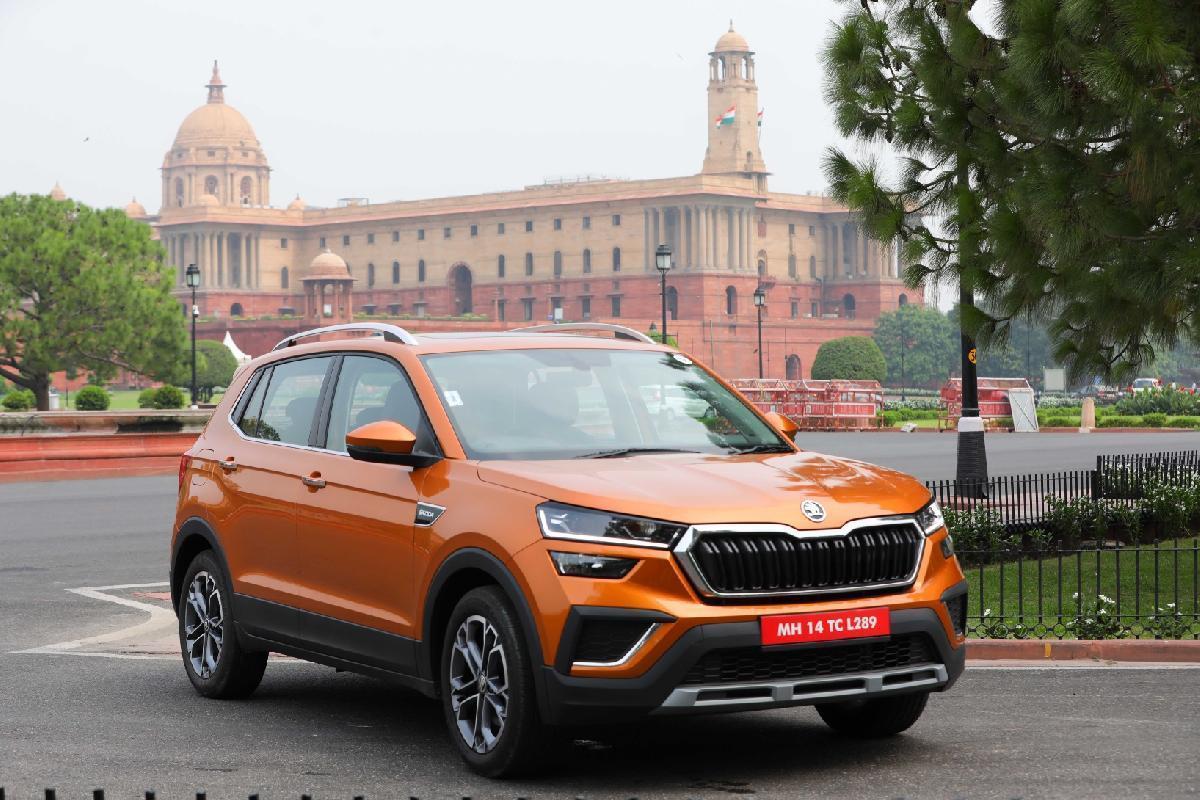 When you first lay your eyes on the Kushaq, you’ll immediately notice the distinguished Skoda lineage and the striking family resemblance that Skoda is so proud of which its designers carry forward on all their designs irrespective of the body style. This comes across through the Kushaq’s black ribbed grille which has a tastefully designed wide chrome band outlining it. Also, the angular headlamps (LED) truly stand out on the Kushaq. A hint of chrome is also seen on the air dams, just below the fog lamps and also on the windows which looks especially appealing in the way it curves on the C-Pillar. Also, what is unmissable are the crease lines and cuts, not just on the bonnet but also the ones that run from just below the A-Pillar to the C-Pillar that add a classy touch to the SUV’s looks. We especially liked the way in which Skoda’s designers have been beautifully designed them to run across the fuel lid. 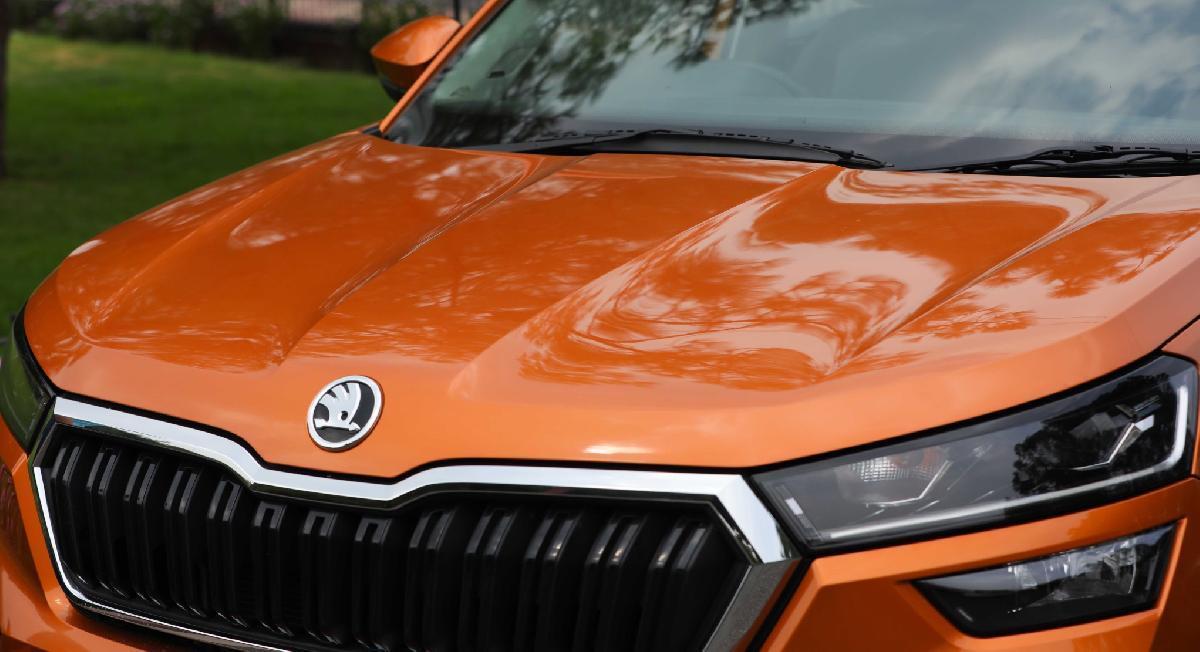 Then there is the skid plate in a matte silver finish which has been neatly integrated into the front bumper, just below a mesh grille, which looks really stylish. This skid plate, is a clean design, and we especially liked the fact that it is not a really bulky skid plate that is often seen on “wannabe SUVs”. This and the roof rails come in the same matte silver paint finish. The roof rails are functional and can carry up to 50 kg weight, so the next time you want to plan that outdoor trip, fret not, you will easily be able to carry that mountain bike of yours atop the Kushaq. 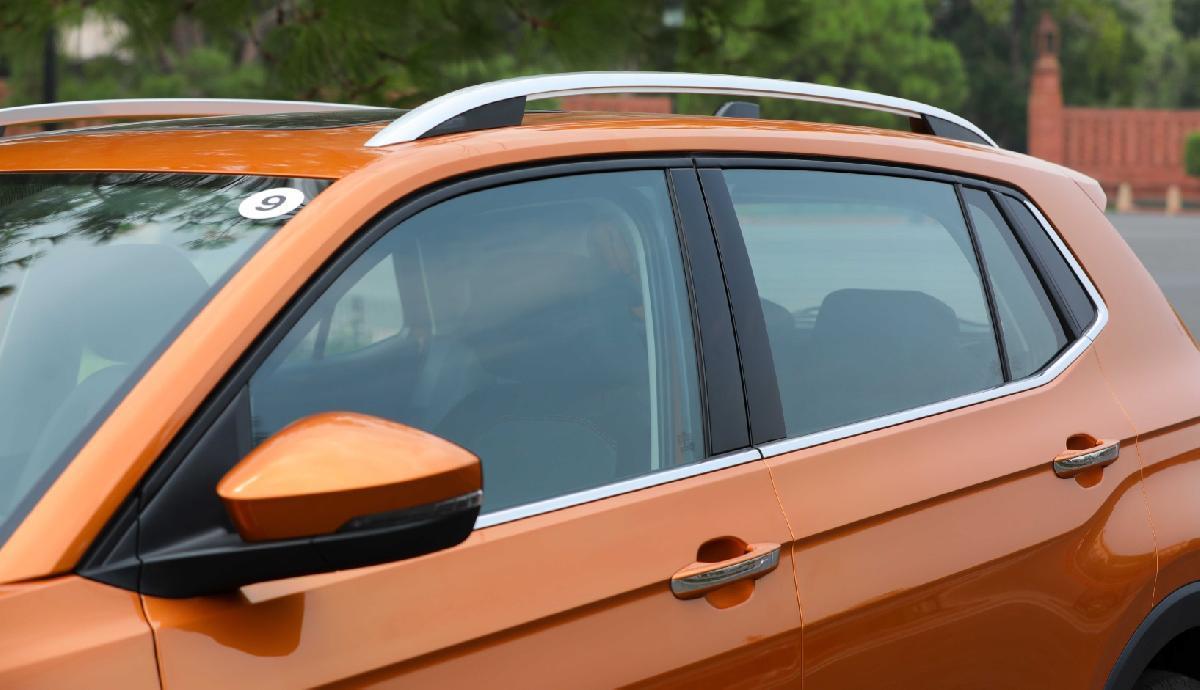 On the fender, near the wheel arches you’ll see the Skoda badging in black and silver which is a very European touch on the Kushaq. The door handles are not body coloured but get a chrome finish in keeping with Indian’s love for chrome. At the rear, the Kushaq gets a shark-fin antennae and a beautifully integrated spoiler. The Skoda lettering is flanked by gorgeous tail lamps and you truly have to see them glow to be able to fully appreciate their function, design and quality. 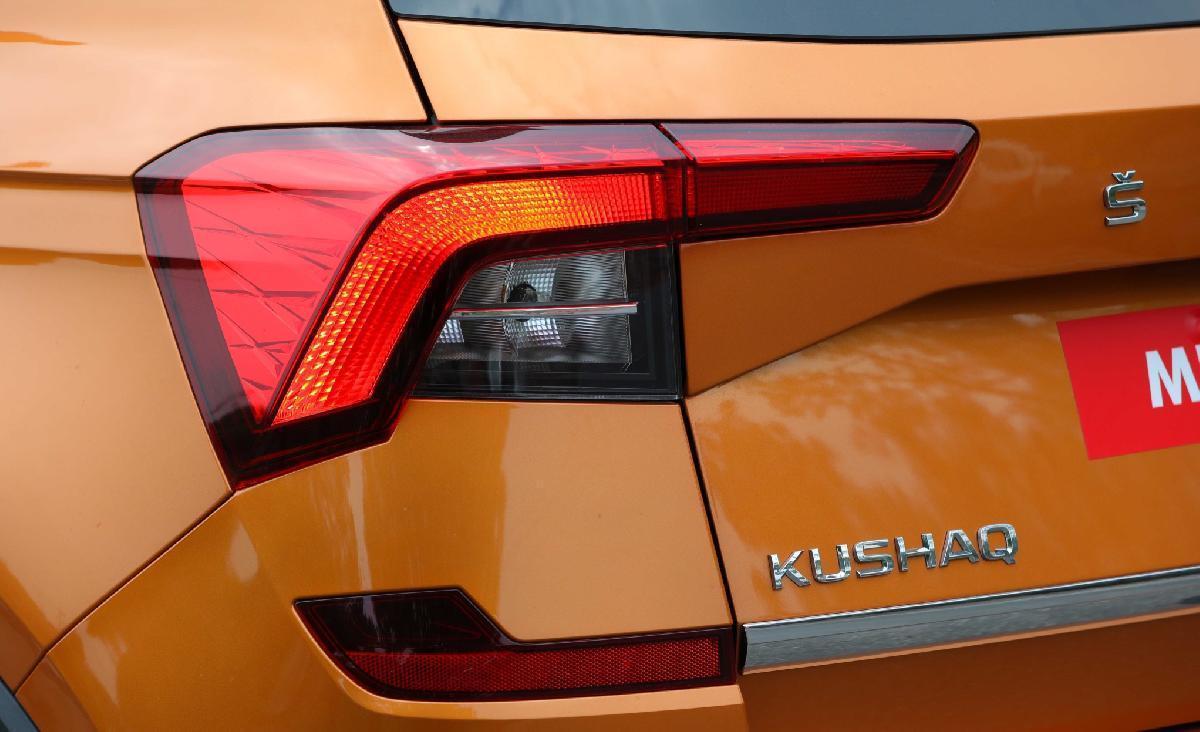 The tail gate also gets a chrome band that sits just below the badging, which further adds to the premium look of the Kushaq. The skid plate at the rear is a great size, neither too large nor too small and that also further lends to the refined looks of the Kushaq. Though the boot capacity isn’t the largest with 385-liters, rest assured, it can accommodate quite a bit of luggage. The 17’ alloys bring a dash of sporty appeal to the sophisticated SUV and complete its urbane look. 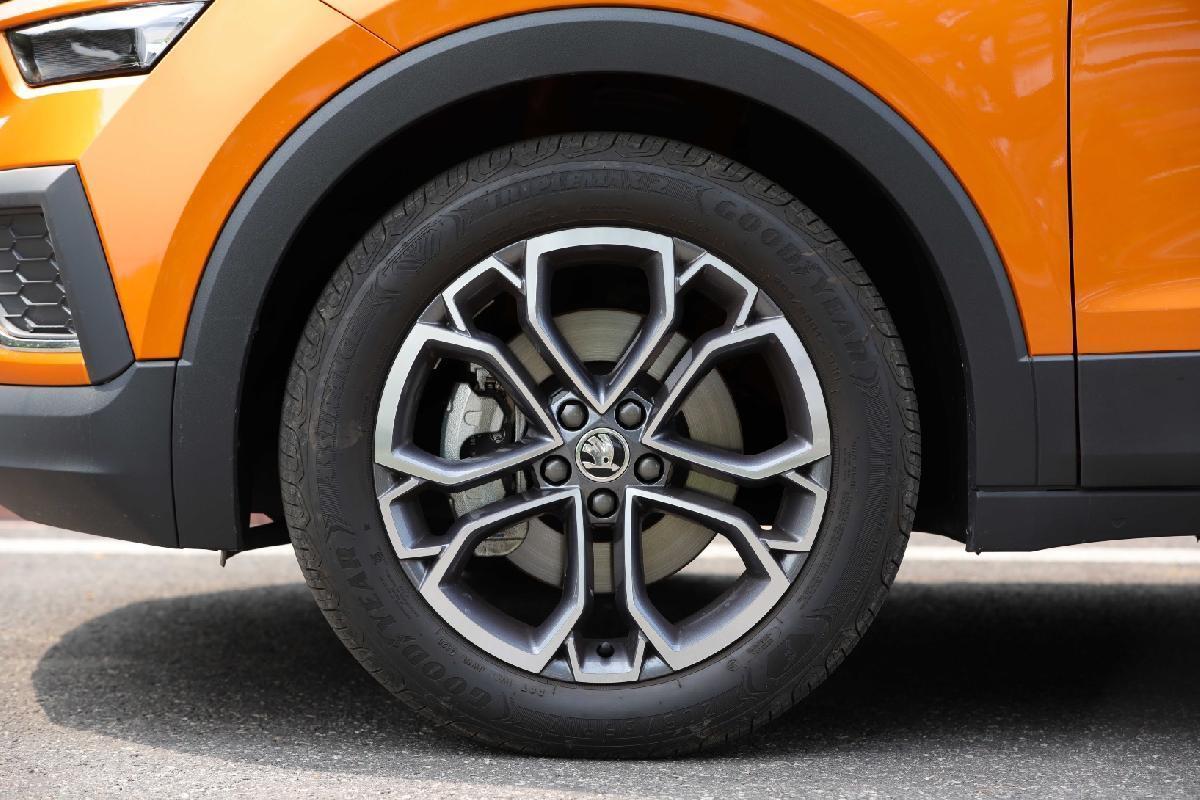 Inside, everything is made of very good quality, barring just two bits, the fabric liner on the roof, which we hardly pay attention to on a daily basis and the hard plastics around the door which could have been of a better quality, but barring these two details, everything can be described in just one word – classy. The first thing you notice on entering the Kushaq, besides the gorgeous scuffplate that lights up in a beautiful hint of orange. 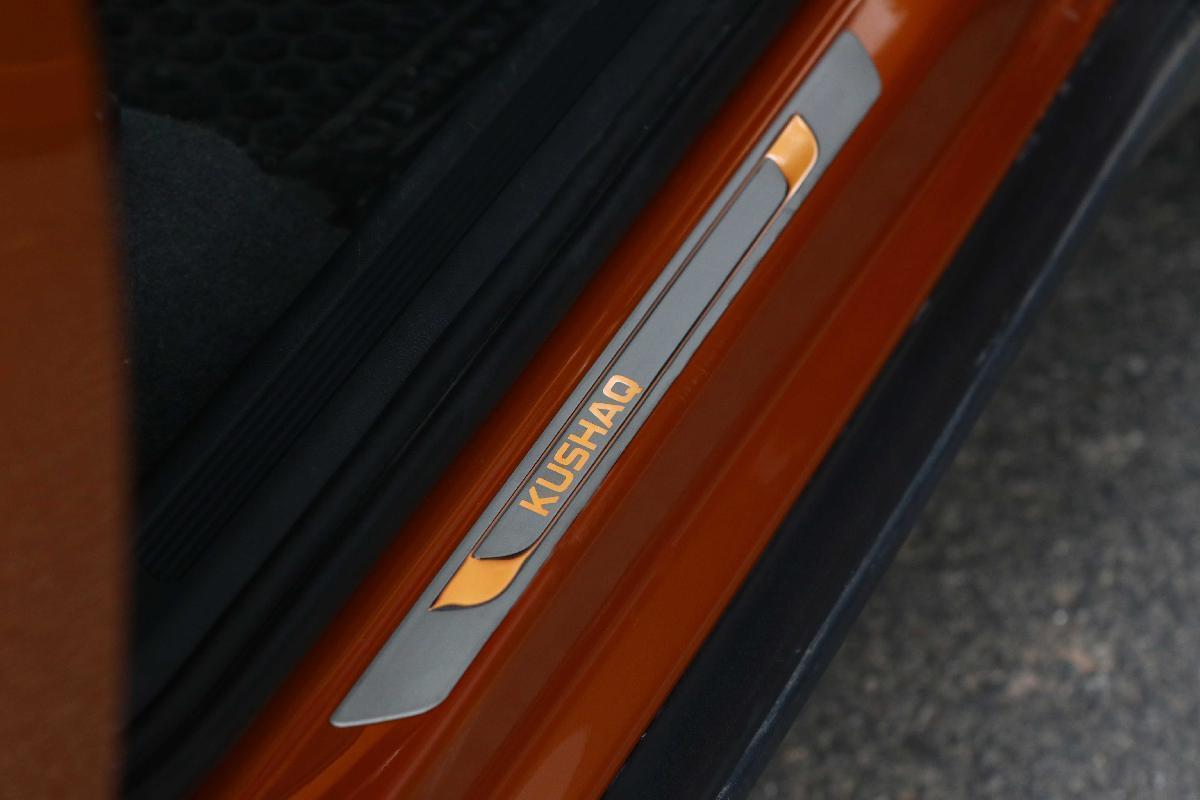 Next, is the beautiful double stitching on the really well contoured seats. Unlike most carmakers who have over the years given us red stitching, Skoda designers have given us a beautiful yellow double stitching which looks really fresh on the grey perforated faux leather seats, which get two shades of grey. 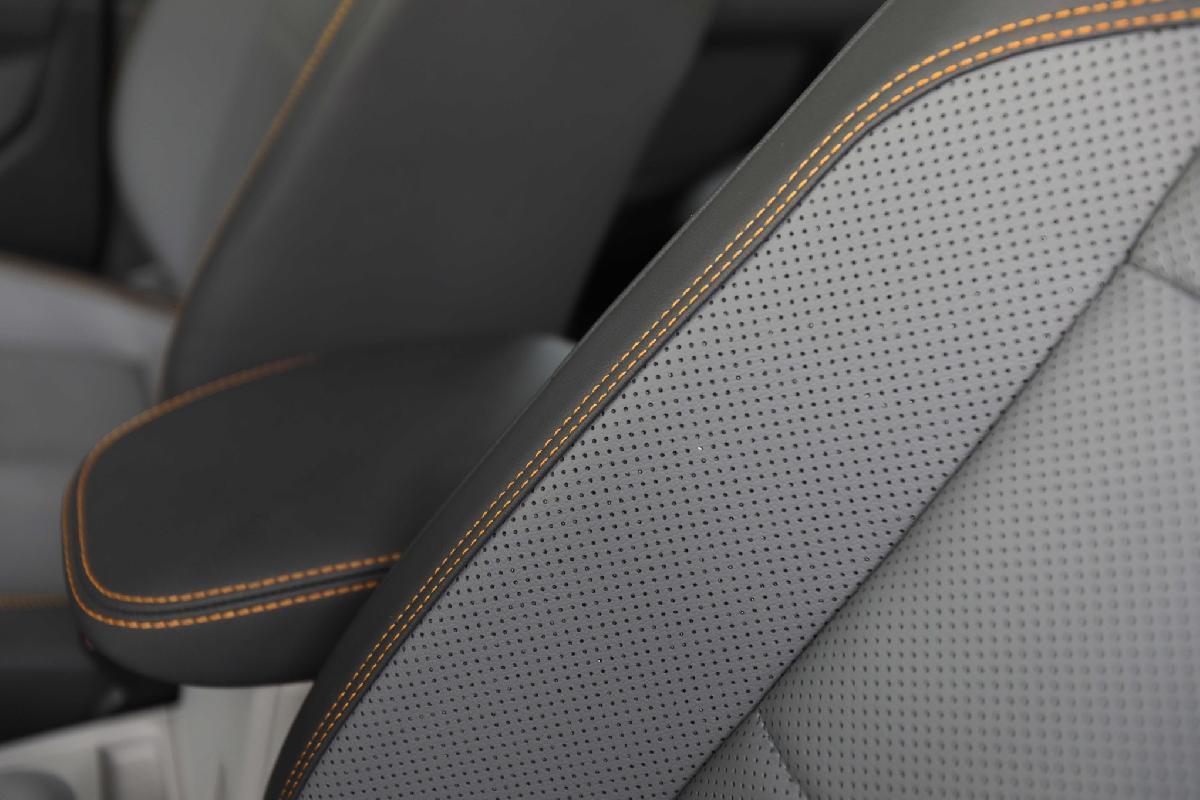 There is enough space in the rear for two adults to be seated really comfortably and while it can accommodate a fifth passenger, it would be best if the fifth passenger is a child who won’t take up too much space. The transmission tunnel, though present, isn’t really obtrusive and won’t get in the way of your comfort. The arm rest behind comes with two cup holders and is comfortable enough for your arms to rest on during those long drives. 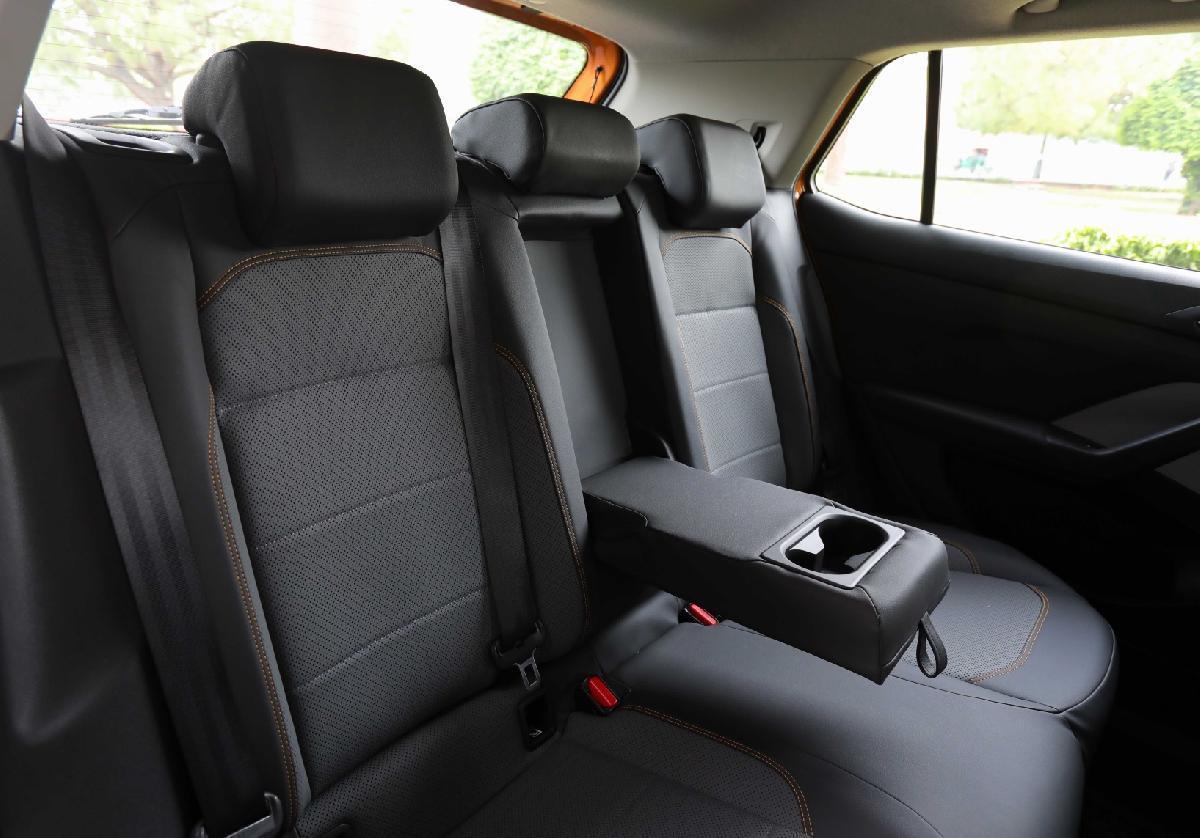 The electric sliding glass roof and the overall use of glass inside the Kushaq gives the SUV a spacious feel. 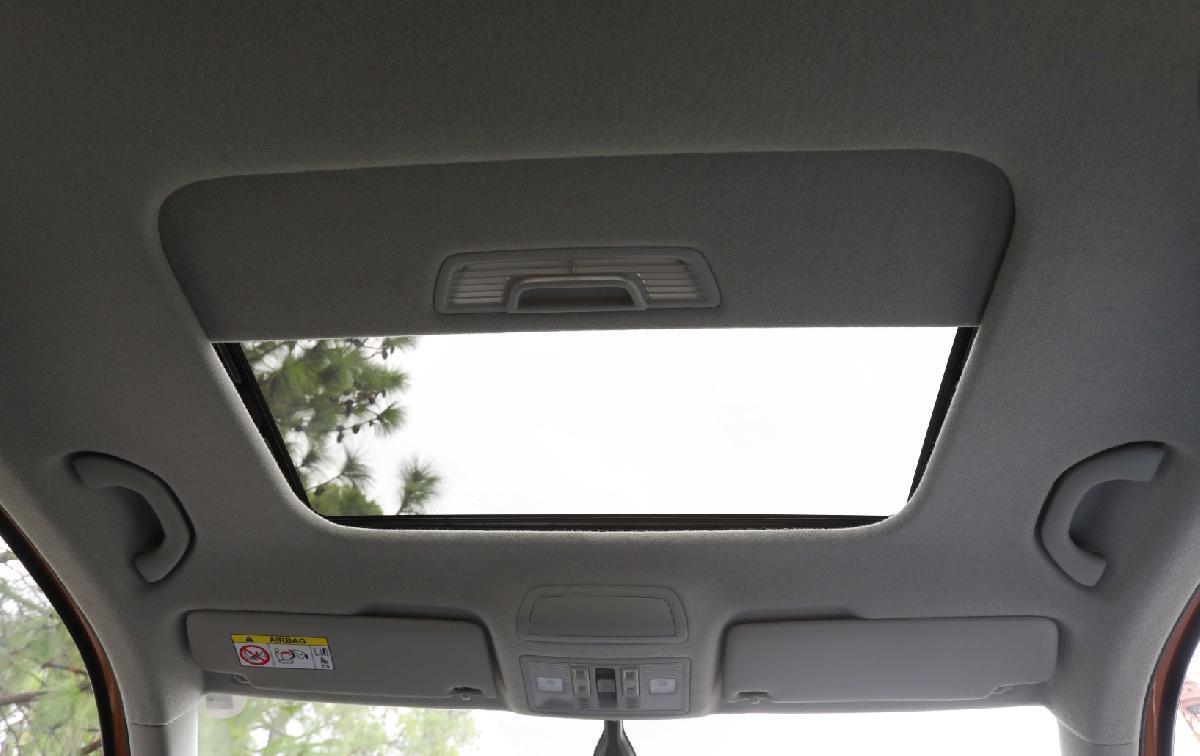 The designers at Skoda have displayed their fine taste in design by using different textures inside the cabin as well as different materials to enliven the space within the Kushaq, especially the dash. The manner in which plastic, leather and chrome have been used on the dash in colour combinations of grey, black and silver really make the cabin quite a nice place to be in. The air-conditioning did a great job in Delhi’s sweltering temperature of 41 degrees Celsius, throwing air for what seemed like some pretty long distances inside the cabin, thereby keeping us really cool as we negotiated the roads of the Capital. We especially loved the design of the air con vents, both on the driver’s and the passenger’s side. While the glove box isn’t extraordinarily large it is spacious enough for your EDC. (Every Day Carry). 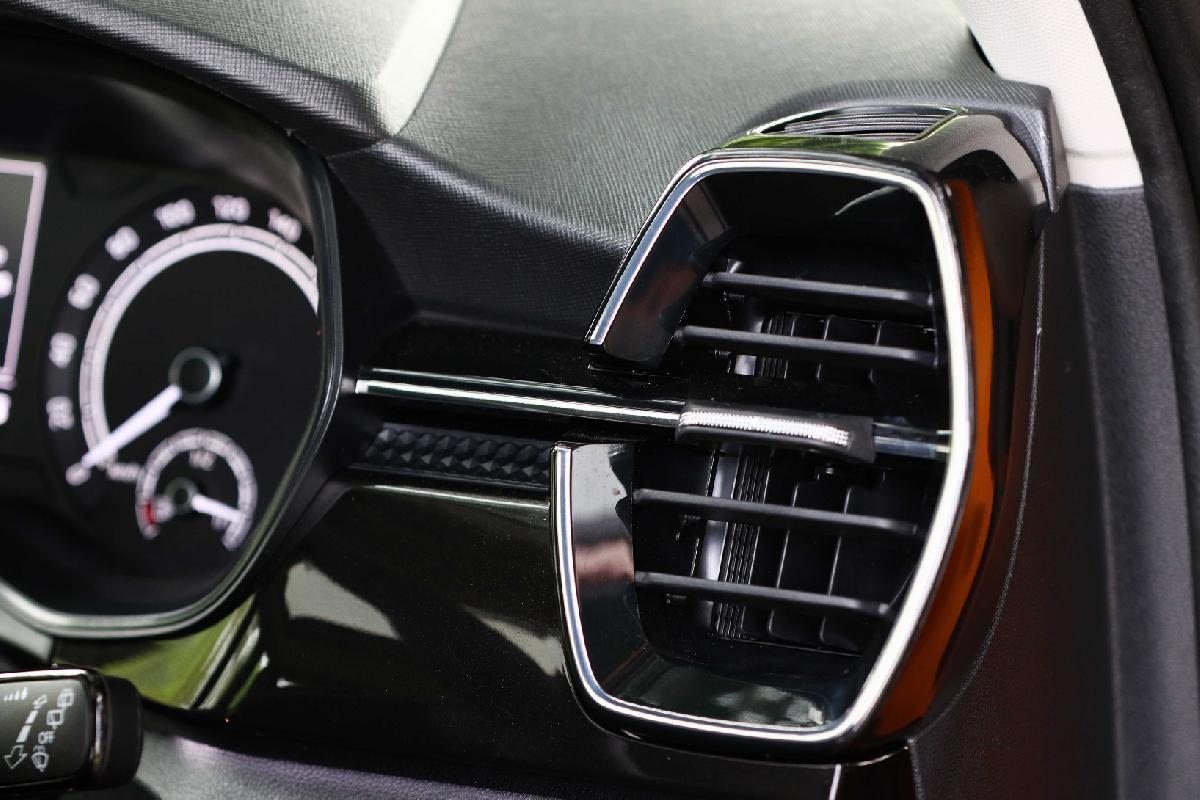 The 10-inch infotainment system is sleek, well-positioned, comes with pre-loaded Apps such as Gaana and others that can be downloaded from Skoda’s own MyŠKODA App and is a breeze to use. The music system on the Kushaq with six high performance speakers, tweeters and bass speakers also comes with a separate amplifier and subwoofer.  is also developed by Skoda, in-house, and does a fine job thereby, not really disappointing audiophiles. 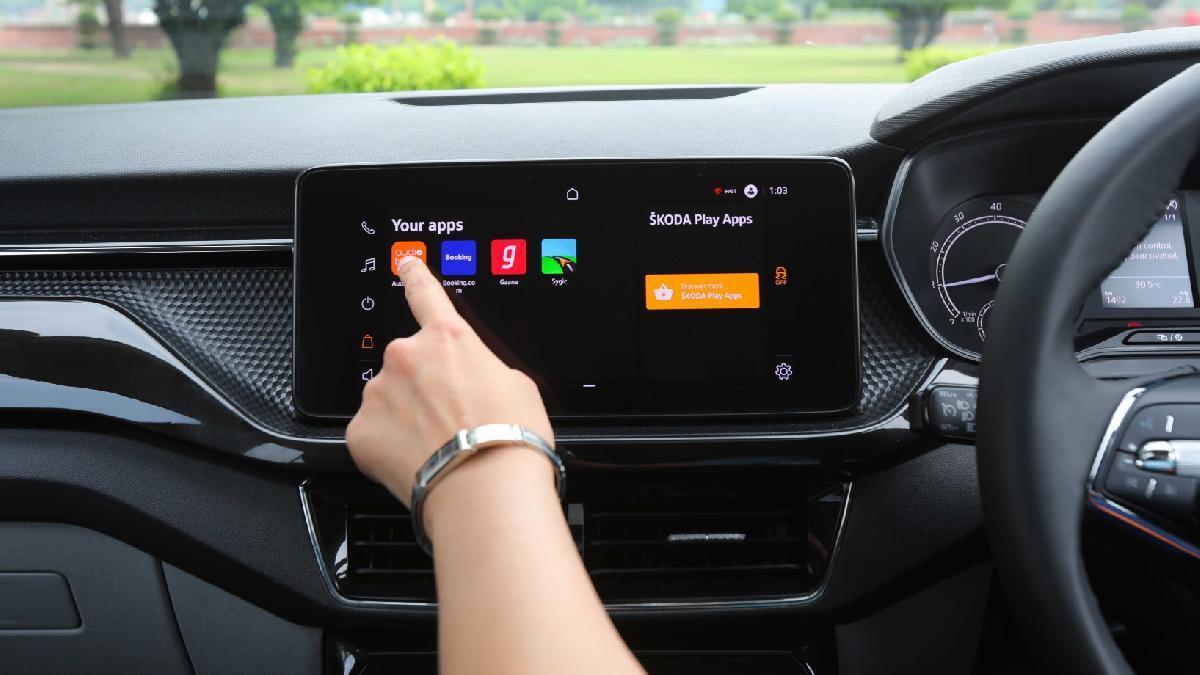 The white dials are simple and easy to read and offer a plethora of useful information. The steering is a two-spoke one, instead of the traditional three-spoke steering that we’ve been accustomed to over the years and it’s a nice change which doesn’t give it a clunky look. The steering mounted controls are made of excellent quality materials and really enhance the driving experience of the Kushaq. 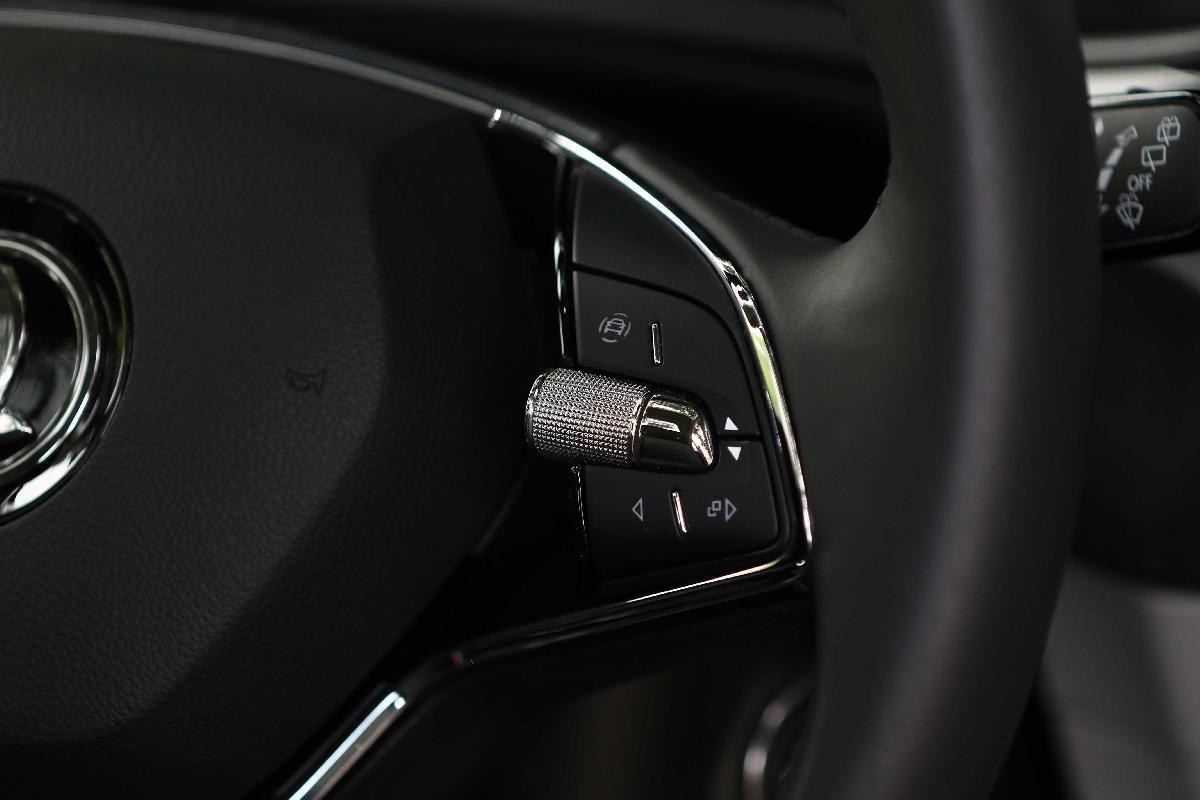 We drove the 4-cylinder, 1.5-liter TSI mated to the 6-Speed manual gearbox, with a power output of 150 PS, delivered to the front wheels. This 6-Speed MT has some of the smoothest gearshifts out there and is sheer joy while driving both, within the city as well as on the highways, with fewer gearshifts, thanks to the tall gearing. Clearly, with Skoda offering some of the finest gearboxes over the years, this one is no different with no sign of notchiness whatsoever. Whether you’re ambling on the city’s streets at low speeds or require that surge of power, the Kushaq, delivers flawlessly. There are also some “simply clever” bits on the Kushaq such as the cylinder deactivation technology, for instance, which shuts off two cylinders when the extra power isn’t required (While you’re coasting) and what that results in basically, is better fuel economy. The Kushaq, is big on comfort with both, its ride and handling, sorted. Comfortable on most road surfaces with a pliant ride quality and with a steadfast grip while cornering at even high speeds, the Kushaq, feels well-planted and you can barely feel any body roll at all. 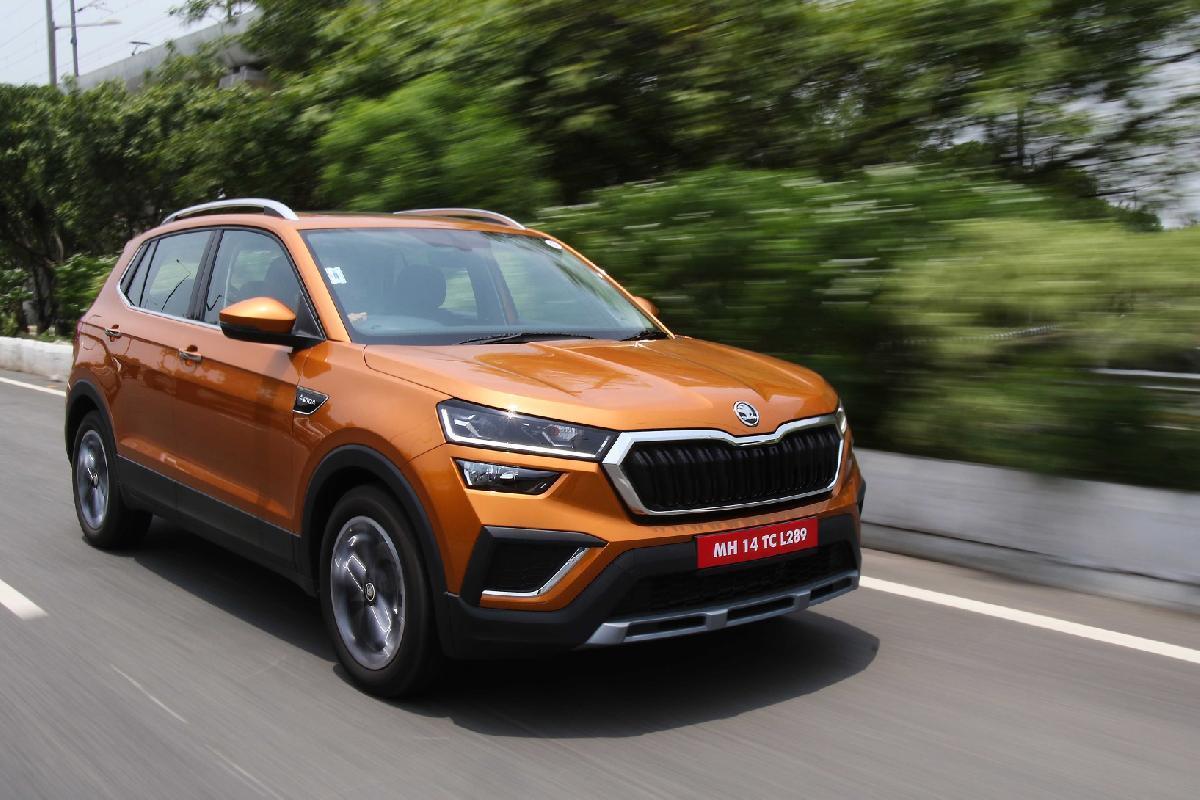 In terms of safety, the Kushaq, comes with Anti-Lock Braking System, Electronic Brake Force Distribution, Brake Assist, Traction Control System, six airbags, rear parking sensors, a camera – the works. Skoda has also put in yet another “simply clever” feature here – Brake  Disc Wiping which is a special technology that wipes the disc brakes and keeps them free from grime, water and dust. Just another way of Skoda ensuring that the occupants stay safe within the robust Kushaq. 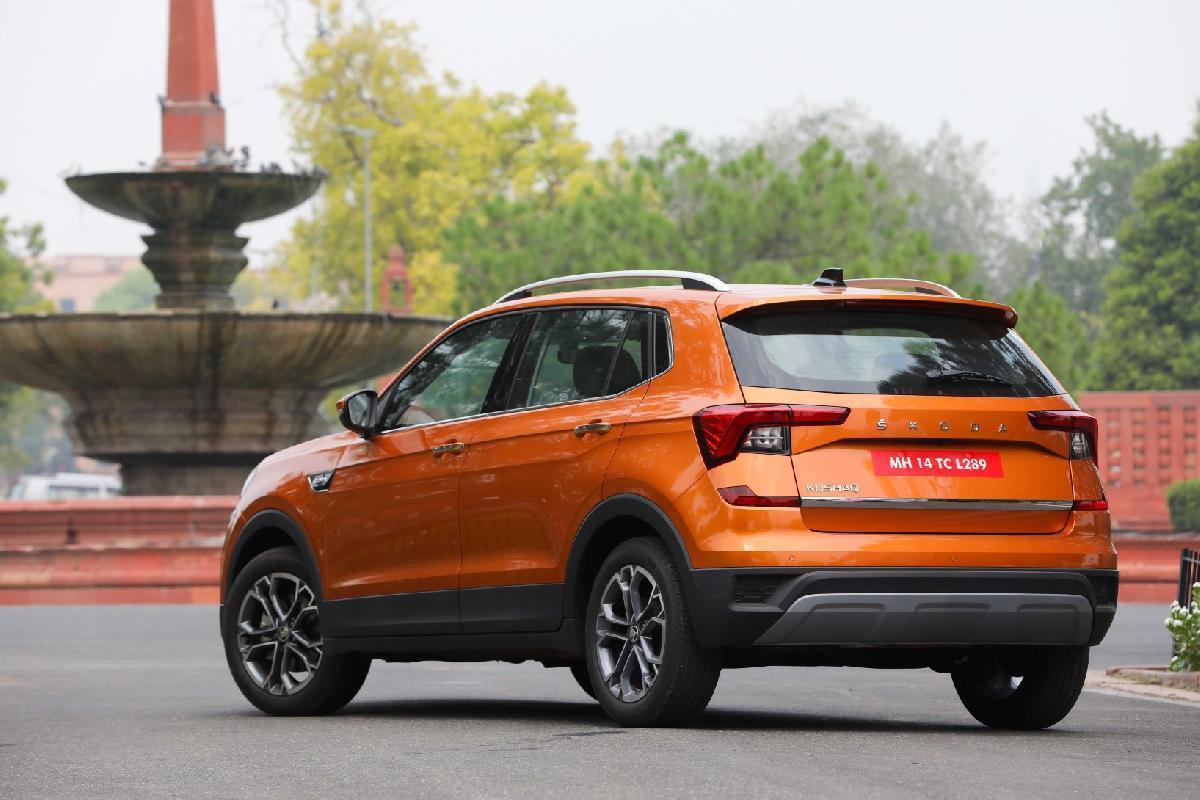 Overall, the Skoda Kushaq makes for a great buy. It is big on looks, performance, ride and safety. Also, that Honey Orange colour which has gone through a few changes based on customer feedback, from what was displayed at the Auto Expo, last year, is really quite a unique colour that would fit in easily with our colourful Indian landscape. So, if you're in the market for something sensible that isn't too radical but is practical and offers great driving pleasure, in the INR 10 lakh and above range, don't forget to check out the brand new Skoda Kushaq. With 3 years paint warranty, 6 years corrosion warranty, 2 years battery warranty, 2 years parts warranty, and 4 years/100000 kms warranty that can be extended up to the 6th year or for 150,000 kms, Skoda has really thought this thing through, making the the Kushaq truly fit for a King.