Want to unleash the wanderer that resides within you? Jump into the Jeep Meridian. With its go anywhere ability, you’ll be glad you chose it as your traveling companion.

Recently, in Chandigarh, we were blessed with an SUV that kept us really cool inside as we negotiated corners and tackled rugged terrain in the scorching heat, with the sun doing everything in its power to scald our skin completely. However, we were behind the wheel of Jeep’s brand-new Meridian, and frankly, it had almost instantly put us in quite the “Rising mercury be damned” mood. Needless to say, we were completely blown away with the performance of their latest offering! These are the set of wheels you want to own if you’re looking for some crazy adventures with family and friends in a seven-seater SUV, and of course, have the moolah! Sure, there are other competitors out there such as the Toyota Fortuner, the Skoda Kodiaq, and the MG Gloster, but with Ford now having wrapped up its India operations and with their extremely capable Endeavour no longer in the competition, you’ll see for yourself why the Meridian makes such a strong case for itself. And believe us when we say we are not exaggerating! 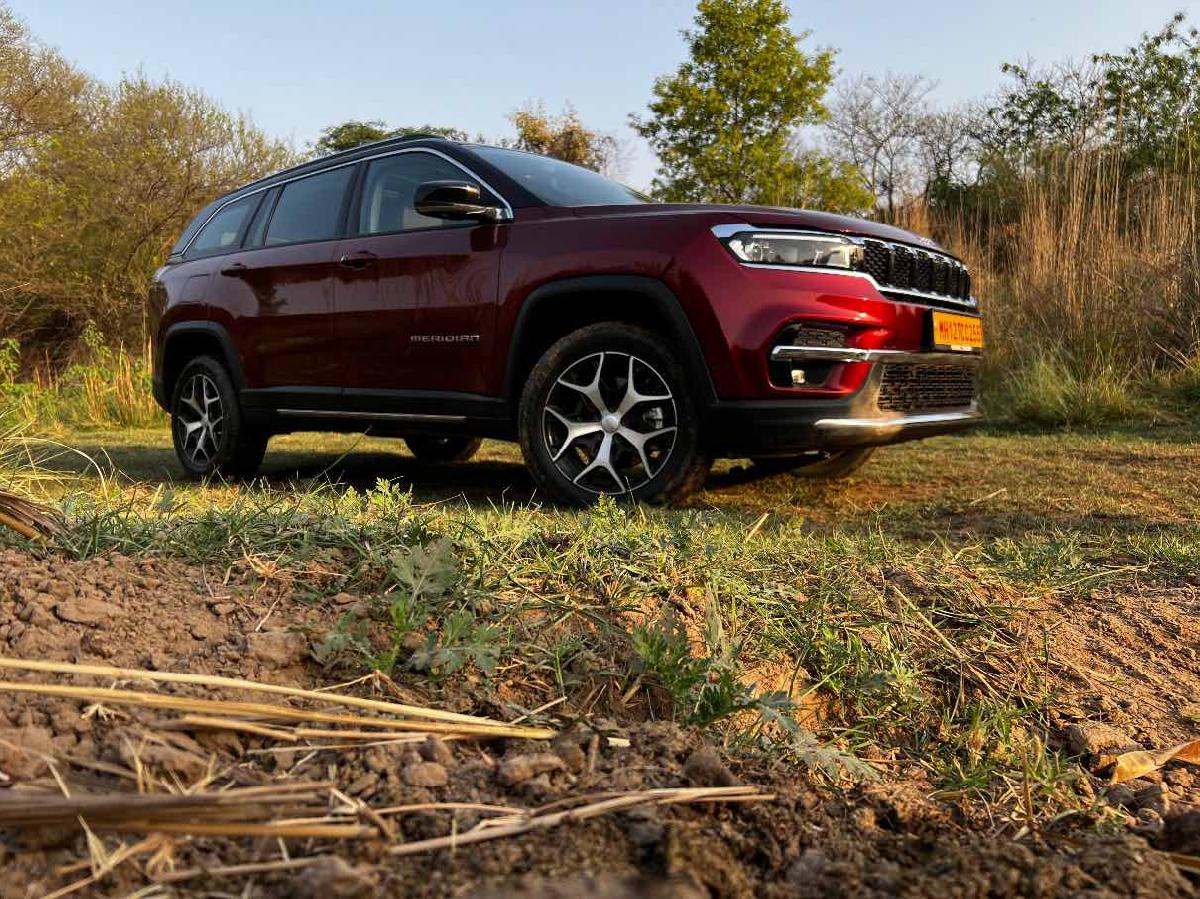 First things first – the looks. When you see the Meridian, you instantly know that this follows in the footsteps of the brand’s other iconic vehicle – the Grand Cherokee. Also, in India, it borrows elements from their previous model, the Compass, which has been a huge success, and in fact, also received some significant updates last year. And so, what you see now may well look like a larger model of the Compass to many, but is in fact, one that can not only seat seven, but also handle off-roading duties with aplomb. As for us, we’ve been fans of those squared off wheel arches since we saw them on the Compass and loved them on the Meridian too. That along with the large scoop on the bonnet only add to the Meridian’s handsome looks. Then there is the Jeep’s distinct front grille which is flanked by slim LED projector headlamps that gives the Meridian a very modern look. The chrome used on the Meridian adds a glint to the front fascia, especially when seen in the sunlight but is well balanced with the black bits and they both give the Meridian a very premium look. The mesh design on the grille and the air dam furthermore makes everything on the Meridian look really clean and tidy. What is striking in terms of design is how the housing of the fog lamps seems so much larger than the headlamps, but it is only on account of the cavity that makes it look large, the fog lamps though, are proportionately sized. Nothing significant on the side, besides the black cladding on the doors, but what you can’t miss, of course, is the large glass areas on the Meridian, but then, that is expected on an SUV this size. We also loved the diamond cut alloys that came with R18s and felt that they looked super stylish on the Meridian. The rear gets a large chrome band that is flanked by slim and really sophisticated-looking tail lamps. There is some chrome below as well and the faux metal skid plate also adds to the Meridian’s rugged looks. Also, on offer is 170-Litres of bootspace with the third-row seat in place. If you want to free up additional boot space, you can do so by folding the third-row seats up. 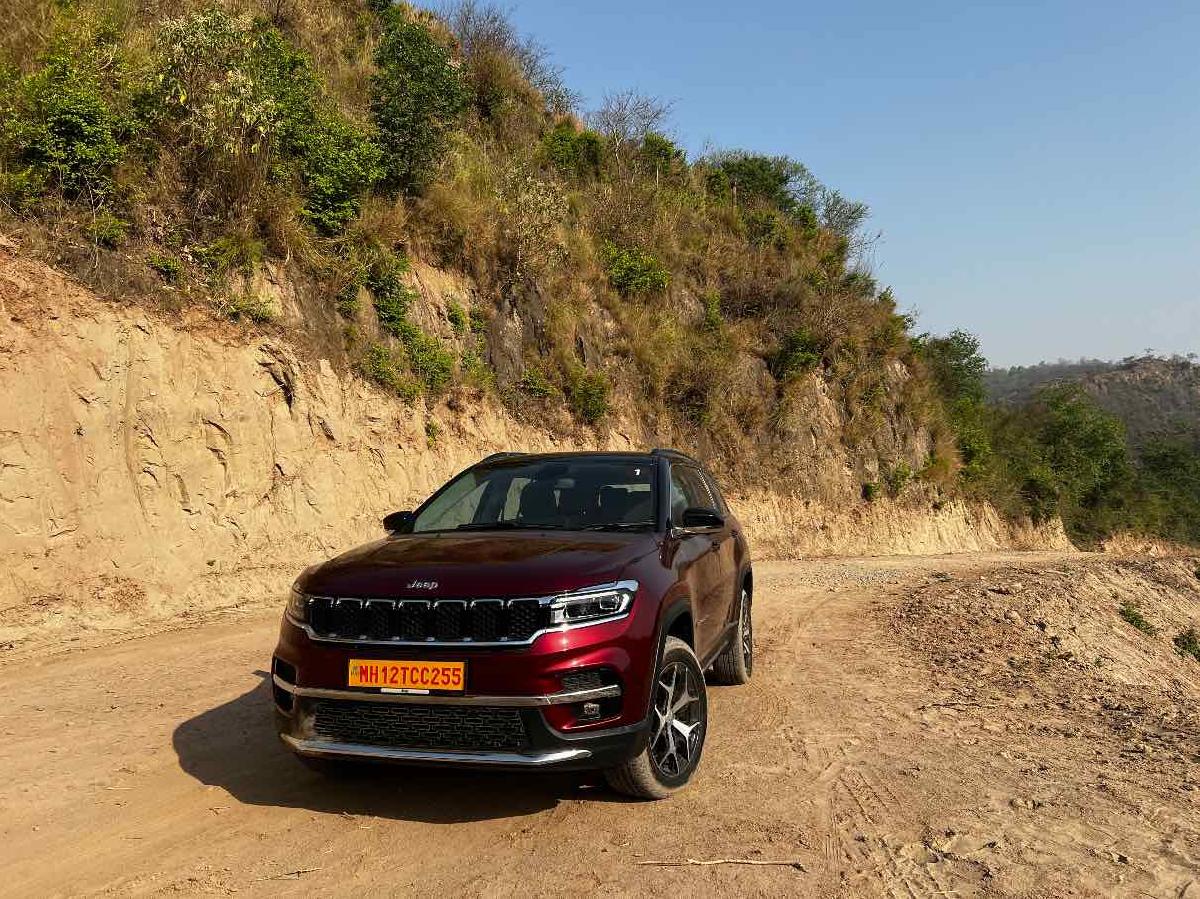 Inside, the cabin feels extremely premium with some really good fit and finish. The two-tone dash (mocha and black) feels rich and the satin silver strips running across the cabin blend in beautifully with the leather, wood and piano black bits. The buttons and knobs are well-sized and everything from the quilted ventilated seats to the gear lever feels like you’re cocooned in the lap of luxury. The 10.1-inch infotainment system (which features Apple CarPlay and Android Auto) as well as the 10.25-inch instrument cluster have sharp displays, are intuitive and easy-to-read as well. There’s also a 360-degree camera – a very useful feature, especially when you’re driving inside the Siswan Forest, Chandigarh, like we were, on a dirt track specially created for us to experience the Meridian’s full off-roading capabilities, and where we were told that wild animal are always on the prowl. What we really liked besides the large panoramic sun roof is that the second row as well as the third row come with reclining seats. Now, while travelling in that third row is best suited for children or young adults, Jeep, has ensured that the cup holders and the air-con vents add a nice touch to make journeys even more comfortable. However, it is the Meridian’s second row that gets our thumbs up, “if” you’re not in the driver’s seat. 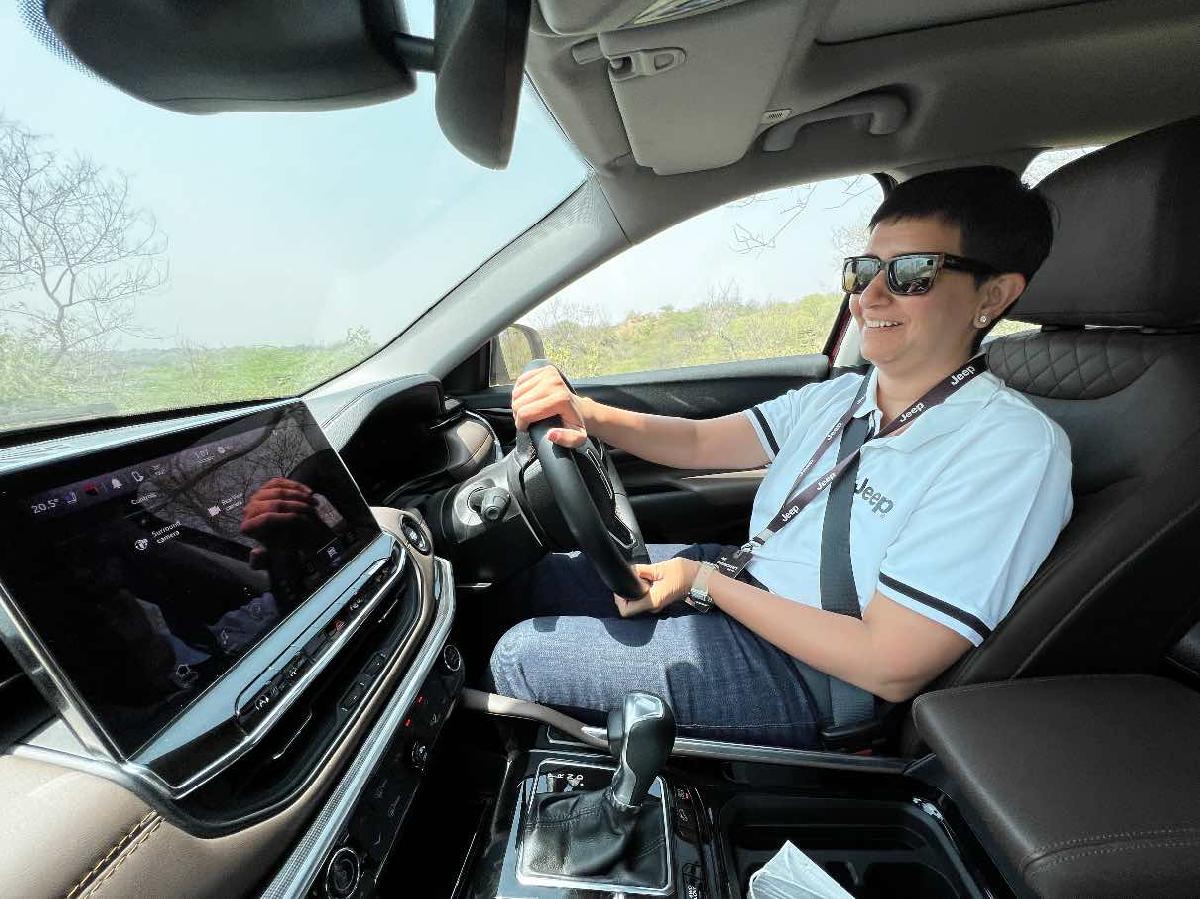 The Meridian gets the 2.0-Litre diesel engine that comes with a 6-Speed MT and a 9-Speed AT (which was the one we drove) and which puts out 168bhp and 350Nm of torque. On the dirt track, inside the Siswan Forest, we got to experience a few of its modes Mud and Auto. We also used the 4WD Low and 4WD Locks on some extremely challenging terrain and concluded that the Meridian is a fabulous vehicle to own, especially for all those out there who crave the outdoorsy, active life that involves a lot of driving on different kinds of surfaces– tarmac, mud, sand, etc. Those who love to get away on the weekends and just head off into the wilderness, camp out beneath the sky, indulge in some barbecuing and stargazing and next morning set out to explore another camping spot, it is exactly for people like these that the Meridian has been built. And whilst in the jungle, we were pleasantly surprised by all that this 4769mm long Meridian can actually do. This is the sort of vehicle that does not weigh you down with its 1890 kg kerb weight whatever precarious angle you’re driving it in, and a lot of that has to do with its brilliant and super light steering. Even if you have one rear wheel up in the air while trying to go over some nasty ditches on mud roads, the Meridian with its 2782mm wheelbase, will confidently carry on without an iota of a problem. And the best part is that you feel absolutely safe inside the Meridian’s cabin, thanks to its robust build quality and 203mm ground clearance. Also, the ride and handling are simply outstanding and you hardly feel any jerks even while driving through the jungle. All in all, we drove through some mud, slush, water and rocks and needless to say, the Meridian didn’t let us down even once. Every single time, the Meridian performed remarkably well, even when we were driving on the highways trying to see if we could better its 0-100 speed in 10.8 seconds. And, not once, did we feel the slightest bit of discomfort or alarm on the inside. 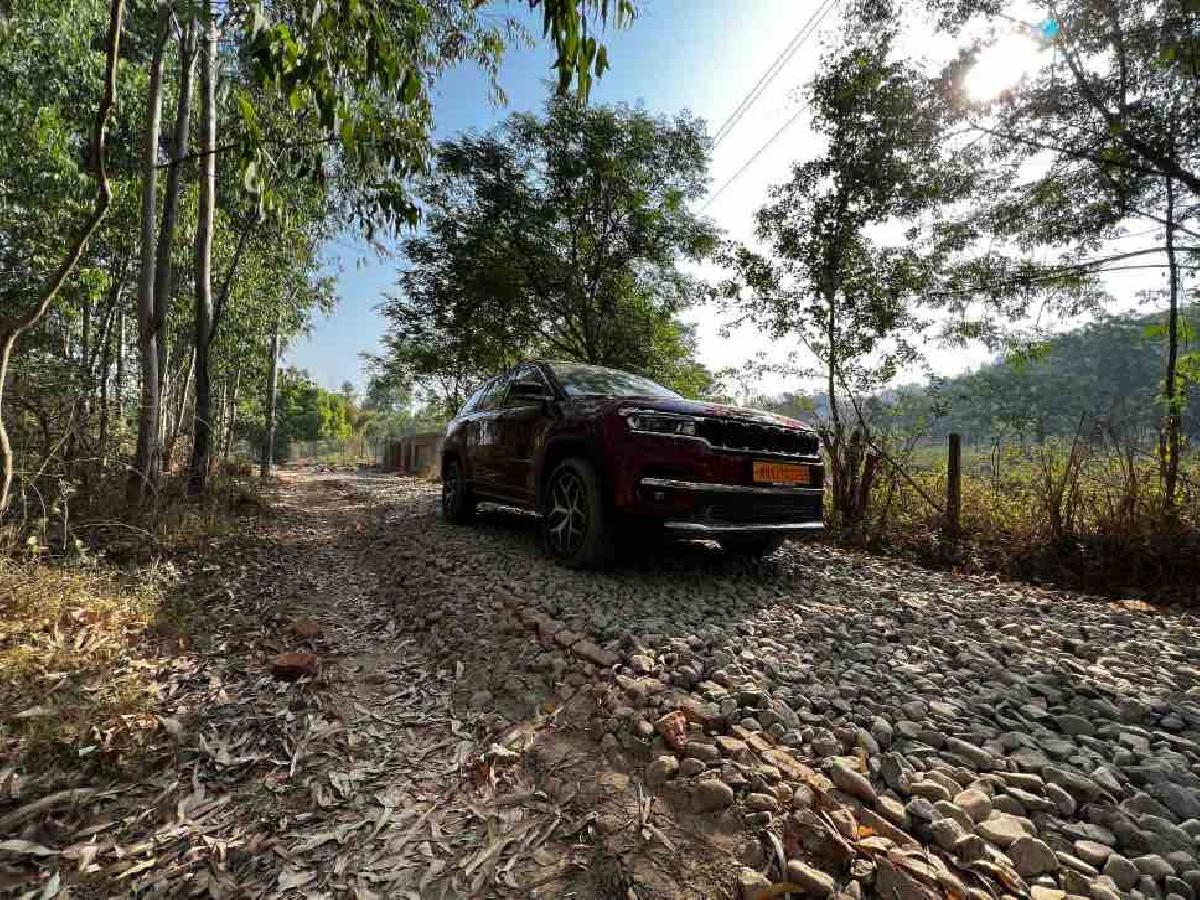 With six airbags, TPMS, ABS, ESC and Hill Hold Start and Descent Assist amongst a host of other safety features, you can be sure that the Meridian won’t let you down. So, if you’re looking for a seven-seater that is sophisticated, capable, and at the same time loaded with some cool features and tech, look no further. Get thee to the nearest Jeep showroom and test drive the Meridian, and you’ll see for yourself the finesse and the outstanding driving dynamics that this SUV has to offer. The prices of the Meridian aren’t out yet but you can expect the Meridian to be priced atleast above the INR 35 Lakh, if not more, as it is a D-Segment SUV. Sure, it may sound like a lot of money on paper, but after spending some time with the Meridian and driving it around, we can be sure of one thing – you will get your money’s worth and will never regret it.

What do you think of Royal Enfield's Hunter 350?