The Honda CB200X is a handsome motorcycle but like they say… “handsome is what handsome does.” Does the new entrant then have what it takes to win hearts? Read on to learn the answer to that question…

Honda’s latest motorcycle, the CB200X, launched recently, will fill the gap between an out and out budget off-roader and a naked motorbike in the Indian motorcycle market. With no motorcycle that sits in between the two ends of the spectrum, capable of weekend touring and soft off-roading, the CB200X should appeal to many who’re looking for a motorcycle that can handle both duties. Now that Honda has brought in the CB200X, let’s find out if it is indeed a capable commuter and that weekend tourer which can also tackle some mild off-roading.

We could not wait to get our hands on the CB200X, dubbed the Urban Explorer, in order to see what it was really capable of doing. First things first. The motorcycle is a looker and certainly lives up to all the hype. Taking styling cues from Honda’s premium ADV range such as the Africa Twin, NC750X and CB500X, the baby ADV carries forward its fine genes. Some may even go to the extent of calling it a beefed-up Hornet 2.0, but we beg to differ. In fact, the golden USD forks and the overall ADV styling of the CB200X gives the ADV a very upmarket and trendy look. In terms of the build quality, most of it is fiberglass, so go figure.

The air passages at the side of the motorcycle add a bit of pizzaz to the styling of it and also contribute to the overall aerodynamic efficiency. The swaged handlebars and the blacked-out windscreen complete the ADV look of the motorcycle. Apart from enhancing the looks, the swaged handlebars are sturdier than the regular handlebars as they are thick at the centre and taper towards the end. The windscreen also offers weather protection and reduces the wind resistance to the rider, making it a useful feature. Honda has provided the CB200X with indicators mounted in the knuckle guards which looks good, however, in case of a fall, you may end up damaging those LED turn indicators. 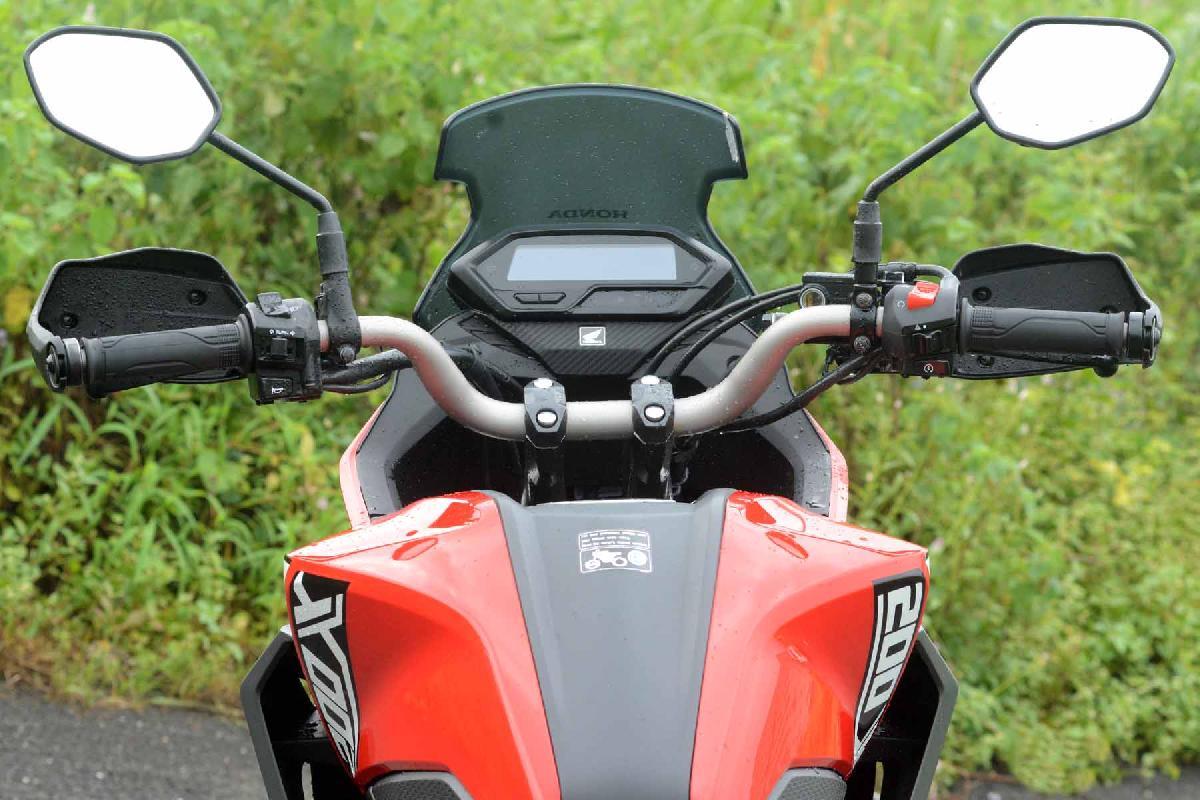 We really liked the instrument cluster which displays a lot of information such as Speed, Odometer, Gear Position, Service Due, Battery Voltage, etc. 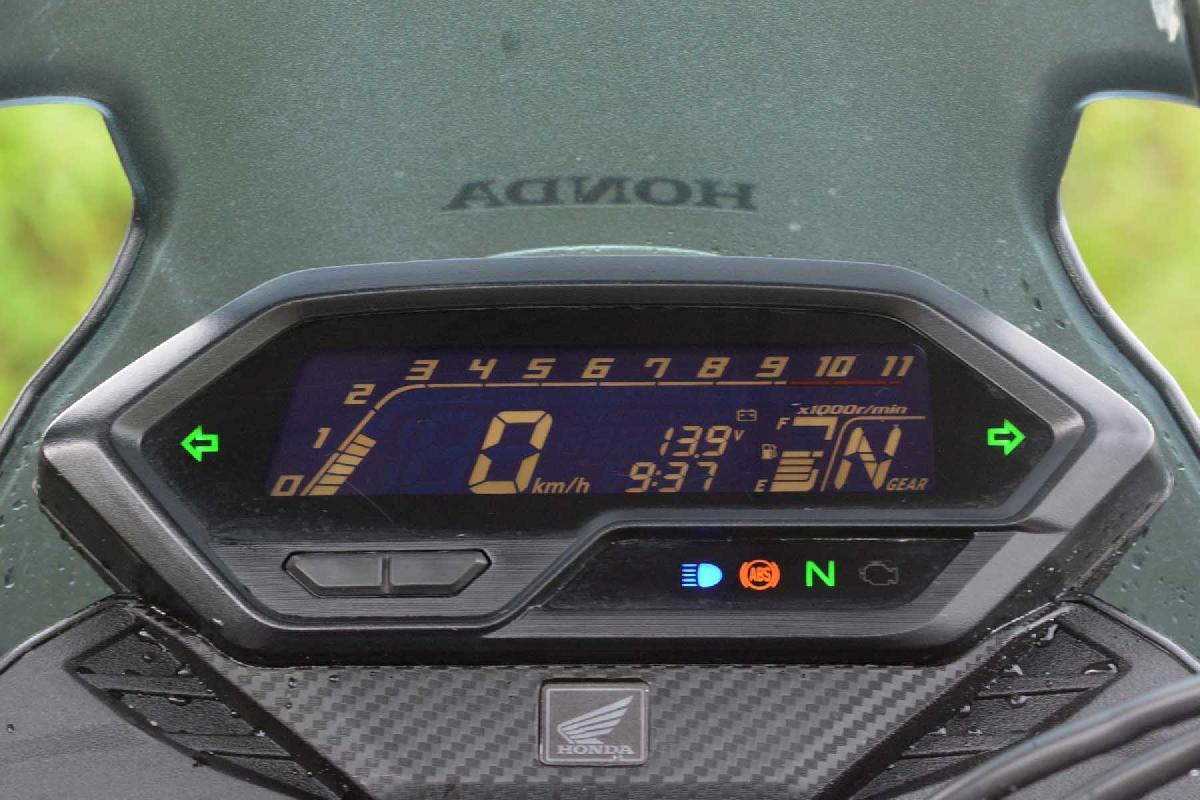 The three levels of illumination also come in handy, however, we do miss the turn-by-turn navigation feature and Bluetooth connectivity. However, Honda has given the CB200X a beautifully designed body and they have also given it a pair of stunning alloy rims which feature a 5Y shaped design that looks gorgeous and complements the overall styling of the motorcycle. At the back, the X-shaped taillight steals the show and offers that superior feel to the motorcycle. 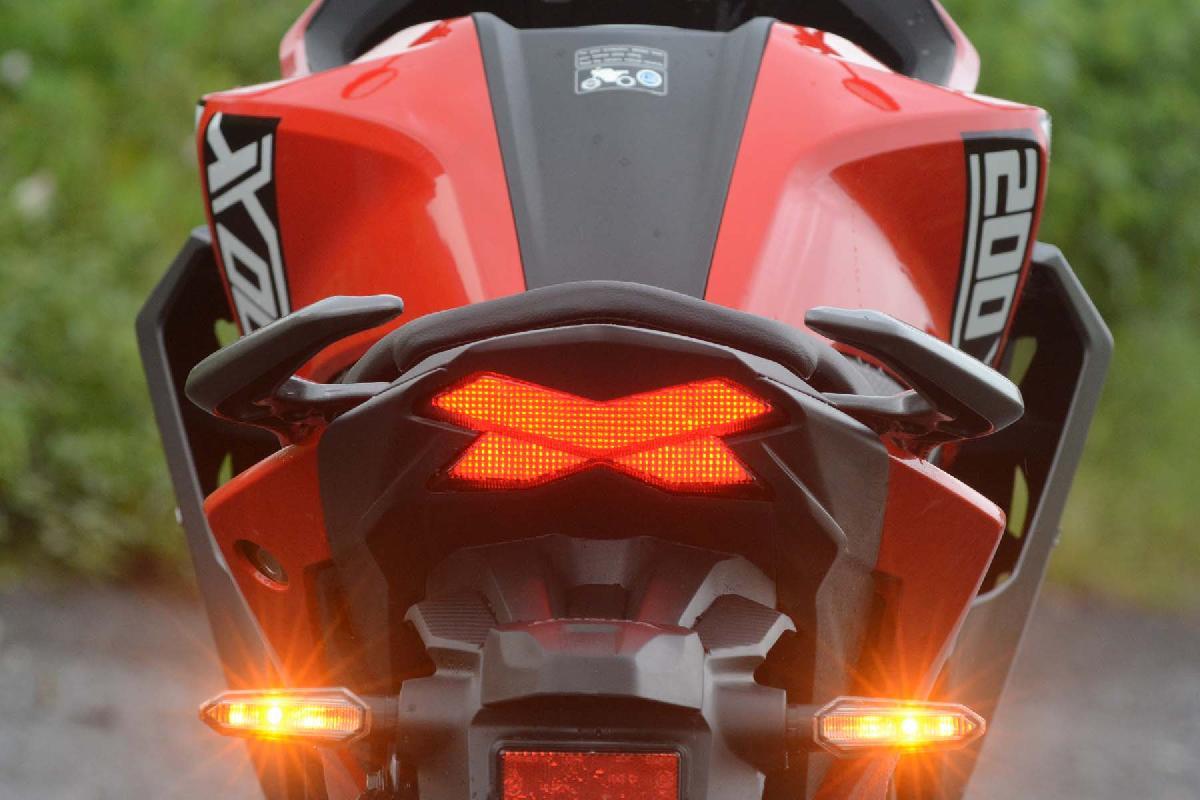 How does the motorcycle ride and handle? Let’s just say that the front brakes are a bit spongy and that the 276mm petal disc upfront needs work as it doesn’t instil much confidence in the rider. The 220mm petal disc at the back has a better feel to it than the front brakes. The Nissin callipers, in our opinion, should have done a better job than what they do now. Honda has also given the motorcycle a single-channel ABS rather than a dual-channel setup. The 37mm golden USD forks and a monoshock with 3 levels of preload adjustability are good and absorb most of the potholes without any difficulties. The 130mm travel of front forks might not be the best for a motorcycle with ADV looks, but they do their job of providing a comfortable ride. Tackling everyday potholes was a piece of cake, but if you get careless, the suspension will bottom out pretty soon and catch you by surprise. 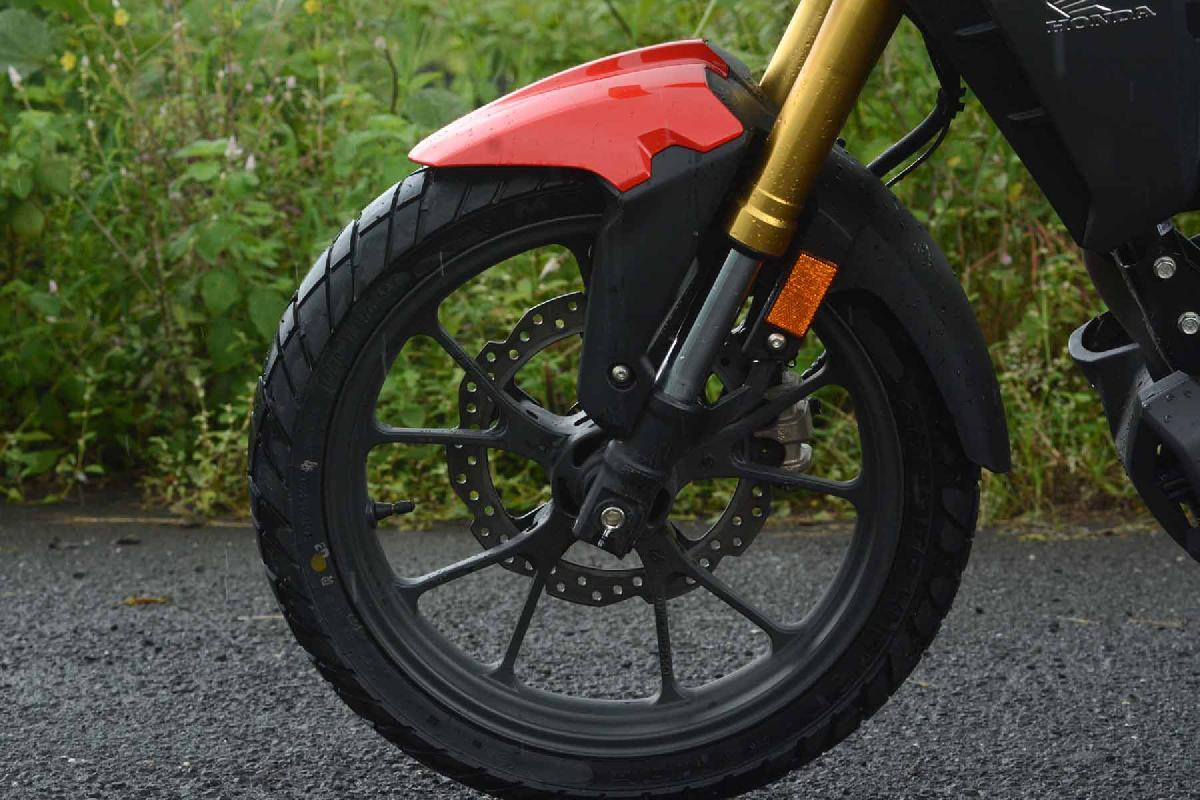 A Diamond Type Steel Frame underpins the CB200X and provides a lot of character to the riding dynamics of the motorcycle. The upright rider’s triangle with mid-positioned footpegs, pulled back handlebars and the 810mm seat height deliver exceptional comfort for the rider and we did not have any gripe with this seating posture except for the seat which we felt was slightly on the firmer side. If only Honda had can give softer seats with the CB200X, it will further sweeten the deal. 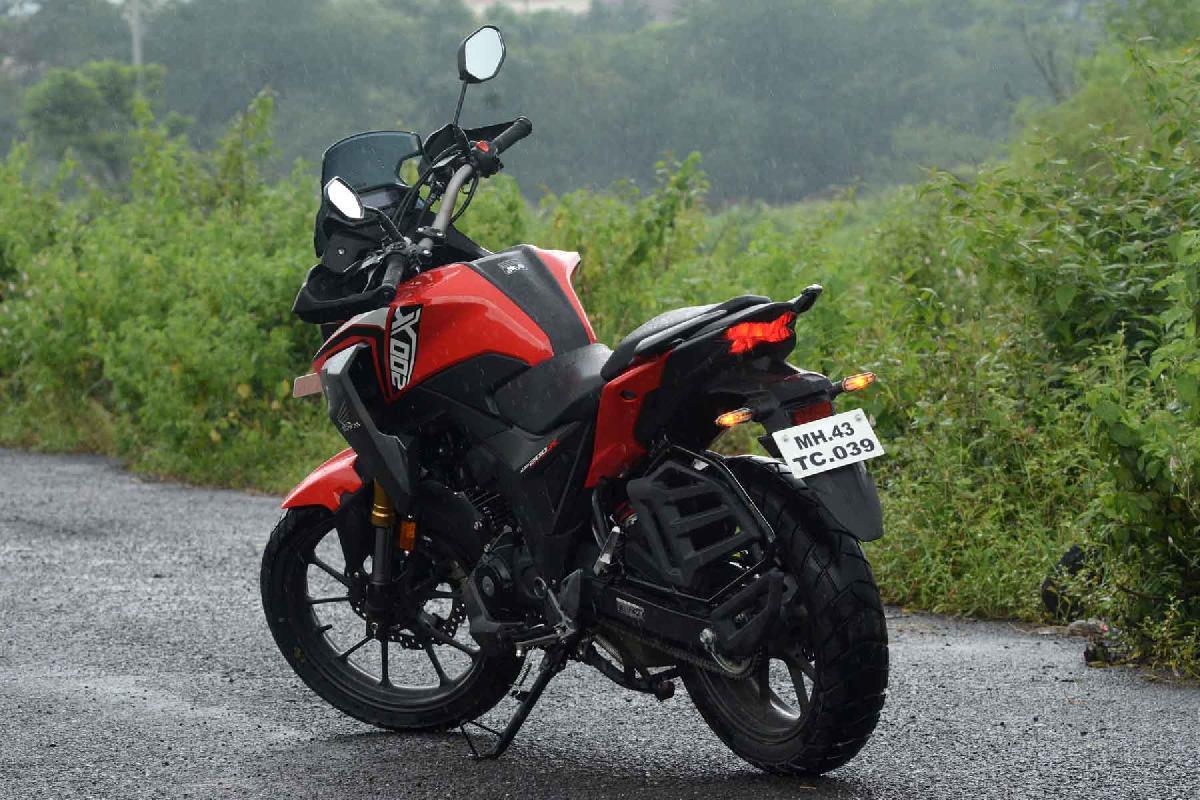 The 184.4cc engine might not make the most power and surely is not the torquiest, but it retains the Honda smoothness and refinement. Churning out 17bhp and 16.1 Nm of torque, the motorcycle does not feel underpowered in the city. But, on the open highways, you miss the 6th gear and more power to overtake other two wheelers and cars. The CB200X can cruise comfortably between 60-90 km/h without any vibrations creeping in from the handlebars, seat or footpegs. However, going more than 100km/h means that vibrations will creep in from these points. In the city, you will not need to change gear multiple times as you can even pick the motorcycle up in the 5th gear from speeds as low as 27 km/h. The 3000-6000rpm powerband is the sweet spot of the motorcycle and most of the torque can be utilized here, be it on soft trails or on the highway. 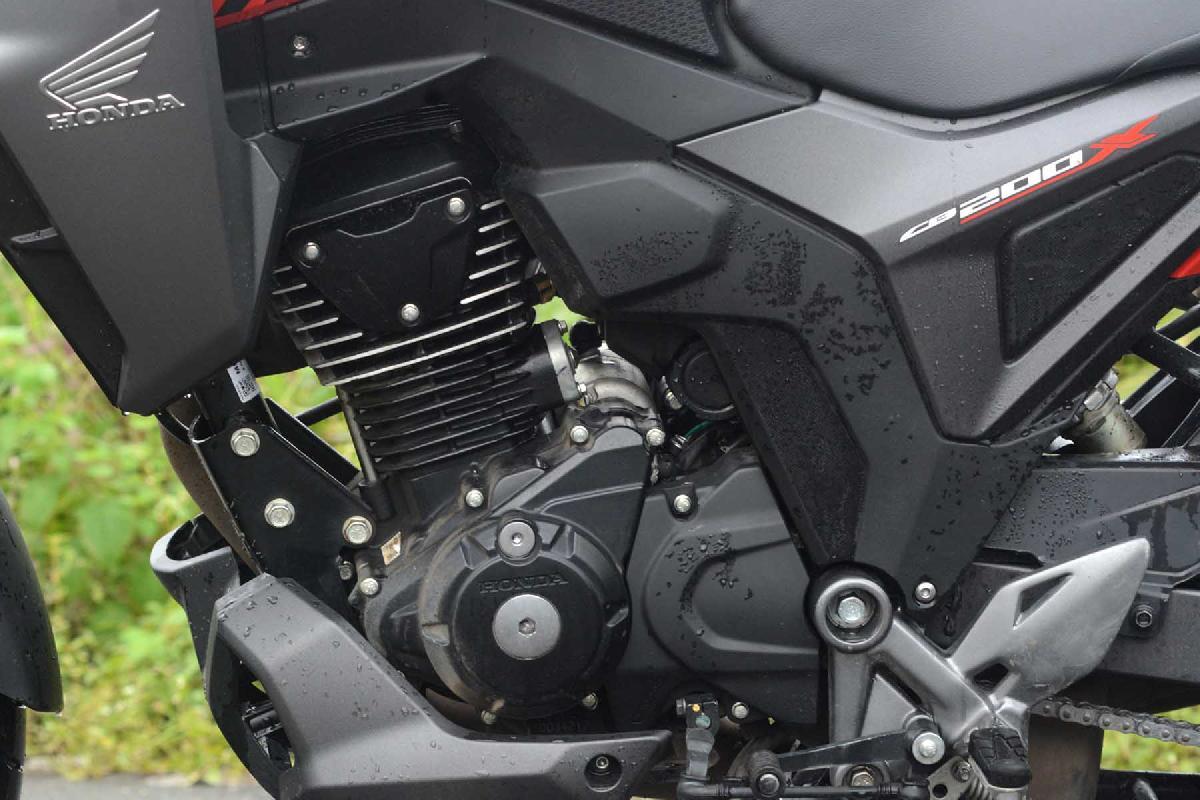 With a price tag of INR 1,44,500 (Ex-showroom), the CB200X is not the perfect motorcycle out there, but it sure will get the job done and don’t forget, you’ll love the way it’ll make you feel, thanks to its striking good looks. By no means is the CB200X incapable, but the Urban Explorer has arrived in a market that is thirsting for more power and where a few others out there still manage to do better in that department. So, in the end it all boils down to whether you want to go for another sharper-looking motorcycle that may perhaps be a much more capable off-roader or opt for the latest arrival from the Honda stables... the handsome CB200X.