The Renault Kiger is here and it looks swell. Should you buy it? We tell you.

After delivering a slew of successful products in the Indian market such as the Kwid, the Duster and the Triber, French auto manufacturer, Renault, has now introduced their compact SUV, the Kiger. (Pronounced like tiger). The Kiger, a global car, designed by the French as well as the Indian design teams is manufactured in India. It will be sold in the Indian market first, before being exported to other markets eventually. Available in four variants, it is priced rather attractively too, with the base variant, RXE, starting at INR 5.45 lakhs. The Renault Kiger will take on Maruti Suzuki Vitara Brezza, Ford Ecosport, Tata Nexon, Mahindra XUV 300, Toyota Urban Cruiser, Hyundai Venue, Kia Sonet, and its alliance partner, Nissan’s recently launched, Magnite, which you may remember, caused quite a stir in the B-segment with its pricing, when it was launched two months back. So, does the Kiger have what it takes to be a hit in the Indian car market? Read on to find out what we think. 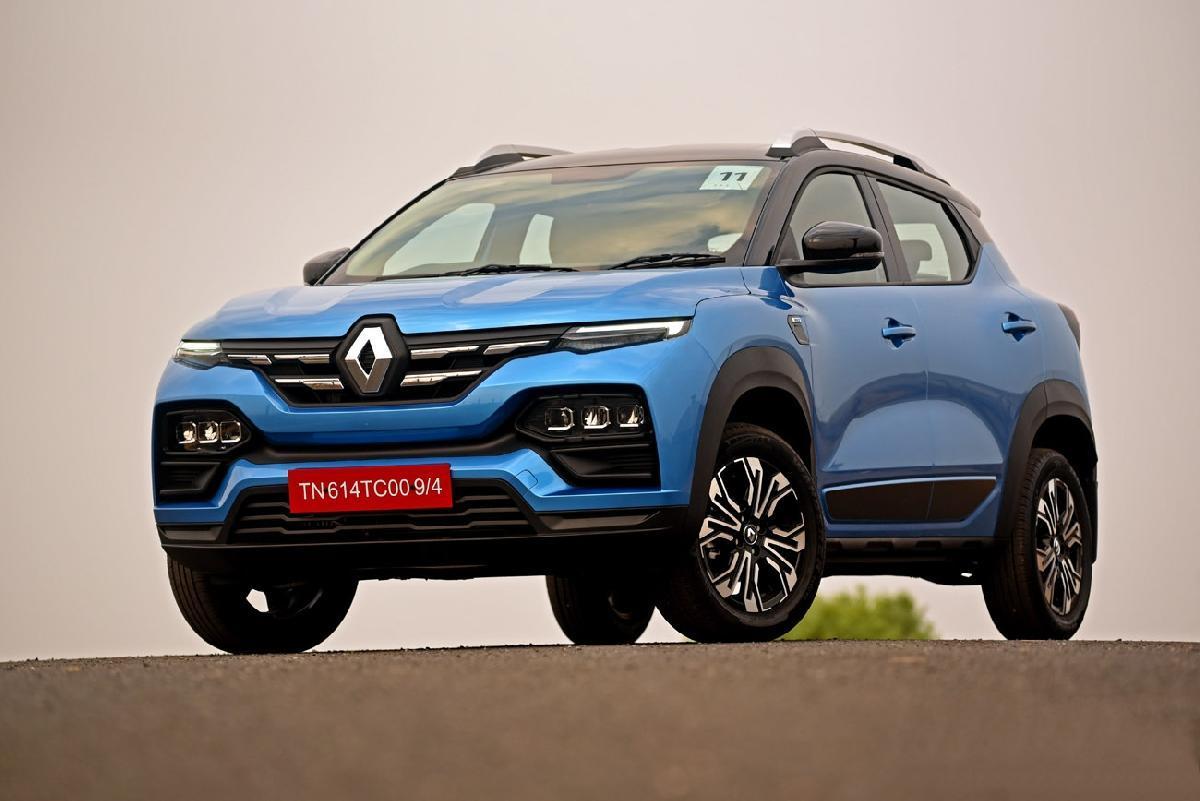 From the outside, the three words chosen by Renault, as part of their ad campaign, to describe the Kiger, are apt – it is “Sporty, Smart and Stunning.” It’s well sculpted muscular body, both front and rear, as well as sharp rakish rear windshield are hard to miss. Take the sculpted scoops on the bonnet, for instance, and the manner in which the rear has been crafted, especially the part just above the tail lamps, these design touches do give the Kiger it’s very distinct identity. 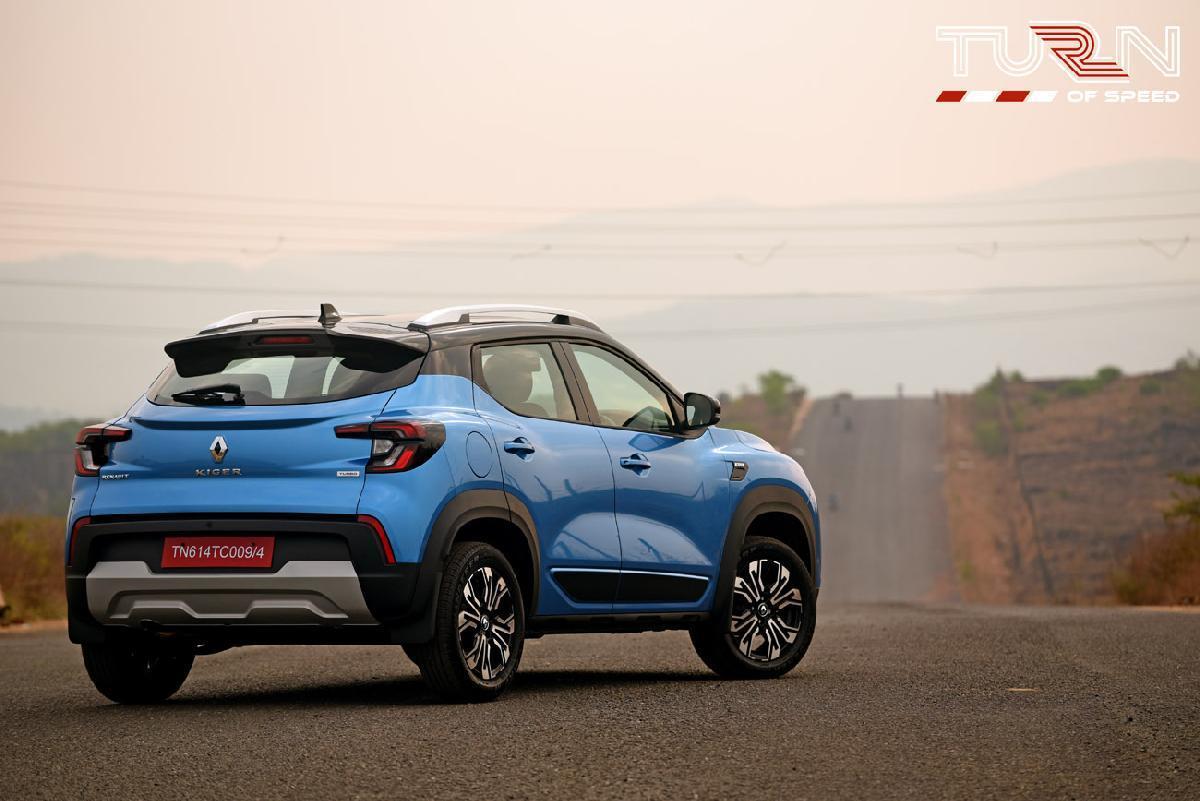 Coming back to the front, its fascia gets the wing shaped grille, flanked by DRLs on both sides, at the center of which sits the Renault logo. 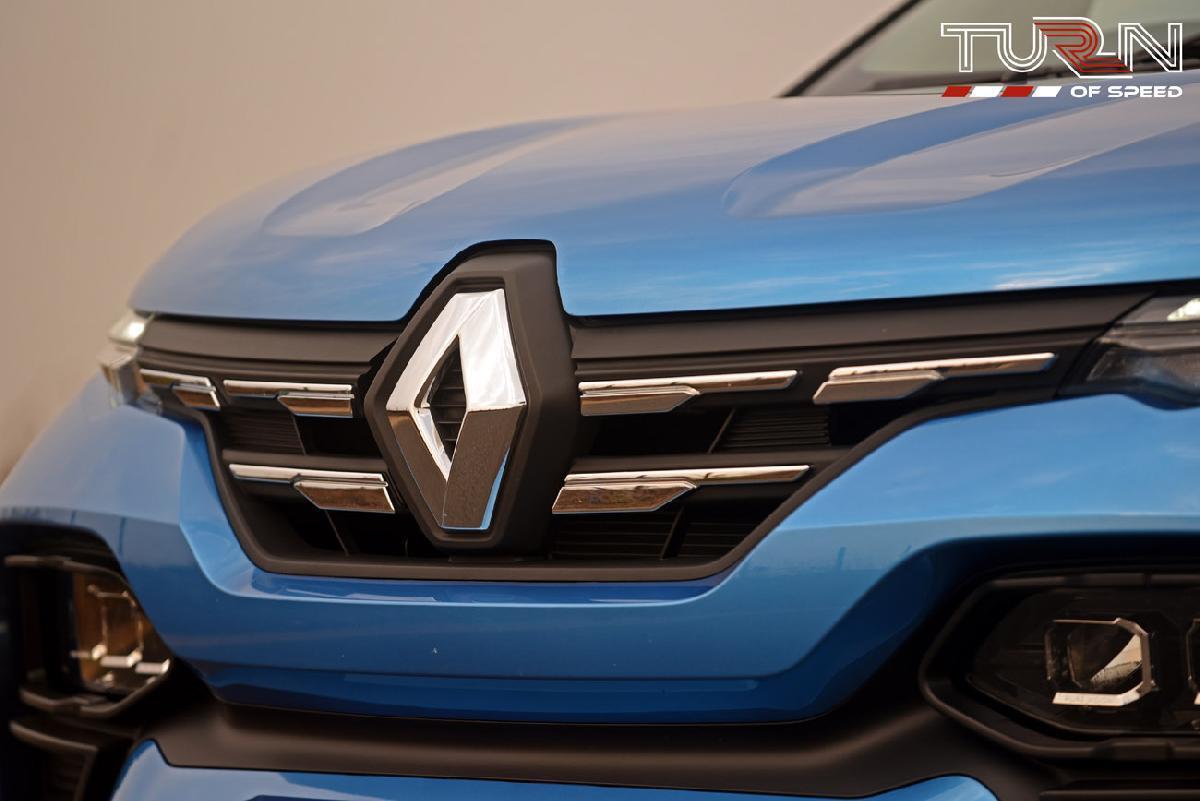 Below the DRLs are three well-positioned cube LED lamps on both sides that look simply stunning. 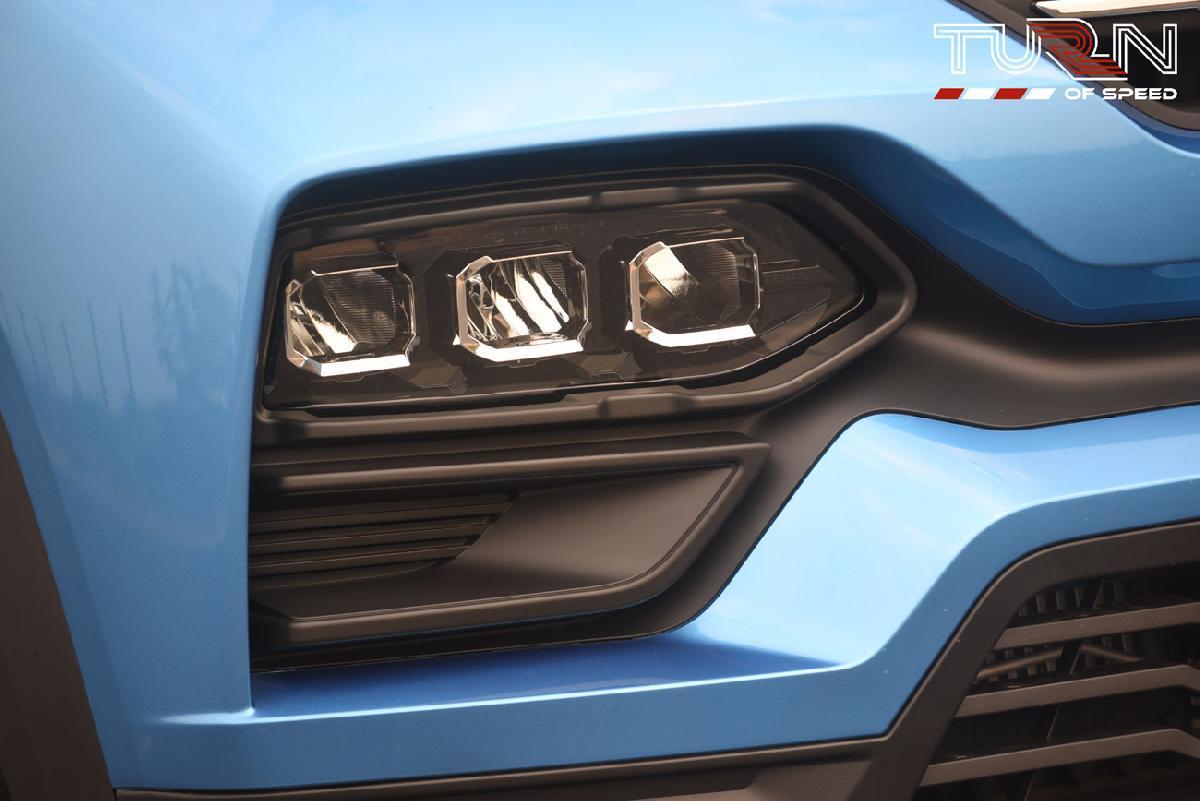 Still below are black slats that run the entire breadth of this compact SUV’s front and which seem to frame it rather well.  This black cladding continues to the sides running over the wheel arches and on to the sides, just below the sculpted doors, all the way through to the rear wheel arches as well, and blends in beautifully with the rear bumper. The black-coloured rear bumper with a silver skid plate has been well-integrated onto the Kiger and does not look out of place. The C-shaped taillamps at the rear really look classy and unlike some of the other C-shaped tail lamps that we have seen, where the lighting is uneven, the Kiger’s glow in a resplendent manner. 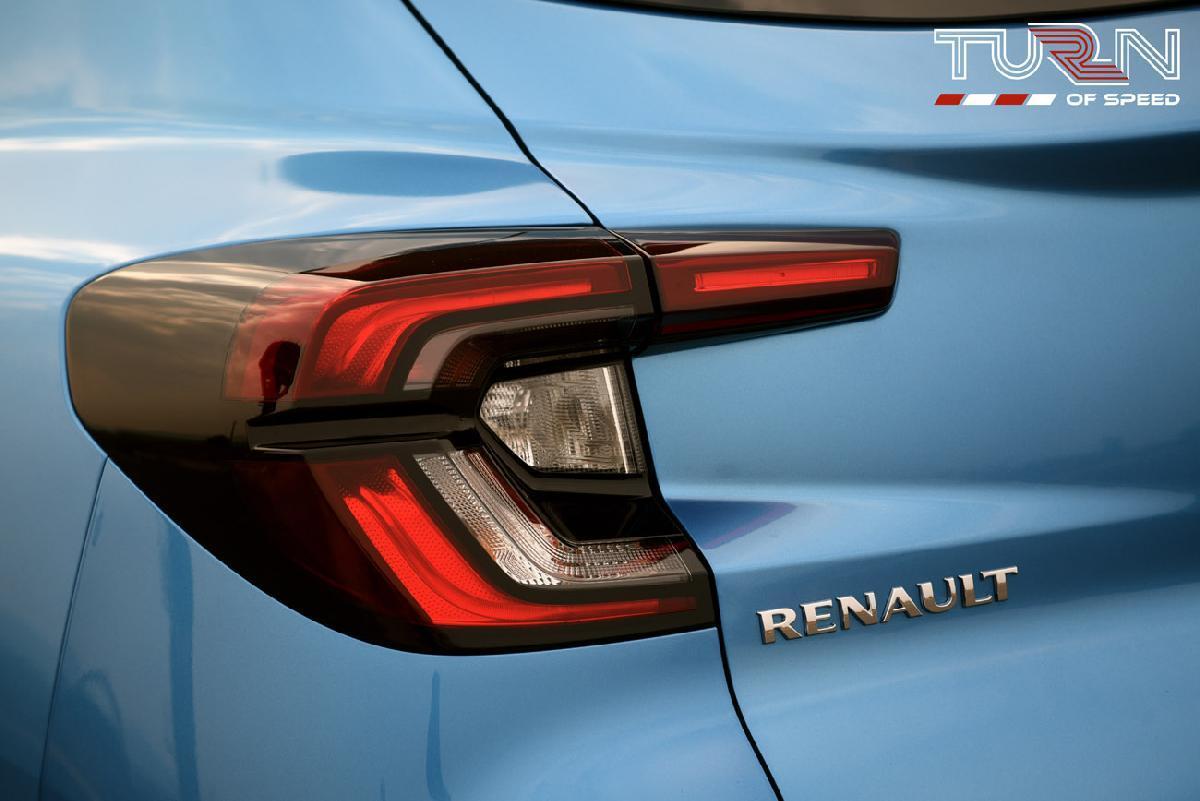 The other big thing that you can’t fail to miss is the blacked-out sun roof which also sports the shark-fin antennae and the rear spoiler, which gets a beautiful ribbed design and further elevates the Kiger’s looks. 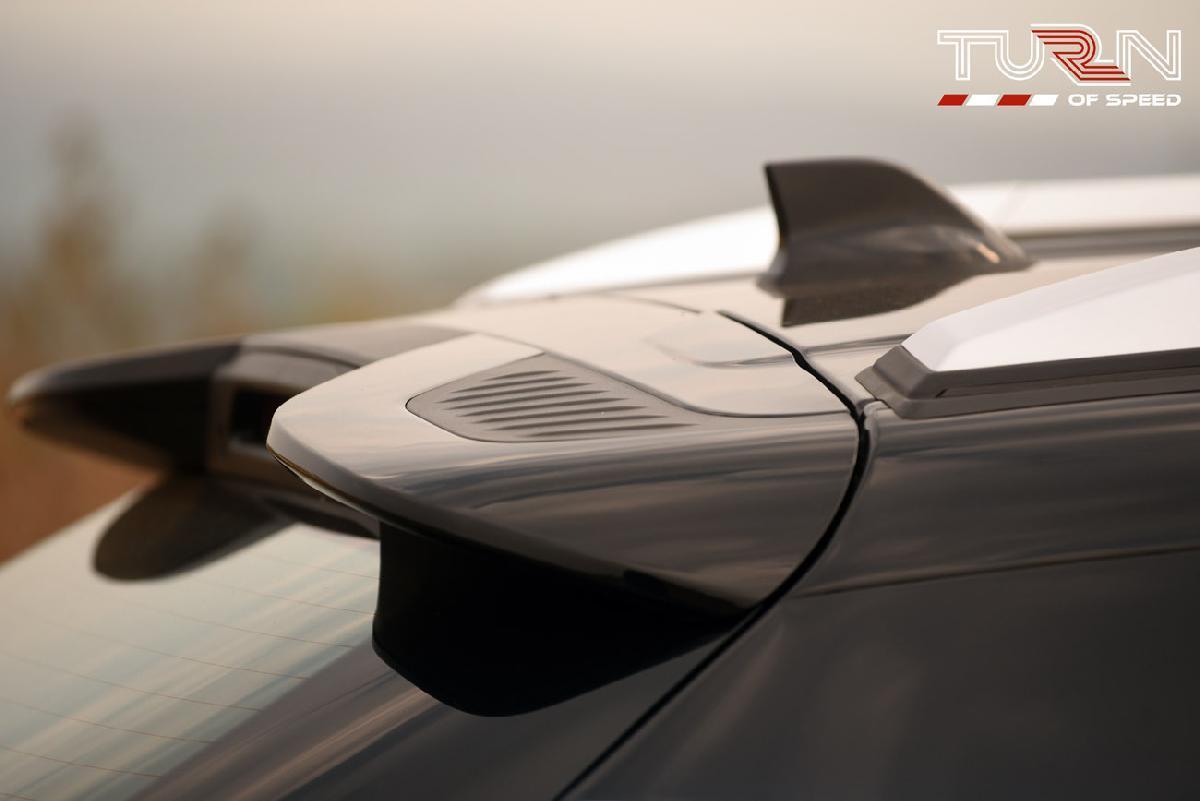 Unlike the Nissan Magnite, the Kiger gives a miss to the rear quarter glass, which gets a partially blacked out C-pillar with the body colour instead. ORVMs get indicators and seem well-proportioned to the compact SUV. The 16-inch diamond cut alloys, thanks to their unique design really stand out on the Kiger and give the overall design a fun, playful touch. 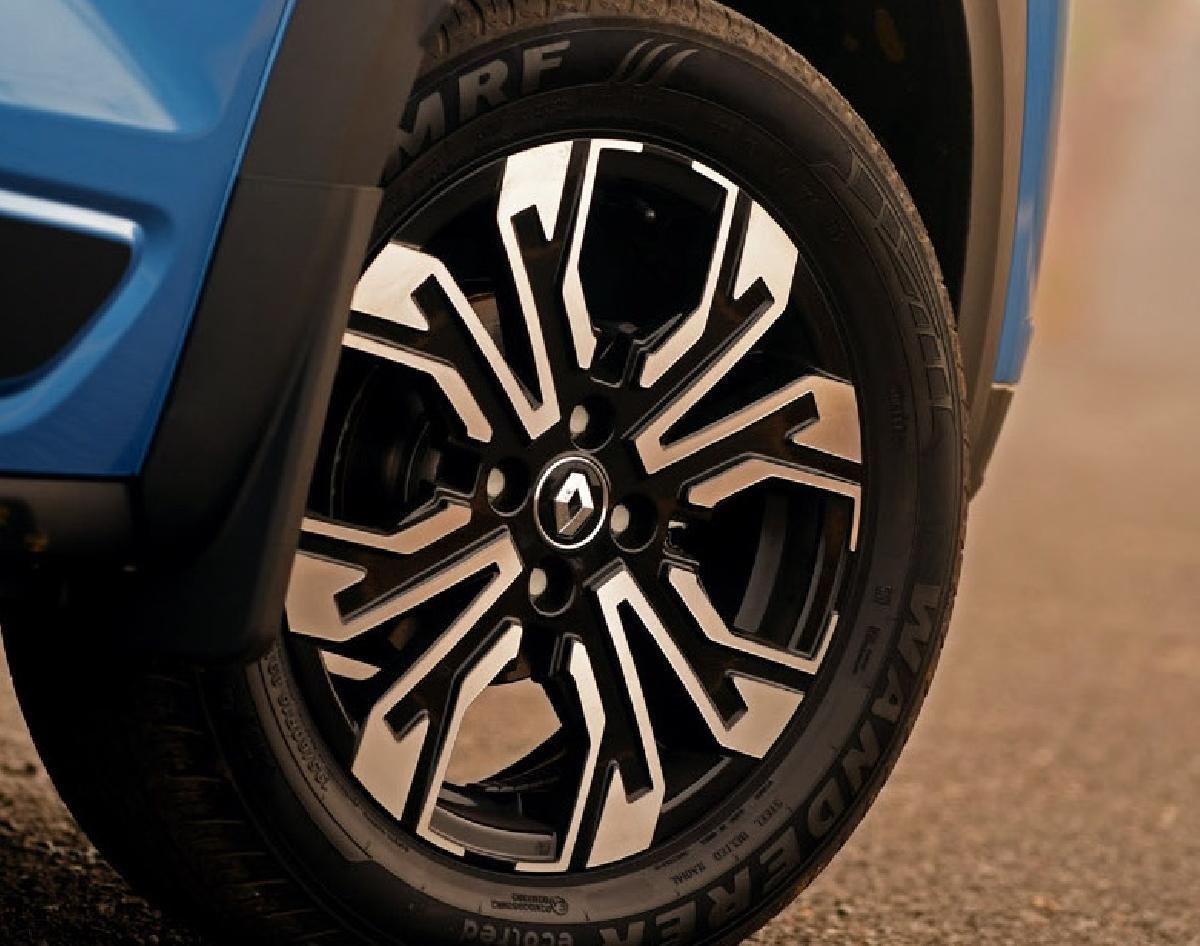 On the inside, the Kiger gets black and grey interiors and black patterned upholstery. This unique pattern has even been replicated on the door panels of the Kiger. It is what we’d call a hit or miss. You either take a shine to it or not. The upholstery gets a contrast stitching in white and it adds to the sporty feel of the compact SUV, just as the blue piping on the carpet mats does. 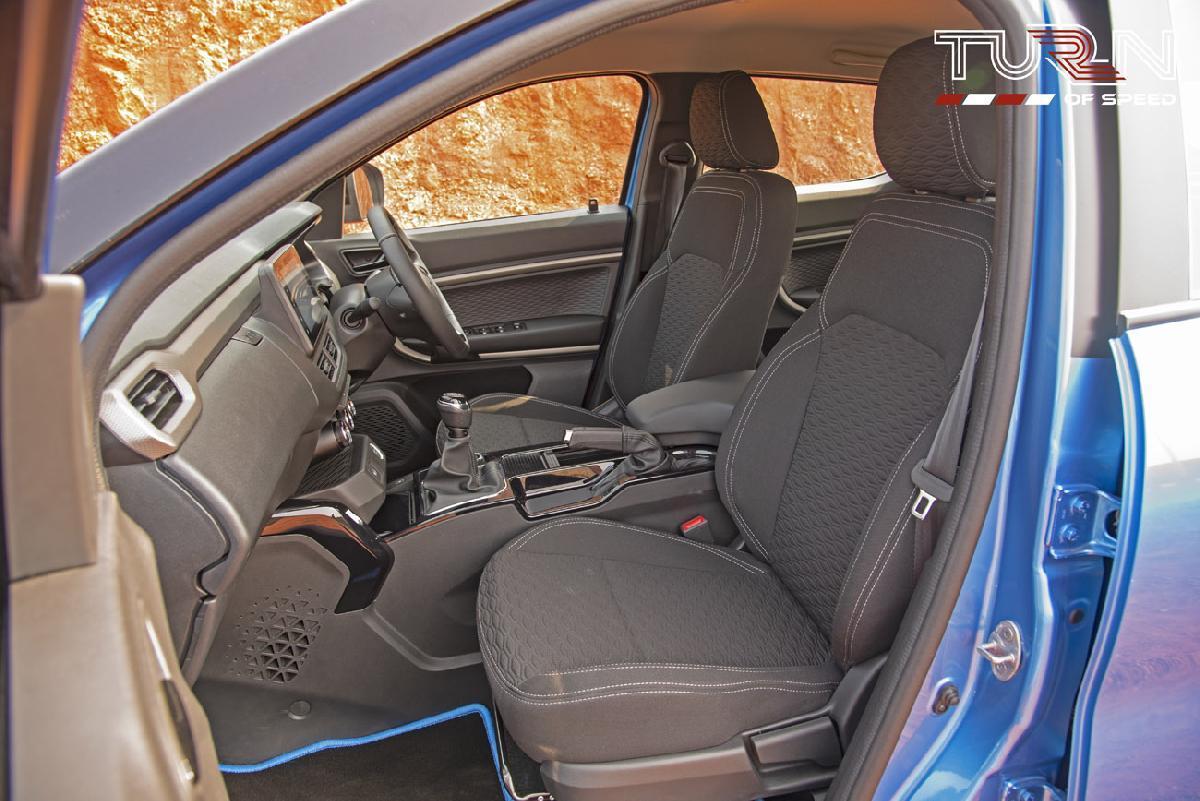 The rear seats are comfortable and the flat floor easily allows for three to be seated comfortably inside. The rear air con vents also add to the rear passengers’ comfort. 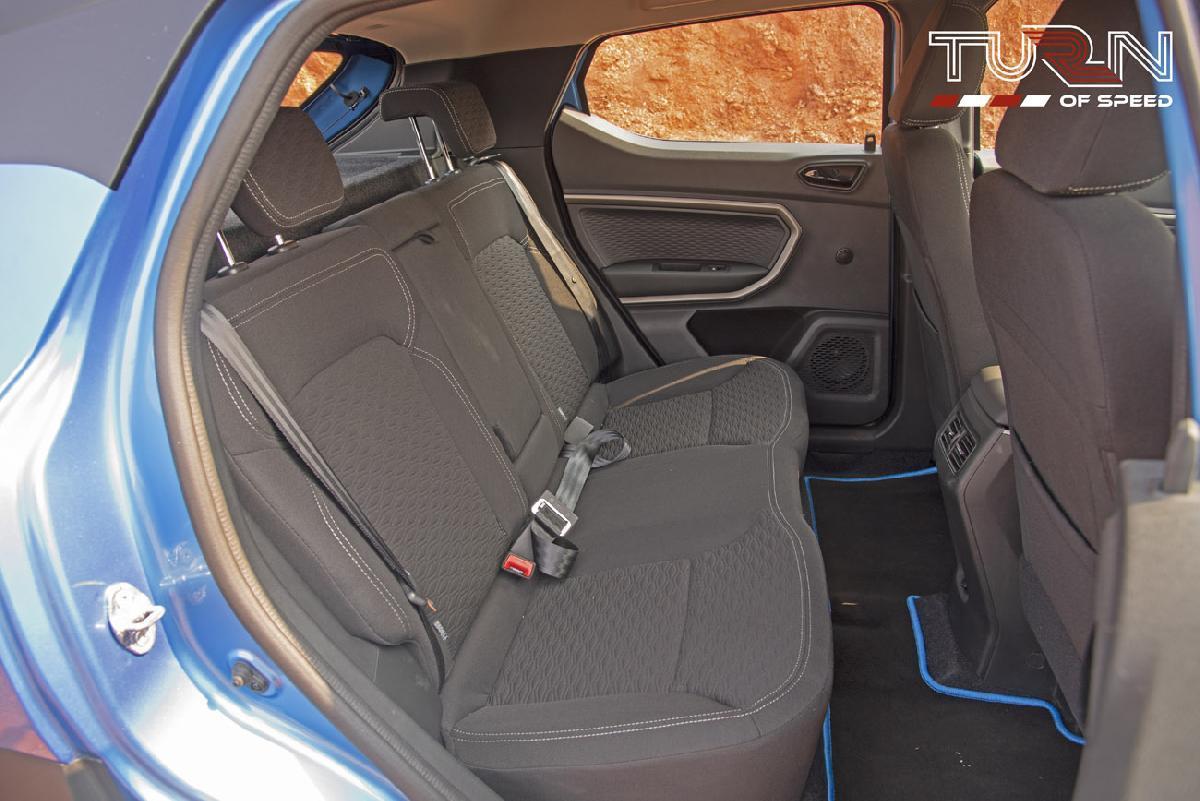 The dash looks sturdy with good quality plastics that don’t feel too hard to the touch. The glove compartment is split into two with two separate lids and you can stash a lot of things in them, one is a cooled one for your beverages and other easy-to-melt food such as chocolate bars and cheese slices. 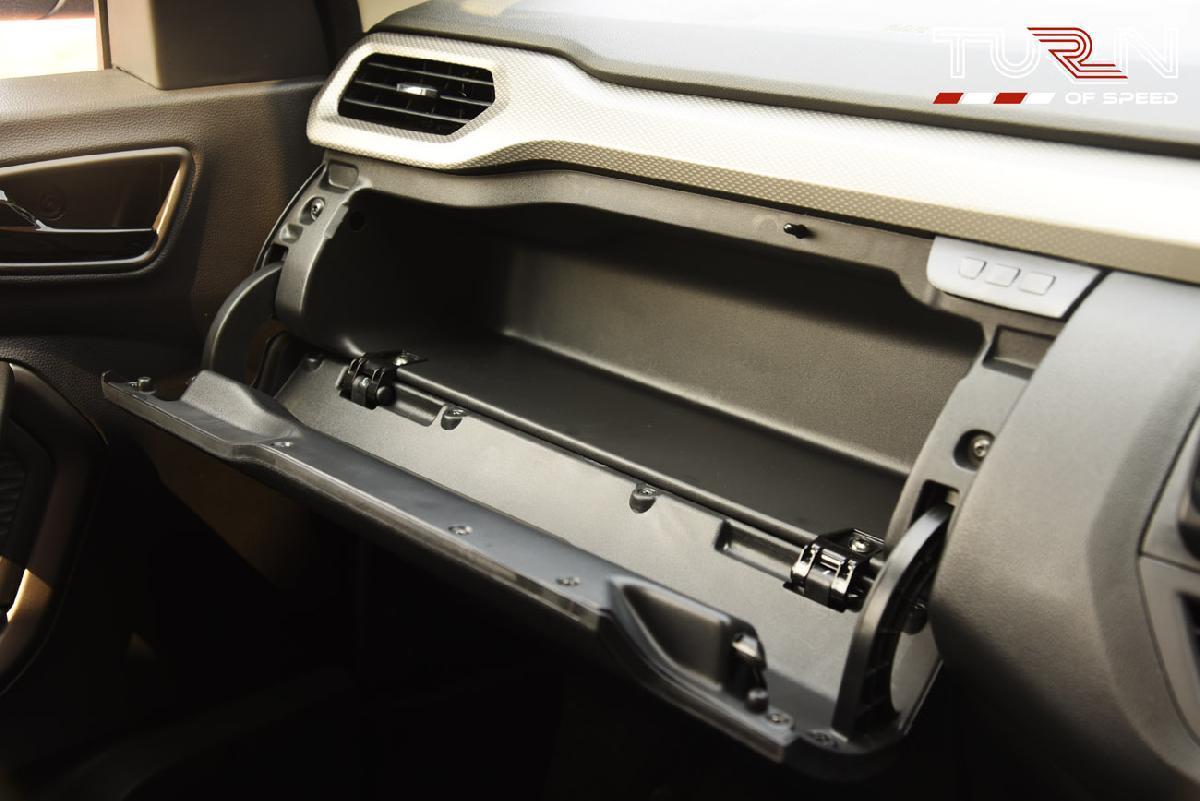 There is a lot of space in the Kiger’s cabin for you to carry a lot of your knick-knacks which won’t jostle about, once placed in their respective slots, inside the Kiger’s cabin. There is a beautiful 8.0-inch touchscreen which seems like a vast improvement from what we last saw on the Triber. 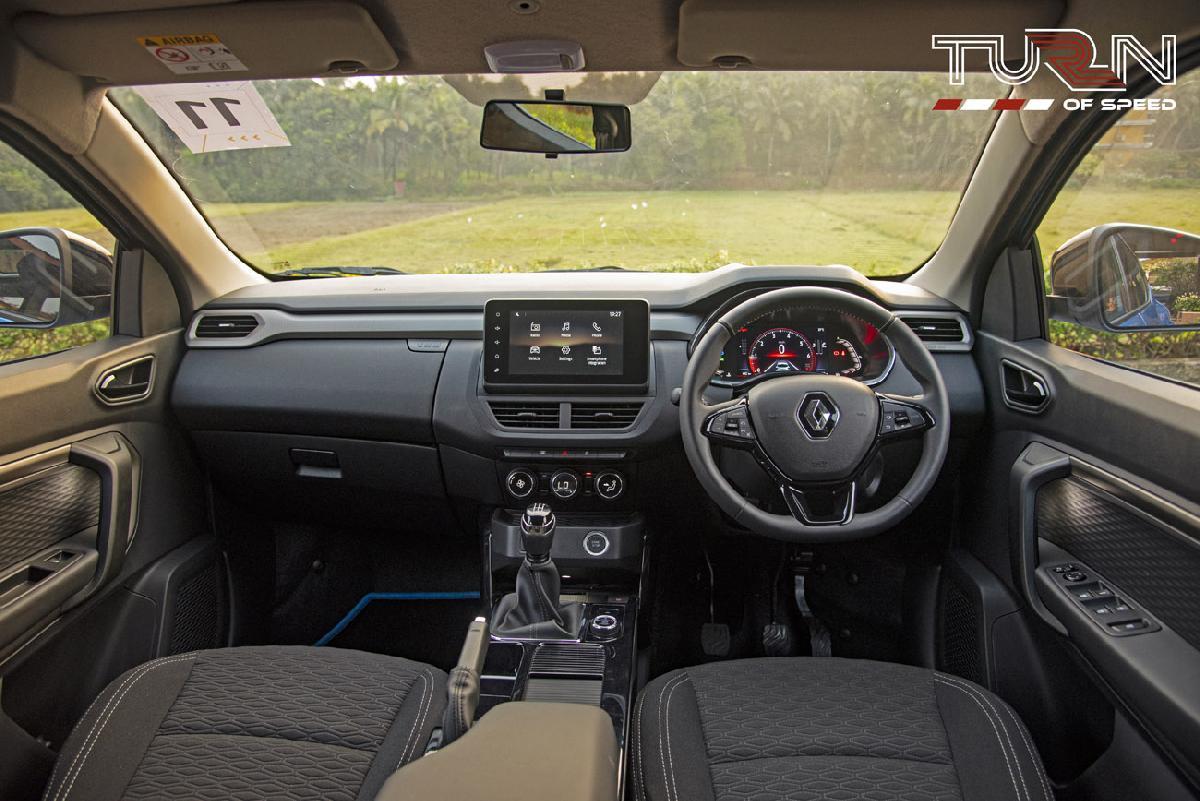 The touch screen is responsive and when the reverse parking camera (Located cleverly inside the Renault logo on the tail gate) is deployed, the picture quality on the touchscreen isn’t too bad. So, it does get a thumbs up from us. 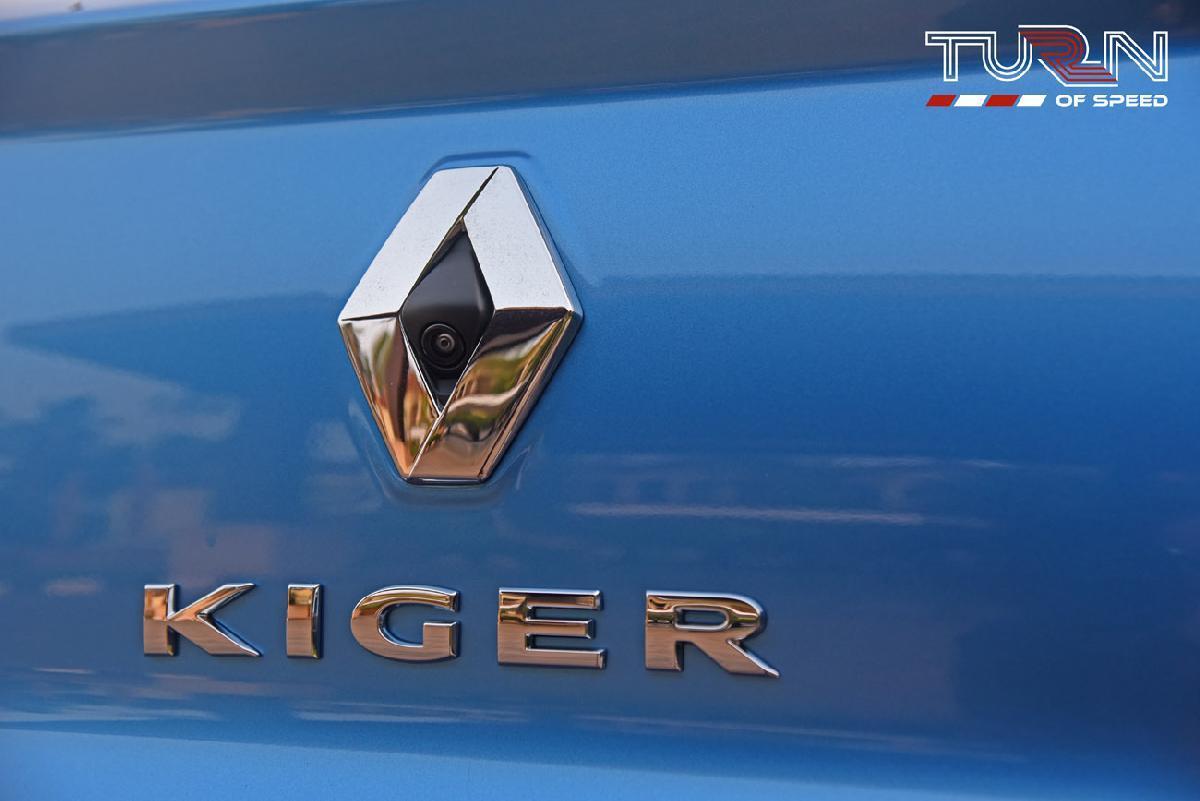 There is also a wireless charger and an air purifier, and we just loved the way in which the backlighting of all the buttons in the Kiger has been done. There is a clean, well-finished quality to it, which just makes everything inside the cabin look really upmarket. Definitely something that a lot of other car makers who still have to improve the quality levels of their cabin vis-a-vis plastics and other materials that they use inside can learn a thing or two from. The one cool thing about the Kiger is that it gets a slightly elevated gearshift which gives the impression of actually being seated inside an SUV. This gearshift which comes with a beautiful chrome band running around it that gives it a premium feel feels chunky to hold and slot and sits in a long panel that runs the course from below the dashboard all the way to the center console. 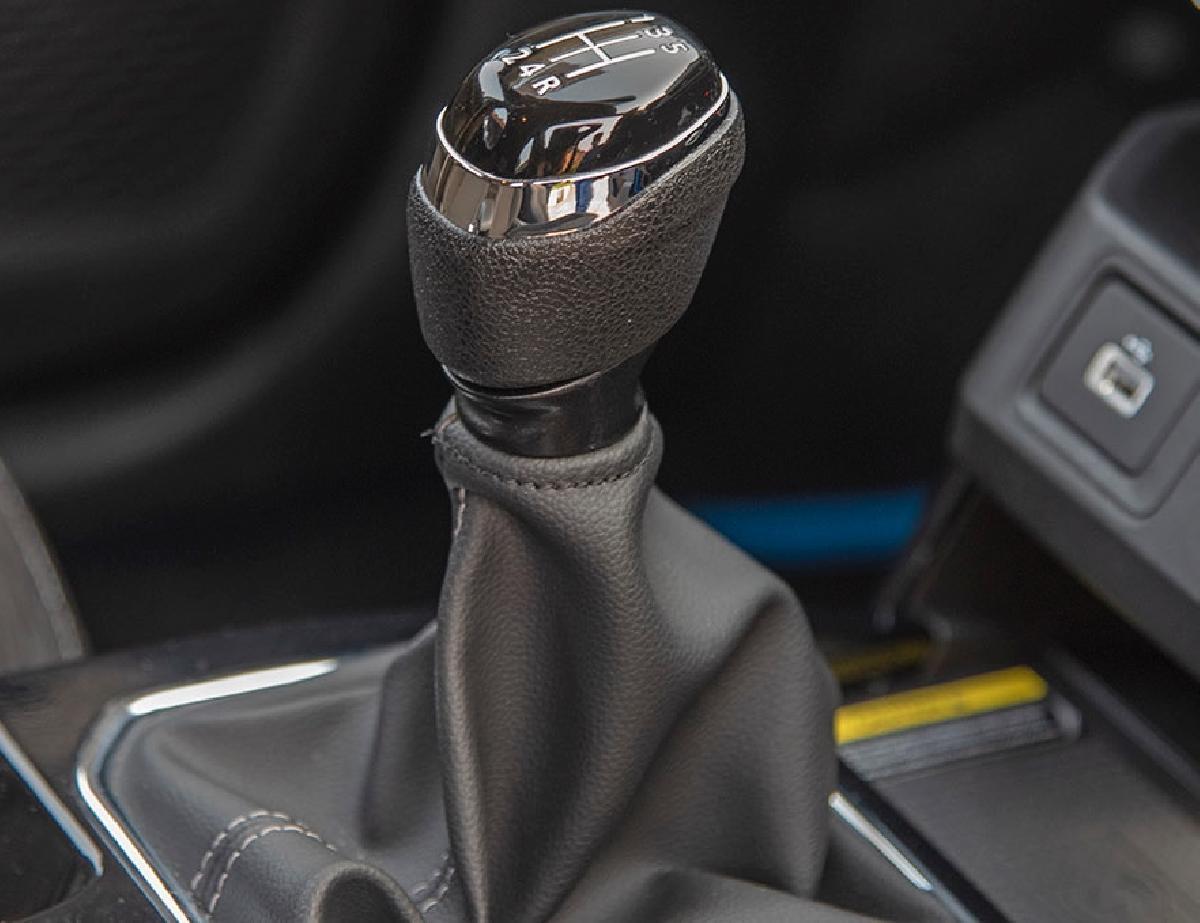 This panel separates the driver and the front passenger making them feel truly well-ensconced inside the Kiger, giving them the heightened SUV feel. There is also a multi-sense mode selector which allows you to decide which mode you want to drive the Kiger in. As you shift from ‘Normal’ to ‘Eco’ to ‘Sport’, the colour on the brilliantly illuminated part-analogue, part digital TFT instrument cluster also changes from blue to green to red as does the performance of the Kiger. 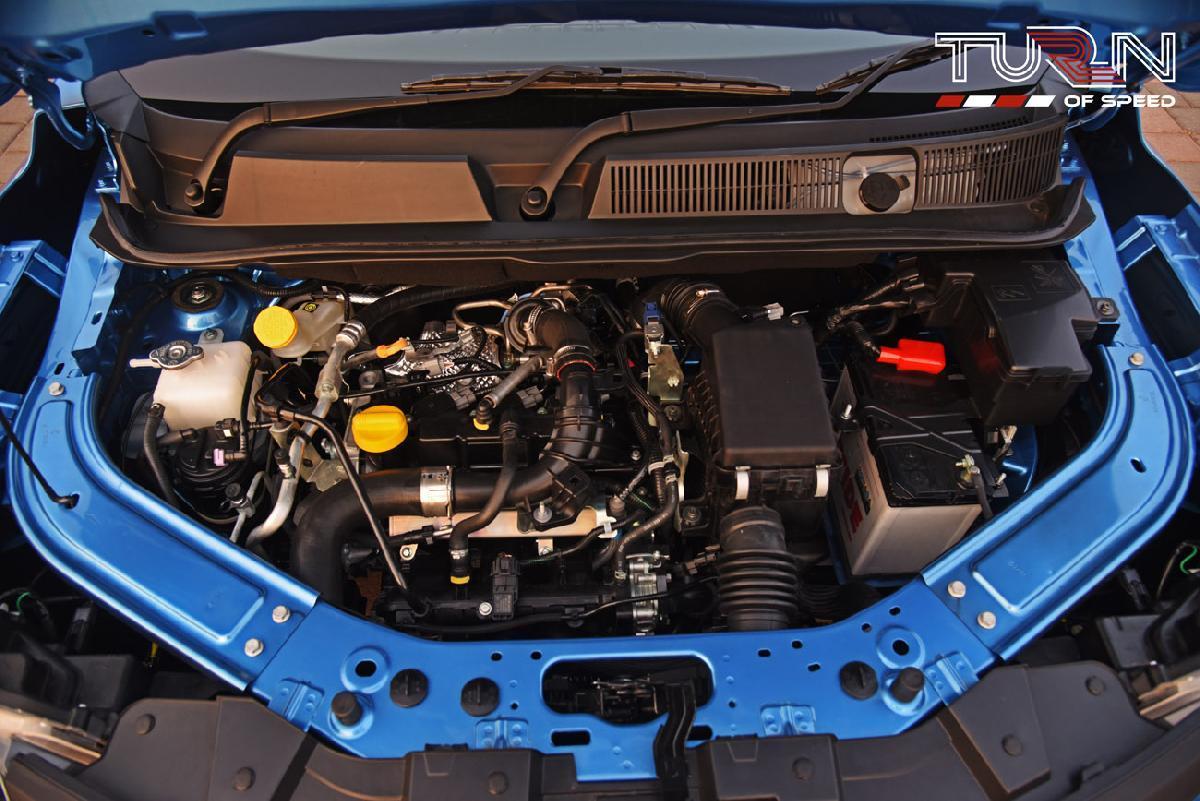 We drove the Kiger in all the three modes, Normal, Eco and Sport and the difference in performance in each mode was evident almost instantly, as soon as the preferred drive mode was selected. The Normal mode, in our opinion, is the best for those who do a lot of city driving and need a certain amount of power without being a ‘slow coach’ on our roads. The Eco mode, saw a slight dip in performance, and is best for all those who want to keep an eye on their wallets and consequently how much of their money is going into their fuel tanks. Driving in this mode is not exactly fun especially if you’re a motoring enthusiast, but yes, you will be laughing all the way to the bank. Shifting to the Sport mode is where all the action is. The instant surge in power is evident and this is accompanied by the change in the sound of the engine which becomes more audible, once you’ve shifted to this mode. 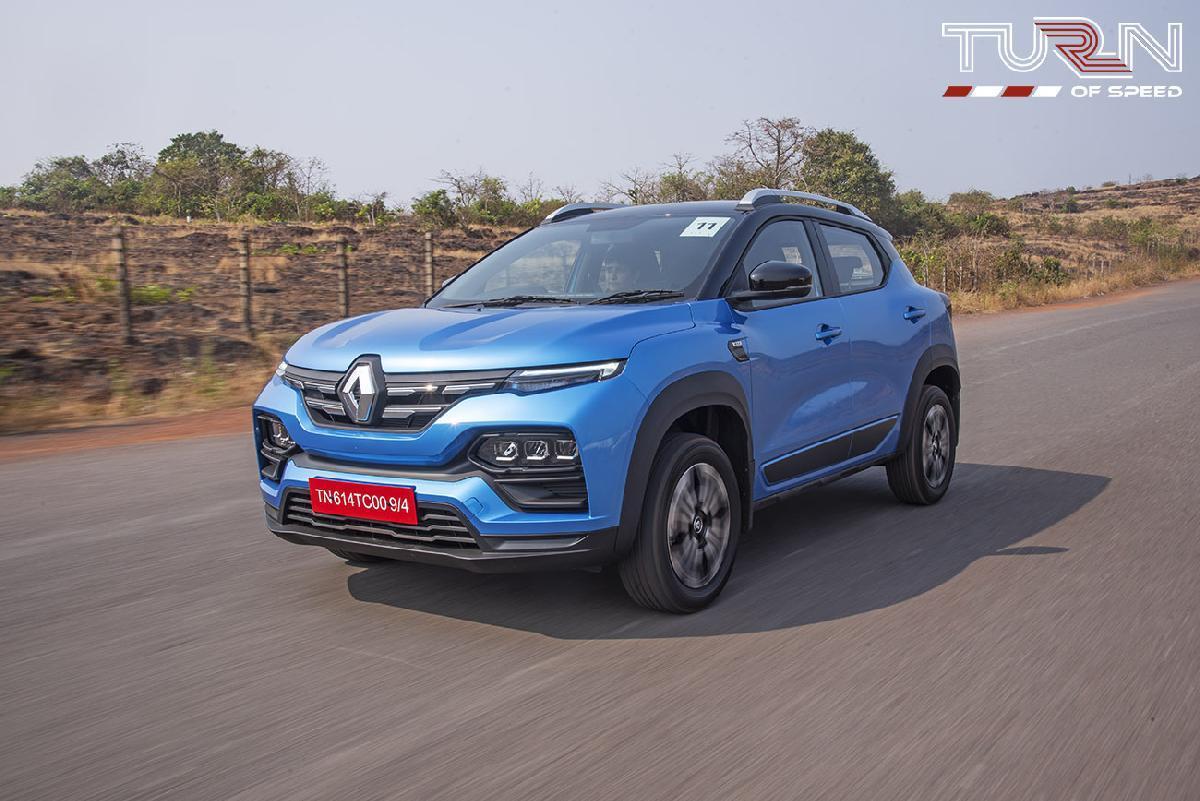 We noticed slight vibrations coming through the gearshift, in the vehicle that we were driving, however, they were very mild, and nothing that the engineers at Renault cannot take care of. The Kiger’s strength lies in how it pulls cleanly and not once did we see the Kiger panting or puffing for power despite it being only a 3-cylinder 1.0-liter engine and that says a lot about its engineering prowess. However, with four passengers seated inside, the Kiger was a tad bit slow to respond to throttle inputs on inclines, but, no such thing was experienced while driving on straight city roads. In fact, the Kiger’s power delivery is linear and there aren’t any spikes in power and the gears slot well with a kind of click that feels satisfying. Also, if you’re a novice, you will never have to worry about having slotted the gear in the wrong slot because that’s just how confident you feel while slotting the gears on the Kiger. It was fun driving the nippy Kiger around and we really liked its turning radius of 5.02m, which means maneuvering the Kiger in extremely tight spaces can be really simple in our crowded cities. 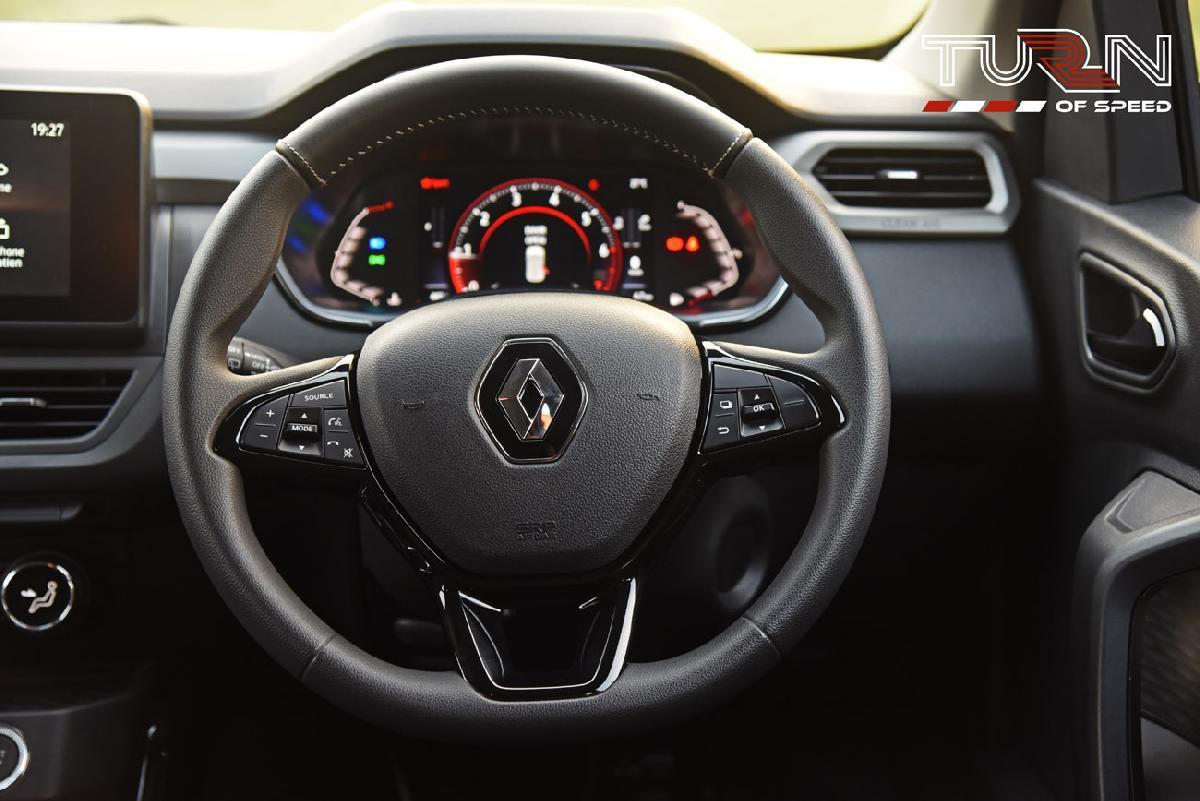 The 205mm ground clearance is adequate atleast for regular city driving and should be able to tackle any impediments in the way. The combination of disc (front) and drum (rear) brakes is a good one too and we did not experience any braking problems whatsoever during our drive with the brakes having sufficient bite at all times and on all kind of road surfaces.  The ride quality of the Kiger is also very good, and the fact that we didn’t feel any bumps because the Kiger gobbled up potholes effortlessly says a lot about the attention that Renault’s engineers always pay to the suspension set up of their vehicles, in fact this has been one of their hallmarks at Renault. 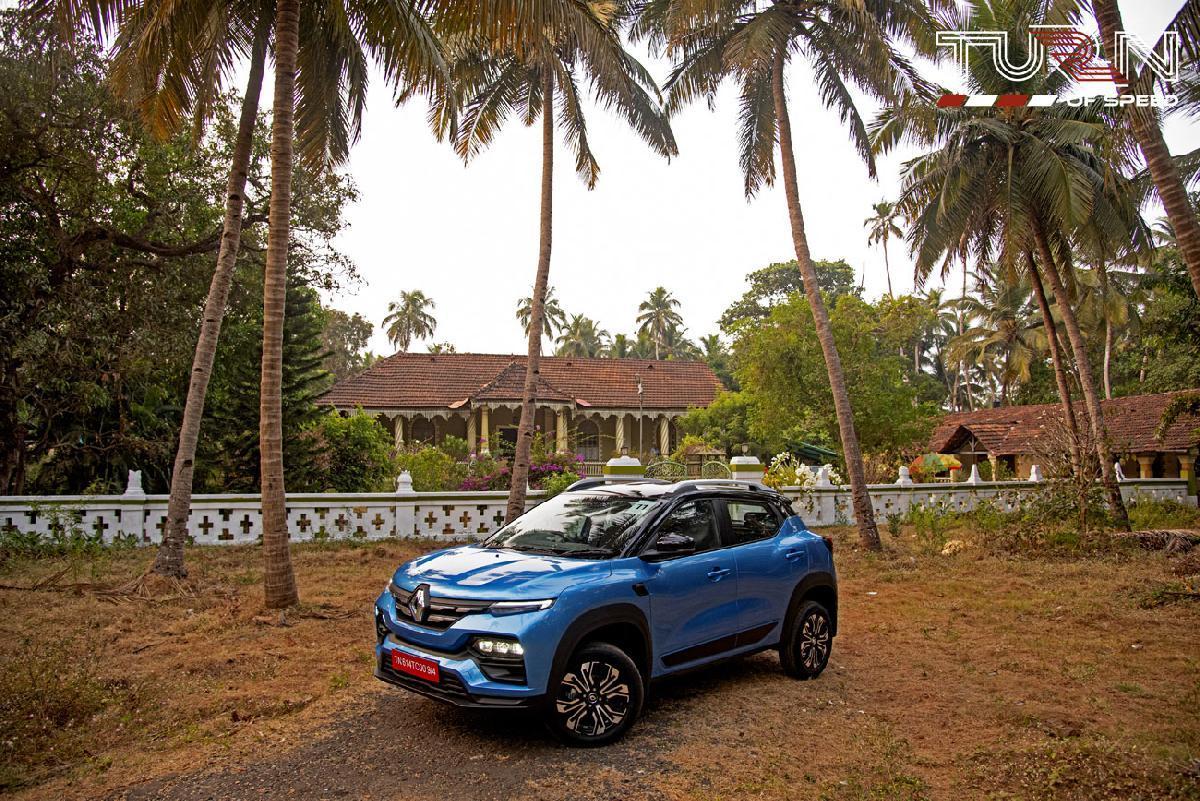 So, for all those who are planning on buying the Kiger, there is little to stop you. 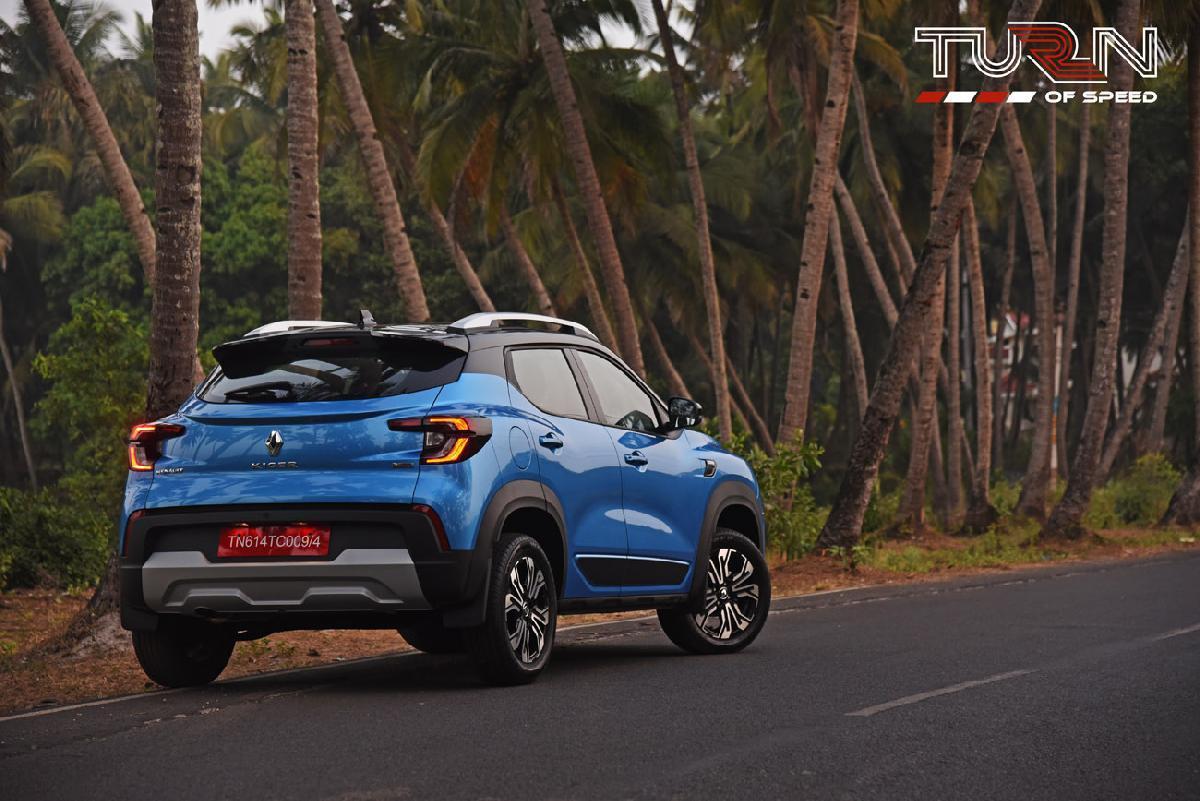 It’s got a great design both on the outside and the inside, drives well, comes with a host of safety features, ensures you breathe clean air, and will give you a lot of miles before you find yourself at the gas station, topping up your Kiger’s 40-liter fuel tank again. With the Kiger, Renault, has ensured that yet again it has delivered a cleverly packaged well-rounded offering that is also extremely well-priced catering to people from different walks of life who’re looking for a good, well-built, quality product while not breaking the bank.