The Bold and the Beautiful

Love spirited driving? Look no further – the VW Taigun is a blast!

While Taigo, Talagon, Taos, Tayron and Touran are car models manufactured and sold internationally by the German carmaker, Volkswagen, India, too has seen its fair share of their ‘T’ models, in the form of the Touareg, the Tiguan and the T-ROC. Now, as Volkswagen gets ready to introduce their latest model, the brand new Taigun, in the Indian car market, the excitement around the SUV is palpable. But then is the Taigun, which had wowed everybody at the Auto Expo, last year, where it was introduced for the very first time, worth the hype? 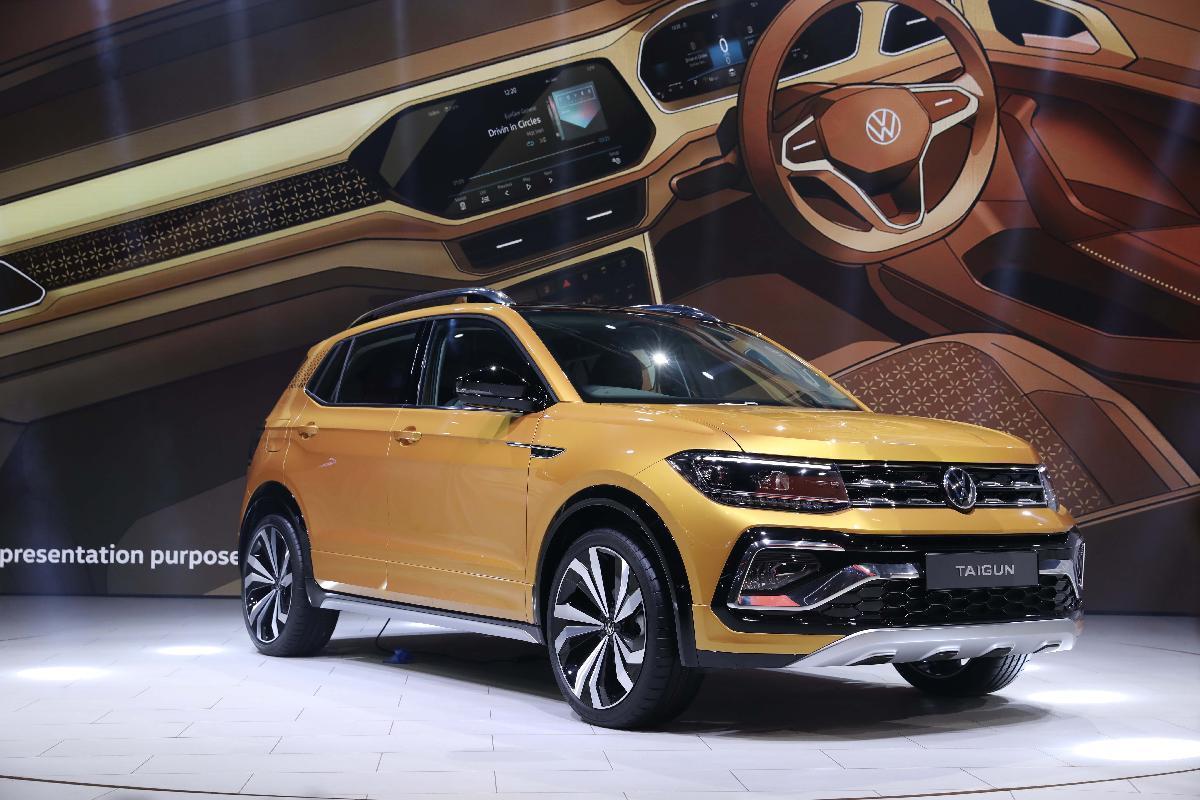 We got behind the wheel of the range-topping Taigun GT (1.5 TSI) recently and let’s just say that ever since, it’s been quite a struggle coming out of that reverie. 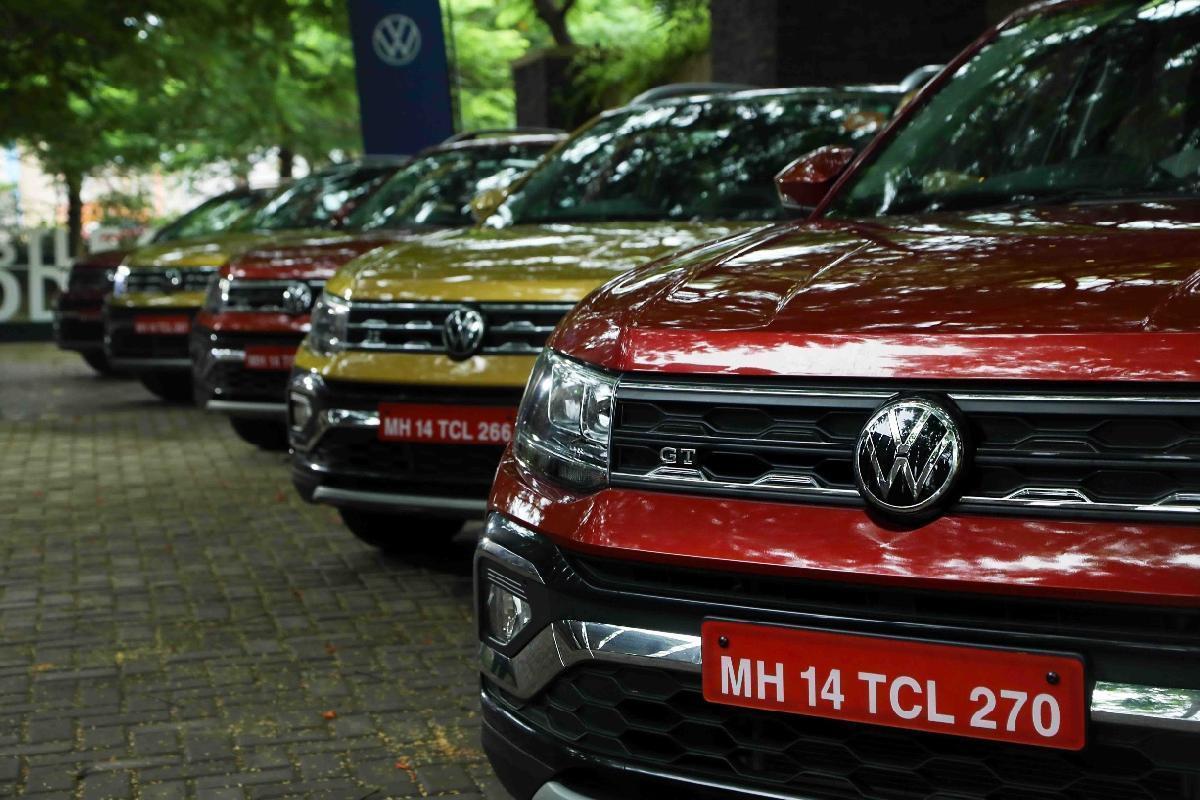 Love at first sight. Yes, you read that right. The designers and engineers at Volkswagen have ensured that the new Taigun captures your heart with its fresh design, robust build quality, and magnetic appeal. Don’t believe us? Just take a look at the proportions of the SUV and you’ll know exactly what we’re talking about. What you see is the quintessential Volkswagen design with a strong family resemblance, and yet, the Taigun, manages to stand out and retain its individuality. The crease lines on the high bonnet, the ever so slightly flared fender and wheel arches as well as the waist line speak volumes about the restrain exercised in design. In fact, it can be said that the German carmaker continues to give us a glimpse into the future of things to come with their new SUVs as they now all sport a more slimmed down and leaner aesthetic making the bulky, beefy and bulbous SUV designs a thing of the past. 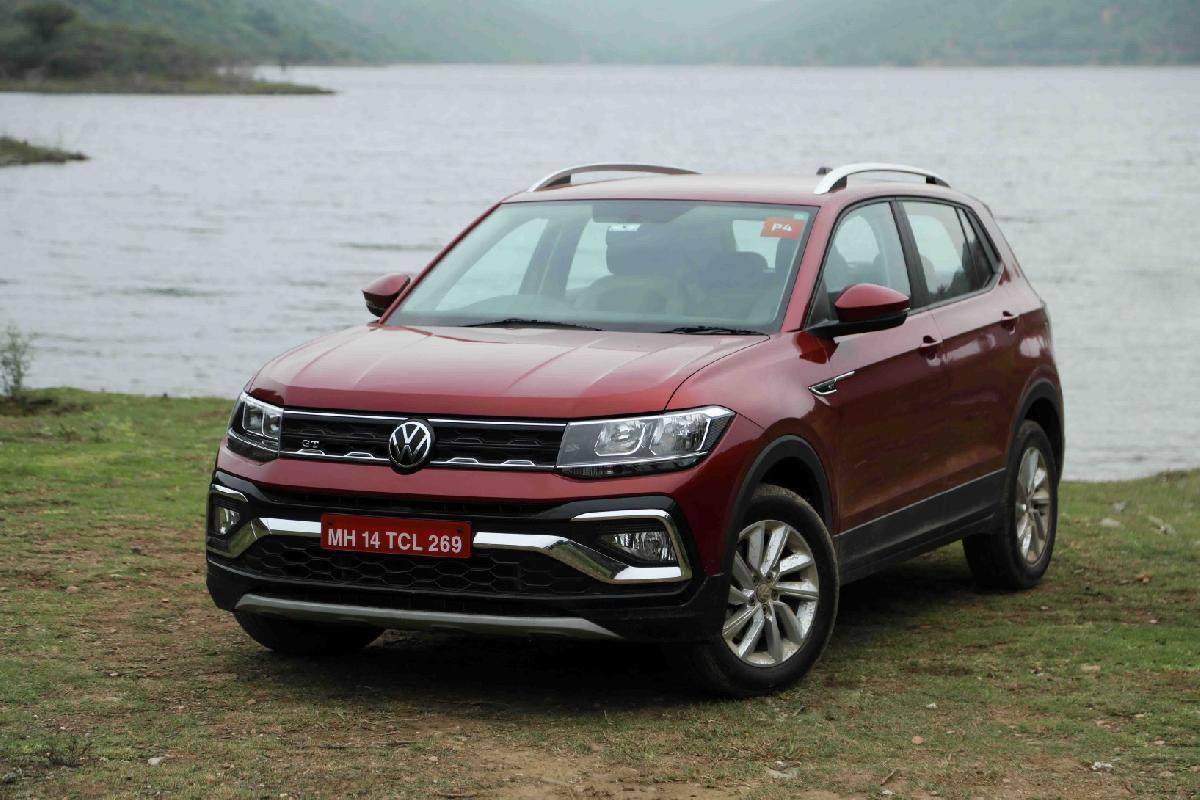 The front three-slat grille gets beautiful chrome inserts with the GT badging along with the VW logo prominently displayed at the center. The headlamps with DRLs and the eyelash design below them look stunning. Knowing Indians’ love for chrome, the Taigun gets a tastefully executed chunky bar in a chrome finish on the front bumper that wraps itself beautifully around the large fog lamps. It must be said here that the designers at Volkswagen have really outdone themselves with the chrome treatment on the Taigun because of the fine balance that they have managed to achieve while playing around with chrome ensuring that it doesn’t look too OTT. The result is a supremely classy front fascia minus any of the tawdriness from whichever angle you look at it. Below this chrome finish sits a honeycomb mesh patterned grille and below that is a skid plate in a matte silver finish. The side gets a GT badging as well, a trend carried over from cars in Europe.

However, it is the Taigun’s rear that has captivated people’s imagination. While the rear gets a lot of sharp cuts and creases, the pièce de resistance is the LED light strip that runs across the tailgate which is flanked by two gorgeous C-shaped taillamps. At the center of the light strip sits the VW logo glistening in all its glory. Below, the chrome treatment continues right onto the faux exhausts, a trend that has become hugely popular with the SUV manufacturers. We just love the really polished manner in which it is seen on the Taigun. The bootlid also gets the letters TAIGUN GT which thanks to not being too far apart look really clean. 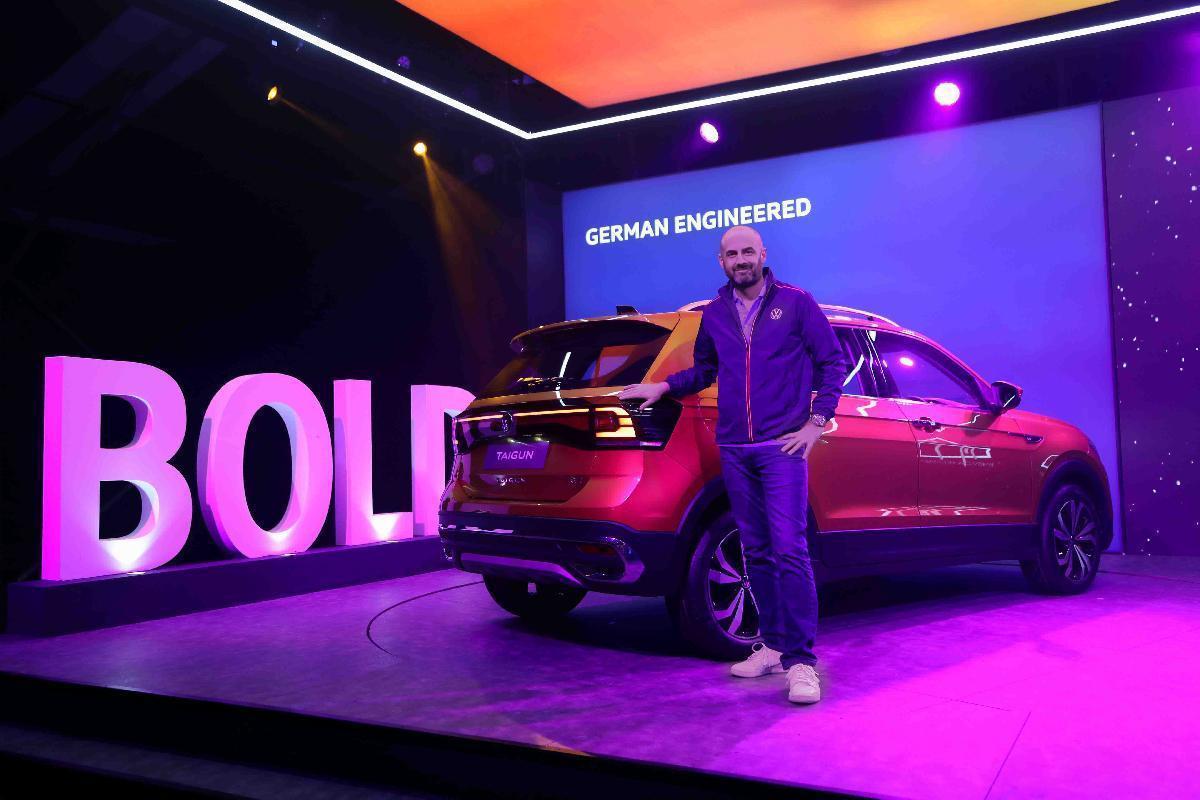 On the top, the Taigun, gets working roofrails in the same matte silver finish, just like the skid plates which can come in handy for your extra luggage or even for carrying other adventure sports paraphernalia such as a mountain bike or maybe even a kayak. 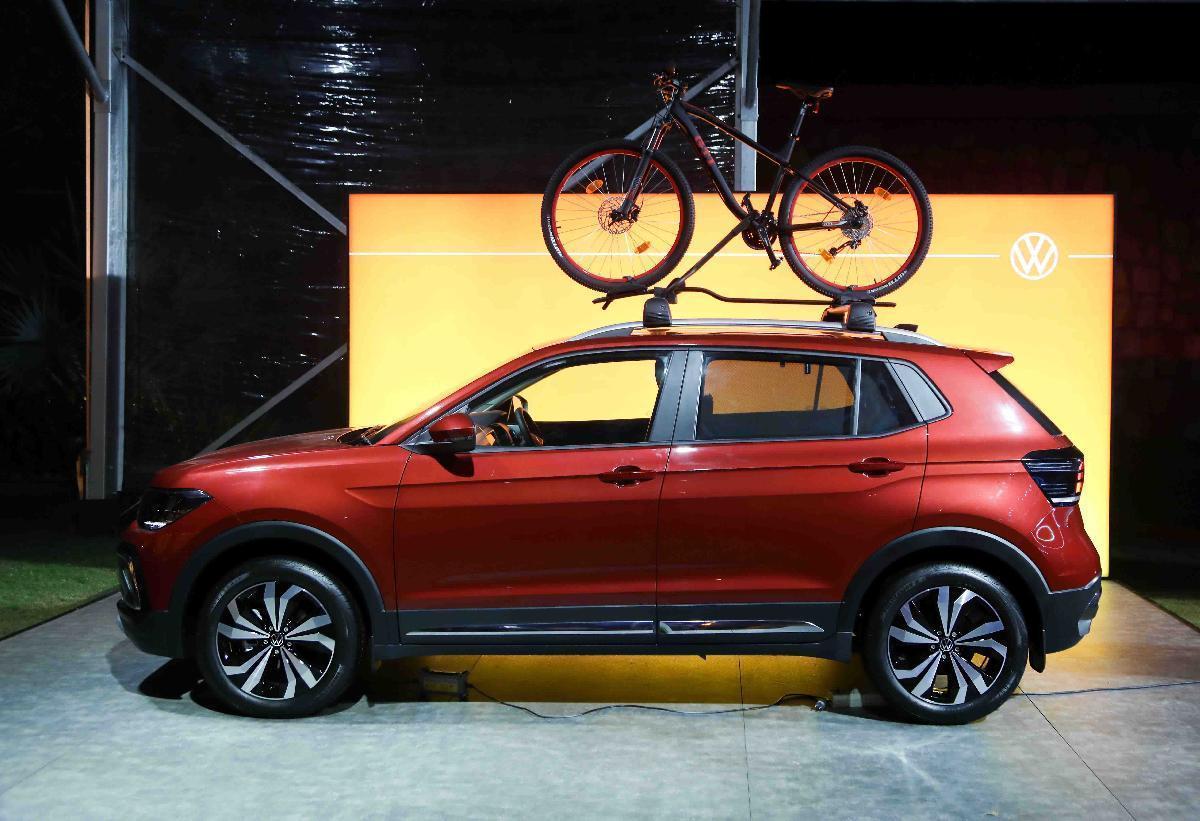 Finally, the alloys on the 17-inch wheels complete the classy look of the Taigun. Just keep the alloys clean and you’ll see your Taigun sparkling all day long. 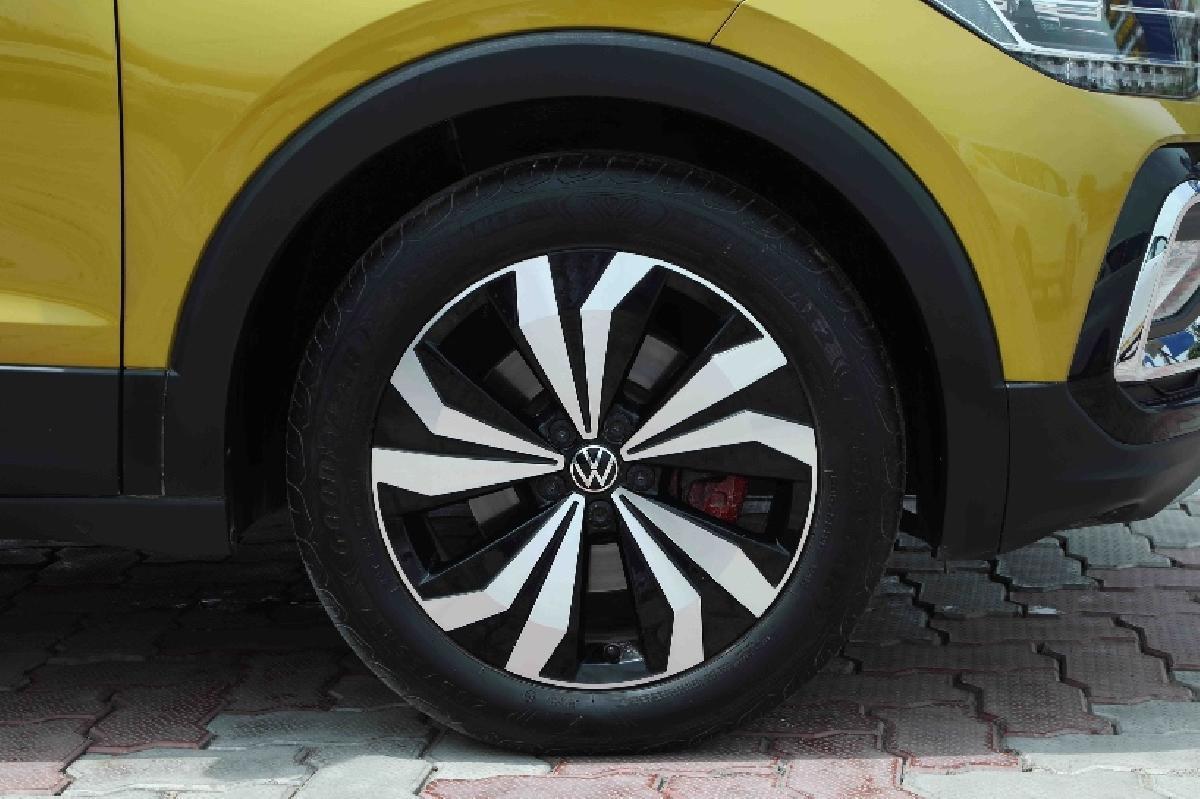 As soon as you step inside and hear the solid door thud, you know instantly that it is the reassuring signature sound of a Volkswagen door and frankly, the Taigun’s door thud is sheer music to the ears which immediately differentiates it from its rivals. The first thing that catches your eye inside, is the red-coloured premium metallic finish treatment that the dashboard gets on the Wild Cherry Red Taigun. It looks striking and is unlike anything that we’ve seen before. Some may argue that it isn’t for everyone but then the red-coloured metallic finish treatment has been exquisitely integrated and blends beautifully with the exterior colour of the Wild Cherry Red Taigun. The ambient lighting in red makes it even more appealing. 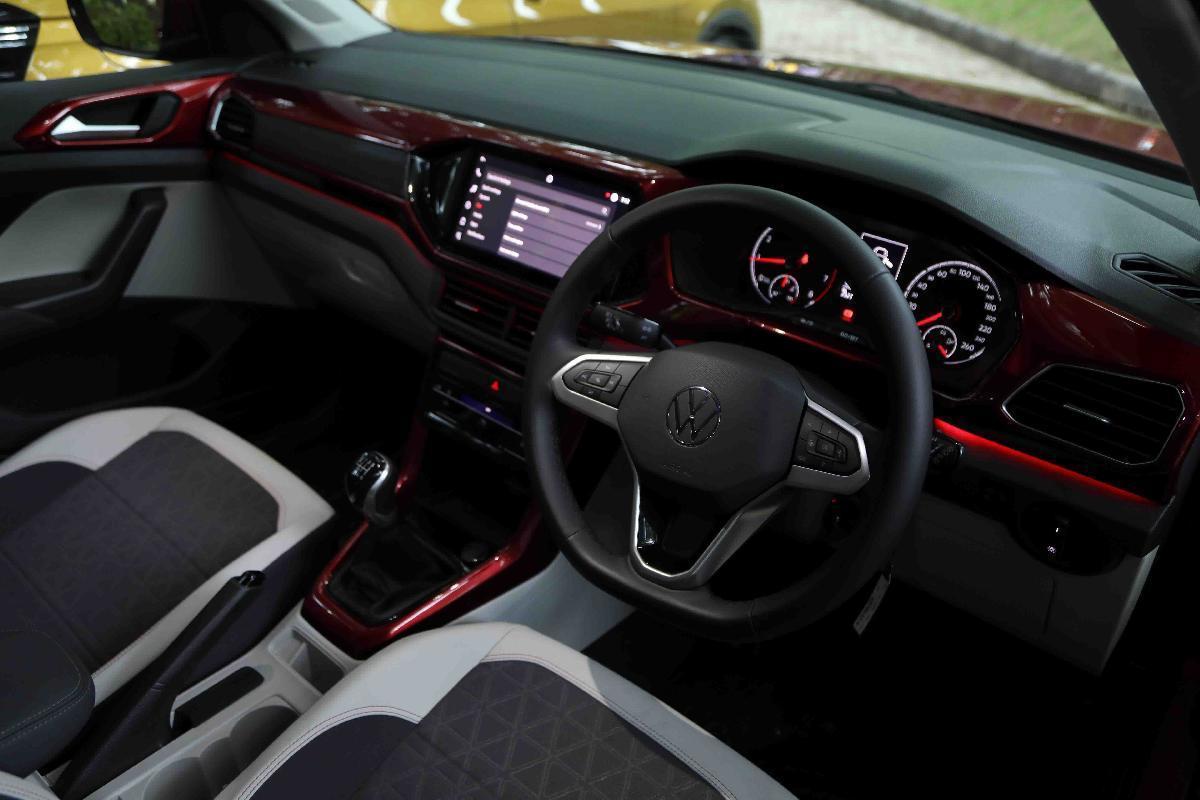 And for those who like to steer clear of too much red, there is also the option of a more sober grey finish that is available on the Curcuma Yellow Taigun. 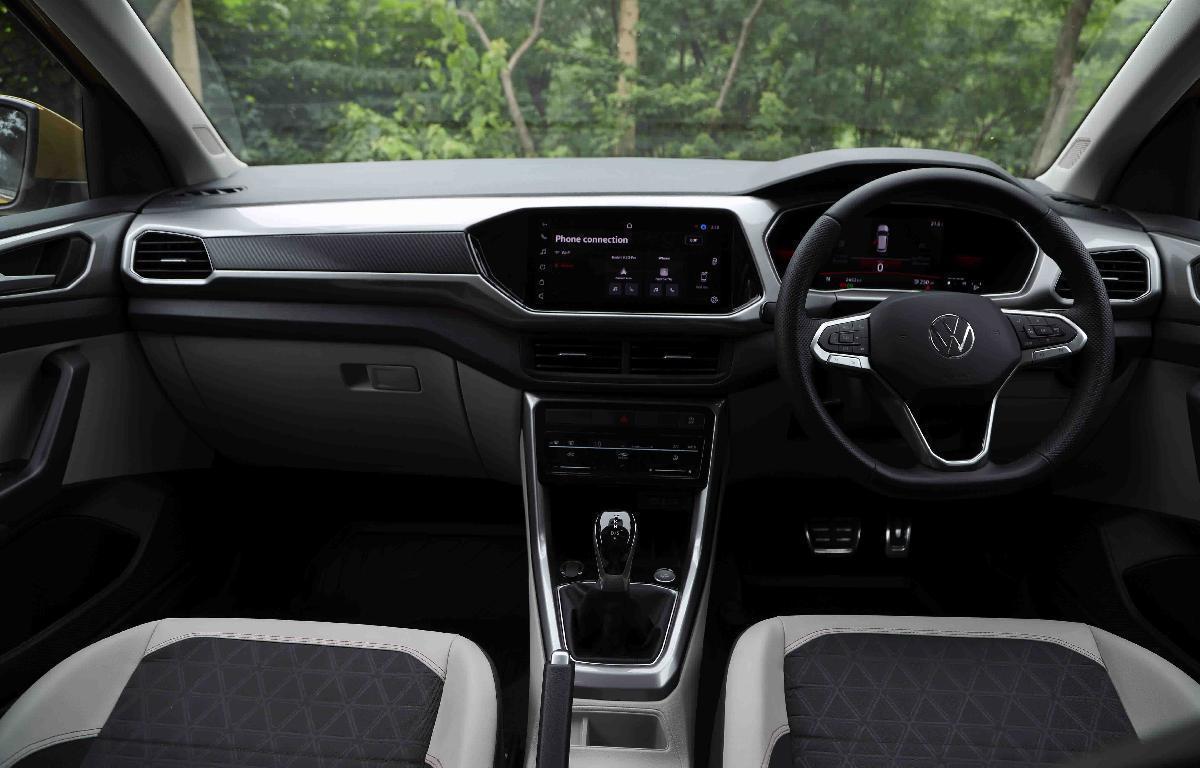 We really liked the way in which the Taigun’s designers have made clever use of different textured surfaces inside the cabin to create a feeling of abundant space. Take the area above the dashboard for instance, which uses soft touch materials as well as hard plastics the designers at VW have created a semblance of space by not cutting out a part of it for storing knick-knacks or even an idol, which we Indians have a penchant for. It is as if the designers have taken care to ensure that they don’t use up every conceivable free space by turning it into a cubby hole to stow away things. In fact, it almost seems as if the designers want you to breathe and not clutter your SUV with junk that you’ll probably never end up using. Having said that, there is enough space provided inside for your water bottles, coffee cups and coins. The glove compartment is well-sized and can accommodate a few other things besides the SUV’s User Manual and other documents that you may want to keep in there. 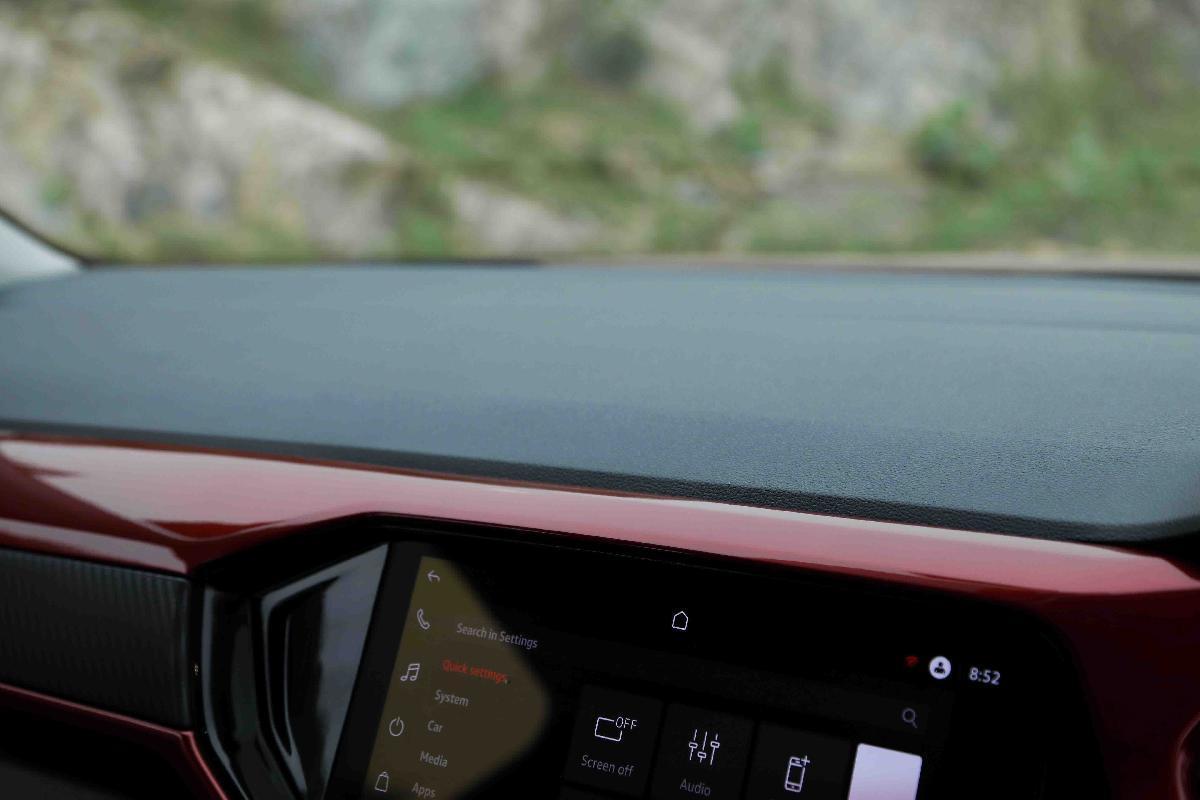 The biggest distinguishing factor besides the sunroof which the MT misses out on is the instrument cluster. The Taigun MT gets the old fashioned analogue dials. 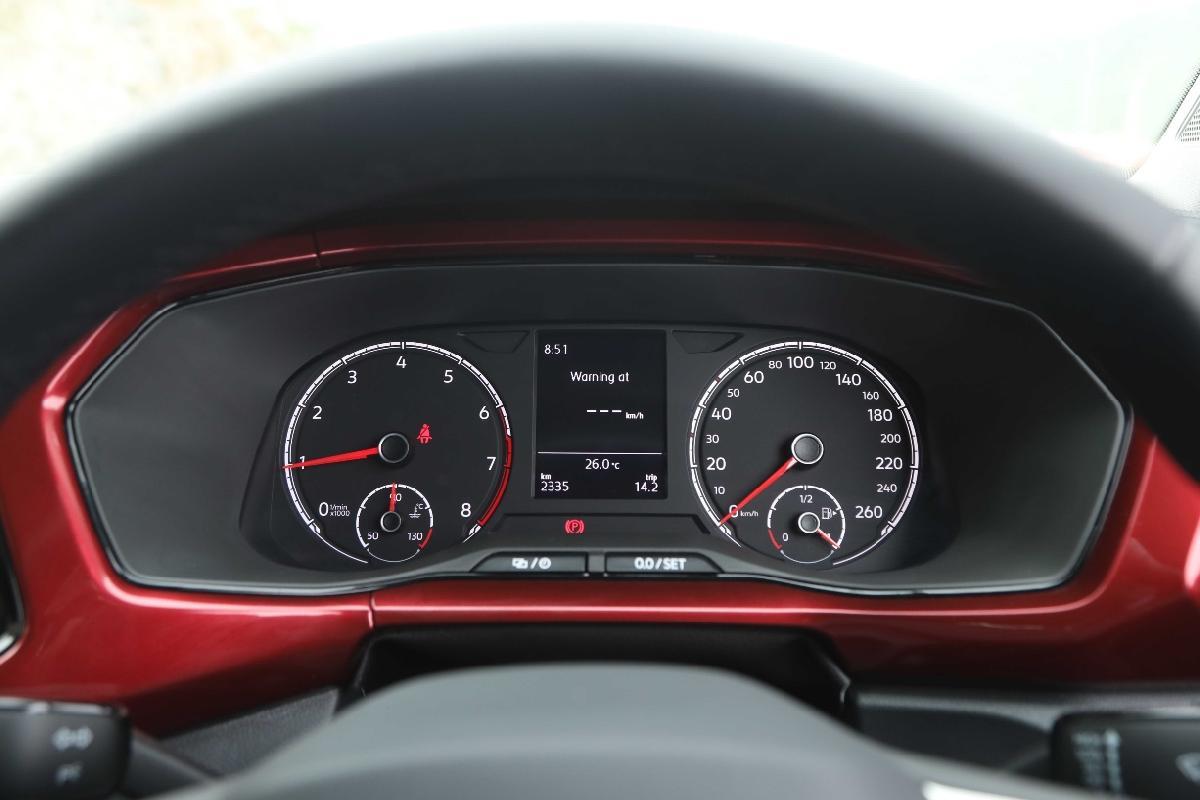 However, if you want the crisp digital display, you will have to opt for the Taigun AT. 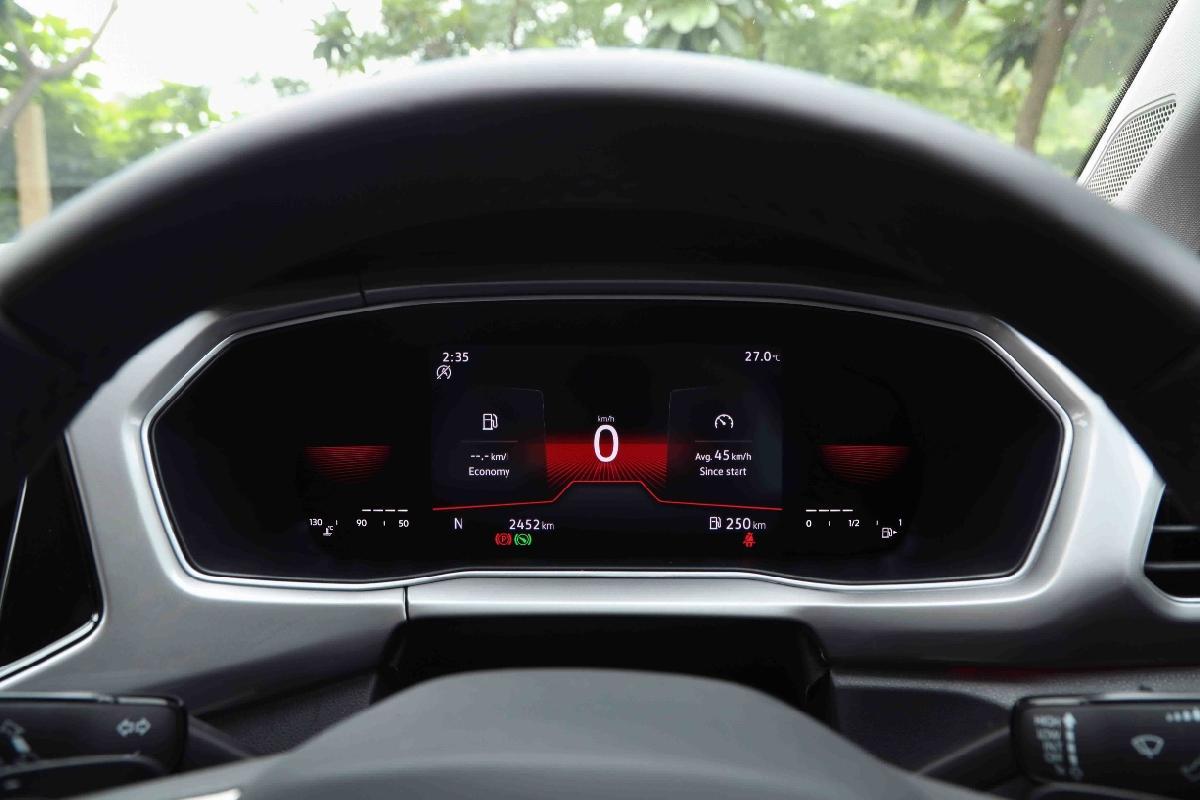 Then, there is the really high-quality infotainment system with a large display that comes with one of the best haptic touch screen technologies that we’ve seen and it is a real joy to use. The display is super crisp, and the responsiveness is what can be best described as “the next-level.” The size of this display and of the icons inside, in our opinion is so good that we had absolutely no problem using it while driving as our dominant hand gripped the steering and the non-dominant hand played around with the settings on the Infotainment system. The overall experience was truly effortless which isn’t always the case with many of the infotainment touchscreens out there, many of which actually border on the irksome and the dangerous, making you prone to pressing the wrong buttons often as well as to accidents. 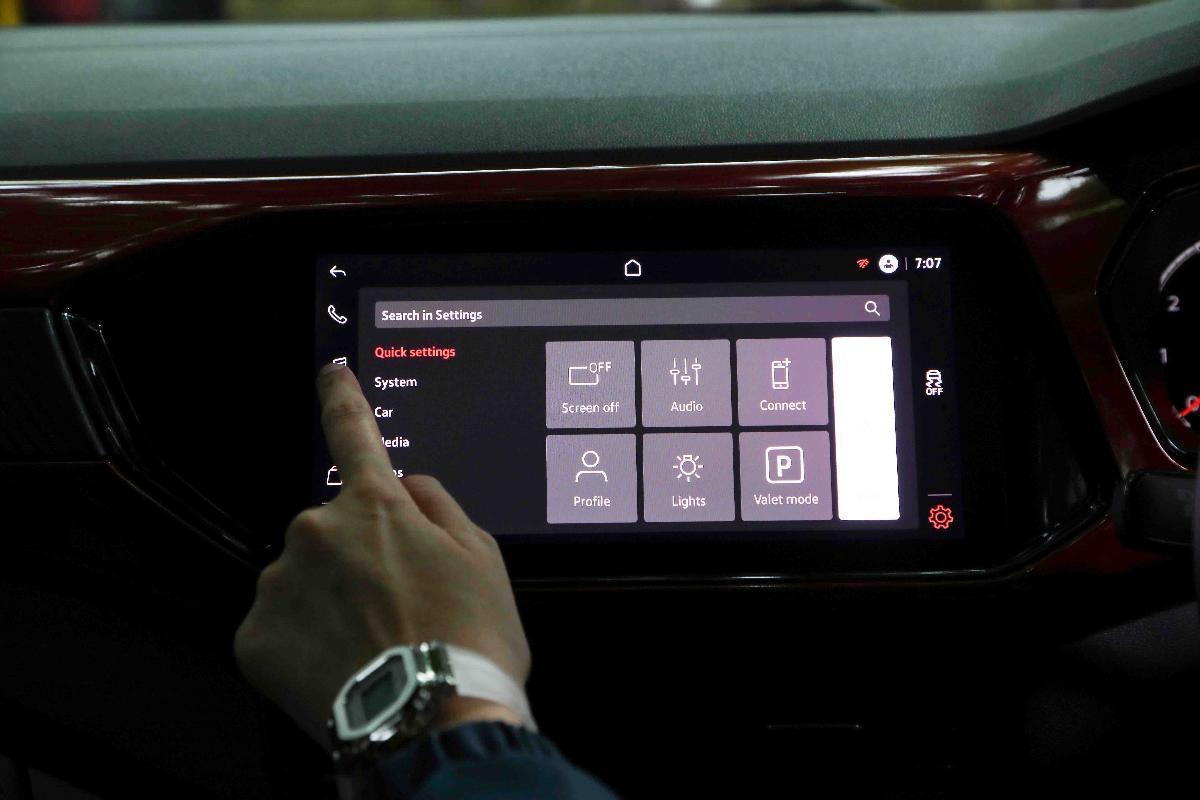 The Taigun also gets a well-located, easy to reach, wireless charger along with C-type ports to ensure that your gadgets never run out of juice while you’re on the road. 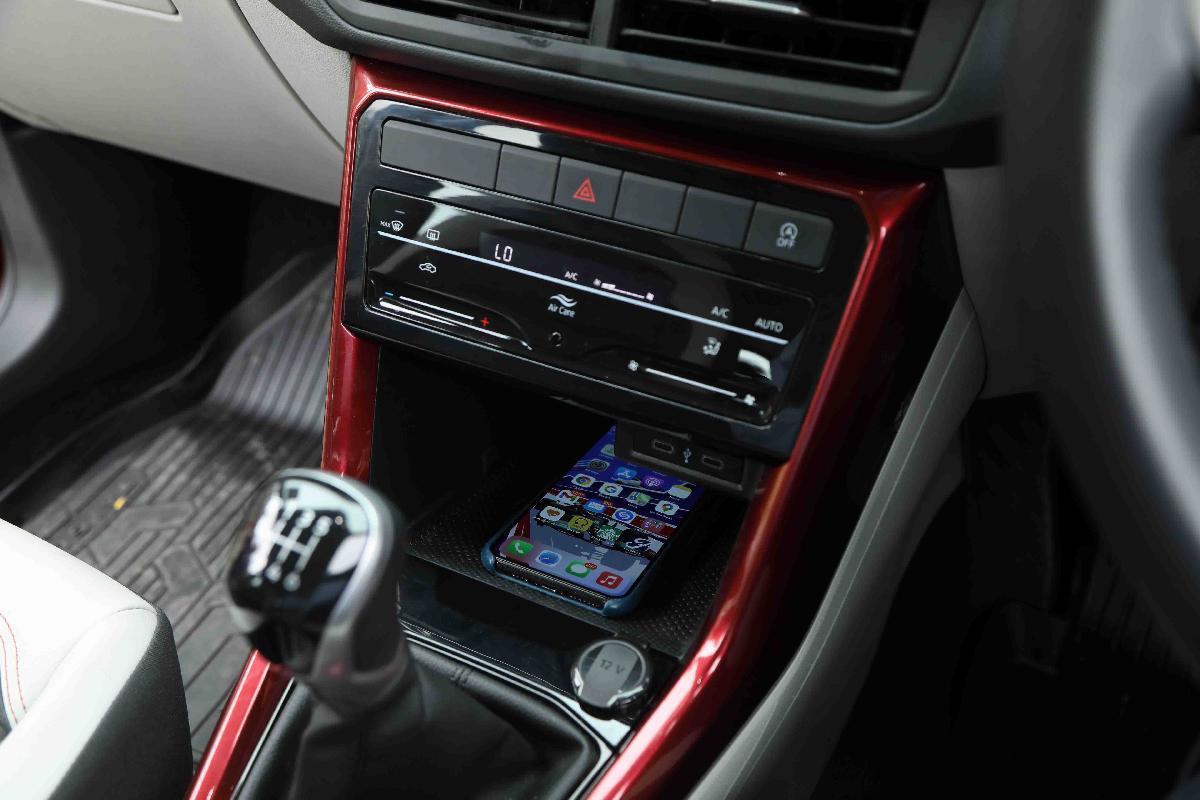 The aesthetic use of grey on the seats gets a thumbs up from us for the pleasing manner in which the dark and light shades of grey have been combined to further enrich the cabin of the Taigun. The rear seats are comfortable and best suited for two, although three also can fit in but that will have to be a bit of a squeeze for grown-ups. The rear occupants also get air-con vents and C-Type ports for charging their gadgets. 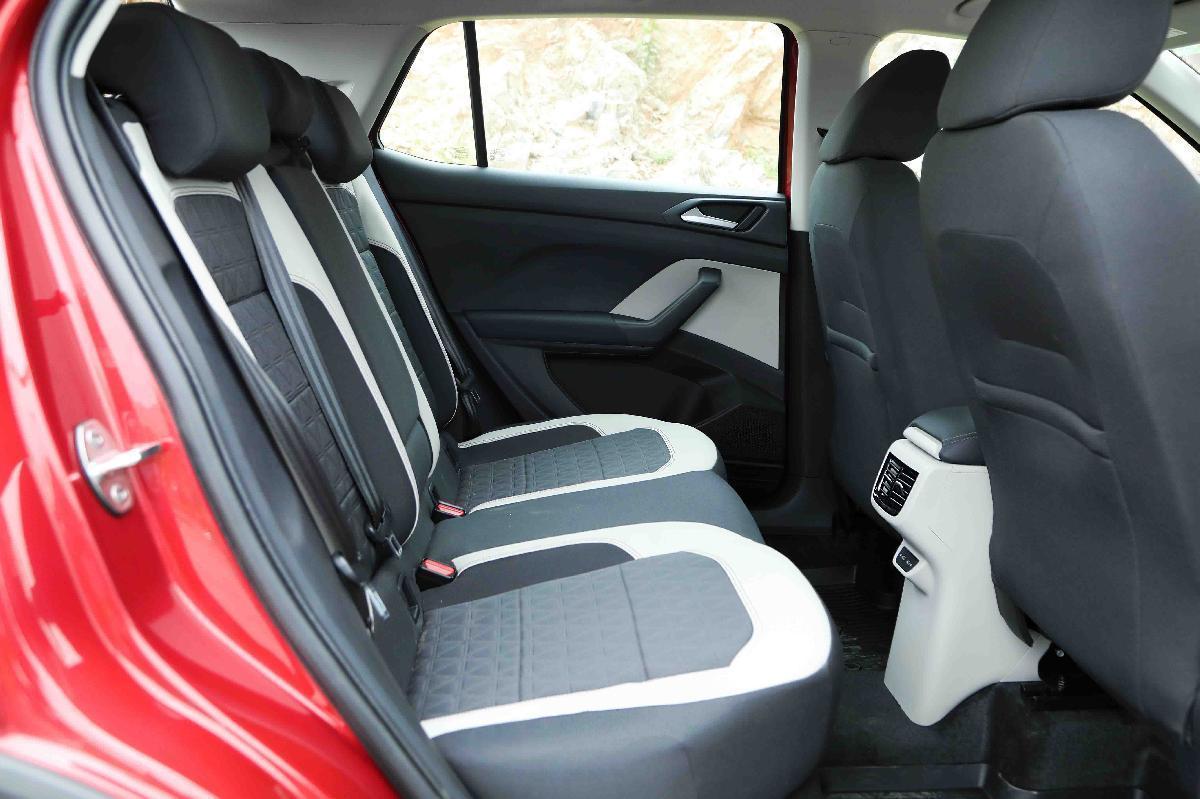 Under the bonnet is the silky smooth 4-cylinder, 1.5-liter (1498cc) world-renowned TSI engine that is mated to a 6-speed manual and a 7-speed DSG gearbox that belts out 150 PS @ 5000-6000 rpm and 250 Nm of torque @ 1600-3500 rpm. (We drove both the MT and the AT). Volkswagen’s DSG gearboxes, as we have seen in the past, have always been a hit with driving enthusiasts, but this time around we have to say that the real fun was had with the manual transmission. We simply loved the way it pulled and how it made slotting the gears both while upshifting and downshifting so much fun giving us such absolute control of the Taigun at breakneck speeds on the highways, at road bends, as well as while ambling at low speeds on the city’s crowded streets. 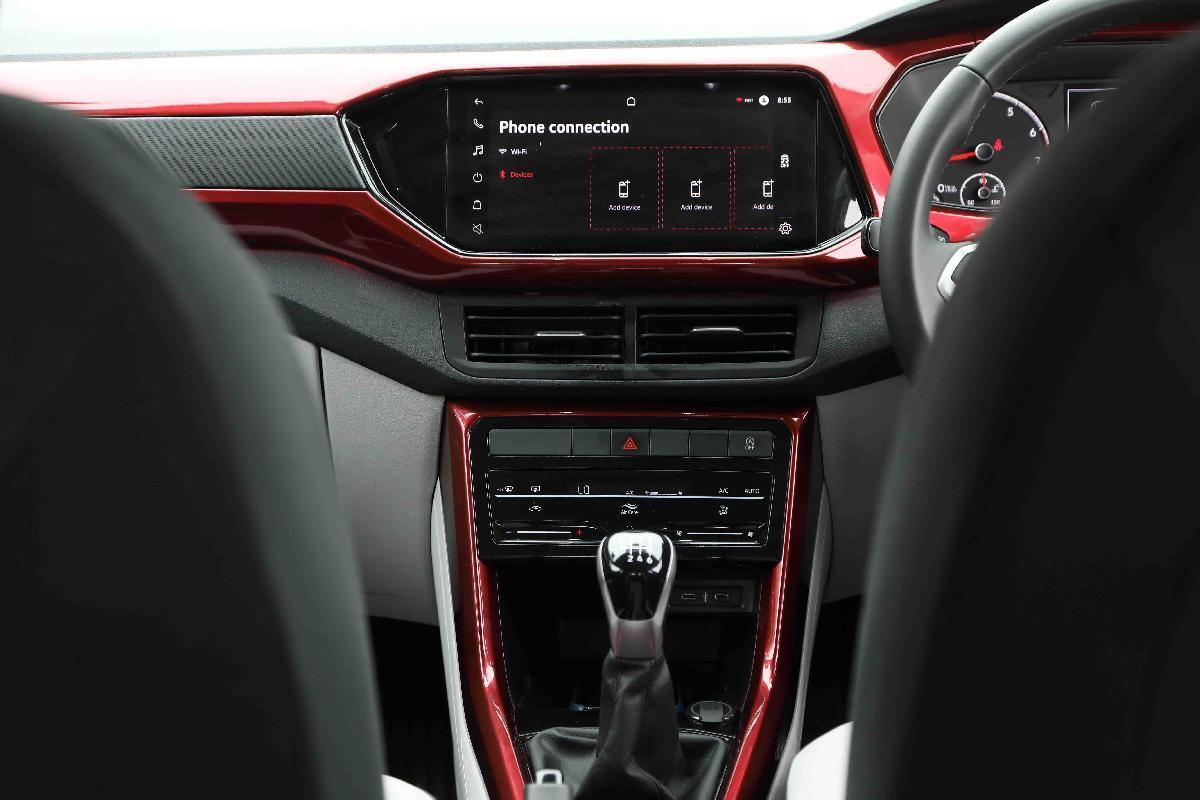 The 7-speed DSG gearbox is very good as well, it is just that we found the manual transmission more engaging with really clean gear changes and a smoother driving experience than its automatic counterpart in all the gears. 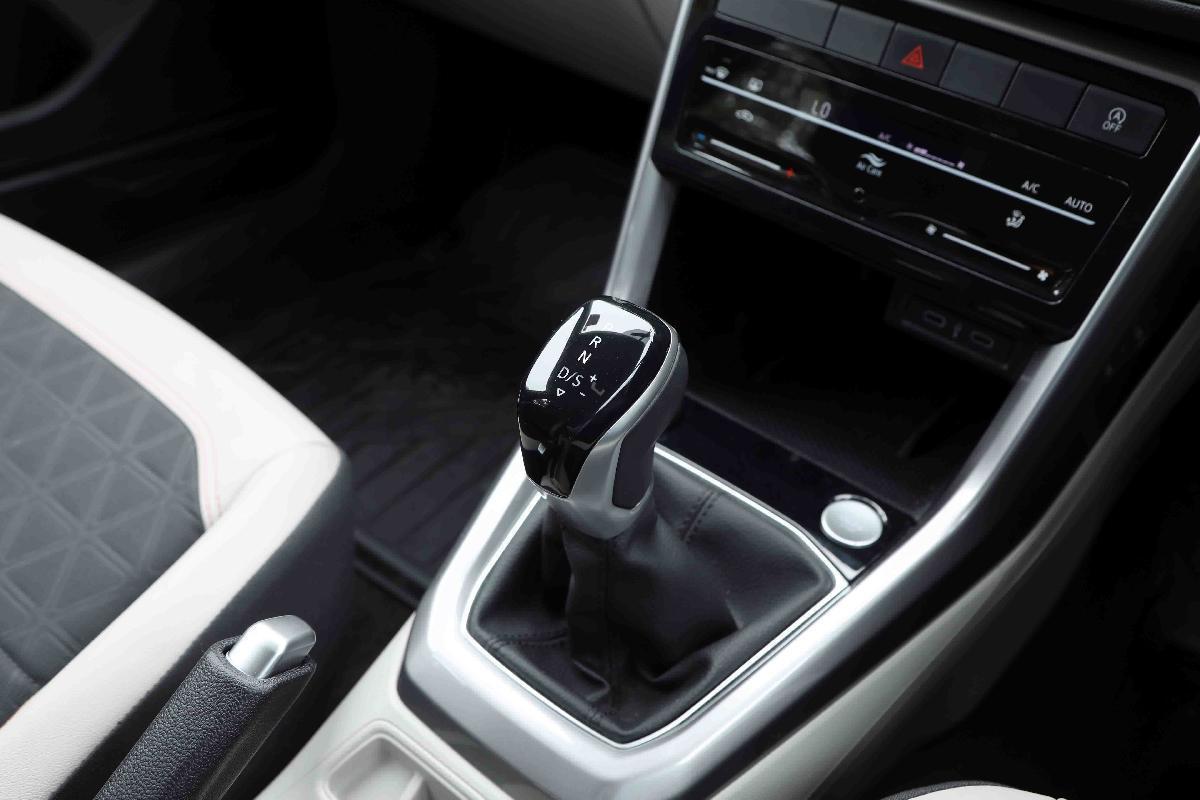 The electro-mechanical, chunky, flat-bottom, steering  with the gorgeous VW logo set so beautifully at the center of the Taigun is a sheer delight and we just loved flooring the Taigun, doing some insane speeds well over 180 kmph. 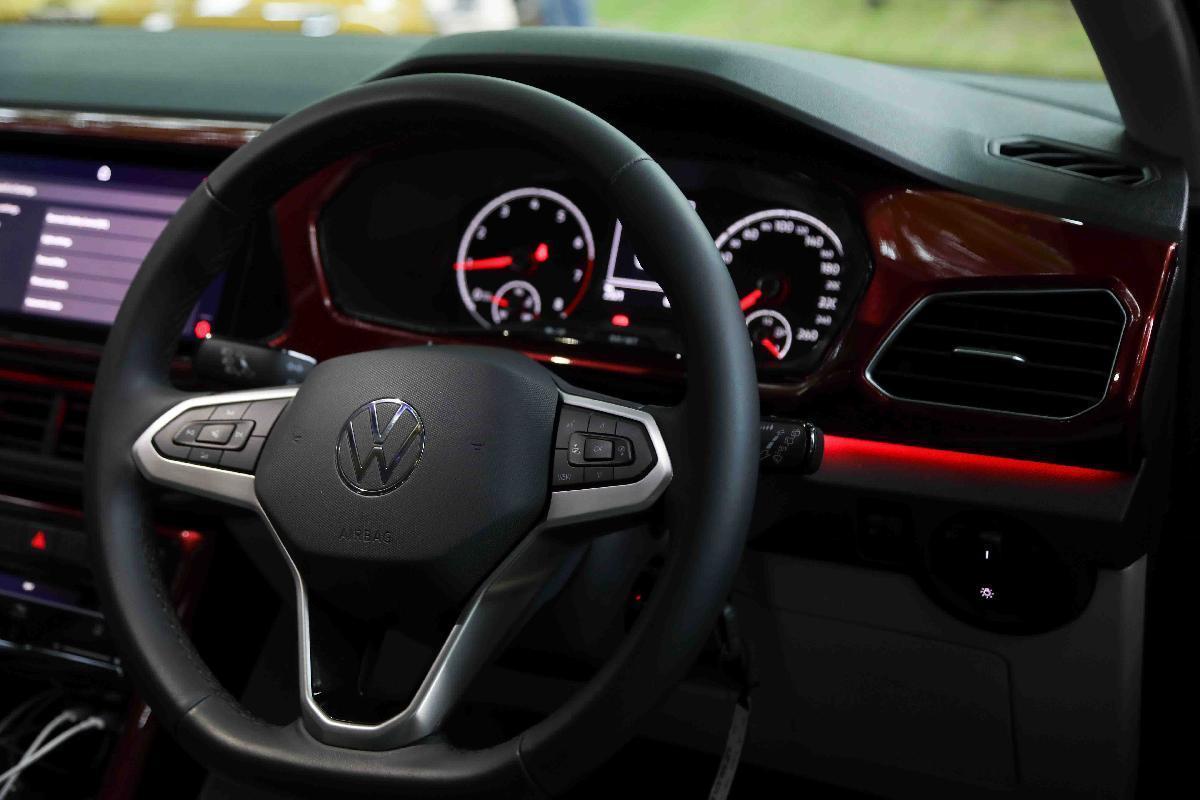 The best part – the Taigun’s performance can be described in one word - Astounding! The SUV felt supremely well-planted and there was hardly any body roll at all. The rock-solid stability that the Taigun demonstrated at high three-digit speeds is truly remarkable and the suspension set up ensures that you don't feel the slightest undulations resulting in a comfortable ride. It is precisely for these reasons that the Volkswagen Taigun makes for a compelling buy. Furthermore, the combination of disc and drum brakes demonstrated the Taigun’s braking prowess to us during our drive. Needless to say, it comes with a gamut of safety features too. 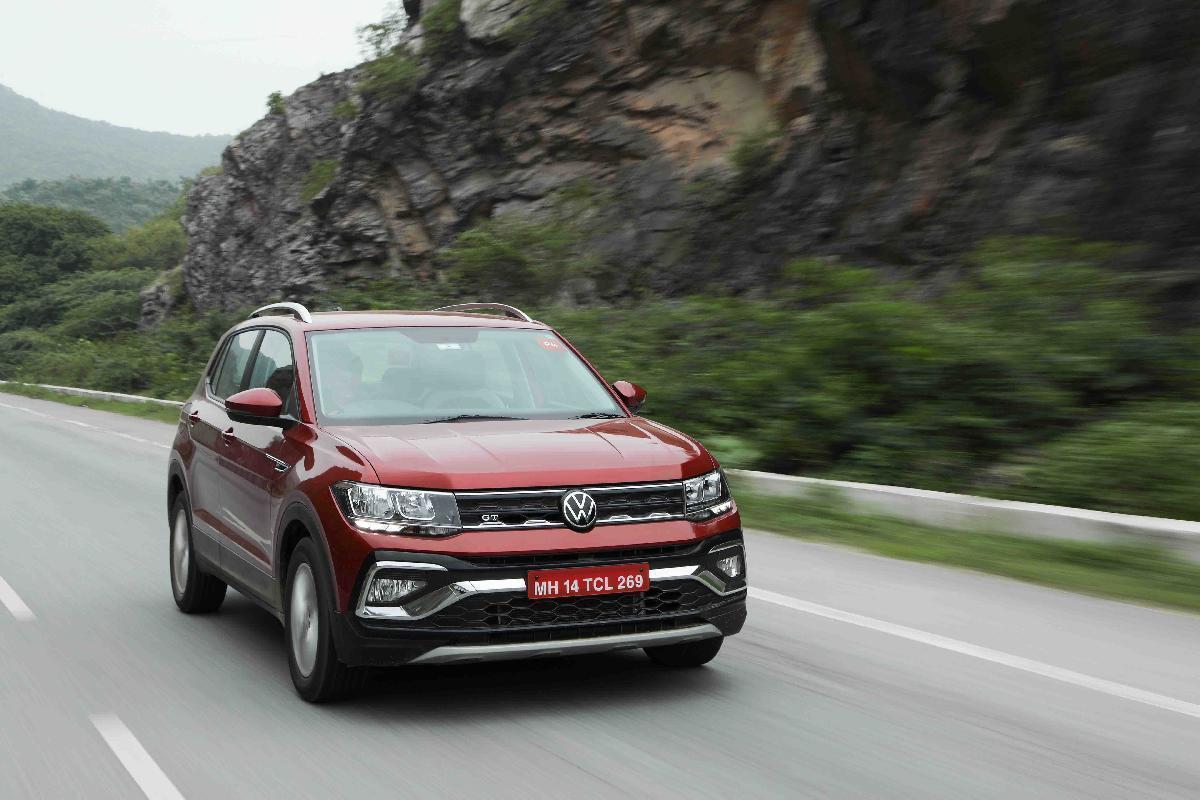 With the Taigun, Volkswagen, continues its legacy of bringing us fun-to-drive cars. The Taigun is a cheeky SUV. If you opt for the manual transmission, you’ll simply fall in love with its super swift gearshifts and its agile nature. Not to mention the peace of mind that it will bring knowing fully well that it is German engineered. It’s 50-liter fuel tank capacity simply means just taking off and indulging in miles and miles of spirited driving to your heart’s content. 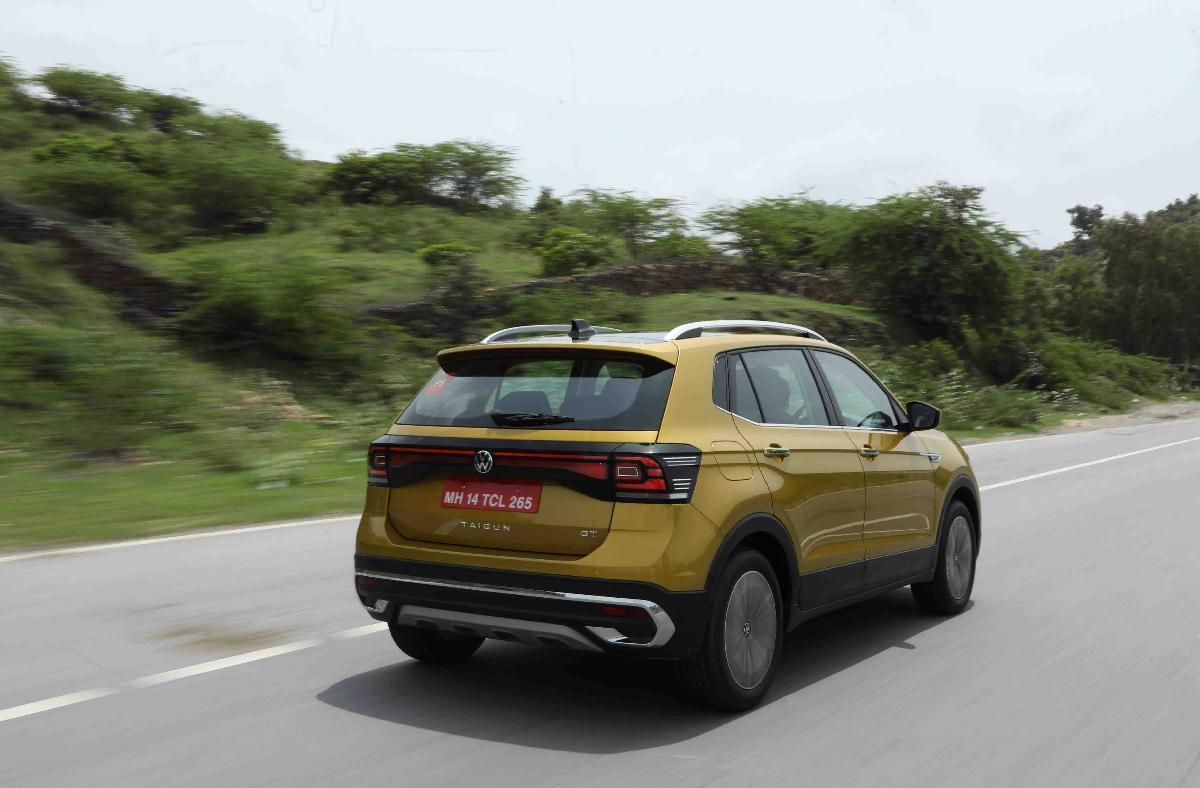 We learn that the Volkswagen Taigun is all set to undercut competition in terms of pricing and if that indeed does happen at the launch later this month, rest assured, that your money will be truly well spent. And even if that doesn’t happen, other car manufacturers just need to pull up their socks because the Volkswagen Taigun is all set to T-Bone their sales. From now, it is just #TussleModeOn.