Volkswagen Virtus: The Heartthrob of 2022

Volkswagen Virtus may share underpinnings with its cousin Skoda Slavia, but make no mistake, this gorgeous sedan will take no time to create its own distinct identity and come into its own.

The Volkswagen Virtus has ranked pretty high up on our list of #MustDriveCars2022, and let’s just say that when we drove it recently, it exceeded expectations by ticking all the boxes when it came to Design, Connectivity, Comfort, Performance, and Safety. Here’s what we think of it…

That the Volkswagen Virtus set our pulse racing during its global unveil, earlier in March this year, is no exaggeration! Not only was it stunning to look at, but the fact that both its Dynamic Line, as well as its Performance Line, were equally appealing was something that truly fascinated us because it isn’t every day that you come across a car where both trim lines hold an equal appeal. What Volkswagen has managed to do is draw the distinction between both cars brilliantly, thereby making the choice for prospective Virtus buyers that much simpler. The Dynamic Line will appeal to those out there who are looking for a no-fuss car for their driving needs, the kind that can serve the dual purpose of driving to work as well as family outings, whereas the Performance Line should appeal to the hard-core driving enthusiasts who not only want to stand out from the rest but also want to experience that adrenalin rush every time they get behind the wheel. Both trims look sharp and super stylish thanks to the cuts and creases but it is other details such as the 16-inch alloys, lip spoilers, GT badging and red brake calipers that sets both trims apart. Given the fact that Volkswagen has had a pretty good track record with their sedans, whether it was the Passat, the Jetta or the Vento, the Virtus, which will sit above the now discontinued Vento (Which will continue to be sold in the used car market) is bound to delight many a buyer. Afterall, it looks promising and the way the front fascia with its beautiful slats as well as spectacular headlamps and DRLs has been designed, not to mention the rear which has a hint of their previously launched SUV, the Taigun (Also built on the same MQB-A0-IN platform), in terms of the smoked-out finish on the LED tail lamps, is enough to tell you that this fresh design isn’t going out of style anytime soon. Also, you get 521-Litres of boot space which we realized was much more than what we really needed or would eventually use. 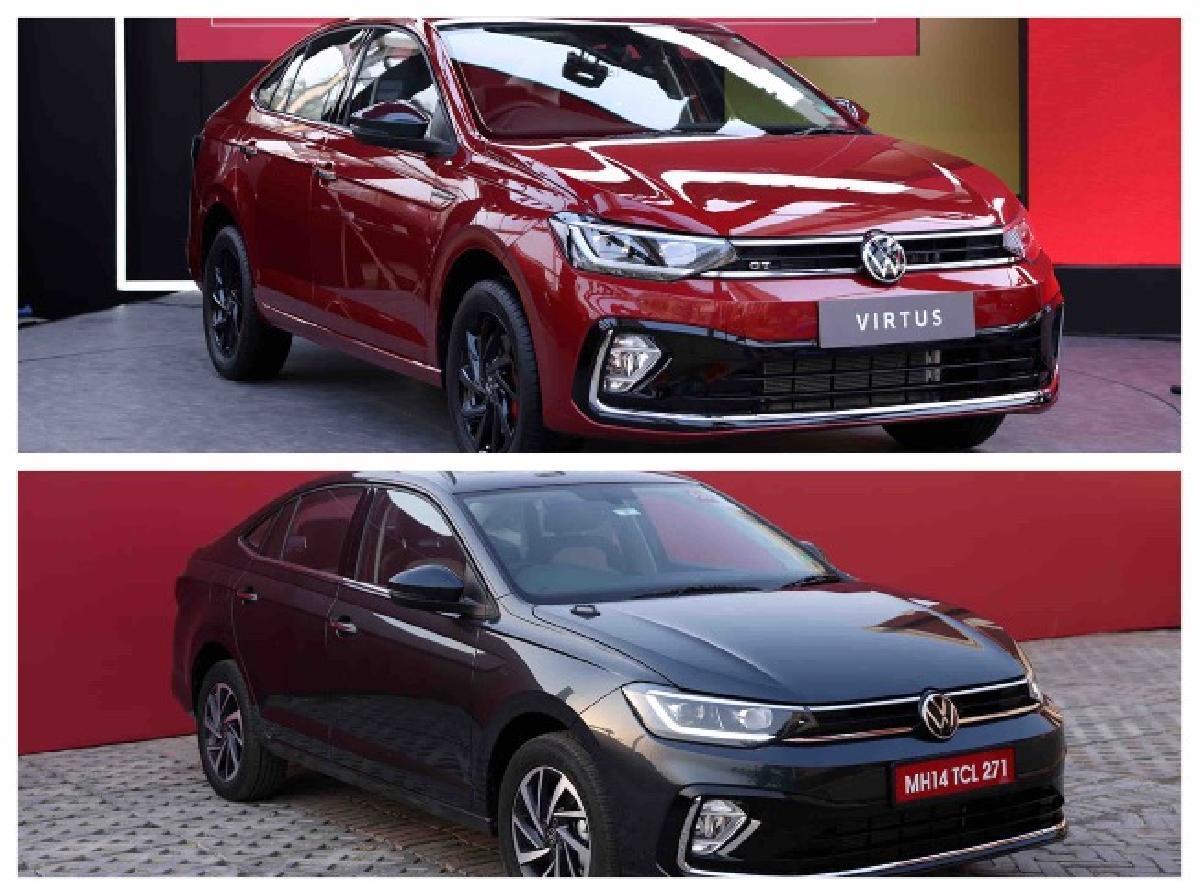 Inside, the Virtus is a typical Volkswagen with practical interiors that are well-built and exude top notch quality. The interiors, whether it is the dash, the buttons and the knobs, the air con vents or the seats, both beige and black as well as the grey with red contrast stitching everything has a premium feel and brings a smile to your face, knowing that this is definitely money well-spent. What we really liked is how the car manufacturer has provided a distinct look by offering two different finishes, one in grey and the other in red on the dash which you can pick based on your preference. While we really liked the firmness of the Virtus’ seats, we also loved the fact that they were ventilated, providing us great comfort during our drive on a rather hot day on the roads of Punjab. The way in which Volkswagen have upped their game in terms of the entire digital experience is truly commendable and everything from the 10-inch infotainment system to the 8-inch digital instrument cluster to the aural experience via their 8-Speaker music system, everything has been extremely well-executed on the Virtus. The audio quality is excellent and in fact, while driving near the Indian border, we were even able to listen to News from a radio station in Pakistan. The Virtus also comes loaded with some sensible connectivity features and in fact, everything within feels just right in the way they have gone about it, refraining from going OTT. Everything from their infotainment system to their instrument clusters to their music system to the wireless charging, gives the driver and the occupants the feeling of enjoying an experience that is truly contemporary and the German engineering is evident in every detail of the sedan. 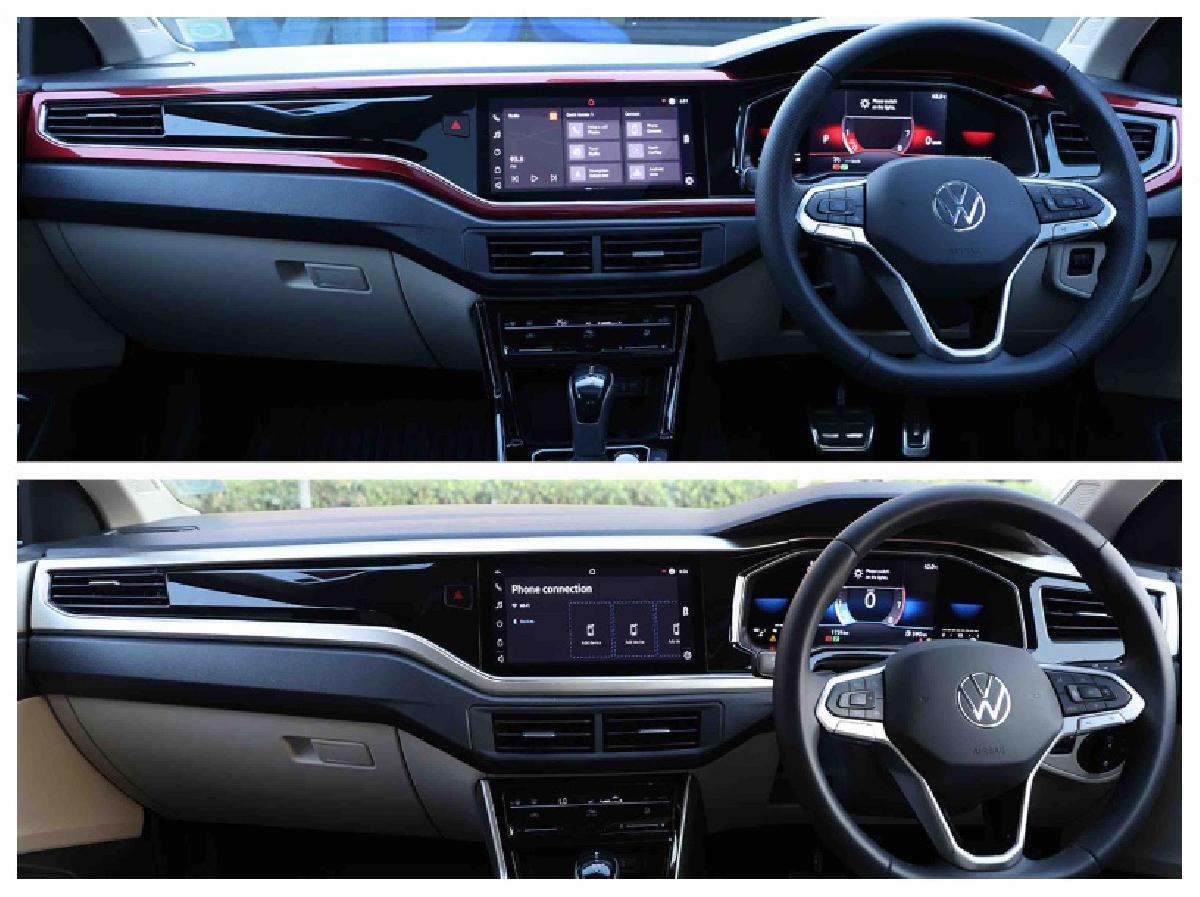 The Virtus gets a 4-Cylinder, 1.5-Litre TSI EVO engine with ACT (Active Cylinder Technology) and there is also a 3-Cylinder, 1.0-Litre TSI engine. In terms of transmission, you get a 7-Speed Direct Shift Gearbox (DSG), a 6-Speed Automatic Torque Converter (AT), and a 6-Speed Manual Transmission. While the Dynamic Line puts out 115PS of power and 178Nm of torque, the Performance Line puts out 150PS of power and 250 Nm of torque. We drove both and believe us when we say, both will have takers and not just because there are several Volkswagen fans out there who are looking for a sedan just like the Virtus but because of the German engineering that puts this latest offering from the car manufacturer in a completely different league. Both cars come with tilt and telescopic steering and deliver outstanding performance whether it is driving at city speeds which can be fun with a punchy mid-range or going full throttle on the highways. You can also drive in the Sports mode which is always fun and opt to use paddle shifters too. The 3-Cylinder 1.0-Litre does get audible after you’ve crossed the 3500rpm mark but that’s hardly anything and can be completely ignored in favour of the entertainment that the overall sedan delivers. The 4-Cylinnder 1.5-Litre GT is easily one of the smoothest sedans we have driven in a while and we loved the way it drove on our roads. This is a sedan that feels every bit worth the money that you will be paying for it. Not only does it drive well but it also brakes well and comes with a host of safety features to keep you safe. 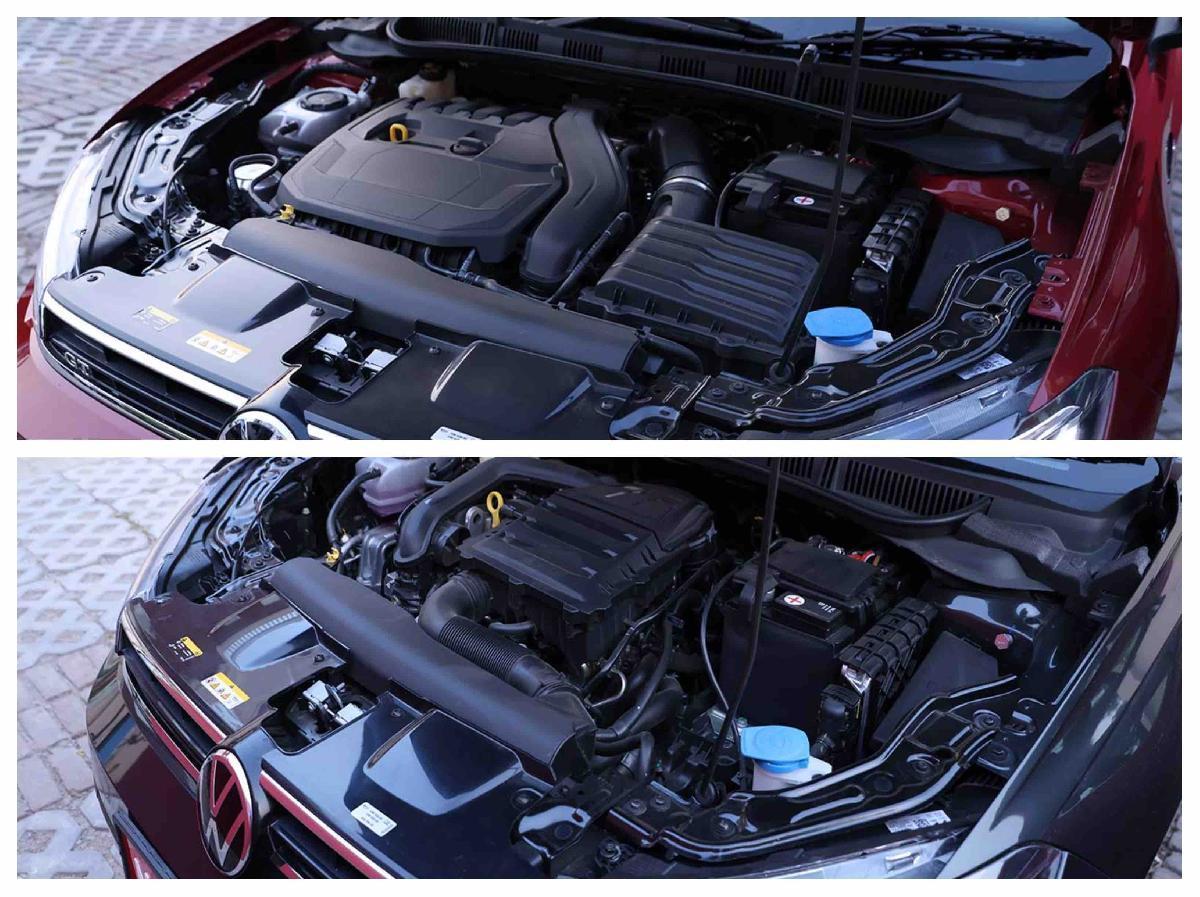 Safety, of course, is very germane to this German sedan. Being German engineered, the Virtus has a big focus on safety. The Virtus is not just built like a tank but also comes with some of the latest technologies to keep you safe. Be it the Traction Control System or the Hill Hold Control or the Multi Collision Brakes, everything speaks volumes about how Volkswagen have put everything on the Virtus to make it a really safe sedan, not to mention six airbags.

What we particularly loved are the dimensions of the Virtus. This is not only the longest car in the segment at 4561mm with a wheelbase of 2651mm which frees up quite a lot of space for occupants inside but is also the widest car at 1752mm, thereby giving you enough head room, shoulder room and leg room, both at the front and at the rear, so that you are comfortably seated without jostling for room. Also, its height is 1507mm which gives the Virtus a very sporty look and feel. The best part? This is just the kind of sedan you want if you want to do some handbrake turns and have some real driving fun with it. The Virtus is also a mile muncher and we were pleased as punch with it especially after checking out its 0-100 kmph performance of 9.0 seconds and its top speed of 190kmph. (However, we certainly do not recommend you drive so fast and urge you to exercise great caution while driving.) The GT is undoubtedly the one to get if you’re going after performance and yes, it definitely will give you that ultra-smooth ride, thanks to its excellent ride quality. 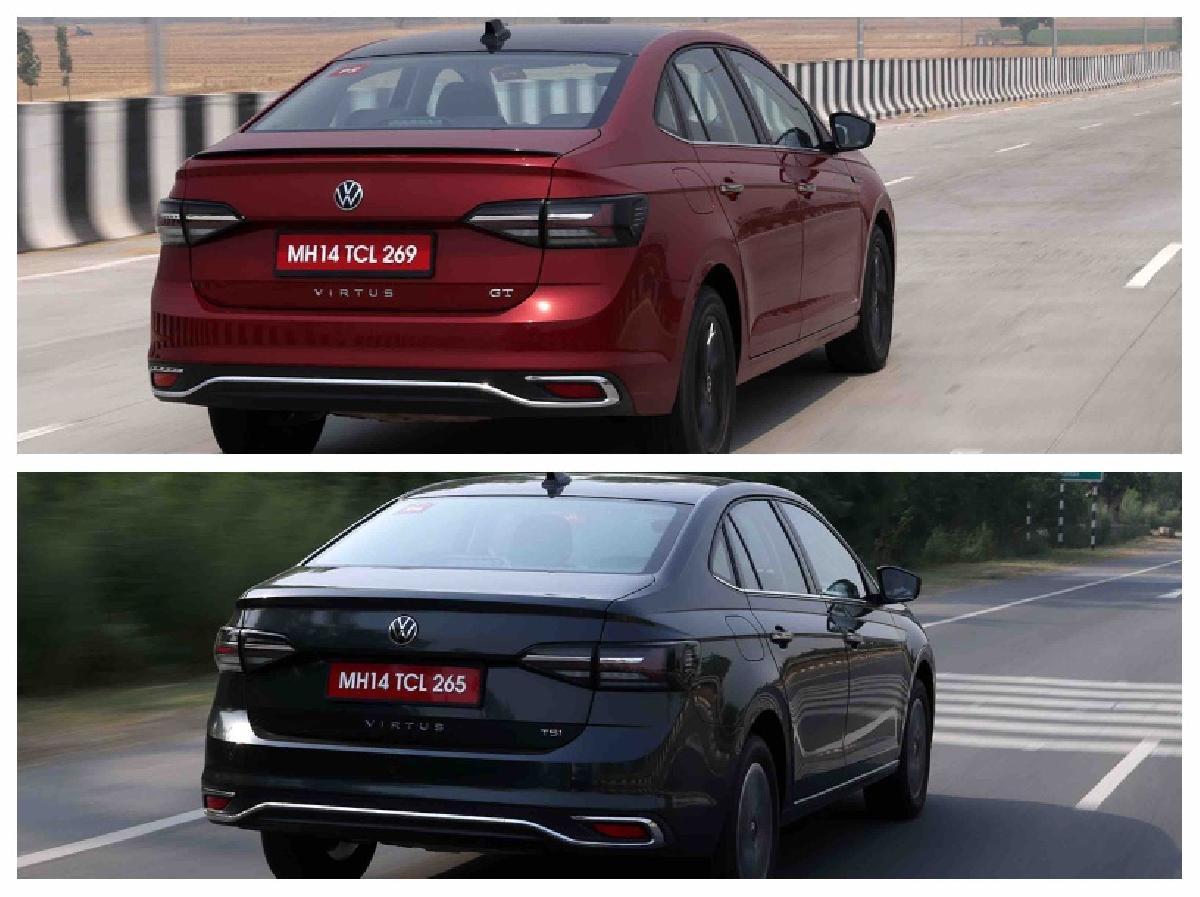 Of course, eventually, it all boils down to your specific driving needs, driving style, and about how much money you are willing to splurge on a well-made, German engineered sedan. Volkswagen would do well to price it right which would mean anything between INR 11-19 Lakh, but then it wouldn't be far-fetched to say that Volkswagen does have a way of surprising us from time to time.

One thing is for sure though, whatever variant you pick, the Volkswagen Virtus, will definitely turn your otherwise boring daily commute into an exciting track day, every day!