Here’s a look at what’s headed your way in the coming months. Keep your eyes peeled for these sleek and shiny cars.

Though the Indian automotive scene did face some headwinds due to the slowdown followed by the Coronavirus pandemic, manufacturers across the country are now trying to steady their ships and surge ahead as the ‘new normal’ takes over. With a steady stream of launches scheduled in the coming months, leading up to the festive season, a time when many new automobile purchases are made in India, we bring you a selection of cars that auto manufacturers are gearing up to launch.

Audi RS7: If you’re looking for raw power then the second-generation RS7 which will break cover in July, will not disappoint you. Powered by 582bhp, 4-litre twin-turbocharged V8, that belts out 800Nm of torque, it is expected to set you back by approximately INR 1.8 Cr. The RS7 will compete with BMW M8 and Mercedes-Benz AMG GT 63 4-Door. While the previous generation RS7 churned out 552bhp of power, the Competition trim edges out the upcoming model by an additional 15bhp. The RS7’s powertrain is mated to an 8-speed torque converter automatic gearbox and comes standard with Quattro all-wheel drive. The new RS7 goes from standstill to 100kmph in just 3.5 seconds.

In terms of design, it isn’t exactly a radical departure from its predecessor however, there is nothing subtle about this Sportback. It continues to be a low-slung coupe, but now, it sits lower as the new RS is wider. The front grille, now bigger and all black, gives the RS7 a more aggressive road presence. New LED head-and taillamps with slat designed DRLs go on to complement its bad-boy image.

The cabin layout though similar to the A7, the RS, gets specific ‘RS seats’ wrapped in premium leather. There is also a 12.3-inch all-digital instrument cluster while the center console houses dual touchscreen units. The RS7 is all set define luxury as it aims to be the benchmark in its class.

Audi recently opened bookings for this four-door Sportback with a downpayment of INR 10 lakh via their website and dealerships. Audi Q3: The all-new second-generation Q3 was first showcased at the Paris Motor Show in 2018 and though reports suggested that the Q3 would make its India debut in the first quarter of this year, it was not to be, thereby resulting in a delay.

Though the Audi Q3 is available in three petrol and two diesel engine options in the international markets, going by Volkswagen Group’s decision to go all petrol in India, we can expect the 2.0-litre 40 TFSI quattro with a 7-speed dual-clutch gearbox to make its way into our market. With 187bhp and 320Nm of torque, the Q3 does 0-100kmph in 7.4 seconds. It will take on Volvo XC40 as well as BMW X1 and Mercedes-Benz GLA. Meanwhile, both BMW and Mercedes-Benz will continue to sell both petrol and diesel engine options.

The curves on the Q3 have been replaced by straight edgy lines. The toothy grille with vertical chrome slats may not be to everyone’s liking, but it is certainly is an attention grabber. The new jagged shaped full-LED headlights add a dash of sportiness to its overall appearance. The top-of-the-line variant will be equipped with 10.1-inch infotainment screen, but unlike its more expensive siblings, the Q3, will not boast a touchscreen climate control as it retains its rotary dials. In addition, the Q3 will also get a 12.3-inch virtual cockpit instrument cluster. Expected to arrive by September, it will be priced between INR 38-45 Lakh. 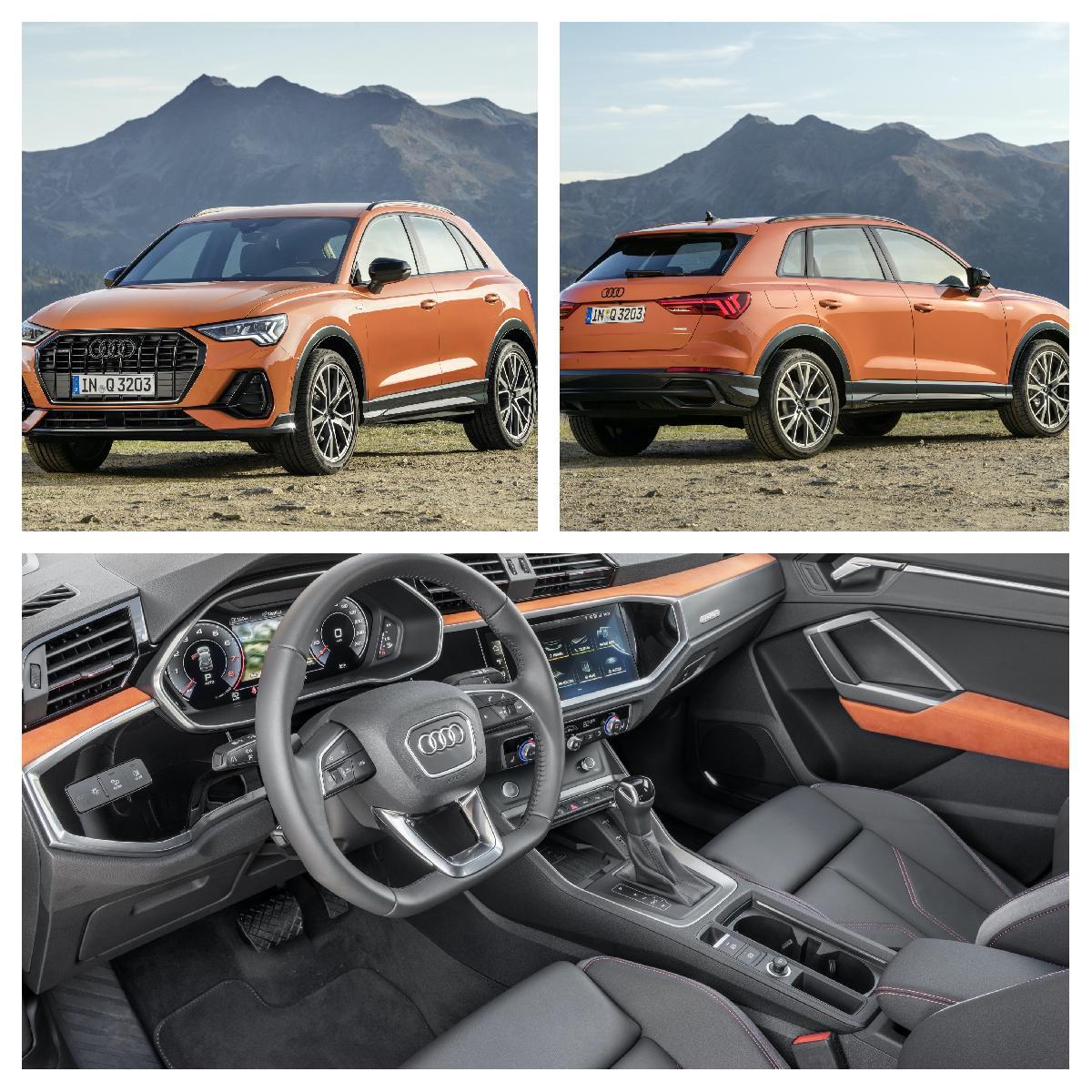 MG Gloster: MG’s flagship SUV which was unveiled this February at the Auto Expo 2020 is expected to make its India next month. Positioned slightly higher than the likes of the Toyota Fortuner and the Ford Endeavour, the Gloster, did receive a positive response at the Expo.

In China, the Gloster, which is called Maxus D90, is available in both petrol and diesel engines, unlike the international market which only gets 214 bhp, 2.0-litre petrol with 350Nm of torque. Knowing how important a diesel SUV is for the Indian market, MG Motor will introduce a 2.0-liter diesel powertrain that offers 214bhp and torque of 480Nm. Initially, MG, plans to launch the manual version and later introduce the automatic variant.

The Gloster is an old school ladder frame-based SUV, which is longer and wider than the Toyota Landcruiser. The Gloster gets a massive all-chrome front grille along with elongated swept-back LED headlights and LED foglamps. Its side profile is quite muscular thanks to the bulging wheel arches and a thick C-pillar. The Gloster will come with a massive 12.3-inch touchscreen unit along with plenty of comfort, connectivity and safety features. Expected to take on Toyota Fortuner, Ford Endeavour and Mahindra Alturas G4, it is expected to be priced around INR 45 Lakh. 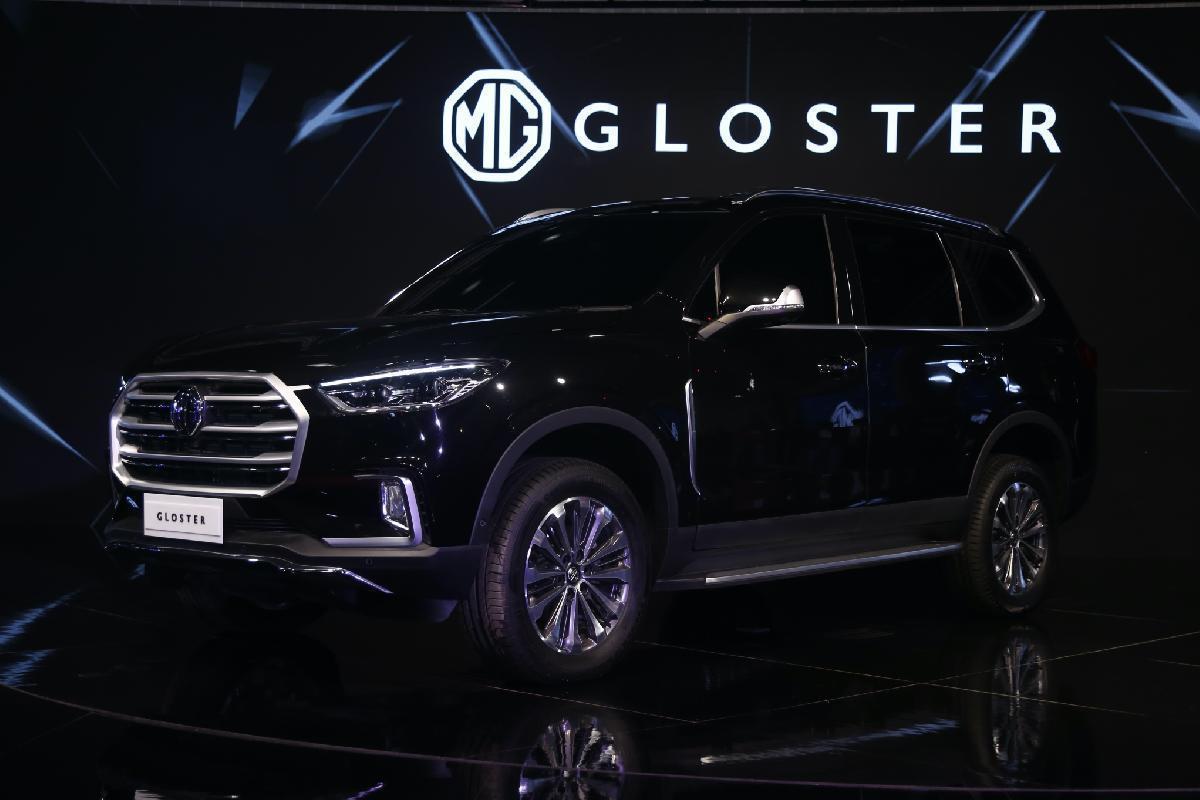 Hyundai i20: This hatchback besides being one of the most popular cars in its segment is also a very important for Hyundai in India. Hyundai has confirmed that there will be no delay in the launch of the all-new i20 and will make its presence felt in the festive season, around September.

For the global market, the i20 will get 1-litre turbo in two trims — 99bhp and 118bhp — which will be paired with a 48-volt system that is supposed to increase the fuel efficiency by 3-4%. In India, we will get the 99bhp variant without the mild hybrid system. Along with that, the 82bhp 1.2-litre Kappa petrol motor will also be available. Currently, the i20 doesn’t get a diesel option, but it is in the pipeline and will soon get the 1.5-litre diesel. The specification of the powertrain will be identical to the Venue’s, 99bhp and 240Nm of torque.

Hyundai has made the new i20 very edgy with prominent character lines on the bonnet and ones that run across the side profile. The slimmer and longer headlamps and the Z-shaped rear LEDs make it look unique. In terms of dimensions, the new i20’s roof is lowered by 24mm, it is now 30mm wider, 5mm longer, and the wheelbase has also been increased by 10mm. In India, its length will remain more or less the same as the current generation since Hyundai wants to keep it as a sub-4-metre hatchback.

The new i20 will get an all-digital 10.25-inch instrument cluster and 10.25-inch center touchscreen console. Like the new Hyundai cars, it will come with connectivity Bluelink service, wireless phone charger and the top variant could also get a Bose music system.

Come September, the new i20 will take on rivals such as Maruti Suzuki Baleno, Honda Jazz and Toyota Glanza. Expect pricing to be between INR 6.8-11 Lakh. 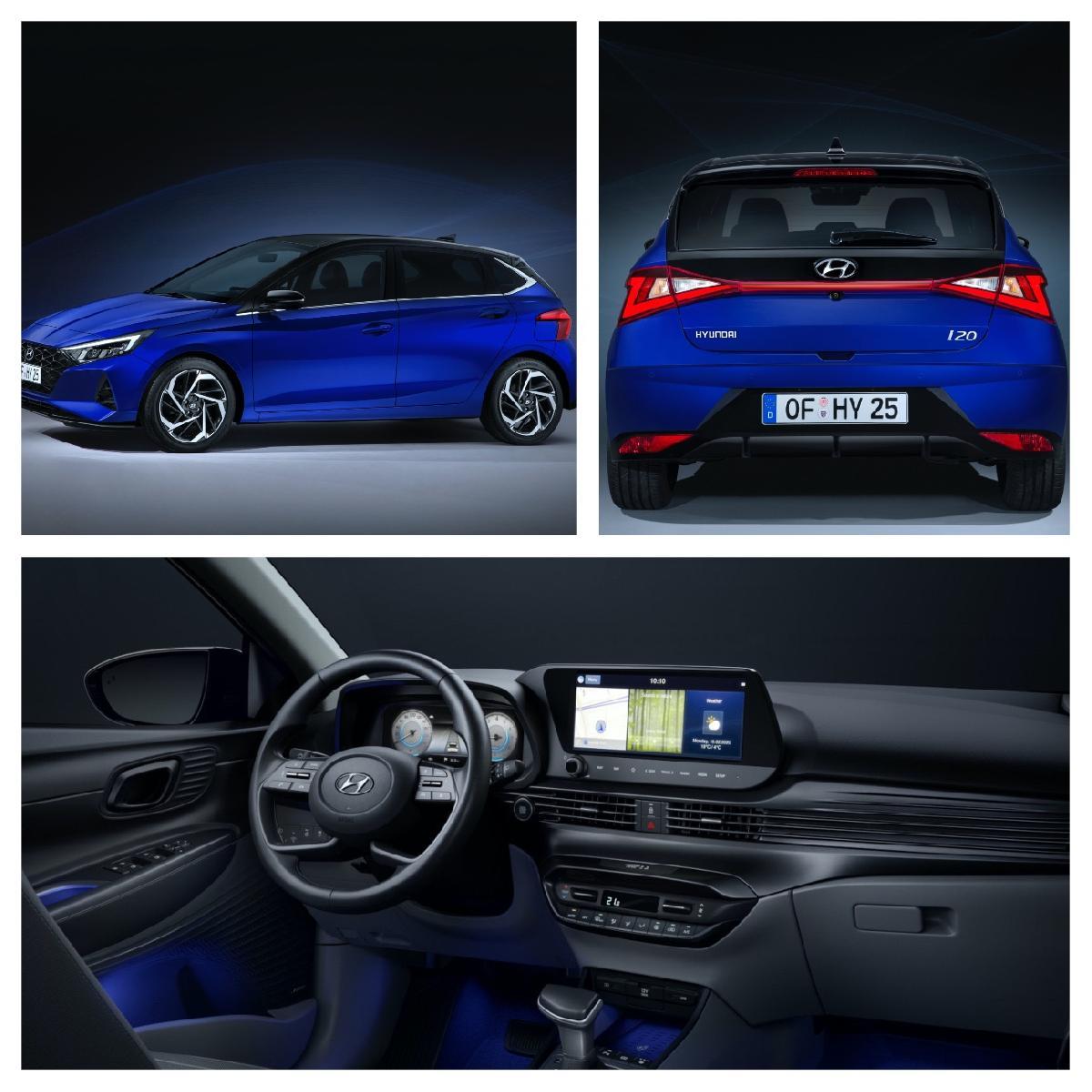 KIA Sonet: With the Sonet, which was unveiled at the Auto Expo 2020, in February, KIA. will be making an entry into one of the most competitive segments, the sub-4-metre SUV category.

The Sonet is expected to get Hyundai Venue’s powertrains—82bhp 1.2-litre Kappa petrol, 118bhp 1-litre turbo petrol and the 1.4-litre diesel with 99bhp of power. What’s interesting to note is that apart from retaining all the transmissions offered by Hyundai including the new clutchless 6-speed manual, KIA will introduce an additional 6-speed automatic trim for the diesel.

It is safe to say that the Sonet will be one of the funkiest yet aggressive looking SUVs in its segment. With the imposing tiger grille, large air vents and muscular bumpers, it does look tough and distinct. Not much has been revealed about the interiors, but the Sonet will borrow the 10.25-inch touchscreen unit from the Seltos along with features such as UVO Connect and the Bose music system.

Expected to be launched in August, KIA Sonet, will take on Hyundai Venue, Mahindra XUV300 and the upcoming Nissan Magnite. Expect pricing to be between INR 8-12 Lakh. 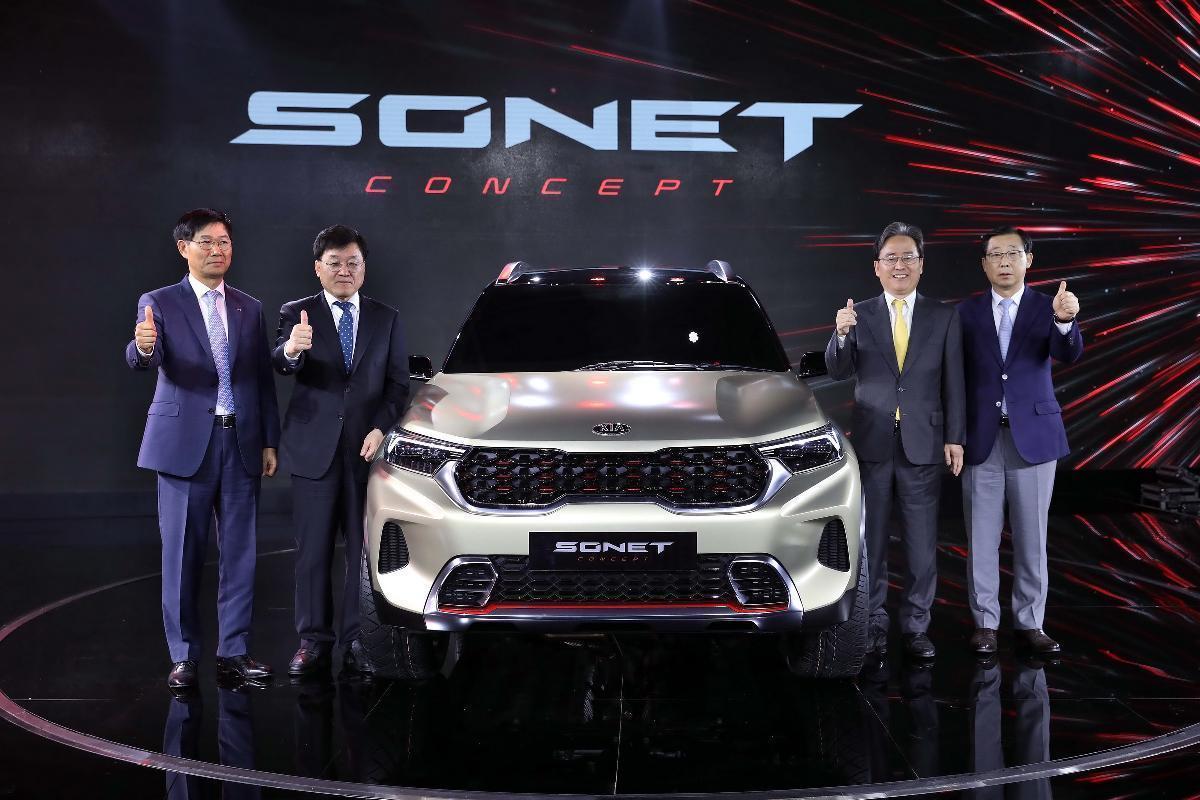 Nissan Magnite: After the launch of the BS6-compliant Kicks last month, the Japanese manufacturer is now gearing up to enter the sub-4-metre SUV segment. Though the name of the SUV hasn’t been officially confirmed, reports indicate that it will in all likelihood be called Magnite. The global unveil of this SUV is expected to take place on July 16, 2020. 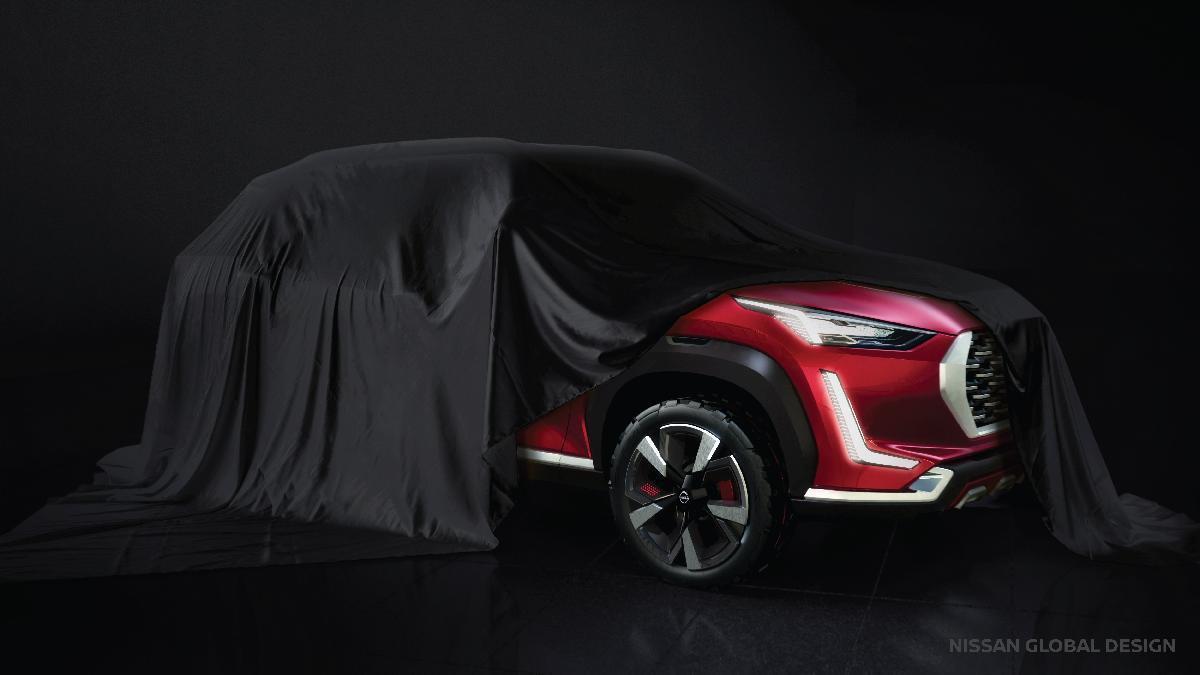 Like Volkswagen, Nissan too has decided to go only with a petrol powerplant, as a result, it will be available in two 1.0-litre options. The standard 1.0-litre will churn out 71bhp and 96Nm of torque and will be available in two transmission options, a 5-speed manual and an AMT. As for the more powerful 1-litre turbo, it will boast around 99bhp, the same as showcased by Renault when it introduced the Triber turbocharged trim at the Auto Expo. Apart from a 5-speed manual gearbox, the Magnite, may also feature a CVT automatic.

This time around, Nissan has taken an aggressive approach with the Magnite. What you will get is a large chrome finish honeycomb front grille and L-shaped DRLs, similar to the ones on the recently launched Datsun Redi-GO. The swept-back Katana blade-like headlamps will add a touch of sportiness to the SUV. The Magnite looks muscular with the skid plates, buffed up bumpers and contrasting black coloured wheel arches. Like its competition, the Nissan SUV will be fully loaded with features, including segment-first 360-degree parking camera. The Magnite is based on the Renault Triber's CMF-A+ modular platform.

The Magnite which is expected to be launched in early 2021, will compete with the Hyundai Venue, Mahindra XUV300 and the upcoming Kia Sonet. It will be priced between INR 5.5-11 Lakh.