Hyundai Alcazar will be the latest entrant to the seven-seater club.

Hyundai Motor India recently showcased its upcoming and much-awaited six and seven-seater premium SUV, the Alcazar. According to S.S. Kim, MD & CEO, Hyundai Motor India Ltd., with the launch of the Alcazar, a vehicle that has been developed based on Indians’ feedback and one which offers state-of-the art modern design, both in terms of interiors and exteriors, “we will create a new demand.” And why not? Afterall, Hyundai Motor India, does know a thing or two about creating demand. They have managed to sell a whopping 100,000 Cretas every year, for the last six years, since its introduction in 2015. Now, if priced right, the Alcazar, which goes up against the Tata Safari, Mahindra’s upcoming 700, and the MG Hector Plus, should also see great demand.

Hyundai engineers say that they have spent a great amount of time conceptualizing and building the Alcazar. In fact, according to them, they have been working on it since 2017, spending over three lakh manhours researching and readying the Alcazar to ensure that it offers not just a fantastic driving experience but also enough comfort to all those who experience it. So, what should you expect?

First things first. The Alcazar, is basically a longer, six and seven-seater version of the current Creta that is being sold, with a 150mm longer wheelbase. How do we know that? We got to spend some time with a few camouflaged Alcazars in Rajasthan which gave us a sneak peek into Hyundai’s latest offering. 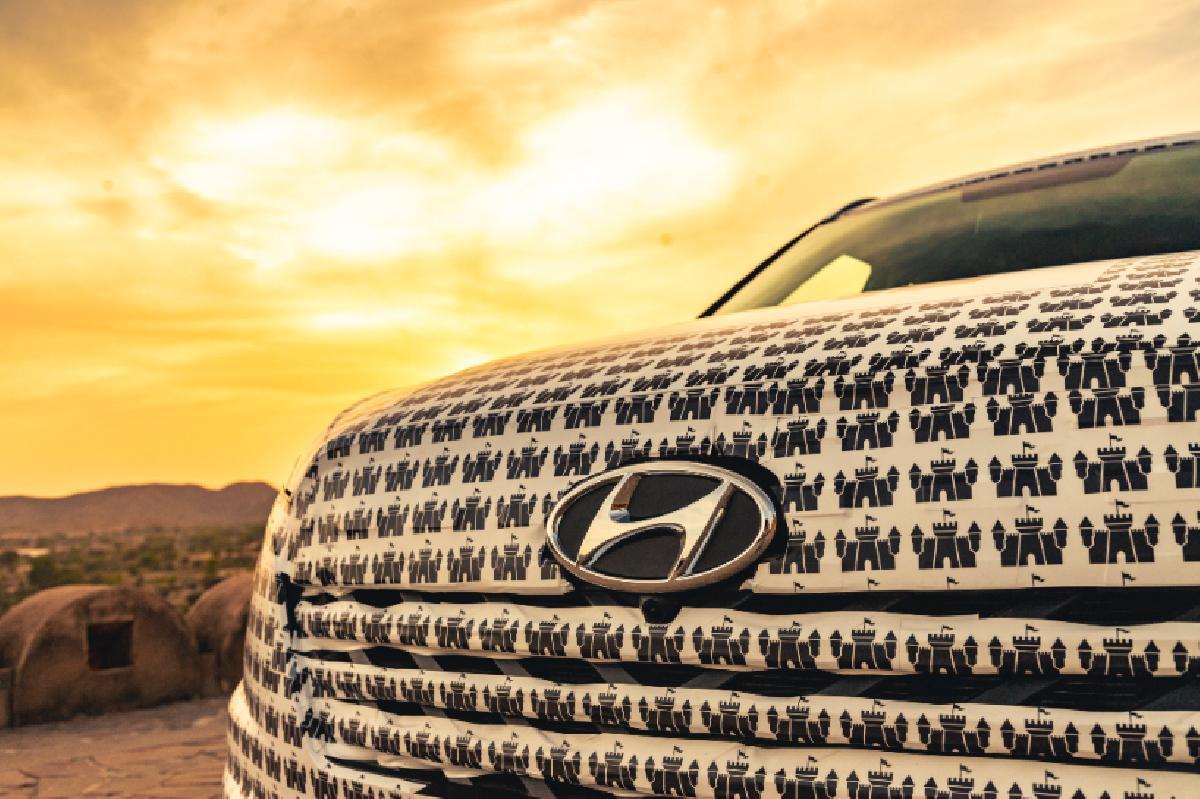 While there is a striking resemblance in terms of the headlights with those found on the Creta, what is new on the Alcazar is the brand-new chrome grille and the larger fog lamp housings. 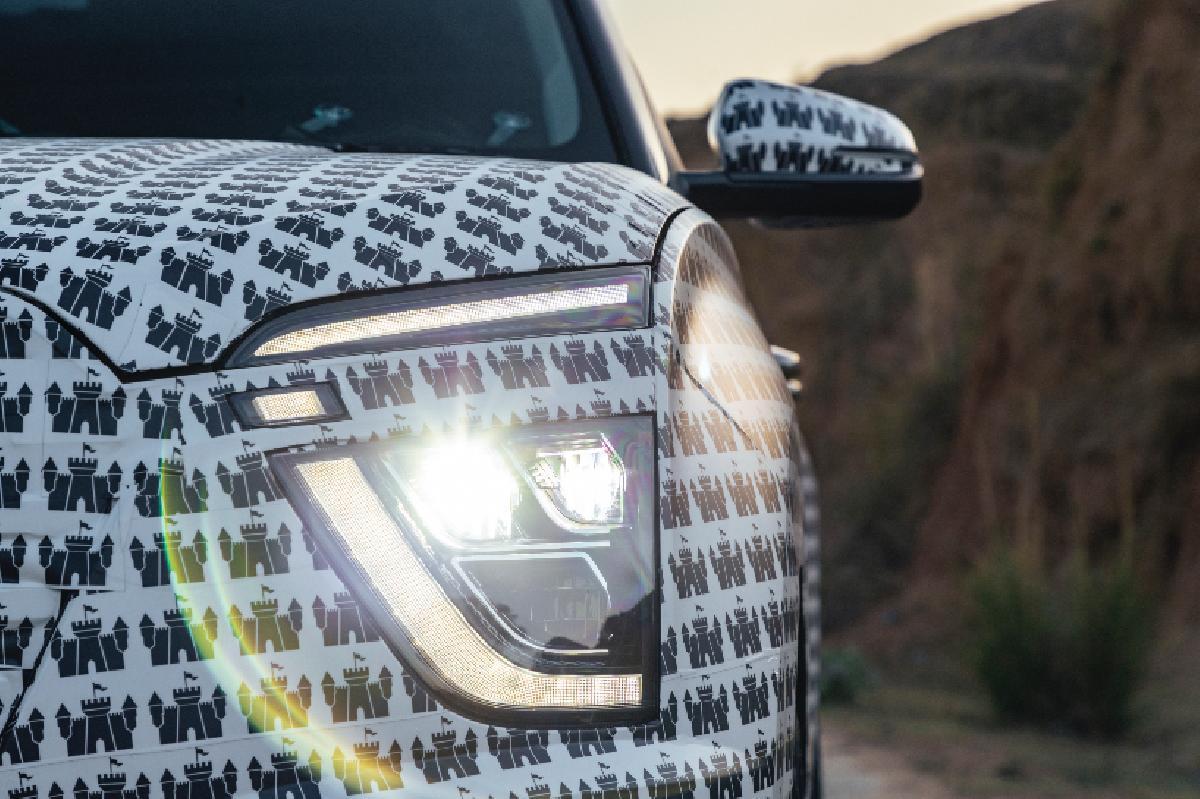 Then there are the larger 18-inch alloys on the longer Alcazar which don’t look disproportionate on the SUV, in fact, they’re quite good looking. Besides, the Alcazar also gets a quarter glass, which makes the cabin feel roomier, so that the third-row occupants don’t feel hemmed in. 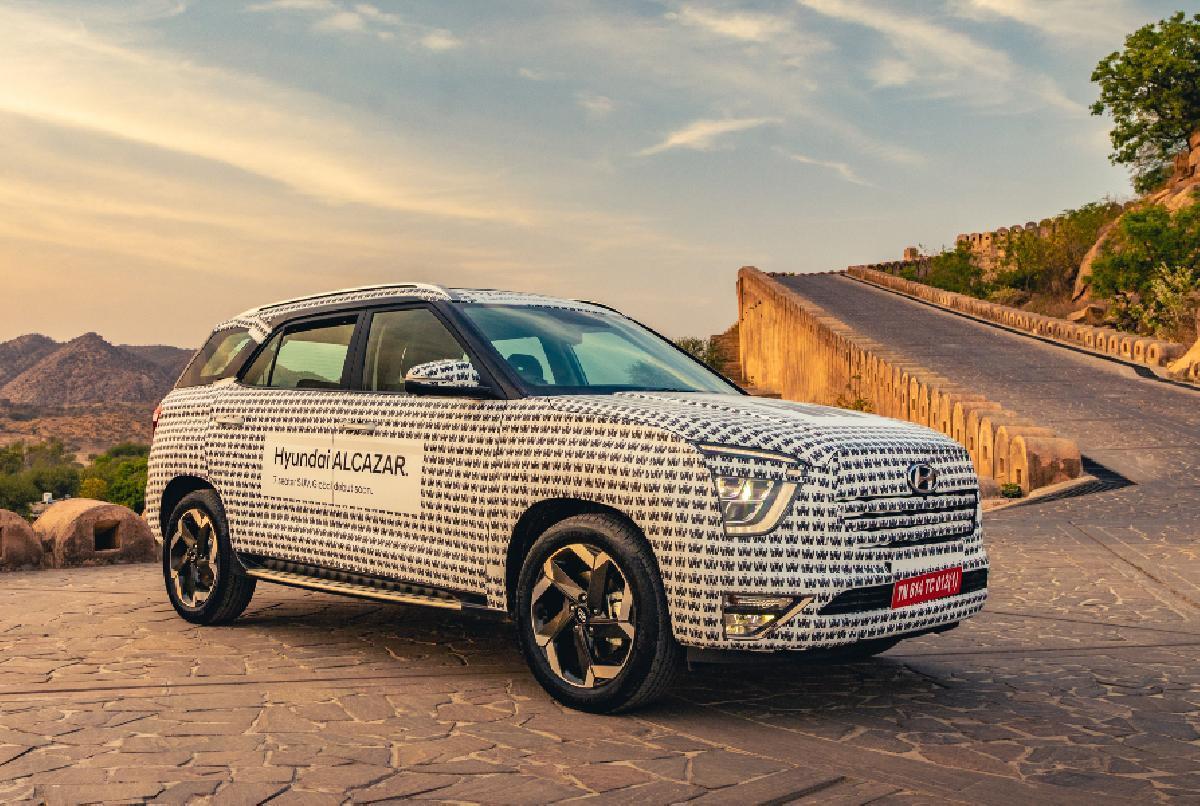 There is also a shark fin antennae and non-working roof rails that sit atop the Alcazar’s roof. 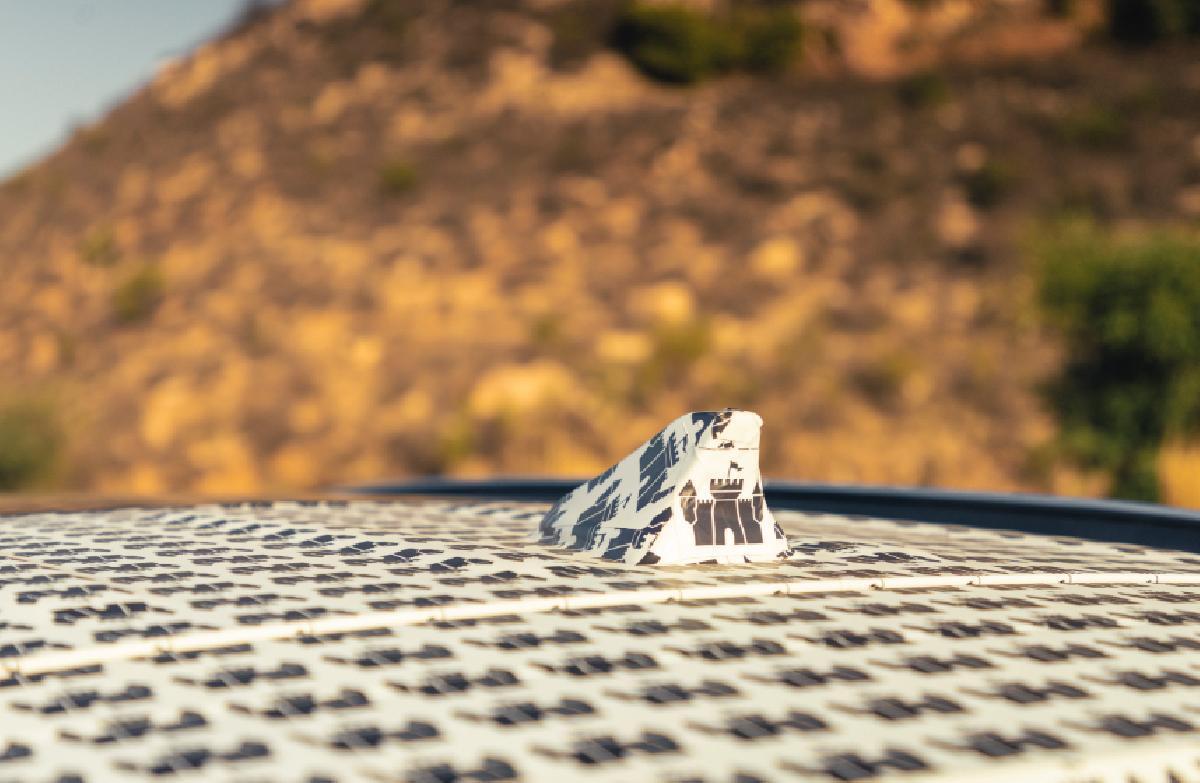 The Alcaraz gets a spare tire that sits below the body and also comes with chrome tipped dual exhausts. 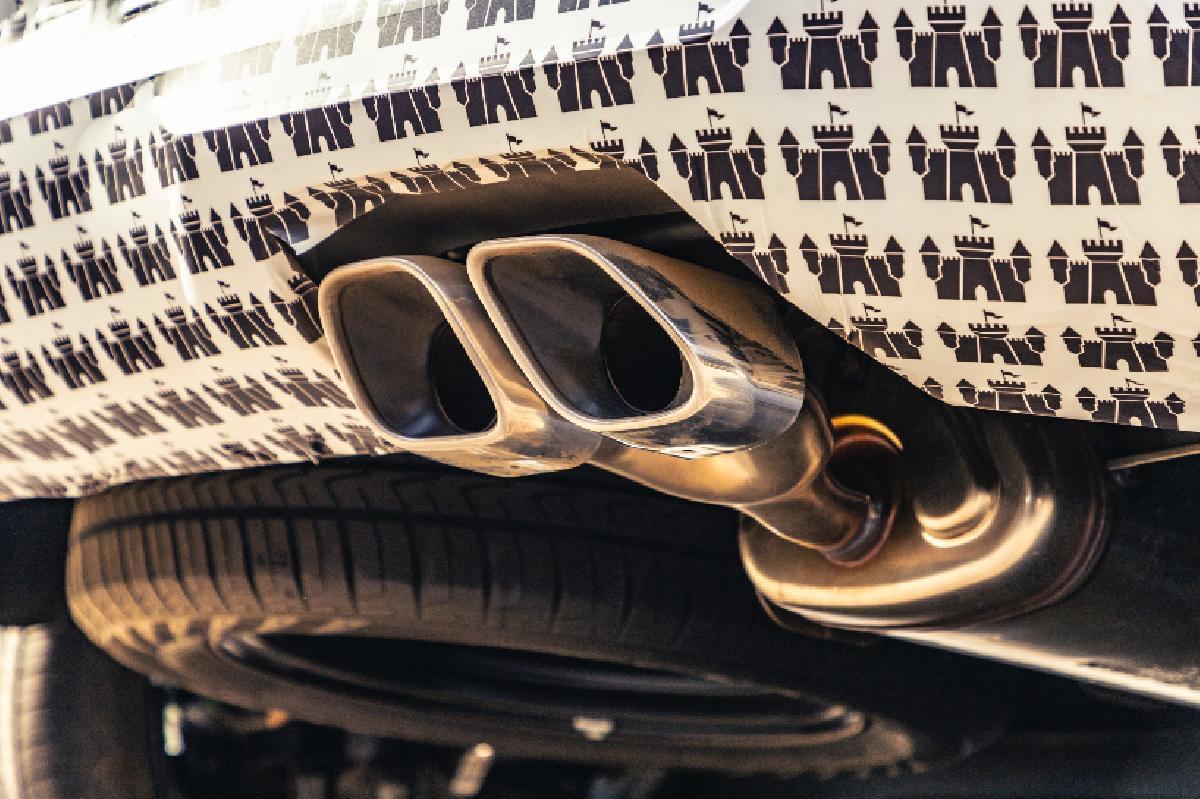 The rear, even through the camouflage, we can tell with certainty, is striking. Thanks, not just to the beautiful LED tail lamps and the words ALCAZAR that are displayed boldly on a thick black band that runs across the tailgate, but because of the crease line that run across the width of the tailgate which adds character to the SUV. And while the bootspace, with all the three rows of seats up doesn’t look like much, we assure you that it actually offers 180-liters of space, which is better than what its rivals, at least the ones out there, offer, so far. 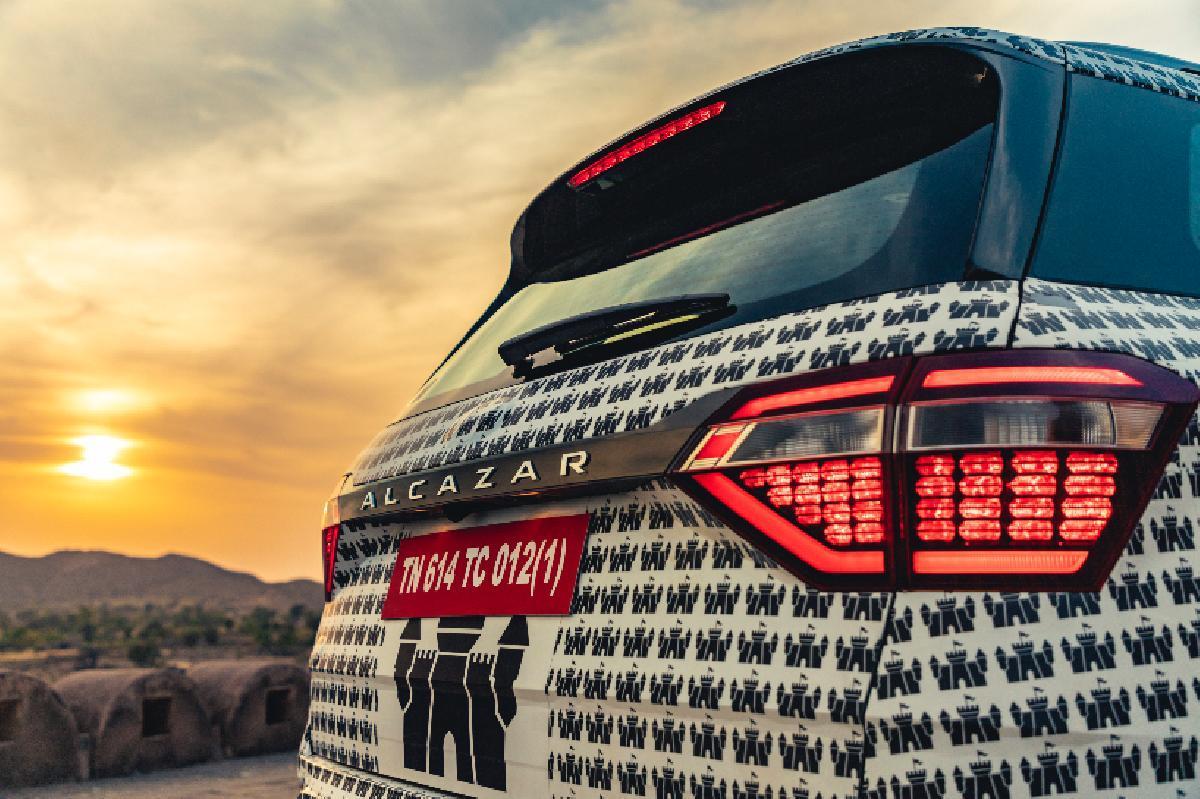 About the inside, we aren’t permitted to reveal much, at this point in time, but we can say this, the colour scheme, is offered in black and brown tones. The dashboard of the Alcazar is a simple one yet a practical one, much like the one offered on the Creta currently but with a few tweaks, for sure. The middle row gets Captain seats or bench seats and what you also get are tray tables so that you can sit and work comfortably from your seat with your mobile devices such as laptops and tablets while enjoying your hot or cold beverages within the comfort of your Alcazar. Besides, there is also smartly designed space for you to set your cell phone in, so that it doesn’t move around when the vehicle is in motion. What the Alcazar also gets is a central console that provides occupants with additional comfort with more cup holders and a space for a wireless phone charger. Lest, we forget, the Alcazar also gets a beautiful panoramic sunroof, which adds to the airy feeling in the SUV. 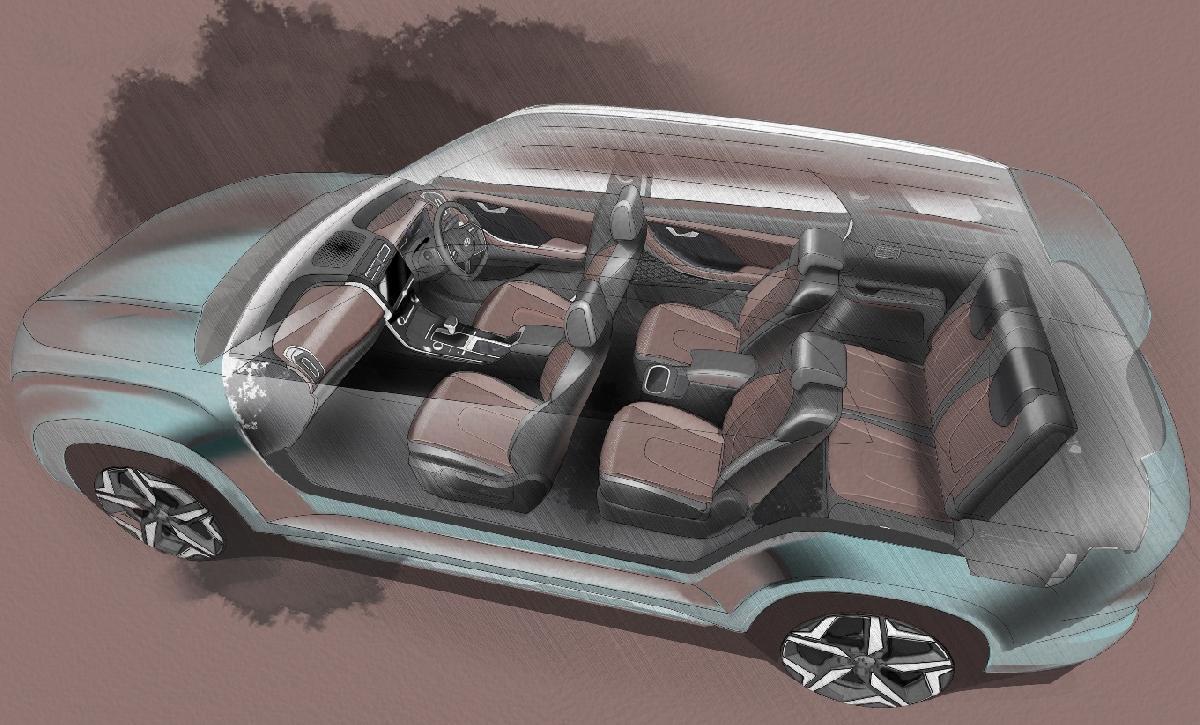 There are some clever bits on the Alcazar that we aren’t allowed to reveal just yet, in fact, its instrument cluster offers a bundle of cool surprises. Expected to be priced around INR 18-20 lakhs, the Alcazar, is already a much-awaited SUV that many will find themselves gravitating towards. 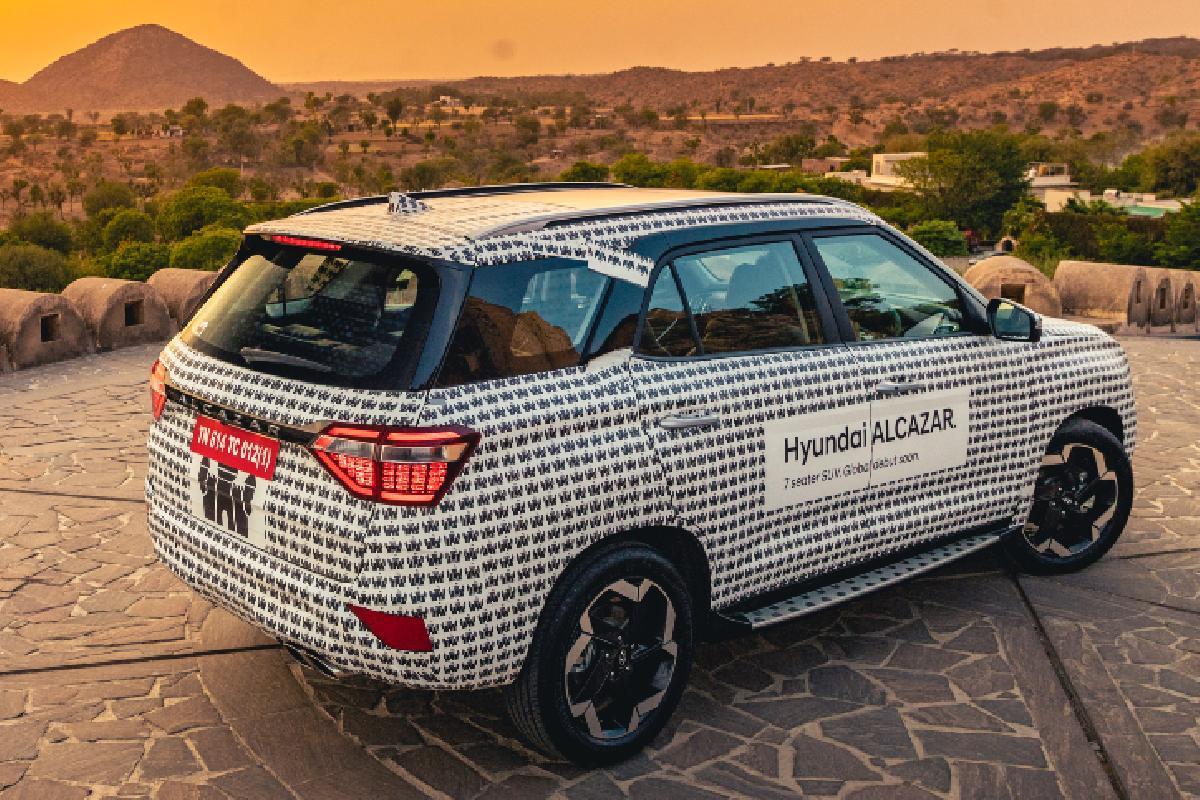 So, until the launch of the Hyundai Alcazar, soon, watch this space for more.