One of the most competitive and crowded segments is about to get new players, the Skoda Kushaq and the VW Taigun. Do these new SUVs have what it takes to lord over the other rivals? We find out.

Skoda is all set to launch its first-ever Made-in-India SUV, the Kushaq. Skoda Auto Volkswagen India is hoping that it will make a serious dent in this highly competitive segment. Like Skoda, Volkswagen, too will soon enter this SUV segment for the first time with their Made-in-India vehicle, the Taigun. This segment consists of many key players and is unique not just in terms of price range as many of these vehicles overlap with others but also because of their size and dimensions. If we go strictly by dimensions, the Kushaq and the Taigun are all set to take on the segment leader, the Hyundai Creta, Kia Seltos, and Nissan Kicks. However, as mentioned earlier, it isn’t as straightforward as it seems. The pricing of the two bigger SUVs — the MG Hector and the Tata Safari have ensured that they gate crash this party too.

The name Kushaq means the king or emperor in Sanskrit.  With localisation levels to 95%, the Kushaq, which is based on the new MQB-A0-IN platform, is the most compact SUV in the segment in terms of dimensions — 4,221mm long, 1,760mm wide, the height of 1,612mm and 385 litres of boot space. It also offers a decent ground clearance of 188mm.

Skoda Kushaq gets a split headlight design like the Creta, the Hector, and the Harrier. The SUV retains the Czech automobile maker’s typical butterfly shaped front grille with vertical slats. The angular all-LED headlamps get elongated L-shaped DRLs. The Kushaq looks very muscular with chunky wheel arches and character lines on the bonnet and the doors.

Based on the variant, the Kushaq offers a 7-inch or 10-inch touchscreen display. The top trim comes with features like a Wi-Fi hotspot, an external microphone for hands-free phone calls, Skoda Play and MySkoda apps for wireless functions, a wireless phone charger and a 6-speaker sound system with an additional amplifier and subwoofer.

The Kushaq will be available in three trims — Active, Ambition and Style. The entry-level comes with 16-inch steel wheels, while both Ambition and Style sport 16-inch alloy wheels and 17-inch dual-tone alloys respectively.

As the Volkswagen Group has taken a decision to offer only petrol engines in India, the Kushaq, will be available with two turbo-petrol motors — 114bhp 1-litre TSI mated to either 6-speed manual gearbox or a 6-speed torque converter automatic transmission and 1.5-litre TSI with 147bhp of power output and is configured with a 6-speed gearbox and 7-speed dual-clutch automatic.

The Kushaq is expected to be priced in the region of INR 10-18 lakhs, ex-showroom India. 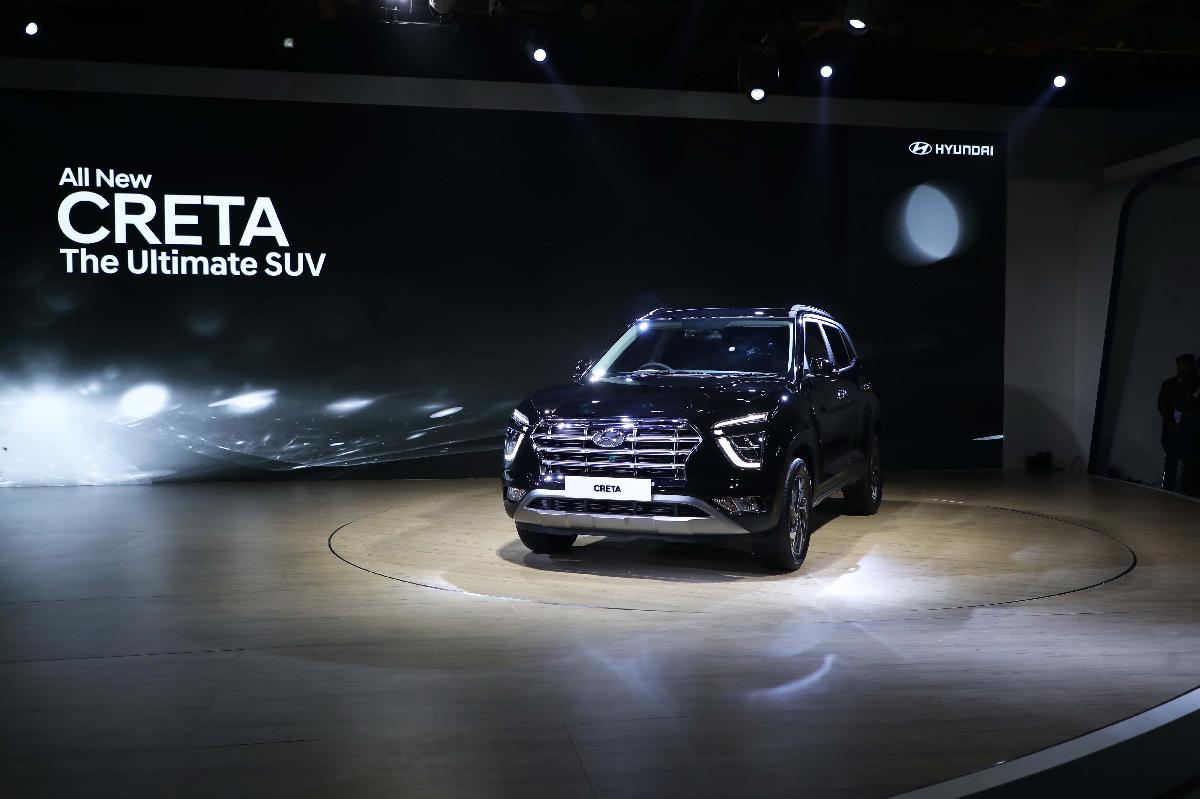 The Creta is the only 4 metre plus SUV that has been one of the top 10 selling vehicles in the country ever since its debut in 2020. Taller, longer, and wider than the Kushaq, its wheelbase is 39mm shorter at 2,610mm. It is also one of the most hi-tech SUVs in the segment.

Hyundai offers an array of engine options in both petrol and diesel. Starting from the former, the Creta gets a 113bhp 1.5-litre natural combustion engine mated to a 6-speed manual and CVT automatic while a 1.4-litre turbo is configured to a 7-speed dual-clutch automatic with an output of 138bhp. For diesel fans, the Creta, is also powered by a 1.5-litre 113bhp motor which is available with a 6-speed manual or a 6-speed automatic torque converter. All three automatic trims come with additional features like three drive modes — Eco, Comfort, Sport, paddle shifters (a first in the segment), tyre pressure monitoring system, three traction control modes — Snow, Sand and Mud.

The Seltos is based on the same platform as the Creta and is marginally taller, wider and longer than its Hyundai cousin though both have identical 433 litres of boot space. The Seltos has been a runaway success and has regularly been on the best-selling cars list, till the new Creta came along and swept the market off its feet.

The Seltos comes with the same three powertrains as the Creta, but the 1.4-litre turbo petrol is available in both 6-speed manual and 7-speed DCT automatic. The automatic variants come with three drive modes and three traction control modes.

When it comes to features, the Seltos, is right up there with the Creta with some additional goodies like front parking sensors, head-up display, 360-degree camera, blind view monitor and multi-colour in-cabin ambient lights. The Seltos also comes with connected tech, the UVO that offers over 37 smart features including voice commands, remote control function and vehicle management data. 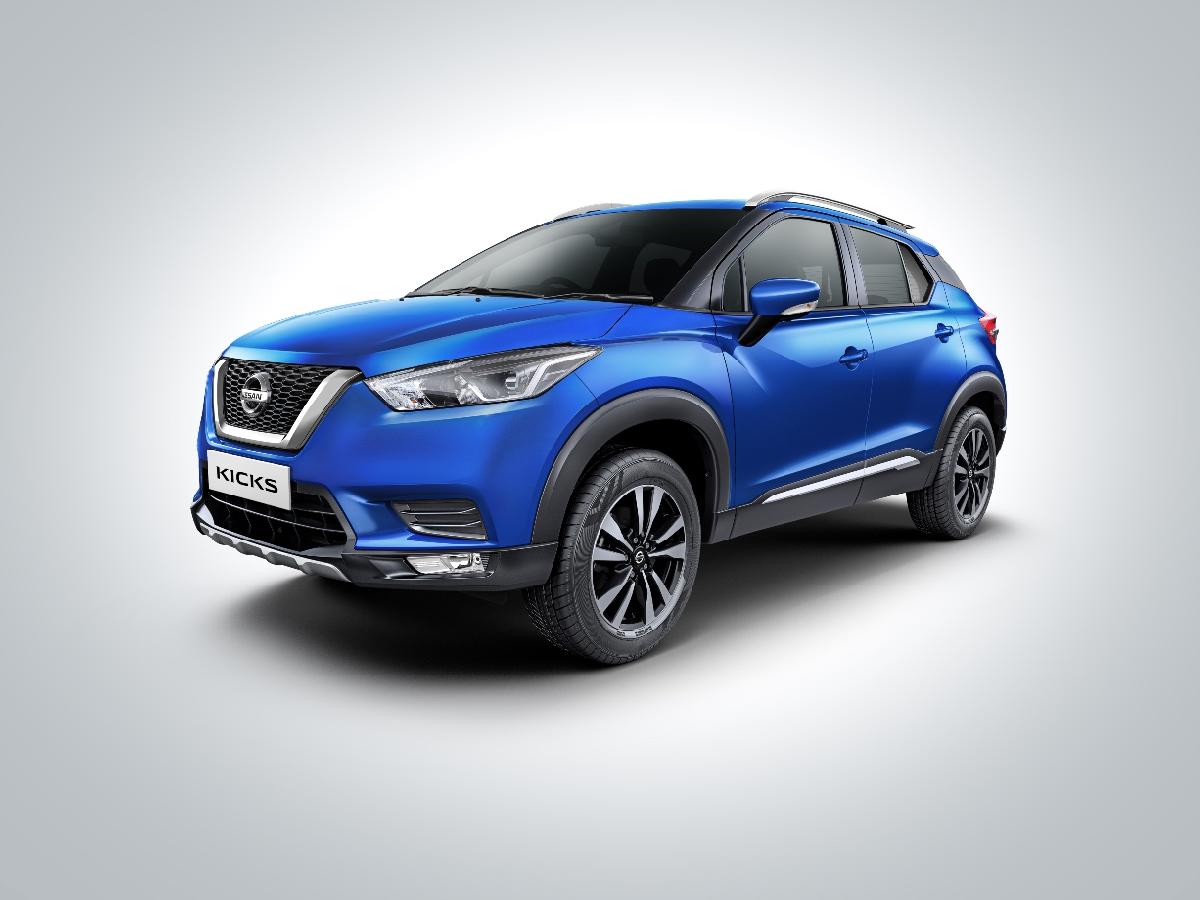 The Kicks offers a spacious cabin, has a class-leading 210mm of ground clearance, and 400 litres of boot space. According to Nissan, the Kicks also has the best-in-class least turning radius of 5.2 metres.

The Nissan SUV boasts of a rich premium cabin with all leather dual-tone dashboard (a first in the segment), steering wheel, diamond stitched leather upholstery and leather finished rear armrest with cupholders. It retains an 8-inch floating infotainment system with voice command features along with Apple CarPlay and Android Auto and a 360-degree camera. Another first in this segment is that one can remotely start the engine from the key fob. Like its competition, the Kicks, is also equipped with car connectivity services, NissanConnect, which offers over 50 features like service history, geofencing, speed and chauffer alerts and much more. 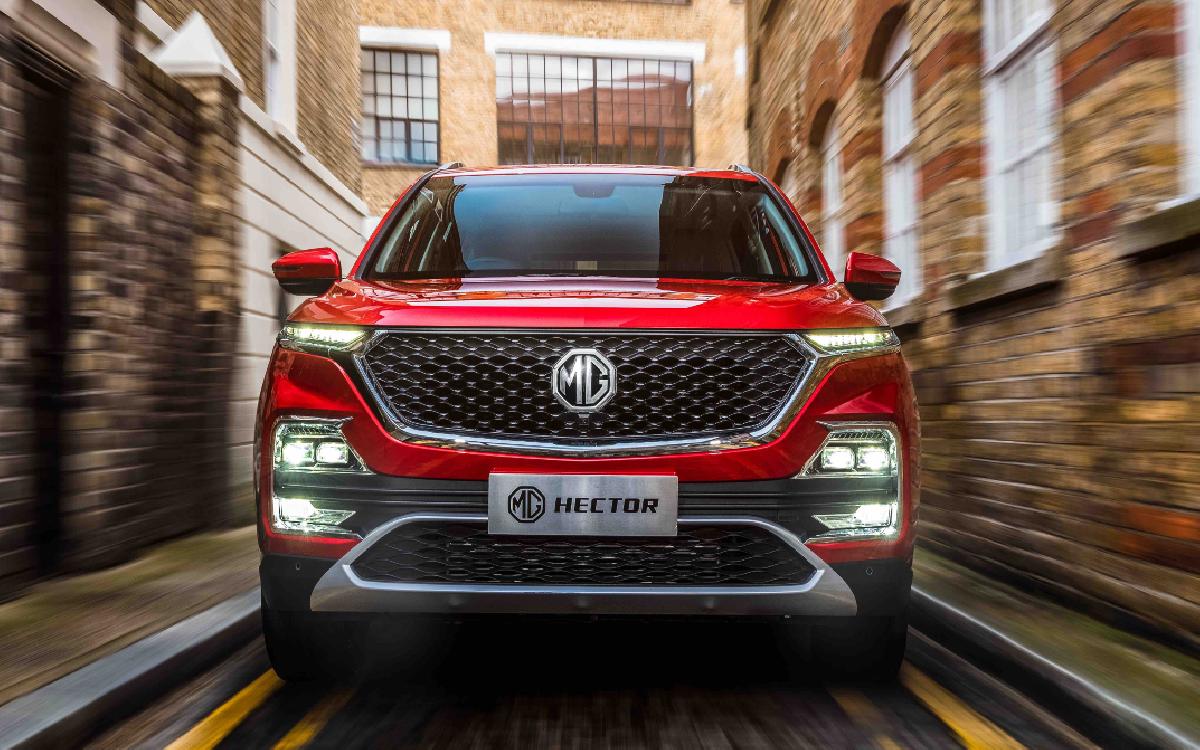 The Hector was the first smart SUV in this segment and managed to take the market by storm. Not only is it a fully-loaded vehicle, but it is also the longest in terms of dimensions at 4.6 metres and has the longest wheelbase of 2,750mm. It also boasts of having the most spacious boot with 587 litres capacity.

The Hector is one of the first SUVs to sport the split headlight design, which has now become a norm. It also gets a unique vertical shaped 10.4-inch touch screen, the biggest in the segment. It is the first vehicle in its class to come with embedded SIM, over-the-air software updates, remote control functions via an app, over 100 voice commands, 360-degree camera, front parking sensors, all-LED headlights and fog lamps, a powered tailgate and much more.

The Hector is available in three engine options — 1.5-litre turbocharged petrol, 1.5-litre turbo petrol hybrid and 2-litre diesel from Fiat Chrysler Automobiles (FCA). The former two have identical 141bhp output, but the hybrid is mated to a 6-speed manual while the petrol comes with both manual and 6-speed DCT automatic transmissions. The diesel, on the other hand, churns out 168bhp with 350Nm and is configured to 6-speed manual gearbox. The MG Hector starts from INR 13.18 lakhs and goes all the way to INR 19.06 lakhs, ex-showroom Delhi. 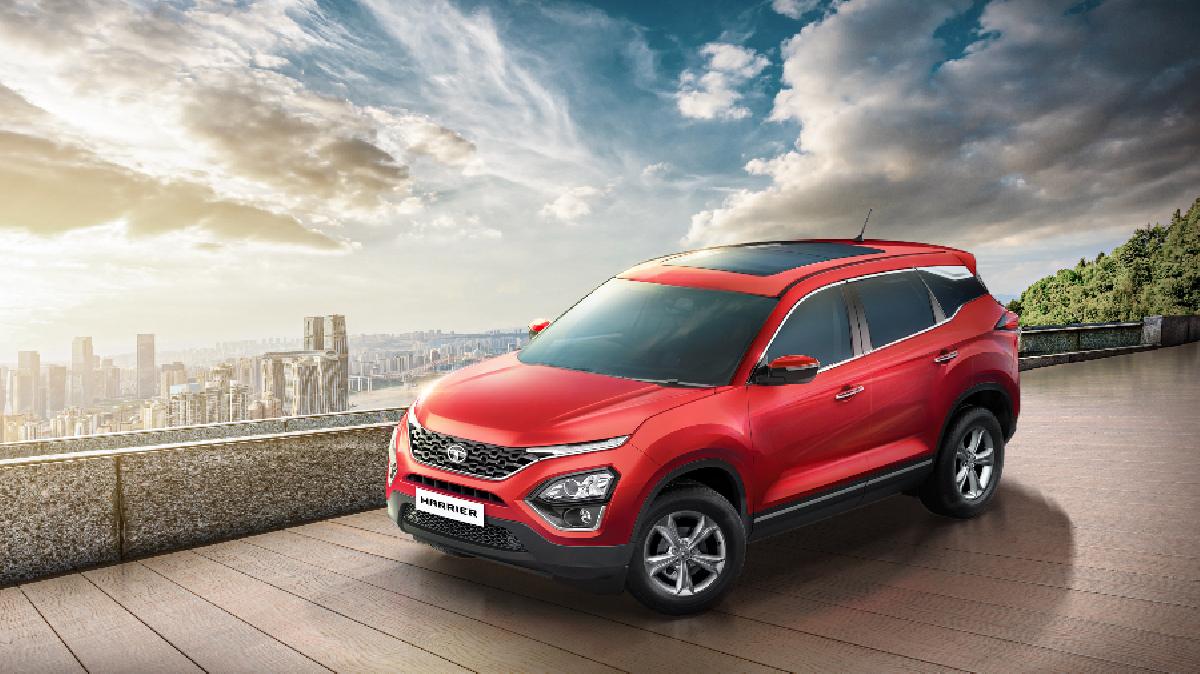 The Harrier is a capable and spacious SUV with an imposing road presence. Built like a tank, the Harrier comes with the 168bhp 2-litre diesel powertrain sourced from FCA, like the Hector. Even though both the MG and the Tata SUVs have identical power outputs, the Harrier is available in two transmissions — a 6-speed manual and a 6-speed torque converter automatic sourced from Hyundai. The Harrier comes with three drive modes — Eco, City and Sport and Terrain Response Modes — Normal, Rough and Wet.

The 2020 Harrier received numerous upgrades apart from the much-needed extra ponies and an automatic transmission. For starters, the outside mirrors are resized to avoid any blind spot. The cabin has a panoramic roof with a rain sensor and for easier accessibility, the USB port in the front has been repositioned. Other additional goodies on the 2020 version consist of a 6-way electric adjustment for the driver’s seat and an auto-dimming for the inside mirror. It retains the 8.8-inch infotainment system, which comes with a nine-speaker JBL system, a 360-degree camera, powered tailgate etc. The Harrier is expected to soon get Tata’s connected tech, iRA (Intelligent Real-time Assist).

The Harrier is the most expensive SUV in the segment. The Harrier starts from INR 14.30 lakhs to INR 20.82 lakhs, ex-showroom Delhi. 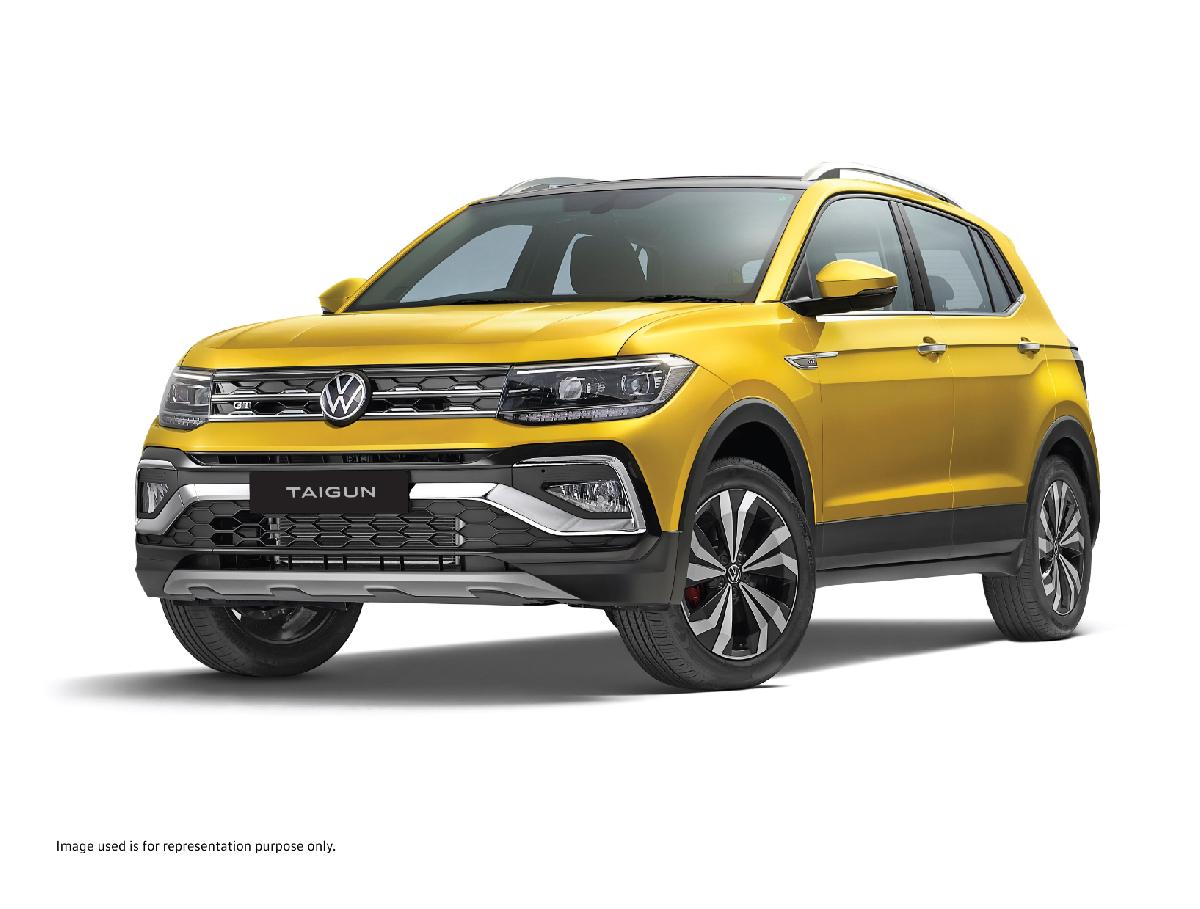 Based on the same MQB-A0-IN platform as the Kushaq, Volkswagen’s Taigun, too will have 95% of localization content and going by the Skoda SUV’s dimensions, it will be the most compact SUV in its class.

The Taigun retains the typical Volkswagen DNA with a solid and clean design. It sports chrome horizontal slats running across the front nose with a clear LED headlight and DRLs. The front bumper looks bold and gets a silver-grey finish. Its rear styling is very contemporary and makes quite a statement with C-shaped LED rear lamps which run across the boot.

Volkswagen has tried to make the cabin different from the Kushaq with more traditionally designed side AC vents, the 10-inch touchscreen's integrated into the dashboard, a three-spoke steering wheel and the biggest distinction is that it gets an all-digital instrument cluster.

The VW Taigun is expected to be priced from INR 10 lakhs to INR 18 lakhs, ex-showroom India.