Here are the fast and furious coupes that money can buy you in India.

If you’re an HNI with good taste and are in the market for a new set of wheels, your car shopping, this festive season, just got simpler. This time around, ditch the usual and go after something that has been more aesthetically crafted. With exquisitely sloping rooflines and adrenalin pumping performance on offer, sedan coupes, though exorbitantly priced, are worth every bit of fun that they offer. Here’s what you should be checking out… 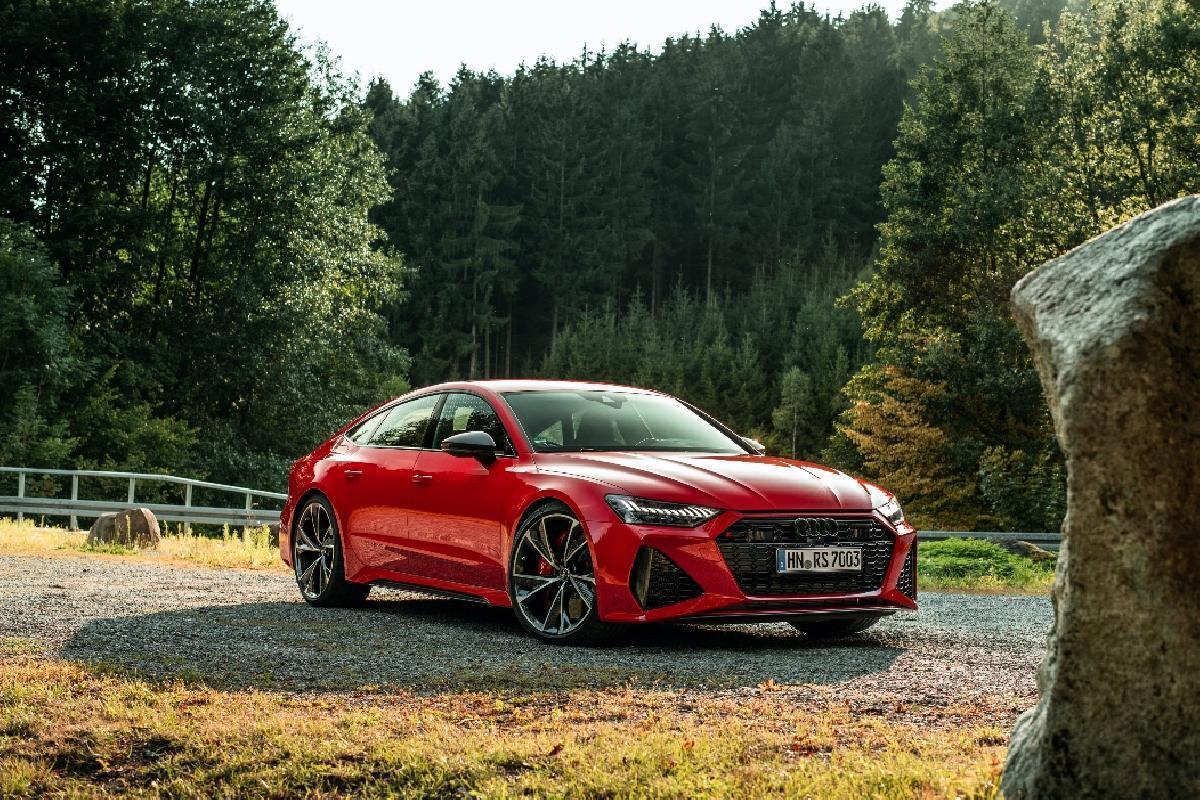 Launched at INR 1.94 Crores, ex-showroom India, it is almost impossible to criticize the RS7’s design from any angle. The all-black stretched front grille with massive air ducts along with the low stance gives the coupe a rhapsodic flair. As expected from a coupe the sloping roofline along with 21-inch alloy wheels beautifully balances the brawns with beauty. If that isn’t eye-catching enough, the RS7 also gets LED tail lights that span out across the boot, not to mention the twin oval-shaped exhausts. The cabin gets an all-black treatment with an aluminum brushed finish. The centre console is dominated by two touchscreens. The three-spoke flat-bottom steering wheel gets aluminum finish paddle shifters with a virtual cockpit. It comes standard with black Alcantara leather upholstery.

There’s more to good looks than meets the eye as the RS7 gets a 4-litre V8 twin-turbo mild-hybrid engine under the bonnet, which pumps out 591bhp with 800Nm of torque. This all-wheel-drive Audi can do 0-100kmph in 3.6 seconds. The standard RS7’s top speed is 250kmph, but if you go for the Dynamic Package and Dynamic Plus trims then the top speed goes up further to 280kmph and 305kmph respectively. The V8 motor is mated to an eight-speed automatic transmission. 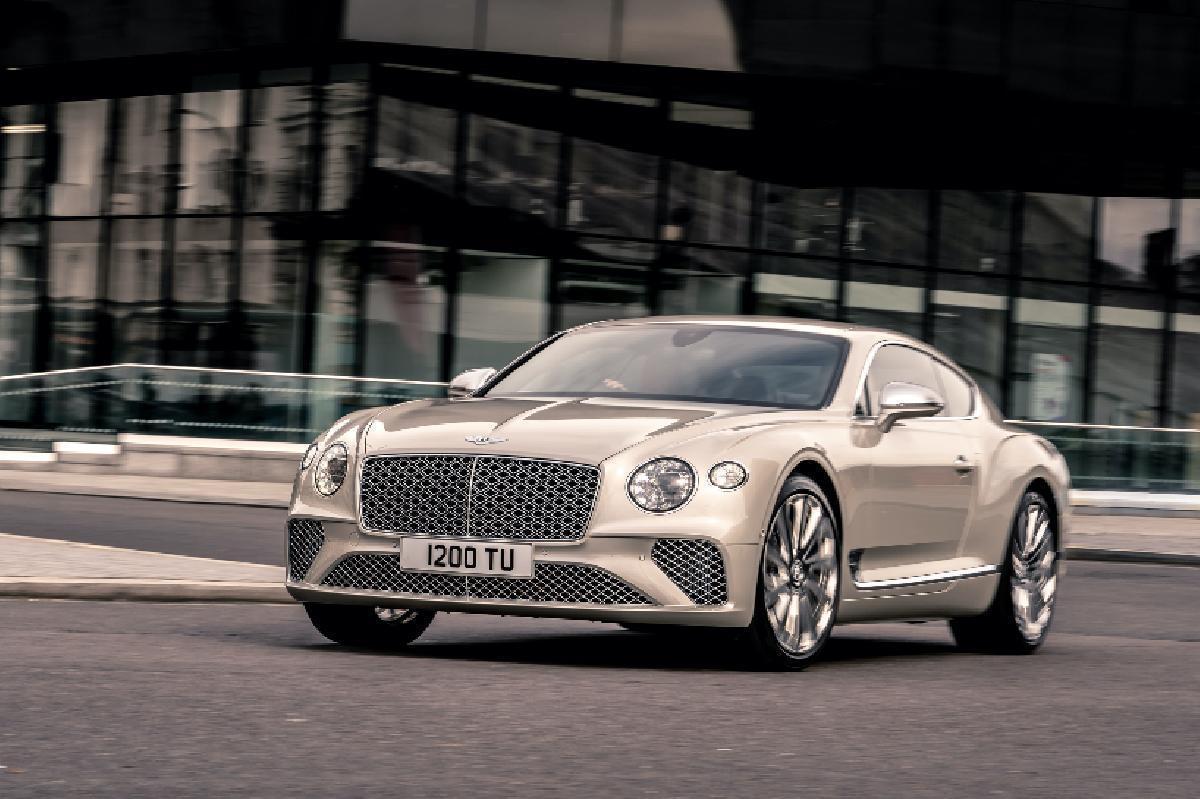 What happens when a tuxedo wants to shed its ultra-formal image? We suspect it will look something like the suave Continental GT. It’s one of the first outlandish yet opulent coupes in the market and even Bruce Wayne would appreciate it. The GT is available in two engine options, the 542bhp 4-litre V8 and 626bhp 6-litre W12. Both are equipped with an eight-speed dual-clutch gearbox. The W12 does 0-100kmph in 3.7 seconds and has a top speed of 333kmph while the V8’s maximum speed is 318kmph and goes from standstill to 100kmph in 4 seconds.

The GT looks quite striking with a long muscular bonnet and fenders along with a big flat front nose which can be all black or chrome. There are also a wide range of alloy wheels from 20 to 22-inches in size. This two-door coupe gets a massive 12.3-inch infotainment system with Apple CarPlay, but in terms of the materials in the cabin, the sky is the limit as you can literally choose any colour, design pattern, wood or metal finish not to mention leather upholstery. This master crafted coupe starts from INR 3.30 Crores. 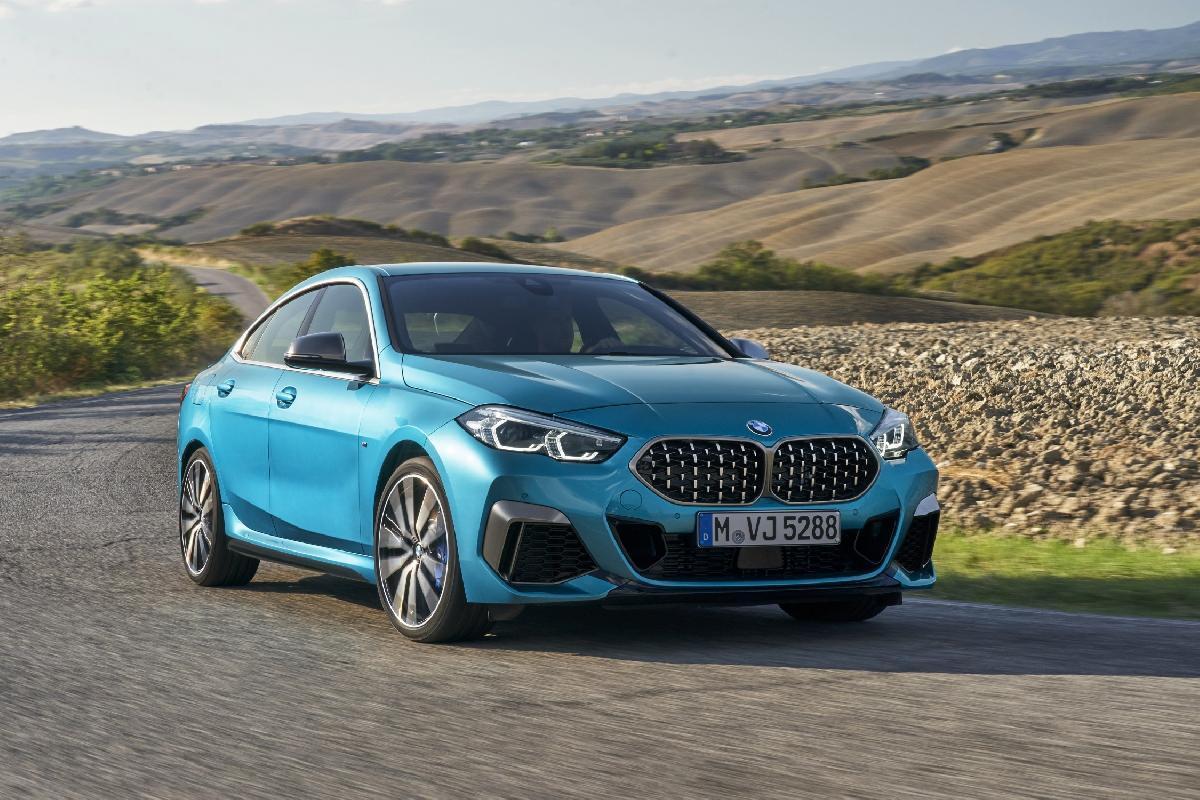 The 2 Series is the most compact sedan in BMW’s portfolio, but in no way does it compromise on style and power. This is where the 2 Series Gran Coupe and the M2 Competition come in. The recently launched Gran Coupe is available in two variants, the Sport Line at INR 39.30 Lakhs and M Sport at INR 41.40 Lakhs, ex-showroom India. It only comes with a 187bhp 2-litre diesel motor with 400Nm. It’s mated to an eight-speed automatic gearbox and does 0-100kmph in 7.5 seconds with a top speed of 233kmph. The cabin comes with an option of either dual-tone interiors or an all-black one. It sports a 10.25-inch infotainment system and a 12.3-inch digital instrument cluster. The four-door coupe boasts of both wireless phone charger a wireless Apple CarPlay. The M Sport variant is equipped with some additional goodies such as 18-inch alloy wheels instead of the 17-inch ones, the M Sport steering wheel, and sporty aluminium pedals. 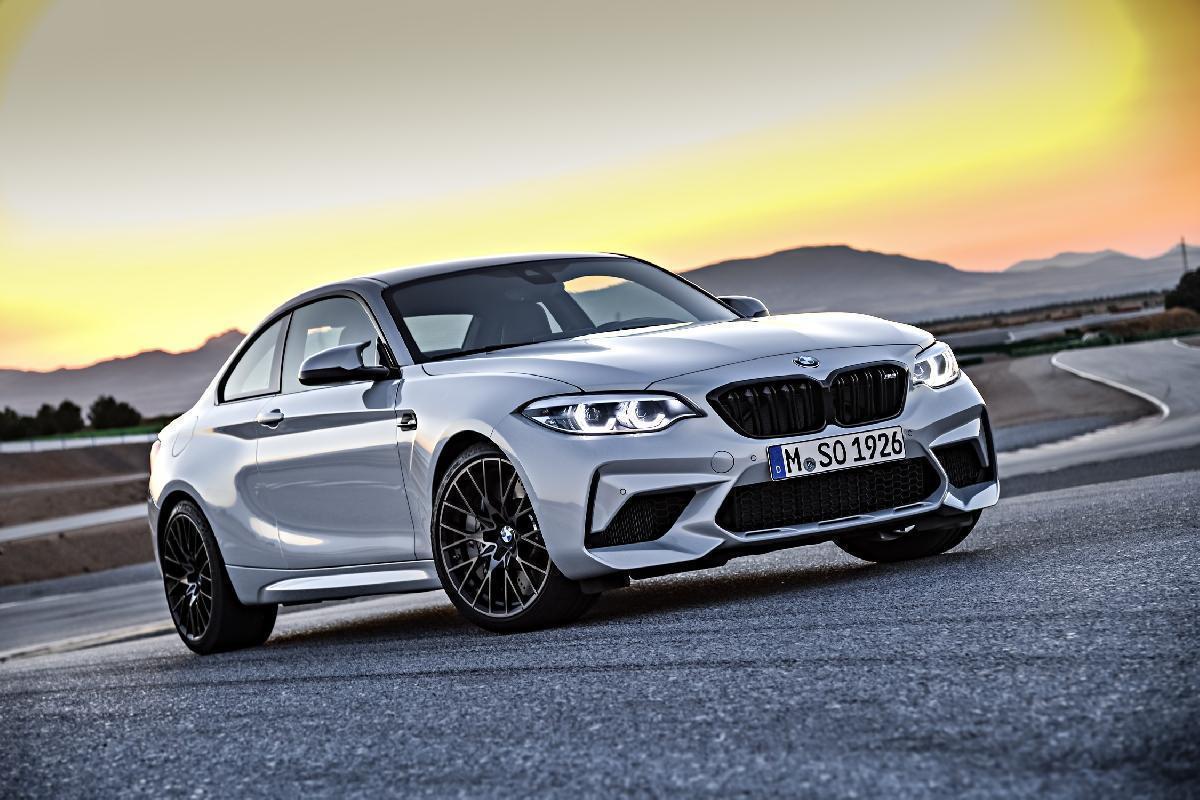 The two-door M2 is a true-blue power-packed coupe which gets a 404bhp 3-litre turbo-petrol engine with 550Nm of torque. This rear-wheel-drive coupe comes with a seven-speed dual-clutch automatic transmission. According to BMW, it does 0-100kmph in 4.2 seconds and its top speed is 250kmph. It offers three drive modes – Comfort, Sport and Sport+. The M2 comes standard with an active differential for the rear axle. Offering a no holds bar performance, the M2 is priced at roughly INR 84 Lakhs. 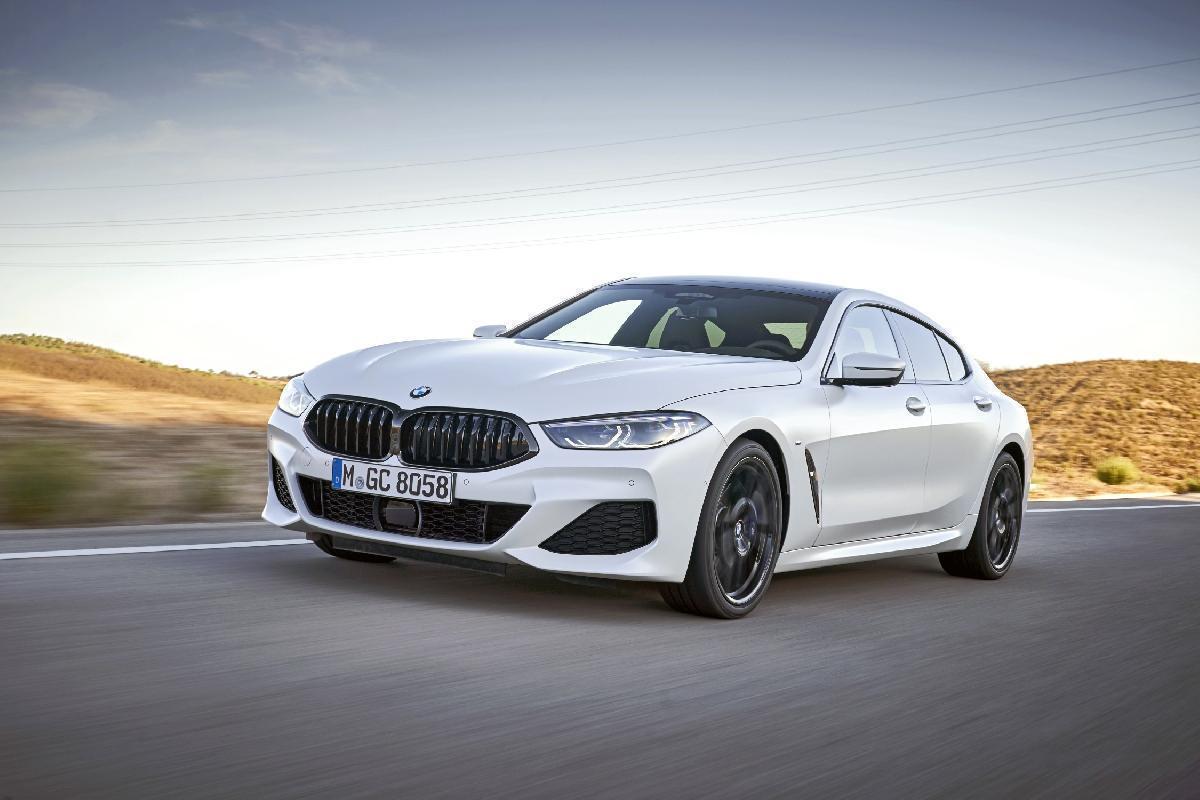 The 8 Series Gran Coupe is the flagship coupe of BMW. It’s compelling silhouette, frameless windows and sleek LED headlights all lend the stylish coupe with 440 litres of boot space, an air of opulence. It’s has a 3-litre, 6-cylinder turbo petrol engine under the hood that generates an output of 335bhp and 500Nm of torque. It manages to accelerate from 0-100kmph in 5.2 seconds. The 8 Series Gran Coupe comes with a single-engine option in India, but it's available in two variants — standard at INR 1.30 Crores and M Sport at INR 1.55 Crores, ex-showroom India. 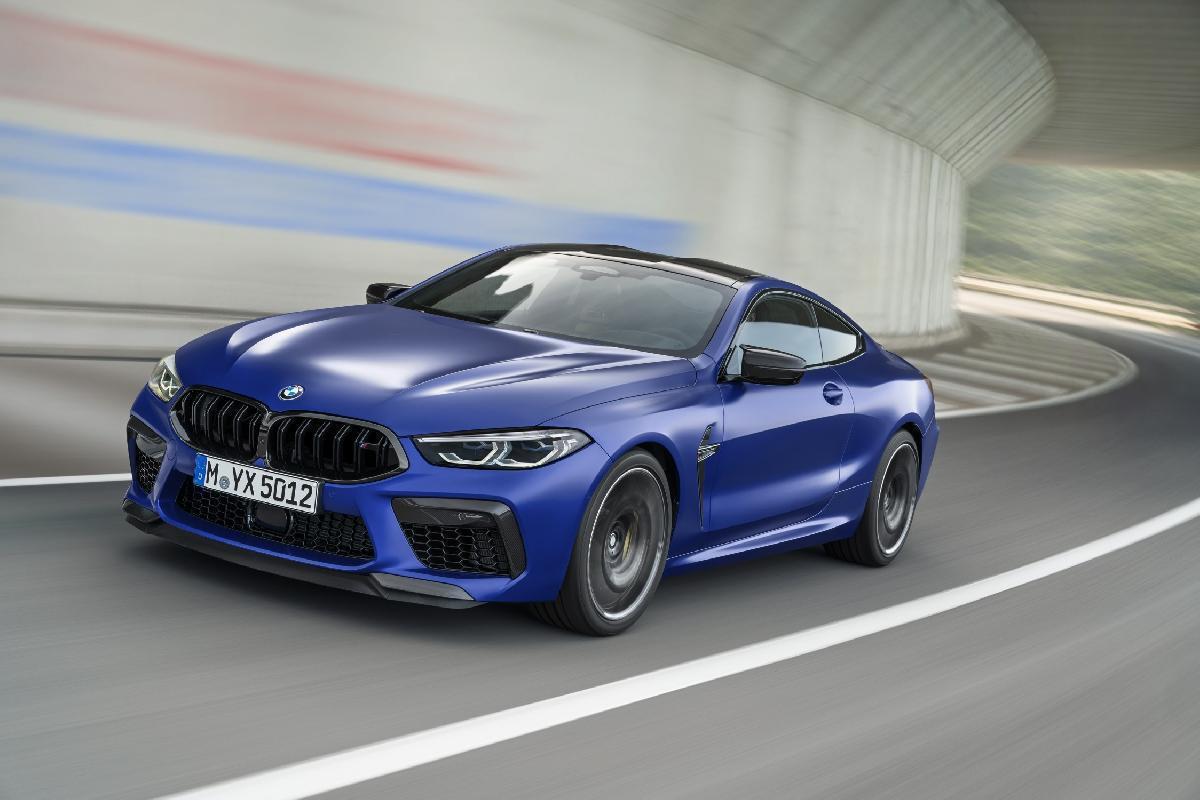 The M8 Coupe, on the other hand, is all about taking the performance to the next level. This two-door coupe is powered by a fire breathing 593bhp 4.4-litre twin-turbo V8 engine with 750Nm of torque and it sprints from 0-100kmph in mere 3.3 seconds. The powertrain is mated to an eight-speed automatic and comes standard with all-wheel-drive that offers different modes like 2WD, 4WD and 4WD Sport. It also gets Adaptive M Suspension which has three different damper settings – Comfort, Sport and Sport Plus. The M8 Coupe is priced at INR 2.15 crores, ex-showroom India. 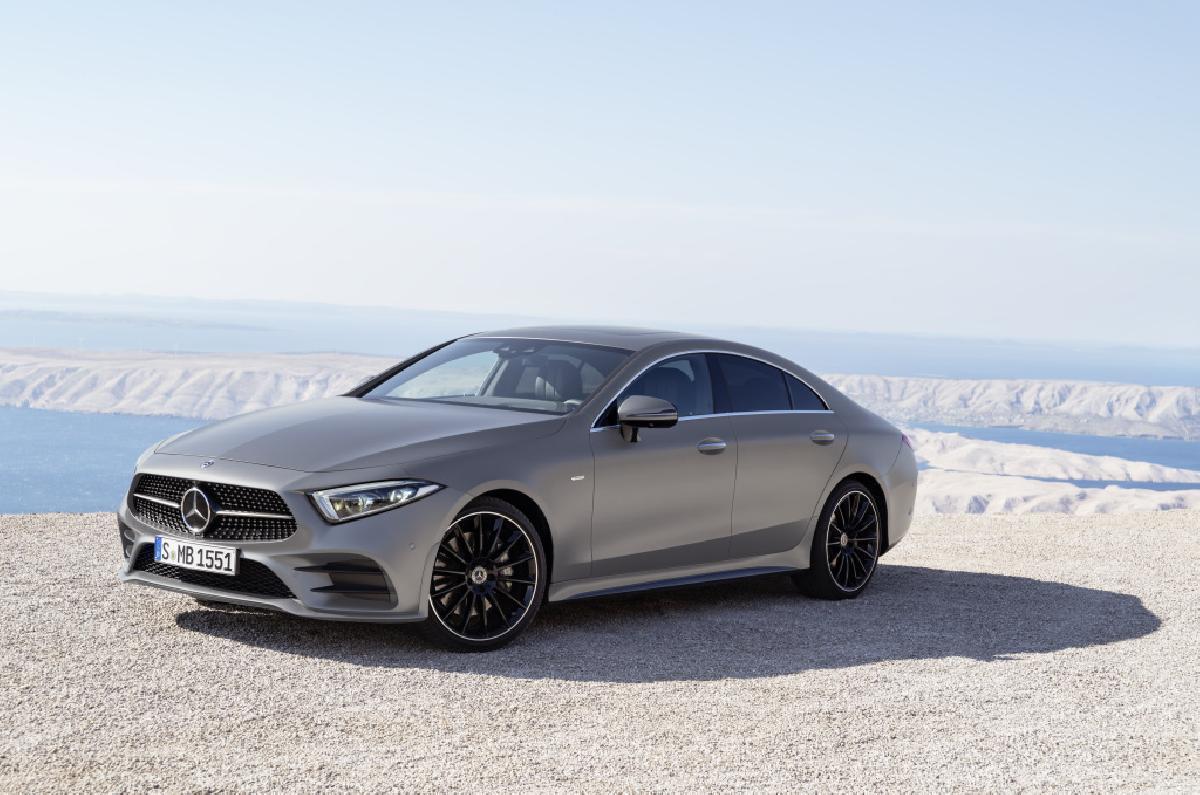 The CLS starts at INR 86.39 Lakhs and is slotted between the E-Class and S-Class. Based on the former sedan, the four-door coupe makes quite a sweeping statement with a clean uncluttered design like the first-generation CLS, a sloping hood, triangular headlamps and the stretched coupe rear pillar. The cabin is identical to the E-Class and it gets 12.3-inch infotainment touchscreen along with another 12.3-inch instrument cluster. The CLS gets the typical three-spoke Nappa leather-wrapped steering wheel and it houses touch control buttons. The CLS boasts of top-of-line 590 watts 13 speakers Burmester music system with a 9-channel amplifier. To soothe the cabin lights according to your mood, Mercedes-Benz offers 64 ambient lighting colours. The CLS is only available with a 1,950cc 4-cylinder diesel engine with an output of 241bhp with 500Nm of torque. It accelerates from standstill to 100kmph in 6.4 seconds and has a top speed of 250kmph. 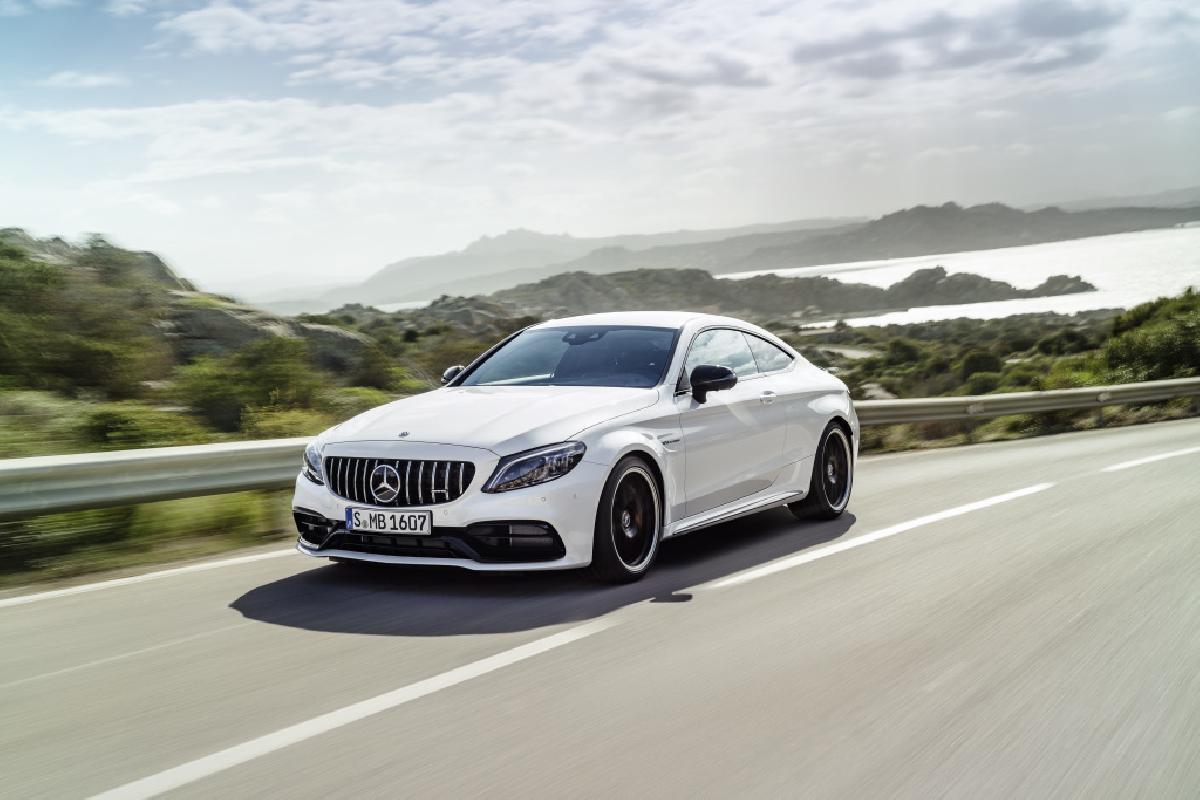 The C 63 Coupe gets a massive 4-litre V8 engine that pumps out an incredible 638bhp of raw power and 650Nm of torque. It can do 0-100kmph in 4 seconds and is mated to a nine-speed automatic gearbox. It has an aggressive-looking 12 vertical slats front grille with an all-black bumper housing air duct. The C 63 like the C 43 comes with three pods LED headlights, sports a panoramic roof and signs off the rear with a spoiler. The C 63 offers six different drive modes — slippery, comfort, sport, sport+, race and individual, which not only change the engine response and suspension set up, but it also changes the exhaust’s sound. Starting from INR 1.33 Crore, ex-showroom India, it offers the best money can buy. The cabin sports 12.3-inch all-digital instrument cluster that offers three display styles — Classic, Progressive and Sporty. It also houses a floating 10.25-inch multimedia unit which comes with Android Auto and Apple CarPlay connectivity along with third-party apps like Spotify. 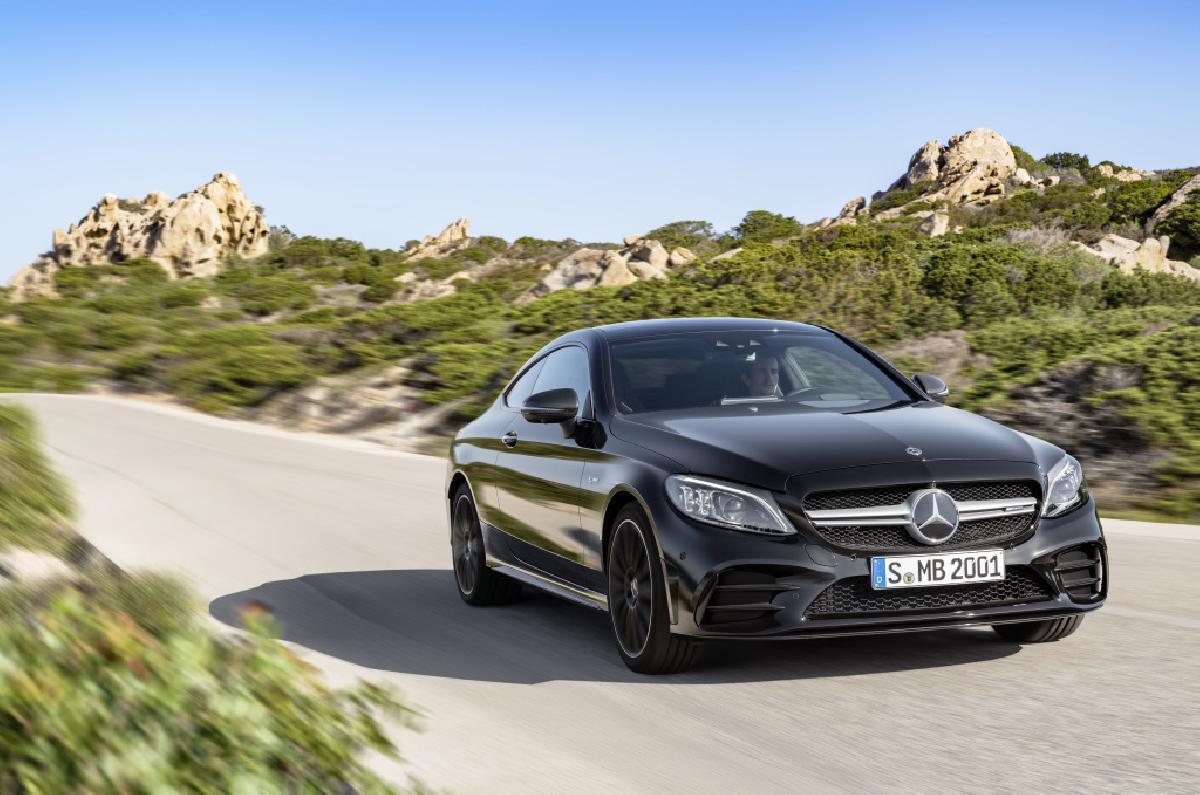 The C 43, on the other hand, is priced at INR 76.50 Lakhs, ex-showroom India, and is powered by a 385 bhp 3-litre V6 engine. This four-wheel-drive two-seater coupe, like its AMG siblings, has a lower stance than the standard sedan and sports a more traditional two horizontal bars running across the front nose with the three-pointed star in the middle. The interiors are more or less the same as the C 63, but instead of a carbon fibre centre console, the C 43 gets a wooden finish. 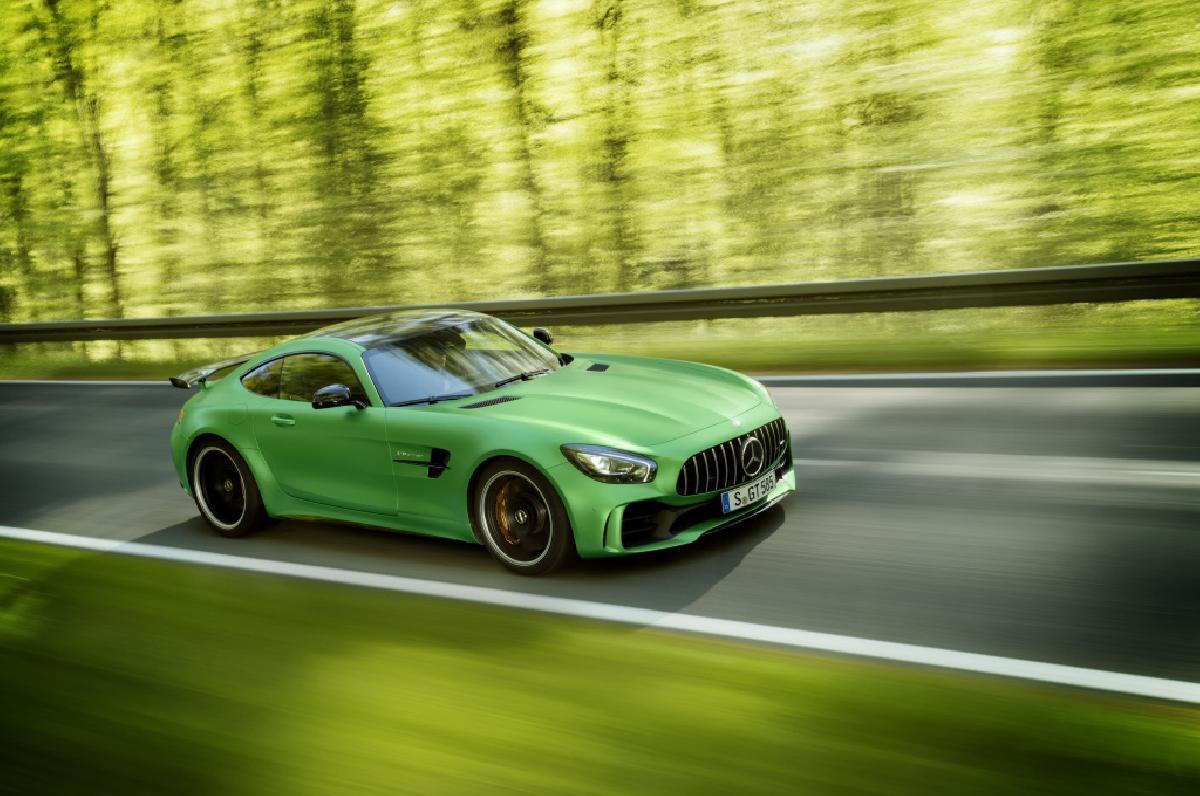 The two-seater AMG GT R is powered by the colossal a 4-litre twin-turbo V8, it churns out an incredible 577bhp at 6,250rpm and 700Nm of torque at 2,100-5,500rpm. This rear-wheel-drive beast is mated to a seven-speed dual-clutch transmission and sprints from 0-100kmph in 3.6 seconds and has an insane top speed of 316kmph. The GT R is a car like no other Mercedes-Benz or AMG as it gets carbon-fibre roof to reduce weight, massive air curtains in the front bumper and active panels in the front bumper for better aerodynamics. It’s such a performance-oriented car that even the engine cover is made of carbon fibre. In terms of cabin equipment and features, it offers everything that’s available in the AMG portfolio, but Mercedes offers a couple of unique packages to help you customise the GT R like two exterior trims of carbon-fibre and one for the cabin, AMG performance seats and then, of course, the AMG Track Package for both exteriors and interiors. The GT R is priced at INR 2.48 Crores onwards, ex-showroom India. 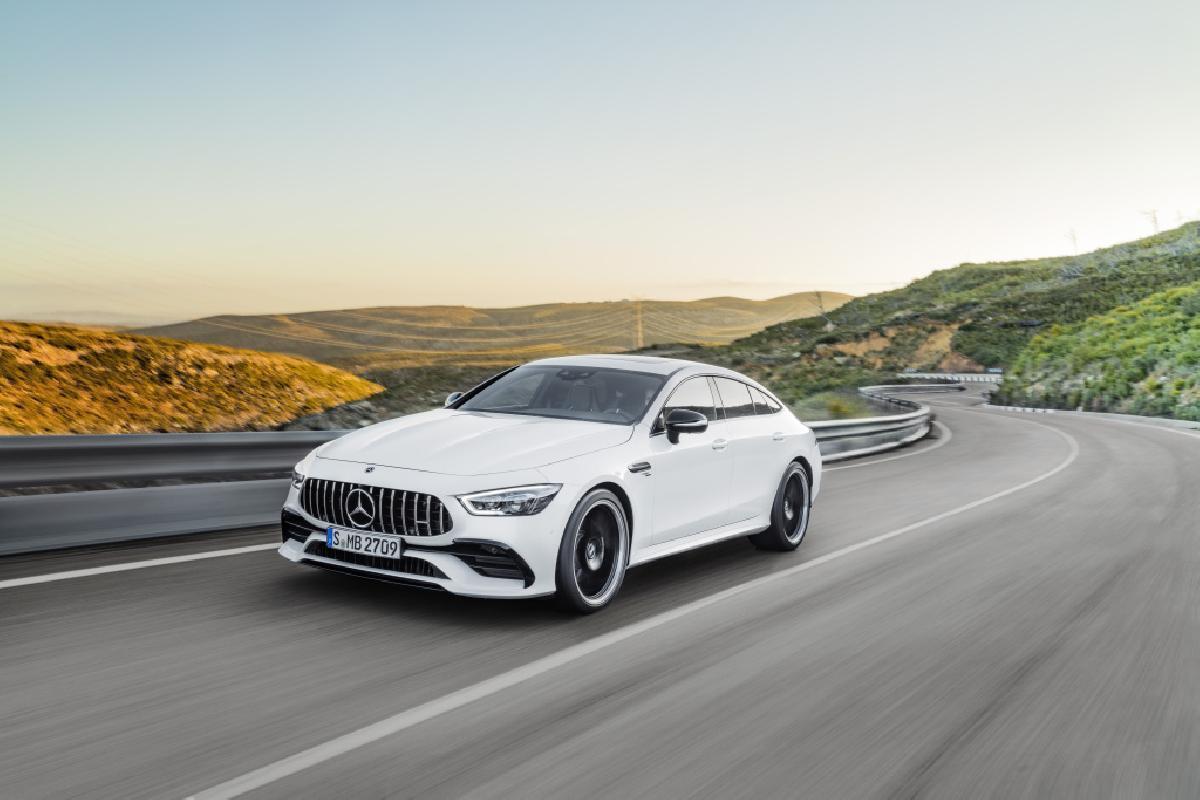 The 63 S GT is the more practical version as it’s a four-door coupe though in terms of performance, but it’s one of the most powerful production cars to be launched by Mercedes in India. It gets the same a 4-litre twin-turbo V8, but it has an output of 630bhp and a peak torque of 900Nm at 2,500-4,500rpm. This all-wheel-drive coupe does 0-100kmph in just 3.2 seconds and is mated to a nine-speed automatic transmission.  Apart from all goodies that the GT R offers, the 63 S GT is also equipped with two 12.3-inch displays for the digital instrument cluster and infotainment system. The 63 S GT’s price starts from INR 2.42 Crores.

Are you a cruiser fan or a sports bike fan?