With Honda and Triumph joining the naked mid-weight motorcycle segment, does Kawasaki still have what it takes to rule the roost? We take a close look at the CB650R, Trident 660 and the Z650.

Of late, the middle-weight street bike segment, has seen some action, with Honda first launching the CB650R and later Triumph joining the party with the Trident 660. Traditionally, this roadster class has been ruled by the Kawasaki Z650, but now it seems its crown is under serious threat from its traditional Japanese rival and the English challenger.

Interestingly, Kawasaki, only until a few months back, was the only two-wheeler manufacturer to offer an array of middle-weight motorcycle options including a sports bike, cruiser and adventure bike, but Honda, is on course to change that with a slew of new bikes. However, today we will focus on the street bikes to see what these three motorcycles have to offer. 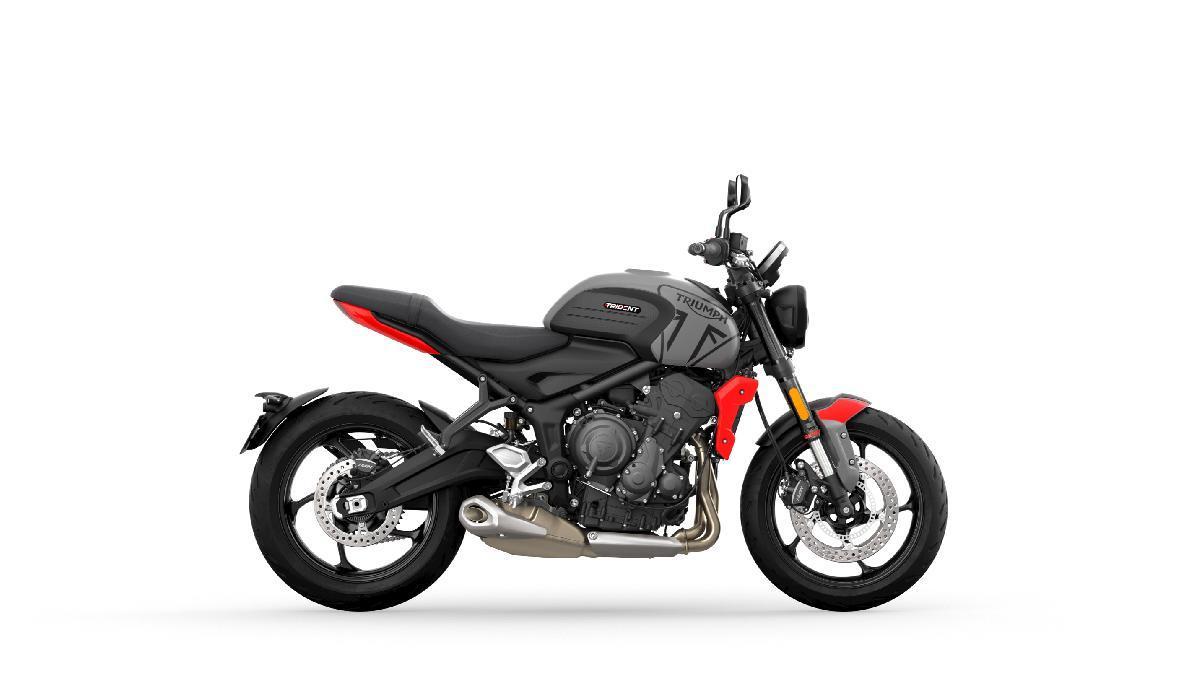 The Trident has managed to balance Triumph’s retro Bonneville DNA and modern roadster styling as it borrows parts from the Street and Speed Triple family. The new streetfighter gets a simple yet eloquent 7-inch full-LED headlight. As a matter of fact, the entire lighting system uses LED lights including the tail lamps, which is integrated under the seat and the indicators, which get auto cancelling feature. Like most naked bikes, the Trident sports an underslung exhaust, body-coloured radiator cowls and body-coloured fork protectors, aluminium handlebars and teardrop shape mirrors.

With a combined weight of 189kgs, the Trident is the lightest among the three bikes. It is based on all-new tubular steel chassis with a steel swingarm. Its seat height is at an accessible-height of 805mm. It comes equipped with Showa 41mm upside down separate function forks in the front and a pre-load adjustable rear mono-shock. The Trident gets twin 310mm discs with Nissin calipers and a single 255mm disc at the rear with dual-channel ABS. The Triumph bike also gets five-spoke 17-inch alloy wheels with Michelin Road 5 tyres. Following in the footsteps of the Street and the Speed Triple, the Trident offers a comfortable yet sporty riding stance.

The Trident uses a 660cc liquid-cooled, 12 valves, DOHC engine. It is the only 3-cylinder motor in its segment and churns out 80bhp@10,250rpm and 64Nm of torque@6,250rpm. It is mated to a 6-speed gearbox and as an accessory option one can even opt for a shift assist up-&-down quickshifter.

Triumph has left no stone unturned and the Trident comes fully loaded with a long list of electronics. It boasts of ride-by-wire technology along with two riding modes — Road & Rain. The new bike comes standard with switchable traction control, which can also be disengaged. It gets an all-digital colour TFT screen. With My Triumph Connectivity System accessory Bluetooth module, it offers additional features such as turn-by-turn navigation, GoPro control and phone and music control. 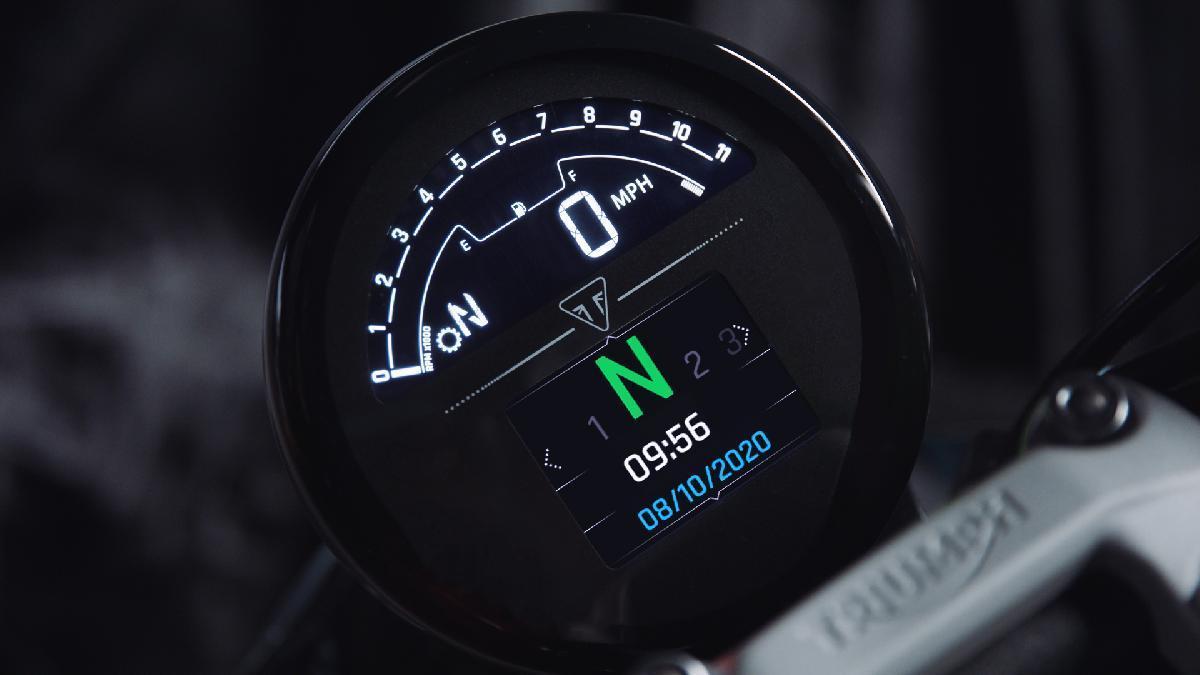 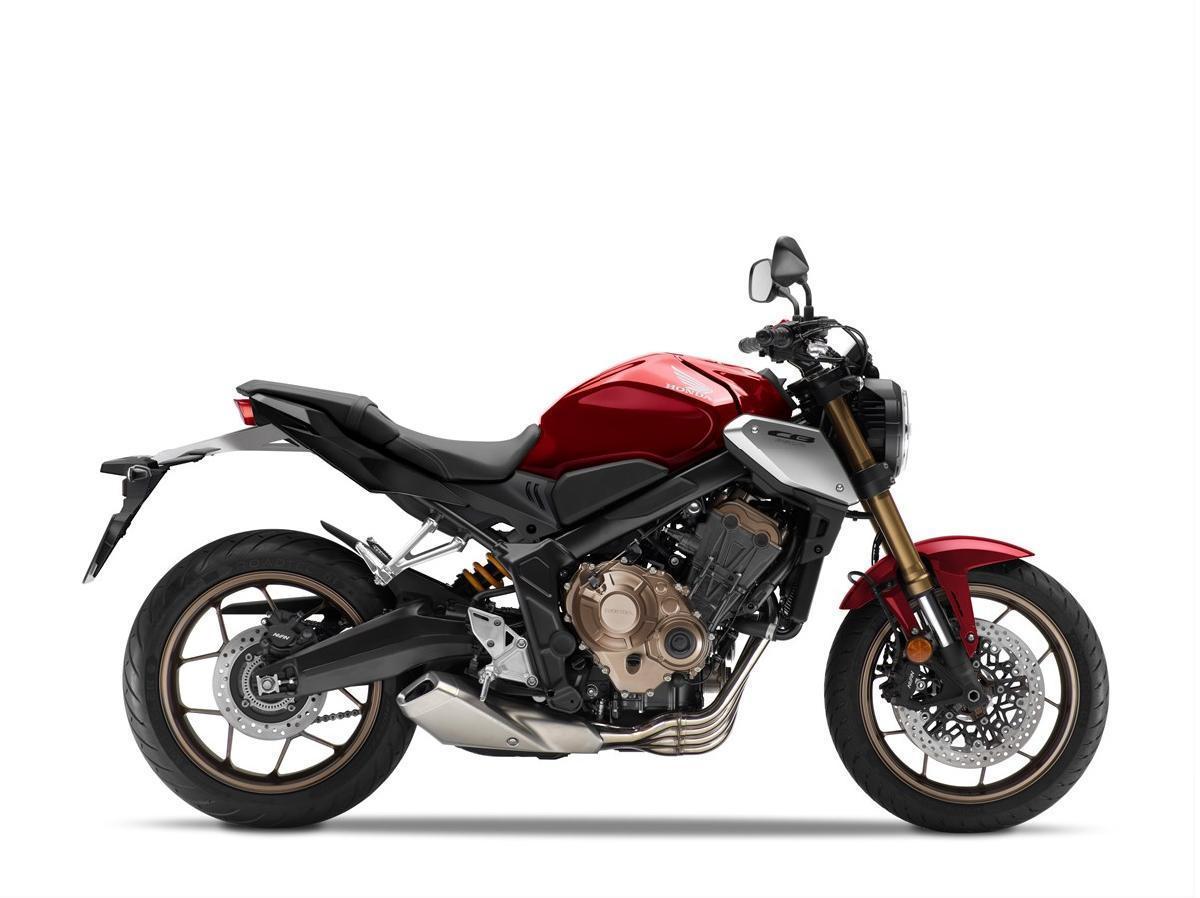 Honda calls the design of their naked bikes Neo-Sports Café styling and the CB650R is the company’s first stripped down bike. Like the Trident, the Honda street bike, also combines retro and modern styling and the lights are all LED starting from the circular headlight with a thick DRL circle to the simple and minimalistic semi-circular tail light. The design of the CB650R is compact with short overhangs. The tank, on the other hand, is sleek and long and gets extensions in contrasting colour, which doubles up as dual air intake ducts. The CB also comes with an underslung exhaust that has four pipes sweeping out from the front of the engine.

The CB650R is based on a steel chassis with an aluminium swingarm. With a kerb weight of 206kg, the CB is the heaviest among the three bikes. It also sports 17-inch 5-spoke Y-shaped alloy wheels. It gets a non-adjustable 41mm Showa Separate Function Fork upside-down front suspension with an adjustable 7-stage spring preload rear mono-shock. It is equipped with four-piston radial-mount front brake calipers that work on front dual 310mm discs and are paired with a single-piston rear caliper and 240mm disc. Two-channel ABS is fitted as standard. The CB’s riding stance is slightly on the aggressive side as the tapered handlebars are moved forward and a bit lower, while the footpegs have been moved back and higher when compared to the older model. The CB650R’s seat height is 810mm, the tallest among these three bikes.

The Honda naked bike is powered by a state-of-the-art 648cc DOHC 16-valve in-line 4-cylinder motor that pumps out 86bhp@12,000Nm and 57.5Nm of torque@8,500rpm. Unfortunately, in India, the CB650R’s engine is detuned because in the international market it boasts a power output of 94bhp and 64Nm of torque. It is mated to a 6-speed gearbox with assist/slipper clutch and traction or the Honda Selectable Torque Control (HSTC). The LCD all-digital instrument that it comes equipped with, reads outs speedometer, bar-graph tachometer, fuel gauge & fuel consumption gauge along with gear position and Shift Up indicator. 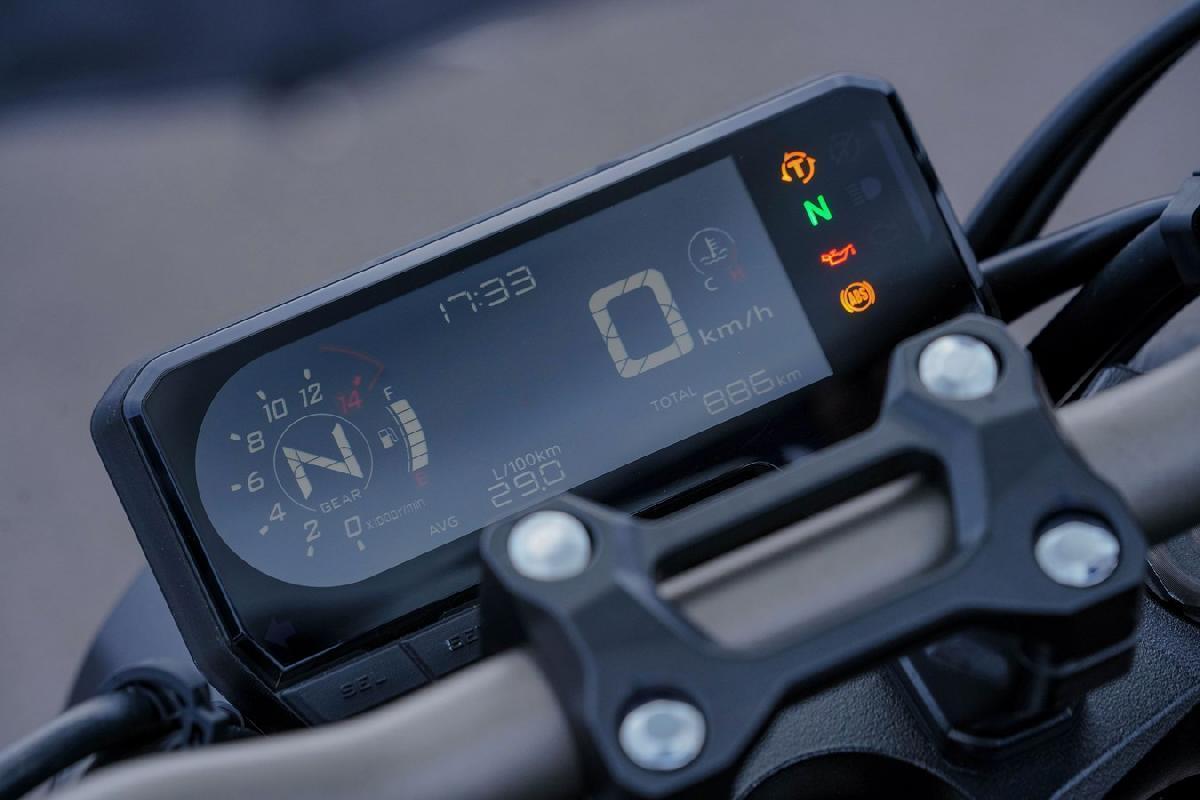 The CB650R comes with features like Emergency Stop Signal (ESS) technology that detects sudden braking and automatically activates the front and rear hazard lights, which flash to warn any nearby vehicles. It also comes with Honda Ignition Security System (HISS), an electronic anti-theft device that automatically disables the starting of the engine using electronic control.

Launched at INR 8.67 lakhs, ex-showroom Gurugram, the CB650R is the most expensive motorcycle in the segment. 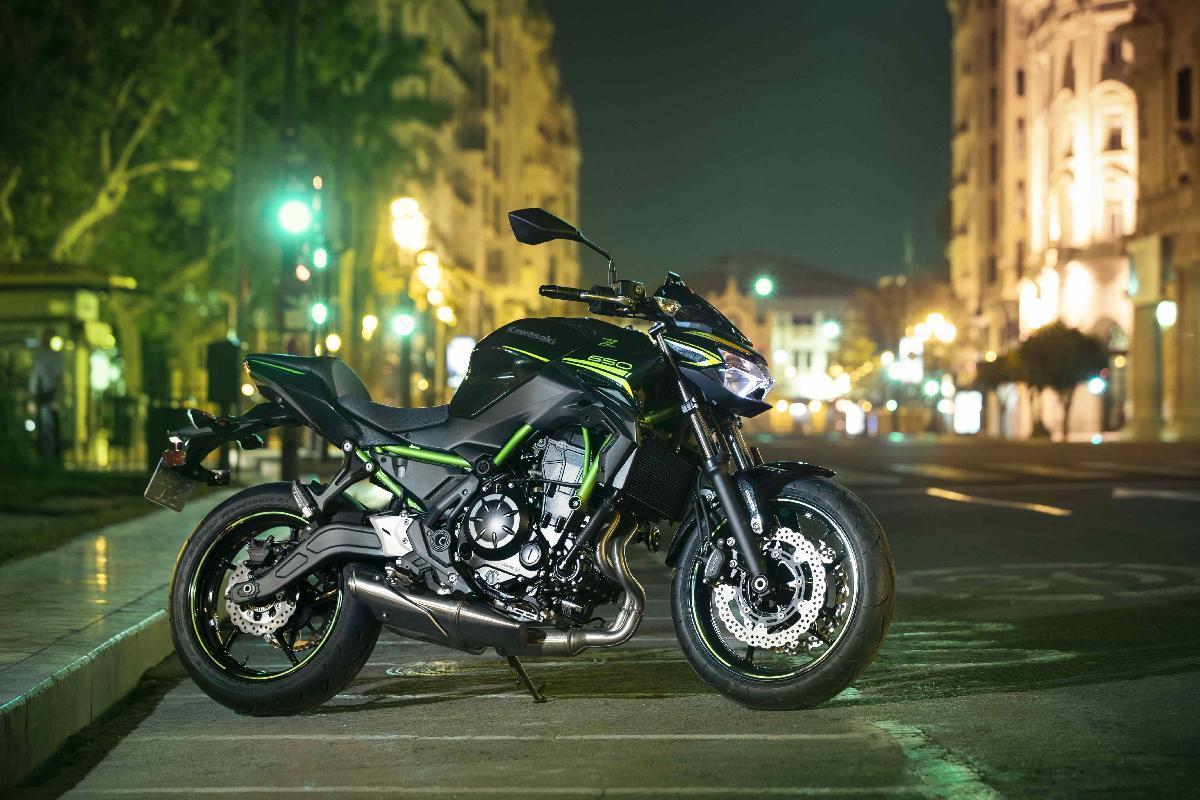 The Z650, no doubt, is the elder statesman, among the three naked bikes. However, last year Kawasaki gave the street fighter a much-needed update. Now, it looks like this mid-weight motorcycle has hit the gym. It’s high raised bulging tank, now, looks more muscular than the previous version. The two-piece low-slung headlight cowl is more aggressively designed with its forward-slanting lines and a sharp chin spoiler. Besides, now, it also sports an all-LED headlamp and an X-shaped LED tail light. The Z650 is only available in all black colour with the trademark Kawasaki green strips. Like the Trident and the CB650R, the Z also gets a compact exhaust neatly tucked underneath the body.

The Z650 sticks to the tried-and-tested steel frame with a steel swingarm like its more illustrated sibling, the Ninja 650. Weighing a shade above the Trident at 191kgs, the Z has the most accessible seat with a height of 790mm, but, in hindsight, its ground clearance is only 130mm. It now comes with a new set of Dunlop Sportmax Roadsport 2 tyres and 17-inch alloy wheels. The suspension system, on the other hand, is more traditional with 41 mm telescopic front forks and adjustable preload mono-shock in the rear. The Kawasaki gets twin 300mm discs in front with dual-piston and 220mm single at the rear. The Z650’s riding stance is a lot more traditional with straighter positioned footpegs and a lean-forward handlebar.

The Kawasaki retains the same 67bhp 649cc liquid-cooled, 4-stroke parallel twin, but the torque is down by 1.7Nm at 64Nm@6,7000rpm from its BS4 model. While, it continues to be mated to a 6-speed transmission, the Z650 also doesn’t get any fancy riding modes.

In terms of features, Kawasaki has added many new updates like replacing the LCD instrument cluster with an all-digital TFT console, which reads out speedometer, tachometer, gear indicator, a fuel bar gauge along with an ECO light. It has an inbuilt Bluetooth feature that gives you information like location, record rides, review recorded rides, customize your motorcycle riding settings and more on your smartphone via the Rideology app available on both the Apple App Store or Google Play. 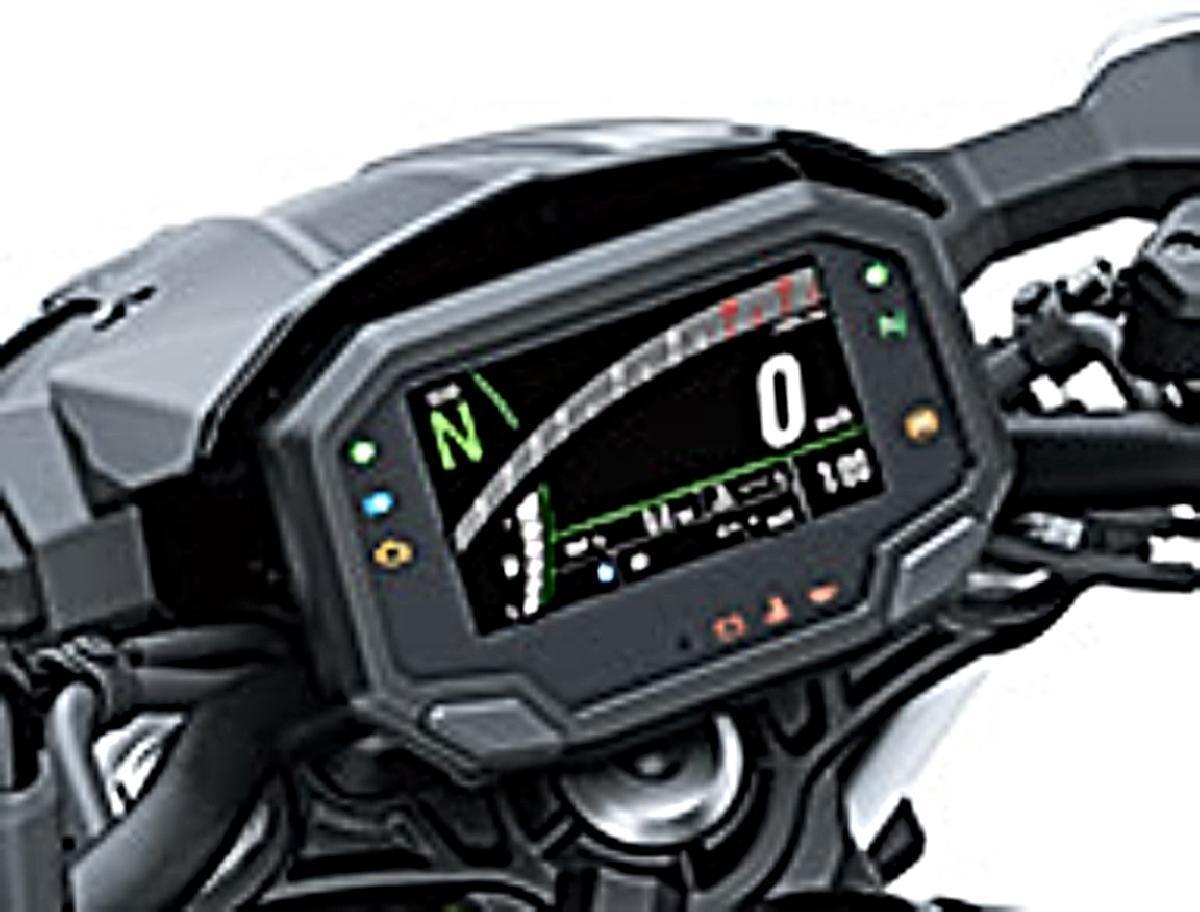 The Z650 is the most affordable naked bike starting from INR 6.18 lakhs, ex-showroom India.