Sedans, hatches or SUVs? Take your pick. There’s plenty of excitement lined up for all those who’re planning on getting themselves a brand new set of wheels.

The year 2020 has been a topsy-turvy one due to the ongoing pandemic. But like they say, “there is light at the end of the tunnel,” and we are seeing that vis-a-vis the automobile manufacturers who are planning to kickstart 2021 with a slew of new car launches lined up. With so much positivity and promise, here is what you should be keeping an eye out for.

Audi is gearing up to launch one of their bestsellers, the A4, in January. The facelift sedan's front grille is now bigger and flatter and sports prominent horizontal slats. The A4 has certainly hit the gym as it flexes muscular wheel arches and shows off a broader shoulder line. Audi has also redesigned both the LED headlamps and the rear lights. The rear also gets a chrome strip above the boot lid and another one on the bumper above the diffusor. Even though in the international market the A4 is available in both petrol and diesel engine options, in India it will come powered by the 188bhp 2-litre petrol which is capable of doing 0-100kmph in 7.3 seconds. This front-wheel-drive sedan will be mated to a 7-speed dual-clutch transmission. The A4 facelift is available for booking on the Audi India website and at dealerships. The 2021 A4 is expected to make its debut in January.

BMW has already confirmed that the 3 Series Gran Limousine will be launched on January 21st, 2021. It will be slotted higher than the current 3 Series sold in India and will replace the 3 Series Gran Turismo. With this launch, India will receive the first right-hand-drive long-wheelbase version of the 3 Series in the world. Speaking of long-wheelbase, the Gran Limousine's wheelbase is 2,961mm, 110mm longer than the standard 3 Series. Apart from the additional legroom for the rear passengers, Gran Limousine will look identical to the 3 Series from the outside and the cabin. The Gran Limousine is expected to be powered by the same 2-litre petrol and diesel engines which are already found under the hood of the 3 Series. The former pumps out 255bhp of power while the latter churns out 188bhp and both the engines have identical torque of 400Nm.

The French carmaker will make its India debut in early 2021. The C5 Aircross will be a CKD product and will be assembled at the Tiruvallur plant in Tamil Nadu. Even though the crossover has an overwhelming busy front grille with slim LED DRLs and squared shaped headlights, in terms of design, it is urbane and contemporary. It also offers a massive 230mm of ground clearance. As comfort is the key for Citroen, the Aircross is equipped with the iconic hydraulic suspensions that promise to carpet deep potholes without any stress. The cabin is very stylish and unconventional as it comes with a 12.3-inch touchscreen infotainment unit with split air condition vents. The well-crafted seats come with a 15 mm thickened textured foam surface for support and softness. It is equipped with driving assistance features like Highway Driver Assist, a level-two autonomous driving system, as well as six advanced connectivity technologies.

The C5 Aircross will get the 177bhp 1.6-litre petrol engine or the 173bhp 2-litre diesel motor under the hood. Both will be mated to either a 6-speed manual gearbox or an 8-speed automatic. The Citroen crossover will take on the likes of the Jeep Compass, Hyundai Tucson and the Skoda Karoq.

Renault's confirmed that the production-ready Kiger will retain 80% of its concept design. Going by the concept, the front grille is shaped like wings and comes with spilt headlamps and neon indications. It boasts of a ground clearance of 210mm, but the production version could be around 205mm, like the Nissan Magnite, as the Kiger concept was shod with 19-inch wheels. At the rear, it comes with a roof spoiler, C-shaped LED taillights and a central exhaust system. Renault hasn't revealed the interior, but it will get the same engine options as the Magnite, a naturally aspirated 1-litre petrol and 1-litre turbocharged petrol. The Kiger will offer the same transmission options just like the Nissan, but the former engine will also come with an AMT automatic option. 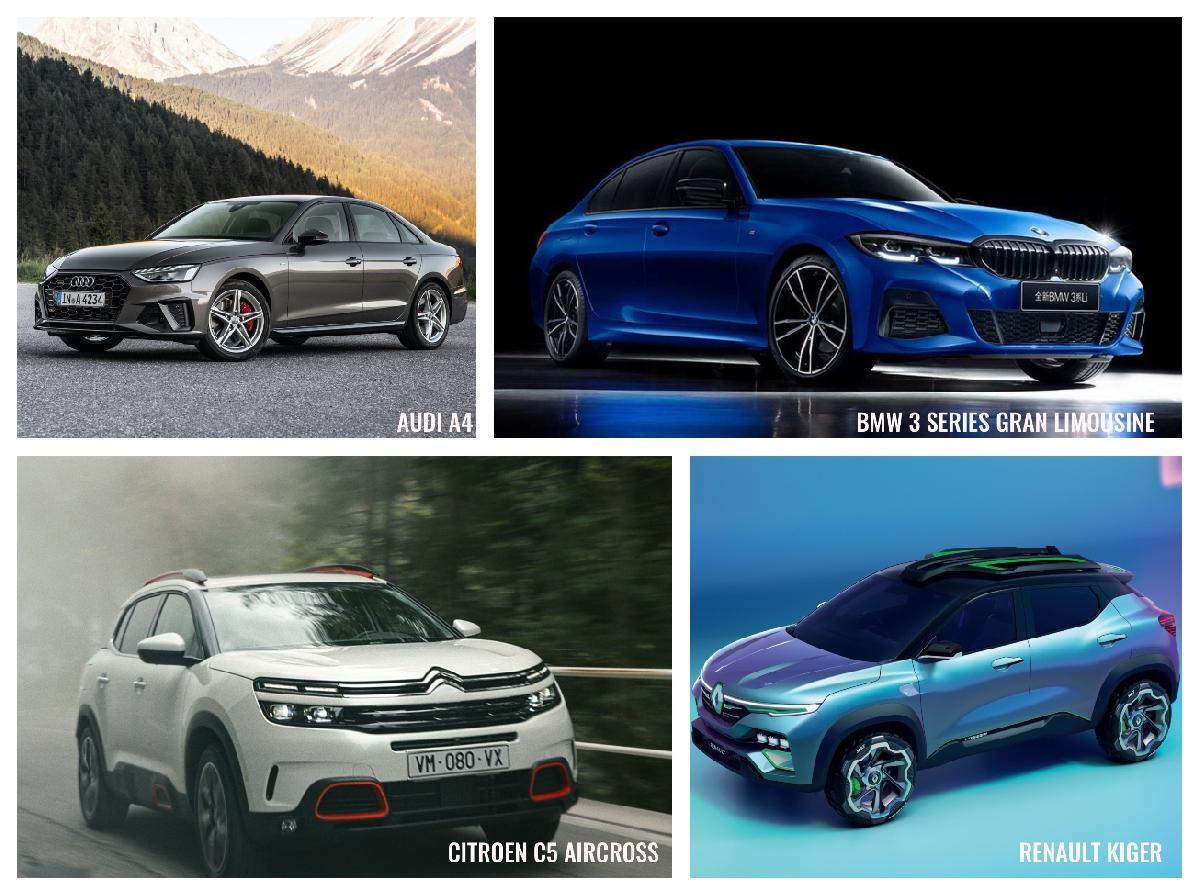 Tata Motors is getting ready to launch both the Altroz turbo petrol and the seven-seater Gravitas. Starting from the Tata premium hatchback, the Altroz, could be launched in January and will be powered by the Nexon's 1.2-litre turbo petrol engine. Even though the compact SUV gets 118bhp under the hood, the Altroz, will be tuned down to around 110bhp. Tata will initially launch the 5-speed manual version and later on in the year a dual-clutch automatic transmission trim will also hit the market.

The Gravitas, on the other hand, is a seven-seat version of the Harrier which was showcased at the Auto Expo in 2020. Based on the same OMEGA (Optimal Modular Efficient Global Advanced) platform like Harrier, which is derived from Land Rover's D8 platform, but being a three-row SUV, the Gravitas is around 62mm longer and 80mm taller. Even though visually the Gravitas will look more-or-less the same like the Harrier, it will get different colour options and alloy wheel designs. The same 168bhp 2-litre diesel engine sourced from FCA will also power the Gravitas and it will be mated to either a 6-speed manual or a 6-speed torque converter automatic transmission.

The Vision IN production-spec will make its world debut on March 21st. Going by Skoda's SUV design DNA, the Vision IN model will get the butterfly-shaped front grille with vertical slats and split headlamps and foglamps. Based on the MQB A0 IN platform and 4.26-metre-long, the new Skoda SUV will go against the likes of the Hyundai Creta and the Kia Seltos. Not much has been revealed about the interiors, but it will get a three-spoke multifunctional steering wheel, panoramic roof and digital instrument cluster.

The Vision IN will only be available in petrol like other Volkswagen Group vehicles in India and will come in two turbo petrol trims. While the entry-level variants will get a 1-litre 108bhp 3-cylinder engine with either a 6-speed manual or a 6-speed torque converter automatic gearbox, the top versions will be powered by the 147bhp 1.5-litre motor and will be mated to a 7-speed dual-clutch automatic transmission like the Karoq. Skoda is looking to localise the Vision IN by 95% and price it aggressively too.

The new A-Class sedan is not a direct replacement of the CLA as its platform is longer and unlike the coupe, the new car also offers better headroom for the rear passengers. Like the CLA, the A-Class Limousine will also be available in three engine options - 35 4MATIC 2-litre four-cylinder turbo engine with 302bhp, 2-litre four-cylinder diesel engine developing 191bhp and 2-litre petrol engine with an output of 184bhp.

The A-Class sedan variants will come fully loaded with a 10.25-inch twin-screen display that doubles up as an all-digital instrument cluster and an infotainment system, smart connectivity features, dual-zone climate control, a panoramic sunroof, wireless phone charger and much more. 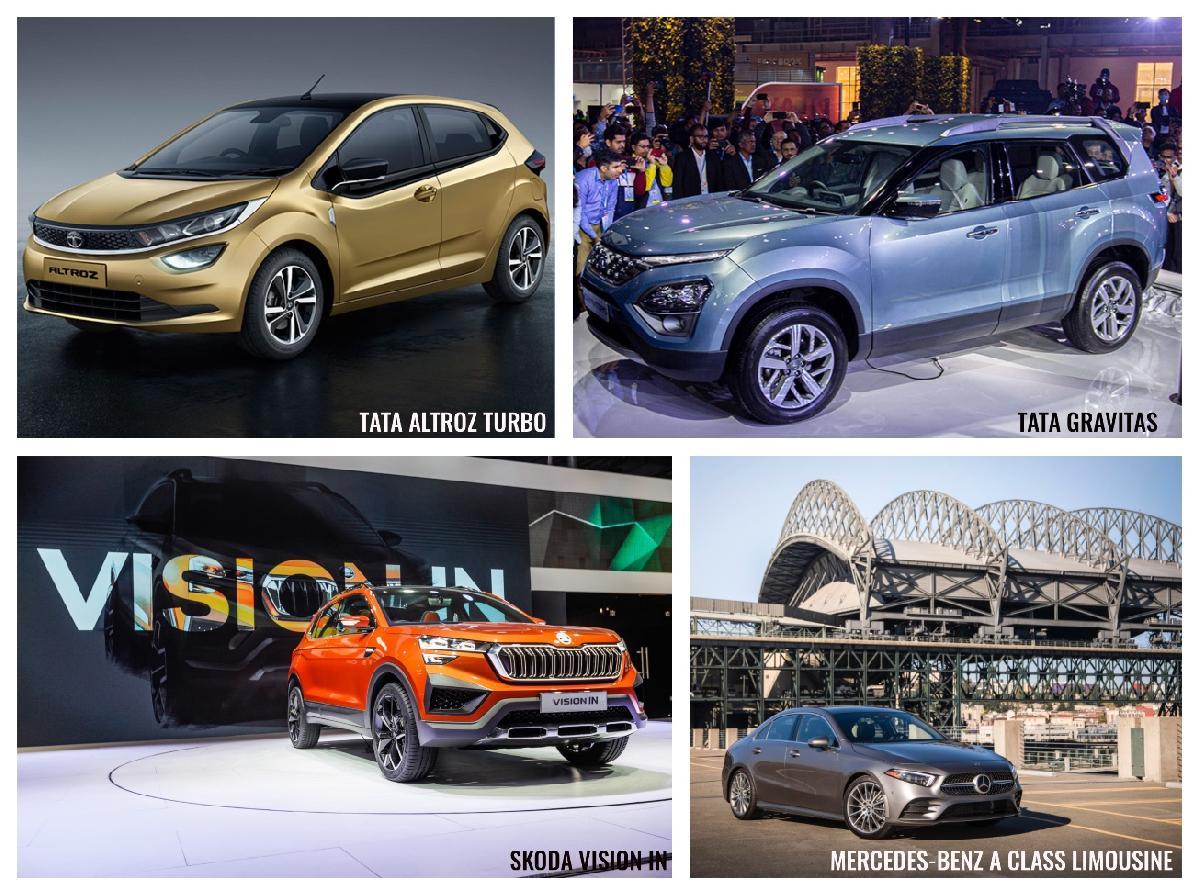 Volvo, another automobile manufacturer that's bid goodbye to diesel engines, has confirmed that they will bring the all-electric XC40 Recharge to India in 2021. The XC40 Recharge comes with two electric motors, one in front and the other in rear ensuring it offers all-wheel drive. With the powertrain churning out 402bhp, the compact SUV can do 0-100kmph in 4.9 seconds. It also offers a range of 418km and on a 150kW fast-charger system, the battery charges to 80% in just 40 minutes. In typical Volvo fashion and with safety being paramount, the 78kWh battery is neatly tucked inside an aluminum frame.

The XC40 Recharge gets an Android operating system based new infotainment system, which is a first for Volvo. It is also the first Volvo that receives OTA updates.

Maruti Suzuki will launch the all-new second generation Celerio which will be based on the Heartect platform like the current generation WagonR. This will ensure that the new Celerio will have a longer and a wider cabin. Apart from this, the hatchback will get an updated exterior design fand or the cabin as well. The biggest update in the interiors will be the 7-inch smart touchscreen. The Celerio will continue to be powered by the 67bhp 3-cylinders 1-litre petrol engine along with the more powerful 1.2-litre petrol motor that has an output of 82bhp. Both the engines will be available in 5-speed manual and the AMT automatic.

After 10 years of mild facelifts, Mahindra will finally bring in the second-generation XUV500. As expected, it will be based on a longer wheelbase than the outgoing generation translating into more cabin space, but the more important upgrades will be the powertrains. The new XUV500 will be available in 187bhp, 2-litre turbocharged mStallion petrol and 182bhp 2.2-litre turbo diesel engines. It will come with a 6-speed manual and 6-speed torque converter automatic transmission. There's a drastic change in the cabin as it gets a massive screen that doubles up as the instrument cluster and a touchscreen unit like Mercedes-Benz. It now comes with a flat-bottom steering wheel, panoramic sun roof along with state-of-the-art technology like Autonomous Driving Assist Systems (ADAS).