MG Motor’s parent company, SAIC Motor Corporation Limited, is only the second OEM (Original Equipment Manufacturer) that has its own battery plant for Electric Vehicles (EVs), a joint venture with CATL (Contemporary Amperex Technology), the world’s largest EV battery manufacturer. The batteries are produced on the outskirts of Shanghai, China, where 36 Giga Hour battery plant is being built, and which once completed, will be the biggest EV battery plant in the world.

“Battery is a word used rather loosely,” says Gaurav Gupta, Chief Commercial Officer, MG Motor India Pvt. Ltd who says “A battery is more of a combined box of modules that has cells in it." "Their batteries," he says, "are tested, as per European standards, put through eight testing elements, including water and dust resistance tests, so, in terms of overall quality, and testing of the battery itself, being Europe certified, they are fairly confident."

While the batteries are currently being imported into the country because of limited demand, over a period of time, MG Motor India, believes that they will have to start taking big steps that will focus on the repair technology of the battery. “The life of an electric vehicle battery is equal to the life of a car,” says Gupta. “These batteries can go to 2000 cycle charges which is a lot, then you will have a slight degradation, but the car battery can still be used. So, if right now its 340 kms, after seven-eight years, you might have a 10% degradation for it. A few years later it will go down further, but you still have a long life. Keep in mind that on a daily basis you don’t drive more than 50-60 kms, higher limit would be 100 kms. So, even if the range drops over many years, from 340 kms to 120 kms after a decade plus, you still have enough juice to keep going,” explains Gupta.

However, there is a second life for batteries and MG Motor India has tied up with two companies, Exicom and Umicore. Umicore has the world’s largest recycling plant in Europe and is into ‘Urban Mining.’  "With the cells and batteries opened up, all the precious metals from the cells and the batteries is taken out so that they can be reused. Though it can be used for new batteries, there are a plethora of options," explains Gupta. "Another option is that since the batteries still have charge capacity, to use them for storage options in order to reuse them. From power storage, telecom towers, mobile phone towers, they can be used in areas where powerbanks find application," he says. Studies are being done to demonstrate that these batteries can even be used to charge some small towns. “If you remember the earthquake of Puerto Rico, a few years ago, they had a huge issue with the typhoon and cyclone ravaging the whole country, that is when the proposal for these batteries to be sent there, to give them instant power, had been put forth, so there is a huge second life for these batteries that is being worked upon, both from an urban mining perspective and for storage power options as well,” says Gupta. 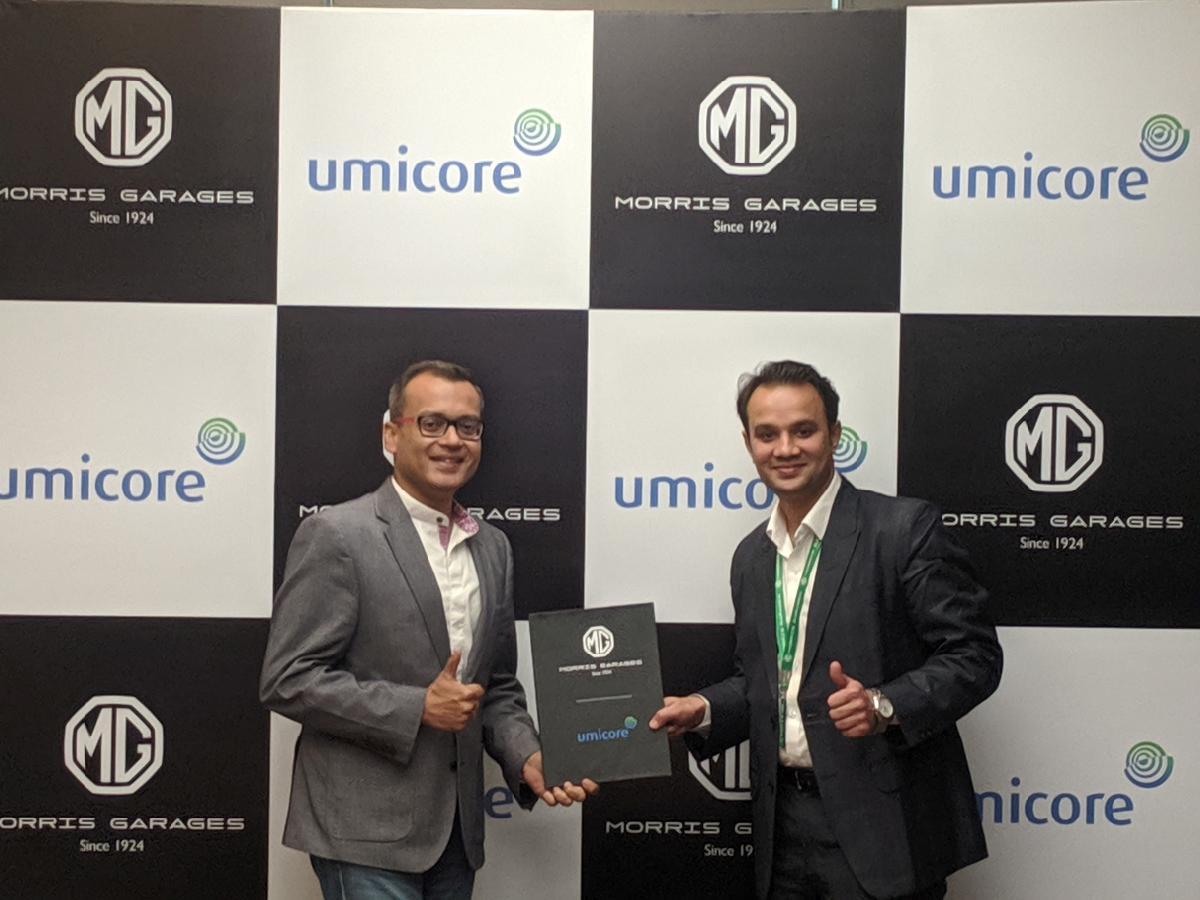 In India, one of the main concerns that consumers have is about charging their cars. “No matter who we speak to, they all love the technology, they understand it is green, it is silent, they really want to take the pledge of changing the area around them… change what you can… but they always say “lekin charge kahan karenge,” (Where will we charge the car) says Gupta. That is where MG Motor India is taking big steps. “We could have always said, here is the car and here is the charger, but we must own this with the customer. If you buy a car and I give you a charger and you go to your neighbourhood electrician and ask him to come and install it, he is not going to know how to do it because this is very technical in nature. He does not know what kind of cabling you’re using or what kind of insulation you’re providing. So, what we are doing is, we are providing you the AC fast charger and the installation at your home or office, free of cost, thanks to our tie up with a new start up, E-Charge Bay, who are going to close this last mile,” explains Gupta.

What that means is that if you’re keen on buying the MG ZS EV, MG Motor India, will have a person come and survey your home or office and depending on your usage pattern and availability of whether the cabling is available, and based primarily on your preference, they will do the ground work of installing this charger at your place, so, that you have a hassle-free ownership. “We have this survey done, the charger gets installed in your place, there is full guidance as to how you will use the charger for the car and then there are no hassles for you. Typically these chargers are very easy to use and will charge your car in six-eight hours. What does it mean? It means that it is just like having a mobile phone charged everyday. Depending on your usage, typically if it is a 340 range, you may not need to charge the car everyday, just the way you don’t top up your car everyday, similarly, you could do an overnight charge by plugging it in, a daily charge or a once in a while charge, depending on your requirement. Once you charge the car and you don’t use it, it doesn’t degrade. There is 1% battery loss in one year. So, if you charge the battery and keep it, you’re set, even if you don’t use the car for one year at all,” reveals Gupta.

Gupta strongly believes that the battery charging technology will evolve. “Consumers will start having their own charging points at home also. Besides, there can be an entire eco system of charging infrastructure being shared by consumers on their own,” says Gupta who feels that the transformation will be rapid as more EVs get launched giving consumers the confidence.

MG Motor India has come up with five different ways of charging the EVs. Every car will come with an onboard cable that can go into any socket. So, even if you’re sitting in a restaurant or at a roadside Dhaba, (Eatery) you have the socket, you can charge your car. Outside of MG’s select dealerships where the MG ZS EV will be purchased from, MG Motor India, will be installing superfast charging that will available 24/7. “Just the way we get used to petrol pumps being at a particular location, these chargers will be available 24/7 for our customers, you can go in, plug your car in and you can top it up,” says Gupta. Across key cities from Delhi to Chandigarh for example, MG Motor India, will have, in their dealerships, on-road, charging stations where the AC fast charger will be put up, so you can always top up your car. Lastly, there will also be roadside assistance, a mobile charging option, should you be out of charge, for emergencies.  However, the best part is that when your charging capacity of the battery is left to the last 50 km range you will get a notification upfront, but MG says that in 30 mins the roadside assistance can give you a 30 km charge also. “So, in 30 kms we will most likely, get you to our fast charging point, or your home charger,” says Gupta. 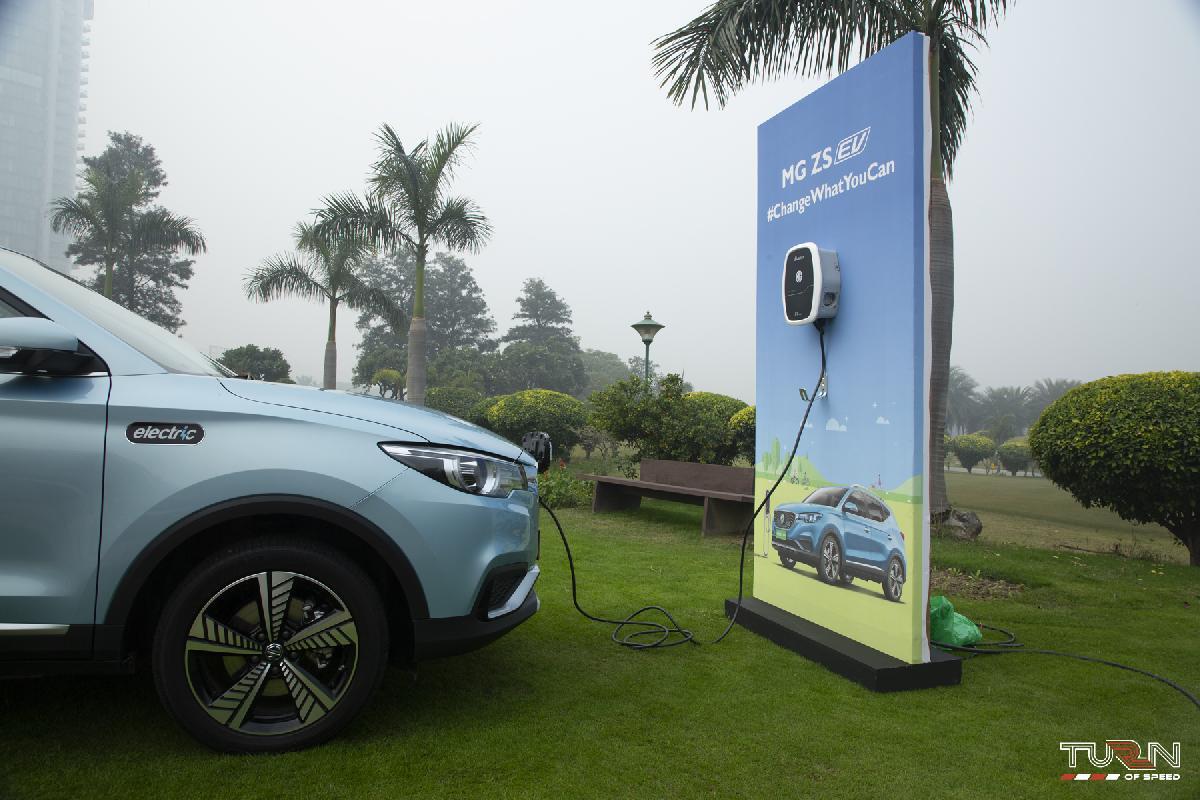 Gupta says that the infrastructure that they are putting up for the charging stations offers both CCS and CHAdeMO, European and Oriental specs, so that both types of cars can come in for charging. “The charging station has two cables coming out, so this will have the option of both. We could have said that we will only charge the ZS EV, but we have taken a stand, which I think is very important, and we are saying that we will build a category, here in India, so that anybody who has CHAdeMO or CCS, can bring in their cars and charge them,” says Gupta. However, this, will not accommodate the current BS chargers as their current offering is for a more modern generation of vehicles.

The transformation acceleration that Gupta speaks about will happen after a basic level has been reached in the country. “Right now, there are many people who are interested, but there is a resistance or concern whether they’re making the right decision. So, I think, it will start snowballing gradually but once it gains momentum, it will be very fast,” he says.

Gupta goes on to talk about the ease of charging an EV in his apartment complex where he has a separate line brought in, along with a separate meter. Delhi Government, he informs us, has a separate rate for Electric Vehicle charging wherein, the residences are charged INR 8-9/unit, and EVs are charged INR 5/unit respectively. “So, actually when I’m charging the MG ZS EV’s 44 kw battery, I’m paying about INR 5/unit which is about INR 240/- plus taxes, that comes to about INR 300/- for one full charge which gives you 340 kms plus minus some range also. INR 1/km, that’s how the math works. So, typically, you will take a line and this goes to the meter and then it comes to my charger and here I’m charging my car,” explains Gupta who goes on to tell us that the charging mechanism can also be activated remotely from the app.

We asked Gupta if “Battery swapping” was an option that had been considered. “Exposure has happened for two-wheelers and E-Rickshaws, etc, there you can do it.  In two-wheelers you can still replace your battery, but in cars the battery is in the floor of the car, so, you typically will not be able to replace a battery of a car, which is also a very heavy battery. Besides, you also have to make sure that once the battery is back in there, it is properly connected, so, you always keep it in a controlled environment,” says Gupta.

About the hazards of the battery Gupta says that they have already been tested for hazard conditions. “There are two kind of technologies, air cooled and liquid cooled batteries. We use liquid. What happens is depending on the heating of the battery, the liquid again starts to circulate it, bringing the temperature down, so, these are properly tested and that’s why they’re selling in countries like UK, Europe and Australia, so, form an occupants safety concern, I would say, nothing too much to worry about there, but having said that, always drive safely, exercise caution while driving, just the way you would drive any premium car,” he says.

Gupta is also quick to dismiss reports about batteries catching fire. “Those are exaggerated stories, there is a lot of protection to these batteries, having said that we have seen that in ICE engines also. Of course, this car has lesser moving parts so just the same way I would say, these batteries have the right amount of protection but do exercise caution, go slow on bumpy roads or where you think you can damage the car or the underbody and that’s about it. Of course, I wouldn’t say it is 100% full proof, no car is, but rest assured, adequate amount of protection has been provided,” says Gupta.