Mercedes-Benz EQC gives us a taste of what luxe Electric Mobility is all about.

Mercedes-Benz’s EQ range (which consists of EQ-Boost – Electrified Combustion Vehicles, EQ Power – Plug-In Hybrids, and EQ – Electric Vehicles), represents Intelligent Electric Mobility. Little surprise then that at a time when the Indian government is batting hard for Electric Vehicles (EVs), they decided to bring in the EQC as the first model to launch their electric offensive with, in India.

The EQC 400 4MATIC’s design may not appeal to many who have been dismissive of its plain vanilla looks, but what it offers in terms of driving experience, is second to none. Not to mention intelligence! Best experienced to be believed. However, we think that in terms of looks, it strikes a good balance between Mercedes’ traditional design language and now, which is a time that is waiting to head straight into the future and explore the numerous possibilities and so, at this point in time, the EQC’s design, looks very sensible to us. Although we drove the High-Tech Silver colour, (there are two other colours also to choose from – Polar White and Graphite Grey), we couldn’t help wonder what the EQC might look like in something that is in many ways Mercedes, yet a departure from what has been offered so far. The black panel radiator grill with louvres is flanked by the headlamp units on either side. 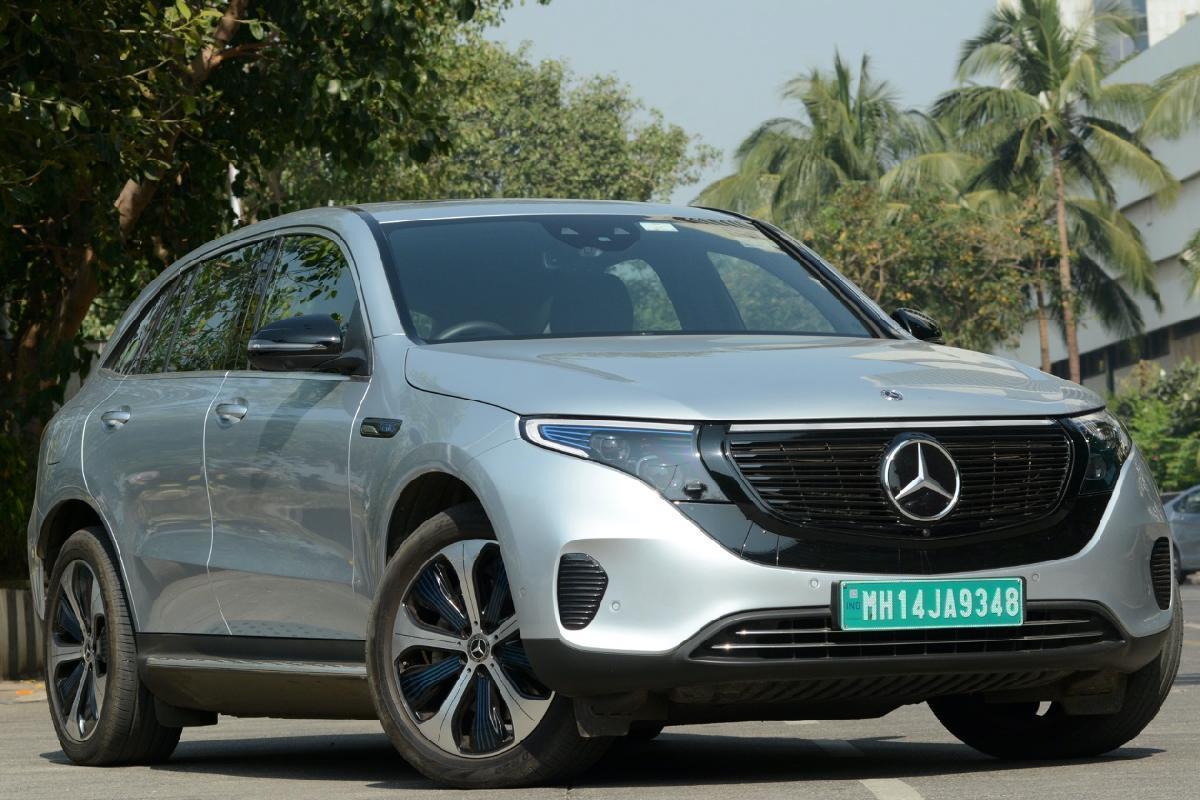 The multibeam LED headlamps that sit inside a high-gloss black housing along with blue trim lines give the EQC’s headlamps a distinct look. A remarkable thing that Mercedes-Benz has done is ensured that the oncoming traffic does not feel the strain of the EQC’s headlamps and the EQC’s driver does not have to use low beam while driving on the highways because the headlamps have been built in a manner to reduce light, so that it doesn’t dazzle other drivers. 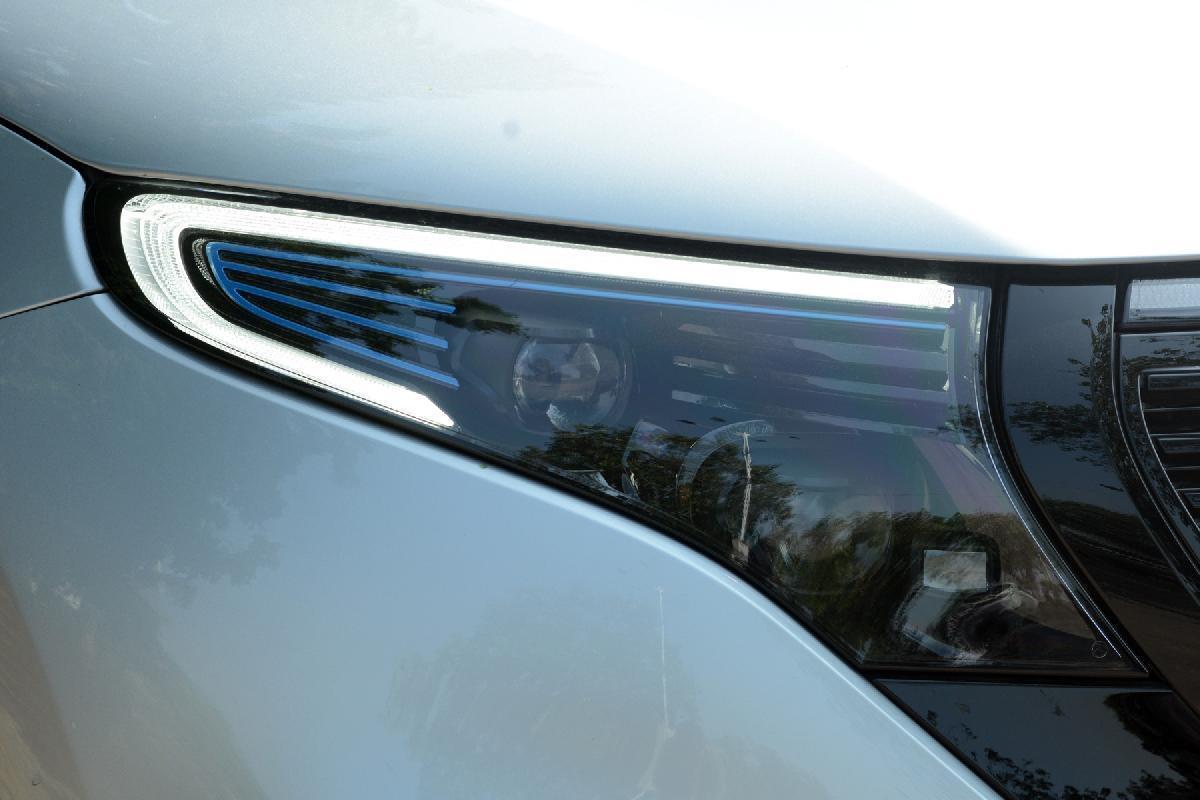 The rear also gets the LED treatment. What tells the EQC apart from the other Mercedes-Benz cars are the 20-inch, 10-spoke light alloy wheels that have been painted in a glossy black colour and have ‘energy blue’ decorative elements with a ‘highsheen finish’ that have been incorporated into it. The EQC badging in a glossy black with blue lettering looks very Mercedes-Benz. 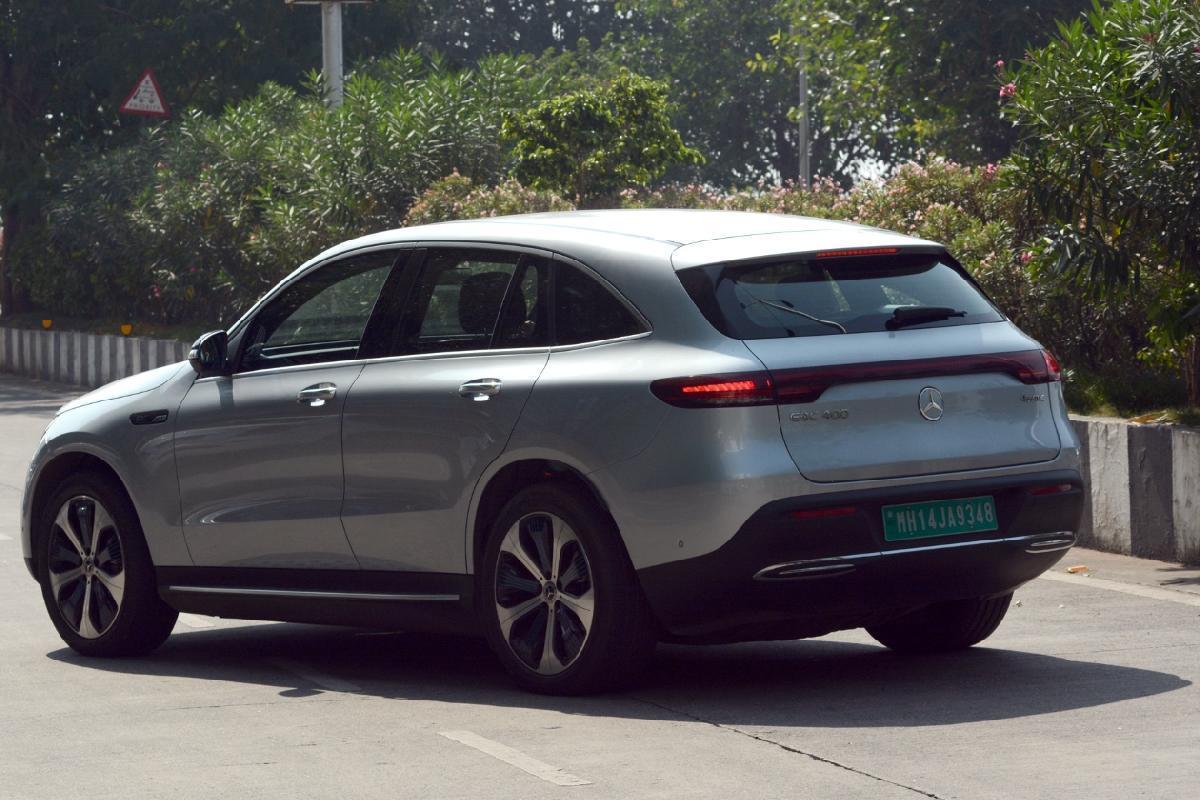 Inside is nothing short of a cockpit. A large, fully digital instrument display that is a touchscreen, not only plays all your media, but also gives you all other information related to the EQC in a crisp manner and that too in a matter of seconds. The central control gets an integral touchpad that can be used with finger gestures and it also recognizes your handwriting. It’s a pretty neat feature, especially when you want to scribble numbers or small words. 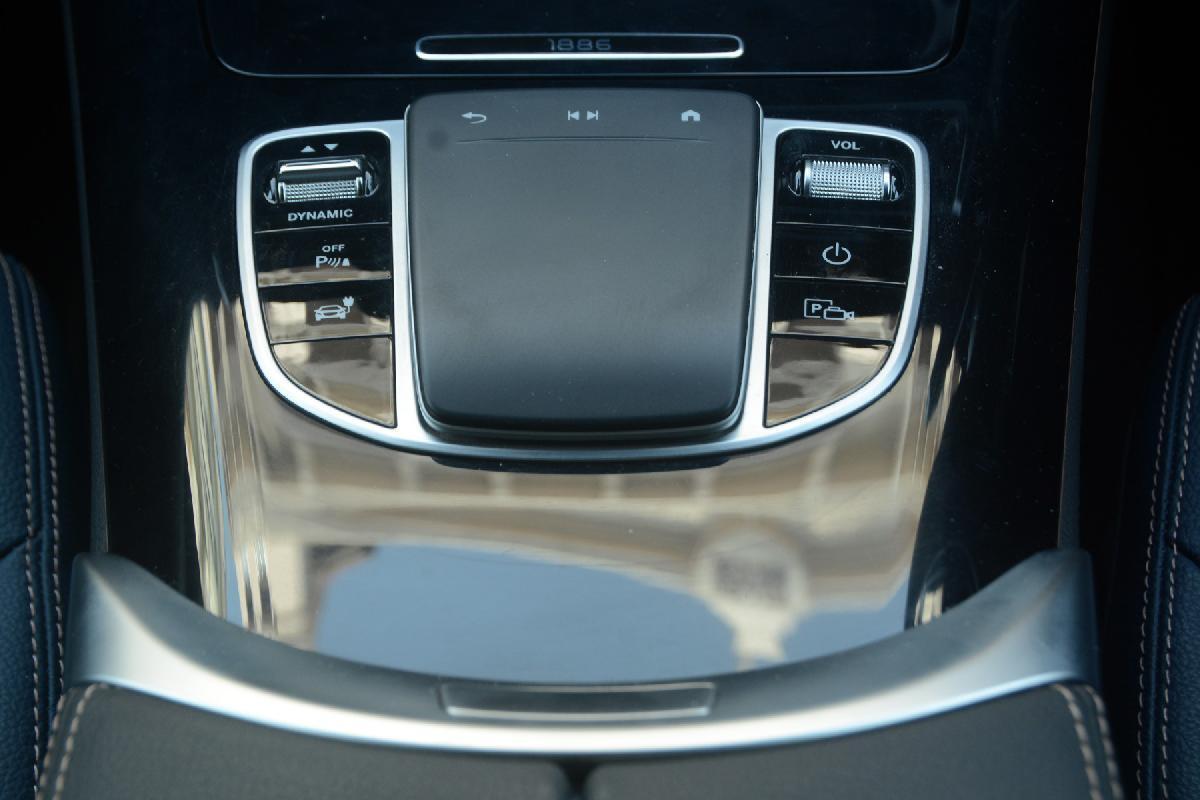 The MBUX (Mercedes-Benz User Experience) system which has taken the whole Mercedes-Benz experience to another level can now distinguish between the driver and the front passenger and it continues to enthrall in more ways than one. The natural speech recognition is a great feature that the EQC offers and so voicing commands and seeing them being executed is something we could all quickly get used to. So, you could just “Hey Mercedes,” all day long! There’s also fun to be had with the design and display in the instrument cluster. You can pick and choose a design that you fancy from modern classic, sport or electric art with colour changes. Besides, there is also smartphone integration with both Apple CarPlay and Android Auto so that you can use your phone apps and make the most of them while driving. While the Burmester surround sound system offers a superior acoustic experience, it also has to do with the fact that the front side windows filter out all noise thanks to the noise insulating glass that the EQC comes equipped with that only makes the entire music experience richer. Also, the EQC uses ionization and filtering processes to ensure that all occupants inside breathe better quality air and that really says a lot about the thought process that has gone into packing the EQC with all of the latest tech to ensure that their buyers get not only the best that’s on offer right now but that they’re also in sync with all the changes and developments that may be headed their way in the near future. The EQC also comes with a sunroof so that nobody feels claustrophobic and in terms of the fit and finish inside, rest assured, it’s a Mercedes. Yet, on offer are a variety of colours and materials should you wish to enhance the interiors further to suit your taste. 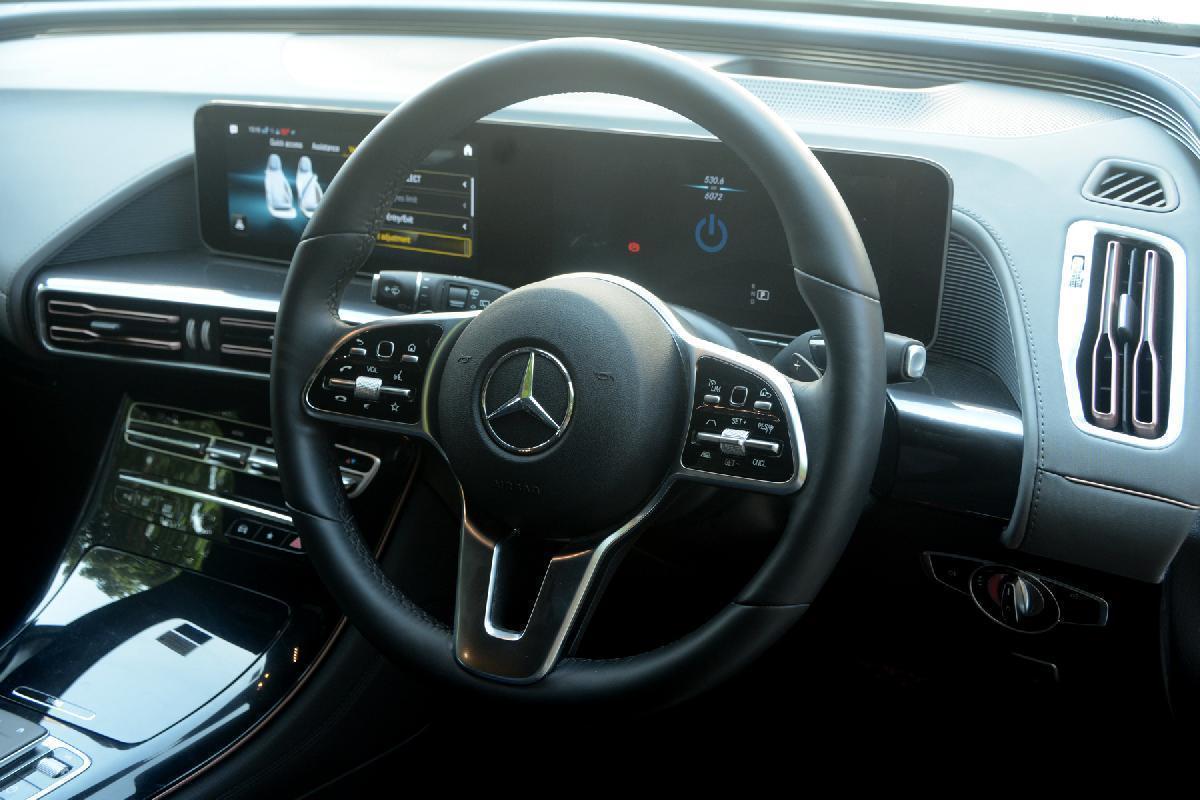 We got behind the wheel of the EQC, adjusted the leather, multifunction sports steering wheel with controls in glossy black, adjusted the ORVMs, the IRVM, the four-way lumbar support seat which came with four settings, higher, lower, weaker and stronger and set off. The first thing that drew our attention was the plethora of driver assistance systems that we saw on the digital instrument display. However, it was the pedestrian warning system that caught us unawares pretty soon after we started driving but driving the EQC was a refined experience – unlike anything we’ve seen before because the EQC, is the pinnacle of luxury, offering a super quiet cabin too. ALL EVs are silent, yes, but the EQC seemed to even diminish the sounds of honking from our streets. Also, it felt as if this mammoth SUV was gliding on the roads and for a few minutes we found ourselves checking over and over again if everything was okay and if the motor hadn’t switched off on its own. The EQC which comes with two asynchronous three-phase AC motors and has one mounted at the front axle and the other at the rear axle. It belts out 408 hp and 760 Nm of torque and offers a range of 445-471 which means after charging your EQC’s battery fully, you can easily embark on a trip from Thane to Ratnagiri without having to worry about anything. The battery of the EQC is an 80 kWh Li-On (liquid cooled) battery weighing 652 kg. Bolted to the EQC’s underbody because of low overall vehicle center of gravity, it is well-protected preventing it from any kind of damage. Once you reach Ratnagiri, you can recharge the battery before driving the EQC around again. 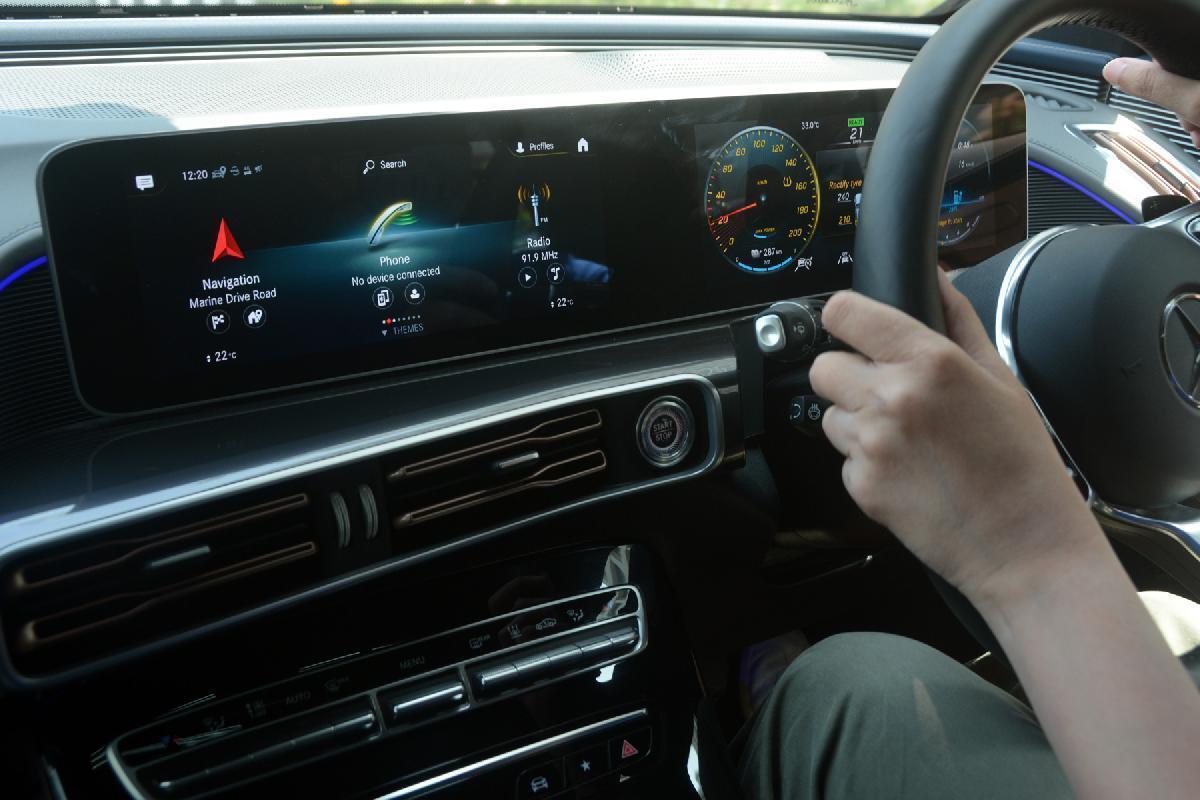 But how does one charge the battery of the EQC? Mercedes-Benz Wallbox to the rescue! Mercedes-Benz Wallbox has a charging capacity of 7.4 kW which can charge the EQC battery upto three times quicker than a conventional socket and can easily be installed at your home or office by Mercedes-Benz team. And if you’re on the road, all you have to do is drive to any of the Mercedes-Benz dealerships and get your vehicle charged there. The fact that Mercedes-Benz is also providing buyers with a battery certificate speaks volumes about the conviction they have in their batteries.

Overall, driving the EQC was an altogether different experience because of the sheer power available. Imagine 0-100 in 5.1 seconds! With a maximum speed of 180 kmph, the EQC should be able to quench your need for speed only too well. As for us, let’s just say that our driving experience was not just thrilling but also fatigue-free. 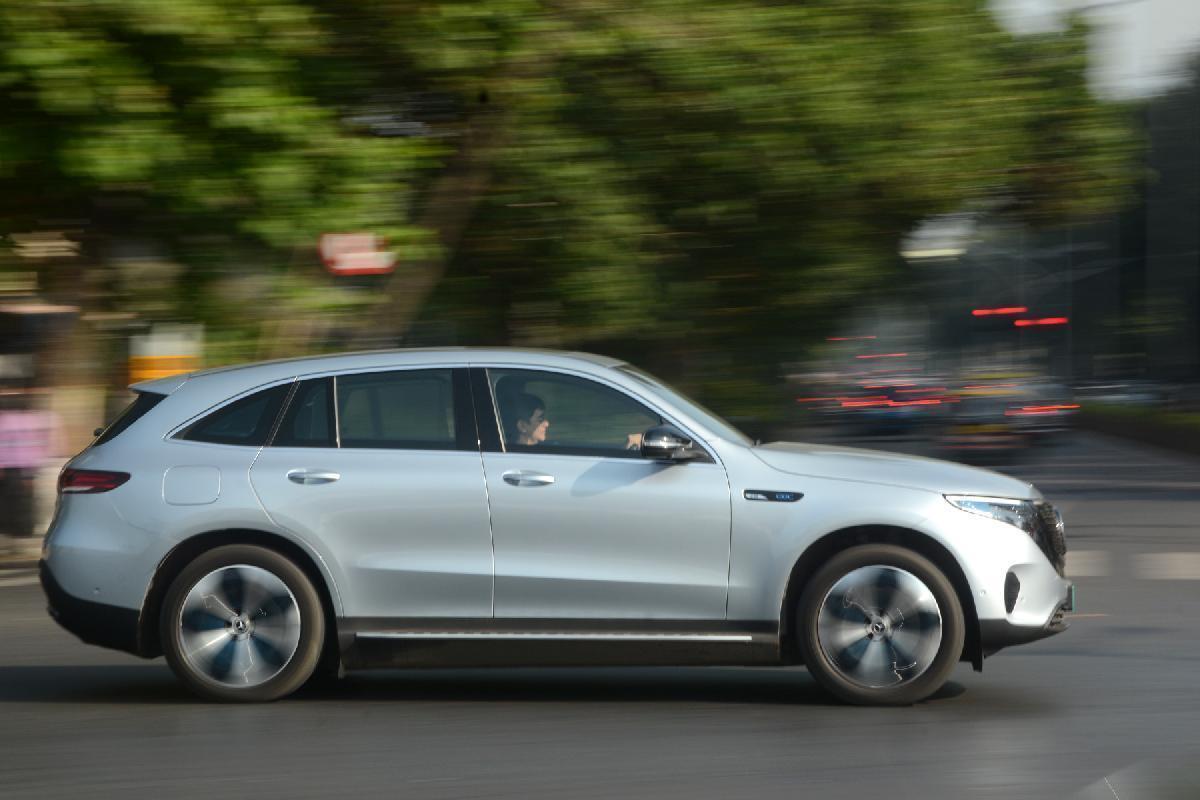 At INR 99.30 Lakhs, the EQC, is not merely for those who have the wherewithal to afford these snazzy set of wheels, but for those who also have it in them to wear a cool, futuristic attitude about having done their bit for the environment and who have made a conscious choice about zooming around in an EV with zero local emissions. So, is this Electric mobility the finest out there? Absolutely!  Without a shadow of a doubt!

That's one of the coolest dashboard I've ever seen 😍