Electric vehicles have come a long way from being eyesore concepts to state-of-the-art luxury vehicles that are insanely fast. We take a look at some of the finest EVs out there and tell you all about what makes them so appealing.

Electric vehicles have been around for a while, but in the last couple of years with the government pushing for greener mobility solutions, we are seeing a crop of new age EVs that offer state-of-the-art technology, luxury and even practicality. EVs have come a long way from looking like boxy cars to having an air of opulence that could give any internal combustion premium sedan or even a sports car a run for its money. Over a decade back when Tesla launched its first car, the Roadster, many dismissed it as a flash in the pan, now fast forward to 2021 and most major automobile manufacturers are venturing into the EV space or plan to do so shortly. Here’s a look at what’s out there to help you decide which lean, mean and green machines should make it to your wish list. 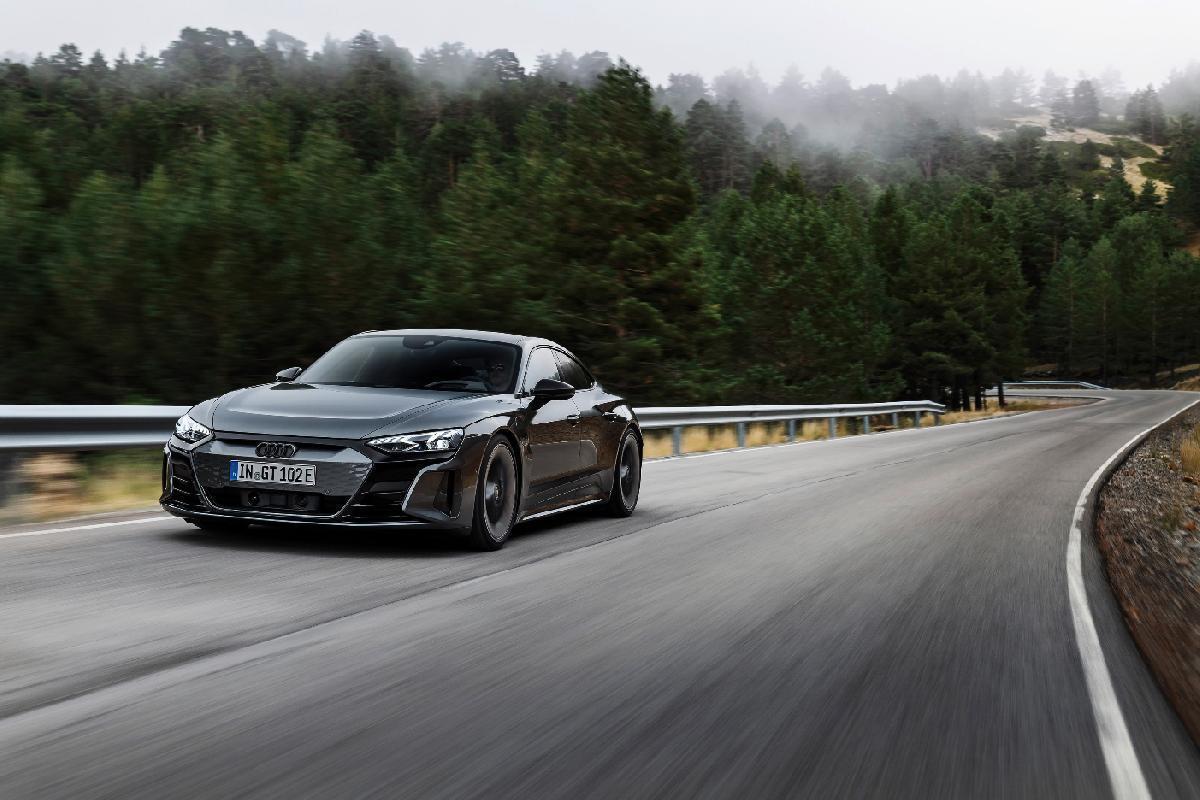 To give you an idea of what the e-tron Gran Turismo is capable of, here are its performance figures and numbers don’t lie. The GT can do 0-100km/h in 3.5 seconds and has a whopping 582bhp of unadulterated power with a top speed of 250km/h. It has two synchronous motors fitted to the front and rear axles with 830Nm of torque sent to all four wheels ensuring it is a legit quattro. Now this all-powerful GT is the RS version. There is also a ‘sane version’, the 469bhp e-tron quattro with 630Nm of torque. Both the trims boast of a launch control power boost of 2.5 seconds. The RS goes all berserk with 637bhp and the standard one gets 523bhp. Both the variants get a two-speed transmission, four driving modes — comfort, efficiency, dynamic, and individual, a 12.3-inch virtual instrument cluster and a 10.1-inch infotainment touch screen. 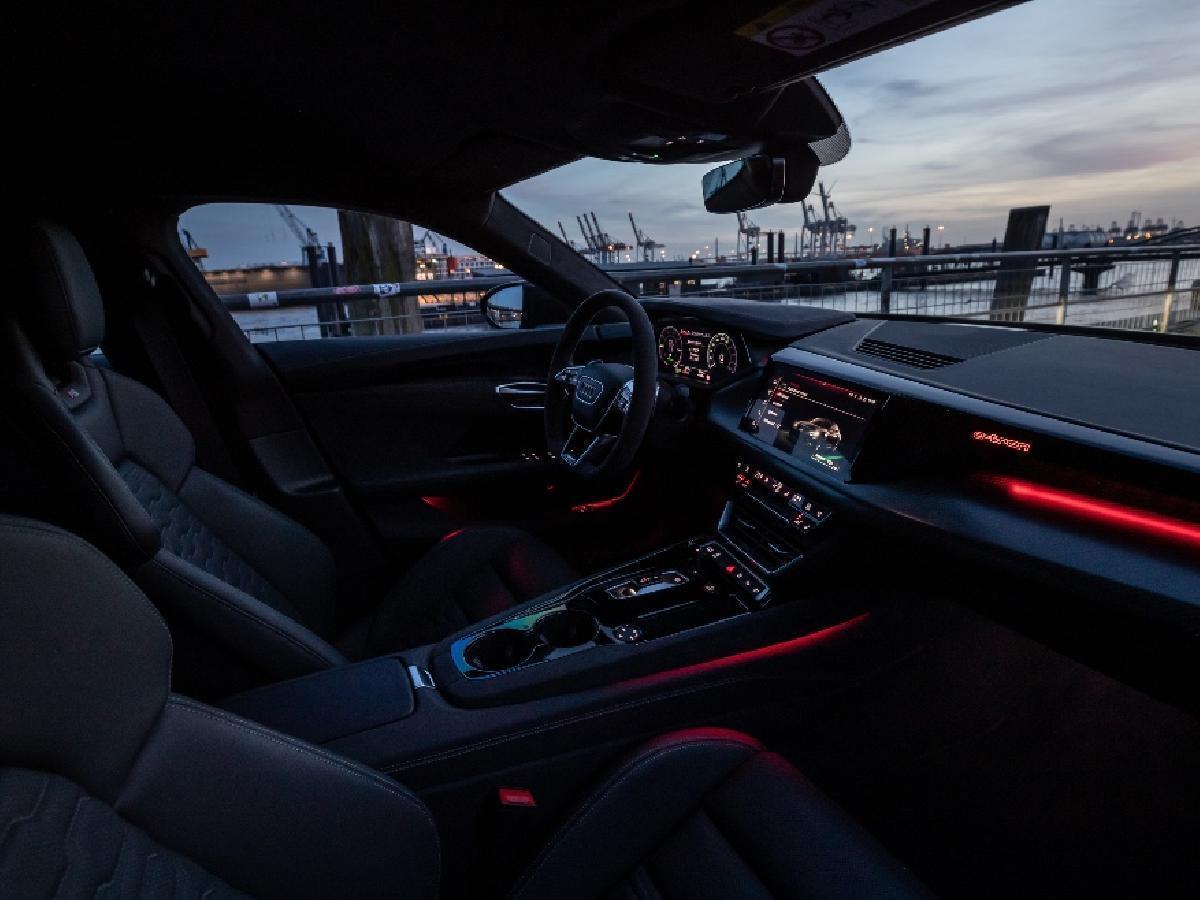 Audi claims the GT will offer a range of over 400 kilometres, according to the new WLTP (Worldwide Harmonized Light-Duty Vehicles Test Procedure) standard. The four-door coupe gets a high voltage 93kWh lithium-ion battery, which takes up the entire underfloor area between the front and rear axle. Audi also claims that the GT’s battery offers the fastest possible DC charging on the road as a 5 minutes charge offers a range of roughly 100 kilometres. 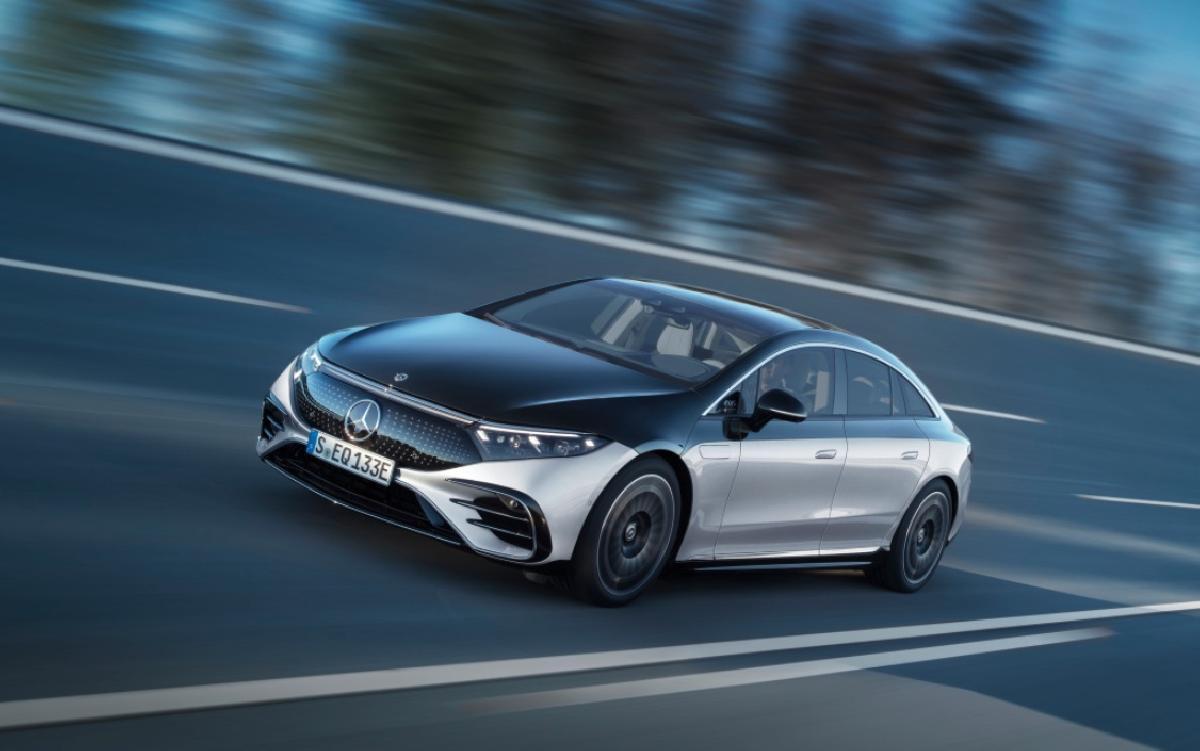 Simply put the EQS is the electric version of the S-Class. It is the world’s most aerodynamic production car in the world, beating Tesla Model S. Based on a brand-new platform specially created for Electric Vehicles, this will also be used by upcoming vehicles like the EQE, EQE SUV and EQS SUV.

The EQS is will be available in two versions, the rear-wheel-drive 450+ with an output of 328bhp and 568Nm of torque while the 580 4MATIC boasts 516bhp and 855Nm. The former can do 0-100km/h in 6.2 seconds while the latter does it in 4.3 seconds. The new generation batteries have an energy content of 107.8kWh, which is 26% more than the EQC. Based on the power output of the EQS, it can offer a range of 770km according to WLTP. At a fast-charging station, this luxury electric sedan can offer a range of 300 kilometres in just 15 minutes. It comes with four driving modes — Comfort, Sport, Eco and Individual.

The EQS comes with a 56-inch Hyperscreen option, which basically replaces the dashboard panels with three display screens. While the 12.3-inch LCD digital instrument cluster and OLED 12.3-inch screen for the front passenger are standard, the massive OLED 17.7-inch infotainment touch screen is an additional feature. 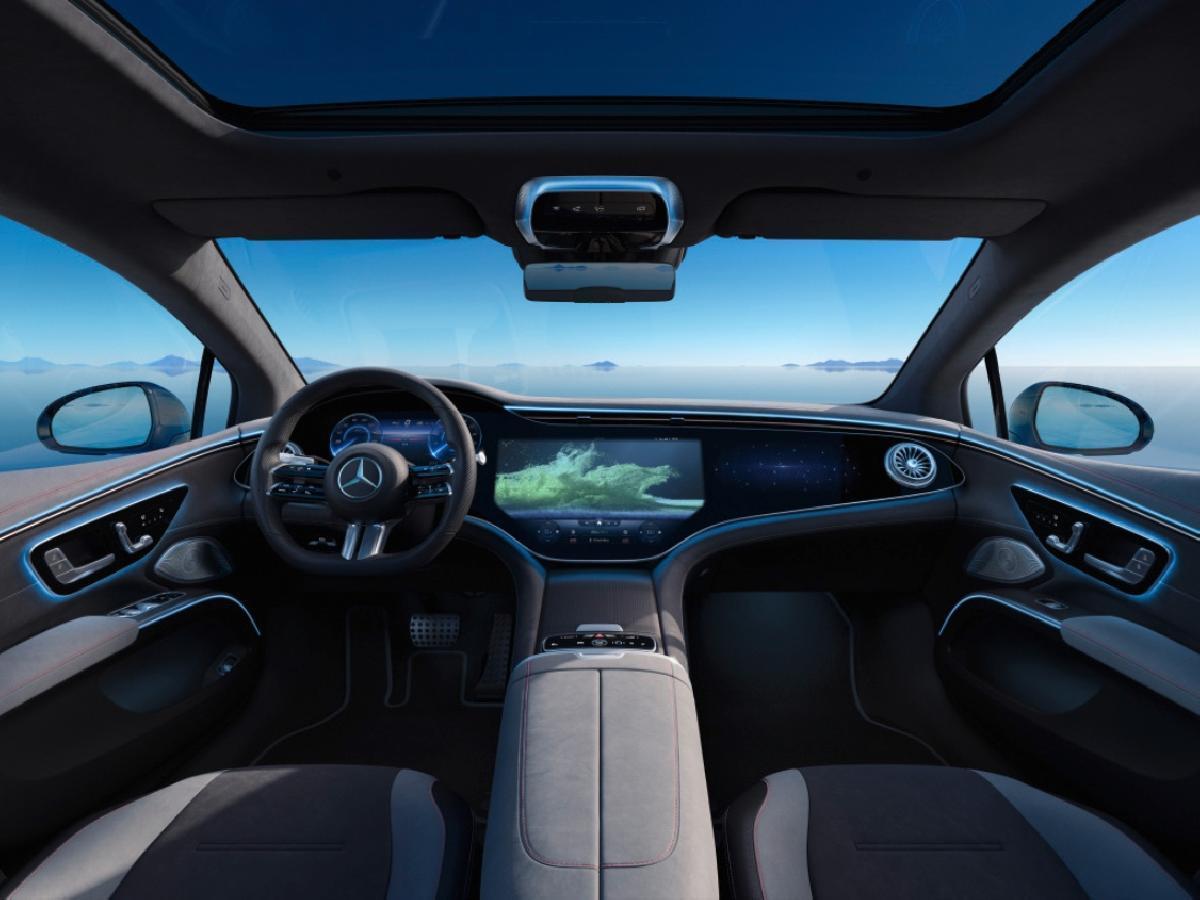 The EQS comes standard with air suspension and adaptive dampers. With 350 sensors, they record distances, speeds and accelerations, lighting conditions, precipitation and temperatures, seat occupancy as well as the driver's blink of an eye or the passengers' speech. As an option, it also comes with automatic doors for both the front and the rear. When the driver approaches the car, all the door handles extend, unlock, and the driver's door opens automatically. Using MBUX, the driver can also open the rear doors. 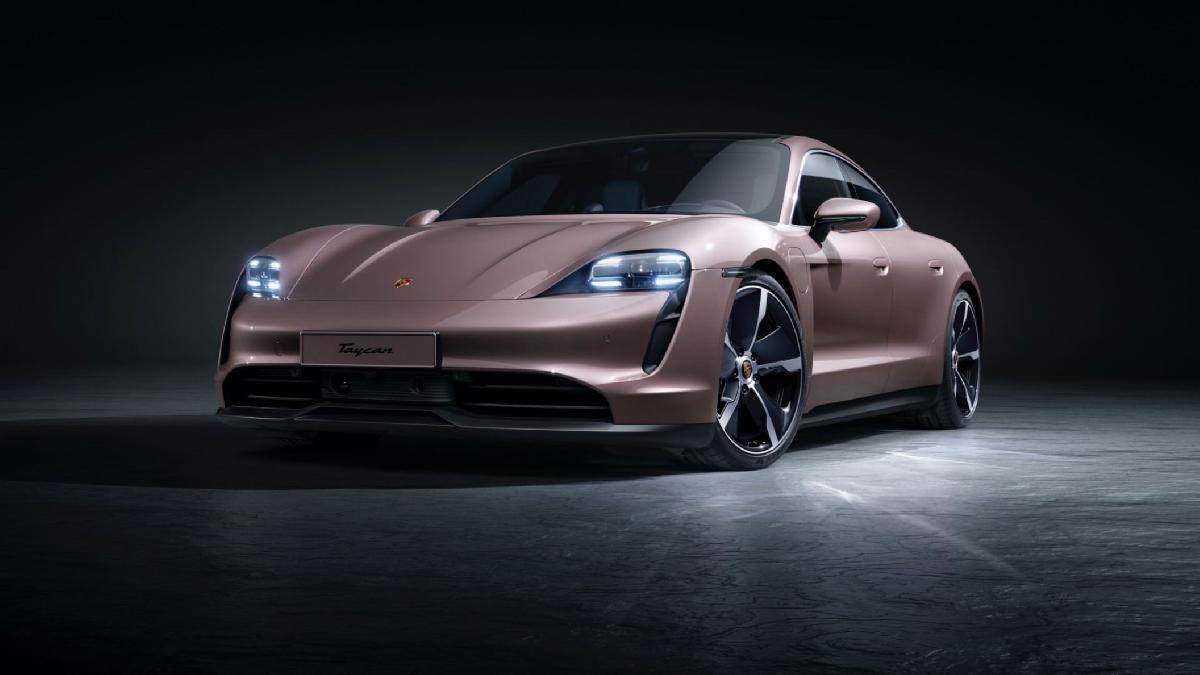 Both the Porsche Taycan and the Audi e-tron GT are based on the Volkswagen Group’s J1 platform and share the battery, the two synchronous motors, the two-speed transmission and numerous chassis components. The all-electric sports car is available in four trims — standard Taycan, 4S, Turbo and Turbo S. The new entry-level model is rear-wheel drive and is available with two battery sizes — 322bhp 79.2kWh Performance Battery with 345Nm of torque and the 93kWh Performance Battery Plus that churns out 375bhp and 357Nm. Based on WLTP, the former has a range of 354-431km and the latter is 407-484km. Both batteries have the same top speed of 230km/h.

The Turbo is powered by a 93kWh battery with 617bhp and 850Nm of torque for launch control with a top speed of 260km/h. It has a range from 383-452km according to WLTP. The Turbo S gets the same battery capacity, identical power output, but the torque on launch control is a mind-blowing 1,050Nm and has a range of 390 – 416km. 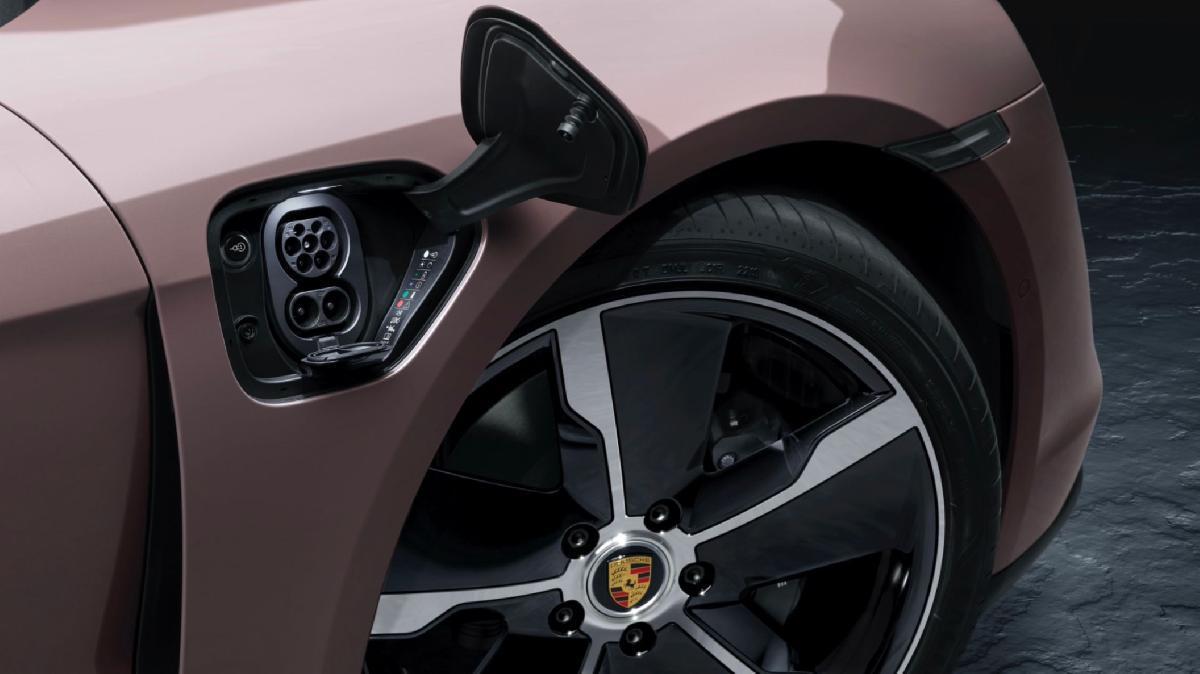 Like its competition, the Taycan also has minimum physical buttons in the cabin. The curved instrument cluster is a massive 16.8-inch screen, the centre of the dashboard gets a 10.9-inch touchscreen and below that is an 8.4-inch display for climate settings, check the battery status, navigation system, Apple CarPlay features, charge ports etc. If you still think all this is very basic then as an additional feature you can opt for another 10.9-inch touchscreen for the front-seat passenger, and a 5.9-inch touchscreen in the back seat for the rear passengers. 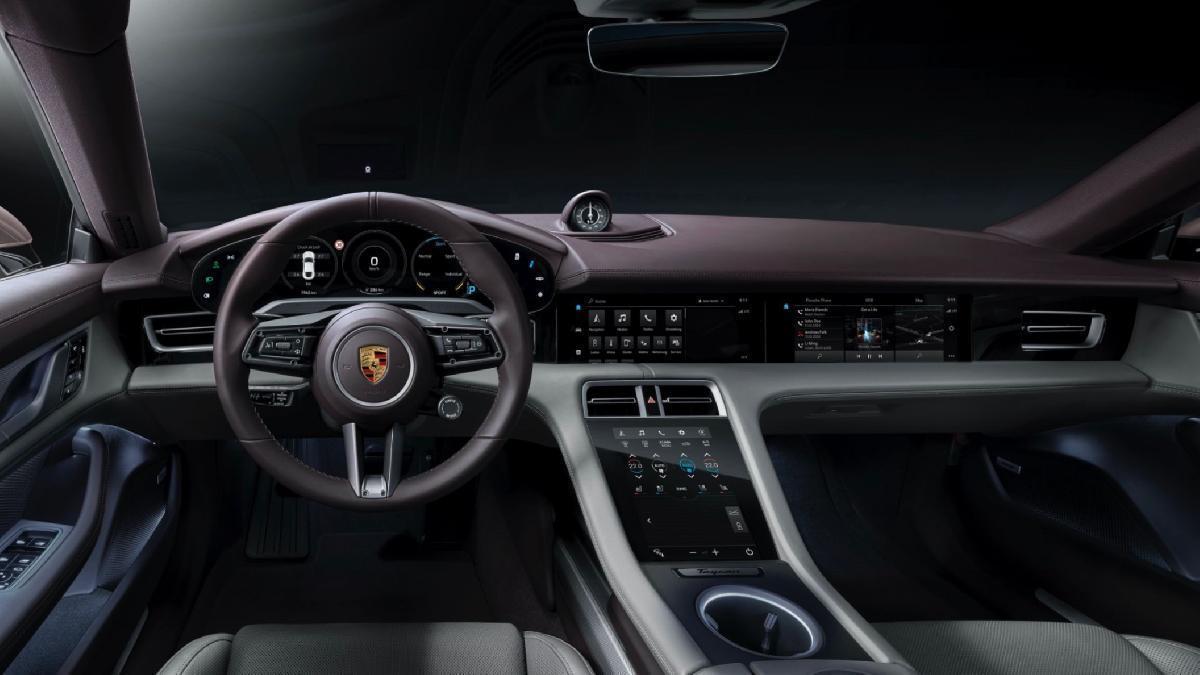 Apart from the entry-level Taycan, the rest of the trims come standard with adaptive air suspension, which can be adjusted according to the road conditions and the four driving modes — Range, Normal, Sport and Sport Plus. 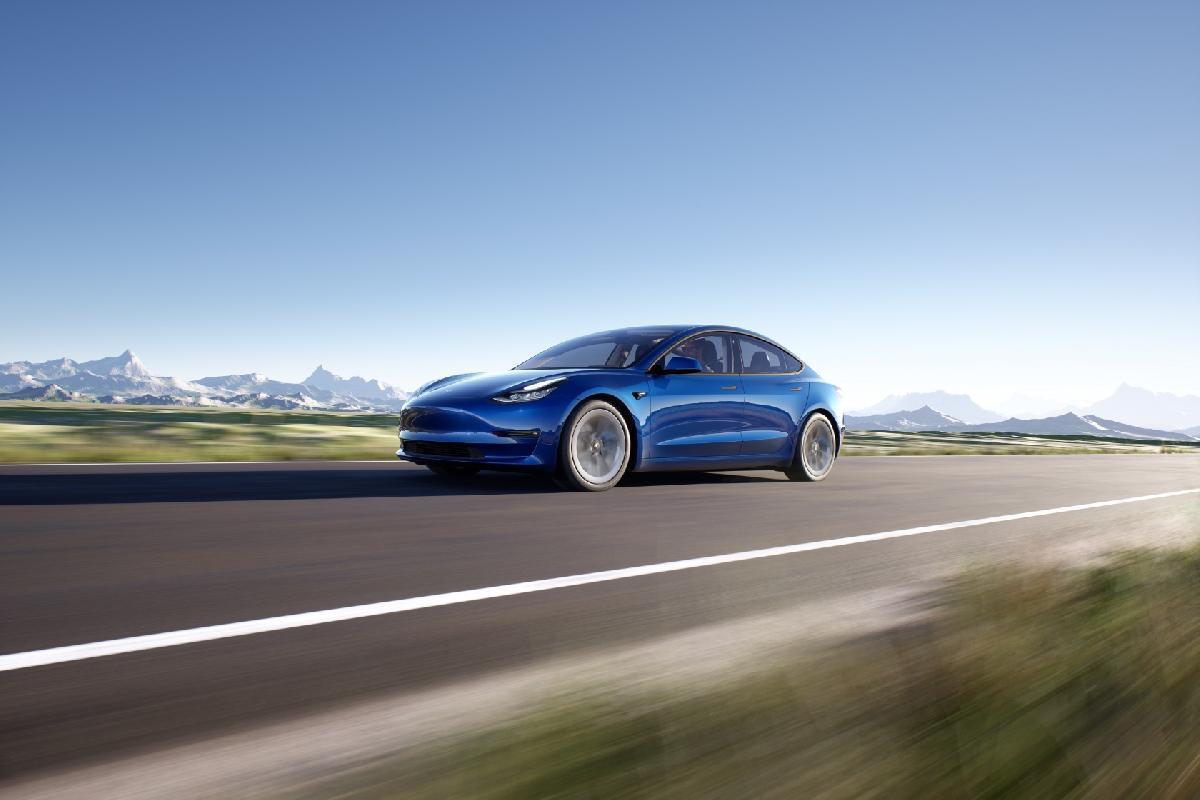 All three come equipped with an 80.5kWh lithium-ion battery pack tucked beneath the floorboard.

The Model 3 comes with tech-laden optional features like Auto Lane Change, Navigate on Auto Pilot where the car engages in semi-autonomous driving mode on the highway and changes lanes by itself by auto steer, automatic parallel and perpendicular parking, Summon mode where the car at a parking lot automatically comes to you rather than you searching for the Model 3, besides many more. 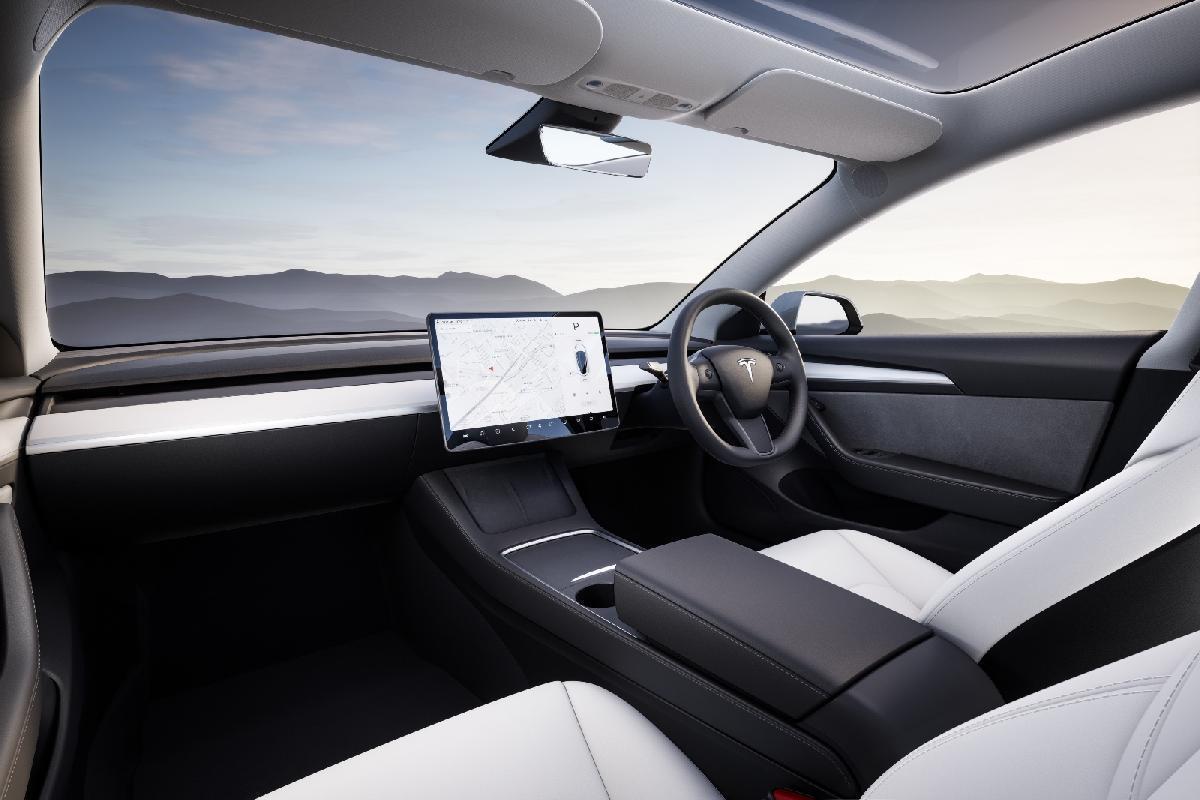 The cabin of the Model 3 is fairly spartan with a gigantic 15-inch touchscreen unit on the centre of the dashboard that houses all the controls along with options like streaming on Netflix, YouTube etc. The centre console below the display has a cubby hole to store and charge two mobile phones.

The Model 3 is expected to be Tesla’s first car for India and will start from INR 55-60 lakhs. 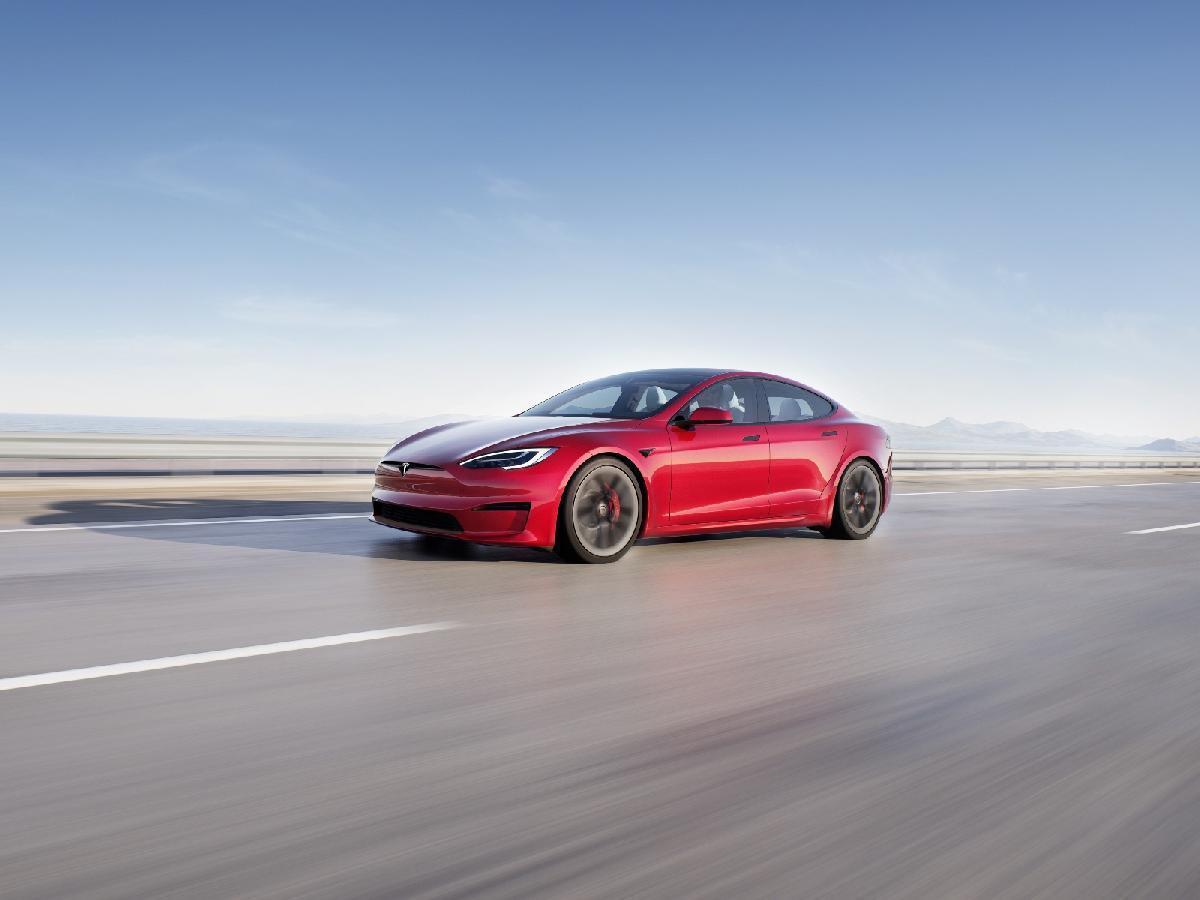 Model S is the car that put Tesla on the map and is considered the first mass-market electric sedan. This flagship model comes standard in all-wheel-drive and is available in three trims —Long Range, Plaid and Plaid +. The Long Range is powered by two motors, does 0-100km/h in 3.1 seconds, a top speed of 250km/h and a range of 663km. The Plaid and Plaid+ get three motors with an insane output of 1,006bhp, with a top speed of 321km/h, 0-100km/h just below 2 seconds and a range of 627km and a range of over 836km according to WLTP. All three variants came with a 98kWh lithium-ion battery pack.

The Model S sports a 17-inch touchscreen unit with integrated temperature controls and HEPA filtration. It comes standard with ventilated front seats and unlike Model 3 an all-digital driver’s console. The electric sedan comes with wireless mobile charging in front as well in the rear armrest and a touchpad display for the passengers sitting in the back. 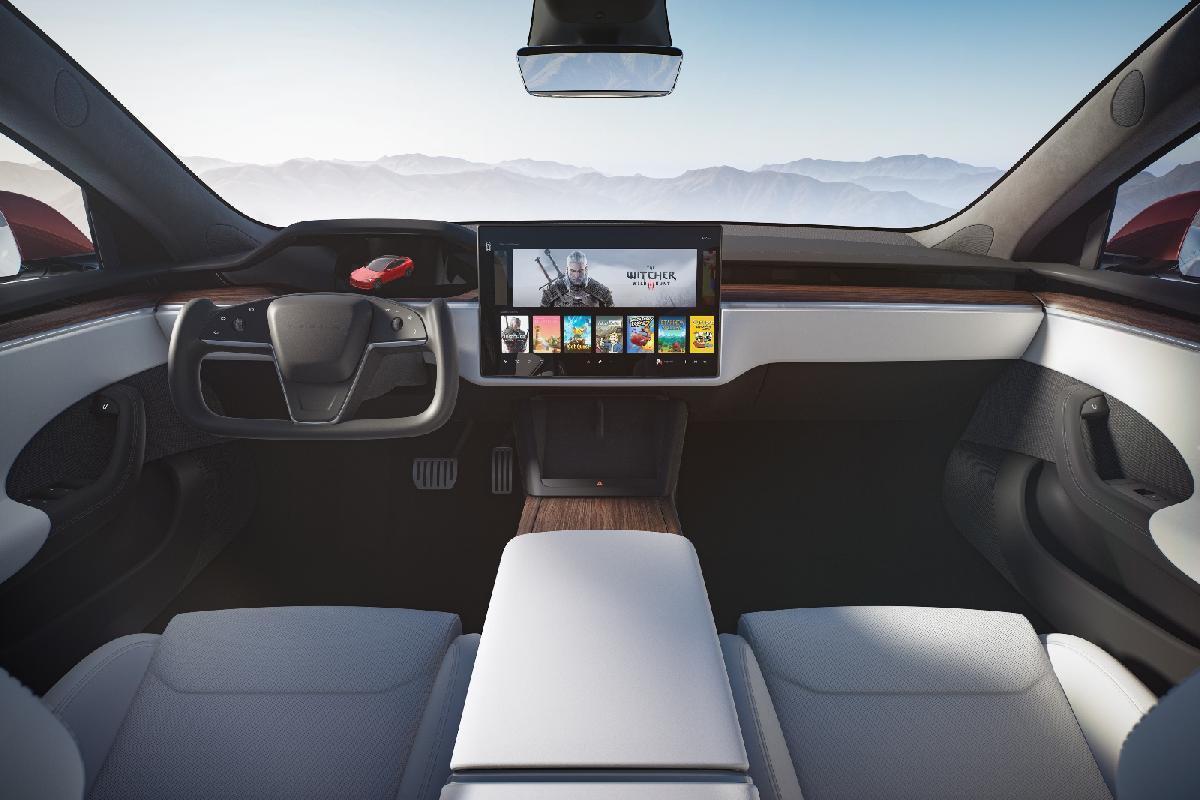 In terms of safety, the Model S boasts of a five-star safety rating in the Euro NCAP tests and comes standard with automated emergency braking, lane-departure warning and adaptive cruise control with semi-autonomous driving mode.