The brand new ZS EV, from MG Motor, is going to win a lot of hearts, and no, it is not because they have signed on Benedict Cumberbatch as their brand ambassador!

MG Motor’s latest offering the ZS EV, which is already being sold in other global markets, comes into India via the CKD (Completely Knocked Down) route, and seems to tick all the right boxes. It is a great size, and hopefully, when MG launches it, it will also be the right price, to take on competitors such as Hyundai Kona. Add to that the fact, that it enters the 300 kms plus range territory which buyers have now come to expect from most EV manufacturers while buying an EV this size.

There is an understated elegance about the ZS EV which is available in two variants, Excite and Exclusive. (The Excite variant misses out on the massive Skyroof, which occupies 90% of the EV’s roof.) The ZS EV looks gorgeous in all the three available colours, Red Currant, Copenhagen Blue and Ferris White. We drove the Exclusive variant, in Copenhagen Blue (as you can see in the pictures,) a relatively new colour on our roads, but which has elicited a lot of interest internationally, vis-a-vis other EV manufacturers, who are also showcasing EV prototypes at international auto shows in similar shades. 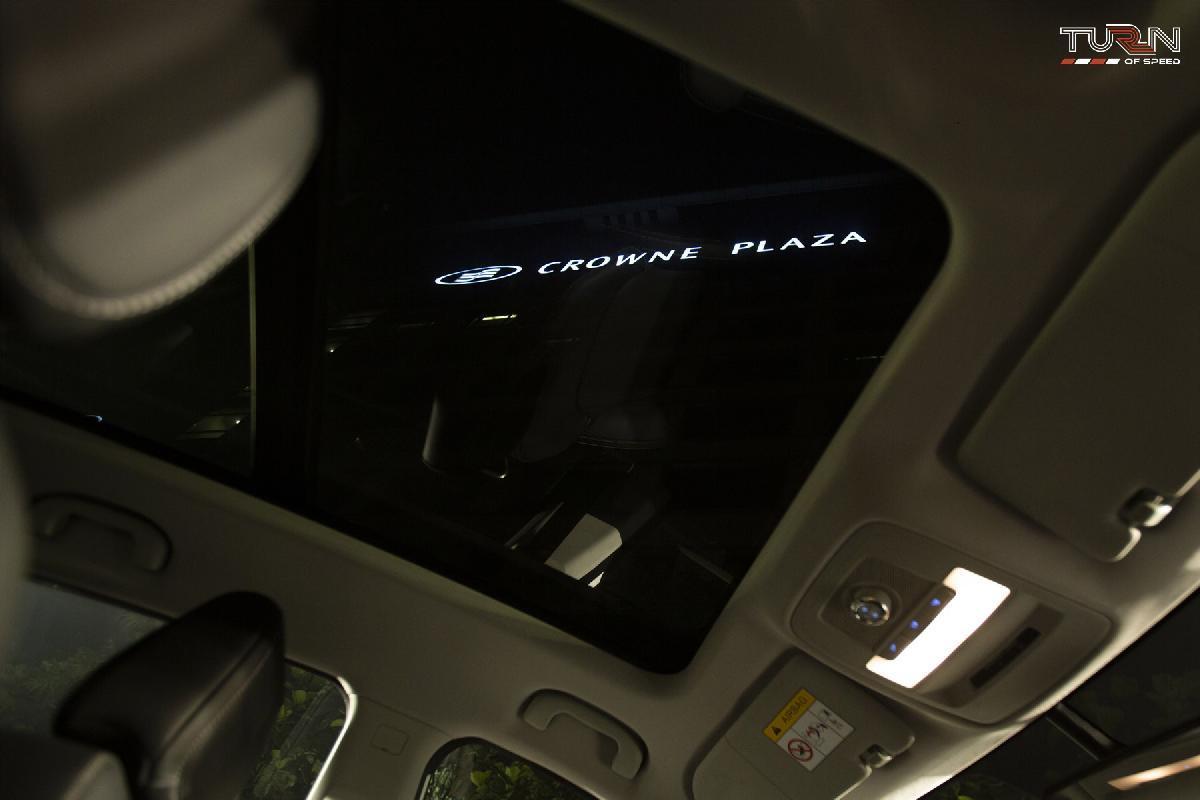 At first glance you will find that the ZS EV’s front grille has a resemblance to Mercedes – Benz’s diamond grille, seen on their A-Class. However, a closer look reveals that the two are rather different. For instance, the MG ZS EV does not have the chrome strip running through the middle like the Tristar’s grille does, nor does it have a chrome surround like the diamond grille does. 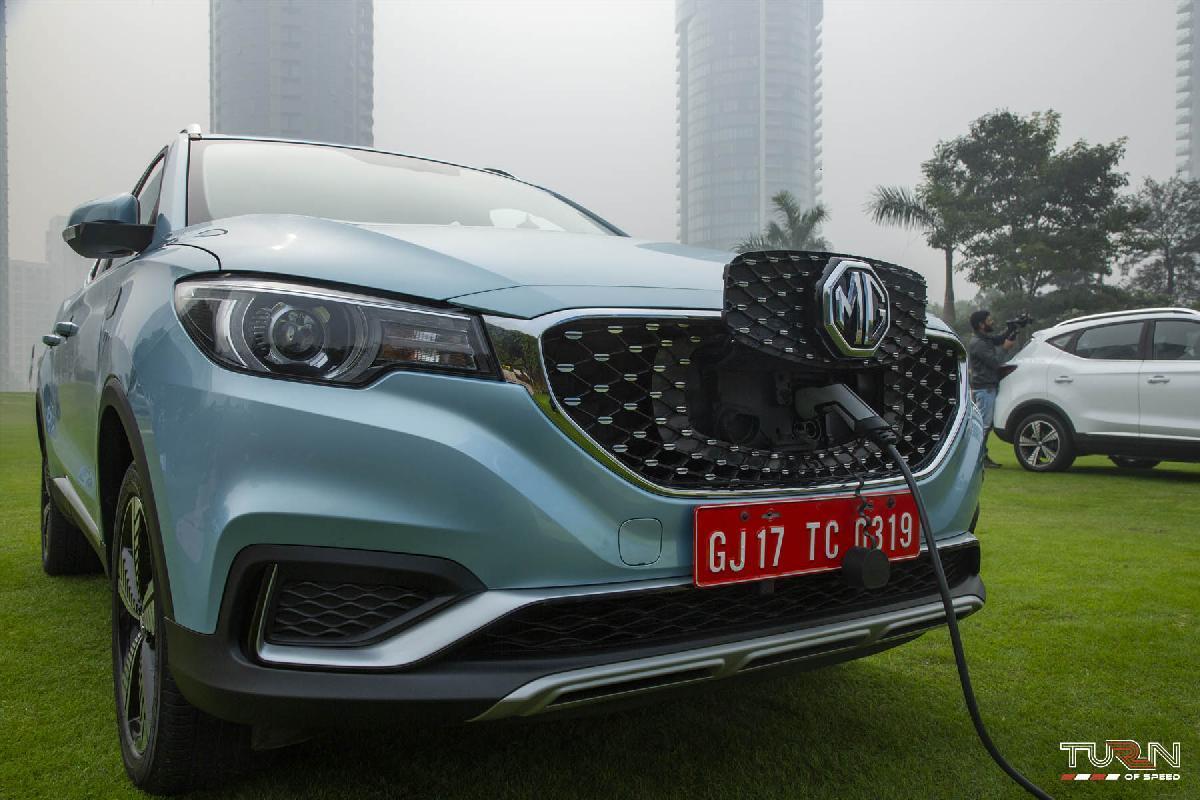 Evidently, a lot of work has gone into designing the MG ZS EV. Take the headlamps and the tail lamps of the MG ZS EV for instance, the projector headlamps and LED DRLs look stunning, and are in fact, inspired by the London Eye. The tail lamps also, draw inspiration from the Ursa Major Constellation, and make for a very pretty sight. Then, there is the wheel design – inspired by the windmills – therein, bringing in the environmentally friendly element to the EV. 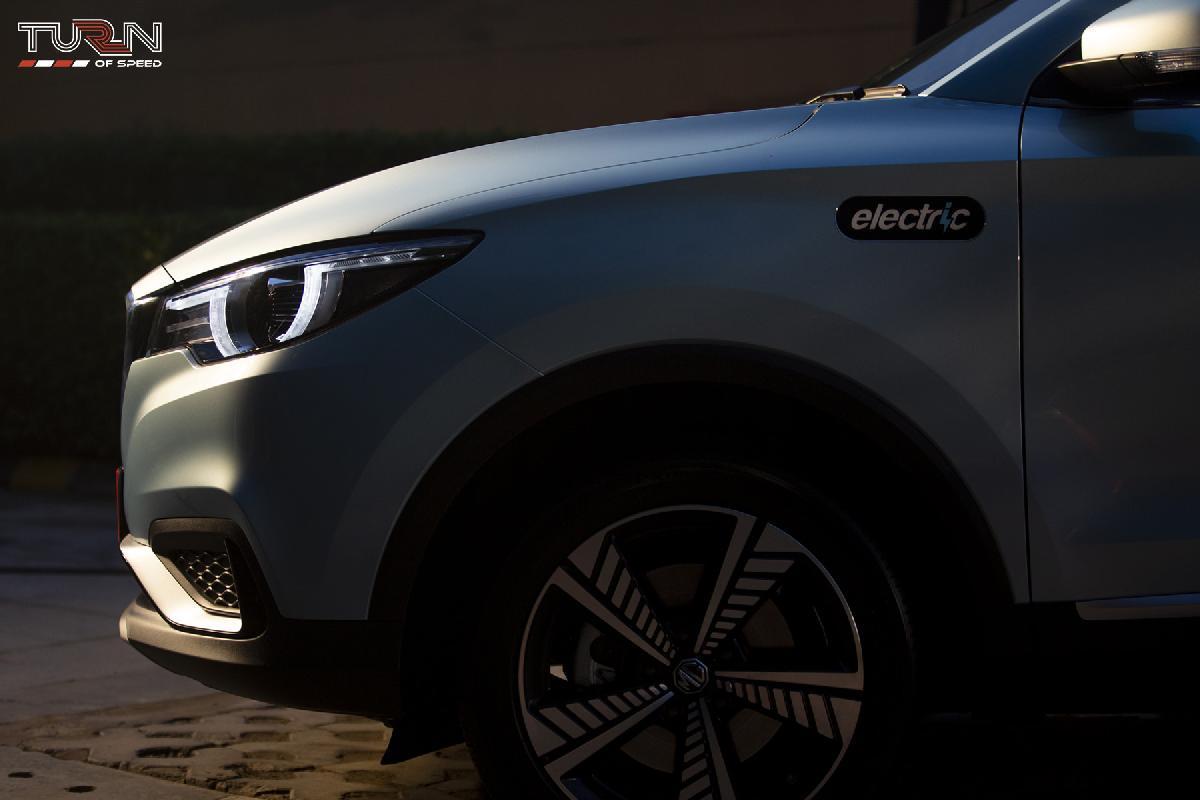 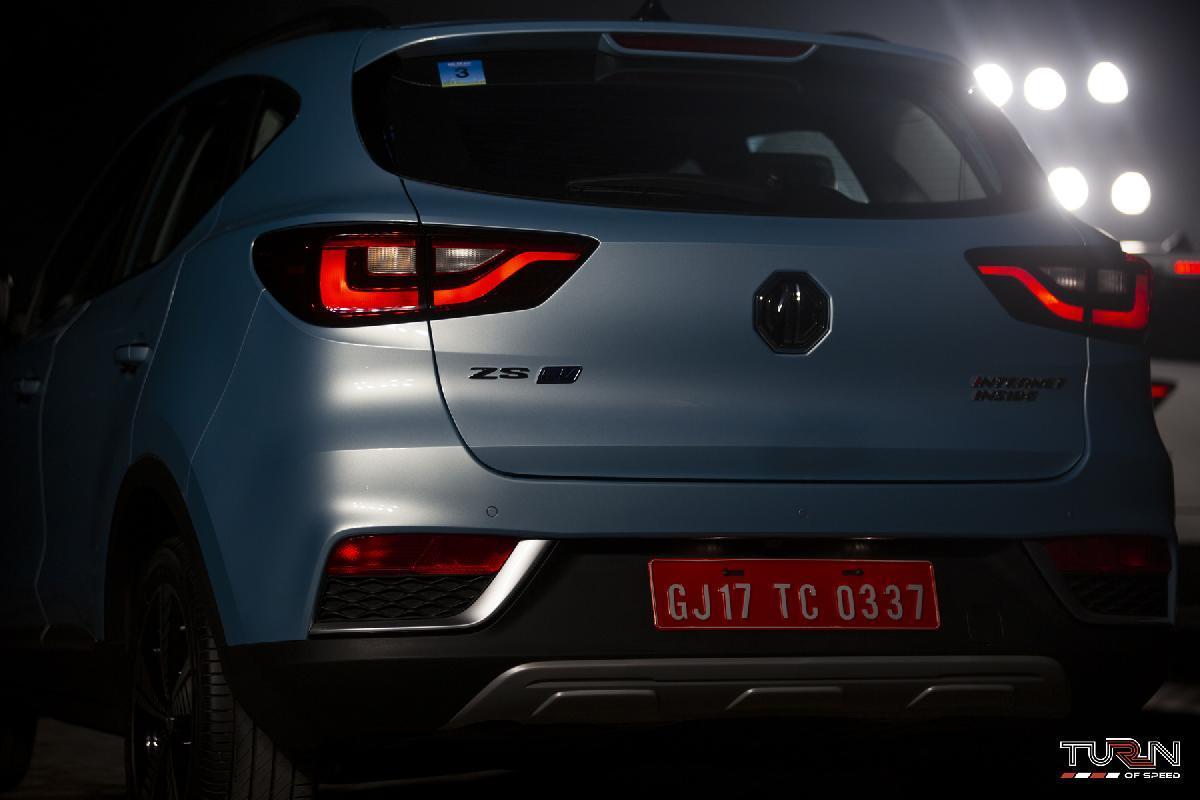 There are also other aesthetic elements to the car which elevate the ZS EV’s design to a whole different level.  The chrome window beltline, for instance, gives the ZS EV a really premium look, while the character line, on the side, which draws inspiration from a leopard’s jump, adds to the sporty character of the EV.

Furthermore, the ZS EV also comes loaded with quite a few upmarket features while ensuring it doesn’t overwhelm you with 3500 buttons and knobs. There are rain-sensing wipers, heated ORVMs (electronically foldable,) as well as a rear camera and sensors. The tailgate mechanism is easy to get used to and the ZS EV boasts a boot with a capacity of 470 liters.

The cabin of the MG ZS EV is a very comfortable one and everything on this EV has been very tastefully designed. 80 per cent of the interior is made up of soft touch materials. A beautiful leather wrapped steering, with some bits boasting perforated leather, that is squared off at the bottom, gives the EV’s cabin a luxurious feel. While the driver’s seat is a six-way powered seat, the front passenger seat is a four-way manual. There is enough head, leg and shoulder room for all occupants, both in the front and at the rear. The floor at the rear is flat and so five slim occupants or four healthy ones shouldn’t experience any discomfort while seated next to each other at all. 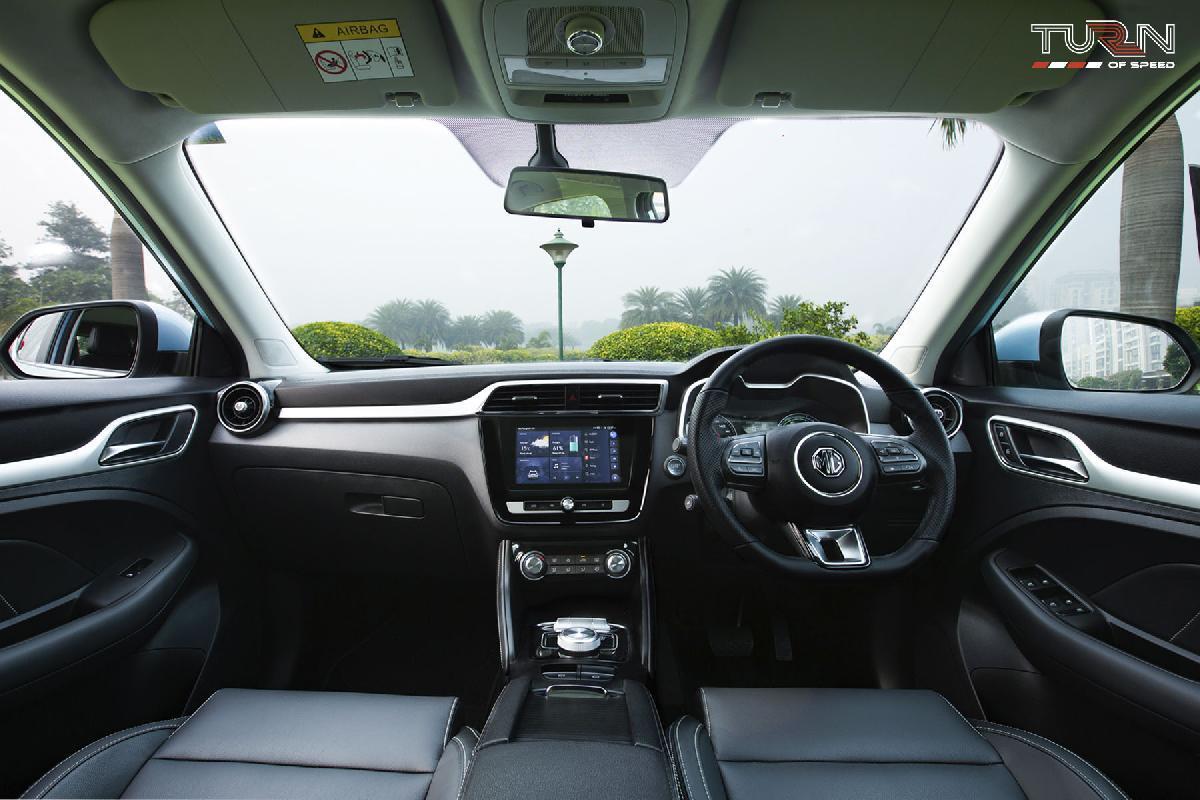 You may remember that when MG launched the Hector it came with a 10.4-inch display however, this time around the MG ZS EV gets an 8-inch display, which, in fact feels appropriately sized and proportionate to the size of the dashboard, and blends in beautifully with the design.

Being an Internet Car, the ZS EV also gets an integrated SIM. As an additional functionality, also provided, is the hotspot connectivity feature, which means you can use your cell phone’s internet in the head unit. In terms of hardware, this EV comes with 3GB RAM and 32 GB internal memory.

Furthermore, there are more EV specific features such as the i-SMART 2.0 technology and some EV specific voice commands and the new UIUX (User Interface and User Experience) – human and machine interface does makes tasks simpler so that you can concentrate on the road better. Once the charging display (which shows you the battery and the range) range drops to 50 kms, a spider diagram appears on the map which helps by giving you directions in which you can travel, based on the traffic, and it also gives you an option to locate the nearest charging station, if it is available. 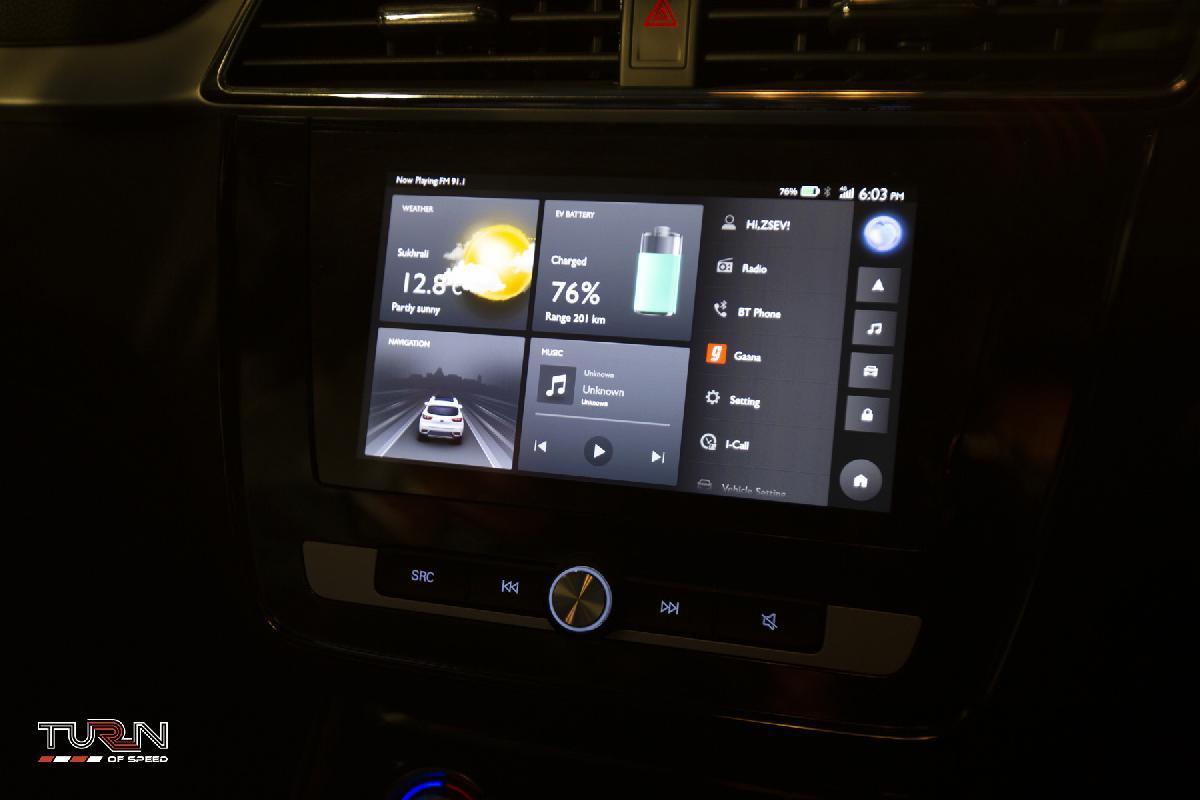 Navigation is via TomTom maps and Weather, is powered by Accuweather. Unlike in the MG Hector, where you can only see the weather of the current location, and where there is no provision for forecast either, in the ZS EV, you can get not just the weather of your current location but also get the forecast for the next few days for any city in India. There is also Gaana, and while you could only download ten songs, in the MG Hector, in the MG ZS EV, you can download 100 songs. Like the MG Hector, the ZS EV also gets pre-loaded entertainment content which is located in the local folder.

Below the speedo are located icons for 8volts and 12 volts, displaying the status of the normal battery in the car. On the right side, is the power usage and the battery status is at the bottom – Empty and Full of the main battery which is the 44.5 kW NMC (Nickel, Manganese, Cobalt) battery, which according to the MG Motor Experts is considered to be a more advanced battery system. (The NMC battery, following certain waterproofing and dustproofing standards, has been bolted to the underbody of the EV.) There is a graphical status, just like our cell phones, where you can also see the percentage of the main 44.5 kW battery left. Below it, is the range that tells you how many more kms you can travel. 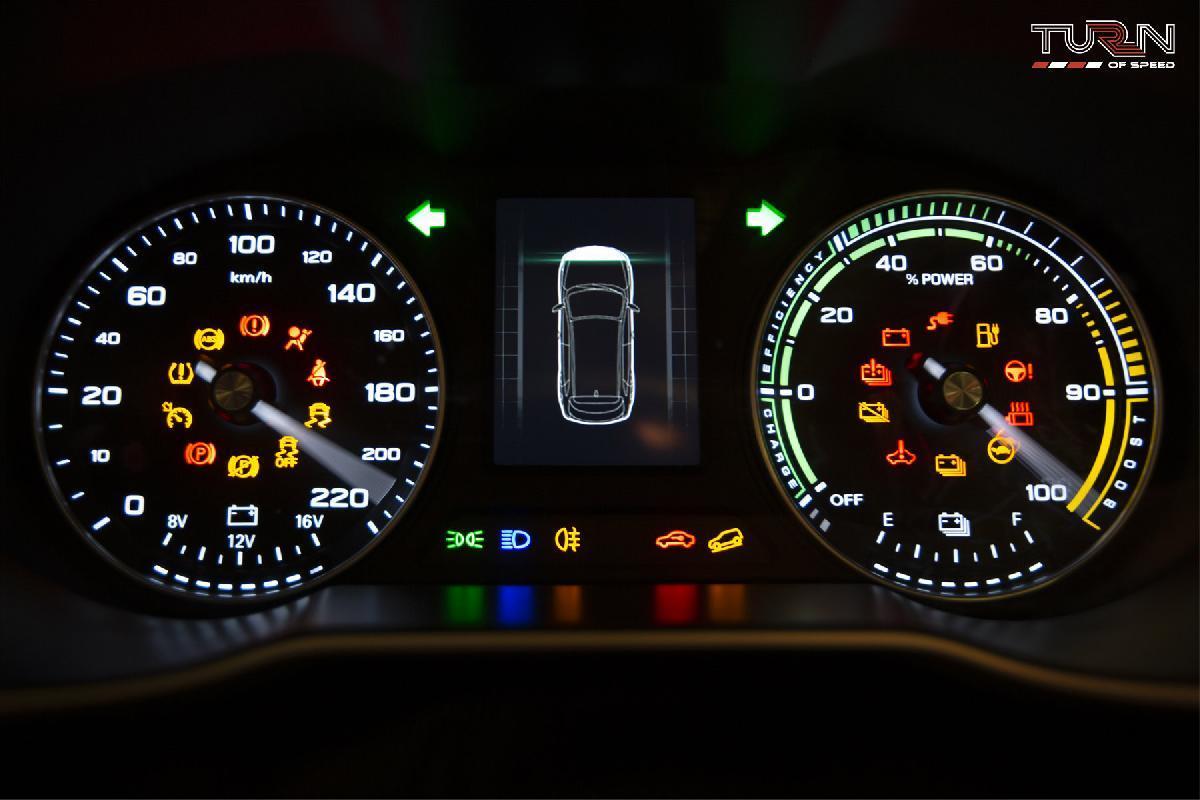 MG ZS EV claims a range of 340 kms according to ARAI figures, but a lot of that depends on how light footed you are and your driving style, based on that, you may be able to squeeze out a few more kms. The 44.5 kW battery is equivalent to 44.5 units of electricity and as explained by the Experts at MG Motor, in Gurgaon, if the unit rate of electricity is INR 6/unit, then it roughly amounts to INR 270, for driving a distance of 340 kms, which means it is less than INR 1 on the ZS EV, whereas on a petrol car, it is INR 7, and on a diesel car, it is roughly around INR 5. So, yes, what that means is that with the MG ZS EV, you will be laughing all the way to the bank.

We drove the MG ZS EV in Copenhagen Blue and driving it was a superlative experience. The EV offers great visibility and is also a great size to maneuver. The gear selectors Neutral, Drive and Reverse make driving this automatic EV a breeze. Everybody from 18-year-olds who have just received their Driving Licenses to women who grapple with stick-shifts to men who are fed up of the whole clutch-brake drill in never ending traffic are going to appreciate how simple the ZS EV is to drive and lest we forget, the interiors are such a beautiful place to be in.

We also tested the MID and drove it in all the three modes, Economy, Normal and Sports. The KERS (Kinetic Energy Recovery System) has three levels, the third being heavy, the second being moderate and first being light. What KERS does is, it extracts energy from the systems and charges the battery. The third extracts most of the energy and charges, thereby increasing your range, whereas the first extracts the lowest amount of energy and charges the battery. The MID also displays how much power you are extracting form the battery based on your driving skills which goes on to impact your range. 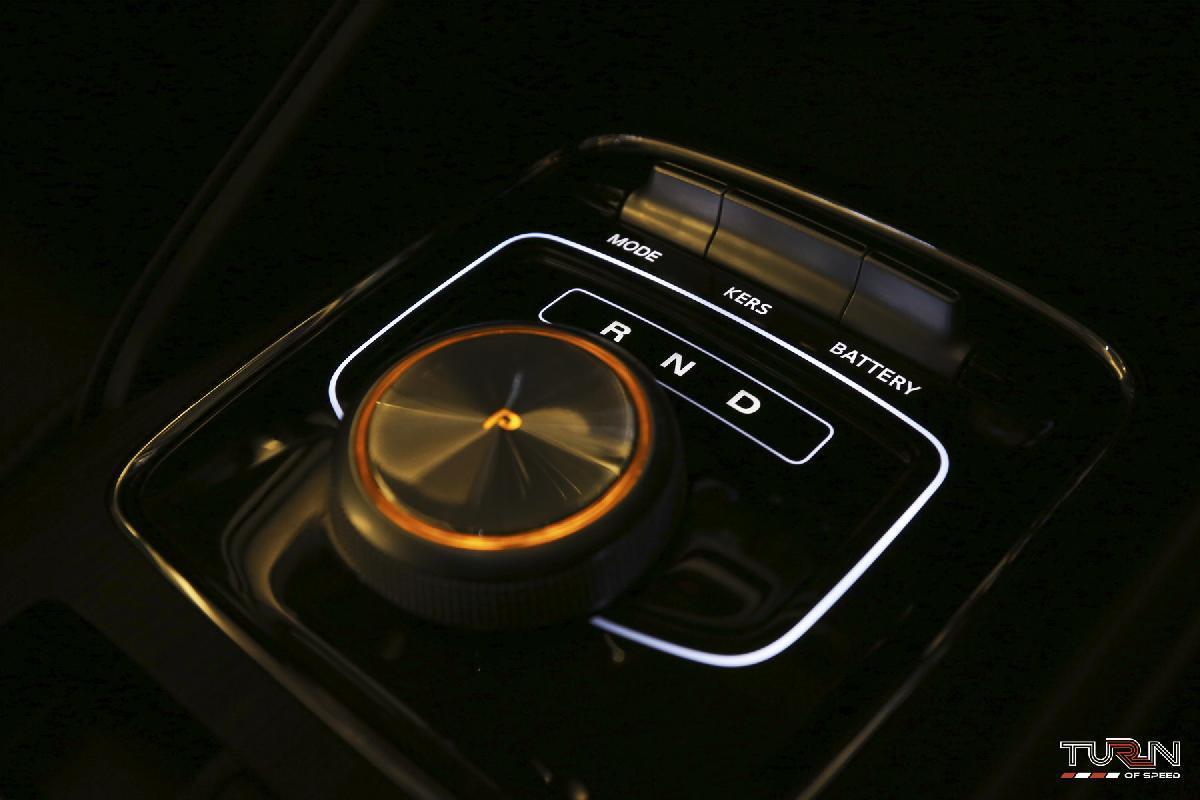 To engage the Electronic Parking Brake (EPB), all I had to do was simply press at the center. I could also do that by pressing the black brake switch. For disengagement all I did was release the black switch. Besides, the ZS EV also has the auto hold feature, which once activated, whether you’re on a downhill or on an uphill road, your EV will be held in that position until you decide to use the accelerator. At no point in time did I find this EV gasping for breath, smooth power delivery at all times just had me grinning from ear to ear. As I accelerated, the experience was nothing short of heady, unlike the ICE cars that I drive daily, this one was absolutely noise-free and that’s what is actually the first thing that will go on to draw many to EVs. Sure, we petrolheads do love the growl of the ICE engines but the noiseless EVs are something else altogether. The ZS EV felt supremely well-planted and at no point in time did I feel jittery about losing control. There wasn’t the slightest body roll either despite some crazy high speeds. I felt in control at all times and that’s really saying a lot about the MG ZS EV.

Now, to answer the question that you are here for. What are the ways in which you can charge the MG ZS EV? The DC fast charger which is the 50-kW charger can charge your EV’s battery from 0-80% in 40-50 minutes depending on the ambient temperature and other parameters as well. The maximum time, we’re told is 50 minutes but this is mainly for commercial use because you cannot have such a big electric load at home. If you have an industrial premise, maybe, this could be an option for you. Then there is the AC fast charger which is the 7.4 kW charger and which takes you around 6-8 hours to charge your ZS EV. For the AC fast charger’s installation, you do not need to pay any extra money, MG, has tied up with E-Charge Bay who will do the site survey, the civil work, and all the electrical work. If there is no spare load available then then you will have to approach the Government department of the State Electricity Board to get the additional load approval. Besides this, there is also an onboard charger, a cable charger, (located in the boot,) which is a 13-amp charger and which can be plugged into any 15-amp socket, anywhere in the country, which takes around 16-18 hours to charge. All of this, except the DC fast charger, are bundled together when you buy your ZS EV, and frankly speaking, it indeed is really the most uncomplicated new technology to own and enjoy. 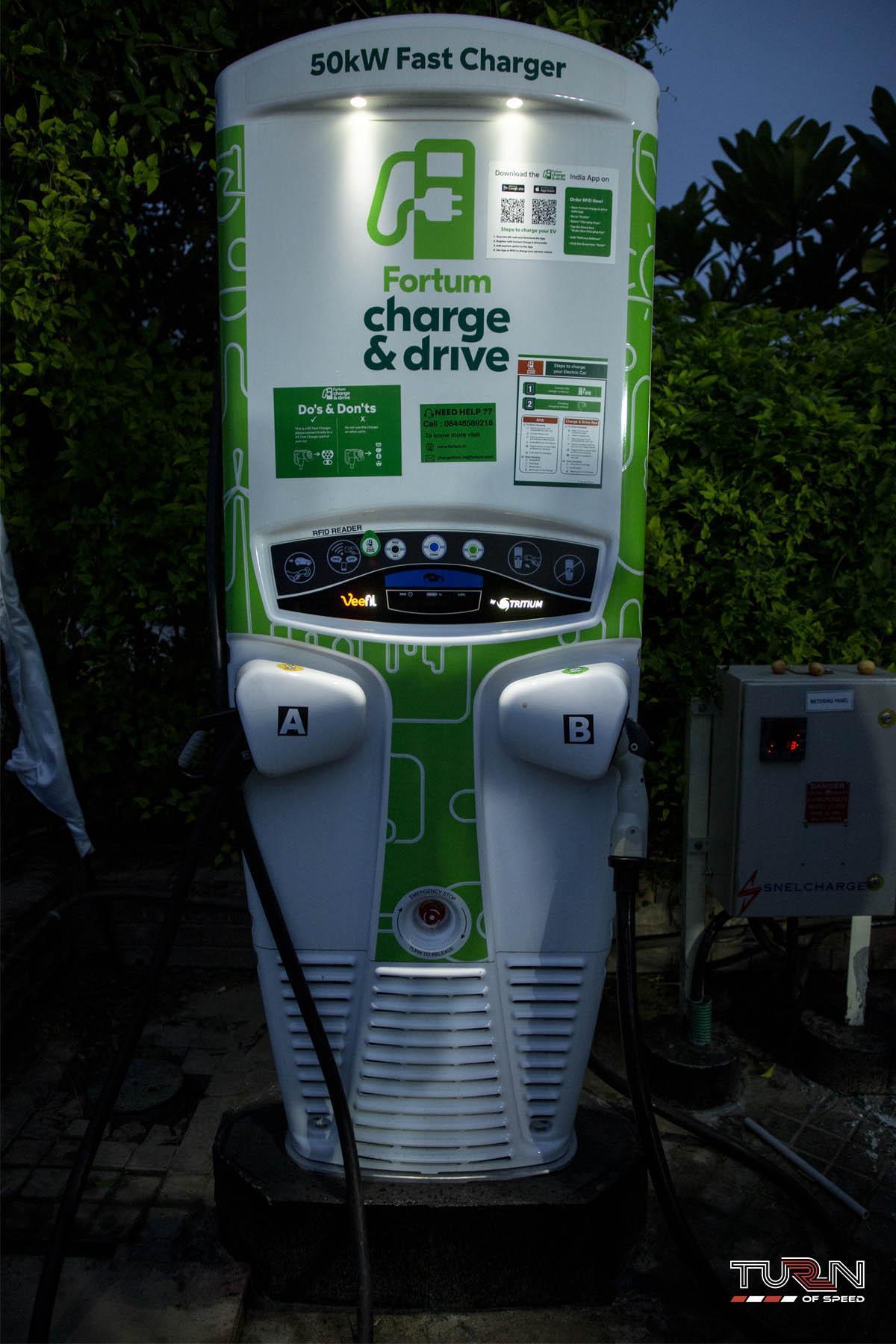 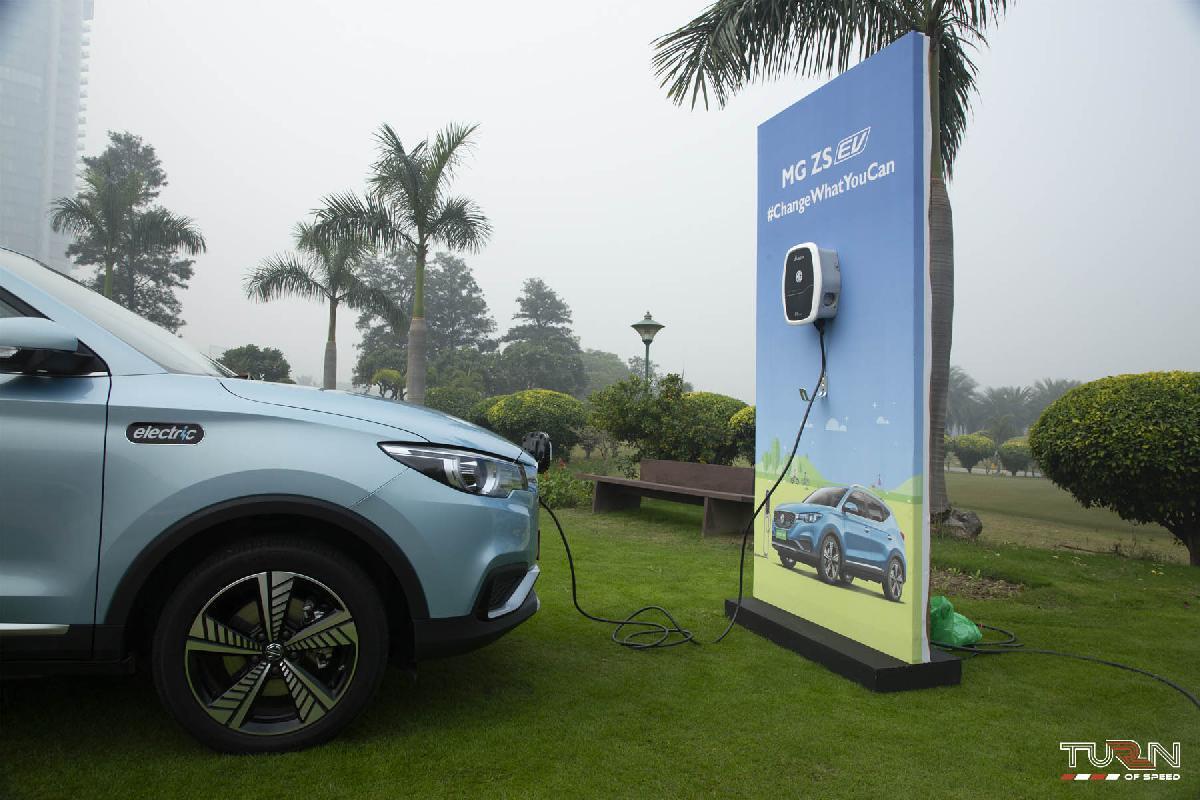 Would I buy the MG ZS EV? I definitely would, and that too in a heartbeat! Beautiful design, luxurious interiors, a huge skyroof, make this Internet EV with an integrated SIM, which is also so light on the pocket, a compelling choice. Not to mention, it’s Five Star Euro NCAP rating, and the five-year unlimited kms warranty! All these factors go a long way in sweetening the deal further. The price of the MG ZS EV will be announced at its launch early next year, and we are expecting it to be really competitively priced. However, bookings at INR 50,000, have just begun in select cities. What are you waiting for?