The rise of electric mobility

The last few years have seen a surge of e-scooters. From start-up companies to established manufacturers, everyone wants to be a part of this eco-friendly bandwagon. We take a closer look at what’s the latest in the electric space.

E-Scooters have come a long way. Once considered more of an eco-friendly concept than a practical option India now has several start-up companies who are trying to carve a niche for themselves. As a matter of fact, even major two-wheeler manufacturers are now wanting a slice of this pie. The demand for ‘high speed’ e-scooters has seen a steady rise in the last few years. The last financial year alone saw a sale of more than 24,000 e-scooters in India. High-speed e-scooters are those two-wheelers that have a top speed of over 25kmph. With companies such as Okinawa, Hero Electric and Ather Energy dominating this space, 2020 saw Bajaj and TVS joining this electric bandwagon as well.

Here’s a look at what’s new in the e-scooter market:

At the beginning of the year, Bajaj re-launched the iconic Chetak, but in an all-electric avatar. Gone are the days when the two-stroke Chetak used to be the heartbeat of every middle-class family. In terms of design, the new Chetak is rather swanky looking and it competes shoulder-to-shoulder with Vespa’s gorgeous designs. The scooter sports all-LED lights, for the headlamp, the tail light, and the turn indicators. The LCD instrument cluster is a black-and-white one.

The e-scooter also comes with a dedicated app, My Chetak, which offers additional features such as battery charging status, location of the two-wheeler, trip history information, emergency contact etc.

The Chetak’s motor churns out 3.8kW (5.0 bhp) / 4.1kW (5.4bhp) (continuous/peak power) and 16Nm of torque. These figures may sound quite modest, but one has to keep in mind, unlike petrol-powered scooters, these electric two-wheelers offer instant throttle response as there is no power lag. So, the power delivery is literally from the word go. According to Bajaj, the 3.0kWh lithium-ion battery pack offers a range of 95kms in Eco mode and 85kms in Sport.

It takes the Chetak’s battery 5 hours to be fully charged. Even though it doesn’t offer a fast charging option, 80% of the battery can be charged within 3.5 hours and 25% in an hour. The Chetak is available in two variants — Urban and Premium. The latter trim comes with front disc brake. The former costs INR 1 Lakh, while the latter is INR 1.15 Lakh, ex-showroom. Currently, the Chetak is only available in Bengaluru and Pune. 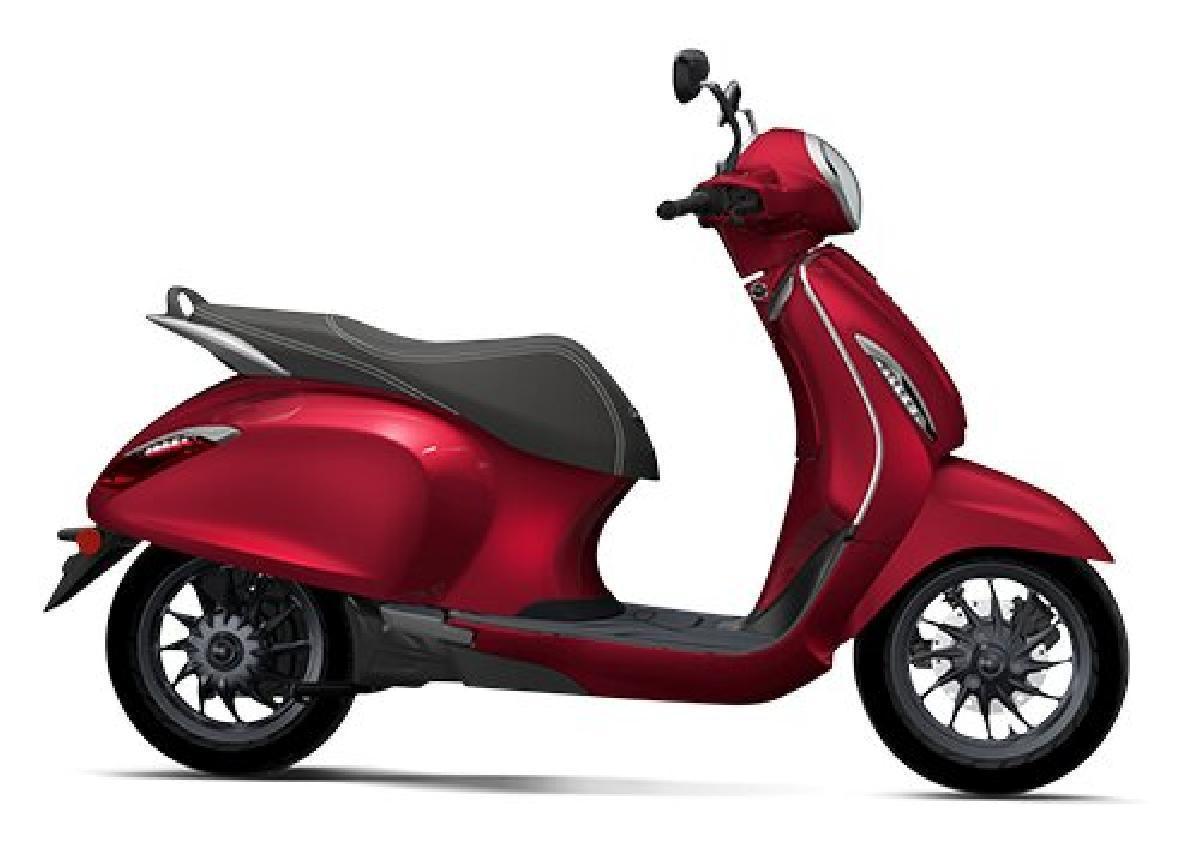 TVS is another major manufacturer which decided to throw its hat into the ring. They launched the iQube e-scooter at INR 1.15 Lakh, on-road Bengaluru. TVS has gone with a more traditional scooter design with all LED lamps. It gets an illuminated Electric badge on the left side as well as a 5-inch TFT colour instrument console.

The iQube’s motor has a peak power output of 4.4kW (5.9bhp) and the company claims a top speed of 78kmph. It can do 0-40kmph in 4.2 seconds. The TVS e-scooter gets three 750Wh lithium-ion batteries — two below the seat and one under the floorboard, ensuring a more balanced weight distribution. It comes in two riding modes — Eco and Power. The former mode returns a range of 75kms and the latter 55kms. With a 230V, 10A charging socket, the iQube can be charged fully charged in 5 hours and around 80% in 4 hours. Like the Bajaj Chetak, the iQube too doesn’t get a fast-charging option. The only catch is that the iQube is only available in Bengaluru.

The iQube is equipped with smart connectivity, SmartXonnect, and via TVS iQube app which offers more than 50 features such as navigation, incoming and SMS alerts, location of charging stations, battery’s status etc. 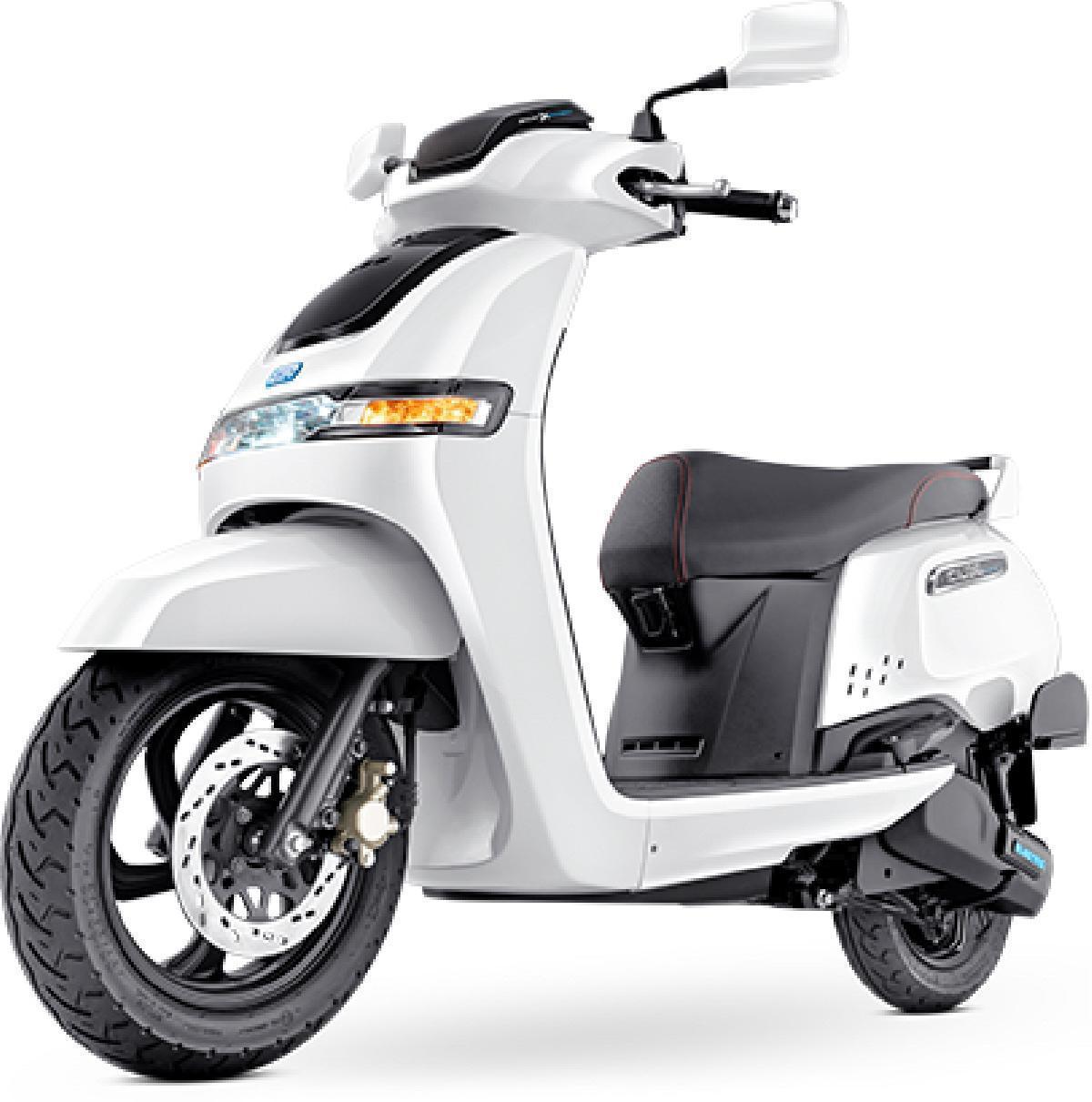 Ather Energy burst onto the scene in 2018 with the launch of the 450. Two years later, they’ve introduced a more powerful and a lighter 450X, which is currently the most powerful e-scooter. It boasts of an impressive peak power of 6kW (8bhp) and 26Nm of torque. According to Ather, the 450X can do 0-60kmph in 6.5 seconds and has a top speed of 80km/h. The weight distribution of the scooter is spot on 49:51 thanks the battery under the foot floor and the motor placed at the rear. The 450X has lost some of its weight issues due to a lighter new instrument console and Ather has also removed the on-board charger.

The 450X is packed with features such as a 7-inch touchscreen dashboard, which is based on Android operating system and is powered by 1.3 GHz Snapdragon processor. It also comes with a ‘Dark Mode’ option. Via the Ather app, you can receive incoming calls and switch music tunes. Connectivity is the key and all this is possible thanks to the 4G eSIM from Jio, which also offers navigation and Over The Air (OTA) updates.

The entire battery can be fully charged within 5 hours and 45 minutes, but the Ather e-scooter also offers a fast-charging option — 1.45km in a minute i.e. roughly 15kms in 10 minutes.

The 450X is available in two variants — the Plus at INR 1.49 Lakh and the Pro for INR 1.59 Lakh. If you think that pricing is on the steeper side then you can opt for a monthly subscription plan, something similar to a mobile phone with a down payment of INR 99,000 (ex-showroom Bengaluru). The 450X is available in two plans — Pro package, which costs INR 1,999 monthly or the Plus plan for INR 1,699. The Plus offers a battery range of 85kms in Eco mode, a higher power output of 6kW and fast charging option. The Plus package, on the other hand, offers a range of 75kms, the power comes down to 5.4kW and the battery capacity dips from 2.7kWh to 2.4kWh. If you opt for the variants without the subscription plans then you lose out on OTA updates, access to free fast-charging, and an unlimited battery warranty, which is limited to 3 years without a plan. 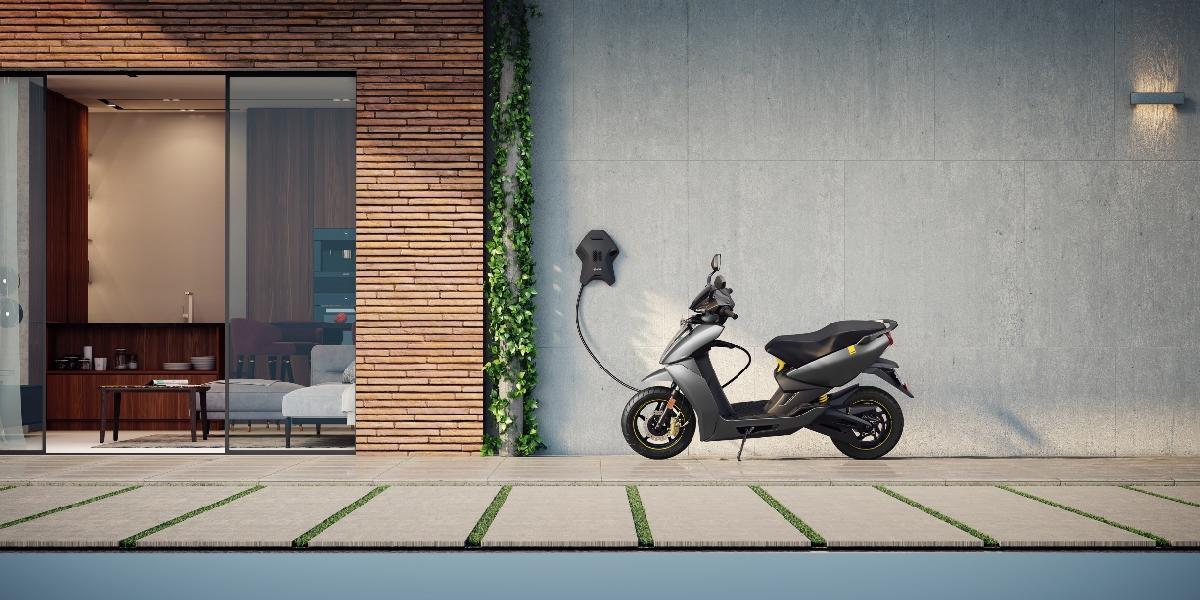 The latest company to enter this segment, it has launched two e-scooters —A2 and B8. The A2 is a low-speed scooter and is available in two trims — lead-acid at INR 52,499 while the lithium-ion is for INR 67,999. The main difference between the two is that the lead-acid battery takes 5-6 hours to be 80% charged and 7-8 hours to fully charged, while the lithium-ion one needs only 2 hours and 15 minutes to be 100% charged. Also, the latter is a removable battery. Apart from this, both variants have the same top speed of 25kmph and the company claims that both the trims offer a range of 100kms. The A2 is powered by a 25OW brushless DC (BLDC) motor.

The B8, on the other hand, is a high-speed scooter and is available in three versions — lead-acid, lithium-ion, and LI Technology and are priced at INR 62,999, INR 82,999 and INR 88,999 respectively. It takes the lead-acid 7-8 hours to be fully charged and offers a range of 78kms while the other two take only 3 hours to be 100% charged and offer a range of 70kms. All three are powered by Bosch’s 1.9kW motor and claim a top speed of 50kmph. 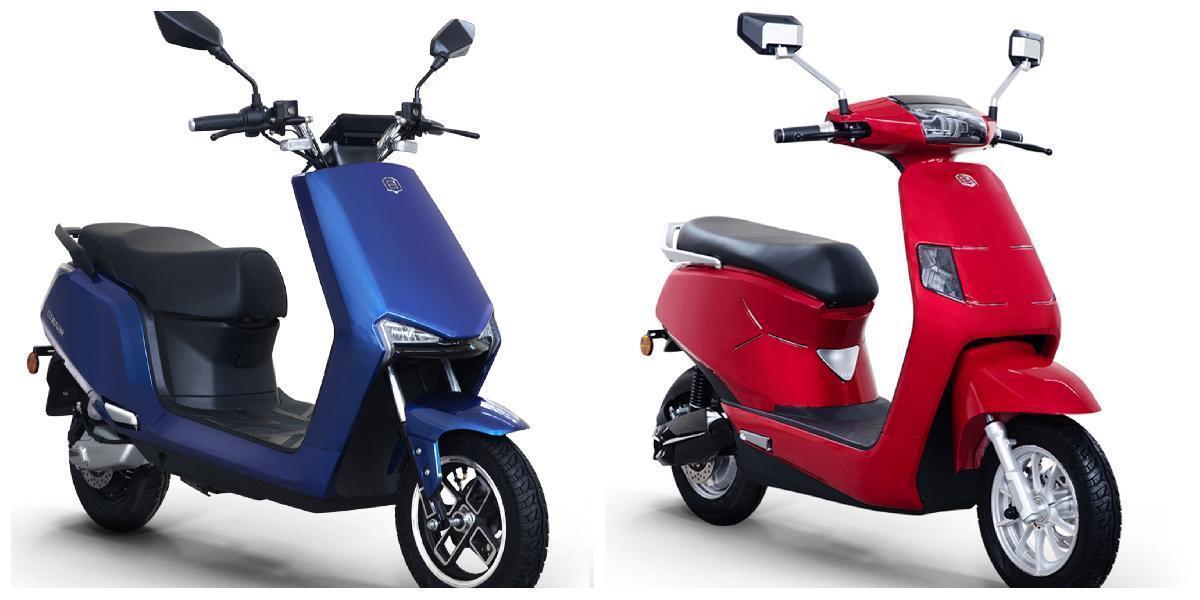 Batt:RE is a start-up company and has recently launched its latest e-scooter, the IOT. It is priced at INR 79,999 and can be bought from either the showrooms or from Amazon at no additional delivery fee. It gets a 30 Ah Lithium Ferro Phosphate battery and returns a range of 85kms. The battery is fully charged in two and a half hours. The e-scooter can be paired to your phone via its app which also gives you details of the vehicle and the battery status. It also offers turn by turn navigation assistance, call alerts, service information, OTA updates on its digital LCD instrument cluster. For the first year, the subscription for all these features are free, but from second year onwards a fee of INR 1,500 will be charged. 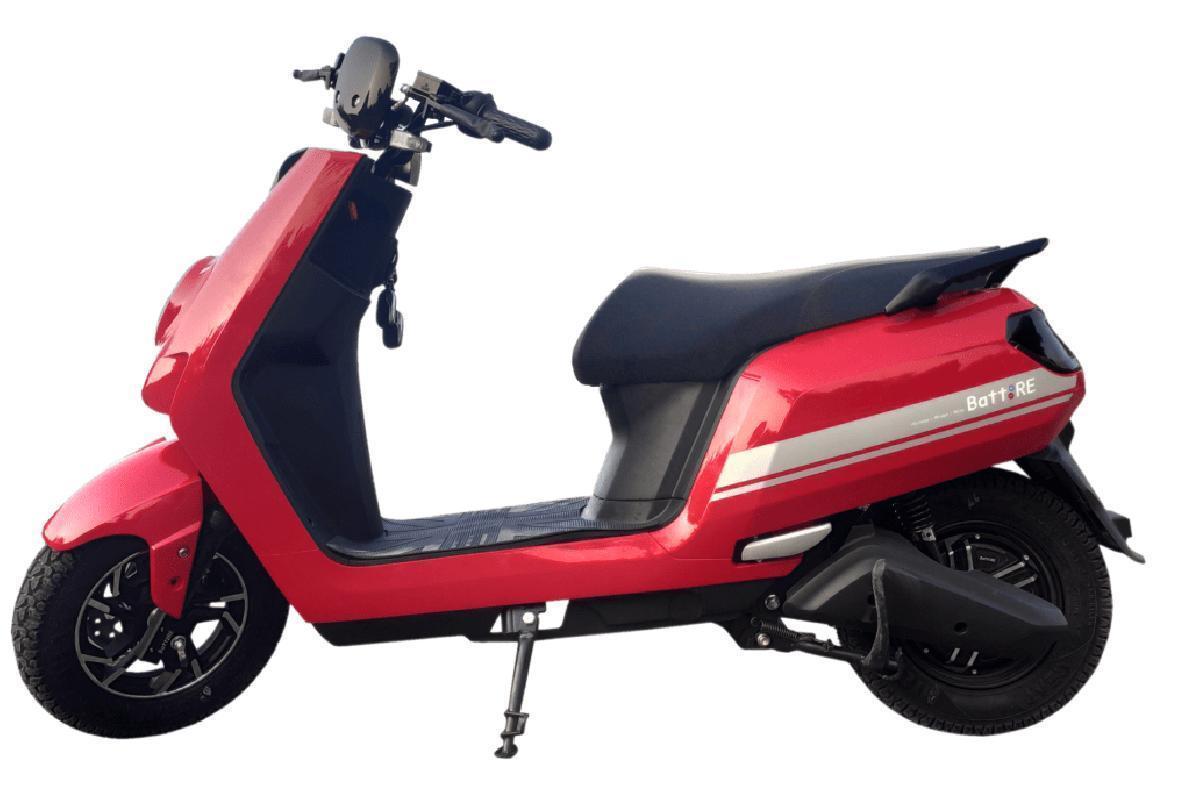