Tarun Mehta and Swapnil Jain give us the first glimpse into Ather Energy’s mega-factory in Hosur, Tamil Nadu. The ‘power’ ful winds of change have begun to blow.

At Ather Energy’s 123,000 sq, ft manufacturing facility in Hosur, Tamil Nadu, where 90% production is localized, and where 110,000 scooters and 120,000 battery packs, with an investment of 635 Cr, will be built annually, things are shaping up beautifully. This is where two young turks are paving the way for a big change – for a cleaner and greener India as Indians gear up to leave behind their petrol and diesel vehicles and embrace Electric. 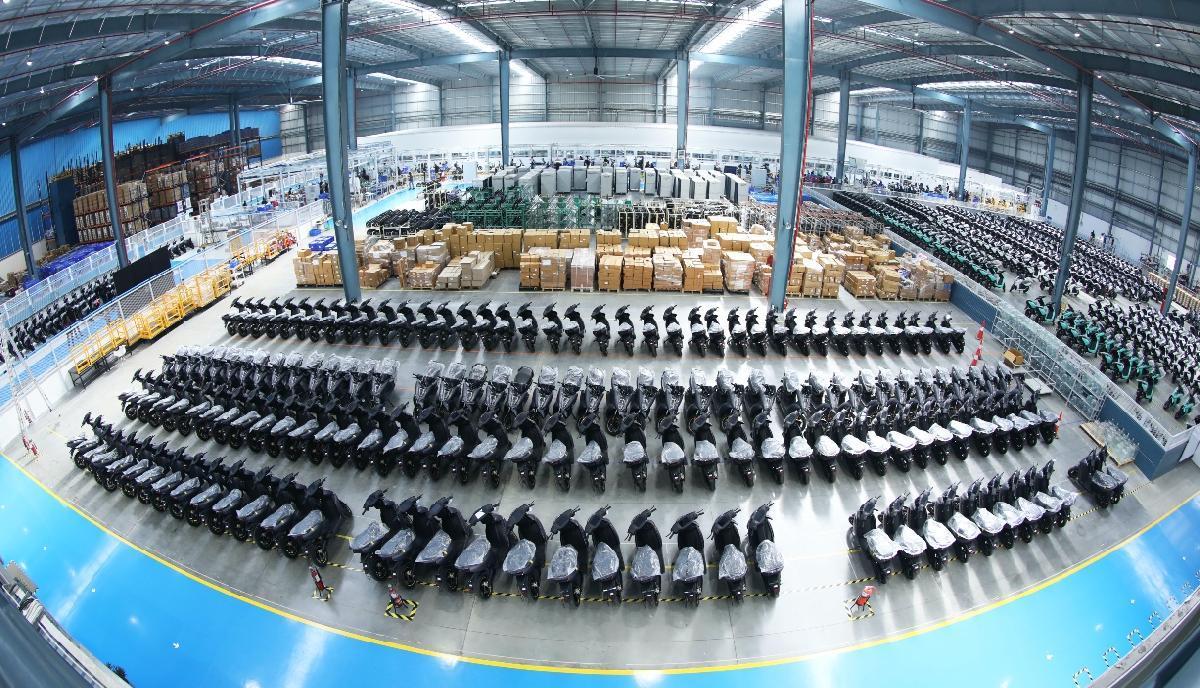 Founders, Tarun Mehta and Swapnil Jain, IIT Madras alumni, who founded Ather Energy in 2013, were very clear about not building an EV that would be a “poor replacement of petrol vehicles.” “We wanted to build the best scooter in the market but didn’t just want to buy and integrate components,” says Mehta. That is evident in the way how almost everything has been designed and built in-house, including the assembly line at the plant which boasts 37 stations, where 70 workers build an Ather scooter in four minutes flat! Both, the Ather 450X and the Ather 450 Plus are completely ‘Made in India’ products. “We celebrate the cast aluminum frame, we celebrate the dash,” says Mehta, and why not. Afterall, they designed and built a scooter that boasts faster charging capabilities than even an iPhone. 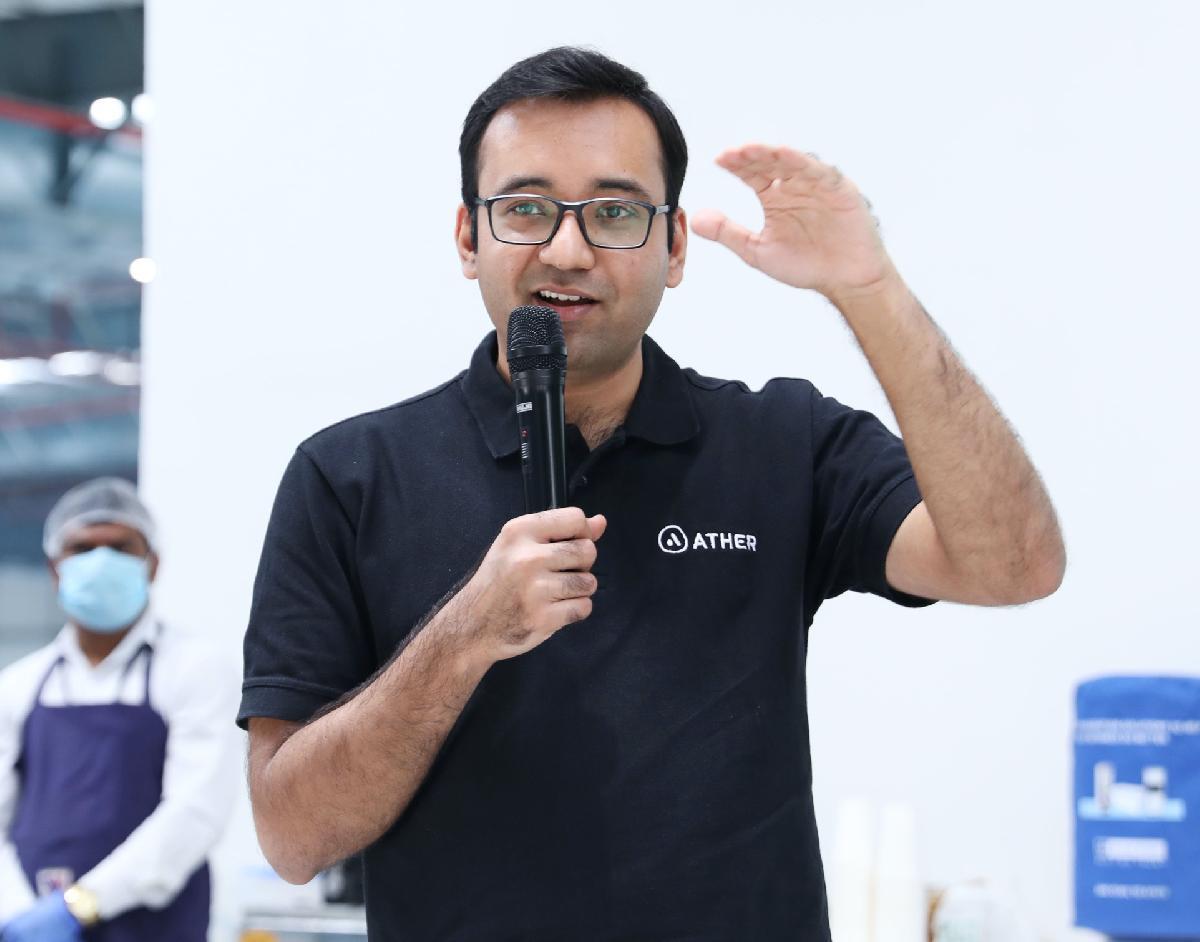 Even their battery line has been designed in-house with a huge level of automation making Ather Energy, the only EV OEM in India to produce their own battery packs. “We have a floor-mounted conveyor for our scooters,” (Battery packs are bolted to the floor of their scooters),” says Jain, emphasizing the importance of energy density for their battery packs. “Energy and density are very important for our battery pack. The type of cells [used] changed and using a process that allowed us to scale up, we redesigned our battery for performance and speed,” says Jain. 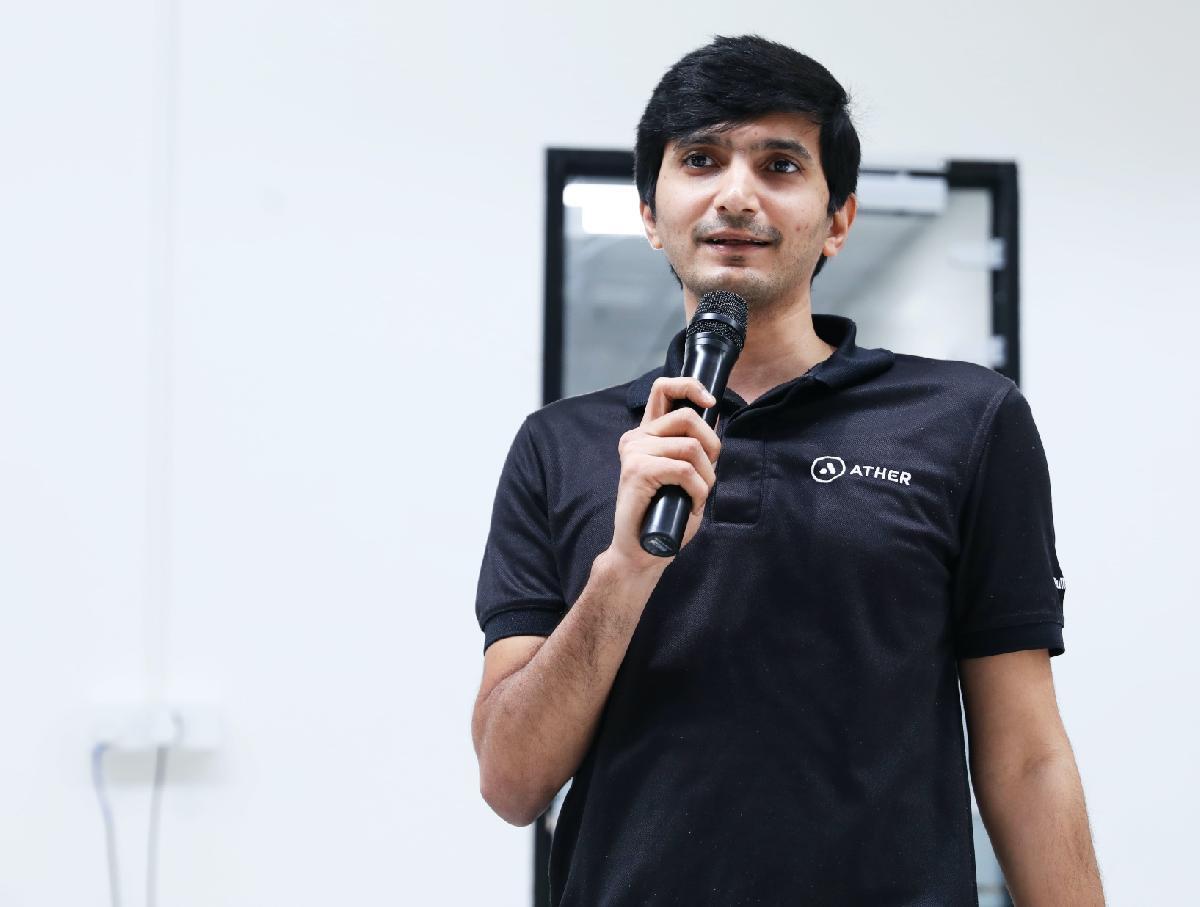 However, all of this has been work in progress. Jain talks about how their first scooter took nine days to make. From 2019, when they made 750 scooters/month to 2020 when they went on to make 1750/month. Now, at the mega-factory, which was built during the pandemic, in nine months, it has been designed to make a whopping 9200 scooters/month. “We went from being a 14-station vehicle line to a 37-station vehicle line,” says Jain. 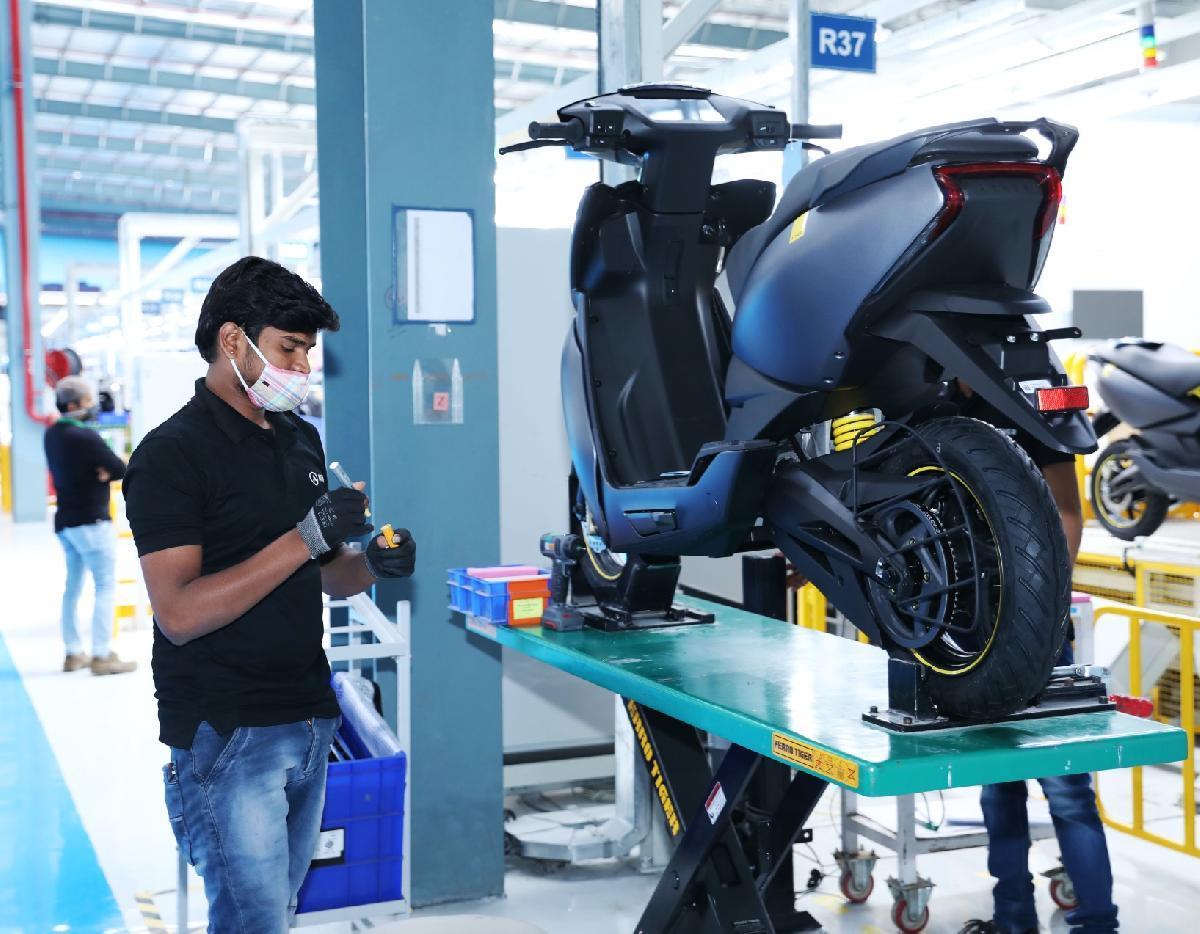 Tamil Nadu government has extended support to the Ather factory under its EV policy and both scooter manufacturing as well as Lithium-ion battery manufacturing are expected to create job opportunities in the area. As a part of this initiative, 4000 plus employees will be trained with requisite skills in the EV sector in the next five years. At present, the average age of workers is around 27-28 years at the factory while the aim is to achieve a 50:50 men women ratio in their work force. 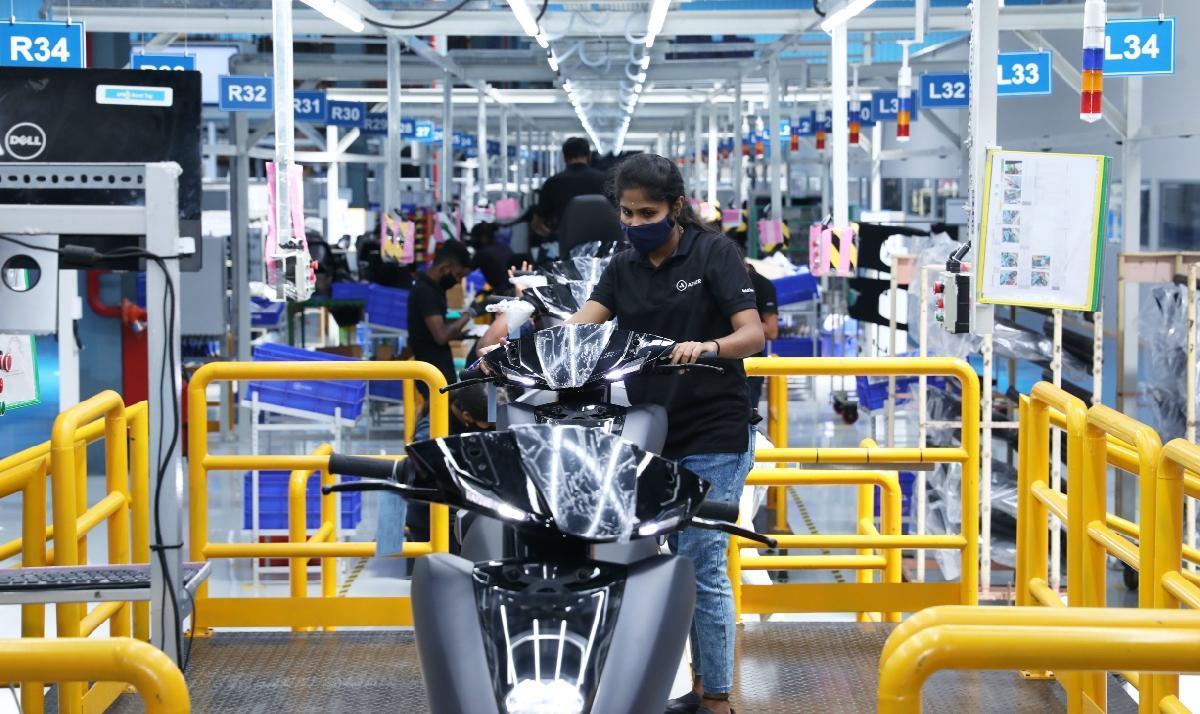 While thanking the Tamil Nadu government, Mehta also acknowledges that Karnataka government was amongst the first to waive off road taxes. “We are thankful to the Tamil Nadu government and their EV policies which have allowed us to have most of our supplier base in the State making us self-reliant,” says Mehta. “Karnataka Govt was one of the earliest ones to do that. That has helped a lot. Now, other states have caught up,” he says Mehta.

Asked about what he’d like Karnataka government to further do, Mehta says, “given the amount of EV interest in Karnataka and in Bangalore, which is pretty much the hub for all EV companies in the country today, with companies such as Ather, OLA, Mahindra and atleast 50 others, Karnataka should take lead.” Karnataka could easily be pulling in so many global suppliers today. The suppliers want to be close to OEMs and OEMs are sitting in Bangalore. Suppliers would love to be there. I also think given the strong pace at which EV purchases are shooting up in Karnataka, government should take a lead in enabling more charging, specifically home charging, because that is a key requirement for a two-wheeler purchase. There are some guidelines, but they’re not laws, they’re not clear enough, but I think the government can take a lead there and teach other states how to enable home charging better,” he says. 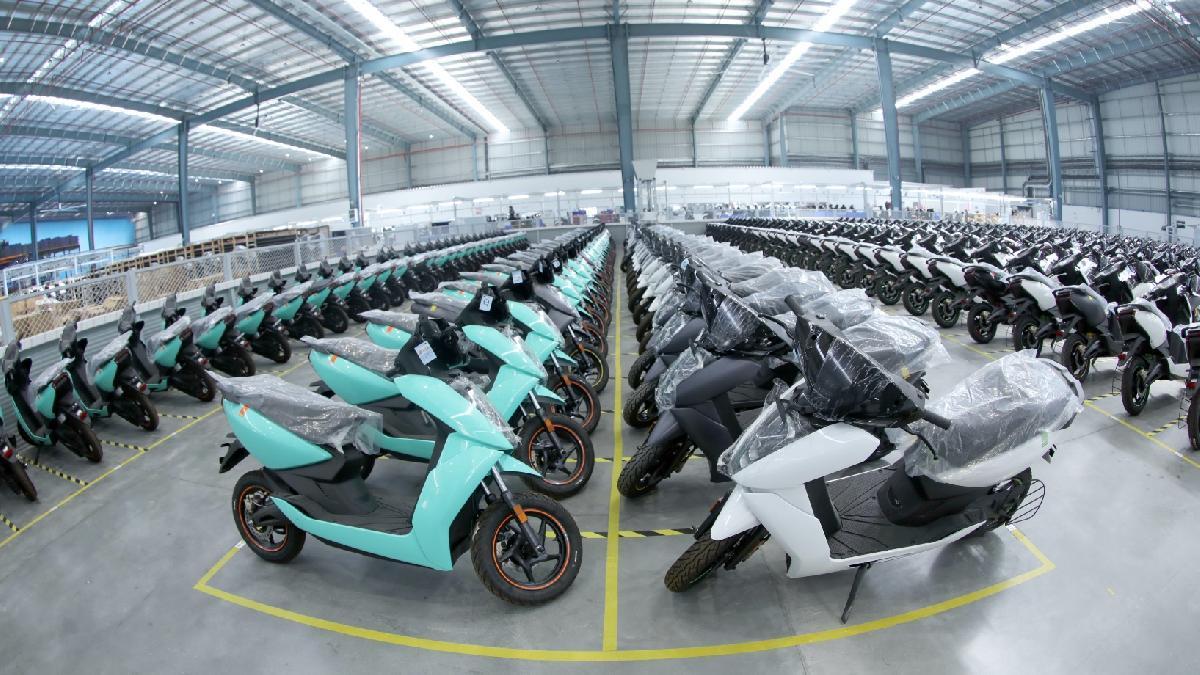 This connected vehicle factory uses advanced solutions and by integrating technology, human assets, existing systems and several processes, it is using the tons of assimilated data from machines as well as from people to further better their offerings and improve the lives of people. Not to mention, the zero-effluent generated from the Ather energy mega factory where E-waste is being handled by Authorized Recyclers. 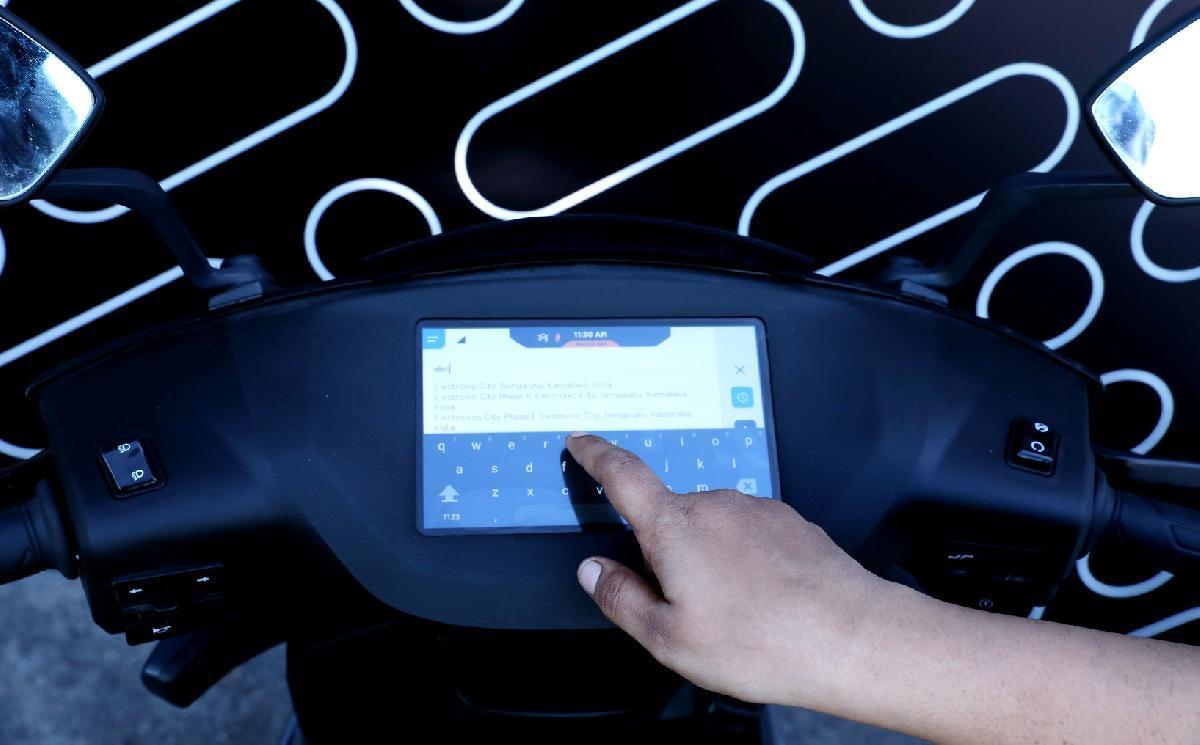 With backing from Sachin Bansal and Binny Bansal, Founders, Flipkart, Hero Motocorp and Tiger Global, Mehta and Jain, have a lot on their hands. From busying themselves with not just designing and building newer scooters but also installing public charging networks, in the form of 103 Ather Grids (Also designed and built in India), across 12 Indian cities to expanding their networks, all their energies are now being channeled towards changing the image of what Electric is all about so that more Indians jump onto the EV bandwagon, thereby, becoming early adopters.

Here’s wishing the duo and their team success and gigawatts of power!