Adult fans of LEGO® talk about their hobby-horse and how they're taking it a notch higher with their custom builds.

In Dindigul, a small town in Tamilnadu, Dr Vishnu Manohar, a gold medalist prosthetic dentist has been making news – not just for his practice, but for his quintessential Indian vehicles – MOCs (My Own Creation, in LEGO® parlance), like Bajaj RE Auto, Tata Motor Trucks, and Maruti Omni, all created using LEGO®. His tryst with the bricks began when he was seven, with a Technic model but his interest resurfaced when he used LEGO® for a unique denture impression technique on a patient with limited mouth opening. “LEGO® stores in India are limited to the Metros and the occasional gift from NRI relatives. The advent of smartphones had killed the hobby as people find screens to be better alternatives for keeping busy. It’s alarming. As an adult fan of Lego (AFOL), I thought of changing the narrative. The challenge lies in not following an instruction manual but in building something new. Technic elements are very handy and a certain inventory of parts can be reassembled in any way you can imagine - the possibilities are endless,” says Dr. Manohar. He found the website, www.rebrickable.com, which has an index of thousands of alternate builds to be made from whatever parts you have. Just list the sets you have and it will tell you how many more models you can build with it. 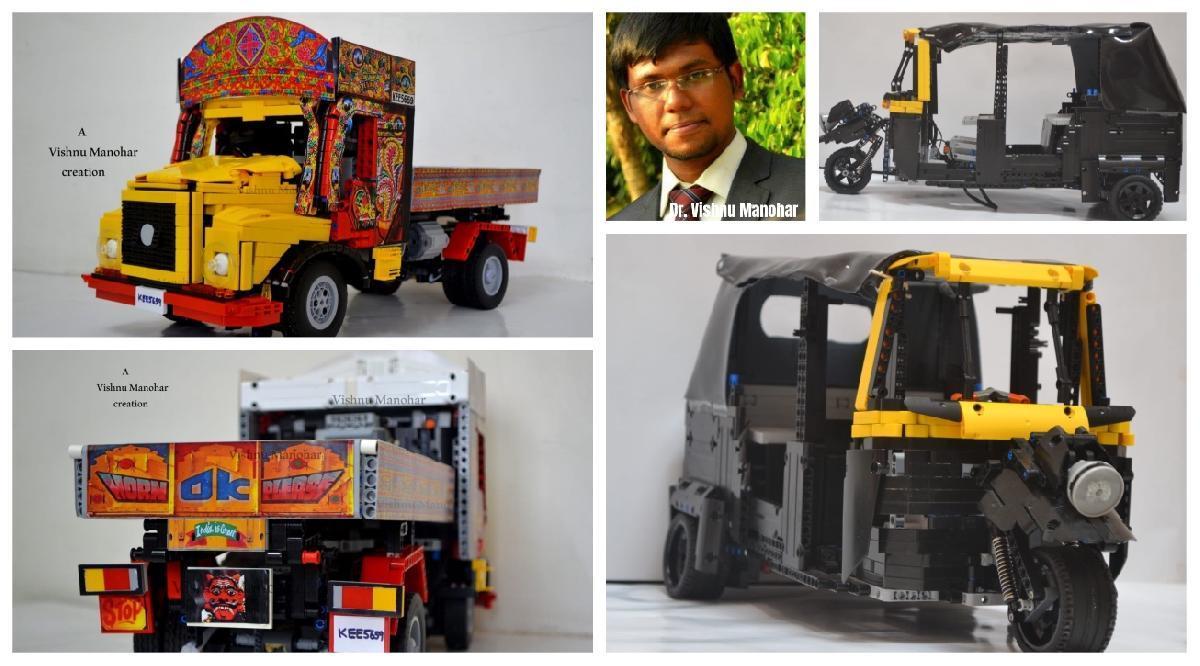 Since not many enthusiasts build LEGO® models, exclusive to India, Dr. Manohar took it upon himself to start building the quintessential Bajaj RE Auto. After almost two months of brainstorming and thirty times of building, failing, re-building, and gears backlashing, the remote-controlled auto rickshaw started rolling on its wheels. As the complex LEGO® Technic sets are all about pure engineering - it took him a hundred days to build something with no precedent in Tamil Nadu at least. He has published the design on his website as well.

This success drove him to build more. Next up was a Tata Motors Truck - fondly called the Lorry. “Once on a drive back home, the vivid colors, vibrant shades and the classic effigy of Drishti Bommai as they call the T logo, was staring me in the eye, urging me to create. I began researching the design the same day,” says Dr. Manohar who was so driven, that this time around, despite complex engineering, he finished creating it five days flat! His previous troubleshooting had taught him enough. His latest is Maruti Suzuki Omni with four power functions controlled by remotes and being able to drive in the first and second gear; steer, open the side door and perform pneumatic functions. That’s not all, there are airbags too!

His story is meant to aspire to start building. With only around ten sets, he has built so many different new models. “Building is a basic human instinct that develops dexterity, fine motor skills, hand eye coordination, puzzle solving ability, time management, patience, persistence and perseverance; the ability to plan a build and make it real, gives a hands-on experience on how to take on projects and see it through to completion. Parents must invest in LEGO® instead of getting a mobile device for their child. What he considers as his greatest achievement is his next build, an ongoing project where he created a LEGO® prototype based on a mechanism done by Spain’s David Aguilar to create a bionic hand without any electronics or costly sensors based on simple strings and elastics with LEGO® components built to scale mimicking a human hand.

Keyur Godse, 33, Filmmaker and Entrepreneur has been building with LEGO® since he was a kid but he got completely hooked when a few years ago, he stepped inside a LEGO® store in the US while studying there. A car aficionado and an engineer by qualification, Godse, enjoys driving and testing cars and building models on a pure engineering level. “LEGO® is an obvious extension of all of this. It becomes easy to build something on Technic as the sets are very close to reality. It lets you understand the functionality of some of the key parts quite easily, especially the drive trains and some of the other mechanisms. That’s what draws me towards building it. When I returned, the need to build something and get into this Zen zone continued. It turned into a serious hobby immediately after,” he says.

Godse has built a Land Rover Defender (about 2400 pieces), a small Ducati Bike (with 256 pieces) and a Saturn 5 rocket, which was built on the 50th anniversary of the moon landing. Right now, he is building a Bugatti Chiron that’s about 3500-piece set. “Procuring LEGO® in India is difficult and expensive - The Defender was $200 - in India it would have cost INR 45,000; people quote crazy prices for the Bugatti Chiron. The least I heard was INR 65,000 whereas I got it for $375. It is about 1/3rd the price in the US. You can buy the sets from amazon.com; pay the duty and have it shipped to you but the customs are insane. Hamleys is another good place to buy; they often offer huge discounts on sets that are not moving. The bigger Technic sets are difficult to find especially because they are very expensive here. You’d rather depend on friends or family travelling back from the US to carry it for you than pay that price. Right now, I am stagnating because I don’t have a set to build,” says Godse.

Also, Godse thinks it is important to not start small. “Buy a big piece, see if it interests you. If you are older and even if you are a half bad engineer like myself - you’d want to experiment with the full set to see the possibilities of what a LEGO® can offer. Don’t buy a 256-piece set that even a small kid can do - it doesn’t challenge you as much. Go on lego.com and explore the universe. There are some great architecture pieces that interest me too. Automobile wise, there’s a Lamborghini and Bugatti. Ferrari is coming up in 2022 we are told. Deep within, LEGO® makes you believe you are still that eight-year-old who gets fascinated looking at cars or being in a toy store. All this requires a lot of money - it is an expensive hobby.

You don’t necessarily have to be a car enthusiast for building lego cars. Take Clyde D’Souza for instance. The 40-year-old has enjoyed building LEGO® cars for the last four years. The relatively new hobby has had him build Porsches, F1 cars, MINI Coopers, Ferrari F40s, VW Camper Vans, and a BMW GS so far. “There are very few toys that allow you to use most skill sets of a child’s brain. It builds your motor and analytic skills and hence is very satisfying as a hobby. The ability to create awesome stuff using bricks, the joys of creating a mini world, and experiencing the whole mechanics with the Technic sets is just mind blowing,” says D’Souza. 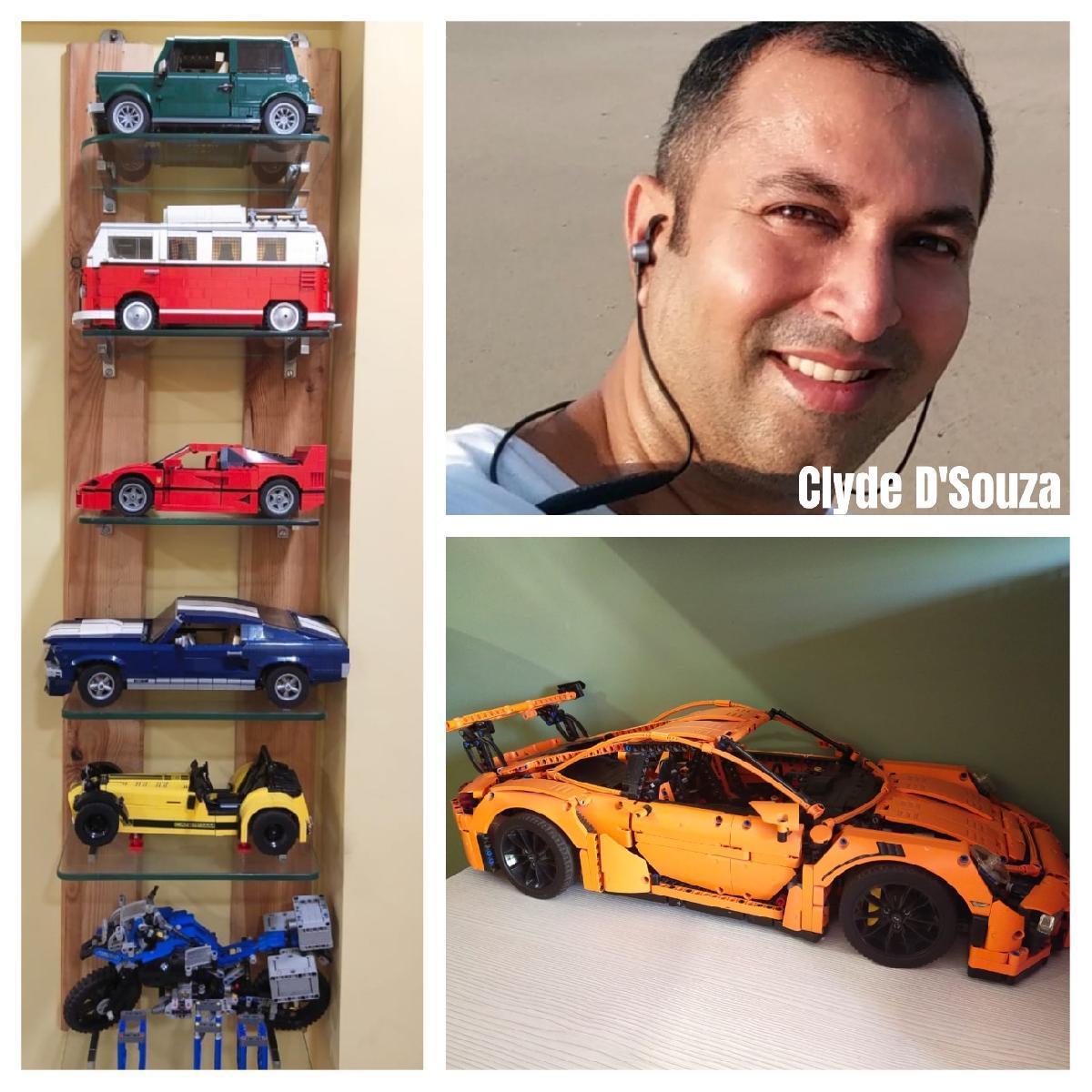 D’Souza does closely follow several international groups of LEGO® on Facebook where people from across the globe do some killer stuff with bricks. Along with fellow LEGO® enthusiast Siddharth Toprani, D’Souza, has started an India-centric page called Legofyde. “Since LEGO® has now come into India, we are hoping they get a stronger investor here so that they can have competitive prices and a good presence in the country. While customers are aware, the engagement is poor, especially with MOCs due to poor availability of random bricks and pricing. And in the meanwhile, just get on to Technic United, on Facebook, to you’ll see all kinds of mean creations that are being made the world over,” he says.