In defence of the Defender

Want to know how to add dollops of glam to rugged appeal? Just go get yourself a Land Rover Defender

Most people will tell you Born Free when you ask them which is the first film you’ll associate the Land Rover Defender with, and they’d be wrong. Brand Land Rover did play a crucial role in the movie starring Virginia McKenna as Joy Adamson and Bill Travers as George Adamson, the couple that saved Elsa the lioness. In fact my first memory of a Landie is that particular film. Yet, you’d be inaccurate to associate that Land Rover with the Defender. The thing is, the film was made in 1966 and the name Defender did not make its appearance until the 1990s. My first memory of the Defender on celluloid would have to be Lara Croft: Tomb Raider, starring the gorgeous Angelina Jolie. Hot is the only word that comes to the mind when I think of Croft (Jolie) manoeuvring the black Defender through the jungles of South East Asia. There was something undeniably glamorous about the boxy shape with the round headlamps.

The Landie that Daniel Craig will pilot in No Time to Die, his last outing as 007, is a completely different one. A generation ahead of the black Defender of the yesteryears. Svelte, yet super capable, the new Landie has truly given Bond a license to kill in every shot featuring the car. Having seen the teaser that Land Rover had released quite some time ago, I can’t wait to see the full film. Unlike in the down to earth Born Free and very much like in the swashbuckling Lara Croft: Tomb Raider, the new Defender is incredibly cool.

Having moved on from my profession as a career journalist, I have not yet had the opportunity to drive the new Defender that was launched in India only recently. With prices starting at Rs 73.98 lakh, ex-showroom, I’m also equally aware that the latest generation of this iconic Landie is well beyond my reach. Yet, I am fascinated by this vehicle. At first I assumed that I’d be part of a niche that finds things beyond their reach fascinating but it appears that the niche is much larger than I first thought. There is a clear and distinctive impression that brand Land Rover, especially the Defender, seems to make on public consciousness. Begs the question, why? What is it that is so unique to this Indian-owned British marque that evokes this kind of emotions?

To my knowledge there is exactly one other brand that is capable of doing the same. That one comes with a twang instead of the quintessential stiff upper lip. Yet, none of the idiosyncracies of their national identity inhibit the capabilities of either brand. Rather, it is their capabilities that form the very basis of their DNA. Their ruggedness and ability to take and absorb punishment with casual nonchalance defines the essence of their being, and it is through this lens that we must look at the iconic Land Rover brand and its products.

Back to the new Defender. From what I have read thus far, the Defender is packed to its dashboard with all sorts of luxuries. A cutting edge infotainment system, all sorts of driver assistance systems, convenience features like wireless charging, an activity key that you can wear on your wrist like a watch, multi-zone climate controls, heated and cooled seats, you name it, the latest Landie has it. There is absolutely nothing that the Defender lacks in its arsenal when it comes to holding on to its frontiers against the onslaught of other luxury SUVs.

Yet, not one of these luxury items has made an impact on the more interesting spec sheet that Defender enthusiasts would be interested in. It all begins with the geometry that allows the Defender crazy aspects like a 38-degree angle of approach or a 31-degree breakover angle. Then there is the configurable Terrain Response system and finally a combo of permanent all-wheel-drive, an electronic active differential and a twin speed transfer case. It’s all there. So it wouldn’t be unfair to assume that the Defender will be able to defend its case as a capable vehicle, easily. 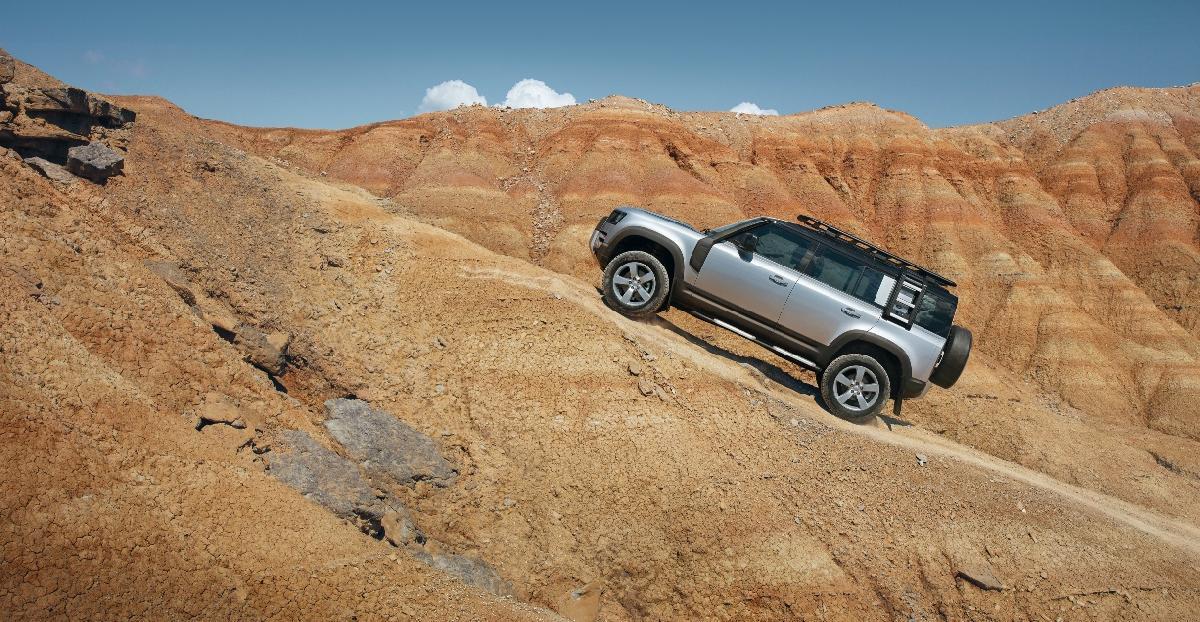 While the purist will suggest that this is a dilution of the Defender’s core essence, I have a diametrically opposite idea about the Defender. To me, out of the entire LR portfolio, it has always been the Defender that has put itself forth as a bridge between the worlds of luxury, glamour and rugged appeal. The other Landies may be capable and might offer more luxury or comfort but to me it is the Defender that offers the perfect balance between these two fundamentally opposed worlds. There are those who would cite Born Free as the essence of the original idea behind the Land Rover. To them I say that the Land Rover we see in the ’66 film harks back to an era when the effort to bridge the gap between luxury and ruggedness hadn’t yet begun. In any case, the vehicle itself wasn’t the Defender. It was an ancestor for sure, but not a Defender. The latter would simply have been out of place in the African wilderness of 1966. The Defender’s range of capabilities don’t just finish where the roads start again. Rather they extend well beyond and will see you through to a red carpet event in style with as much elan as when bouncing over the jungles of Borneo or the dunes of the Sahara.

There are a few other things that make the Defender stand out in a garage full of SUVs. First, is its Britishness. Whether it is Jolie’s old Defender of 007’s new ride, there is no mistaking the Landie’s stiff upper lip. Uncompromising in its approach yet subtle enough to be able to play diplomacy should the need arise. The Defender is also about aspiration. There’s a certain romance to this Landie that will make you dream of driving over vast tracts of savannah or maybe continuing to drive on long after the roads have given way to rough dirt tracks. It comes across as an enabler that will let you do things that other SUVs simply won’t or will at least baulk at. Why else would Sir Leigh Teabing choose this particular Landie to make his getaway with the keystone, Robert Langdon and Sophie Neveu in Dan Brown’s The Da Vinci Code?