“A thing of beauty is a joy forever.” No other mid-sized sedan epitomizes it better than the fifth generation Honda City.

Reams have been written about Honda City’s runaway success since its debut back in 1998 in India. Not one to rest on its laurels, Honda, continued to acquire feedback from its customers, toiled hard to better the City, and in every successive car that it introduced over the decades, it never ceased to amaze. No small feat that! In fact, it wouldn’t be an exaggeration to say that few mid-sized sedans have enjoyed the popularity that the Honda City has over the years. Not only does the car sell in 60 countries across the world, but it has also sold more than four million units (worldwide), and “provided joy” to eight Lakh customers in India. Now, 22 years after the City’s debut, its fifth-generation model, developed at Honda R&D center in Tochigi, Japan, looks equally promising. However, will stiff competition and hard times still continue to see people making a beeline for the City? Read on and thou shalt be enlightened.

The City has always been big on looks and the 5th generation Honda City is an absolute stunner! Undoubtedly for this beautiful sedan, this time around both, the designers and the engineers, at Honda, have really pushed the envelope to ensure that they have a very futuristic car and this is evident not only through their design but also through the powertrains and technology that is now on offer. For starters, the designers have drawn inspiration from the Japanese Katana blade, a curved sword used by ancient samurai and this has been integrated into the car’s design.

What I really like about the City’s design is the manner in which the old blends seamlessly with the new, how the car retains bits of the previous model’s boxiness, yet blossoms into its rather curvy avatar. More importantly, the design also ensures that despite its sophisticated semblance, the car does not lose its sporty character and both come together to give it a distinct character and an inner strength. Talking of strength, the City now uses a high strength steel which makes you feel extra secure in the knowledge knowing that you’re not driving a rather tinny car out there. 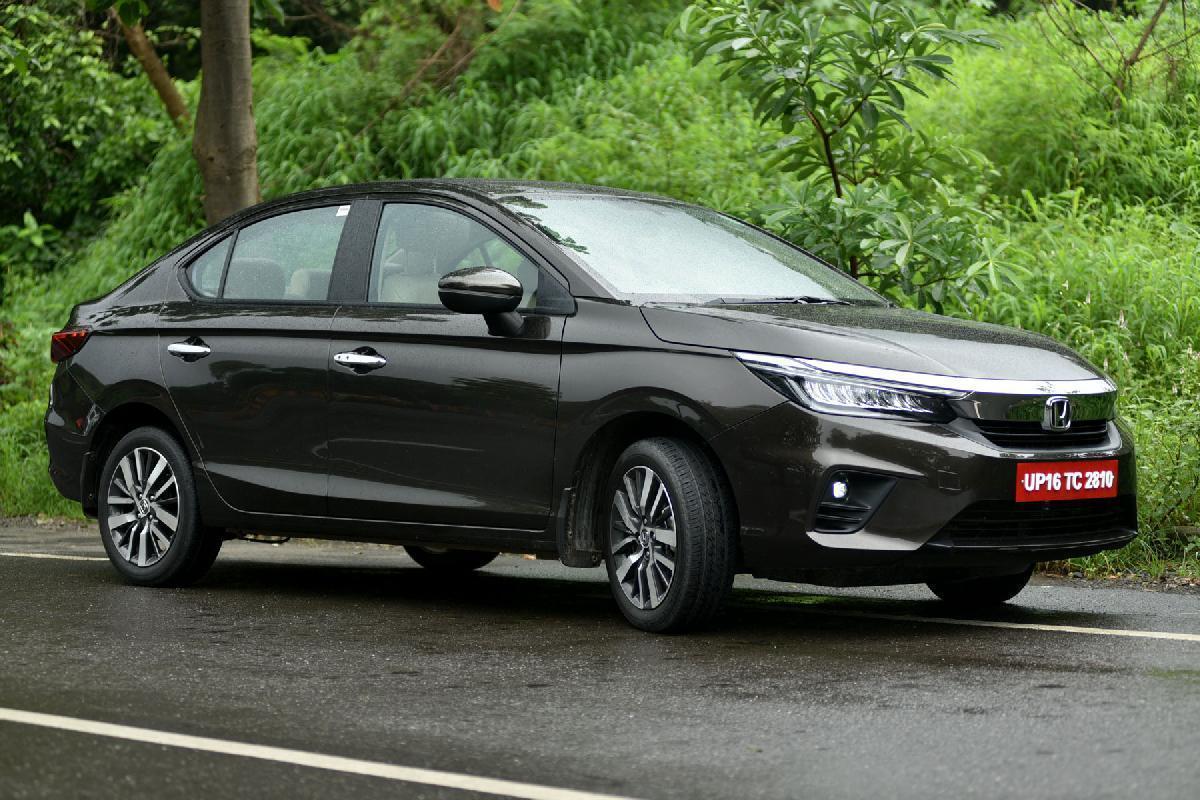 The City gets full LED headlamps with 9 LED Array Inline shell, integrated LED DRLs and L-shaped LED Turn signals which really make the car stand out like a precious jewel. You cannot miss the car’s thick nose which is integral to its overall design as it adds to the beauty of the long bonnet and gives the car a solid presence. But, what truly bowled me over was the thick chrome front grille which in combination with the LED lights mentioned above, just sets the car a class apart. And I’m not even a chrome fan! However, it must be said that the use of chrome on this car has been done so stunningly that you really can’t help falling in love with its gorgeous design. Then there is also the car’s sharp shoulder line which prominently brings into focus the length and the width of the car which now stands at 4549mm and 1748mm respectively, making it the longest and the widest mid-sized sedan in the segment. With its height at 1489mm and wheelbase at 2600mm, this car has such beautiful proportions that you truly have difficulties finding fault with it. 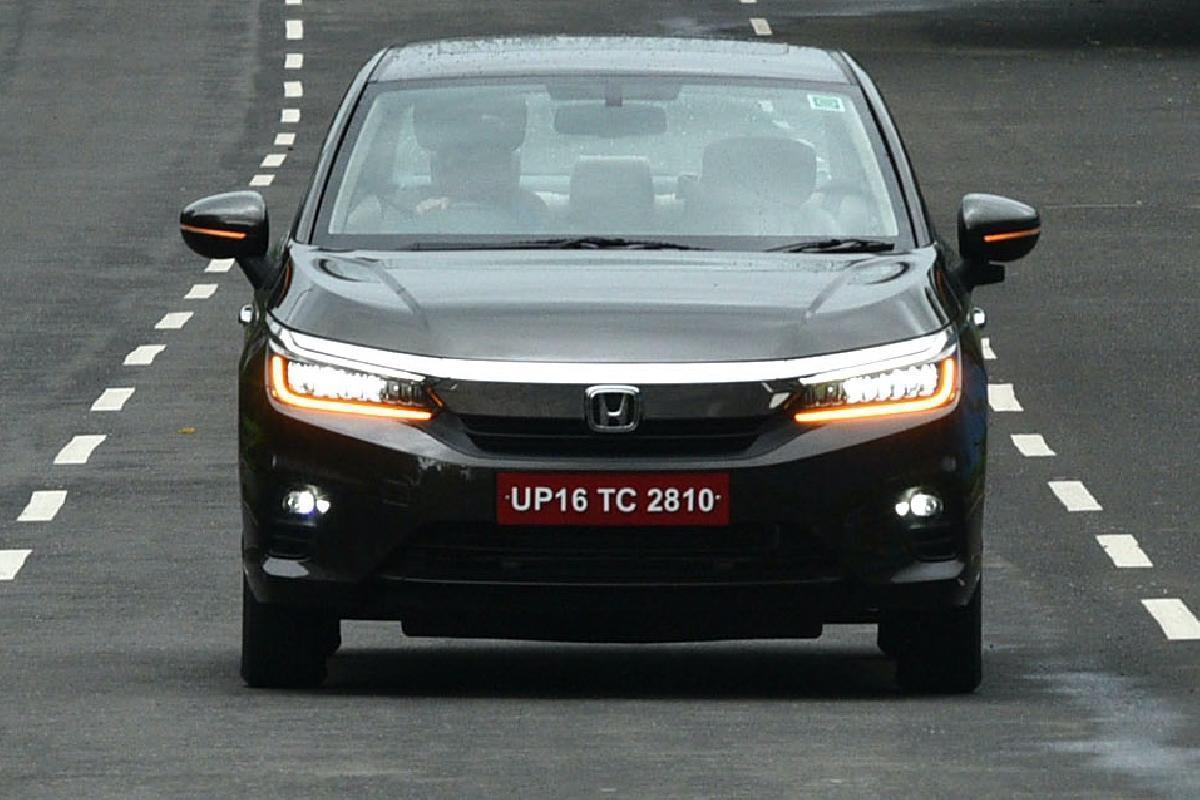 At the rear, the City gets Z-shaped 3D wraparound LED tail lamps with Uniform Edgelight which have been beautifully integrated into the car. Drivers tailing the City or the ones who’re stuck in traffic behind the City will be the ones truly appreciating the distinct design of the mid-sized sedan’s spectacular tail lamps in its truest sense, especially during night time and hopefully, the tail lamps will do the job of enticing many a future buyer and bringing them into the Honda family. Yes, they’re truly exquisite. 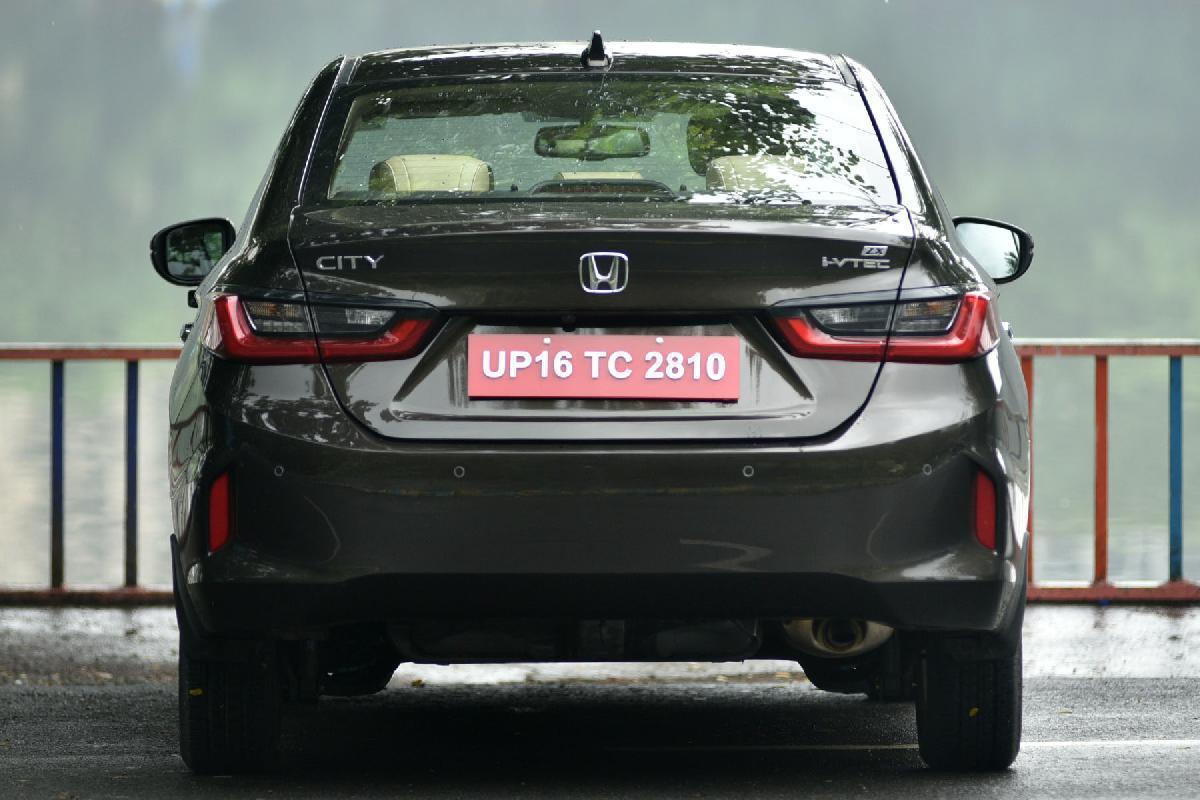 Lest we forget, there are also the R16 Diamond cut alloy wheels that lend to the City’s striking good looks. 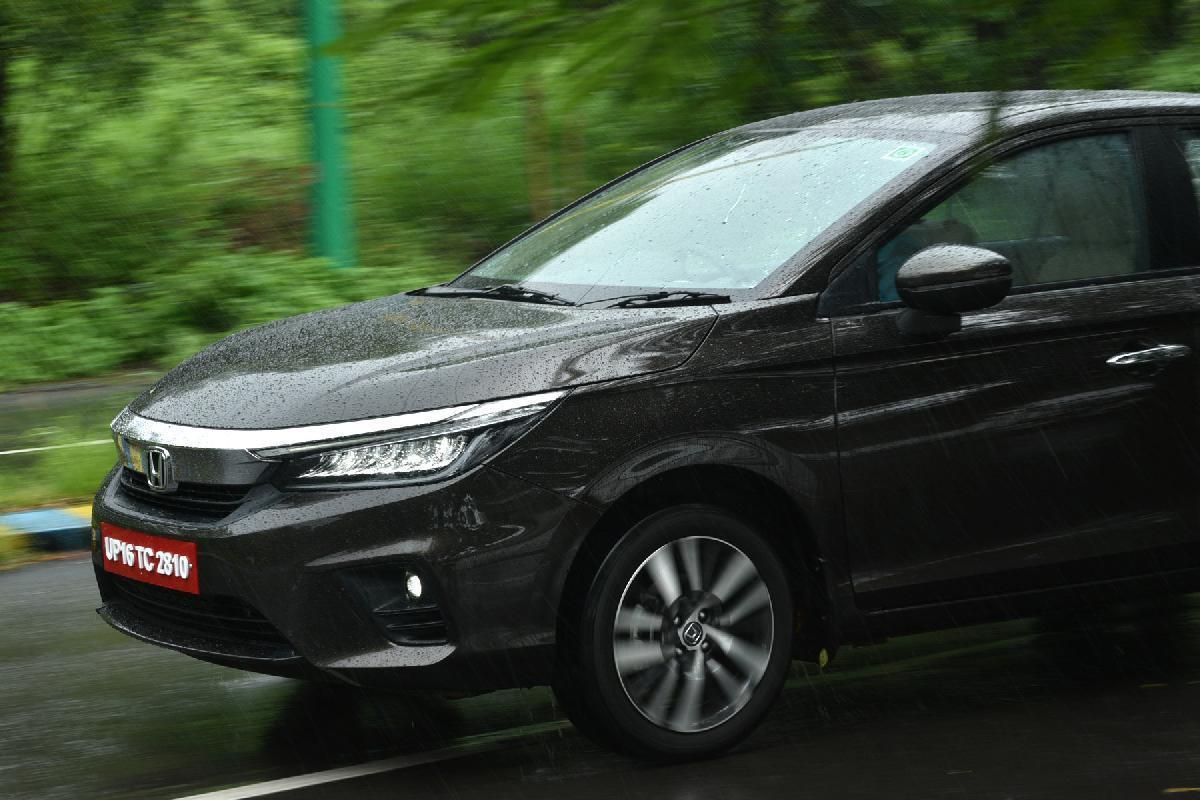 Enter the City’s spacious cabin and you will be greeted with the familiar chrome ‘H’ for Honda, set on the really meaty leather steering which I really liked a lot. But more on that later. The cockpit is ergonomically designed and has a blend of both soft and hard plastics on the surface, with soft plastics dominating which is never a bad thing. A place to hold your soda cans has been created upfront, below the Touchscreen, and from the looks of it, it does seem that the cans slide down slightly more in the deep well there, thereby ensuring that your beverage won’t spill over even if the car encounters some unsafe potholes. Besides, there is plenty of space in the cabin for bits and bobs and you can even carry one-liter water bottles with ease in the car’s doorpockets. 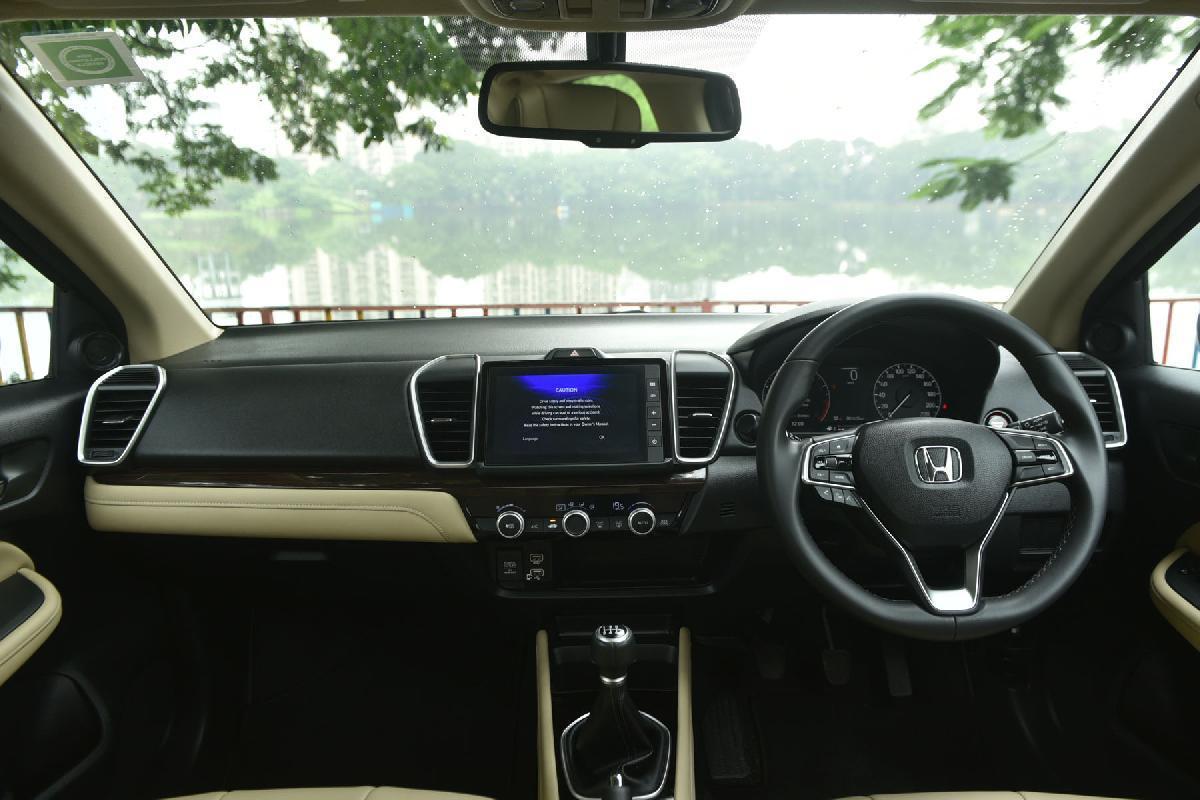 The instrument cluster offers a no-fuss crystal clear reading from the dials, in white, which makes for super easy reading for everyone. If you start the car without your foot on the clutch, an indication appears depicting the clutch, a brake and an accelerator to show you what you should actually be doing. Pretty neat, especially for people who jump out of automatic cars and into manual cars quite a bit. 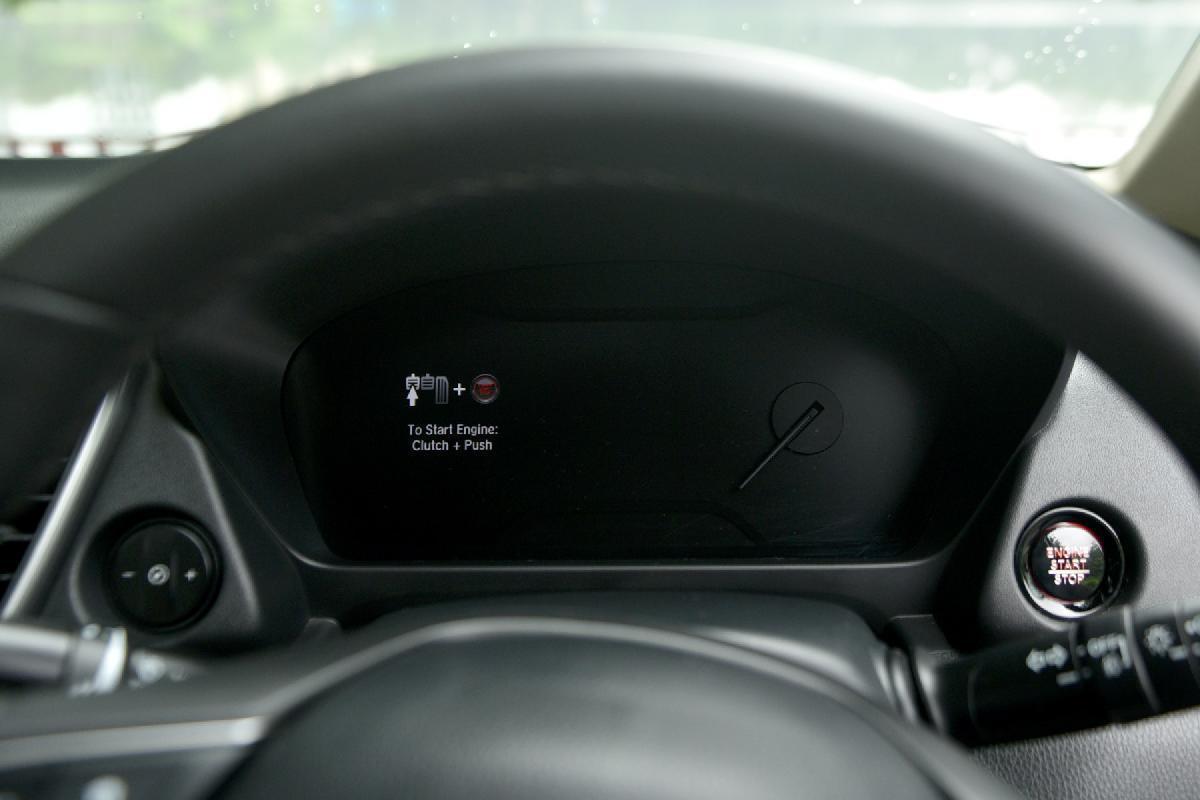 There is a 20.3 cm Advanced Touchscreen display which is angled in a way that may take some of us a little time to get used to, especially if you have been driving cars with upright infotainment displays. The City also comes with a 17.7 cm HD full colour TFT meter for giving the driver all car and driving related information such as trip meter and fuel efficiency, which as opposed to the Advanced Touchscreen display quite is crisp and easy to read. 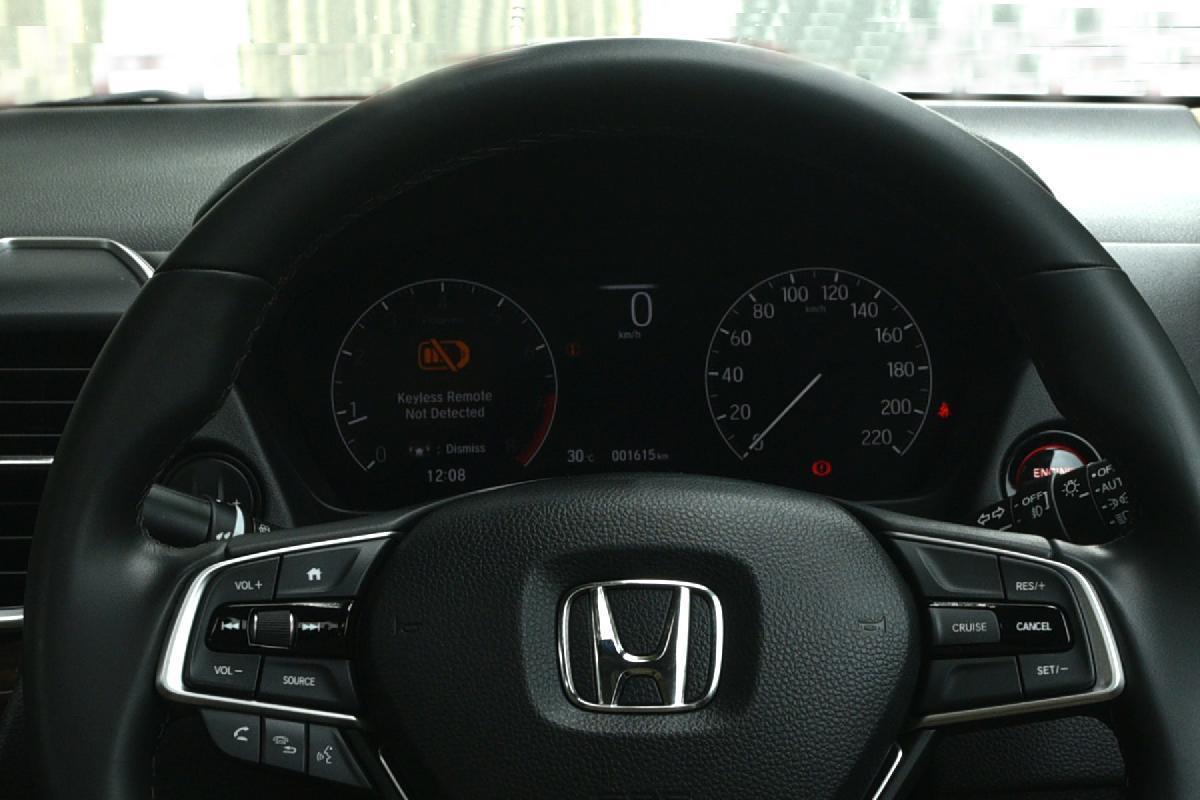 With Android Auto and Apple Carplay, and an eight-speaker surround sound system for audiophiles, things should be a breeze to set up inside the car as well as an aural treat. There is also next generation of Honda Connect with Telematics Control Unit (TCU) which comes as standard on all grades of the City with a five-year subscription and considering it is India’s first connected car with Alexa Remote capability, it really will enable all buyers to do a bunch of things remotely. So, if on a lazy Sunday evening, you want to check whether you have enough fuel in your fuel tank to get to that crazy Monday morning business meeting directly, without stopping to get fuel en route, you can do so sitting in your multi-storey building, without taking the elevator and coming down to physically check. Similarly, if you want to check the air pressure of your car’s tyres, that too can be done sitting at home on your favourite couch. Talk about changing lifestyles!

Talking about the car’s interiors, the beige and black interiors really elevate the City’s looks to a whole new level. Not only do they make the car look more spacious than it already is, but they also makes the car look fresh and inviting, thanks to the premium materials that have been chosen to make the interiors more comfortable. The electric sunroof also adds to the spacious feeling bringing in more sun and air, thereby making the cabin appear roomier. The fit and finish inside the cabin are excellent and the seating comfort on all the seats at the front as well as at the rear is simply outstanding with enough head, knee and shoulder room. Little surprise why members of so many families prefer being chauffer driven in the City. Evidently, one of the main reasons is the rear seat comfort which is truly unparalleled. 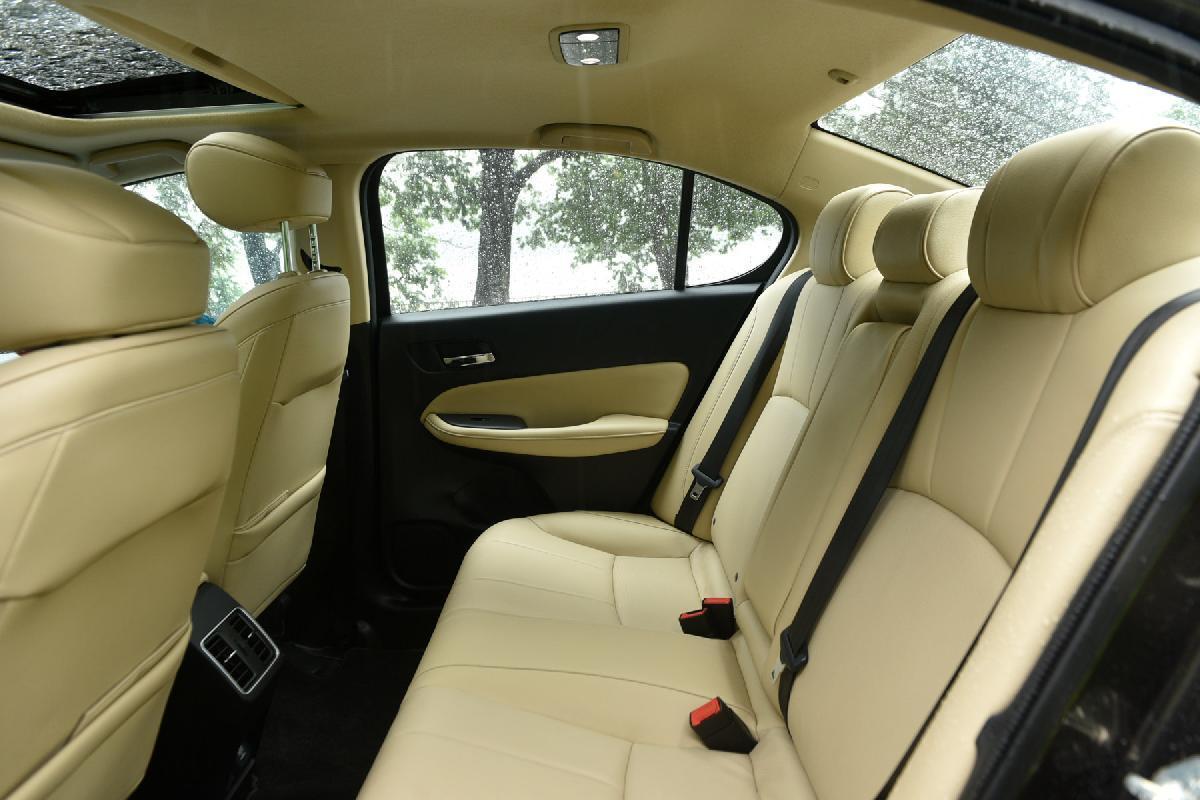 The City comes with a cavernous 506-Liter boot which can handle all your family’s luggage and no, we’re not talking about weekend trips where all you carry is a hold-all. We’re talking about big, bulky hard top suitcases, two or three which the City can easily swallow with room to spare and believe me when I say that that is no exaggeration! 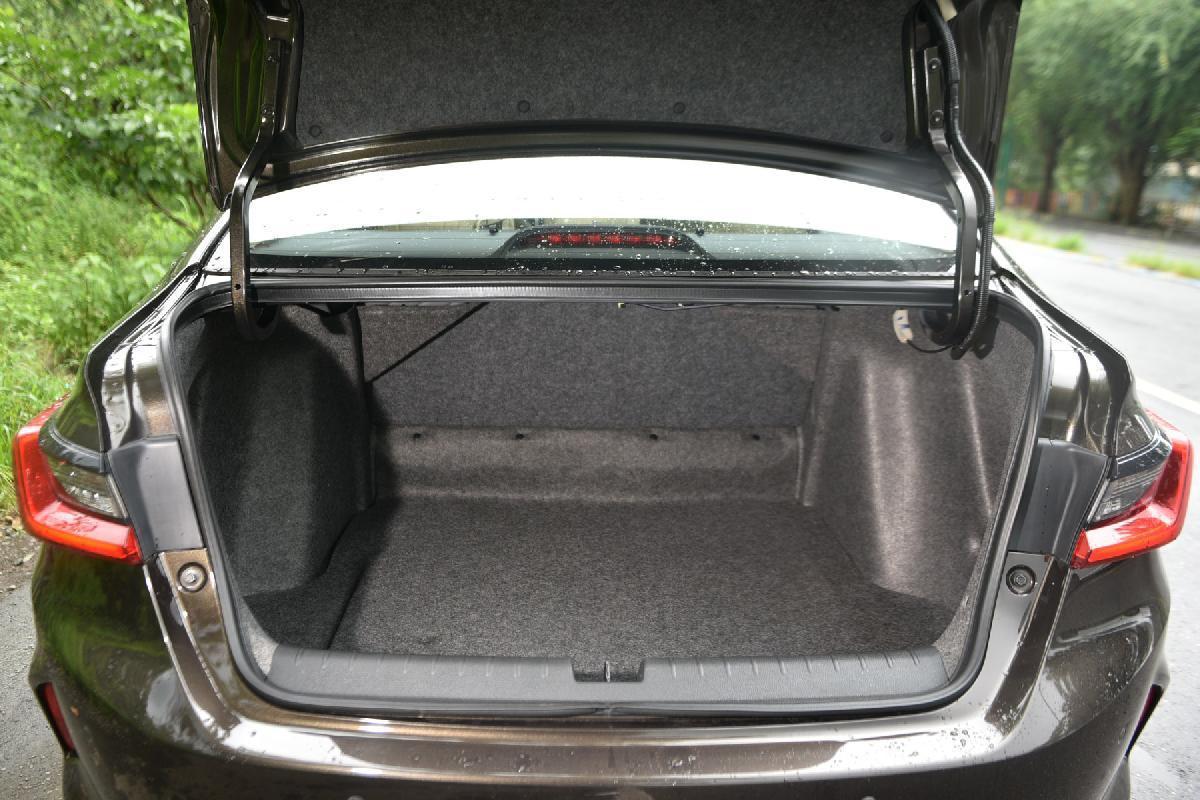 While the City gets both petrol and diesel BS-VI compliant engines, I drove the 1.5L i-VTEC DOHC Petrol that had been mated to the 6-speed manual transmission and let me tell you at the outset that it was a lot of fun. This engine which delivers 89kw @6600rpm and 145Nm@1750rpm of torque is quite a sprightly one. The gear shifts were quick and smooth and while there was some body roll that was felt, honestly, it isn’t going to be a dealbreaker. However, this is a car for all of you out there who love revving the engine and driving really fast. Be warned though that the minute you cross the 80 kmph mark, a red warning light on the right side of the Advanced Touchscreen appears, indicating for you to slow down. Rest assured that the City’s 6-speed manual will not disappoint and you will be zipping around in great style. 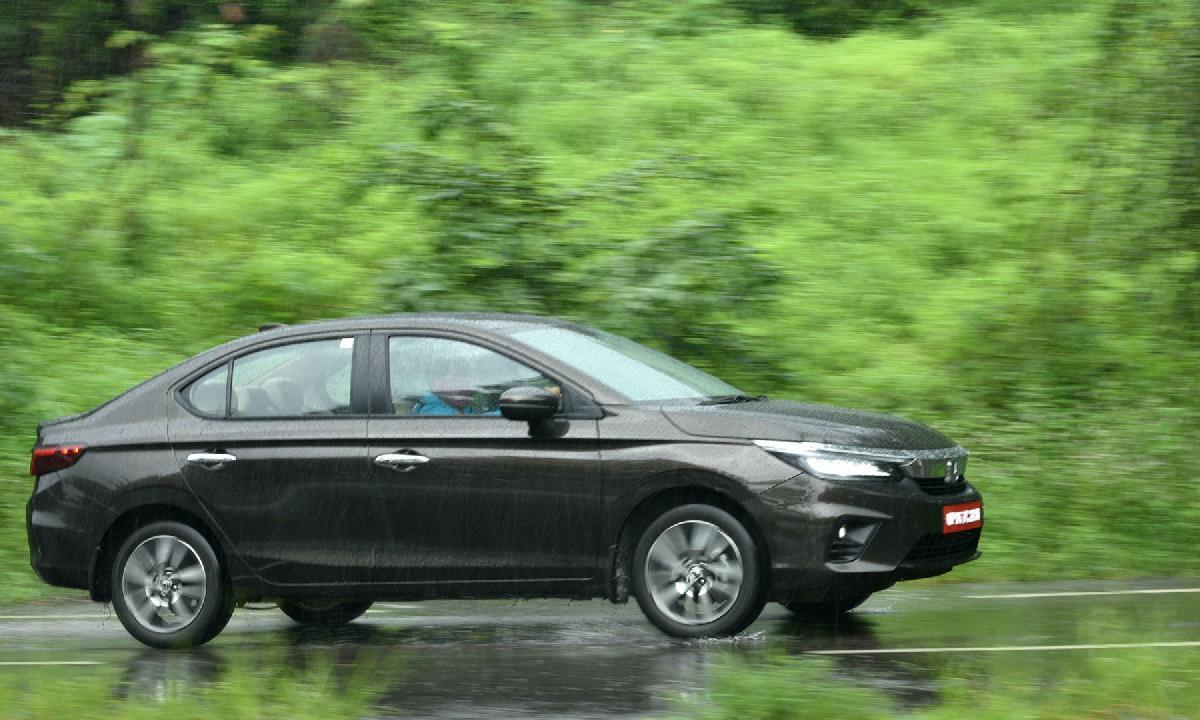 The car also offers very good overall visibility and the driver’s seat is really well-sized to accommodate most Indian body types. The steering also is precise and the car simply glided over Mumbai’s potholes which frankly says a lot about its excellent suspension setup. The car comes in three variants, V, VX and ZX. The ZX variant that I drove came with all the bells and whistles.

At 13,14,900 (Ex-Showroom, Delhi), the new Honda City is a good buy because not only is it technologically advanced with some great safety features but it is also a beautifully designed car that you will enjoy owning and driving in the years to come. With a three years unlimited kilometers warranty and a low maintenance cost and service interval of 10,000 km or one year, whichever comes first, it will offer you great convenience and comfort with the assurance of pretty good fuel efficiency (17.8kpl) too. And needless to say, John Keats knew what he was writing about when he wrote the immortal lines, “A thing of beauty is a joy forever.”