With the burden of great expectations and success, will the new Hyundai Creta thrive under pressure and become a segment leader like its predecessor or will the others also be making a mad dash for the crown?

The judgement was passed, obituaries were written, and the guillotine was readied for the first-generation Hyundai Creta as its crown was quickly passed on to a new rival without realizing that the second-generation avatar was on the horizon. As expected, the 2020 Creta took the market by storm, but no one could have scripted a fairy tale return as it became the best-selling vehicle in May, a first for an SUV to take the numero uno position on the sales charts, beating the popular hatchbacks. Hyundai continued to stamp its authority and it remains the only SUV in the top five best sellers list, selling a whopping 11,549 units in July. Now, as impressive as the numbers are, what one really wants to know is how the new Creta actually is and so, we got behind the wheel just to find out. The Creta is available in three powertrain options — 1.4-litre turbo petrol, 1.5-litre naturally aspirated petrol and the 1.5-litre diesel. If you’re not already spoilt with choices, the SUV also offers a plethora of transmissions — three automatic options and two six-speed manuals. As the Creta sells over 55% diesel units, the mainstay will continue to be the diesel manual trim and that’s the one we’ve reviewed. 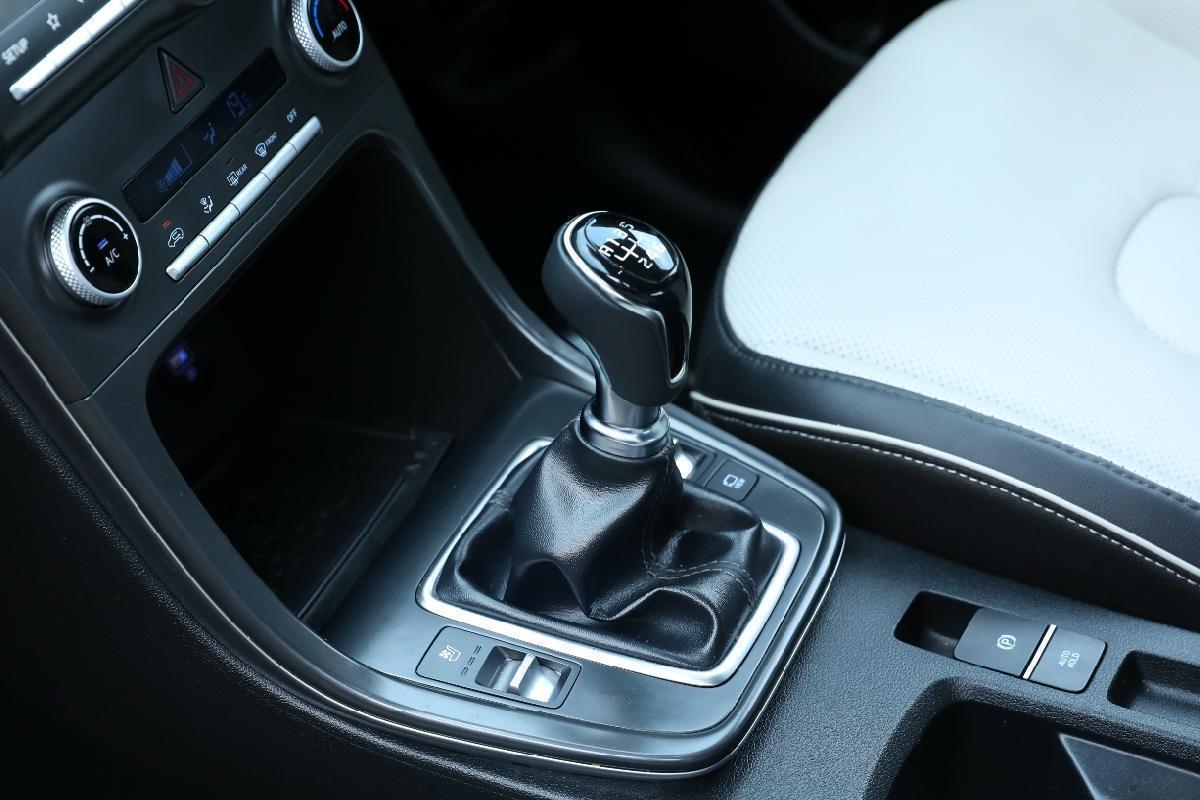 Starting with the Creta’s new design, Hyundai has taken a radical departure from the first generation’s conservative looks. The snout looks more squarish thanks to the new in-your-face cascading front grille, which is part of Hyundai’s new global design philosophy and one must admit it gives it a butch look. 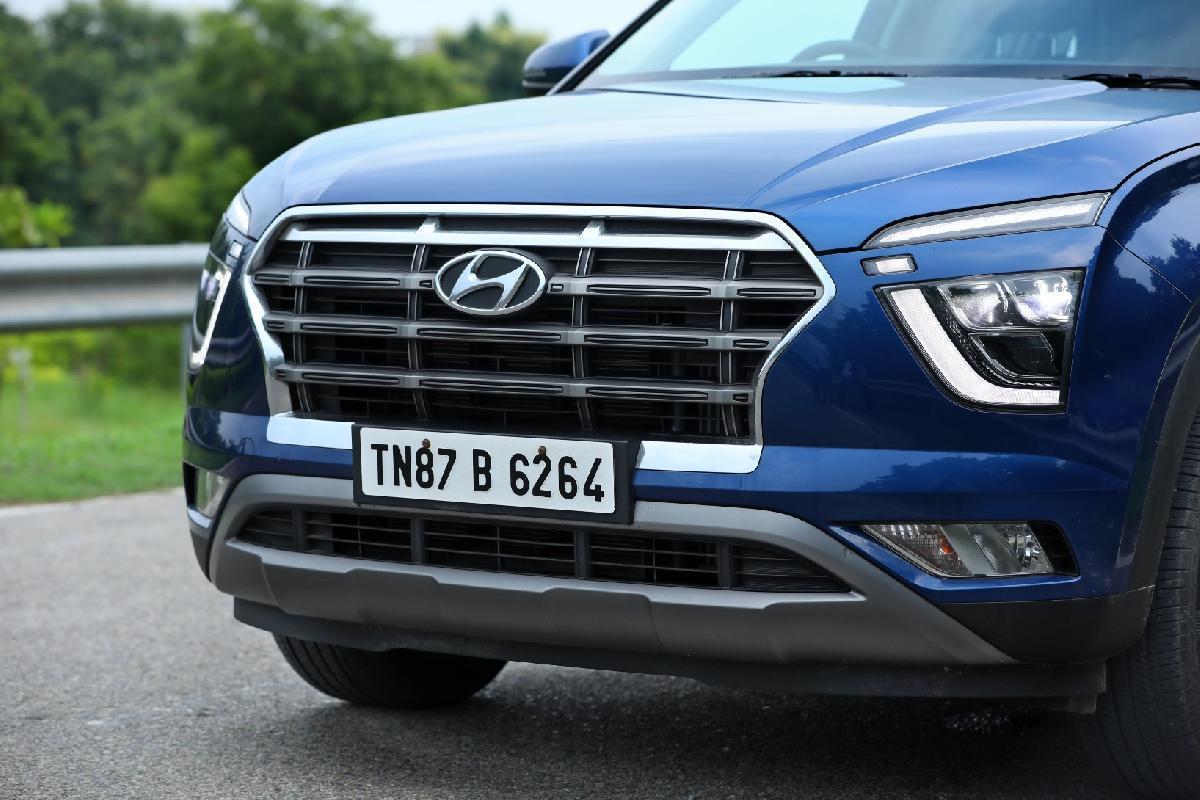 The three cube-shaped LED headlights along with the L-shaped DRL and another DRL strip above the cluster gives it a very busy look. This split headlamp design has been quite a popular choice for the manufacturers in the last couple of years as it’s seen on many other SUVs like the Tata Harrier, the MG Hector and the Venue. 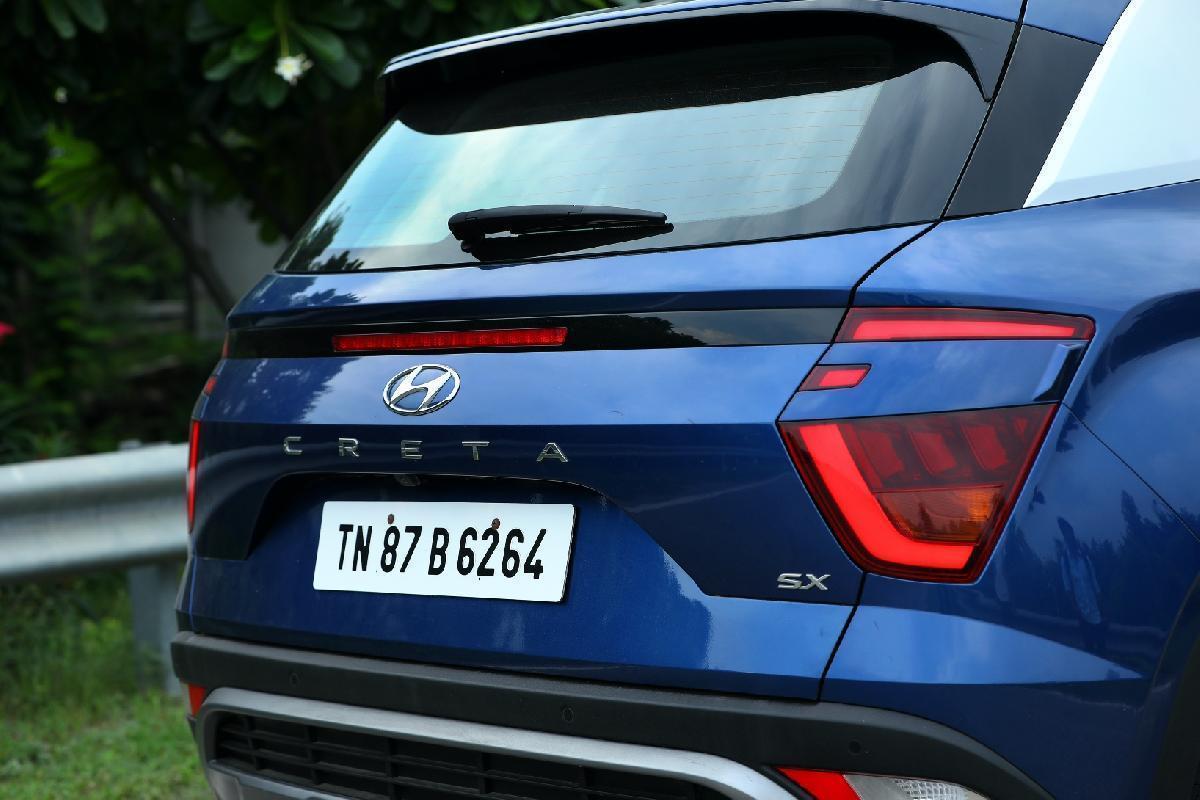 Credit to Hyundai as this design manages to make the Creta look bigger than it actually is, which is something all SUV owners will revel in. Coming to the side profile, with the bulging wheel arches, prominent character lines running across the doors and on the bonnet, silver-coloured C-pillar and the new 17-inch diamond-cut alloy wheels, the Hyundai SUV makes quite an audacious statement. The rear lamps too retain a trio spilt cluster. All-in-all, the new design might come across slightly quirky, but it does grab a lot of attention on the road. 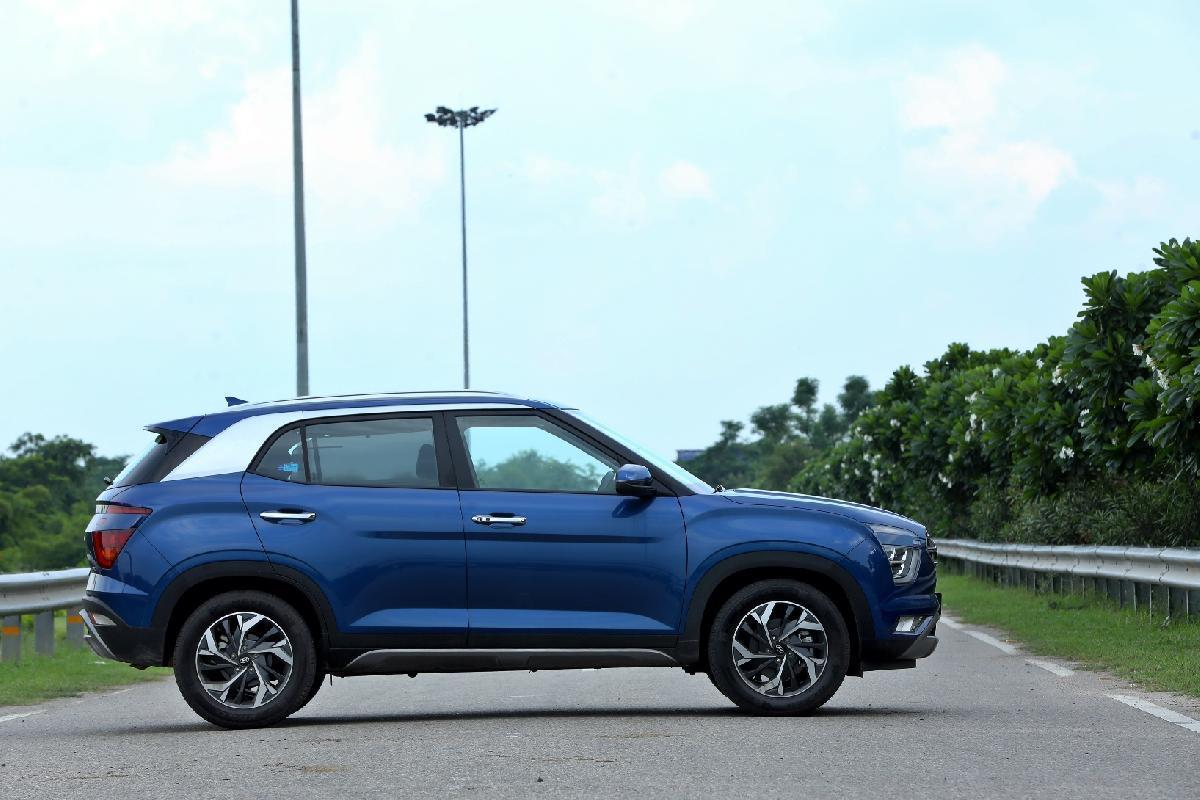 So, we’ll let you decide whether the exterior design catches your fancy or not, but what will impress you is the new cabin layout. 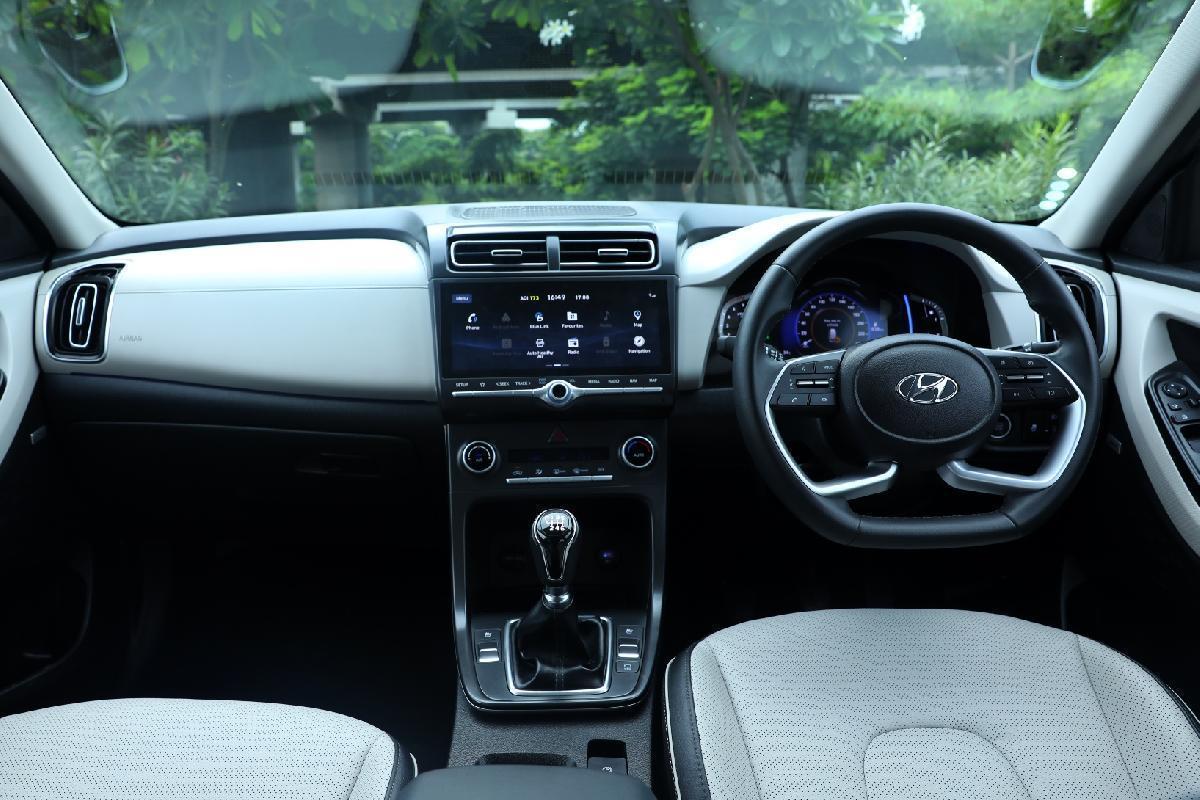 Step inside and the first thing that you will notice is that Hyundai has decided to give the old 7-inch touchscreen the boot and has replaced it with a new horizontal 10.25-inch infotainment system. The new touchscreen is intuitive, the HD display is crisp, doubles up as a navigation system and it’s equipped with smart connectivity features via Blue Link and offers both Apple CarPlay and Android Auto. Furthermore, there’s great news for audiophiles, the top-of-the-line Creta comes with an 8-speaker Bose sound system. The clarity is articulate and negates any distortion. It easily drowns out the outside traffic noise. 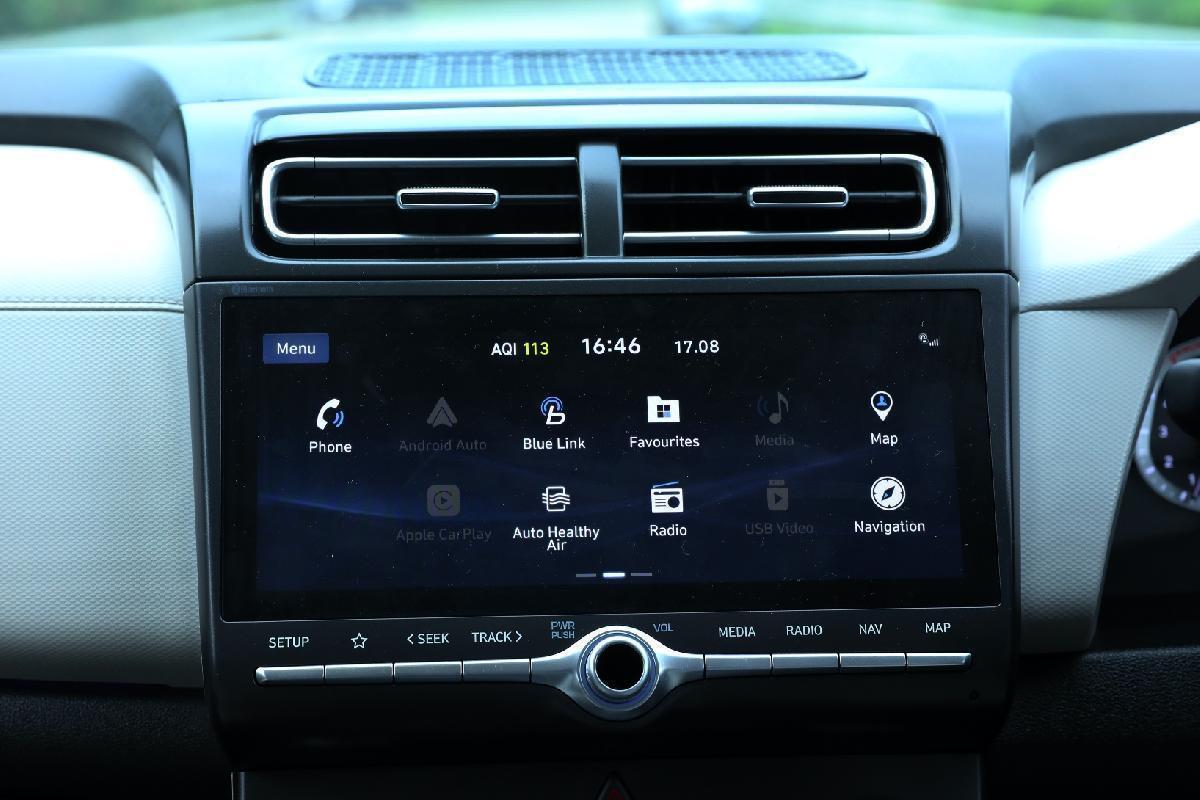 The new dual-tone black and grey dashboard and upholstery give the cabin a premium feel, but the plastic quality, especially the upper dash and the door panels, could have been better. With the use of hard plastics everywhere, the grey paint is a saving grace as it manages to camouflage the quality. Many will say that that the new flat-bottom steering wheel somewhat resembles the Audi A6, and we also agree, but more than a fancy new design, Hyundai has added much needed additional weight to it. Therefore, it feels more stable on high speed unlike the older Creta, which felt featherweight and twitchy. 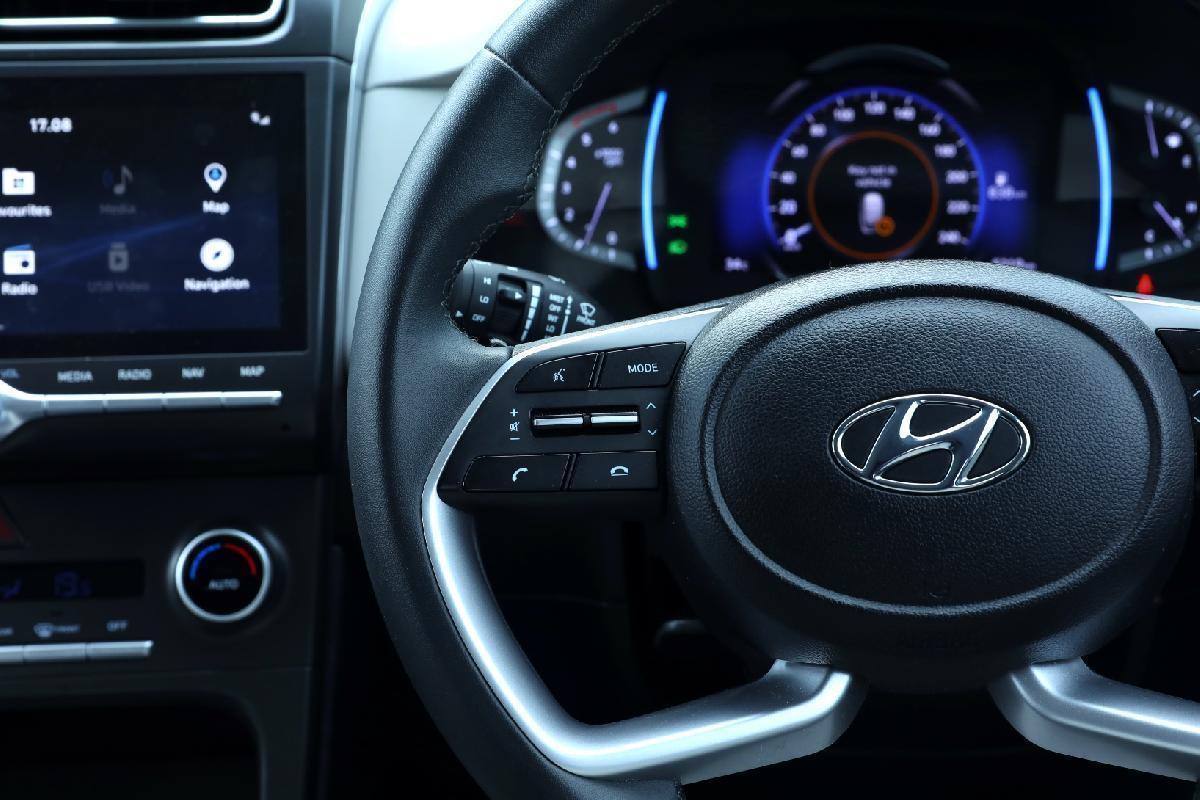 The new Creta will pamper its passengers with the new well-contoured seats. The beautifully crafted creases offer additional support and the front seats are equipped with ventilated vents, which is a boon during unforgiving summer times or the current humid monsoon season. Unlike most SUVs, a lot of focus is also given to the rear passengers as the backrest of the bench is designed in an angular position for more comfort and the seat squab offers tremendous under-thigh support, which only the Tata Harrier can boast of. The Creta now comes with a massive panoramic roof, which lightens up the cabin making it airy and spacious and it still doesn’t eat into the headroom space. As the new Creta is 30mm longer than the older version, this translates into generous legroom for rear passengers, even for those above 6 feet in height. A third passenger can be accommodated in the middle seat, but the leg space is limited due to the centre console that houses the rear AC vents, USB port and an air purifier. 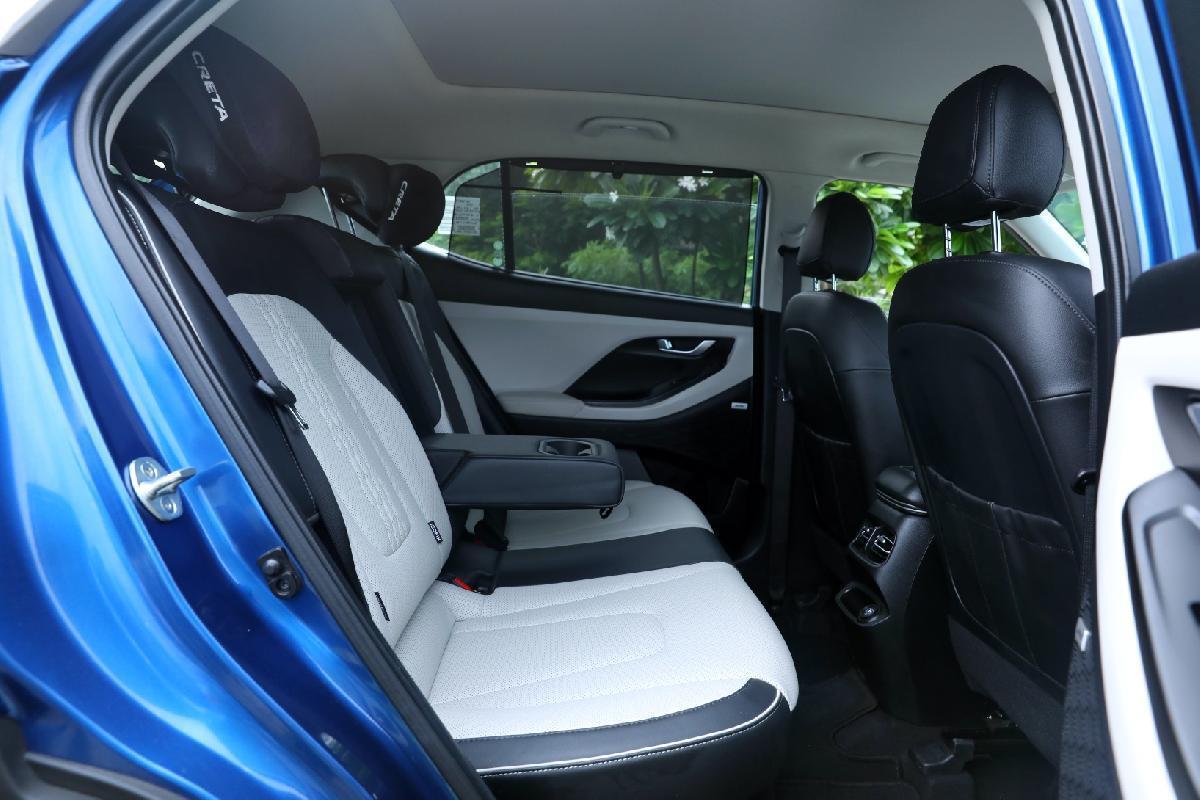 It’s now time to buckle up and press the ignition button. Straightway we could make out that the new 1.5-litre diesel engine is quieter than the old 1.6-litre one. Step on the throttle and the Creta accelerates in a smooth linear manner, which was a pleasant surprise as the previous powertrain was more audible and had a pronounced turbo lag. Within 4,000rpm, the new motor is fairly silent but what was even more impressive is its pulling power. Slotted in third gear, the Creta could gradually build up speed from 1,000rpm without any engine knocking sounds. Of course, it takes a bit of time, but it never huffed and puffed forcing us to downshift. Yes, the new diesel engine churns out 113bhp which is substantially lower than the 1.6-litre’s 126 ponies, but the former is so refined and with the torque evenly spread across the powerband, the new powertrain never feels underpowered. The advantage of this is that the Creta can easily be driven in start-stop traffic in the city without needing to change gears regularly plus there’s always enough power to keep it trotting along without any stress. 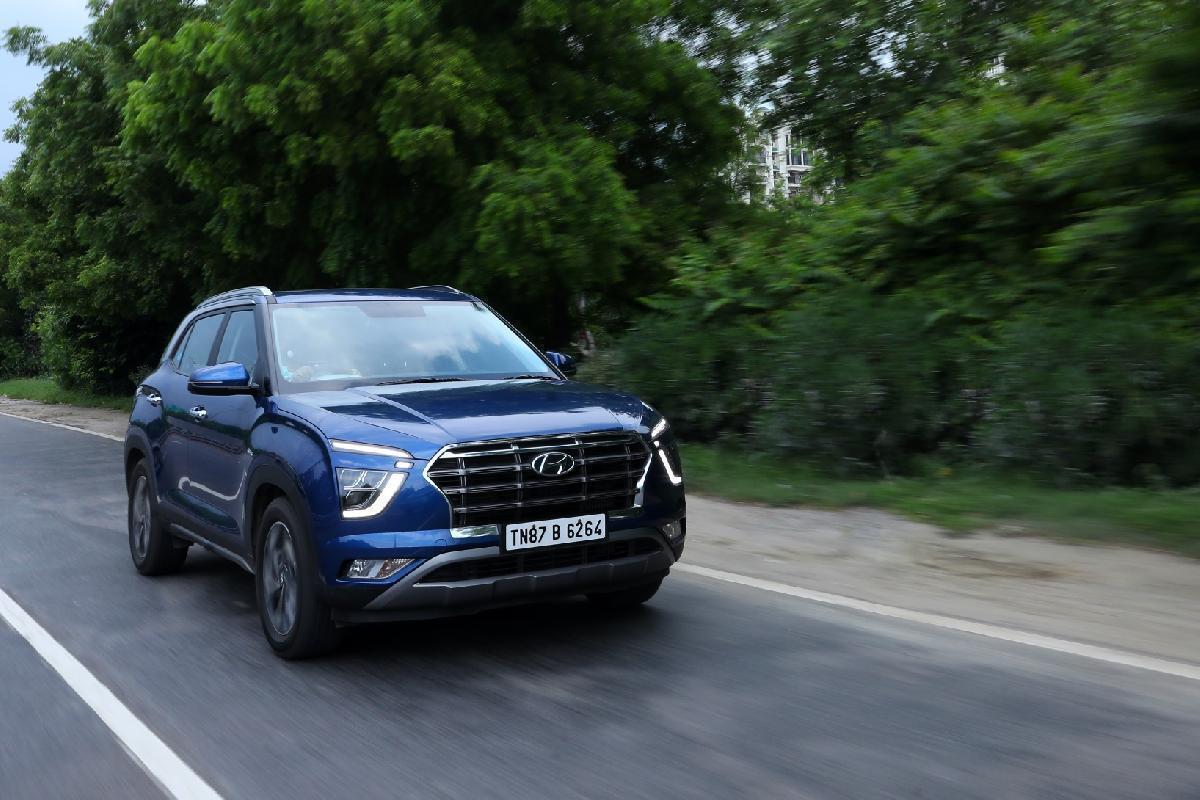 Creta continues to be more focused on comfort rather than an enthusiast’s delight, therefore, the suspension set up is on the softer side and this ensures that the rear passengers don’t feel any spine busting thuds when it goes over a pothole. Throwing it around corners and attacking tight turns is when the body roll becomes very evident and therefore, we suggest you shun any such ideas. No doubt, the current Creta is more pliant than the previous generation as it now barely wallows, but in no way is it a handler like its cousin, the Kia Seltos. The new Creta also exuberates more confidence while driving because the top two variants — SX and SX(O)— now come with rear disc brakes. 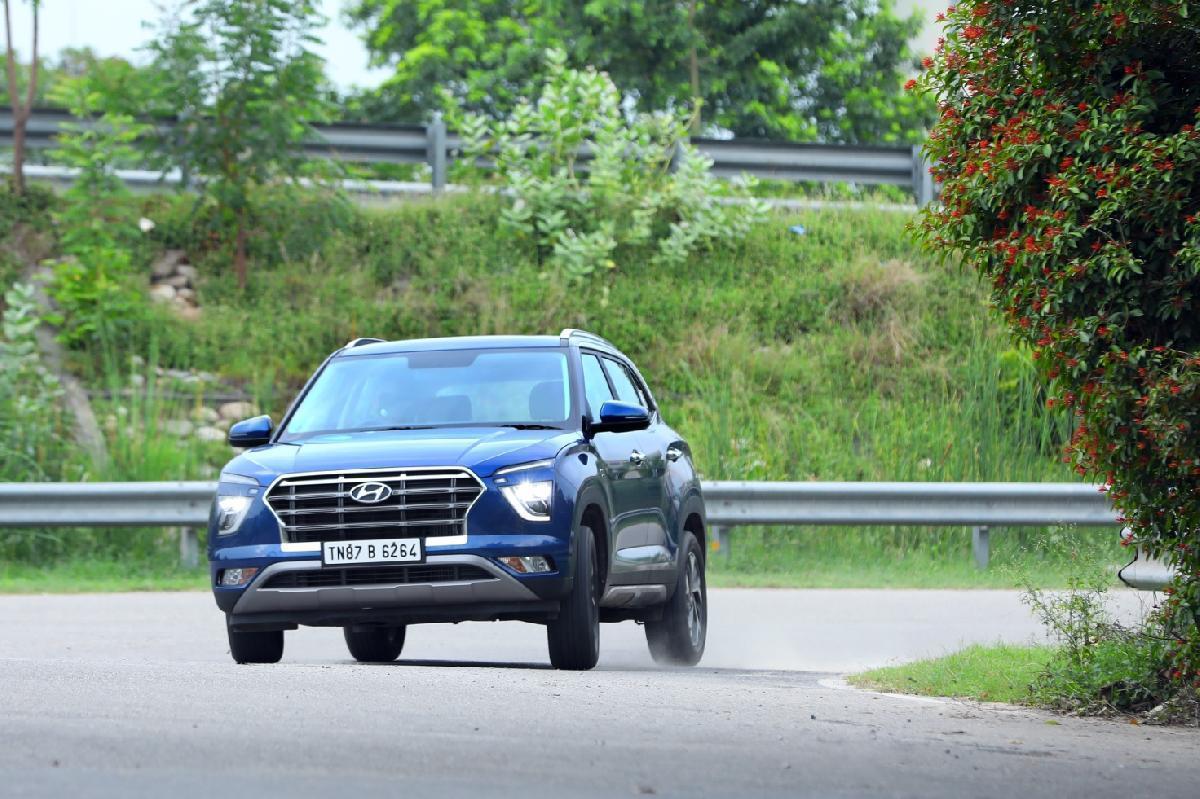 So, is the Creta justified to be crowned as the current best-selling SUV in the market and the king of its segment? Yes, as it does manage to tick a lot of boxes like features, comfort, safety, refinement, spacious cabin and maybe, just maybe, even looks. If you’re in the market for an SUV in this segment, it will be very difficult to overlook the Creta as it’s quite an all-rounder.