It’s time to put on your game face as the all-new Honda City CVT gears up to stamp its authority, but will the Hyundai Verna DCT play spoilsport? We find out if the City is still the benchmark in its segment.

Ever since Honda launched the City in 1998, not only was it a runaway success, but it was also the most coveted sedan, especially the VTEC trim which has now evolved into i-VTEC. The Hyundai Verna, on the other hand, didn’t get off to a flying start when it made its India debut in 2006. It was only in 2011 that the Korean manufacturer saw the wheel of fortune turn in its favour, when the second-generation Verna blazed onto the scene with its revolutionary ‘Fluidic’ design. Coming to the present day, the market has evolved further and the scenario has changed as there is a high demand for petrol automatic sedans now. So, we’ve decided to pit the naturally aspirated powered City CVT against the turbocharged Verna dual-clutch transmission to find out which one you should opt for. 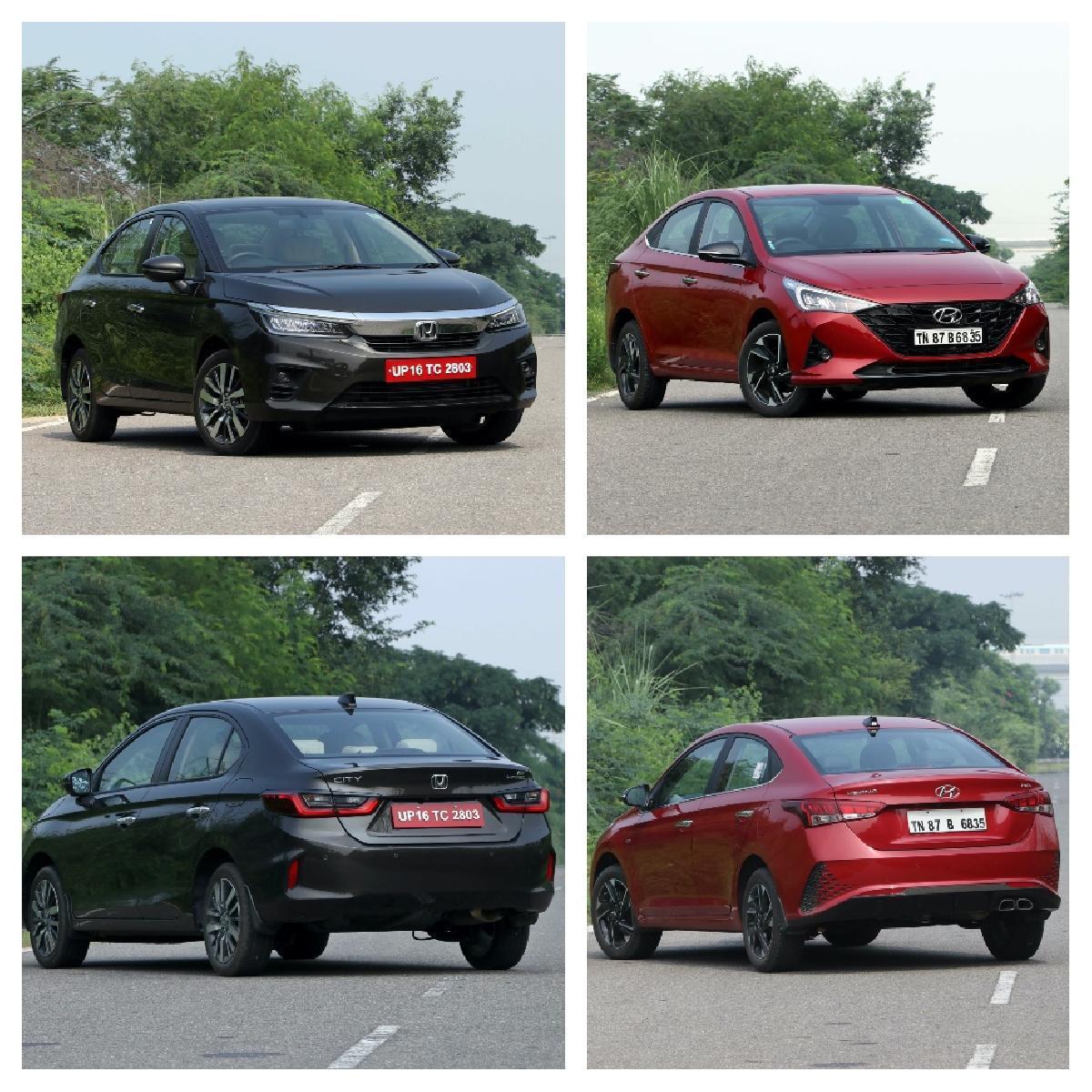 In terms of dimensions, the all-new City is bigger than the Verna and for a good reason too as the Honda is the longest and the widest sedan in its class. When it comes to styling, the rear looks more proportionate and well crafted. Both the full LED headlights and the Z-shaped LED tail lamps look stunning like a cluster of diamonds and gems. What works in the City’s favour is its timeless three-box sedan shape with a long sloping bonnet, swooping A and C pillars, which gives it an air of sophistication that makes it desirable for all age groups. 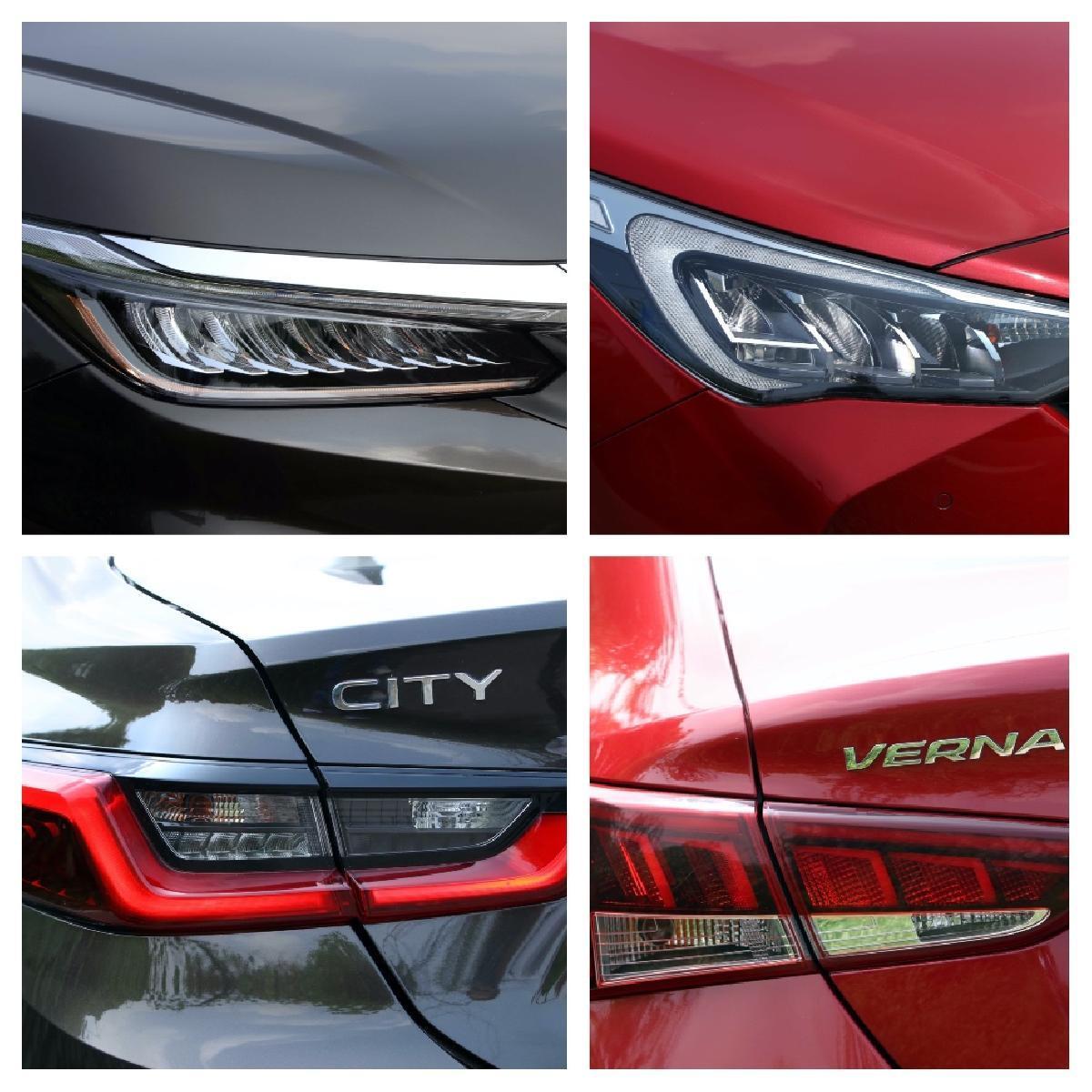 Even though the Verna is 109mm shorter than the City, it does manage to hold its own with its compact sporty stance. The most significant change one will notice is that Hyundai has removed the excessive chrome touches and has replaced it with an all-black finish, especially the front grille. It’s ‘don’t mess with me’ attitude, will score high points with young buyers. The swept-back headlamps, the wedge-shaped side profile along with a coupe-ish like C-pillar and stretched out LED rear lights ooze a lot of youthful energy along with resilience, but it’s just not for everyone as this is Verna’s sporty trim. So, it comes down to your personal choice, whether you prefer the elegant looking City or whether you prefer to paint the town red with the sassy Verna? 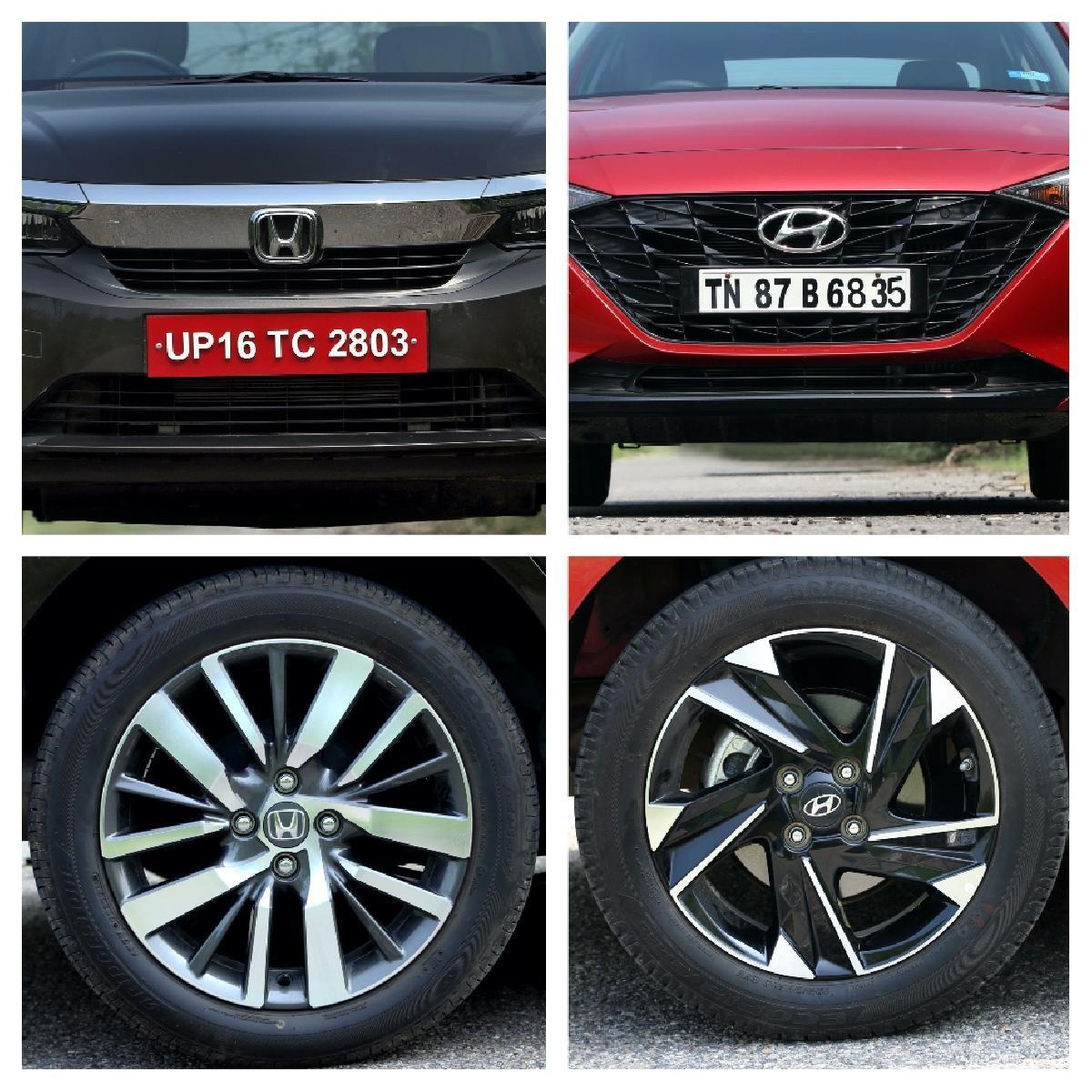 What do the two sedans offer inside? The City’s rear seat, as expected, offers acres of leg-and shoulder room. The headroom is more than sufficient even if you’re 6 feet in height. The seats are big and wide, while the back rest is supportive. Good news is that for a change, three adults can sit in the back row, but the only problem here is that the middle passenger will face limited legroom due to the centre console that houses the rear AC vents and two 12-volt sockets. Additional brownie points to the City when it comes to safety, the middle passenger gets a three-point seat belt. The driver’s seat offers a great vantage point as the vision is not obstructed from any angle, neither do the A-pillars create any blind spots. The City also gets a camera installed underneath the passenger side outside mirror, which ensures you get a clear view before you change lanes. The clean dual-tone dashboard sports an integrated 8-inch touchscreen unit along with a newly design climate control unit with aluminium polished dials which make a rich click sound. The City is also the first car in India to be connected with Amazon’s Alexa. All-in-all, the cabin feels a lot airier due to the predominantly beige interiors, has very comfortable seats, offers plenty of storage space, gets a new 7-inch digital instrument cluster which houses a G-Force meter, a first in the segment. It certainly looks like a lot is going for Honda, but then, taking the Verna lightly wouldn’t be a smart thing. 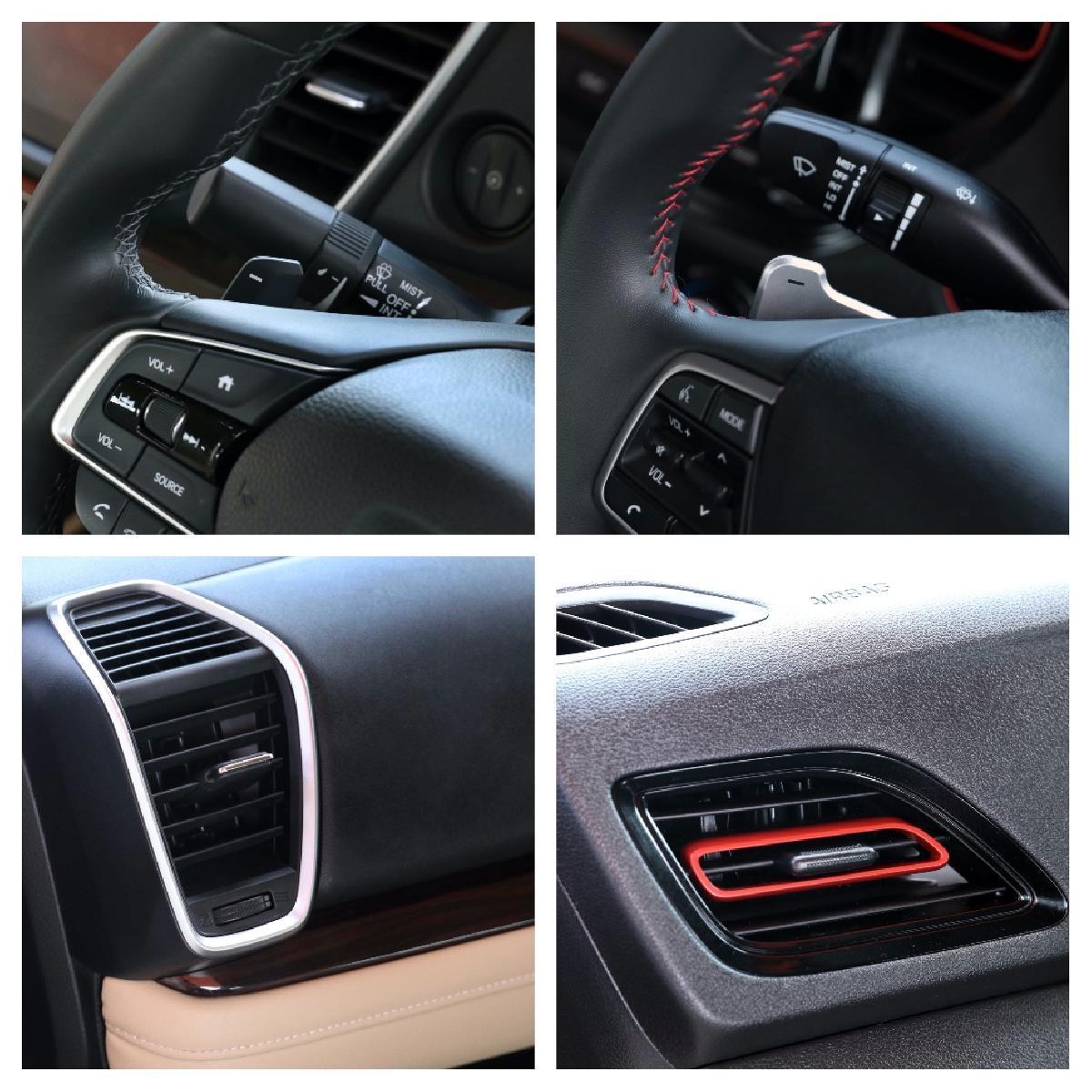 The rear space of the Verna has been and sadly continues to be its Achilles heel and the first thing we noticed while entering the cabin is its tight ingress and egress. While the seats feel like a pair of slim-fit jeans with snug side bolsters, the backrest pampers you and the angular seat squab offers a decent under-thigh support. But after a while the cabin starts constraining you because of the front seat being close to your knees, drastically reducing your legroom, the swooping roofline eats into the headroom and as this is the sporty turbo variant, the black interiors start playing tricks on you as you feel the cabin is a lot smaller than it actually is. Due credit to Hyundai for the all-black upholstery with red switching on the seats and the steering wheel. It's a class touch. Like the City, the Verna too sports an 8-inch infotainment system, but it is equipped with its in-house BlueLink connectivity features. The display is more vibrant and intuitive than the City’s, but where Verna scores more points is with its practical comfort features like a wireless phone charger, which honestly, should now be a standard feature in all the vehicles in this segment, and of course, the ventilated front seats. 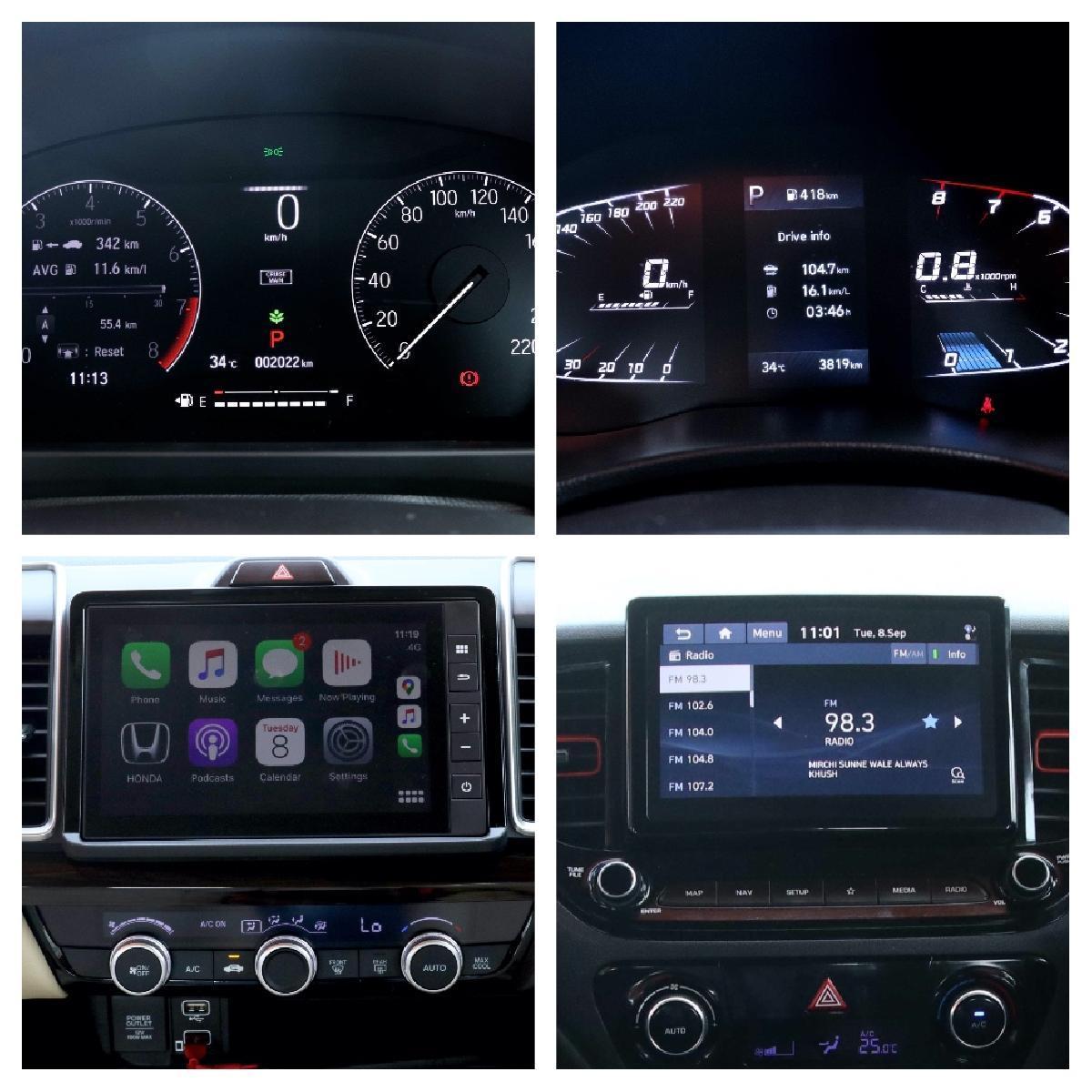 Both the sedans come fully loaded and get a sunroof, retractable sun blinds in the rear, offer six airbags and a long list of safety features but in terms of quality and leather finish, the City feels a notch above its competition even though Verna feels more durable. 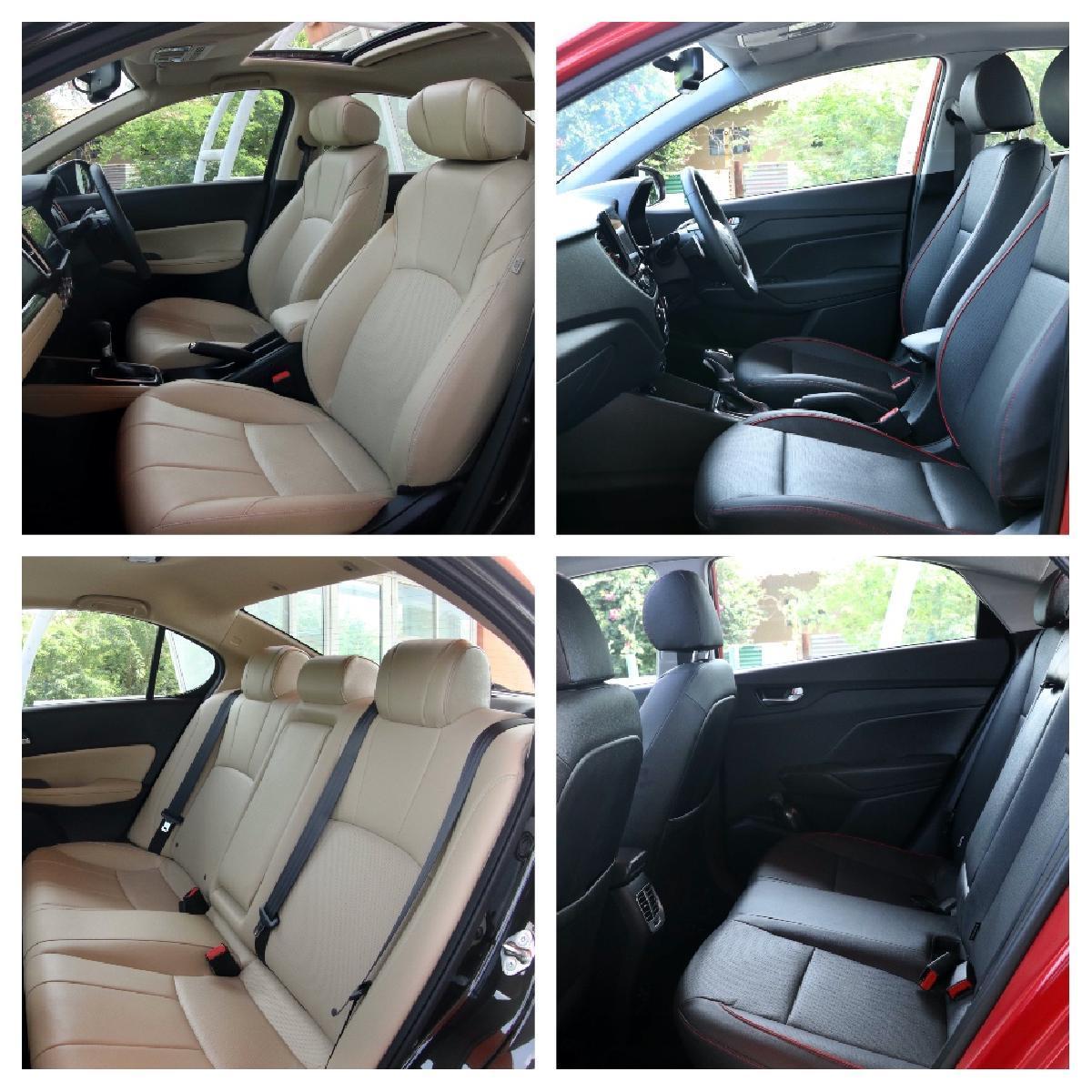 Next, we saw how the two behaved on the road. We drove the City first as we were quite excited to drive the new 119bhp dual-overhead-camshaft 1.5-litre motor. As it’s a naturally aspirated petrol engine, it’s quite responsive at low-end performance making it a breeze to drive in urban conditions. The mid-range, around 3,000-4,500rpm, is where the engine settles down and switches to cruise control, but once the rev needle starts inching towards the 5,000rpm mark, the power surge can be felt as it launches itself all the way to 6,500rpm mark. The engine is a gem and it’s ideal for both the city and the highway. One can’t forget the new 7-step CVT automatic transmission, which is quite eager to upshift barring at low speeds where it holds the gear longer than it is needed, making the engine rev high, but once on the move, one can easily mistake this automatic gearbox for a torque converter. Honda, though, could have further improved the cabin insulation level as both the engine and the outside noise is quite audible.

The City continues to offer a relaxed stress-free ride due to softer suspension set up. This allows it to cushion dumps on the road flawlessly but in hindsight, the weight and dimensions of the car can be felt while negotiating sharp turns. This doesn’t mean that you start doubting the car’s abilities as the well-weighted steering wheel does offer some feedback and makes you feel in total control. 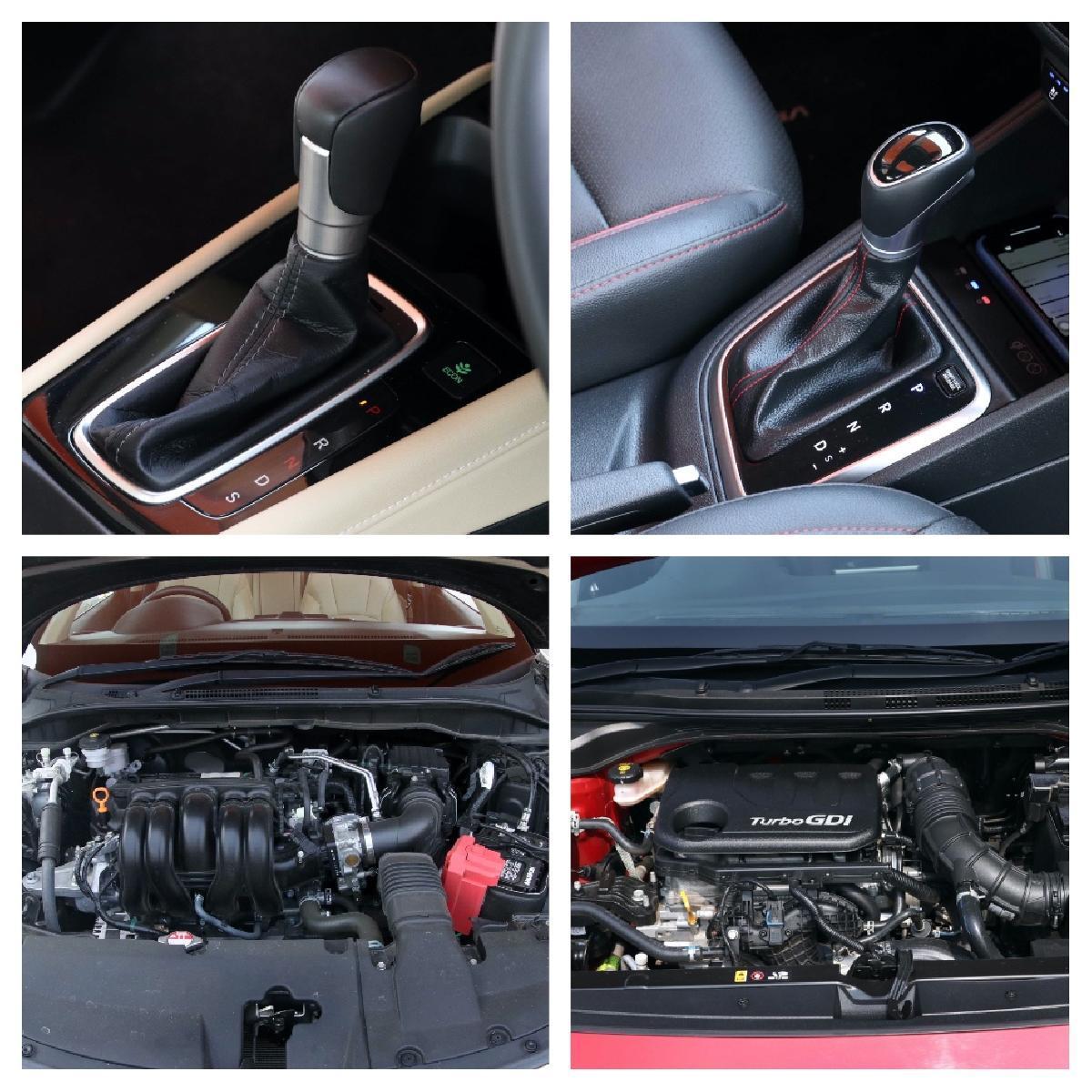 Hyundai, on the other hand, decided to downsize its powertrain with a 118bhp 1-litre turbo petrol, which is mated to a 7-speed dual-clutch transmission. So, on paper, both offer neck to neck power output and paddle shifters, but the powertrains’ nature is like chalk-and-cheese. The Hyundai motor is refined, borderline silent, but a gentle turbo lag can be felt as its initial response is linear. Things change once the turbo kicks in, which can be felt in the mid-range power band and the engine starts to feel more eager though it’s not as free-revving as one would have hoped. The DCT shifts gears effortlessly, but when the car is driven aggressively, the transmission tends to take a pause before it upshifts. But this can somewhat be negated with the help of the paddle shifters.

While the Verna certainly handles better than the City and manages to hold its line while attacking corners, body roll can be felt. The Verna’s suspension set up is slightly firm as compared to the City and this does translate into ride comfort, especially for the rear passengers. It can tackle minor ditches, but it’s the potholes that one has to be conscious of. 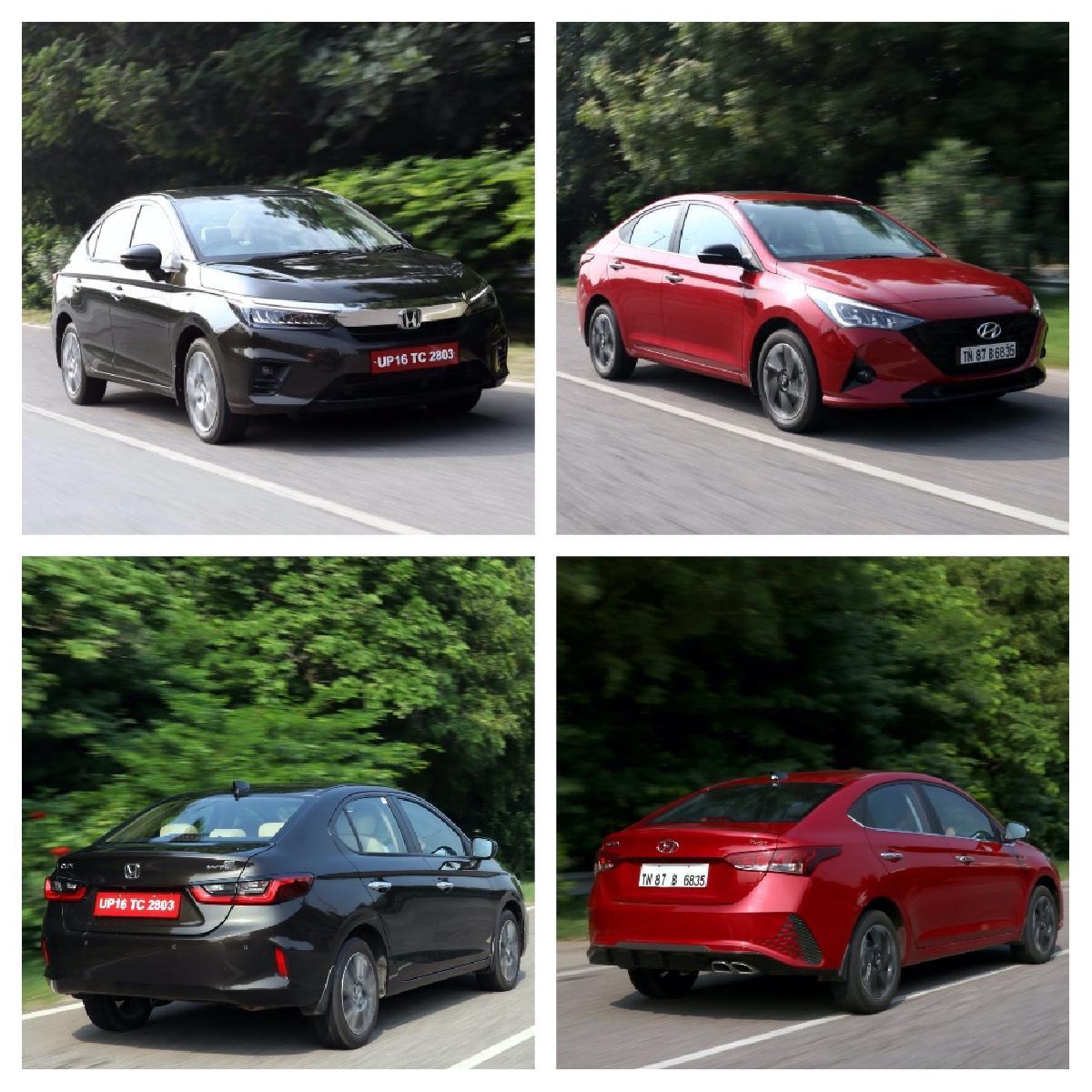 So, what’s the verdict? 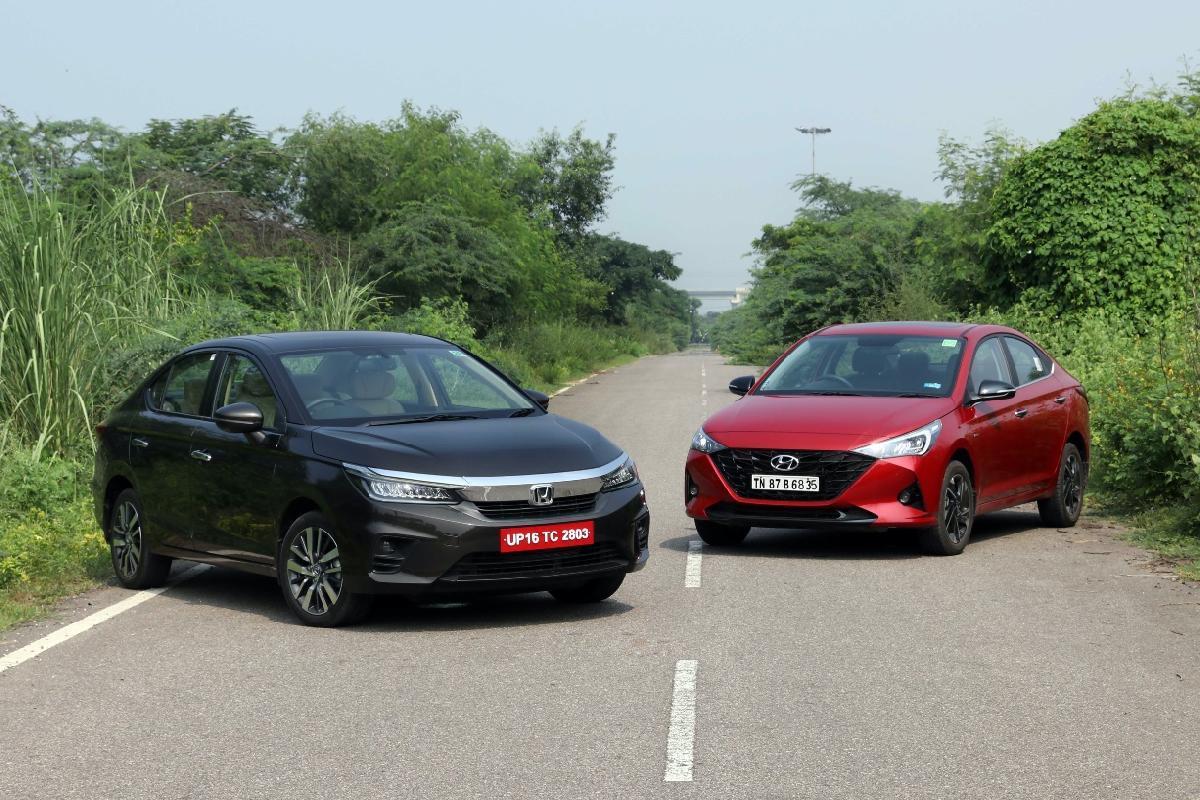 The Honda City manages to nudge ahead purely based on the spacious and comfortable cabin, it feels more luxurious, has a well-rounded engine and now, the CVT does not hold back the car in terms of performance. The Verna has a refined motor, a DCT transmission, all-four-disc brakes, but the City is a more balanced sedan and remains the benchmark in many ways in the segment.