Not just luxury and sophistication, the new Range Rover Evoque, is big on power and performance too

The new Range Rover Evoque is luxurious, sophisticated, and a hoot to drive! The engineering and design teams who have spent millions of man hours designing and building the new Range Rover Evoque have ensured that it remains true to its core British values of restrained design while delivering wholeheartedly in terms of its capabilities so that it does exactly what it is meant to do, which is drive its owners wherever their heart desires, with the assuredness of the Rangie’s reliability, and that too in superlative style.

The Range Rover Evoque which competes with Mercedes-Benz GLC, Volvo XC60, Audi Q5 and BMW X3 is very similar to its older sibling, the Range Rover Velar, in terms of its exterior design, albeit, boasts slightly smaller proportions. Don’t believe us? Take a look at the front grille and you will know exactly what we’re talking about. A couple of years back, when we drove the newly-introduced, Range Rover Velar, we called it “A work of Art” and carrying that legacy forward is this new Range Rover Evoque, with its beautiful minimalistic exterior design that features extremely clean lines giving the SUV a very modern yet futuristic appearance. 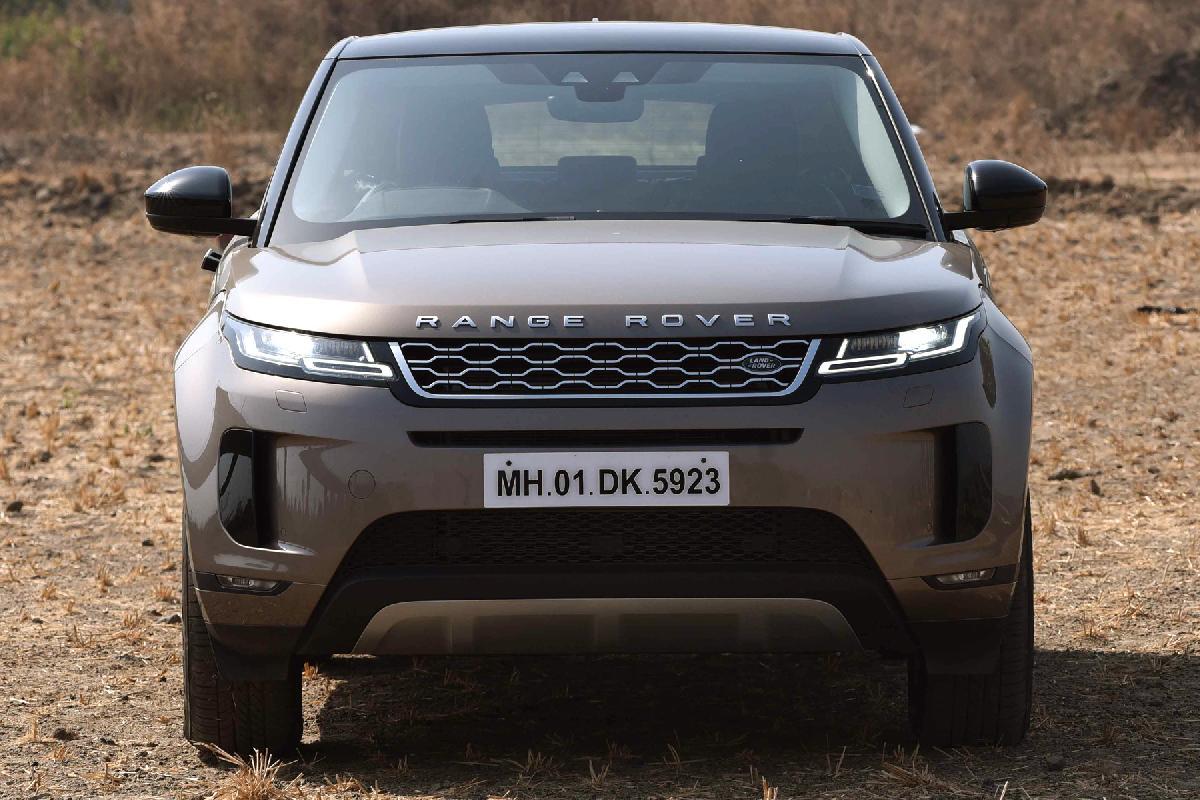 You’ll really appreciate its sparse yet tasteful design execution when you see how there are no deliberate attempts at adding big, bulky bulges or flares to the design, merely to make the SUV look more macho. Pure clean lines on the exterior body do the job while the Evoque’s coupe-like silhouette, distinctive roofline, and tapering window line tell you from afar that it is Evoque. The Evoque also gets Velar-like signature LED DRLs, (Daytime Running Lights), which look really elegant. I particularly liked the fog lamp trim that sits below the vertical air intake on the front bumper which blends in rather nicely with the SUV’s overall exterior design, not to mention the large wheels which further add to its appeal. Another design touch that I really liked on the Evoque was the introduction of flush deployable door handles. Press the unlock button on the key fob and the front door handles slide out, press it again and the rear door handles slide out. The manner in which this mechanism has been so neatly integrated into the door panels is really fascinating and does not in any way take away from the exterior design of the Evoque. 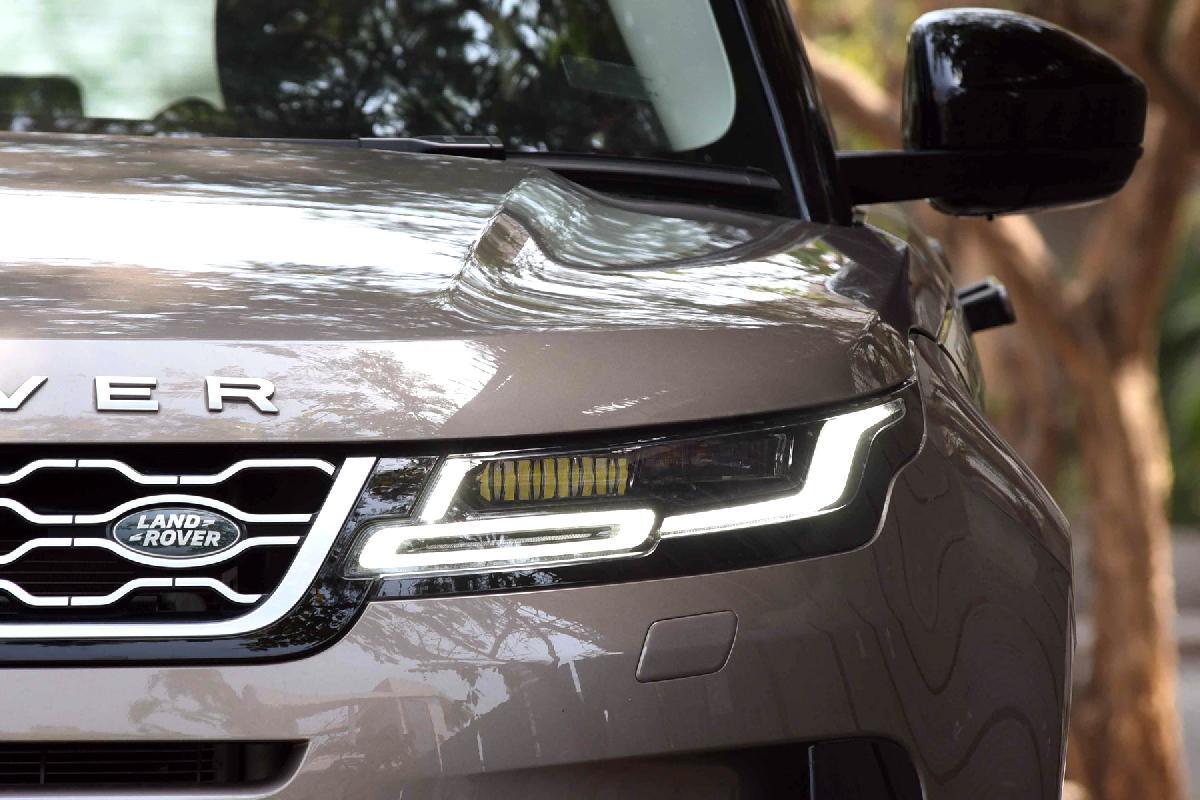 The SUV also gets brand new interiors as compared to the outgoing model along with a host of the latest technological features. 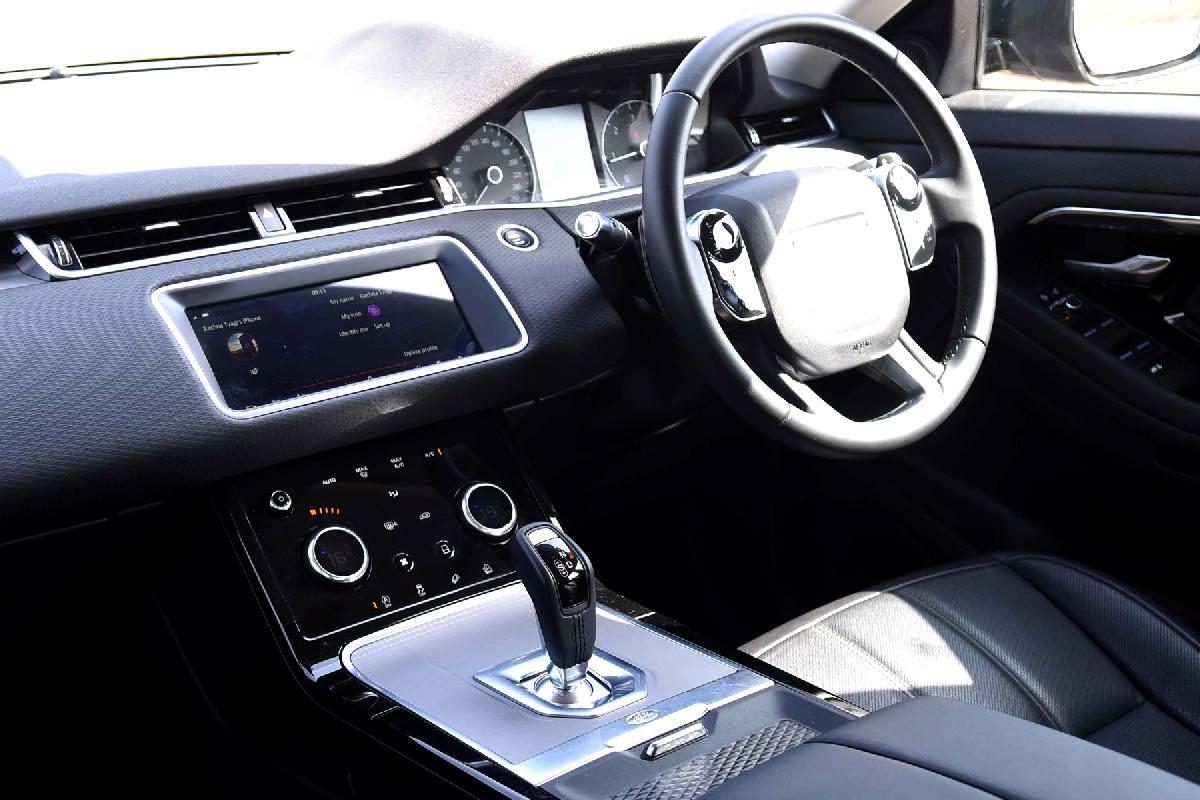 There are black leather seats and as we all know, black leather has always been associated with supreme luxury and premium-ness, but it must be said here that, the Evoque’s cabin does look a bit subdued because of it. (Perhaps tan or beige-coloured leather seats could be an option to brighten up the cabin a bit more.) 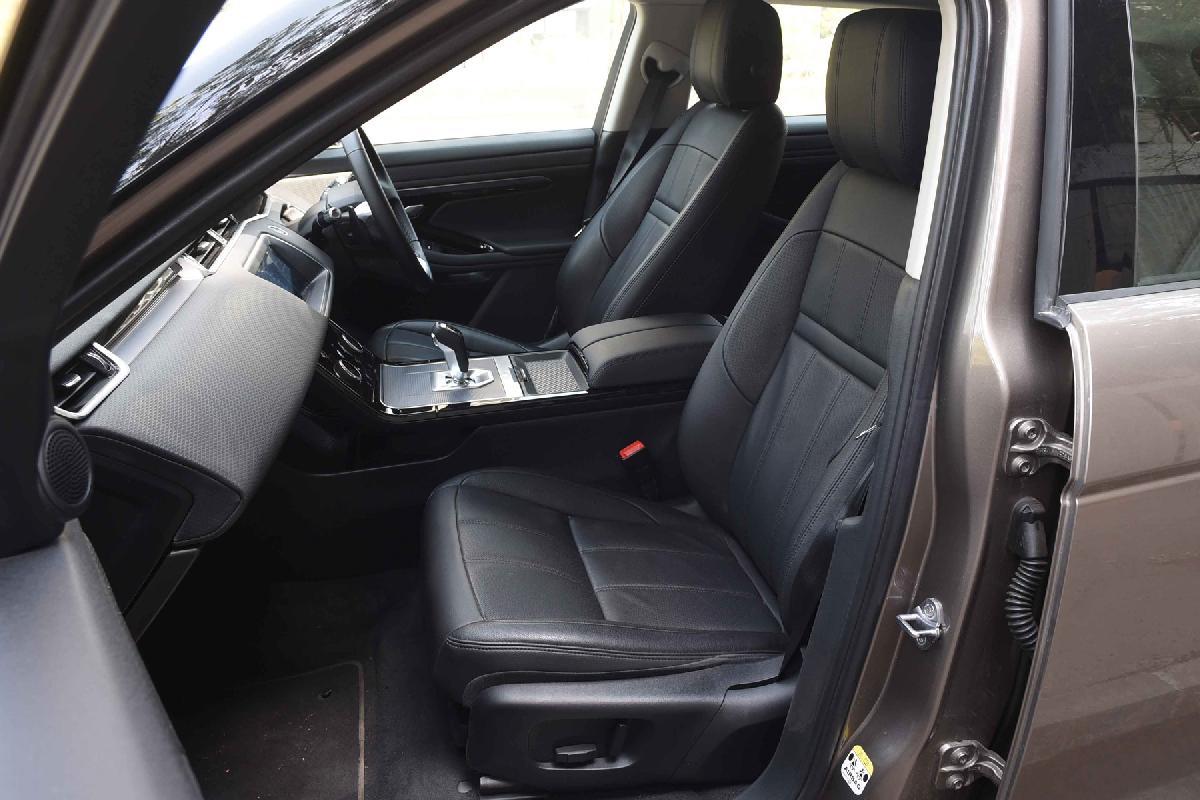 However, it is the Evoque’s uncluttered dash design which is extremely impressive and more than makes up for other niggles, if you can even call them that. The dash consists of a combination of hard plastics and soft-touch materials which you can see on its surface along with a unique textured design and uses elegant brushed aluminum inserts that give the dash a sophisticated look. Add to that a panel in piano black on the center console which further elevates its look. 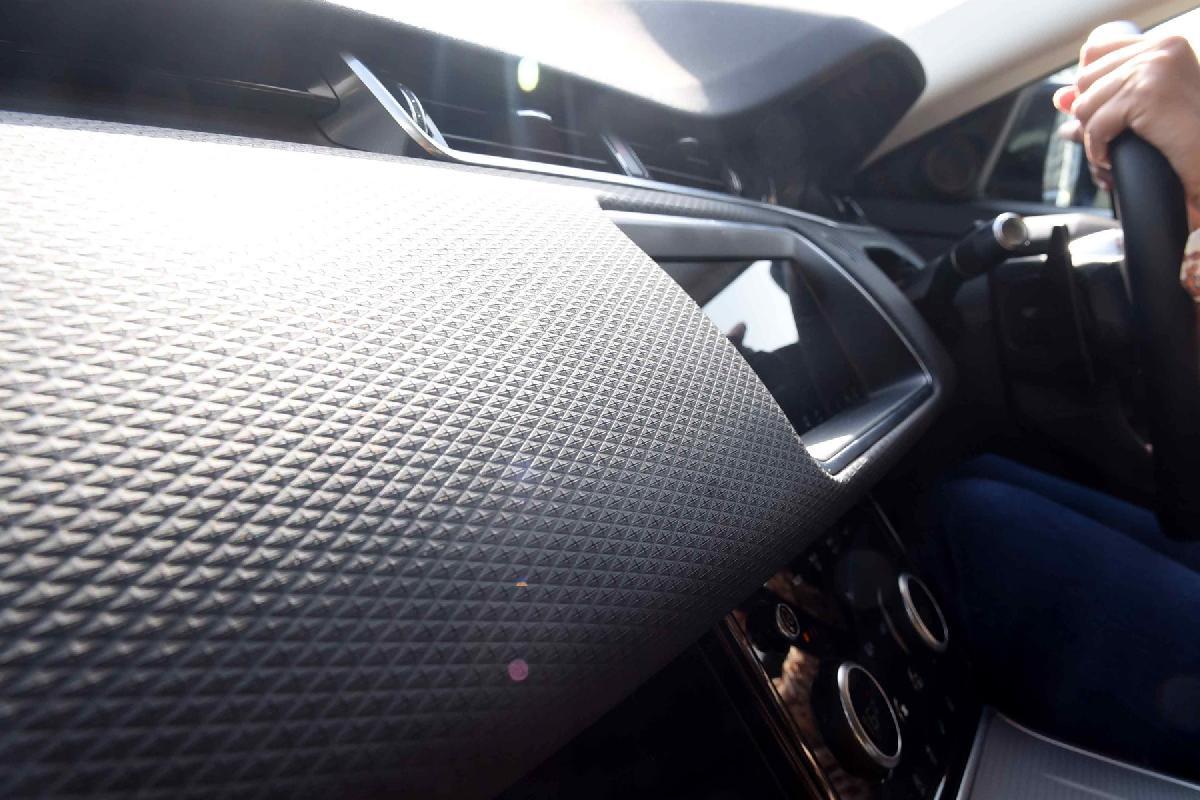 I was expecting the Instrument cluster with its interactive driver display to be a little snazzier, but having said that, the present one, I must say, is still a very well-designed one that offers plenty of driver information and active safety data at a glance without having to squint your eyes for the readings. The Evoque has a meaty leather-wrapped steering which can be adjusted for height and reach and gets sturdy stalks with brushed aluminum tips – an elegant design touch. 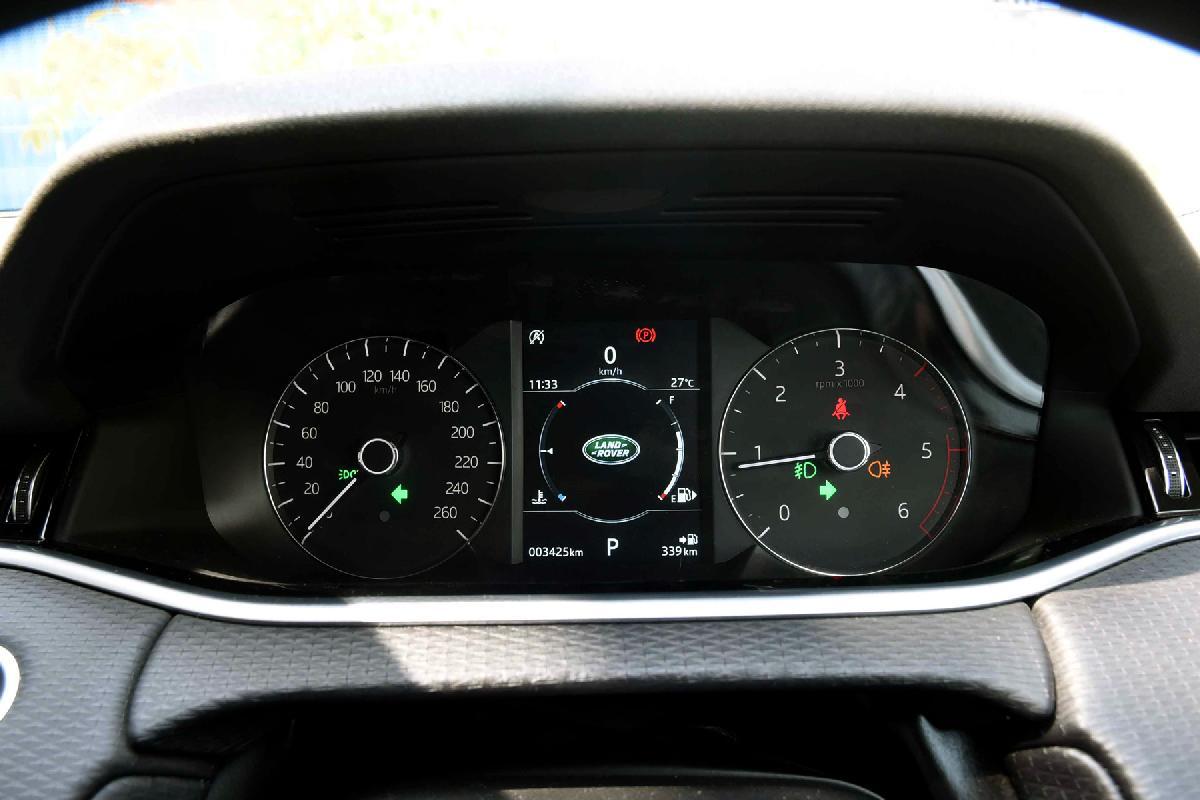 The Evoque also gets a beautifully integrated, 10-inch touchscreen infotainment system in the center console, with a brushed aluminum bezel that comes with some hi-res graphics and is pretty responsive too. Besides, there are six speakers for audiophiles to make the most of their commutes or for those cross-country drives. Below this infotainment system sits another solid black panel of well-designed buttons and knobs like the one used for two-zone climate control, for instance. Yes, it is a bit of a finger print magnet but the buttons are really well-sized for people with large hands, and that is indeed thoughtful, especially while speeding, lest you accidentally press the wrong buttons. However, the possibility of doing that is also remote as the dash and the center console is clutter free and there are no array of extra knobs and buttons just for the heck of it. Everything has been designed with a purpose.

There is a twin-lid central arm rest but personally, I wish it didn’t split down the center, as I find lifting a larger and chunkier lid easier than a slim one to throw in knick-knacks but then that’s just me. There is also a small tray which comes with a textured mat atop of which you can place your cell phone but I did find myself wishing that it came with wireless charging instead.

It must be said here that though black-coloured leather on the seats may not appeal to everybody, the seats, which are electrically powered, are firm and offer good shoulder and thigh support, and the headrest too is big enough almost giving the feeling that tit is built to last a lifetime. The rear seats are slightly upright but even though you sit slightly low you’re not uncomfortable at any point in time. The presence of a transmission tunnel at the back makes it a tad bit uncomfortable for the middle seat passenger and so it is best that only four occupants enjoy the Evoque to its fullest without nudging each other for space. The rear seats also get ac vents along with four 5V charging points, two next to the ac vents and two at the back of the front seats. There is also one 12v charging point provided for your electronic devices. Besides there is also a beautiful moonroof for natural light. Besides, the boot offers upto 1383 liters of luggage space and with a combination of 40:20:40 rear bench, it does turn out to be a very versatile vehicle. It also comes with a powered tailgate mechanism which makes it a rather handy addition. 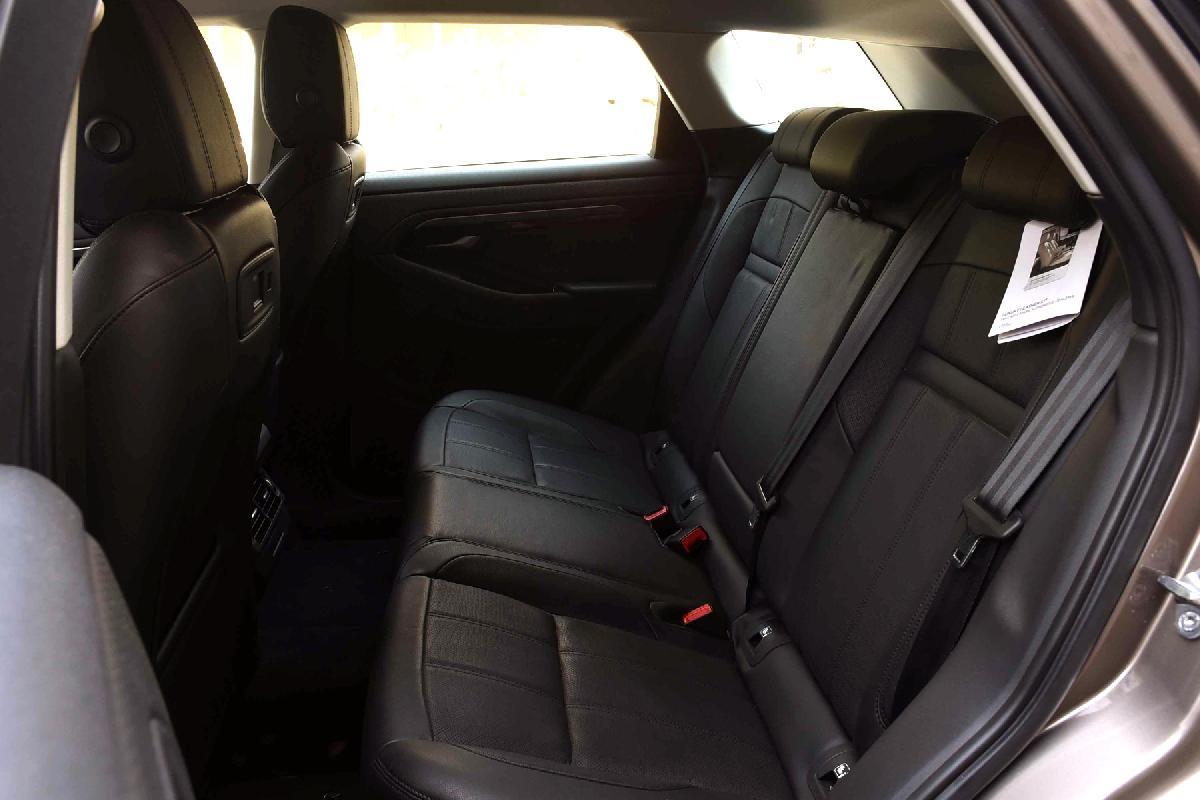 The Range Rover Evoque is based on the Premium Transverse architecture, which is their new platform and has engines from the Ingenium family, consisting of modular four-cylinder turbocharged engines. We drove the Range Rover Evoque D180 S and came away mighty impressed. Available with the new BS-VI 2.0-Liter engines, in both petrol and diesel options, they’re both mated to a beautiful and super-efficient 9-Speed automatic gearbox which has been borrowed from the Jaguar. While the petrol belts out 247 bhp and 365 Nm of torque, our Evoque was a rev-happy engine that belted out 178 bhp and 430 Nm of torque and provided for pure, unadulterated driving pleasure. I really did have a great time driving this spirited SUV in different modes. While driving in ‘Eco’ and ‘Comfort’ mode made for sufficiently relaxed driving, the most fun was had when I switched to ‘Sport’ mode. The Evoque is undoubtedly an SUV that will serve you well whether you want to race up a hill, drive on rocky terrain, wade through water, (it boasts a wading capacity of 600m) or just indulge in miles and miles of straight-line driving. In fact, the power delivery is both, brisk and linear, and you will find yourself flying when seated behind the wheel of this incredibly torquey SUV which handles exceptionally well. 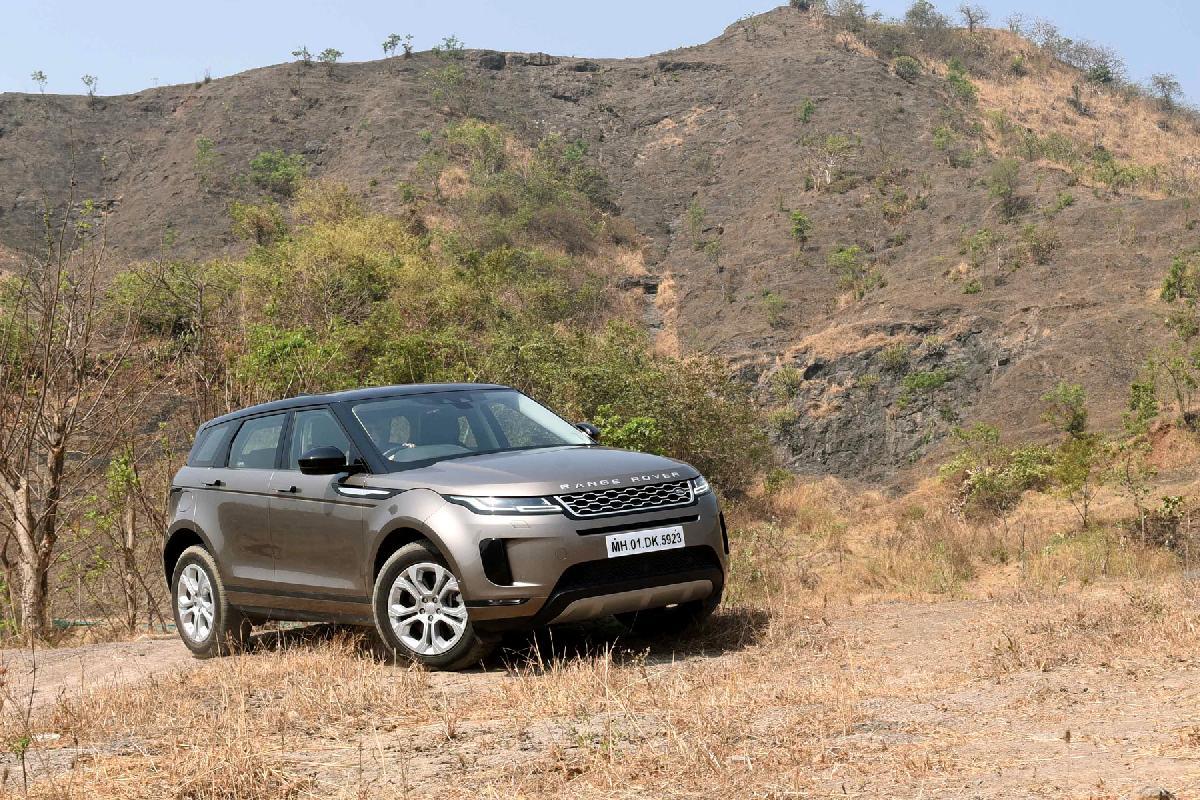 Yes, there is that slight hint of engine noise and engine vibration that can be slightly felt, but overall the NVH levels have been remarkably well-contained on the new Evoque which just glides smoothly over potholes. In fact, this needs a special mention. The way the Evoque soaked up potholes all along is nothing short of extraordinary and is definitely one of the finest SUVs out there to do so with such incredible finesse. The steering is precise, does, what it is commanded to do and the brakes are incredible, offering enough bite even for immediate stopping situations. I pushed the Evoque up some difficult terrain to better understand its capabilities and mechanical prowess and thanks to its suspension settings and tyres, I’m happy to report, it did incredibly well, offering excellent ride quality and grip throughout, not once giving me jitters or any anxious moments. 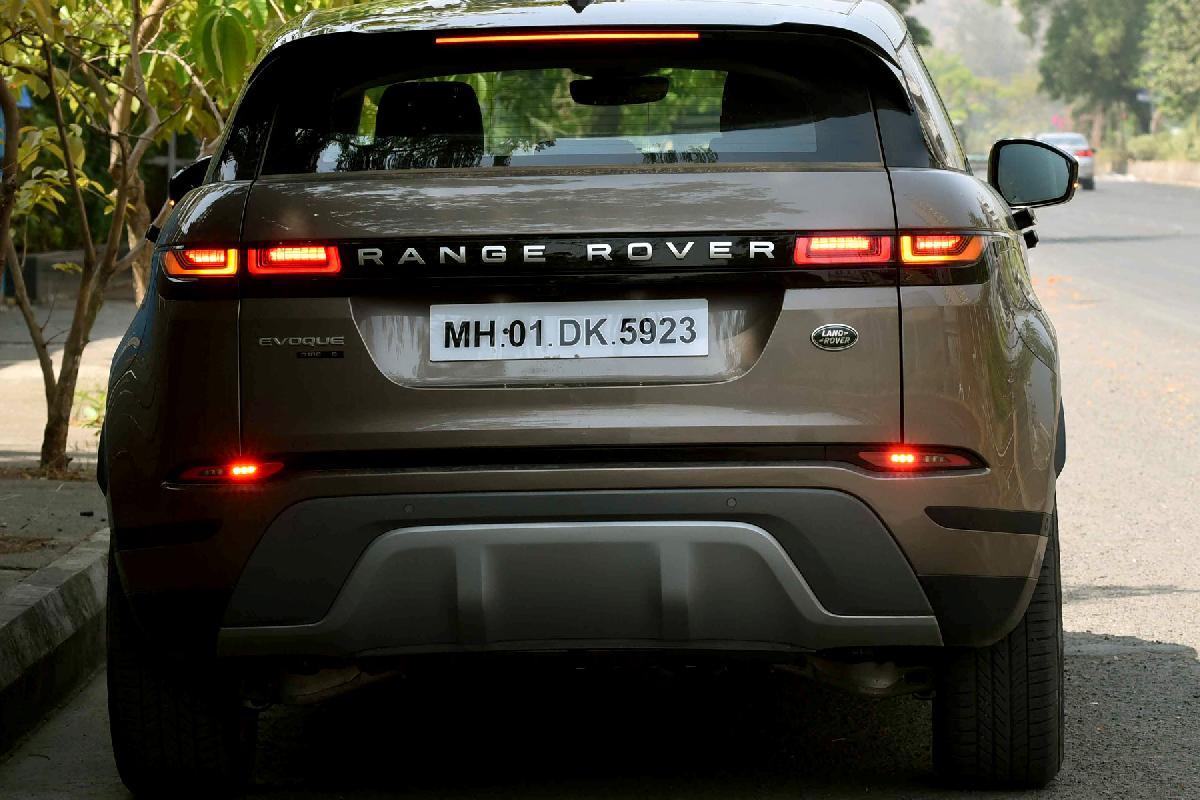 The new Range Rover Evoque handles exceptionally well when it comes to overall performance and has in fact, far exceeded my expectations. With several safety features on offer such as Airbags, Dynamic Stability Control and Emergency Brake Assist, the Range Rover Evoque which is priced at 54.94 Lakh (Ex-Showroom) does make a strong case for itself. If you are looking for something that is not as expensive as the Velar and slightly smaller, this should be well worth your money and style. It is powerful, it is rugged, it is smart, and most importantly, it will never look out of place whether you take it to the Himalayas or that exclusive party in your tux. It is a vehicle that is adept at being at ease in all kinds of surroundings and before long, you too will realize that you were so darned right in choosing the new Range Rover Evoque.