Hyundai wants to change the hatchback market with the state-of- the-art new i20. Will the buyers shy away from its premium pricing or is this exactly what the doctor ordered? We find out.

The premium hatchback class can be quite a tricky place as it’s sandwiched between the sub-4-meter sedan and the very popular compact SUV segments, especially when the prices overlap each other. Now, competition within a brand is not something many would say is the recipe for success, but with a healthy 27% of the market share at stake, one can’t ignore this segment. Like they say, ‘a little competition never hurt anyone.’ Now, Hyundai has decided to drive in the third generation i20, which is priced on the higher side and is dangerously close to the Venue. Nevertheless, the Korean manufacturer remains confident and insists that comparing the two would be unfair as the buyers’ requirements for the two are completely different.

In typical Hyundai fashion, the all-new i20 gets more pizzazz and tonnes of features, but there's even more than what meets the eye. Hyundai, known to create its own new design statement rather than follow the current trends has ensured that with the new i20 it is no different. With a low sloping bonnet, prominent creases running in the middle, all-black aggressive front grille and with swept-back projector LED headlamps with LED DRLs, the i20 is a top contender when it comes to premium hatchbacks. 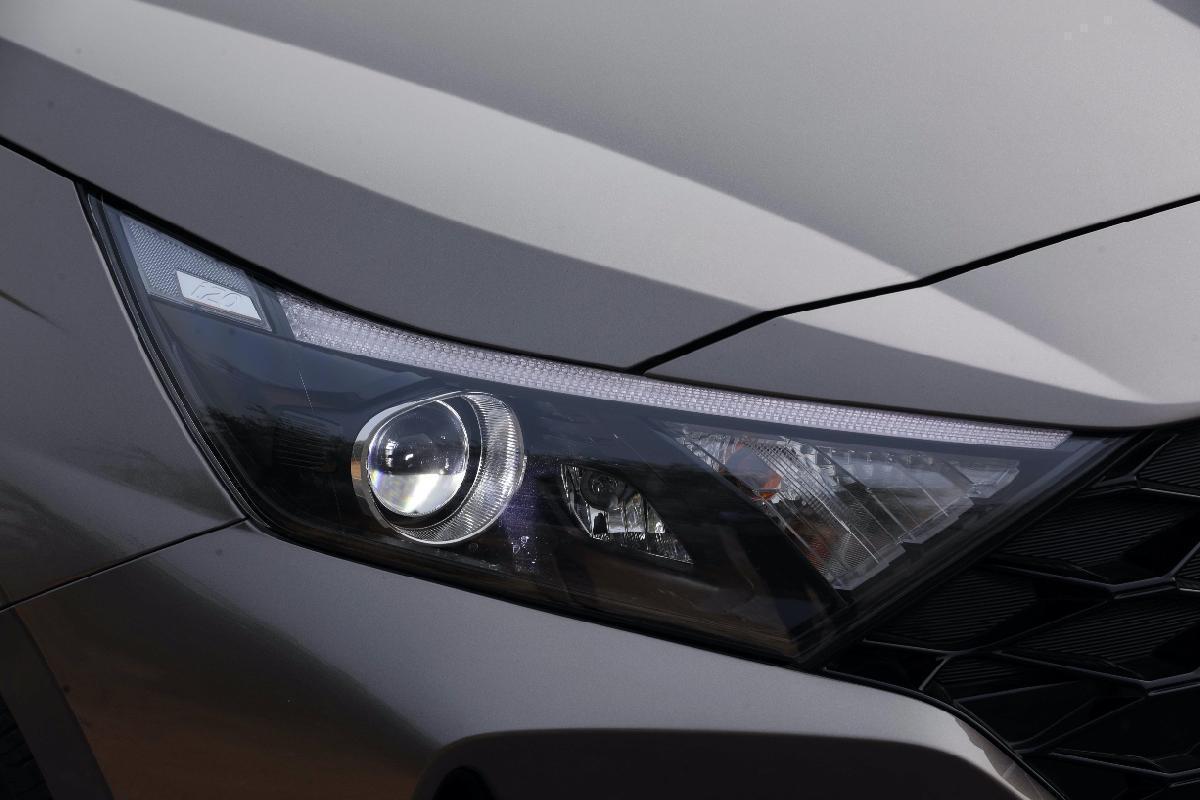 What’s even more impressive is the way Hyundai has used chrome elements on the window sills, C-pillar’s quarter glass, door handles and a chrome band running in between the eye-catching Z-shaped rear LED lights. The unique dual-tone boot, additional character lines on the side profile and chunkier bumpers ensure that the i20 truly stands out in the crowd. 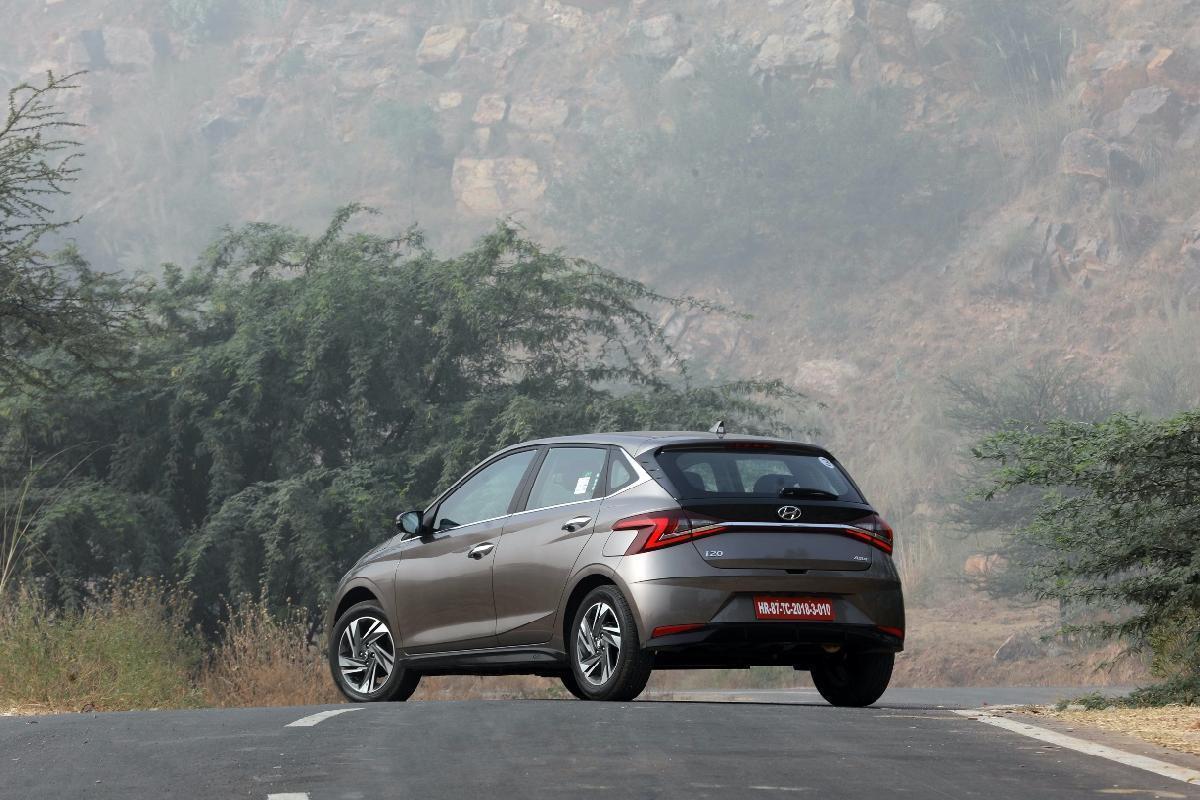 Even though the new i20 has an identical ground clearance of 170mm like the previous generation model, it is based on a brand-new K-platform, which is around 100kg lighter and has a more rigid body structure.

As the new i20 is longer and wider, in terms of dimensions, this can be felt inside the cabin as it offers more shoulder room and class-leading legroom for the rear passengers. Even though the i20 now only comes in an all-black cabin, it feels airy and spacious thanks to a wider front and rear windshield along with the rear quarter glass. 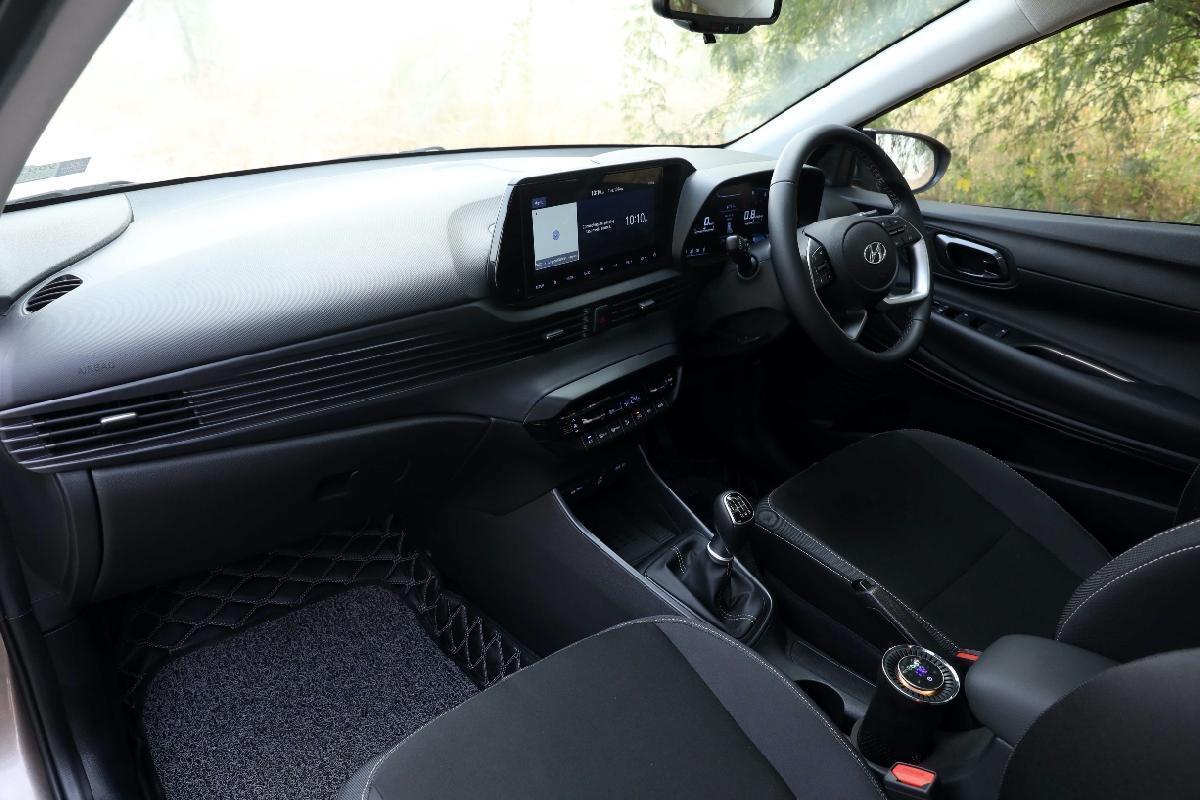 Hyundai had kept rear passengers’ comfort as an utmost priority and therefore, the new i20 bench offers an accommodating angular backrest with a cushy seat squab with good thigh support, which is a rare trait in most hatchbacks. 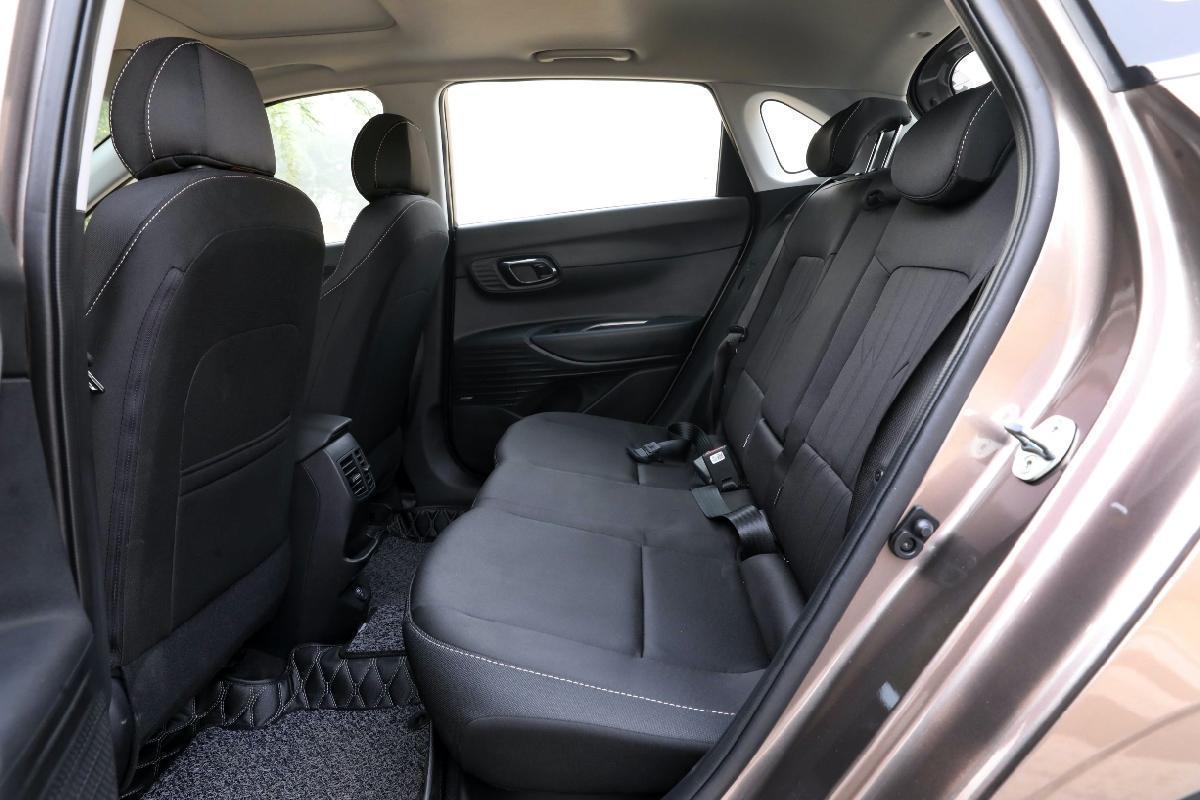 In the cabin, Hyundai has opted for a clean and uncluttered dashboard with only horizontal design lines which look like the ac vents and climate control display and buttons. It boasts of a 10.25-inch floating infotainment touchscreen with navigation, which is the largest in the segment. The screen is very intuitive and offers plenty of connectivity options like Android Auto, Apple CarPlay, Blue Link technology that offers 50 features including OTA map updates, a first in the segment. 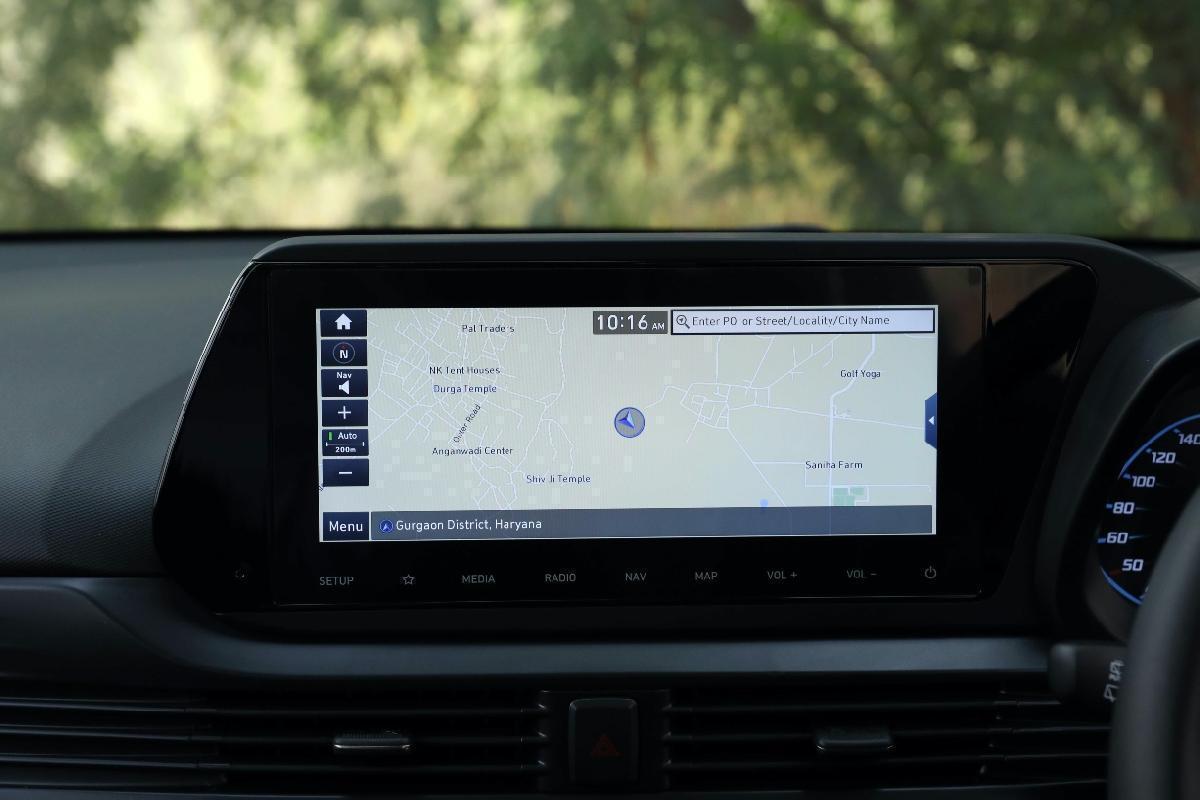 It also gets a 4.2-inch all-digital instrument cluster like the Verna and it comes with a tyre pressure monitoring system. Like any other Hyundai vehicle, the i20 is loaded with features like wireless phone charger with a cooling pad, an air purifier, 7 speaker Bose system including an amplifier and a subwoofer and the much popular sunroof. The fit-and-finish is virtually flawless, but the plastic quality could have been better and the use of soft plastic could have certainly made it plush.

Hyundai has increased the i20’s boot space to 311 litres, which is 26 litres more than the previous generation, but when compared to its competition, the space remains fairly average. 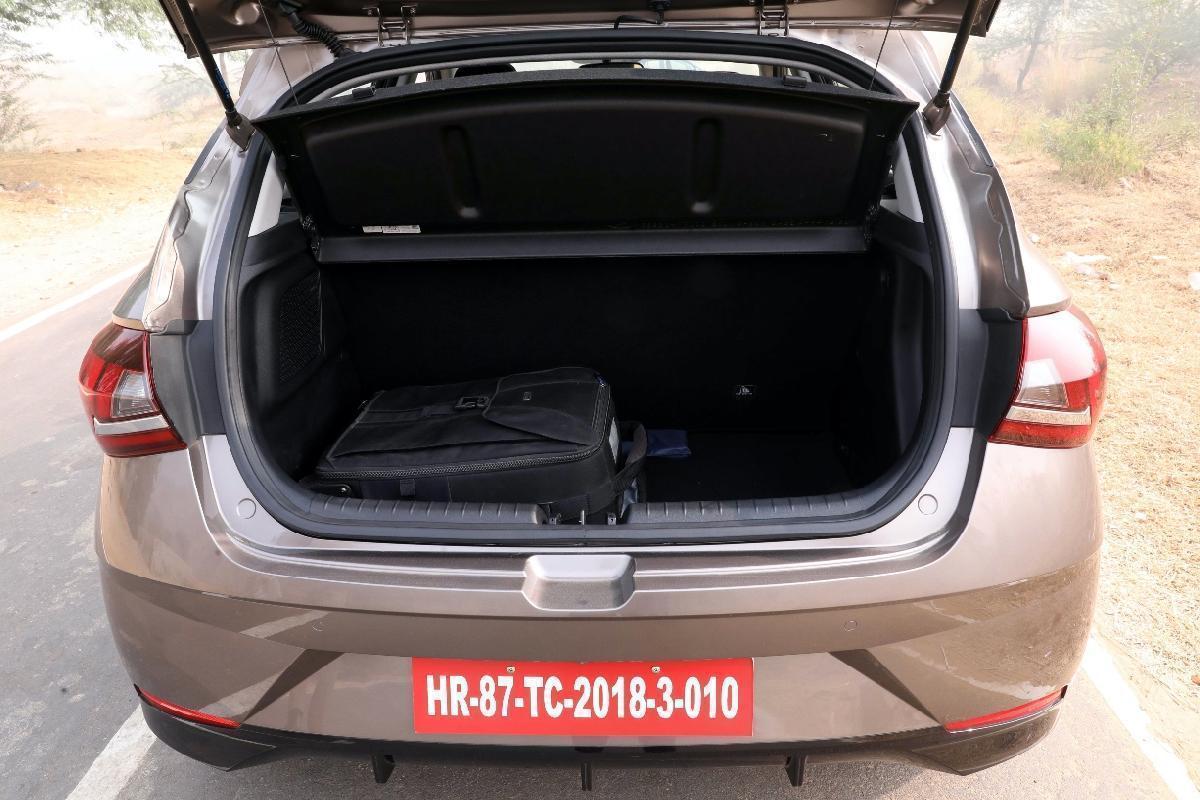 The new i20 is available in three engine options. Hyundai has updated its tried-and-tested 1.2 Kappa petrol engine and it comes in both CVT automatic and a 5-speed manual gearbox. The former churns out 87bhp while the latter has 82bhp of power output. But we test drove the most powerful hatchback in the segment the 118bhp 1-litre turbo petrol mated to a 7-speed dual-clutch transmission and the 99bhp 1.5-litre diesel, which comes with a 6-speed manual.

We fire up the diesel engine and to our surprise after the initial mild engine clatter, it is barely audible in the cabin. A gentle press of the accelerator has the motor responding in a linear fashion. The i20 pulls away effortlessly at low speed, but the icing on the cake is the lack of turbo lag because the torque kicks in early. You can change the gears at as low as 1,500rpm and it will continue to offer plenty of power but in a smooth and a refined manner. The diesel engine murmur begins to creep into the cabin once the needle crosses the 4,000rpm mark, but it's still fairly low in decibels and doesn't make you want to reach for earplugs or increase the volume level of the Bose music system. 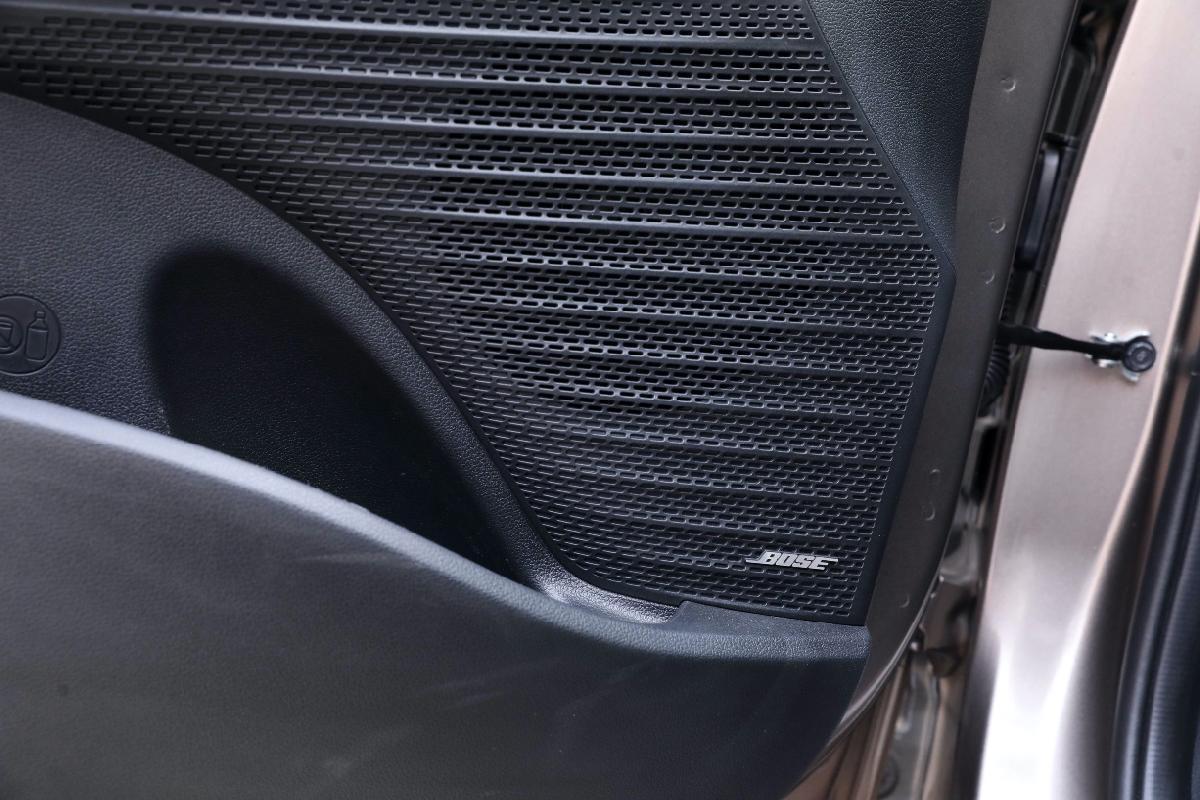 As comfortable as it is in slow-moving traffic, the i20 remained stable and confident on the highway, especially when it crosses the three-figure mark. This is when we realised how well the cabin was insulated as barely any road-wind or even engine noise could be heard.

Switching to the sporty turbo petrol, we noticed that Hyundai has tuned this motor to try and balance both, power and fuel efficiency. Even though at slow speeds the turbo lag could be felt, it lets you cruise in bumper-to-bumper traffic at your own pace. Once the engine crosses the 2,000rpm mark its free-spirit nature kicks in and the gear shifts in the 7-speed automatic happen more quickly. The midrange power band is where the turbo petrol mill is the happiest as the power tends to taper off once it crosses 6,000rpm mark. Unlike the German dual-clutch gearbox, this one doesn’t downshift as quickly as one would like. Also, keeping in mind that this is a 3-cylinder motor, it does tend to be audible when you put the pedal to the metal.

With the top-of-the-line 1-litre turbo petrol and the 1.5-litre diesel variants costing INR 11.33 Lakhs and INR 10.75 Lakhs respectively, (Ex-showroom Delhi), are they worth the premium price tag? In one word, yes, but let’s break it down so that you can weigh the pros and cons. At that price, what you get is a fully loaded hatchback with plenty of space, equipped with features that most vehicles in higher segments don’t offer. You also get refined and fuel-efficient engines and a hatch with road presence. 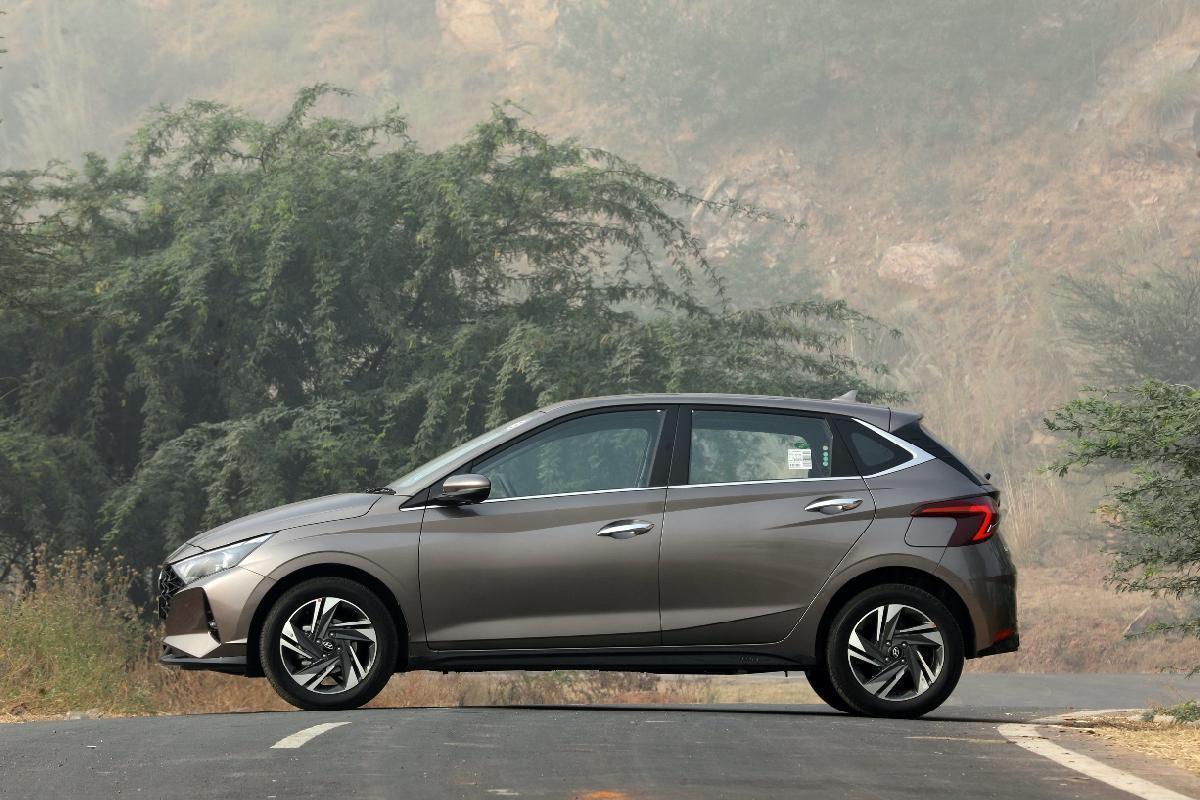 The cons, on the other hand, is down to personal choice like the all-black cabin which may not be everyone’s first choice and the boot space remains fairly limited. Looking at what the new i20 offers, it’s safe to say that this premium hatchback could bring Hyundai back at top of the segment.