There has been a lot of excitement around Nissan’s latest compact SUV, the Magnite, touted to be a volume-driving car for Nissan, globally, which will be launched on December, 2nd, 2020 in India. We got behind the wheel of this compact SUV that has been engineered in Japan but both, inspired by and made in India, and came away hugely impressed. Here’s why…

First things first, it boasts a gorgeous design. Now, if you’re one of those, who thinks a compact SUV must masquerade as a full-bodied true-blue SUV with aggressively butch looks and macho appeal, you may want to reconsider reading further. Though the Magnite does have a certain boldness in its design, it isn’t the ‘in your face’ kind. What you get instead, are cleanly and elegantly contoured, no-fuss design lines, that just win your heart. 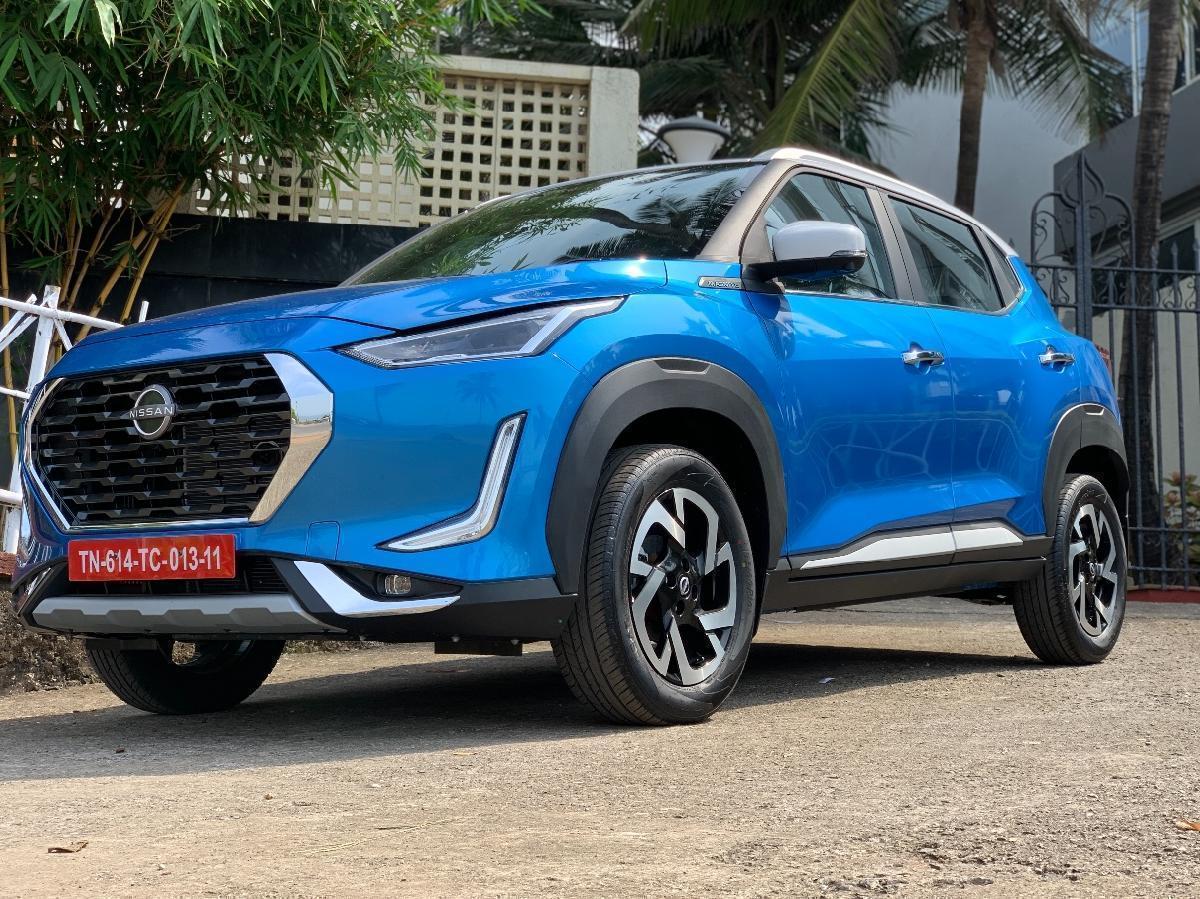 And just in case you’re wondering, no, the Magnite hasn’t been built to accomplish 20,000 tasks like some OTT Swiss Army Knife out there, nor has it overdosed on its tech offering, but at the same time, the Magnite, is perfectly capable of rising to the occasion, should the need arise, and isn’t shorn of any of the tech wizardry either. Let’s just say, that the Magnite is not screaming from the rooftops about being a bad**s, infact, it just continues doing what it does best, showcase its Nissan-ness, unobtrusively.

The Magnite’s design is neither entirely boxy, nor bulbous, which gives its design a timeless appeal. 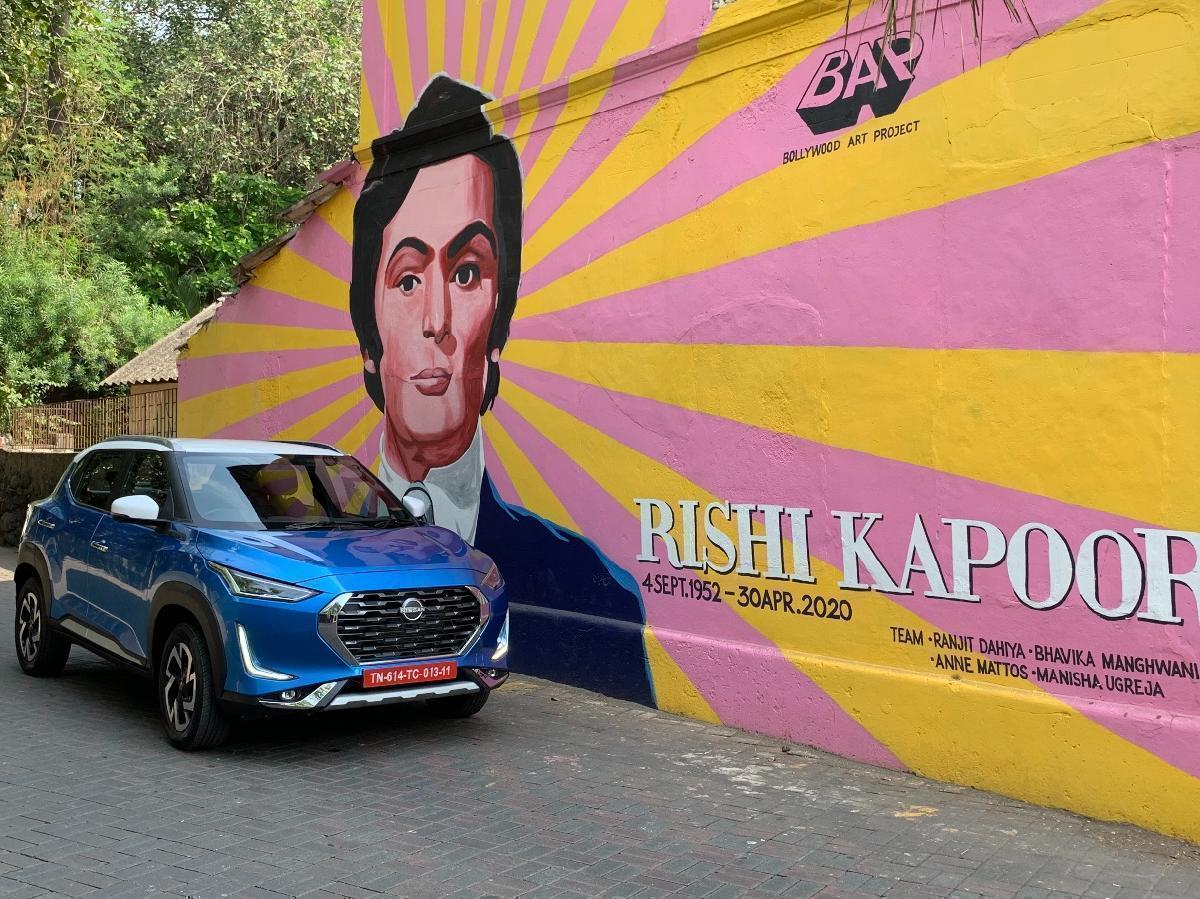 Another interesting feature of the Magnite is that there are no sharp edges on any of its panels and its body has been designed with great precision and finesse to show off its premium design while ensuring that fewer dust particles and debris sit on its surface.

Also, in certain colours, the Magnite looks simply stunning. We had the dual tone, blue and white colour combo on our compact SUV, and while seeing certain blues merge into various hues of a stark deep purple, has been slightly tiresome, of late, it has to be said that the Magnite’s blue had a certain light, fresh, and breezy quality to it, almost as if its colours were merging with those of the ocean and its surf. 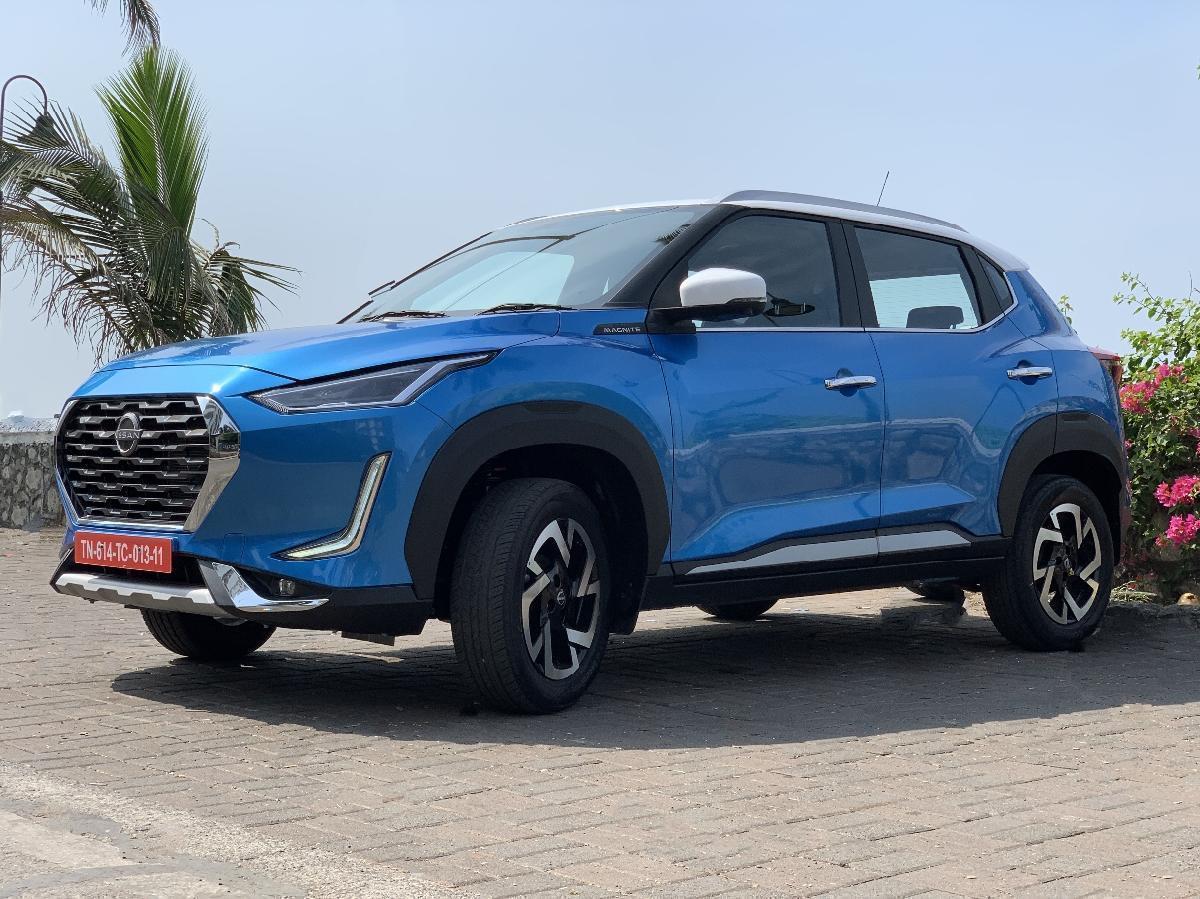 The Magnite’s bonnet bulges ever so slightly and tapers towards a beautifully-sculpted nose. It is after this that you arrive at the Magnite’s talking point, its massively appealing grille, which is flanked by the large chrome strips on either side. It is this beautiful grille which sets the Magnite’s stance and stature and elevates its looks to a whole different level. While the Nissan logo features prominently on the grille, the number plate has been moved down so that it doesn’t hinder with the design, thereby adding oodles of appeal to what can best be described as a very stylishly designed grille. 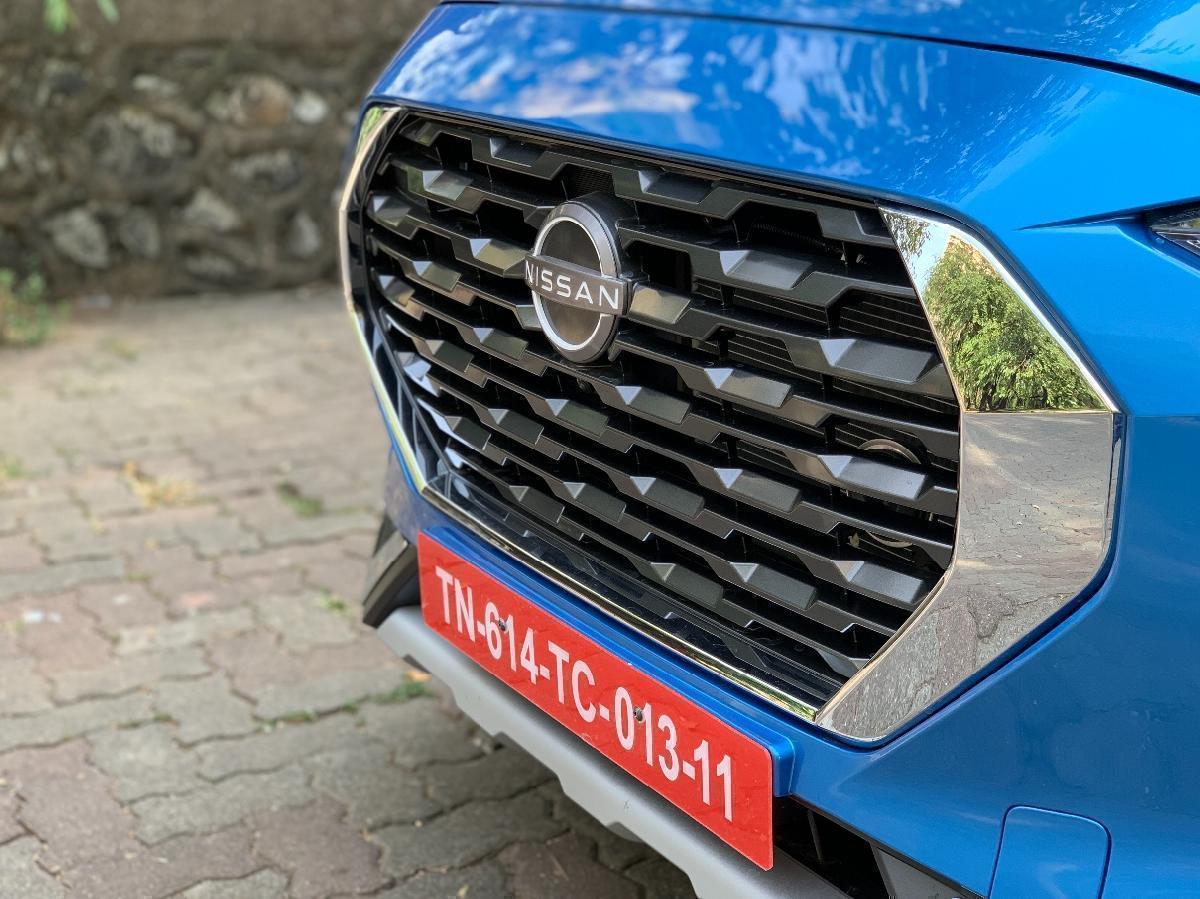 Overall, the front fascia, is clean and clutter-free with very few ornaments and whatever you see on it has been tastefully executed the LED DRL fog lamps, for instance. While the well-chiseled, cat-eyed headlamps come with projector LEDs which also add to the Magnite’s appeal, the signature taillamps are also ultra-stylish. The windows are adequately sized and you don’t get that feeling of being hemmed in especially during those bumper-to-bumper commutes. Also, there is a sleek quarter window which though not very big, does allow light to filter in, making the cabin look a tad bit roomier. 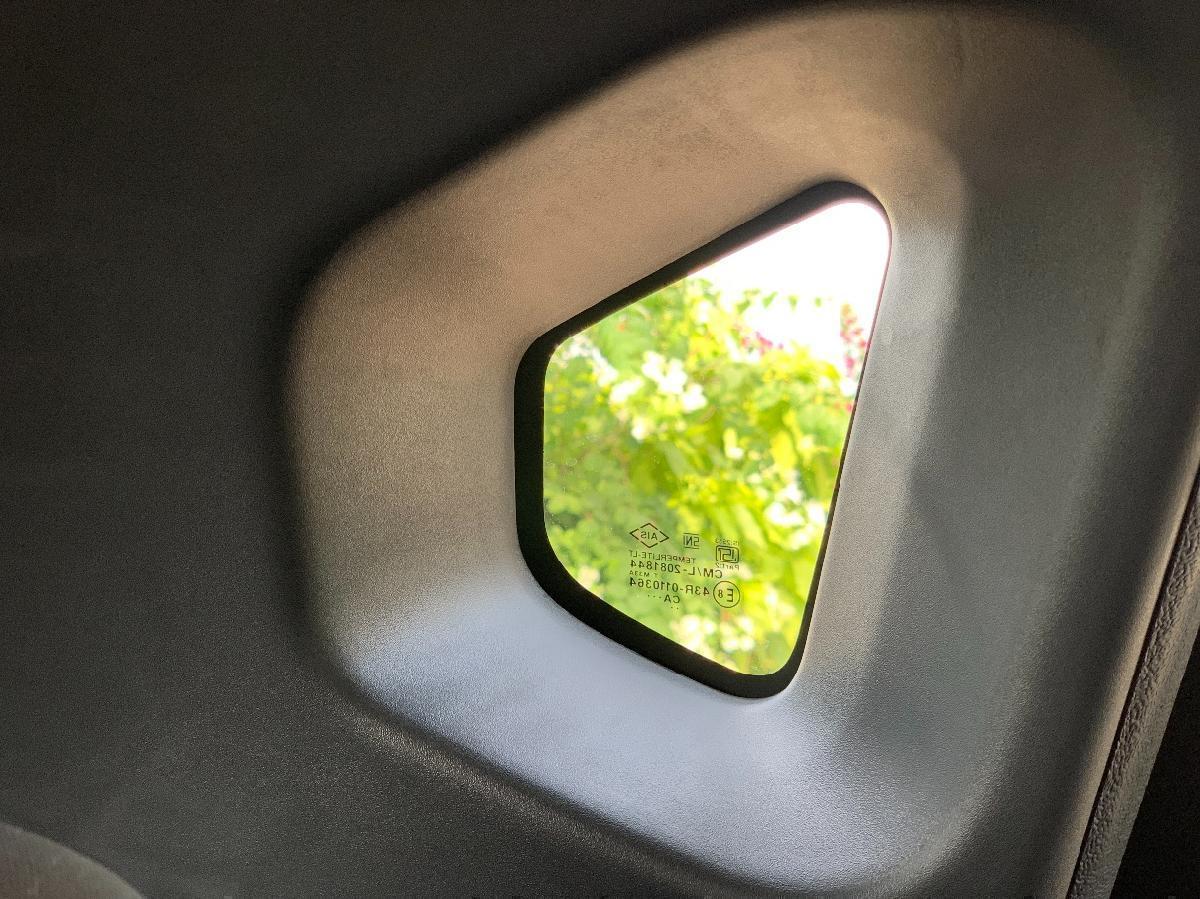 The door handles get a chrome treatment and come with a request switch so that you don’t have to fish for the key fob in your pocket.

The Magnite’s cladding, is split into two, sill cladding and door cladding and has been executed rather neatly. All grades of Magnite get the cladding as well as the 16-inch diamond cut alloys which we quite liked because of its minimalistic design and which blended in beautifully with the Magnite’s overall clean design philosophy. 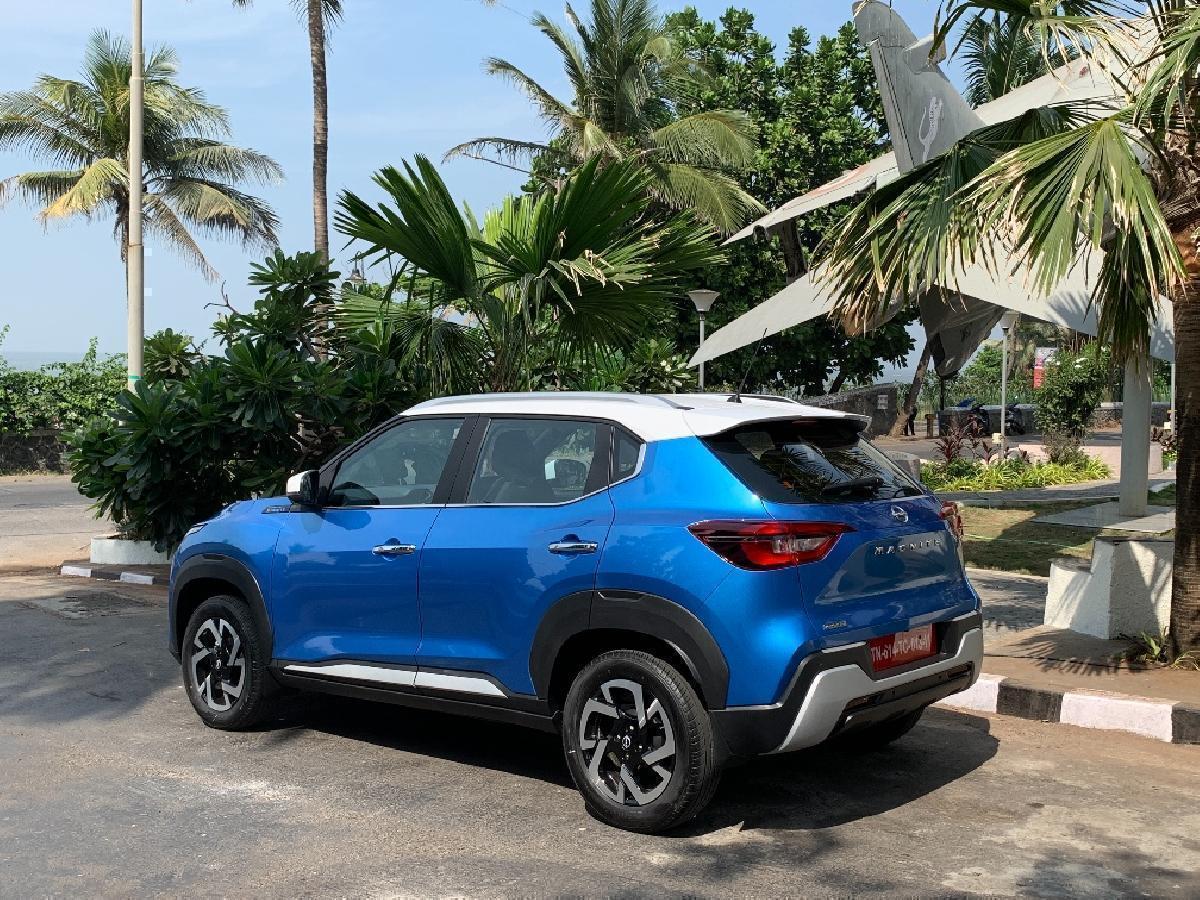 The Magnite’s dual tone roof extends well beyond the spoiler and its dual coated functional roof rails come equipped to carry up to 50 kgs of load capacity. 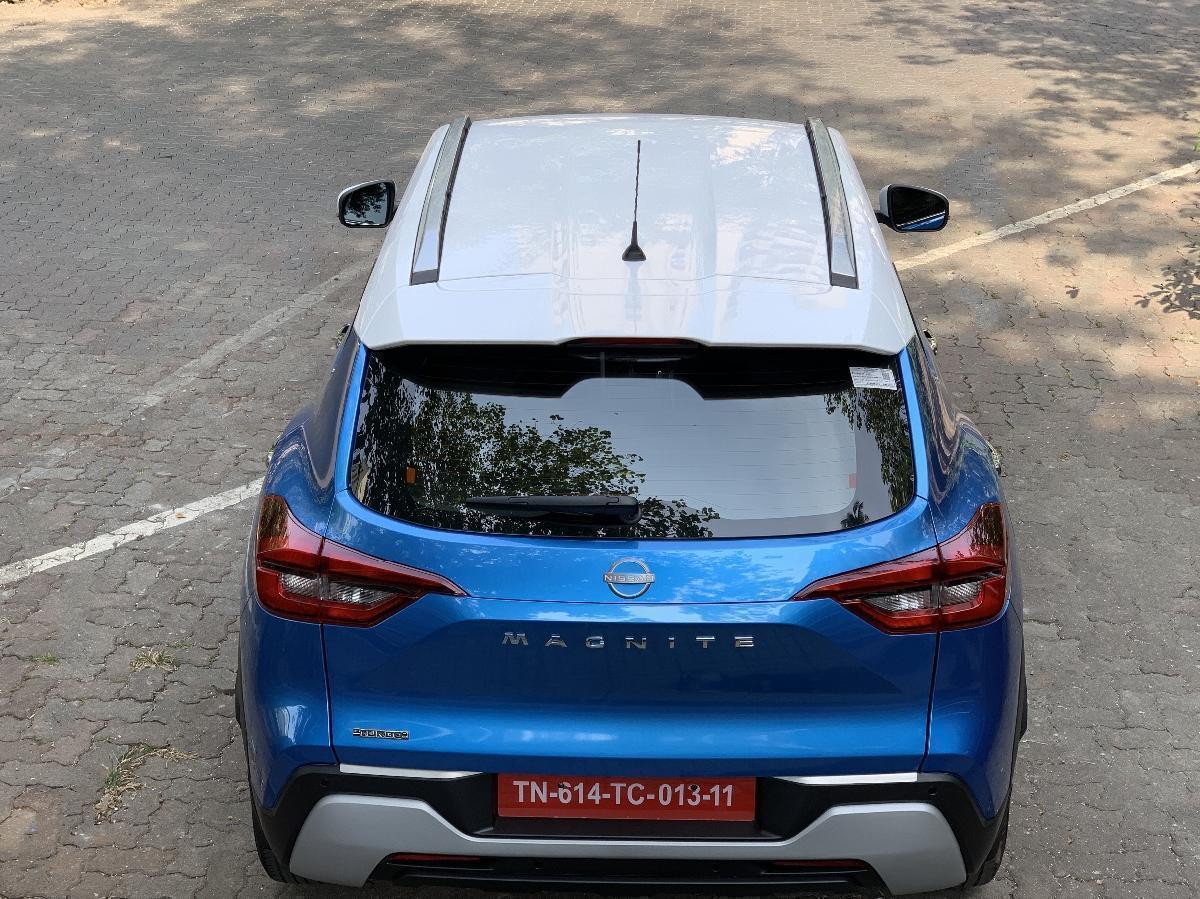 With 336 liters of boot space on offer, there is also a parcel mounting shelf and a net thrown in there. The loading bay height has deliberately not been kept too high or too low, and should work well for most people of average Indian height. However, the spare wheel that sits in the boot is only a 15’ inch one.

It must be said here that everything that you see on the Magnite has been exclusively designed for it, and that is why you don’t see anything being carried forward from any of the other Nissan models here."

The Magnite’s cabin is a comfortable place to be in. The doors shut with that reassuring thud and there is a good amount of headroom, both in the front, and at the rear, (thanks to the curvature of the roof at the rear), also sufficient legroom, even for really tall people, which is always a good thing.

The couple distance between the driver and the co-passenger (in the front) is quite a lot which may not be great when you have a hot date beside you, but is certainly something to be really thankful for during these times when social distancing is the norm. In fact, Nissan claims that it is the maximum in this segment. The rear door opens wide, thanks to a bigger aperture, making ingress and egress a breeze. The rear seat, seemed a tad too upright for me, but then, that’s just me, who likes a more relaxed seating position in a vehicle.

Look closely and you will see that Nissan hasn’t cut corners in developing the Magnite. The seats are semi-leatherette and come with adjustable headrests. The door fabric also complements the seats and there is even a similar stitching pattern on the full leather steering wheel. Feel the quality of the seat belts or the visors, which Nissan has ensured come with vanity mirrors on both the driver’s and the passenger’s side, or hold the grab handles or feel the coat hanging hooks, at the rear, and you will realize how there has been absolutely no cost cutting on the Magnite. 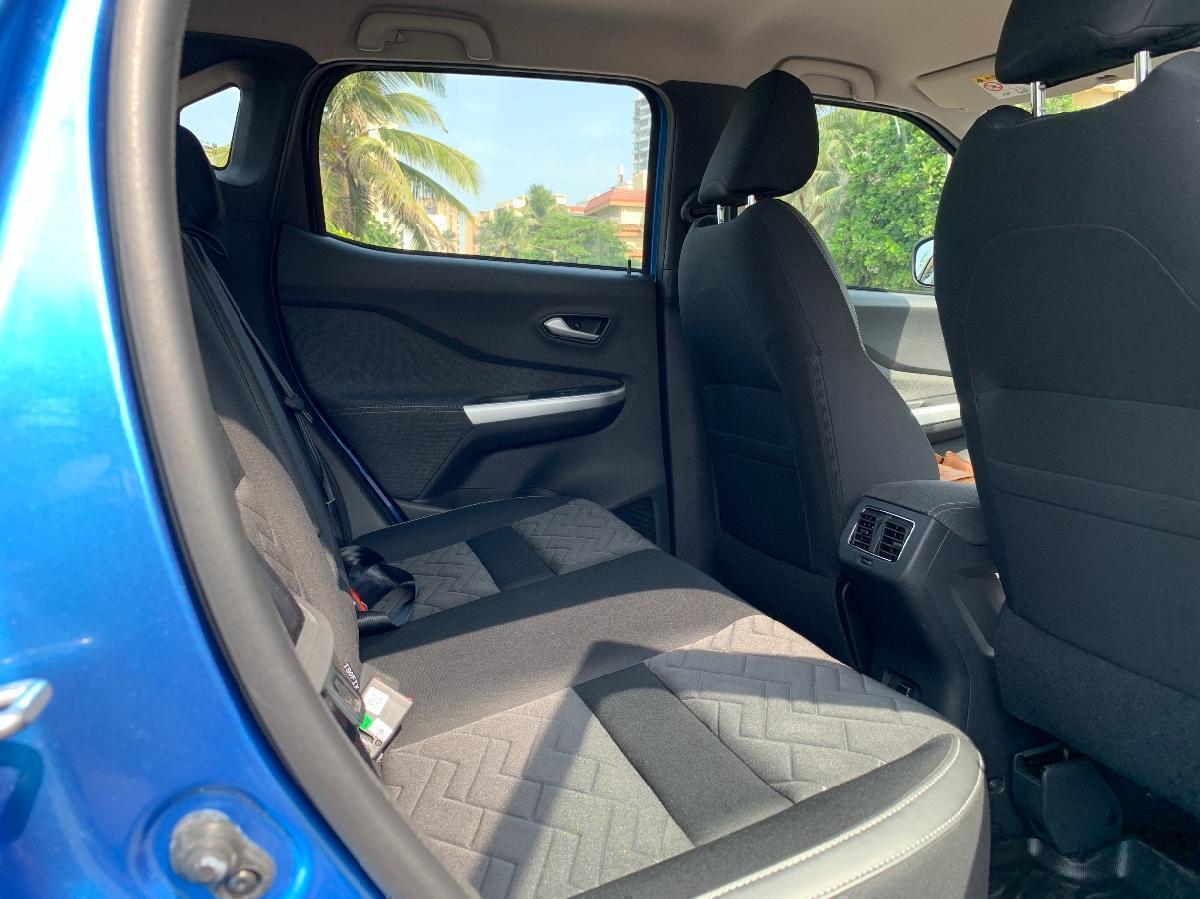 In fact, everything that today’s owner may want in a compact SUV such as a functional wireless charger, air purifier, premium speakers, ambient lighting, welcome puddle lamps, everything has been well-anticipated which also includes space in the front as well at the rear for sliding in your cell phones.

There is the 8+7 combination of the infotainment touchscreen and the instrument cluster. The touchscreen, which is tilted 5 degrees towards the driver is an 8-inch display and then there is the new 7-inch TFT screen which can be customized to show you information about your vehicle. 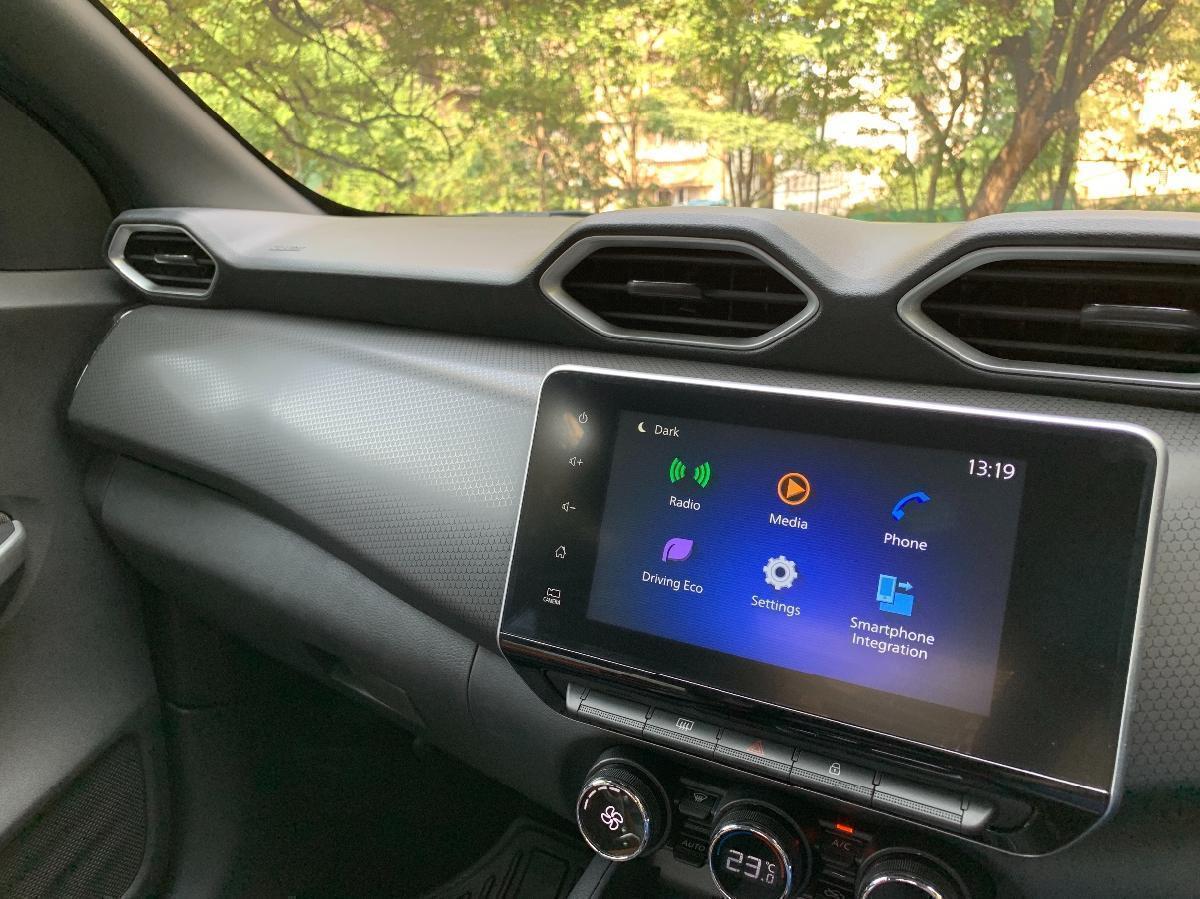 The dial face is gorgeous with its intuitive and interactive dials, unlike anything we’ve seen before. 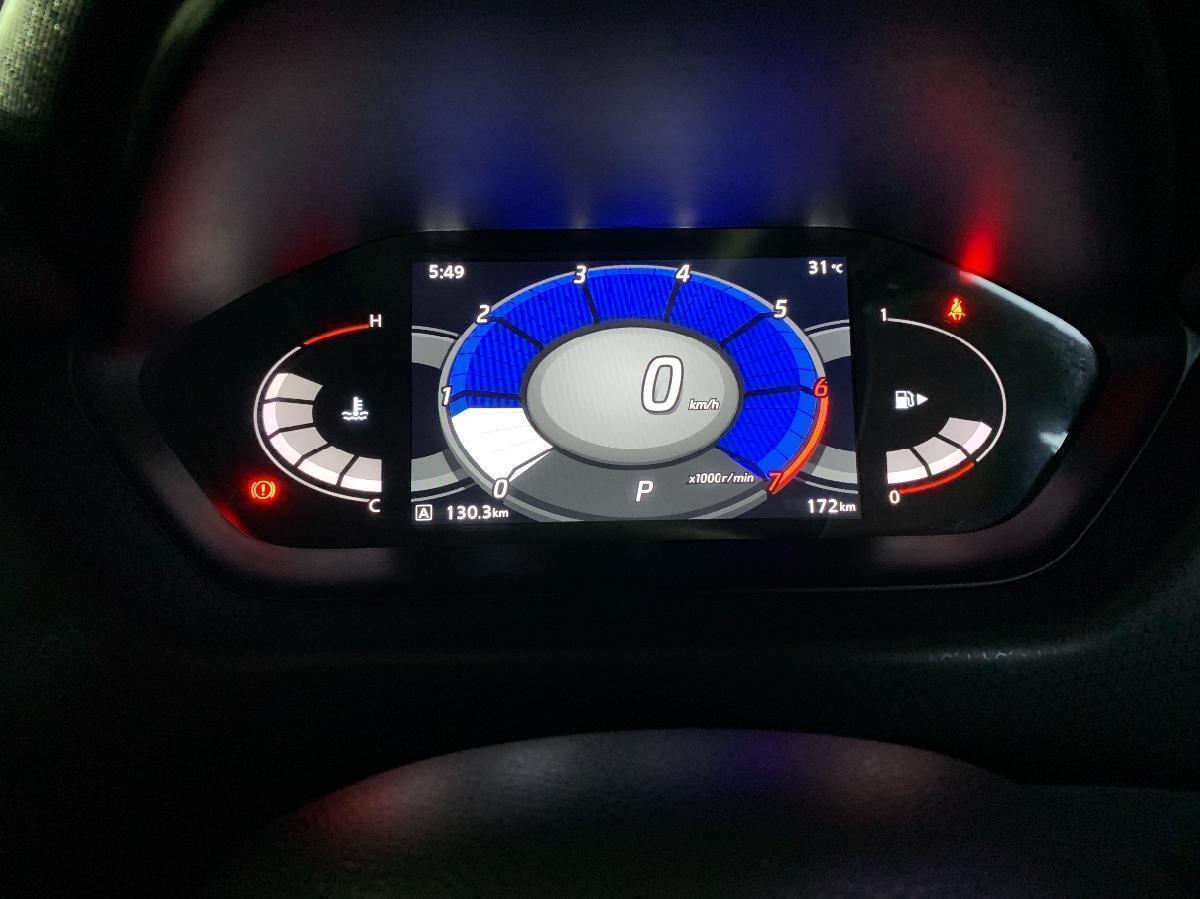 There is also Smartphone integration with wireless connectivity offering Android Auto and Apple CarPlay so that there are no dangling cables in your cabin and oh, you can also use up to five devices at a time while also charging your phone. Evidently, ergonomics has received a great deal of attention in the Magnite. From soft finished knobs to locating the start/stop button just a few inches away from your left hand, everything has been well thought out. 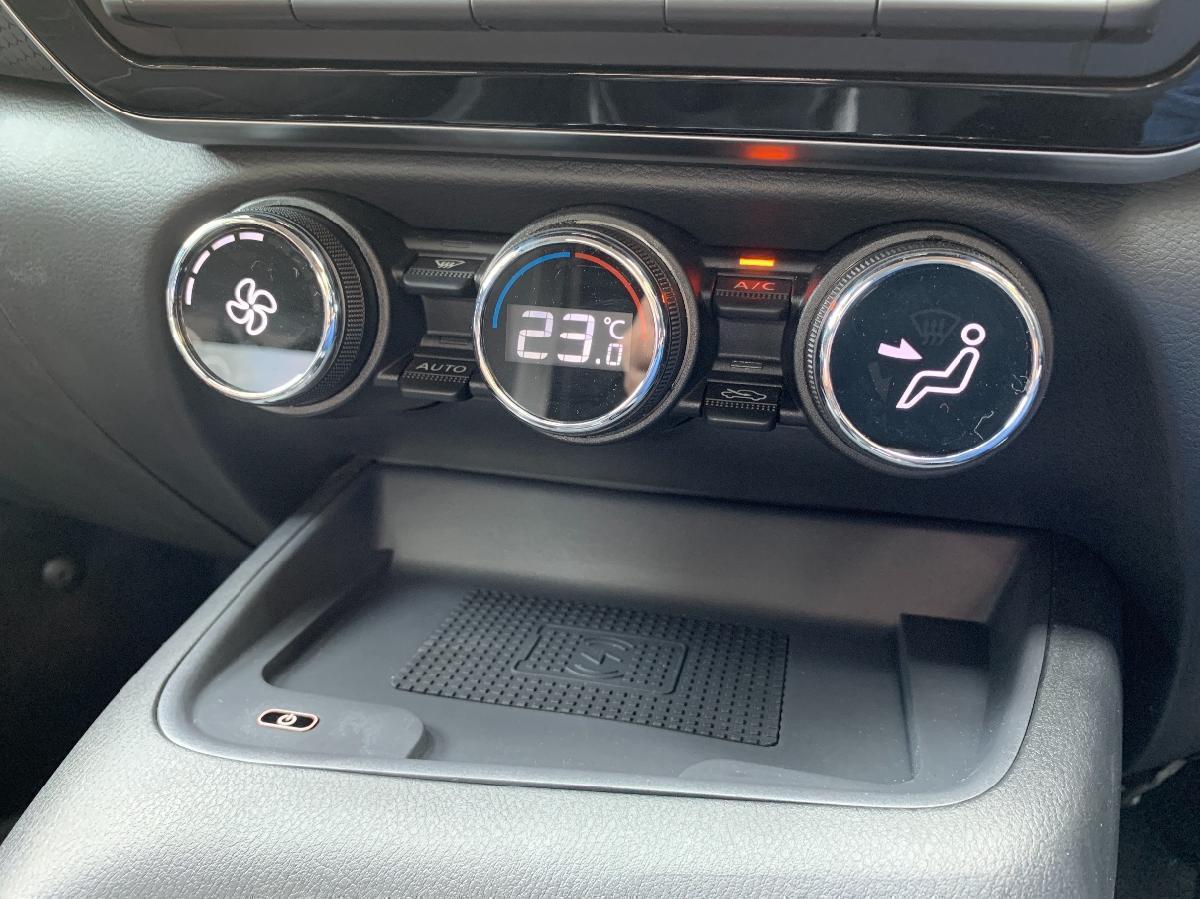 The glove box is deep enough to amply hold your everyday supplies of wet wipes, tissues and other knick-knacks. There is also storage space for your wallet in the front. Not to mention loads of storage for your 1-liter bottles in the door pockets as well as your coffee cups both at the front as well as at the rear. The rear cup holders could have been slightly deeper though.

We were truly impressed with the Magnite’s driving position and the overall visibility which it offered. The driving seat is well cushioned and offers just the right amount of stiffness to ensure you stay awake and are not lulled into sleep. 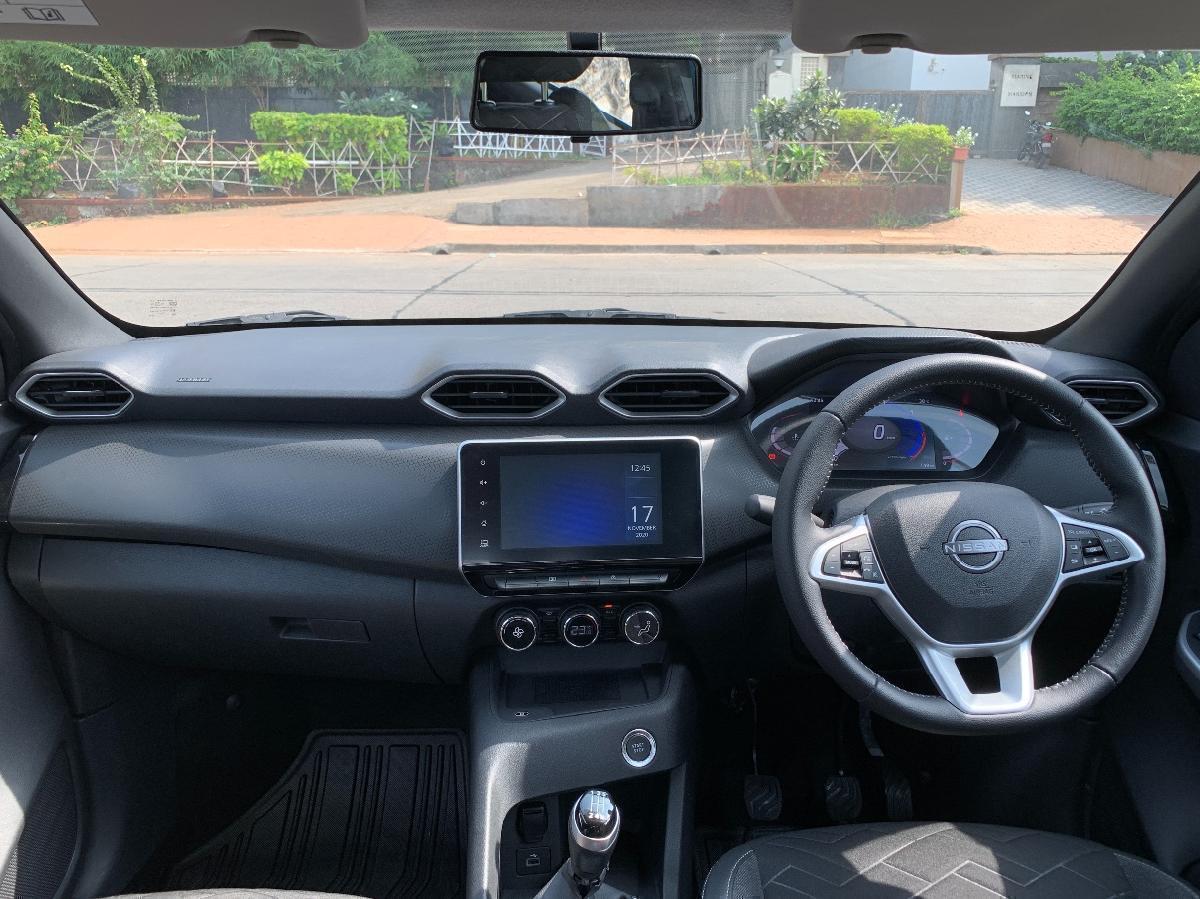 Crank the engine and you will see the full revolution happening, giving you a very sports car feel, and why not? Afterall, who can forget Nissan’s world-class sports cars such as the GT-R? The welcome animation also is a nice touch.

The 1.0-liter HRA0 Turbo engine that does duty on the Magnite is truly a gem of an engine and we discovered this soon after cranking the engine and setting off on Mumbai’s roads. In fact, the ‘HRA0’ engine may as well be re-christened as ‘HERO’ engine because it truly is that good. In fact, it is truly a rocket engine. The Magnite which we drove was a 5-speed manual, (There is also an X-Tronic CVT gearbox), which delivered a maximum power of 100 PS and a maximum torque of 160 Nm and believe me, when I say that you have to drive the manual to truly experience its torque. In fact, due to heavy traffic we couldn’t achieve speeds that we ordinarily do and so, we couldn’t really push this engine to its limits but within a few minutes of slotting the car into the third, followed by the fourth, and then the top gear, it was evident that the Magnite was capable of some wonderfully amazing figures. Even at low speeds, the performance was absolutely stellar, no stalling, nothing. The ground clearance of 205mm serves the Magnite well, especially on our Indian roads which have unique ways of hurling surprises at us.

We were also impressed by how well contained the NVH levels were. In fact, the only audible sound in the cabin was that of the fan blower set to speed 4 because it was a rather hot afternoon.

The full leather steering wheel is meaty and I particularly liked the way in which it has been mildly squared off at the bottom, without the jagged edge, in a nice soft way, where you can barely even tell that it has actually been squared off. 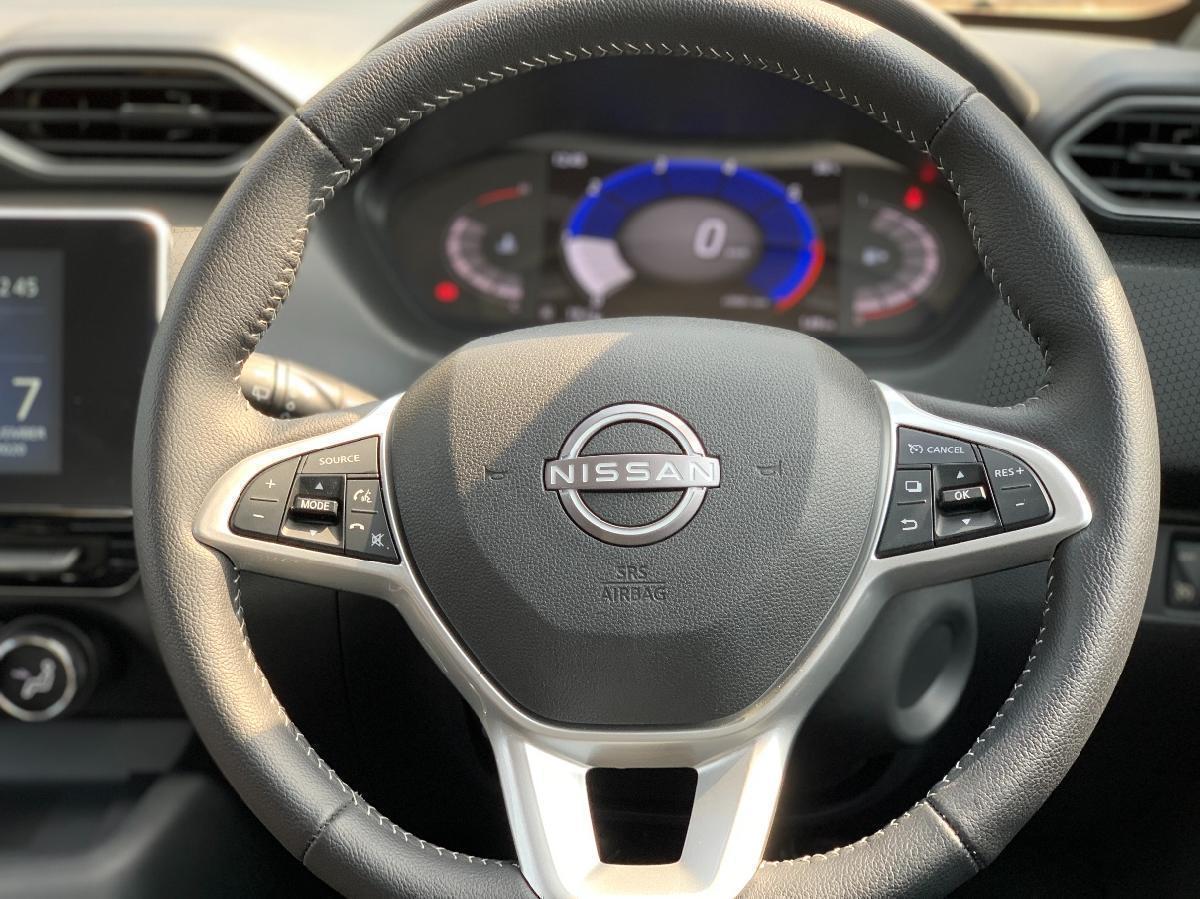 The Magnite comes with an anti-roll bar mechanism for safety and durability which has been provided as standard across all grades. Besides, in terms of safety, there is also ABS, EBD, and dual airbags. For slippery surfaces, traction control has been provided and it also gets the Hill Start Assist function ensuring that you are covered and that safety is the last thing you have to worry about. 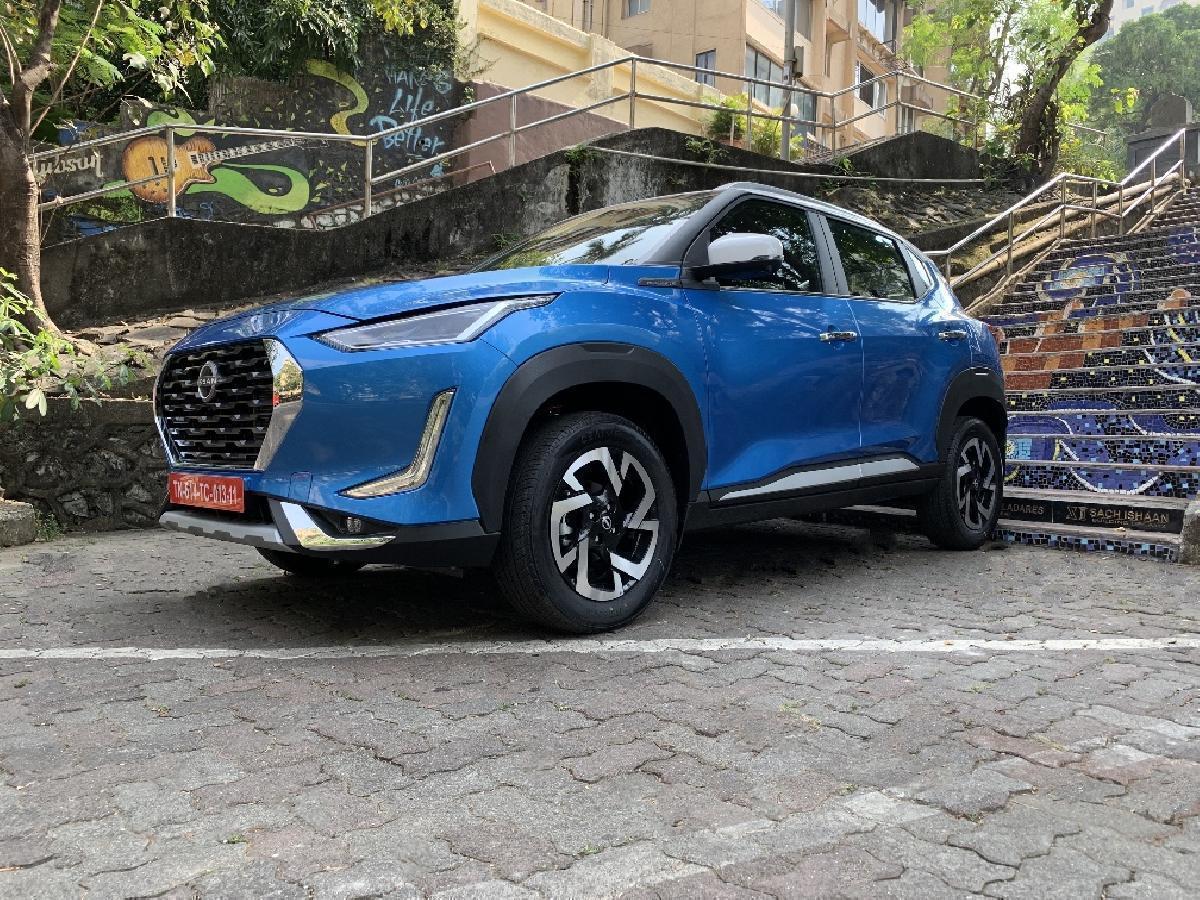 The Magnite truly epitomizes the ‘Make in India, Made for the World’ philosophy and in readying this global car in India, which will later be exported to various countries, it does send a very strong message to the world about India’s robust manufacturing capabilities vis-à-vis cars and engines. That very soon, the Magnite, will wear its tag of a global car effortlessly, goes without saying. The question now is, how will Nissan beat its competitors at the pricing game? Worth waiting and watching, we say.