Renault - May your Tribers increase

Have as many friends as in the American sitcom F.R.I.E.N.D.S? Consider the Renault Triber, to enjoy their company on open roads, and that too, without splashing the dosh

Nobody does chic the way the French do, and Renault’s latest offering in the Indian car market, the Triber, is no exception. This is a sub-four-meter car that is actually a seven-seater and Renault has done a very impressive job, both, in terms of design and styling. Take one look at the beautifully designed pod that houses the instrument cluster and you will know exactly what I’m talking about. More on that later, but let us begin by looking at its exterior design. 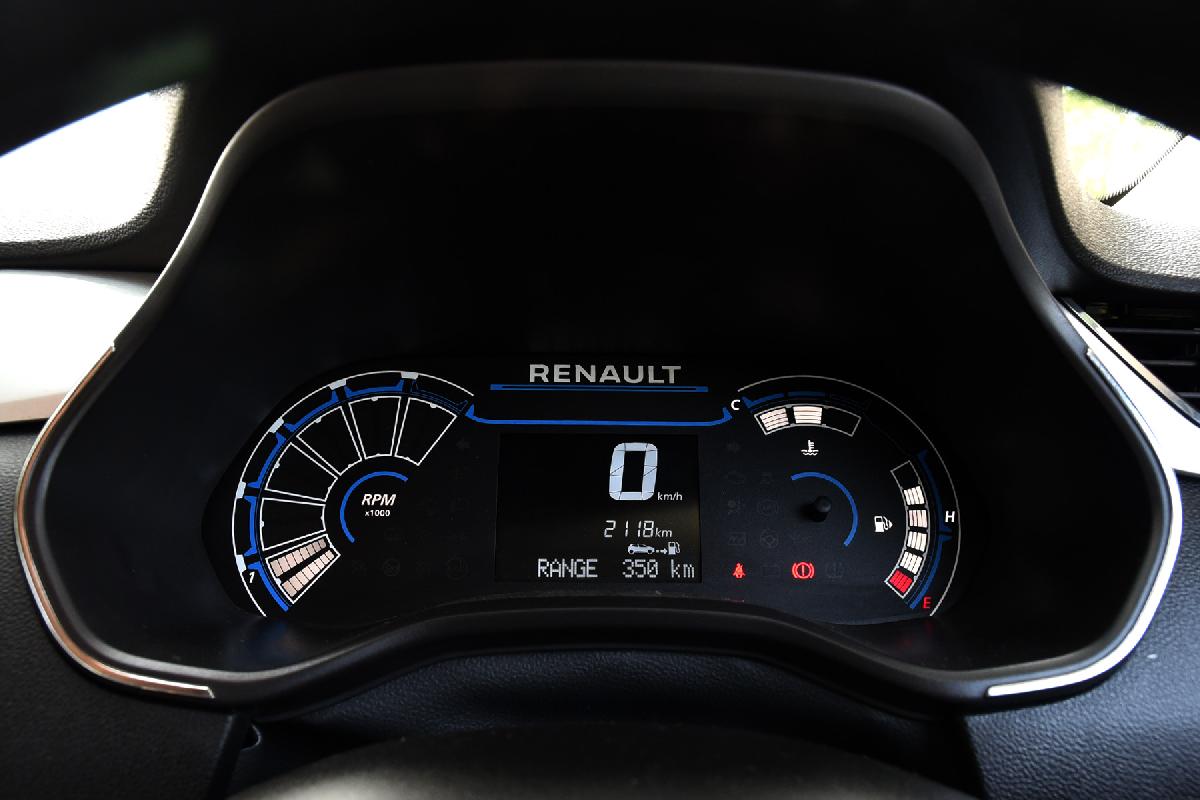 The first thing you will notice is how harmoniously the Renault logo blends in with the grille and how the headlamps look so neatly integrated into the front fascia. Neither the grille, with its chrome elements, the big, bold Renault logo, nor the chrome edged projector headlamps, look disproportionate, and the crease lines on the bonnet give the Renault Triber’s bonnet an even wider and more sculpted look. The black roof rails, the black runners on the side, the black wheel arch cladding, a rear spoiler and scuff plates, all add a dash of sportiness to the Renault Triber, giving it an SUV-like feel. 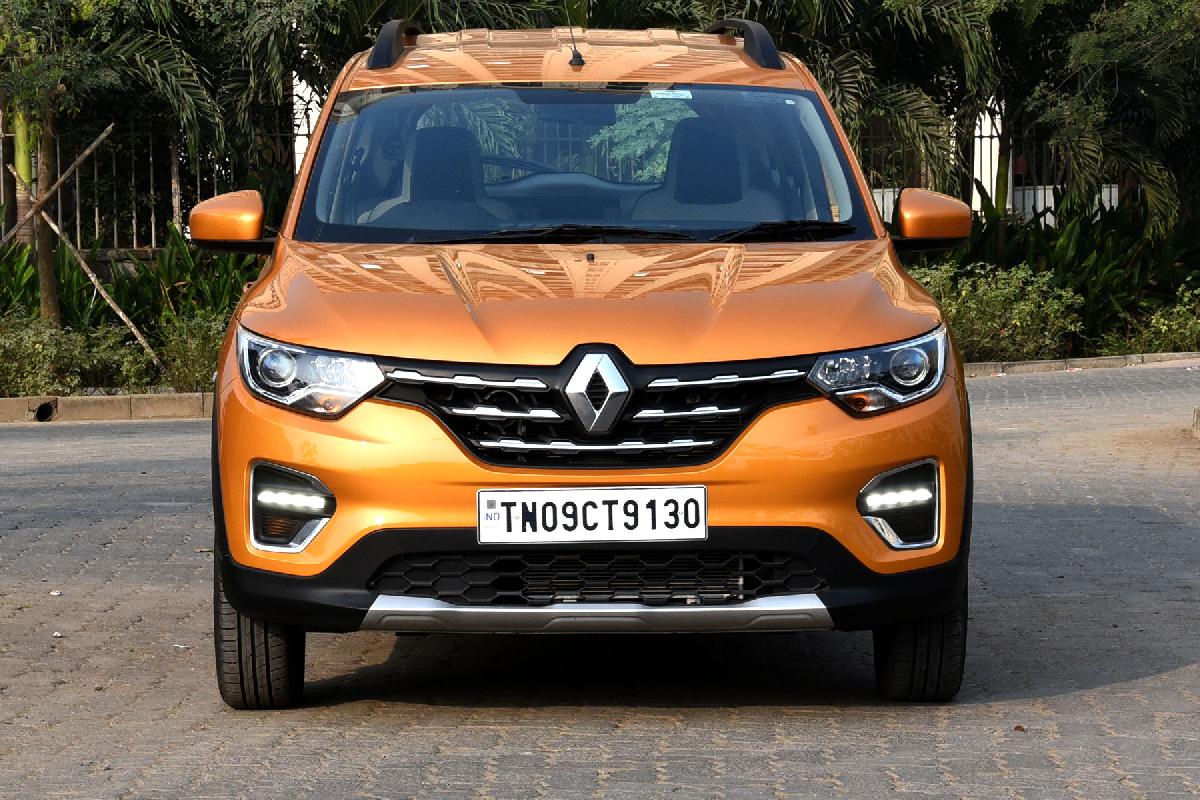 What you will definitely not fail to notice about the Renault Triber, is its understated, yet, utilitarian design which the designers at Renault Design Studio have really devoted time to. The short bonnet and long wheelbase give its body a long appearance which translates as oodles of space on the inside, and that happens because the Renault Triber gets a long wheelbase of 2636mm, the longest amongst the other sub-four-meter cars, resulting in a fairly roomy cabin. The large doors and large sized glass windows also go a long way in giving the giving the cabin a spacious feel. Both, the second row, and the third row, have ample space. Getting in and out of the Triber’s third row is literally a breeze, unlike the cumbersome third-row seats that we see in many cars, a flip of the middle row seat does the job. The third-row occupants will find that there is ample space for them without getting that awkward feeling of being hemmed in. In fact, the third-row seating is so good that it gets a thumbs up from us.

There’s more to this ultra-modular sub-four-meter package. The Renault Triber’s versatility best comes into play when its seats need to be configured in order to make more space. The manner in which the middle row seats can be folded down 60:40, and the backseat angle adjusted, to create additional space, speaks volumes about how it can accommodate not just different sized people and their different sitting styles, but also how it is large enough to carry all their paraphernalia as well, without compromising on seating comfort for any of the occupants and that is truly a feat! What you end up with in the Renault Triber, is 84 liters of space with none of the seats folded up, and 625 liters of space, with all seats folded down. Heck, even your pet will appreciate all that space inside the cabin, especially on those long road trips. The well-located air con vents inside the cabin, also add to the occupants’ comfort and that truly is indeed a thoughtful touch. 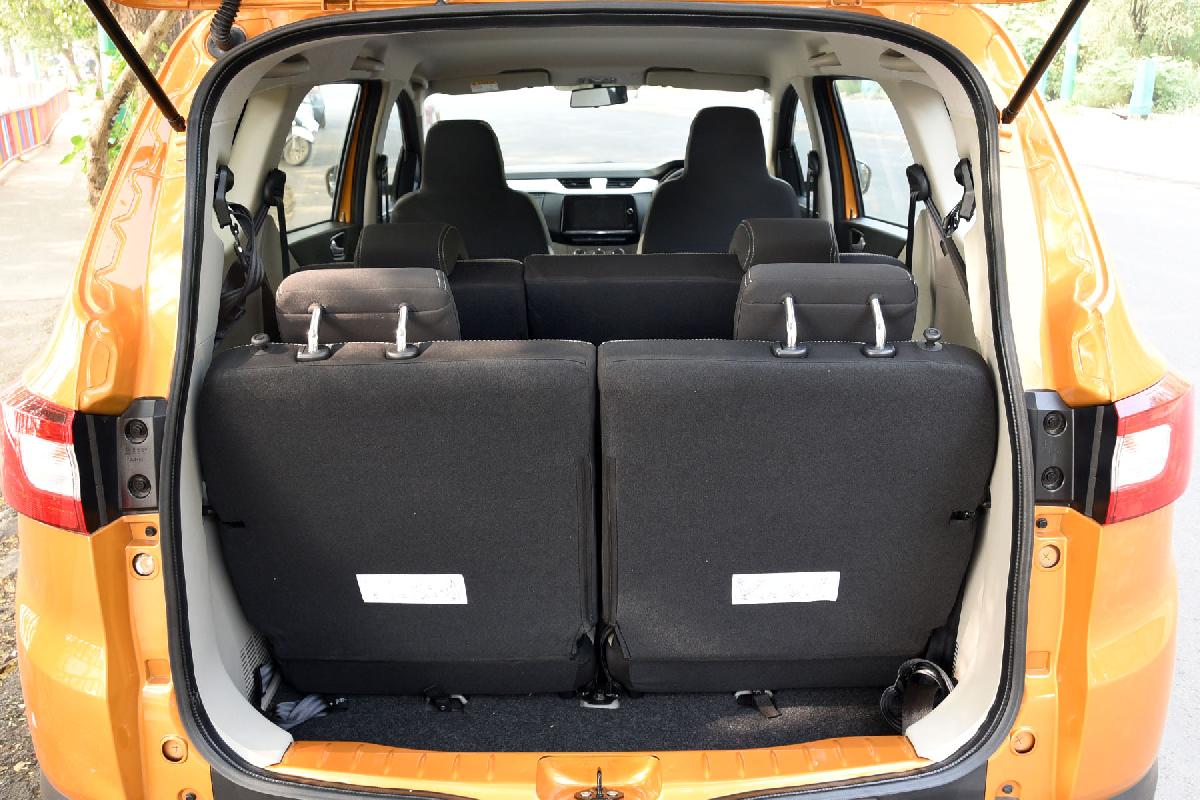 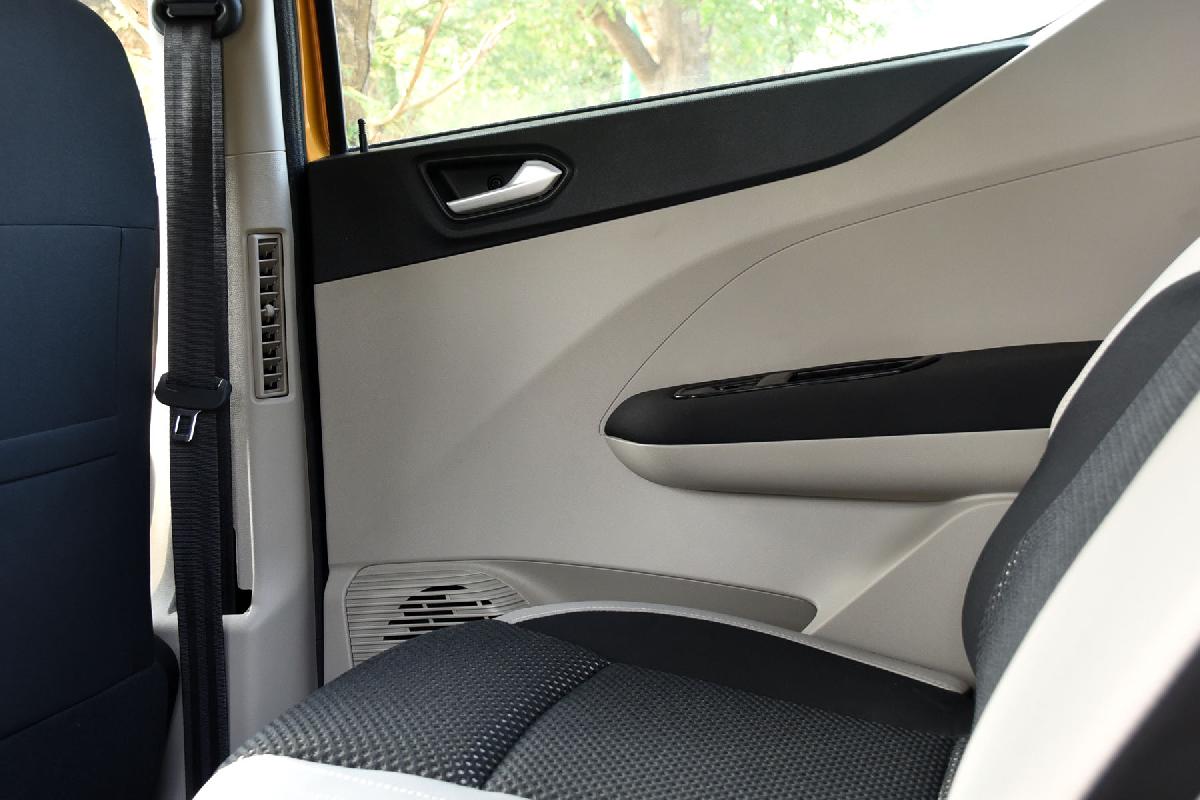 A lot of use of hard plastics is evident on the dual-tone dashboard as well as on other surfaces of the car, but both, the colour and the quality, give no cause for complaints as they blend in well with the minimalistic and fuss-free design aesthetic of the car. It must be mentioned here that though the design is understated, the Renault Triber, doesn’t miss out on other creature comforts such as keyless entry or the start/stop button for instance, which even comes with a charming decorative metal bezel. The upholstery, in keeping with the dual tone of the dash, uses similar shades of grey, which don’t exactly liven up the interiors as much as maybe beige upholstery would have, but it doesn’t make it flat and boring as black would have either. 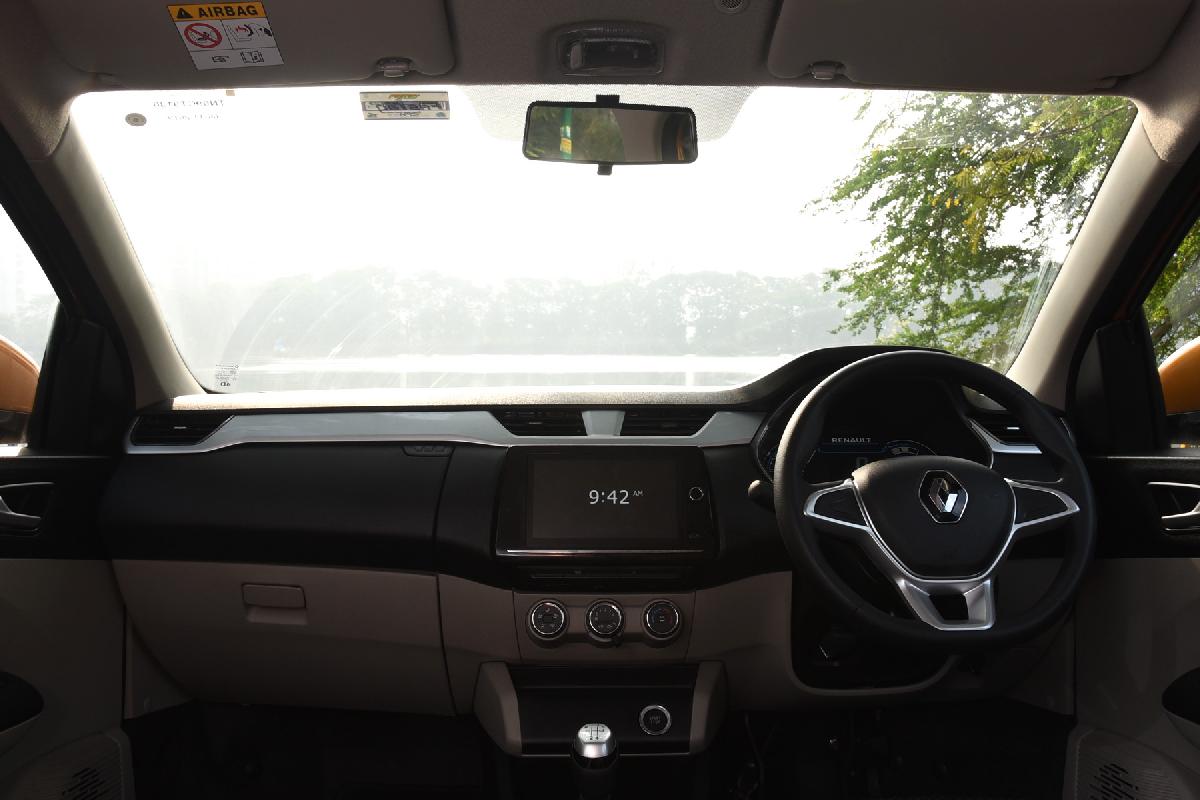 The quirky instrument cluster, located inside a beautifully shaped pod, has a pleasing combination of mostly blue and white lighting, sans any of the garish illumination, often seen on several cars these days, along with a well-sized display on the digital speedo. There is also the 8.0 touchscreen, which is easy to use. All these are perfect examples of good aesthetics and technology coming together to create elegant design.

Coming back to its core strength which is the utilization of space in a very clever manner, Renault has also ensured that there is plenty of space for bits and bobs that you may want to stow away in your car. From a small tray that sits above the USB port for you to keep your cell phone or petty cash to the dual glove boxes, where you can store your money clutch or your car’s user manual in one and use the other (lower) one, which is a cooled one, to store chocolate bars or fruit juice packs. There’s even space provided to house full-sized, 1-liter bottles; Renault has really thought the Triber through. 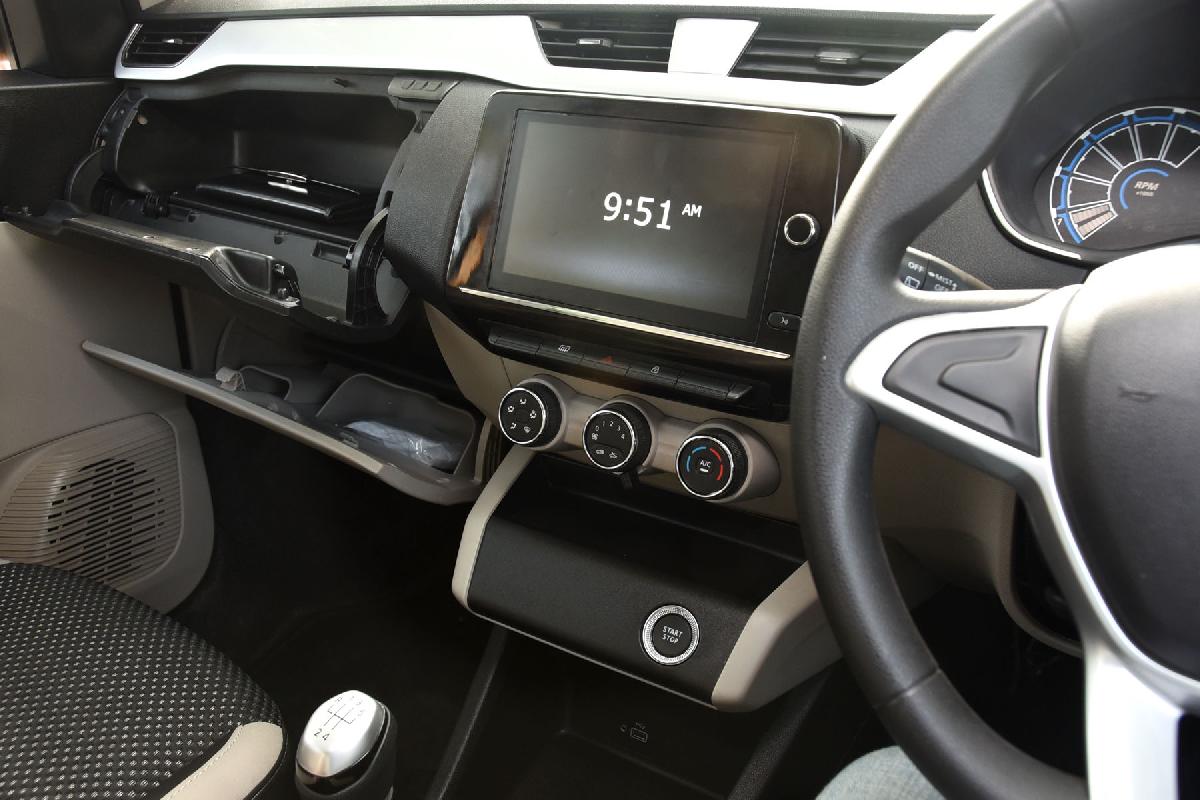 Evidently, the Renault Triber wasn’t engineered to be a wildly exciting track car but I wouldn’t go to the other extreme of calling it dull and boring either. In fact, it is a very well built, solid car that should not be ignored. Powered by a 3-cylinder, 1.0L (999cc), MPFI, petrol engine, which belts out 96 Nm of torque @3500 rpm and 72 bhp@6250 rpm, I am pleased to report that at no point in time did it feel underpowered nor did I experience moments when I felt that it lacked the grunt. There was some engine noise filtering into the cabin but that isn’t as much to be a deal breaker. The mantra to driving the Renault Triber smoothly, and as it is meant to be driven, is to simply ensure that you’re engaging the right gear at the right speed, and that should give you a seamless driving experience. Kudos to the engineers at Renault who have managed to keep the kerb weight of the car at 947 kg which also helps the car in being fuel efficient. ARAI figures claim a mileage of 20 Ltrs/km which is impressive, to say the least. Accelerating the Renault Triber saw the tachometer lighting up one bar at a time, which made for a rather pretty sight, unlike anything I’ve seen before in this segment. The Renault Triber’s slight bump on the C-Pillar, which is there for aesthetic purposes, makes the car look really cool from the outside giving it its SUV-like feel instead of the MPV-like feel. However, it can be slightly distracting while driving, giving the impression of a car perpetually driving in your blind spot, but then, putting your ORVMs to good use and adjusting your driving position should be able to fix it.

It is the suspension, which has always been the talking point of Renault cars, and that has not changed with the Triber either. With McPherson Struts in the front and torsion beam rear suspension, the Renault Triber, tackled most of the city’s ugly potholes without any problems. The disc brakes in the front and drum brakes in the rear also demonstrated their braking prowess well during the braking test. (The Triber came with 15-inch radial tubeless tires.) A ground clearance of 182 mm (unladen) on the Renault Triber, also means that the designers at Renault, have spared a thought to keeping the driver and the occupants out of all kinds of water trouble, especially during our monsoons. 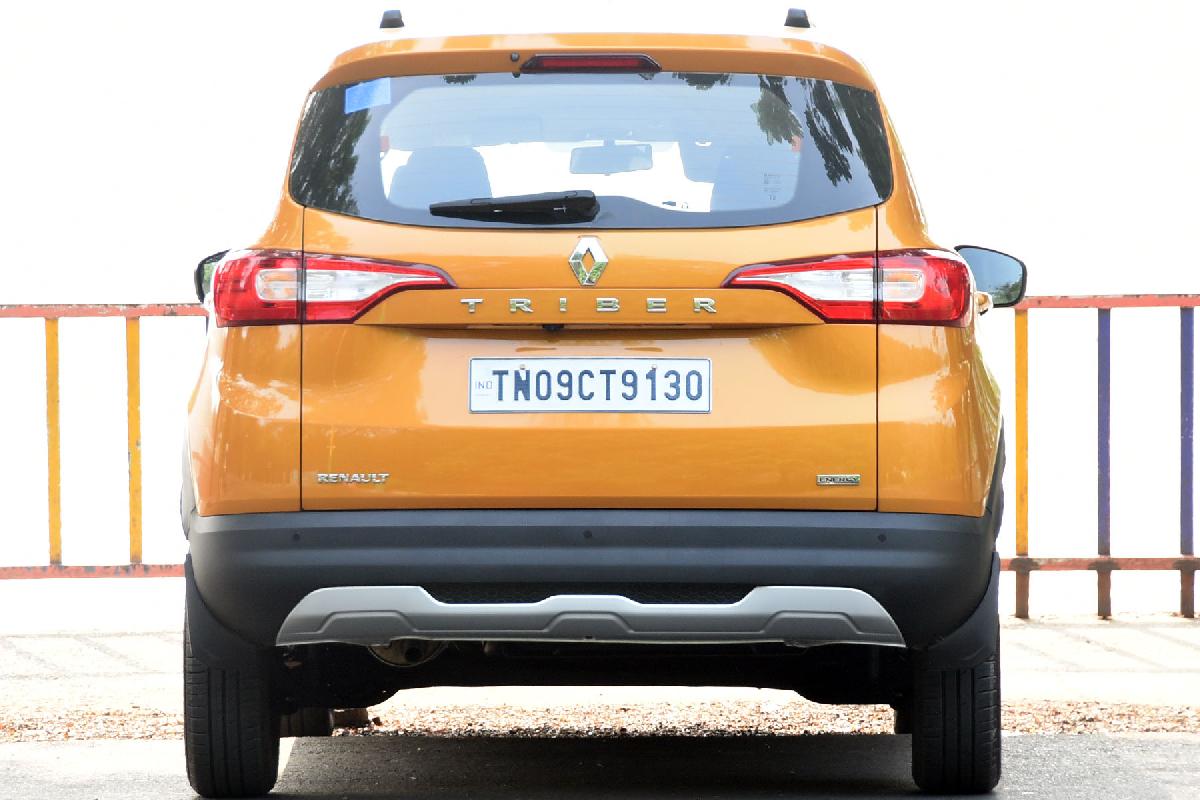 Overall, the Renault Triber, makes for a great choice especially for all those car buyers who have always wanted the extra space to carry two more friends or family members in a small car. Plus, at a starting price of INR 4.95 Lakh, it won’t break the bank either, not to mention its remarkable FE (Fuel Efficiency) figures. Though available now only as a 5-speed petrol manual, (Renault is not offering a diesel option) its AMT variant is expected next year. So, if you’re in the market for a spacious small car that can ferry more than five people, the robust Renault Triber, should definitely be on your must-drive list before you make your purchase. Rest assured, it will get the job done in style, and that too without burning a hole in your pocket and yes, you will love driving it both, in the city as well as on the highways.