Safety, Thy name is Volvo

I have yet to meet a motoring enthusiast who hasn’t, at least once, chuckled at the half-witted Volvo jokes that do the rounds from time to time. Truth be told, it is in fact, Volvo, that has the last laugh as competitors struggle to keep pace with their safety innovations. Afterall, had it not been for Volvo’s history of safety innovations and their generous nature in waiving off patent rights to benefit all of mankind, our killer roads would have been an even more dangerous place to drive on, than what they are today.

I recently drove Volvo’s XC40 T4 R-Design (Petrol), and found that while it continues its heritage of safety and is packed to the gills with safety features, what really stood out for me, about this SUV, was its gorgeous Scandinavian design which frankly few rivals can match.  The XC40 T4 R-Design (Petrol) is a beauty, to say the least, and it has got the whole black theme going for it. The black theme, which hasn’t gone down well with many SUV manufacturer’s SUV models, really blends in beautifully on the XC40 T4 R-Design, because of the thoughtful manner in which it has been incorporated throughout on the SUV. The XC40 T4 R-Design, gets not just a glossy black R-Design grille on the front fascia but also gets glossy black integrated roof rails on the top that really give the SUV a sporty look. The glossy black décor on the side windows and the glossy black rear-view mirror covers, also add panache to create this black magic. However, that’s not all, the C-Pillar, which can be a bit of a fingerprint magnet, gets the R-Design moulding in black, and glossy black skid plates, both at the front and at the rear, in black, complete the black theme on this very well-proportioned SUV. 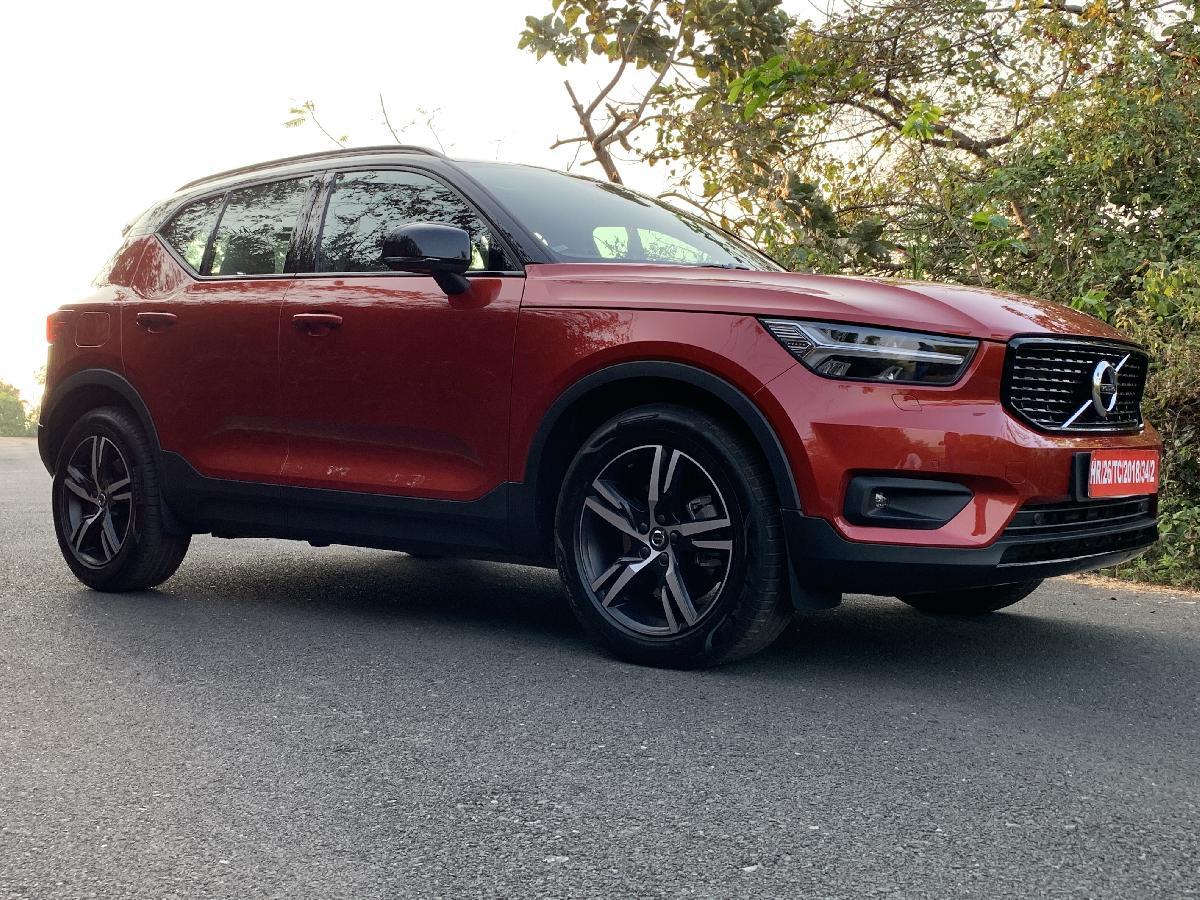 The Scandinavian design is writ large on the XC40 T4 R-Design. One look at the muscular bonnet and you will know exactly what I am talking about. The SUV also gets beautiful LED headlights as well as spectacular fog lights that sit below the headlights, next to the skid plates, in a beautiful black casing which adds oodles of character to the jewel-shaped fog lights adding to the SUV’s overall design. 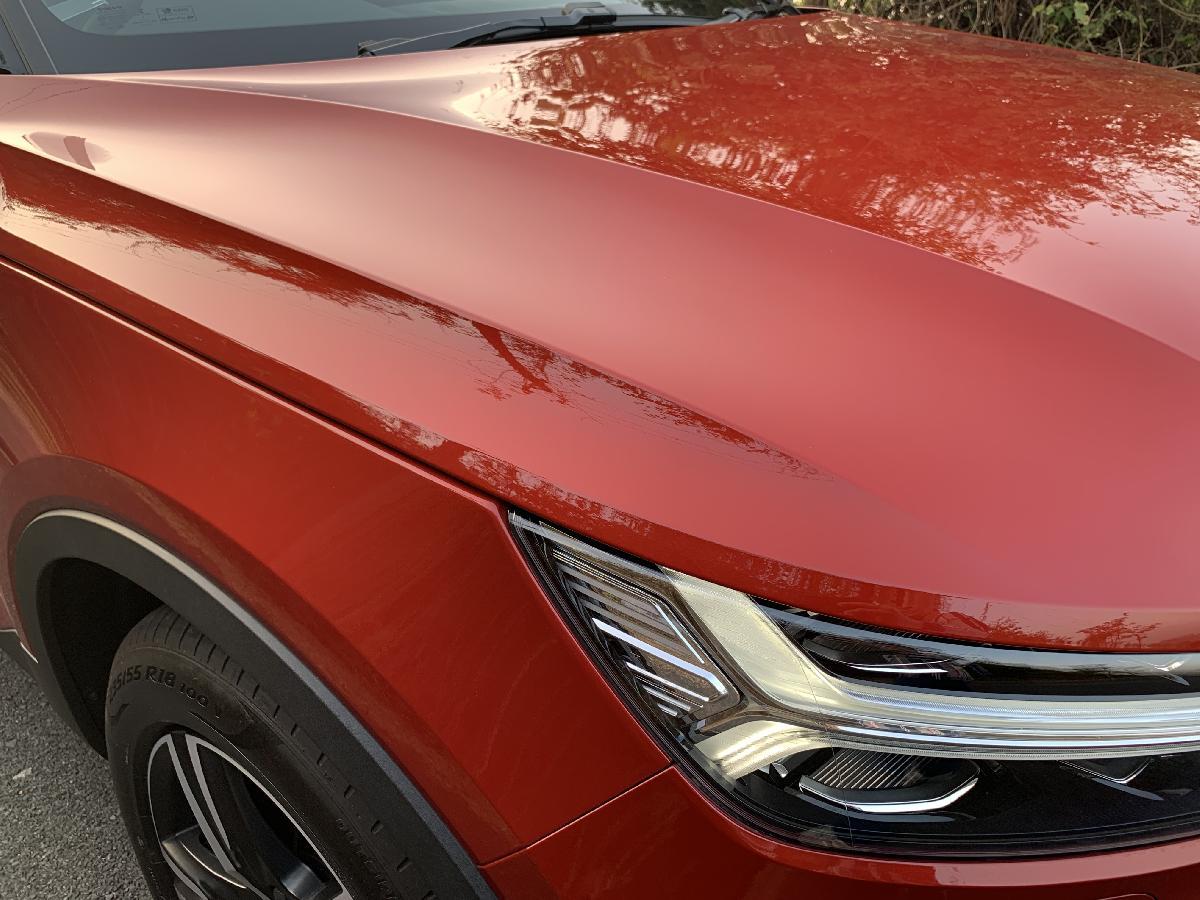 The SUV also gets keyless entry but the XC40 T4 R-Design’s remote key control comes in the form of a rather sleek leather clad casing with shiny chrome buttons on the side that slides smoothly into your front pocket without you feeling the slightest discomfort even while seated behind the wheel. Unlike a lot of other bulky key fobs where you immediately have to set aside the key once seated inside the car, the XC40 T4 R-Design’s lightweight key fob barely lets you feel it is sitting inside your pocket. 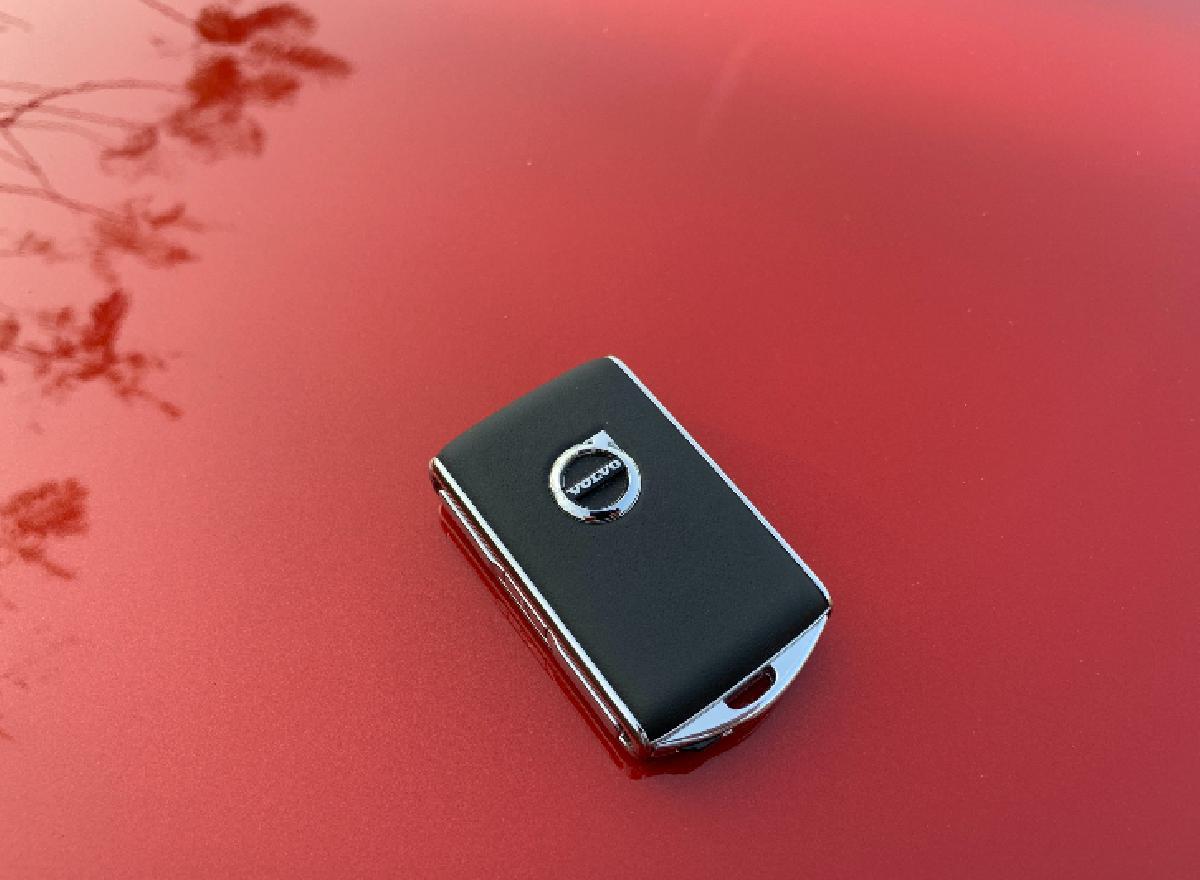 The SUV’s boot is a very interesting space. Sure, it gets the temporary spare wheel, but to fully understand what Scandinavian design is all about, you have to see the foldable floor hatches inside the boot which can be used in the most optimum manner by turning them into any permutation and combination you desire. There’s also a grocery bag holder thrown in for good measure.

A “wow” escaped my lips, the moment I stepped inside the XC40 T4 R-Design. The quality of fit, finish, design and the materials used inside was beyond superlative! Take the design of the door handle for instance, one look, and you know it is Scandinavian design at its best! The Scandinavian design is also evident in other places inside the car, such as the cutting-edge aluminum décor inlays, for instance, which looks stunning. 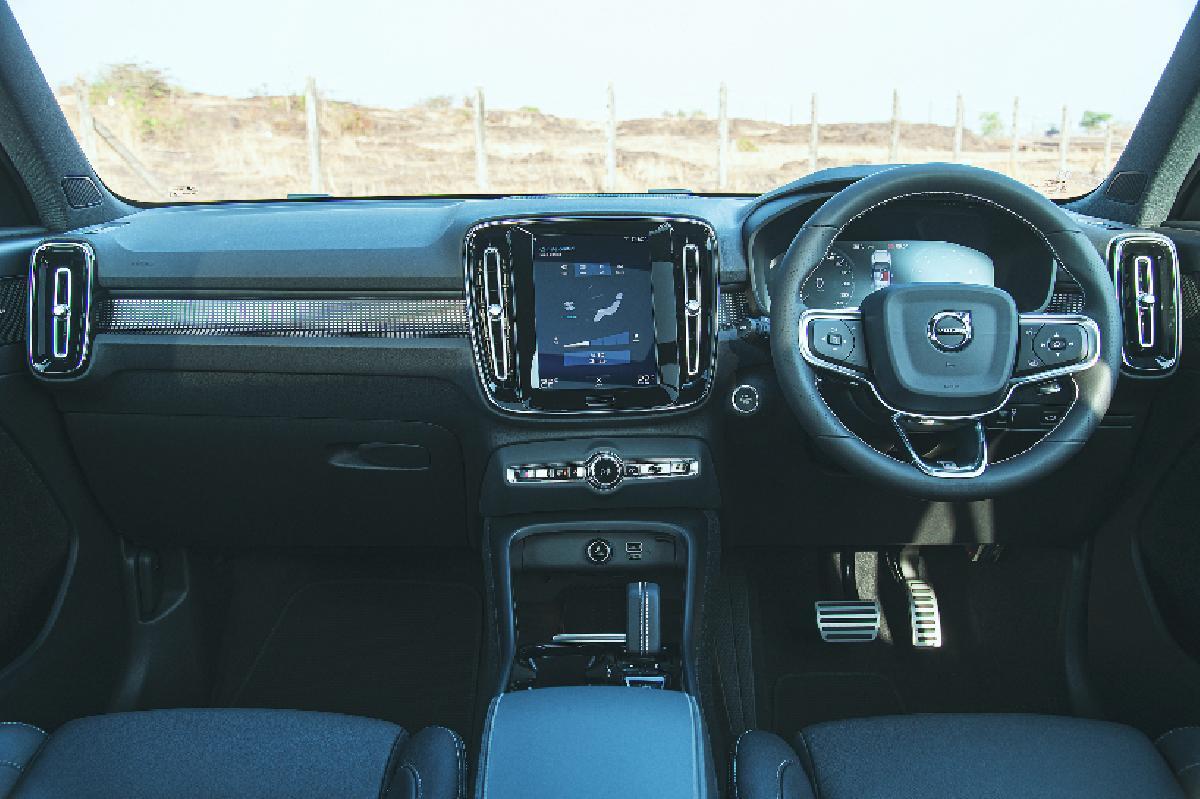 The SUV also gets illuminated vanity mirrors in sun visors on both sides which evidently means, Volvo, hasn’t been tightfisted, and hasn’t skimped on not just the finer, but also on the essential things that truly matter when seated inside a premium SUV such as this one.

Inside a Two-Zone Electronic Climate Control system along with Clean Zone ensures that you’re only breathing clean air whilst seated inside. There is also a beautiful power-operated panoramic sunroof that will make you desirous of opening it and speeding away on the Mumbai-Goa highway the minute you set eyes on it.

The R-Design theme has been carried inside the SUV as well and is evident not only on the leather steering wheel but also on the beautifully contrast stitched leather seats, the gear knob, the floor pedals, the carpet mats, as well as the front tread plates, all of which go a long way in showing the car manufacturer’s attention to detail and to exhibiting the SUV’s premium quality. 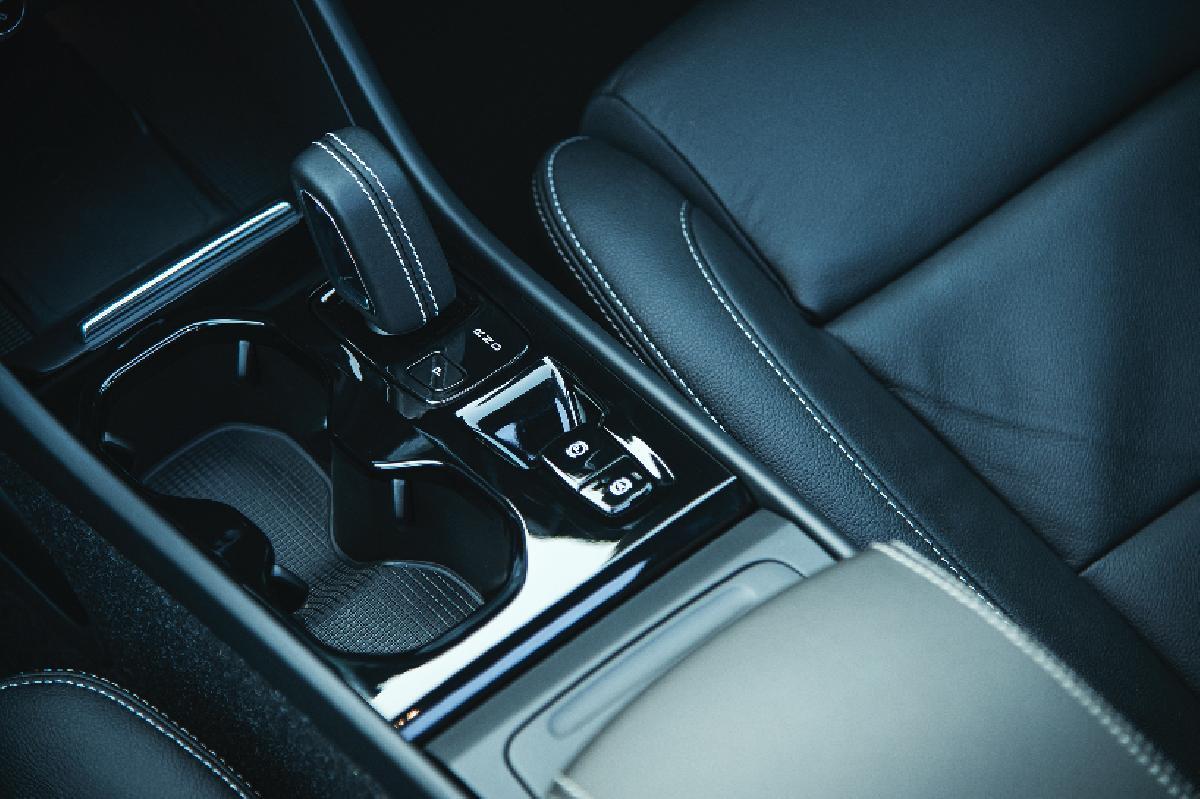 There is also plenty of storage inside. From the storage box under driver’s seat to the Glove box, there’s lots of space for your bits and bobs that can be easily stowed away without leaving you hassled about where you put them away. It’s almost like they’ve managed to create a space for all your knick-knacks. There is also a waste bin that has been provided with a net in front of the armrest for all you litter bugs out there.

The Volvo XC40 Petrol comes strapped with a 2.0 L (1969cc) engine that has been mated to an 8-speed FWD gearbox which belts out 190hp and 300 Nm of torque with a speed limit of 230 km/h. As I started driving, I realized that the driver’s seat and the front passenger’s seat came with a power adjustable feature, but only the driver’s seat had a memory function, nope, I’m not complaining! The paddle shifters in brushed aluminum were enormous but never felt out of place on the SUV, just as it’s retractable mirrors also felt well-proportioned, which made looking into the ORVMs effortless throughout the drive. The instrument cluster boasted a crisp 12.3-inch display that felt so right as compared to the other displays that we have seen in other vehicles. There was also a 9-inch center display with touch screen, two USB and Bluetooth connections, speech function, Apple Carplay and inductive charging for smartphones in the front tunnel of the SUV with a beautifully designed charging mat. (Think Scandinavian design). At the rear, the headrests were fixed but the center armrest came with adequately-sized cup holders. Maroon 5’s Maps blared through Harman-Kardon’s Premium Sound system via 14 speakers as I drove through the winding roads of Goa.

In terms of safety, the XC40 T4 R-Design (Petrol) offers the works! From Driver and passenger airbags, side airbags, knee airbags, to driver’s side whiplash protection as well as belt minders for all seats, in the front as well as at the rear, not to mention tyre pressure monitoring system, it is almost like Volvo has left no stone unturned when it comes to driver and passenger safety. This is precisely why Volvo has been a leader when it comes to thinking miles ahead in automobile safety, ensuring that the highest safety standards make their way onto their cars. The 17-inch front disc brakes are doing duty on the SUV, whereas 16-inch disc brakes are fitted onto the rear. The SUV comes shod with 18-inch Pirellis and 5-double spoke matt black diamond cut alloys that truly look stunning and the ride quality is simply magnificent, as if you’re just gliding on a glass surface. No jerks or bumps were felt throughout the drive on Goa’s roads which are for the most part in pristine condition, however, it must be said about Volvo vehicles that there can hardly be a reason to complain about their ride quality which easily surpasses other vehicles in its class. 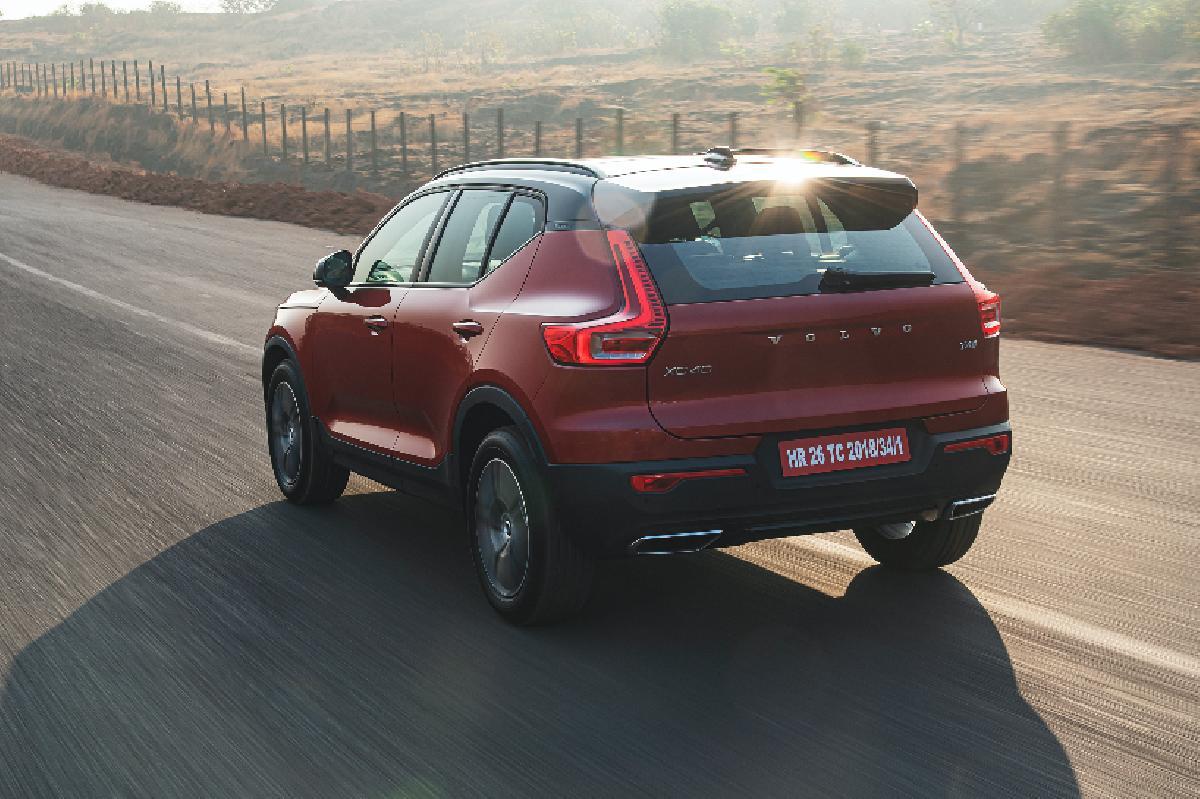 The XC40 T4 R-Design (Petrol) is not a wildly exciting SUV that is begging to be redlined, but then, it was never meant to be. However, it is one of the safest, most practical and a very stylish SUV that money can buy. If you are one of those who thinks that safety is of paramount importance for you and your family, this is the SUV you will definitely want to test drive before you consider any of its rivals, and in all earnestness, you will come away pretty pleased with your choice after you’ve taken this SUV for a spin. This is a no-nonsense SUV with a very high safety and style quotient and it will give you many years, maybe even decades of service, if maintained well. So, if you’re in the market for a premium SUV in the price range of around 40 Lakh, the XC40 T4 R-Design might just be the one you’re looking for. Buy it. Rest assured, you won’t have a moment’s regret.