The facelifted Maruti Suzuki Swift 2021, gets more than just a nip and tuck job, and we're lovin it.

Maruti Suzuki India Limited (MSIL’s) much-loved Swift, introduced in India, in 2005, has gone on to sell over a whopping 2.4 million units so far. Now, in its third generation, the Swift 2021, has received a facelift which is more than just a nip and tuck job. We took this hatch, also popularly known as a “true driver’s car” for a spin, and came away impressed with it, yet again. They say, you can’t go wrong with the Swift. We couldn’t agree more.

You may recall the time when the Swift arrived on the Indian scene. It was a time when Maruti Suzuki’s other hatch, the Zen, was beginning to look dated, and when other new hatchbacks such as the Chevrolet U-VA, for instance, was getting ready to burst on the scene, around the same time. In fact, it wasn’t long after the Swift’s arrival in (2005) that the Zen was discontinued (2006), but within months of that happening, the Zen, was brought back in a completely new avatar as the Zen Estilo. However, by then, several Indians had already taken a shine to the newly launched Swift, on account of it being a terrific overall package, thanks to various factors but primarily because it delivered on several aspects such as space, drivability and most importantly fuel efficiency, thereby ticking all the boxes and making it the go to car for lakhs of Indians over the coming years.

Fast forward to 2021. Now, the Swift 2021’s changes remain subtle, however, the one big change that it has received is its new engine. (More on that later.)  While the primary design of the Swift 2021 remains the same, a few touches which have been added lets onlookers know that this is the new facelifted version. For starters, what the Swift 2021 gets that sets it apart completely from all the previous generation Swifts, is the dual tone roof, (Think Blue body and white roof) which looks really cool. It also gets black ORVMs as opposed to body-coloured ORVMs that blend seamlessly with the hatch’s overall design. Then, there is a cool-looking, new mesh grille, which has a chrome bar running midway across its breadth that splits the grille into two. The chrome bar sits just below the logo (also in chrome) and it breaks the visual monotony of the otherwise gaping black grille rather nicely. 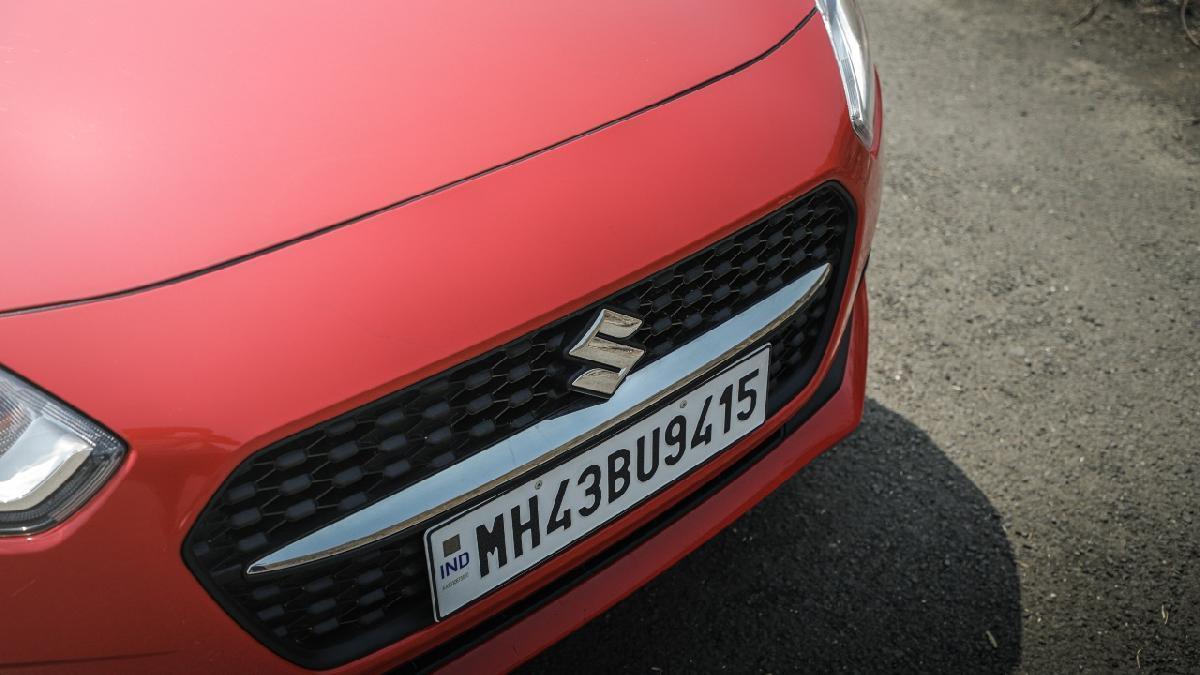 The headlamps haven’t changed much and now, besides the projector lamps and turn indicators, you can also see the DRLs on them. 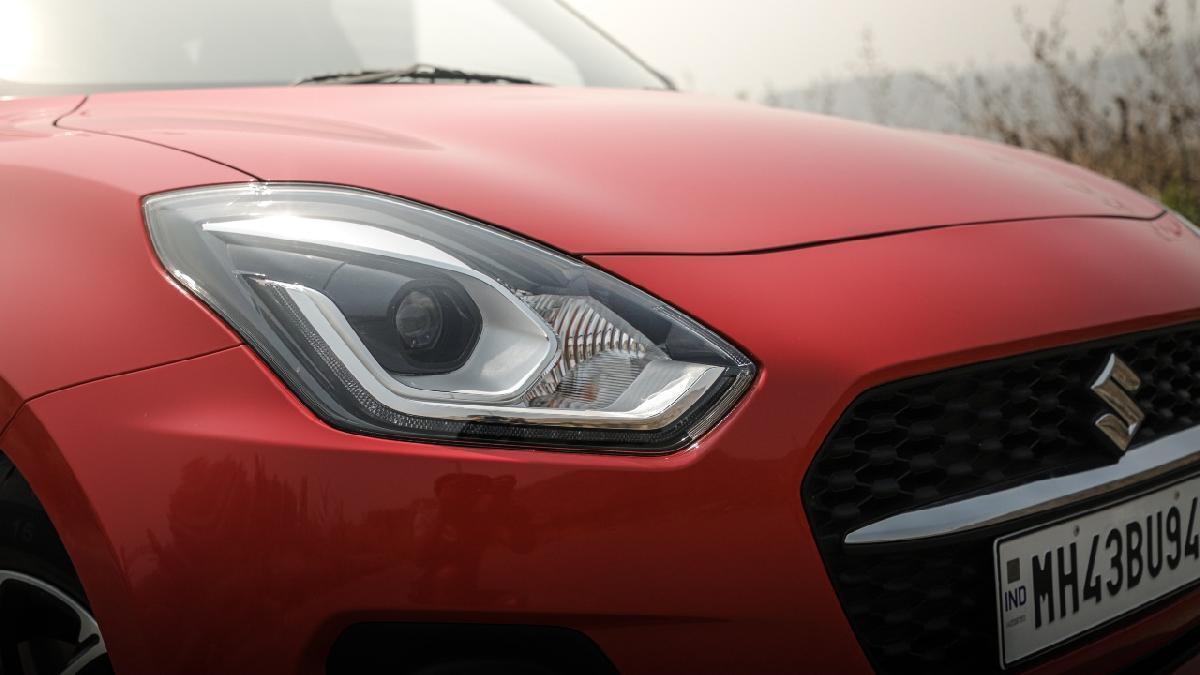 Meanwhile, the fog lamps sit in a black housing below the headlamps giving the overall front fascia a slightly different look from its predecessor. 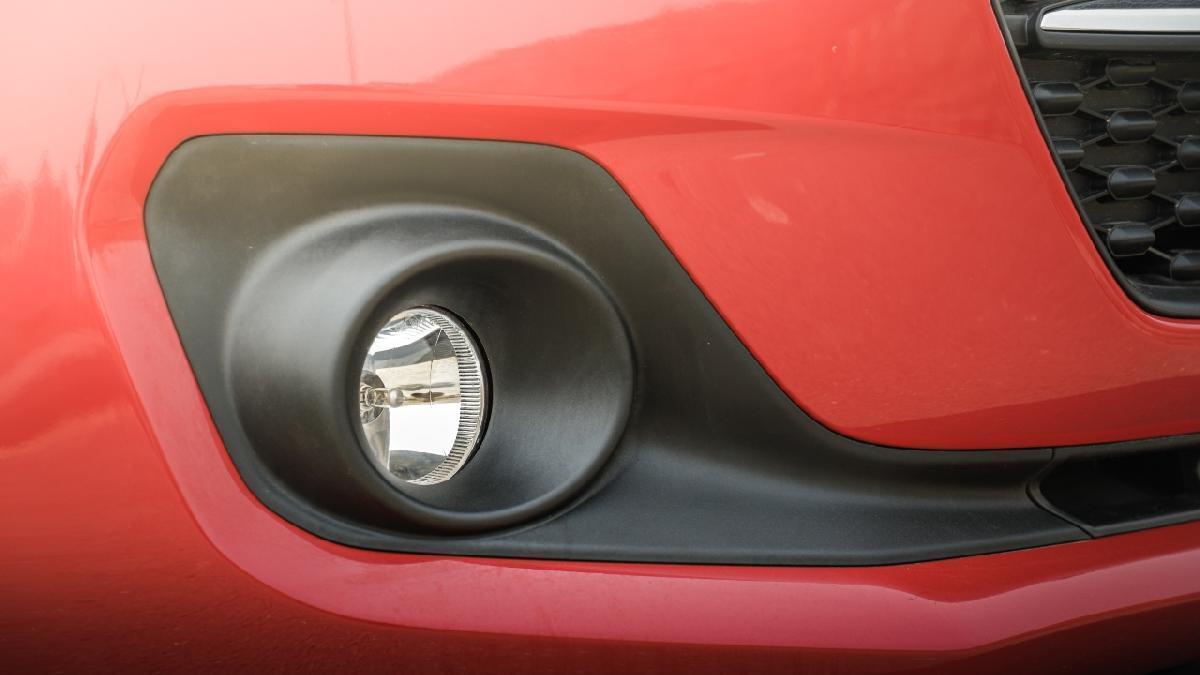 Another hint of change that the exterior gets is to the rear door handle, the design of which is set partly in the C-pillar and partly in the window frame of the rear door reminding you of the Chevrolet Beat, which was the first hatch to introduce it in India following which several car manufacturers cottoned on to the trend. 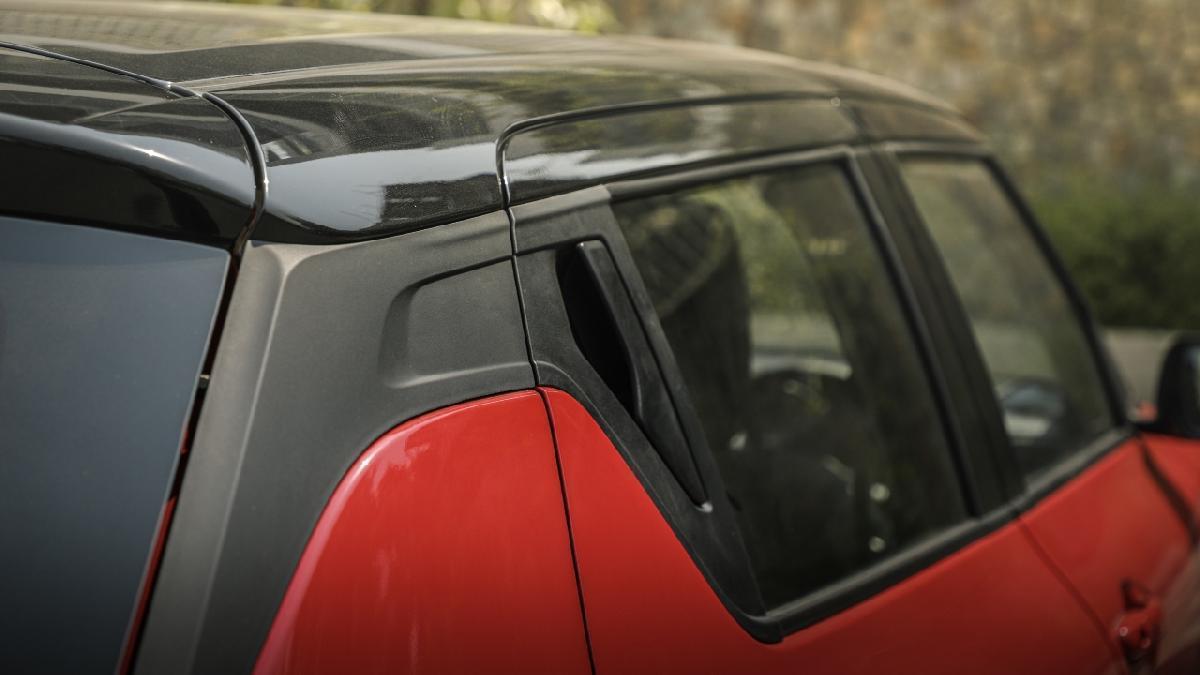 There is nothing fancy about the 16-inch alloys however, they don’t look out of place on the Swift 2021. 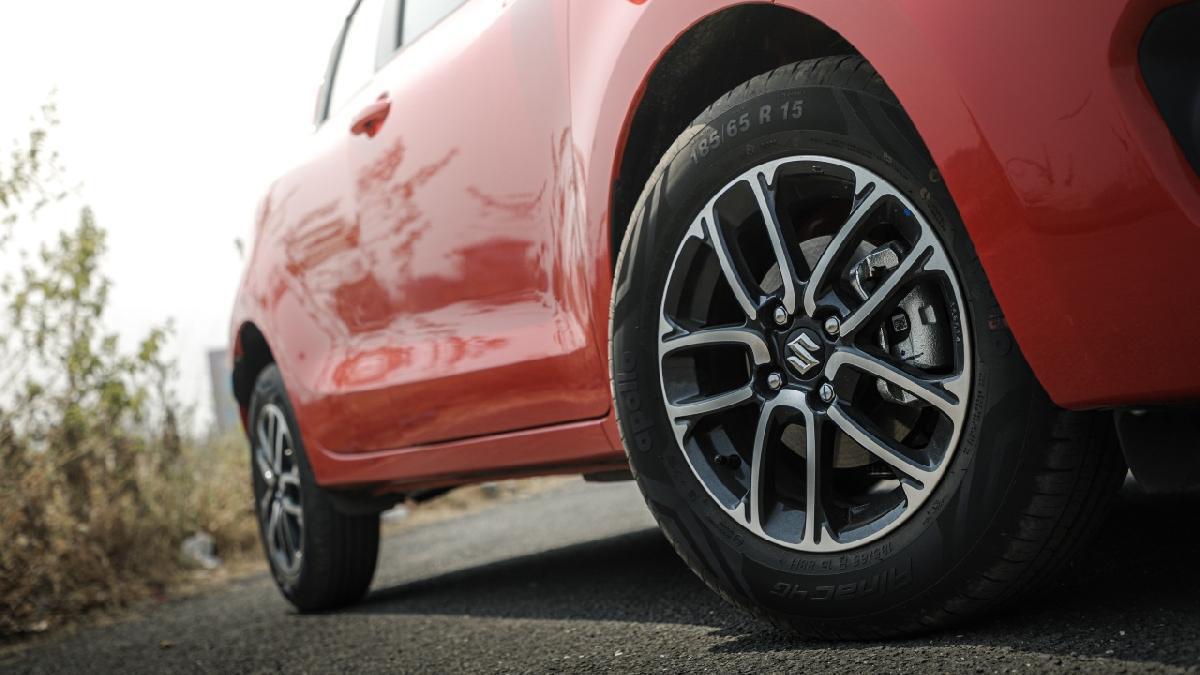 The boot gets a slightly high loading lip and comes with 268-liters of boot space which is spacious enough for more than a couple of medium-sized bags that can fit in there easily. 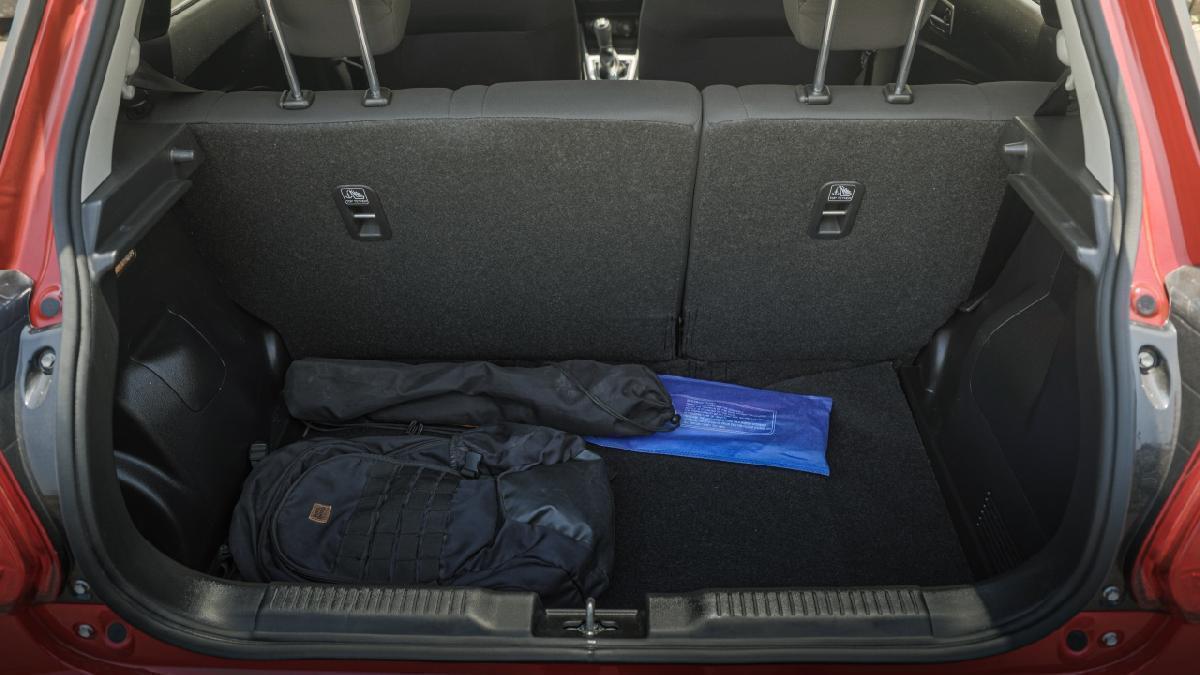 Inside the cabin, what you get is the same grey-tone dashboard that houses the SmartPlay Studio Infotainment system which has various colour blocks and can be operated swiftly via the touchscreen user interface. 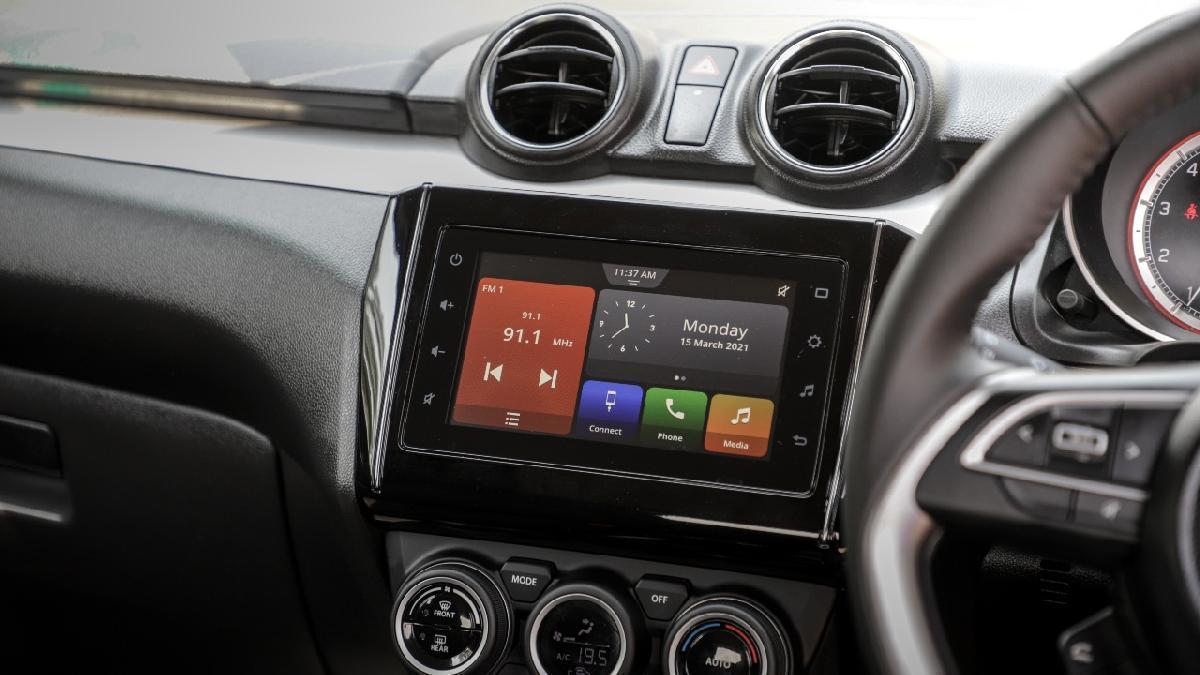 There is also a reverse parking camera behind, which isn’t the sharpest out there but does a fairly good job giving you a view of everything that is behind your hatch – a real boon while reversing. We also quite liked the pod-styled instrument cluster which now comes with a cool MID that you gives you vehicle-specific data. The easy-to-read dials on the tacho and the speedo were always a big plus on the Swift and now, they come with red accents which look cooler. 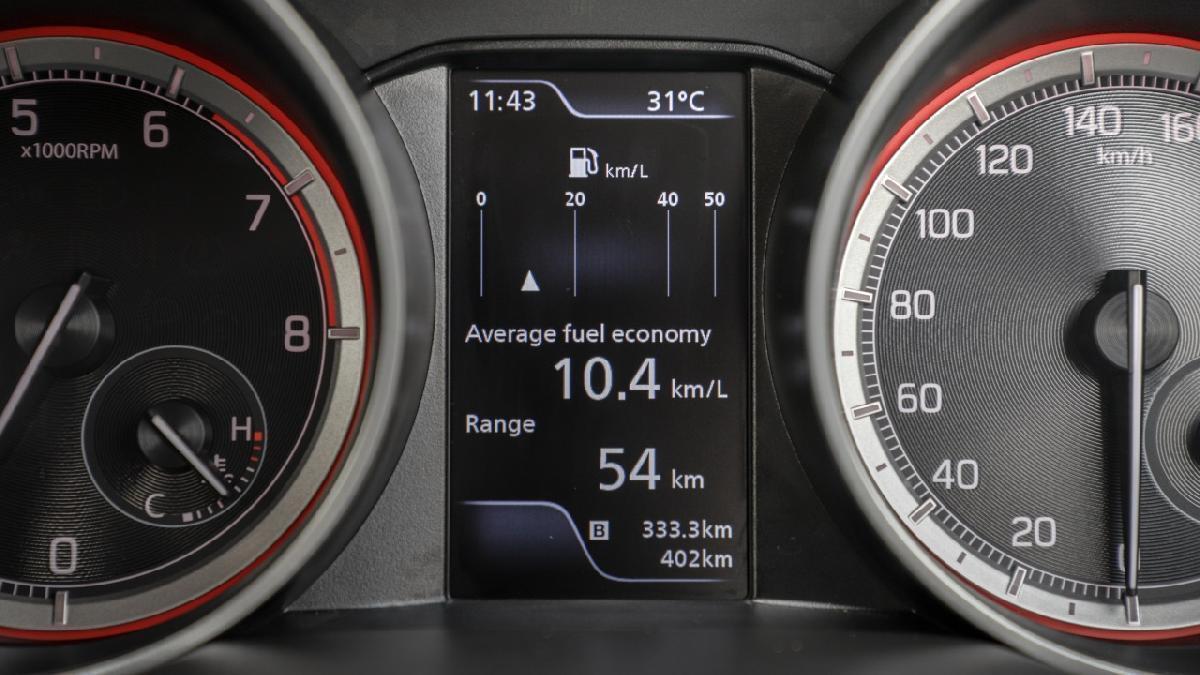 The knobs and switches in the car are good quality plastics and the feel of turning the air-con knobs is a truly satisfying one. 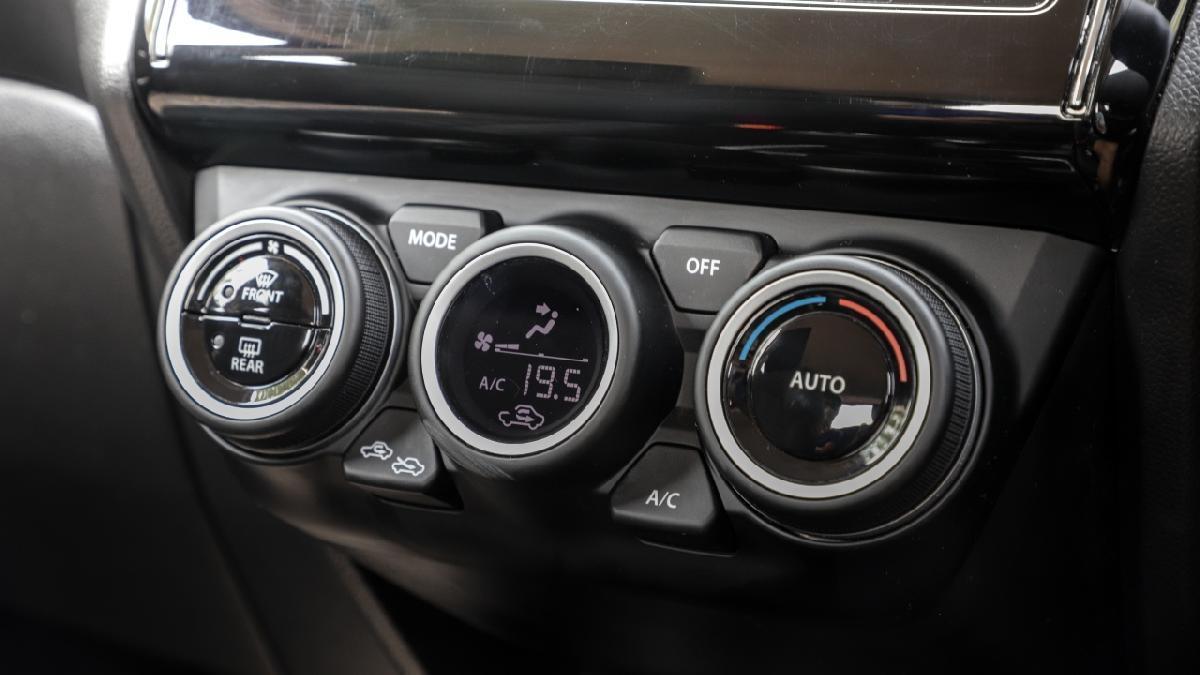 What you also get just below the dash is a 12v charging socket along with an AUX port. Besides, the round-shaped air con vents are adequately sized and look sturdy, not the kind to break easily, and they dispense air in a satisfactory manner as well. 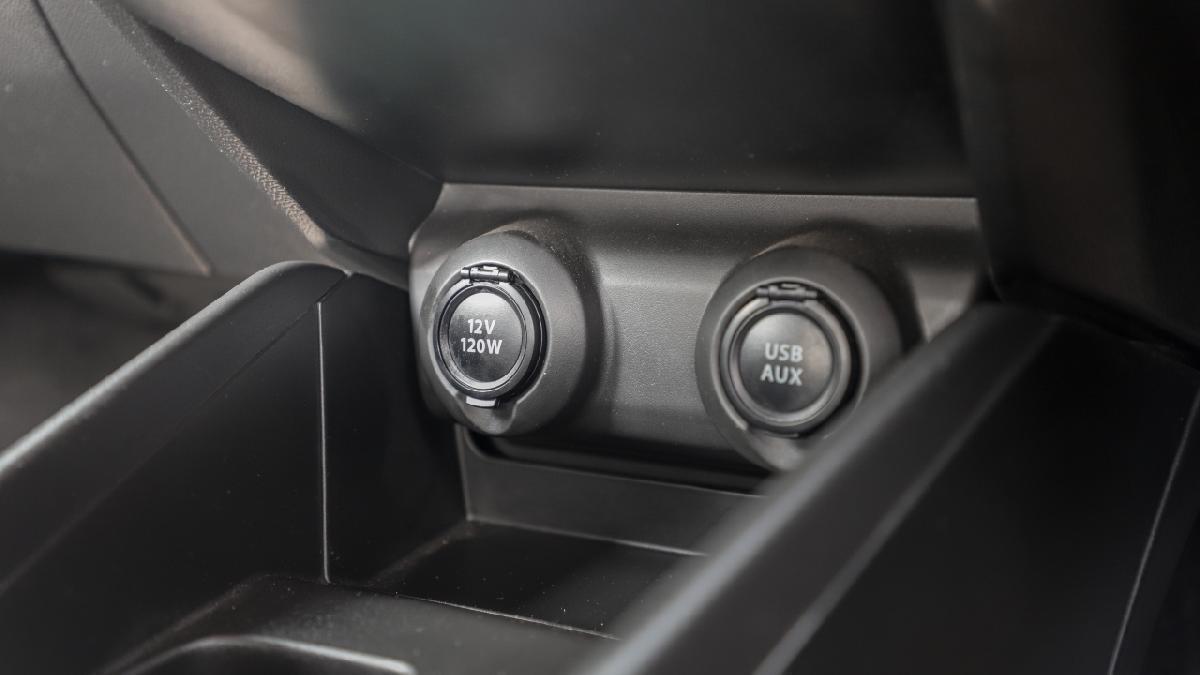 The glove compartment is adequately sized and you can keep your car’s user manual in there besides a few other knick knacks. There are also well-designed cup holders for your beverage inside the car and the doorpads (both front and rear) can also easily carry one-liter bottles so you can ensure that you always stay hydrated. 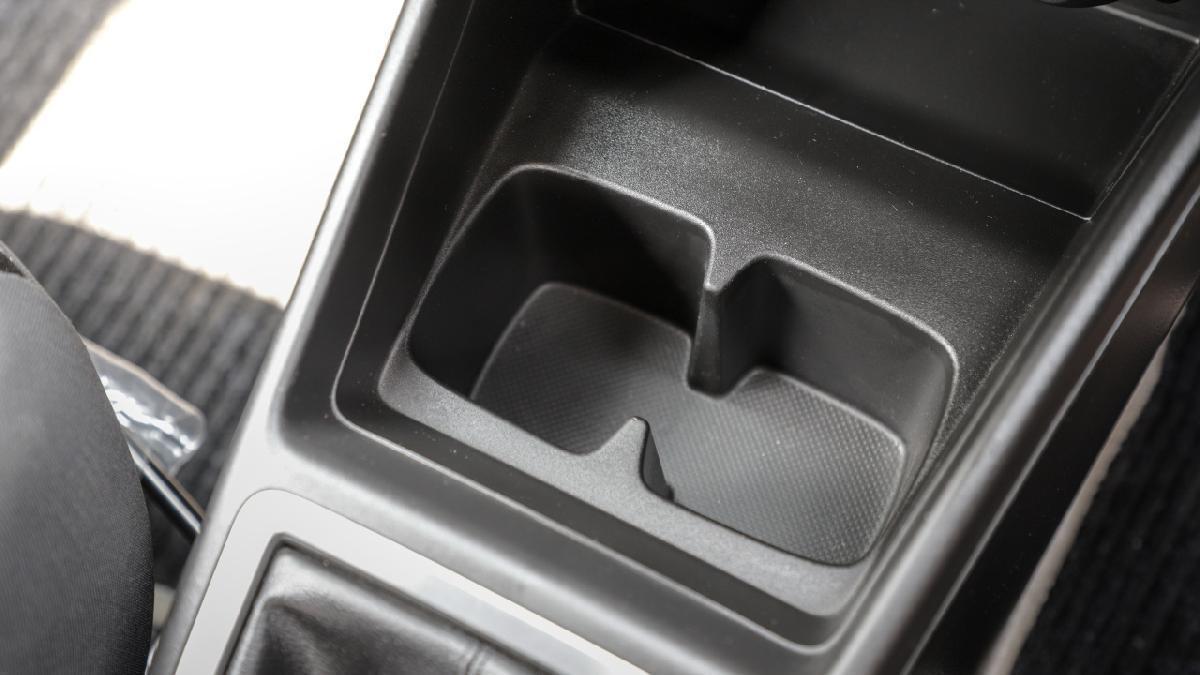 The Swift 2021 also gets new fabric upholstery in light steel grey, which gives the cabin an airy feel and while the rear seats do feel a little too upright, they aren’t uncomfortable at all. In fact, there is enough leg room as well as headroom even for rear seat passengers. In terms of overall fit and finish, you won’t be disappointed as there is very little to dislike in the Swift 2021. 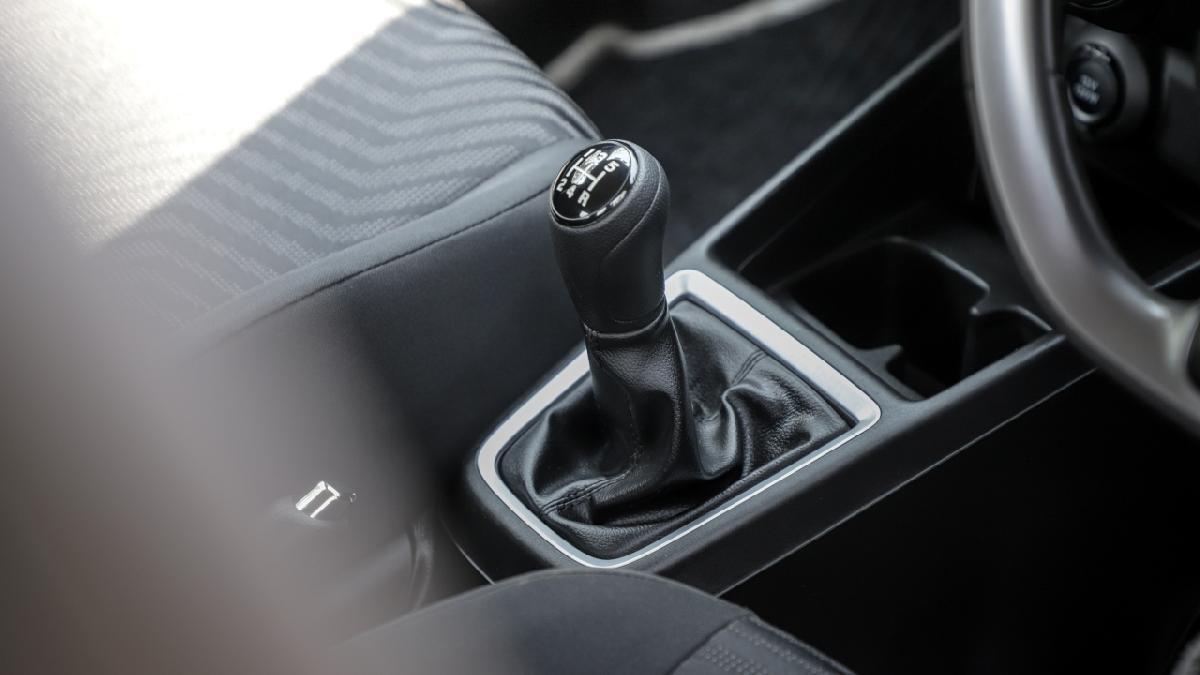 This hatch is quite quick off the mark. Plough through the gears and you will soon realize that the Swift 2021 is a lot of fun to drive. The tall gearing makes accelerating and pushing it harder a lot of fun. While the tacho is redlined at 6300rpm, you can feel the surge of power almost immediately after crossing the 2000rpm mark and once you’ve crossed the 4000 rpm mark, that’s when the real fun begins as you see objects flying past in your ORVM. The extremely responsive and rev-happy K-Series engine, performs brilliantly and while that has always been the strength of the Swift, this new engine series takes it a notch higher. Not only does it pull beautifully but we were also impressed with the manner in which the gearshifts happened ever so smoothly without the slightest notchiness. Both upshifting and downshifting was never a problem, neither in the city nor on the highways. Also, the fact that the hatch gets a light steering works tremendously in its favour. Besides, what you also get now, is the Cruise Control option and once you set it to a speed limit of your choice, it should take the fatigue factor completely out from your daily commute. 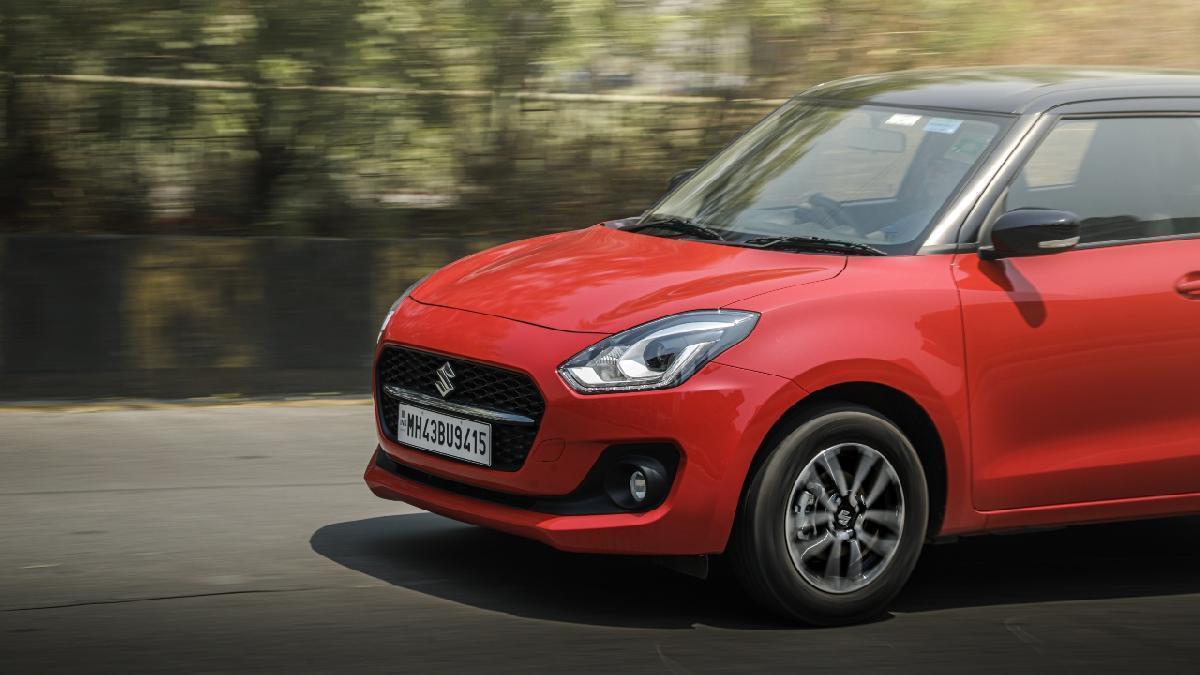 The Swift 2021 is a tight little sure-footed hatch. It offers a good ride quality making it a good city and highway companion. The fact that it is a lot of fun to drive combined with the fact that it offers even better fuel efficiency (23.20 kmpl - ARAI figures) than before, makes a strong case for it. 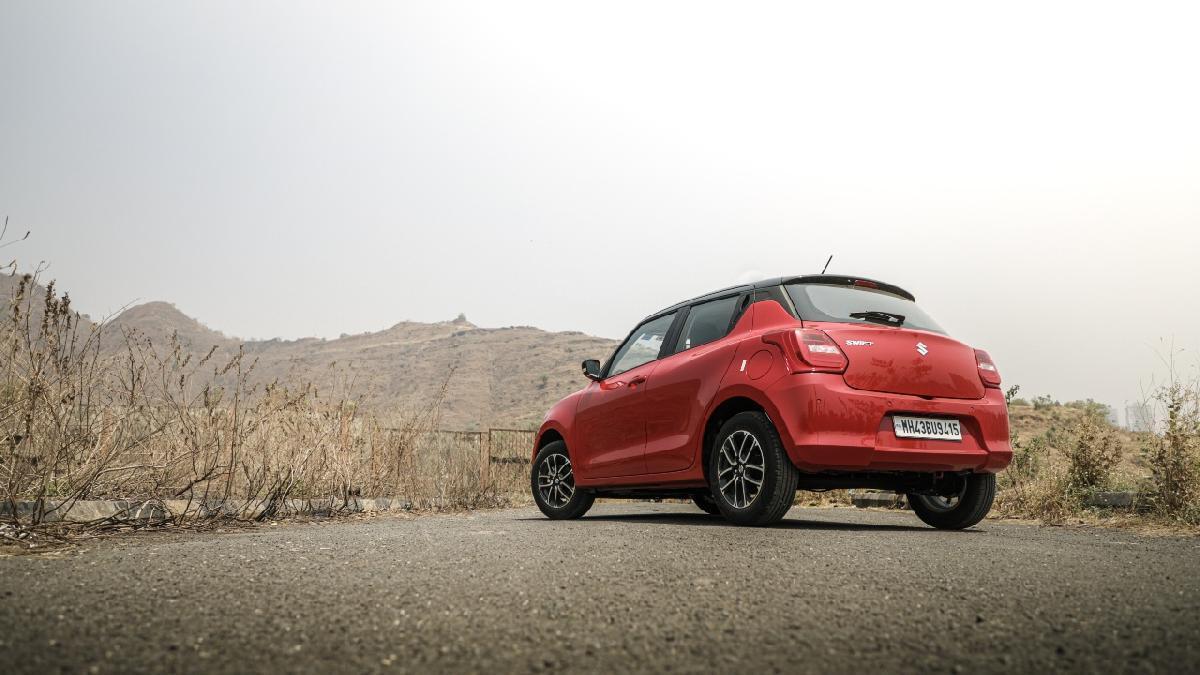 Of course, if you’re in the market for a good hatch and are willing to cough up anything between INR 6-9 lakhs, the Swift 2021, makes for a great choice and yes, while there are now even compact SUVs that you can buy at the same price point, you know only too well, the conveniences of maneuvering a hatch around. We do wish there were some more upholstery options on the Swift 2021, but then we can wait for another refreshed model but until that happens, all those of you who are wanting to buy a hatch, do take a testdrive of this one, we assure you that you will not be disappointed.