The all new Mahindra Thar is a different beast altogether and we just can’t wait to engage its 4WD.

Raw, bold and powerful is what the new Mahindra Thar is, and once you get behind its wheel, you will be loath to climb back into your own car, because frankly, few urban cars of today offer the thrill that can match what the Thar is capable of. Yes, the Thar whose legacy harks back to the Willys Jeep, is a different beast altogether.

The Thar is a handsome hunk, the type that gets you grinning from ear to ear the moment you set eyes on it. And on one such beautiful morning as it stood tall in front of me, freshly cleaned, sanitized, looking every bit capable of unbelievable adventures, I found that I actually had to stop myself from day dreaming about some real off-road fun that I could have with it because though I had the keys to the Thar, it was for a limited time and with explicit instructions about refraining from engaging the 4WD mode. Sigh! It was just going to be the tarmac this time around. Nevertheless, I decided to make the most of it.

I climbed in, (yes, you actually climb into the Thar), and before cranking the 2.2-Liter mHawk 130 diesel engine, (The Thar also comes with a new 2.0-Liter mStallion 150 petrol engine) I glanced around the cabin and admired the cabin’s rugged finish, saw the Thar’s metal plate, prominently displayed on the left hand side of the dash, just below the grab handle, adjusted my seating position and ORVMs and soon set off. 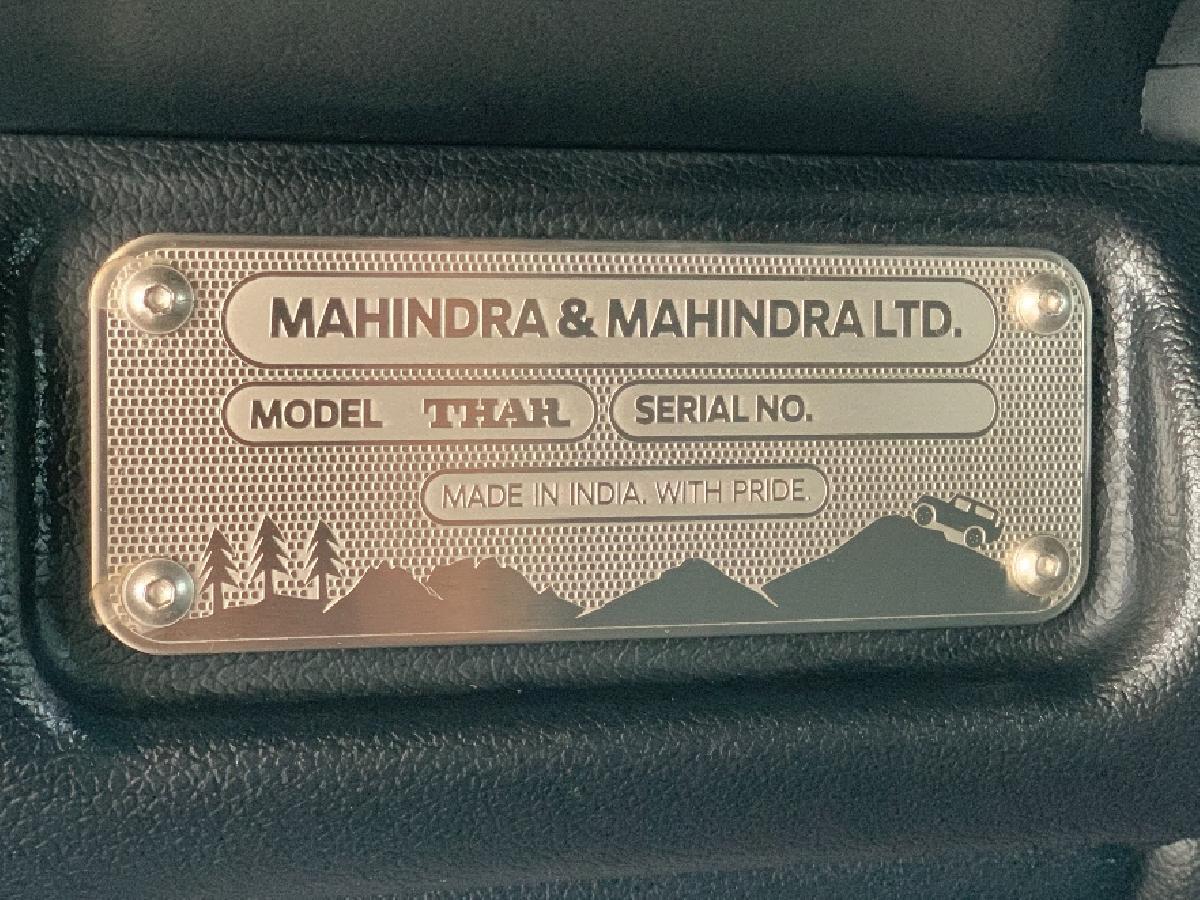 The security signed me out of the Mahindra’s Kandivili plant and just outside their gate, on the Western Express Highway, as I was about to join the road, I saw a sight that I will not forget in a hurry. A BEST bus, packed with commuters (Social distancing be damned), passed in front of me, and inside, at least a dozen jaws dropped, on seeing the new Thar. The Thar’s road presence and stance, combined with massive 18-inch alloys under those wide fenders had really managed to make quite an impact. The people on the bus kept ogling at it and a handful of them, I noticed, even turned their heads simultaneously, in the direction of the Thar as I got it onto the highway, and managed to race ahead of the bus. 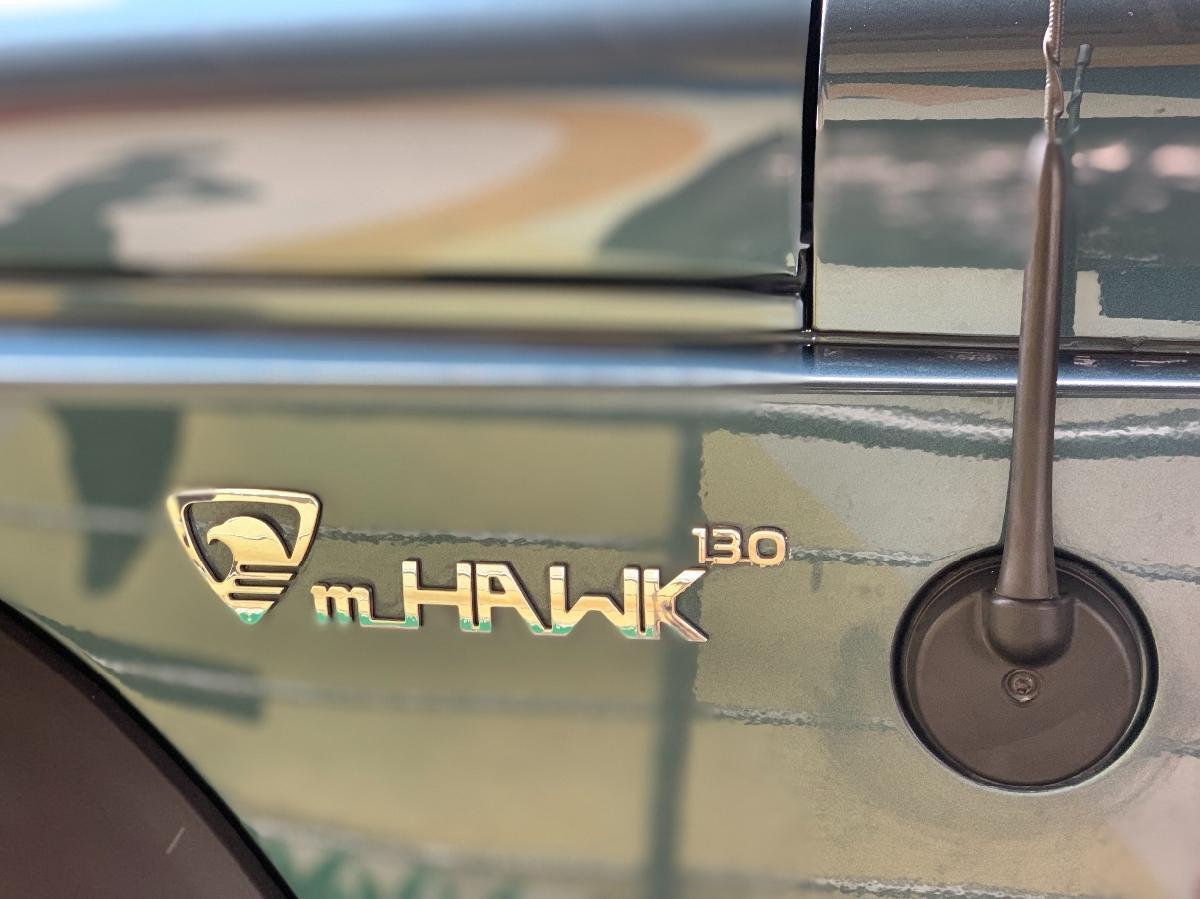 Now, the Western Express Highway is a rather long stretch of highway, and from Mahindra’s Kandivili plant if you turn left, it will take you to Bandra and further down all the way to South Mumbai but if you turn right, it will take you to the other suburb of Thane, which is where I was headed. Below a gigantic flyover, I changed lanes, came to an opening, from where I made a complete U-Turn. It is while making this U-Turn, that other cars, on seeing this beast, stopped – out of sheer respect, allowing me to complete the U-Turn absolutely hassle-free. Ata boy! I was hugely impressed with the ease with which the Thar handled that U-Turn on a packed highway during morning rush hour. The Thar was occupying so much real estate on the road that nobody even dared overtake or slink in from either side, they all stopped and let the Thar do what it was doing. 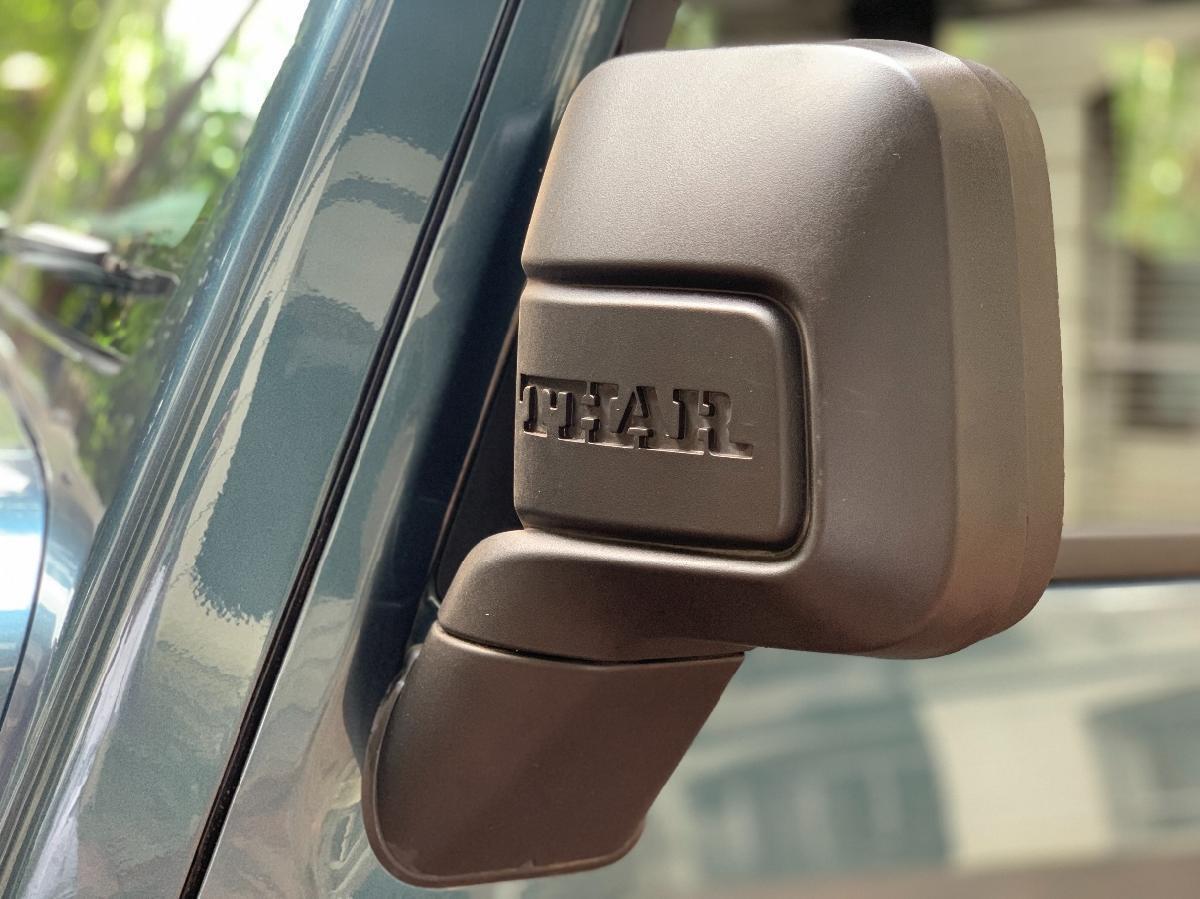 Now, that I was headed in the opposite direction, there were stretches of the highway which were busy with several cars on it and then there were parts of it that were relatively free.  It was only after a signal and a couple of bottlenecks ahead, when I was able to finally start ploughing through the gears, did I understand what the Thar truly felt like. As I found myself slotting the gears into higher gear slots, the performance of the Thar kept pace in what can best be described as perfect sync with the right gear in the right speed. The gearbox wasn’t notchy, (I’ll admit, I had half expected it to be), and the gearshifts were surprisingly swift. The power delivery was linear throughout. Infact, very quickly, I noticed that in the fourth, fifth and sixth gear, it almost felt as if the Thar was flying on the highway, but never once did it feel unstable or out of control. In fact, it felt solid, sturdy and in complete control at all times. However, I couldn’t keep the Thar in the higher gears for too long as up ahead was a Toll booth with several cars waiting to pay up and cross over. I slowed down. I gauged from what I saw in my rearview mirror that the Thar, was inviting a lot of adulatory looks. People in other cars at the toll queue were clearly commenting and passing remarks on the Thar, it was easy to tell. 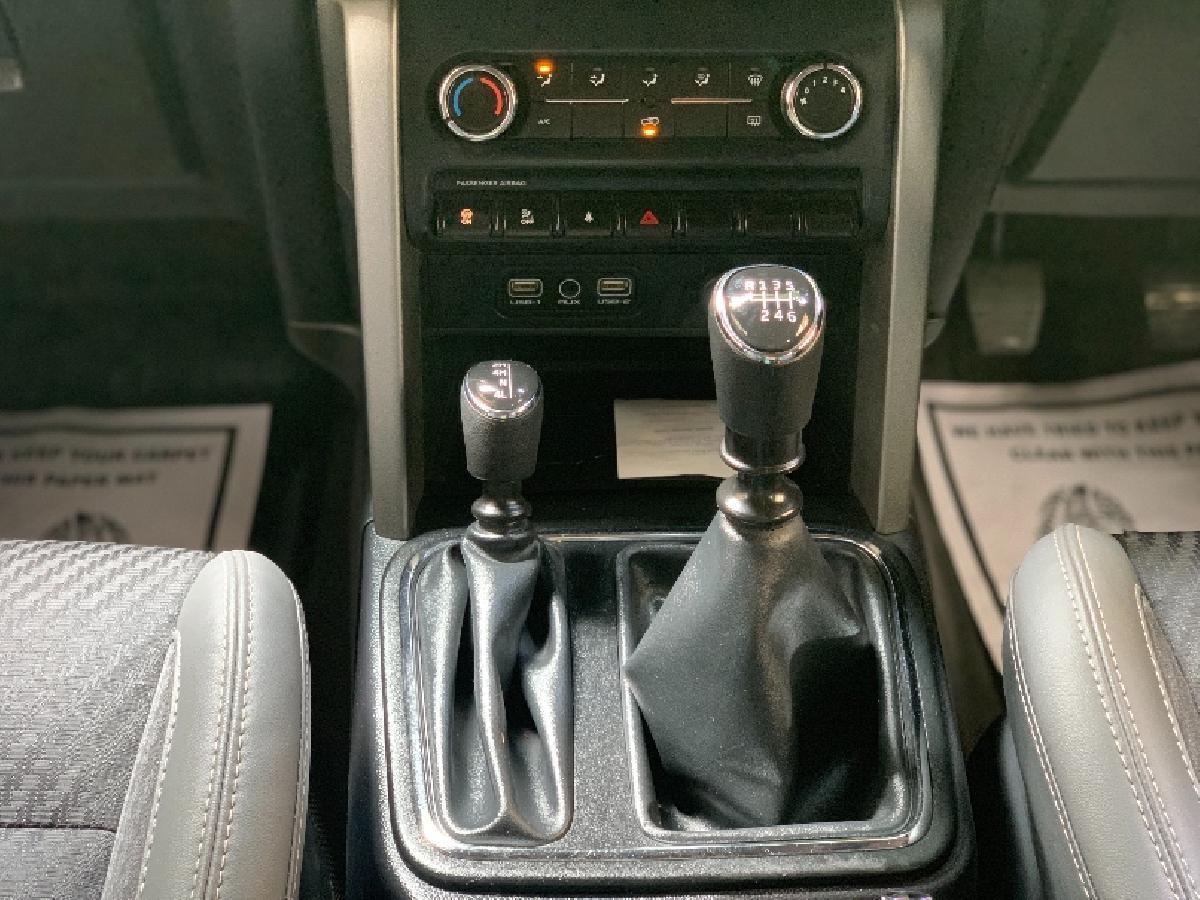 The Thar at 1820 mm is wide, and I actually had to crane my neck, to ensure that the it passed through the Toll gates without grazing against the parking cones that were placed at the entrance of the toll gates. Turned out that I didn’t have to worry at all. 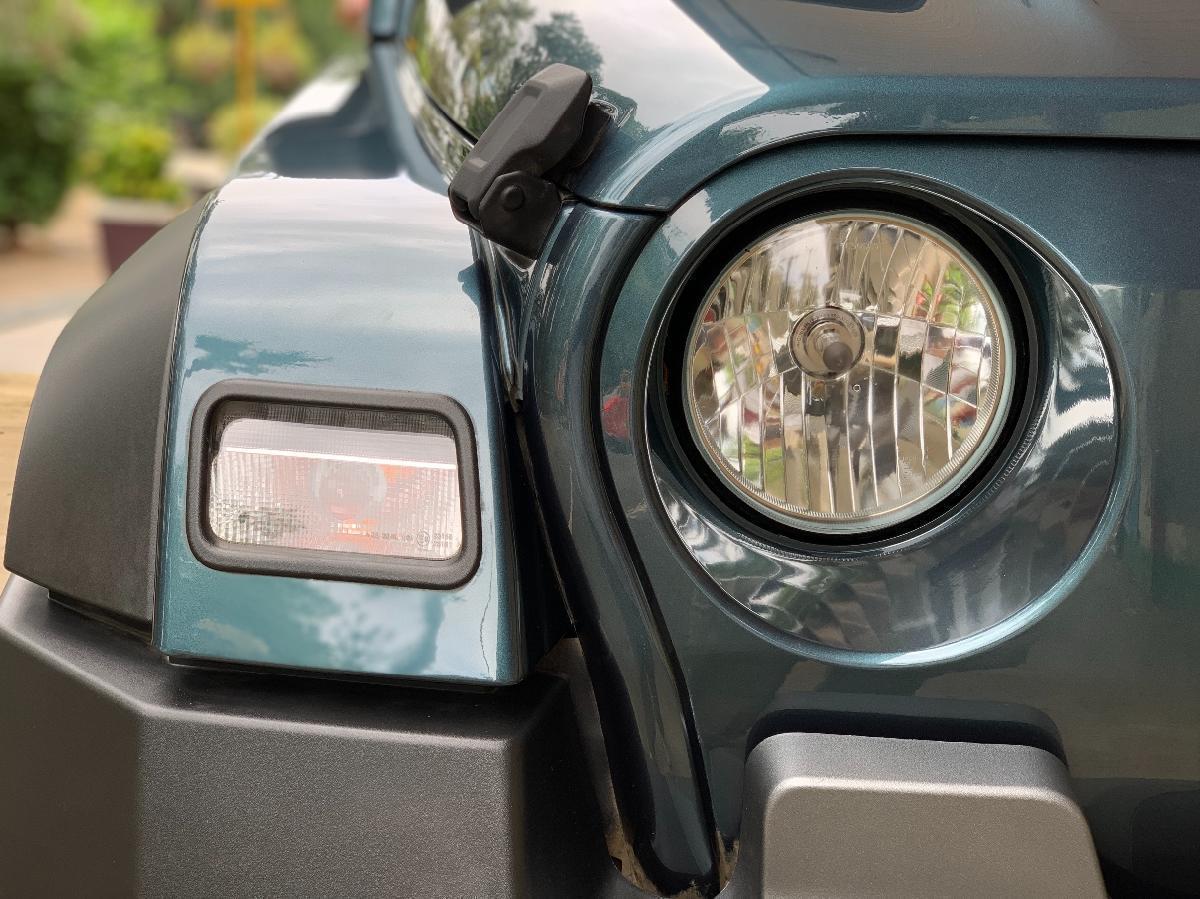 After the toll booth, again, I found myself on an open road, leading up to Thane, and it was here on this open road that a hatchback attempted to race with me. My heavy right foot quickly demonstrated the prowess of the new and light 2.2-Liter (2184cc) mHawk all-aluminum engine that has been mated to the 6-speed manual gearbox that belts out 130 bhp@3750 rpm and 300 Nm of torque @1600-1800 rpm, and soon enough the hatch was a mere speck in my ORVM. Further ahead, a family in a mid-sized sedan, stuck their heads out to take in the Thar. The driver attempted to make some conversation regarding the price of the Thar but as the prices haven’t been announced yet, I had nothing to tell him. Further ahead, a couple on a motorcycle overtook me and the guy gave me a Thumbs up as he rode ahead.

The inside of the Thar is akin to living in a pent house with really high ceilings. The roof of the Thar has ridges in it and the speakers have been wired into the roof, slightly behind the driver and front passenger and they do sound fairly good. 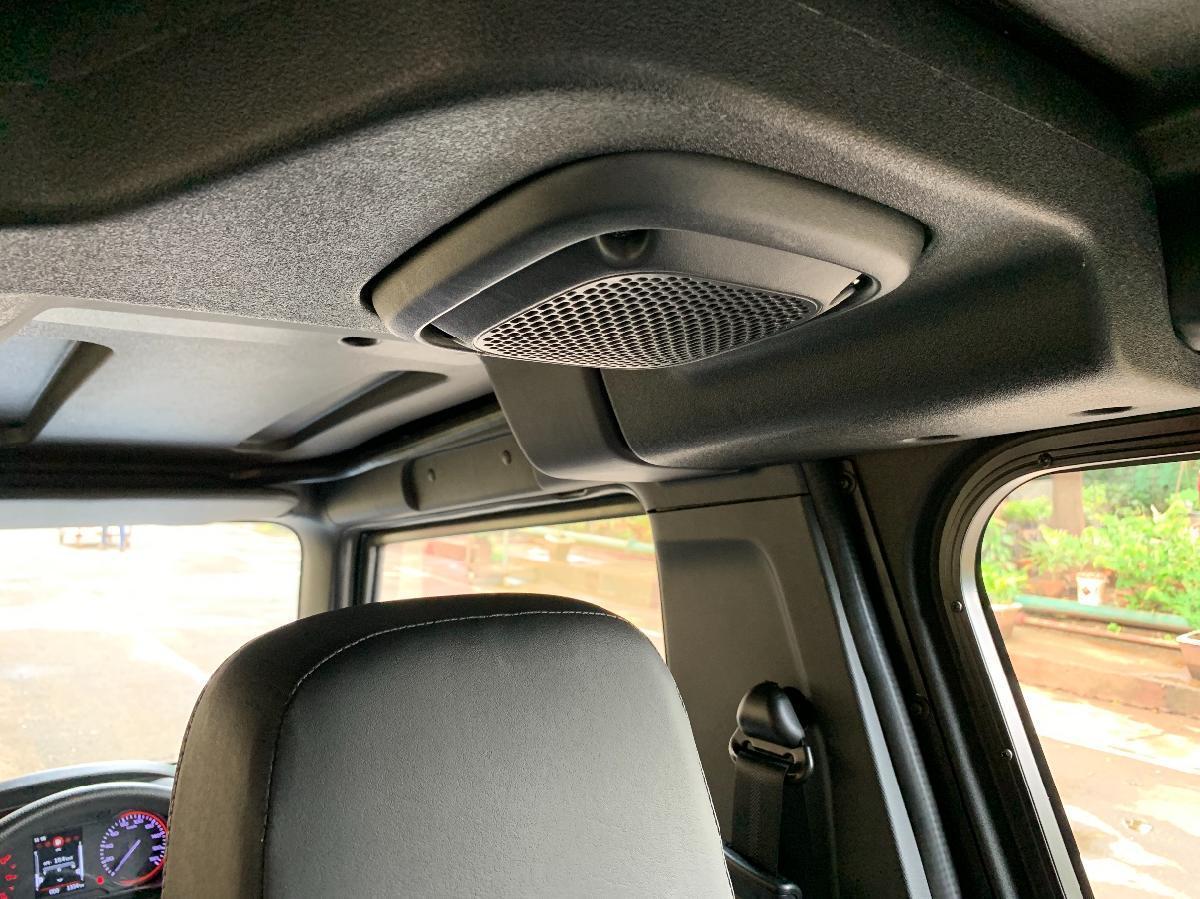 In terms of space, you can rest assured that it will never be an issue for anybody, whether you are seated in the front or at the back, there is plenty of head, leg and shoulder room available. However, getting to the seats behind is a bit of a task with the front seat pushed forward all the way and folded down to ease ingress and egress. The Thar has ditched the old seating style and this time around what you get are front facing seats which seem to have a slightly lower seating position but are not uncomfortable. 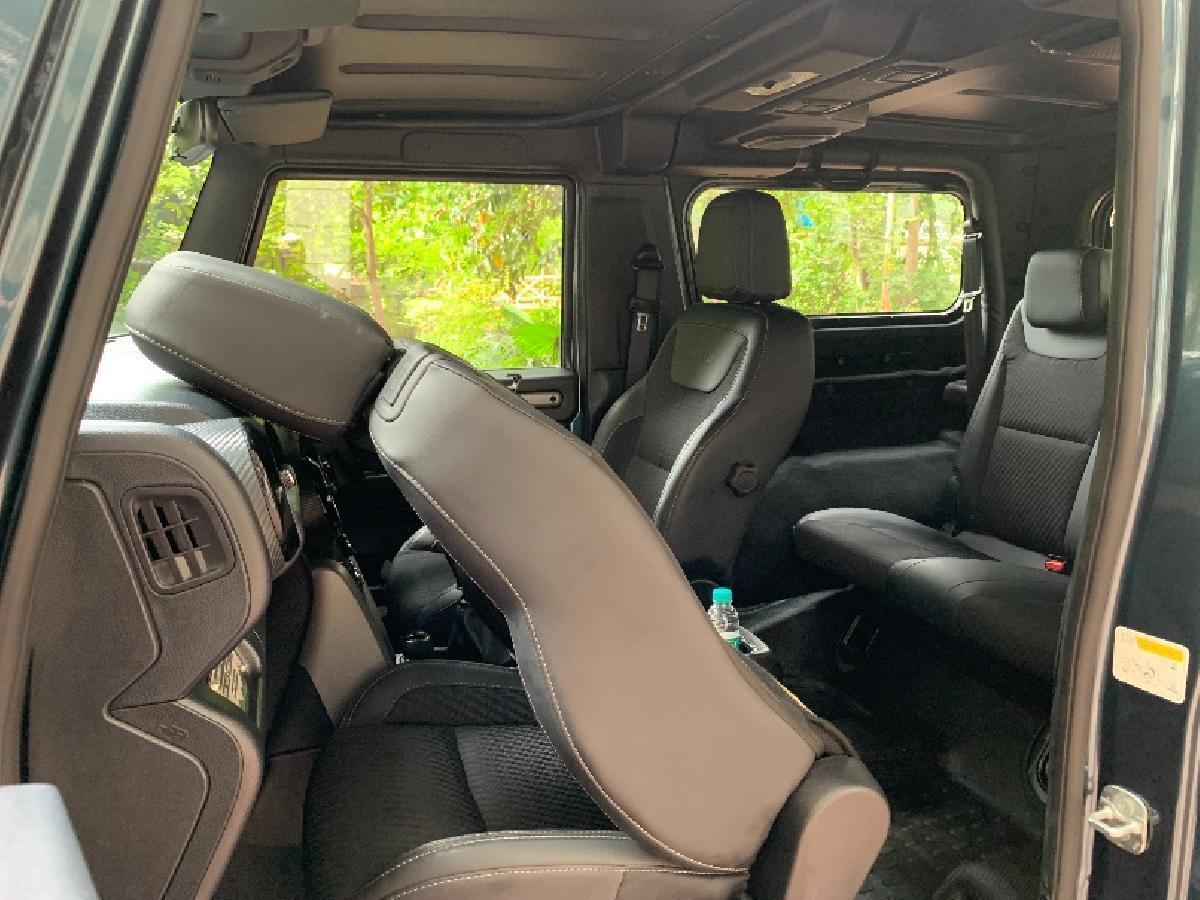 There is also a 7.0-inch infotainment system that gets a touchscreen with Apple Carplay and Android Auto. There is a lot of information that has been made available via the infotainment system that lets you keep an eye on all the capabilities of the Thar, at all times, especially when you go off-roading, but frankly, due to paucity of time, I could barely delve into it. 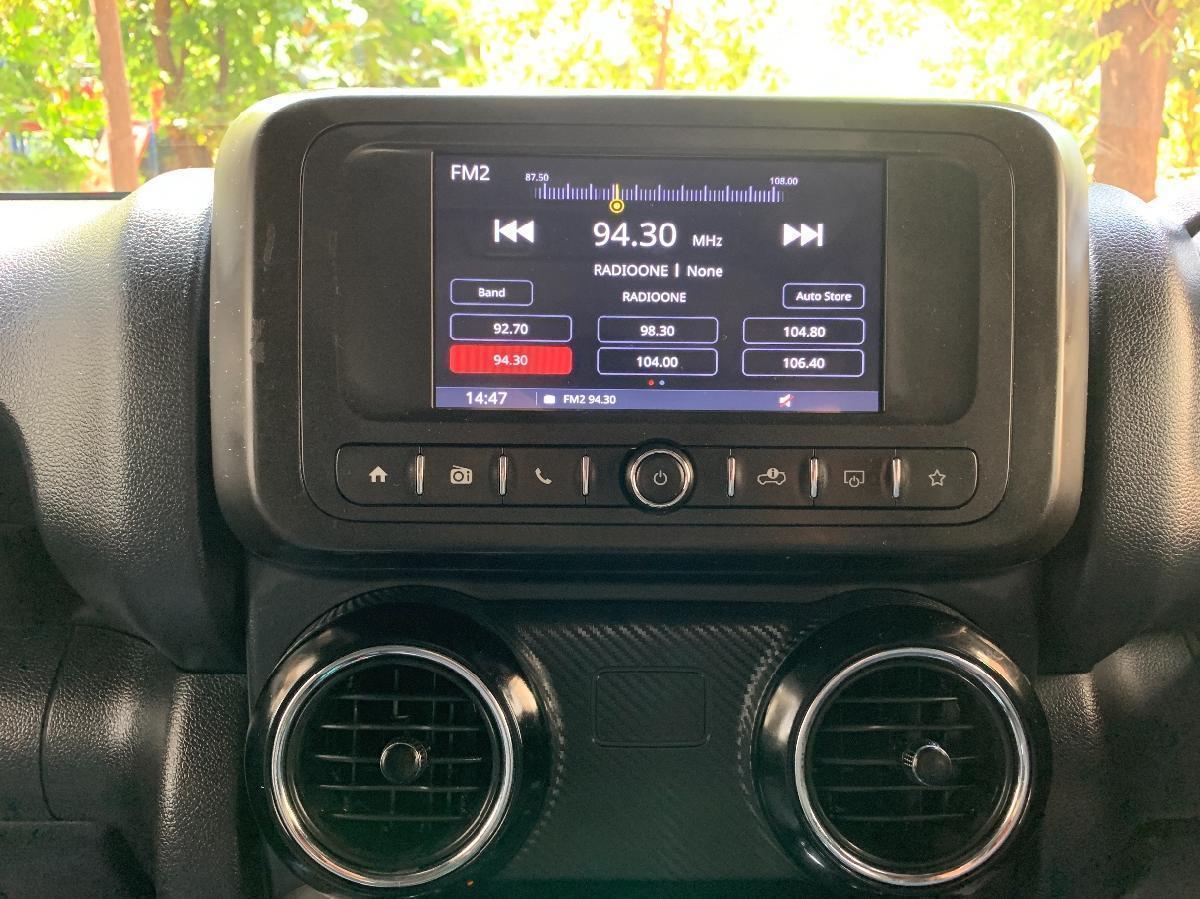 The Thar gets some rugged interiors that seem to have been built to withstand all kinds of climatic conditions. So, whether you want to take the Thar to the beach or to the snowy Himalayas, all that the interiors will require is a wiping down with a damp cloth and it is clean again and ready for your next adventure. 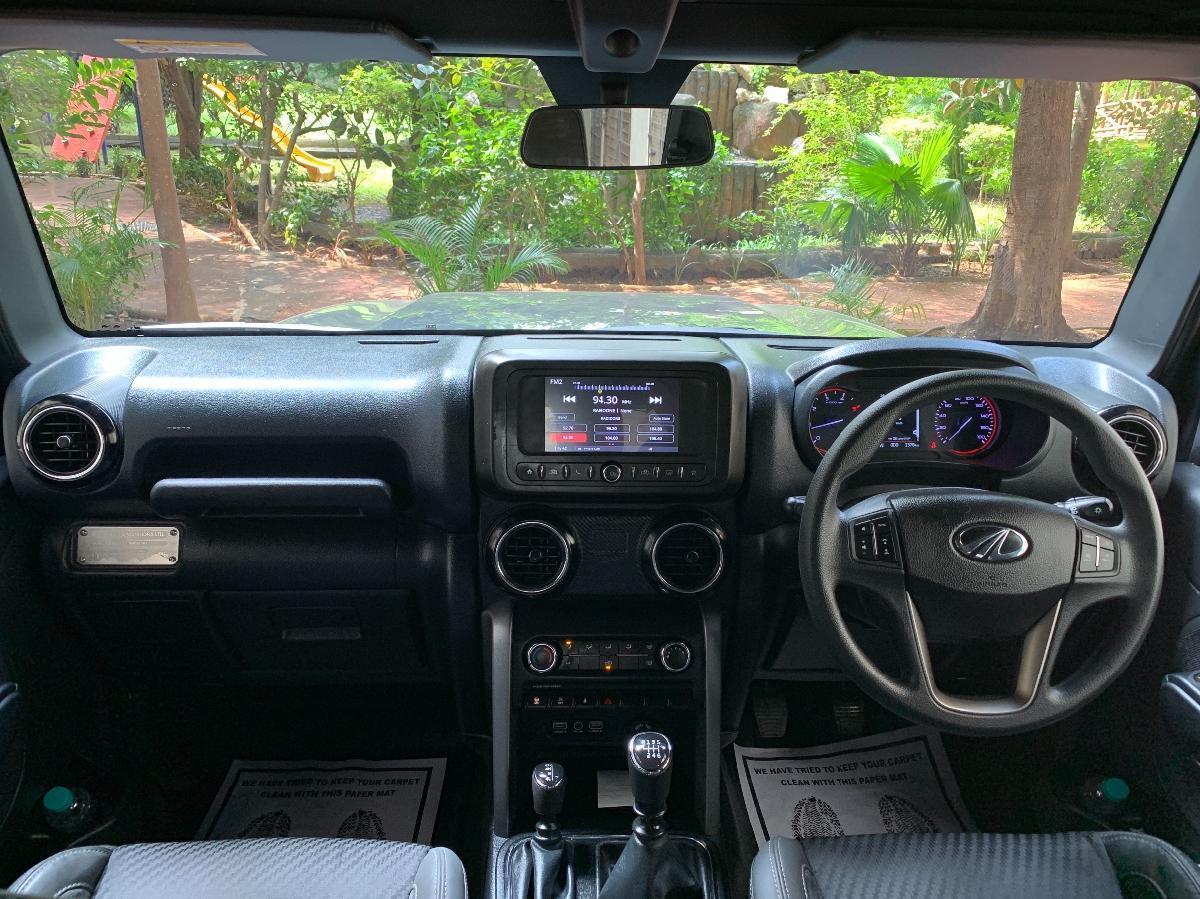 However, it must be noted that boot space isn’t much which means you either have legendary packing skills or a very high credit card limit. 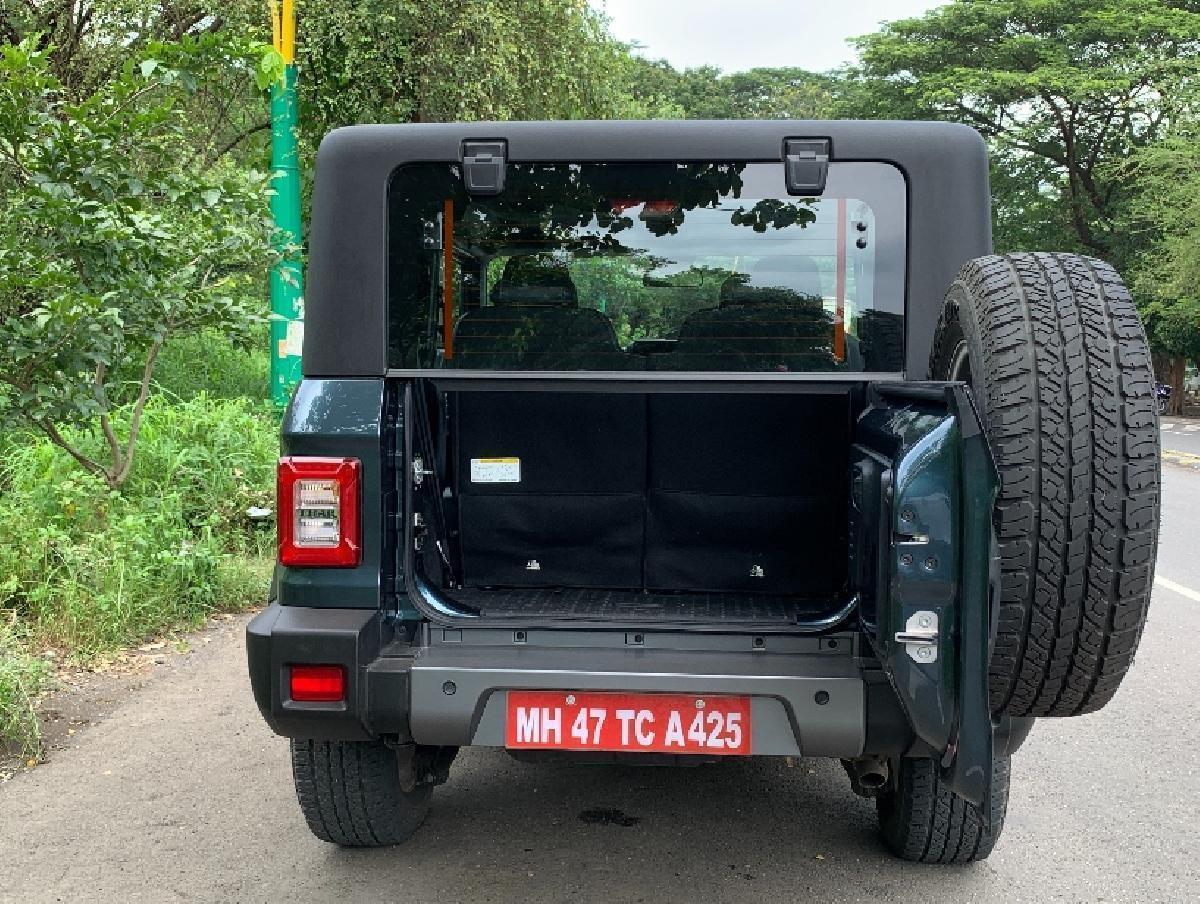 Again, I found myself on an open road and as I stepped on it, I realized that the Thar doesn’t feel noisy and there is very little wind and tyre noise that filters into the cabin. Maybe it had to do with the fact that I was driving the hard top. Of course, the diesel engine clatter was audible but then that’s any diesel engine for you. The gear shift may take some getting used to, especially while downshifting, however, the Thar is happiest when it is slotted in the fourth and above gears. Past the 2700-2800 rpm mark, the engine sound becomes more pronounced. There is also some amount of body roll but then in an SUV this size, that’s negligible and frankly in the Thar, it has been well contained.

The Thar’s suspension is also remarkable. I drove it on a very bad patch of road where every car next to me was inching forward at a snail’s pace but thanks to the Thar, I managed to cross that potholed road at regular city speeds smoothly without feeling a single bump. That shows you how good the Thar’s suspension settings are. Also, to be noted is its ground clearance which stands at 226 mm and its water wading depth of 650 mm which should be able to get through most flooded areas with great ease. 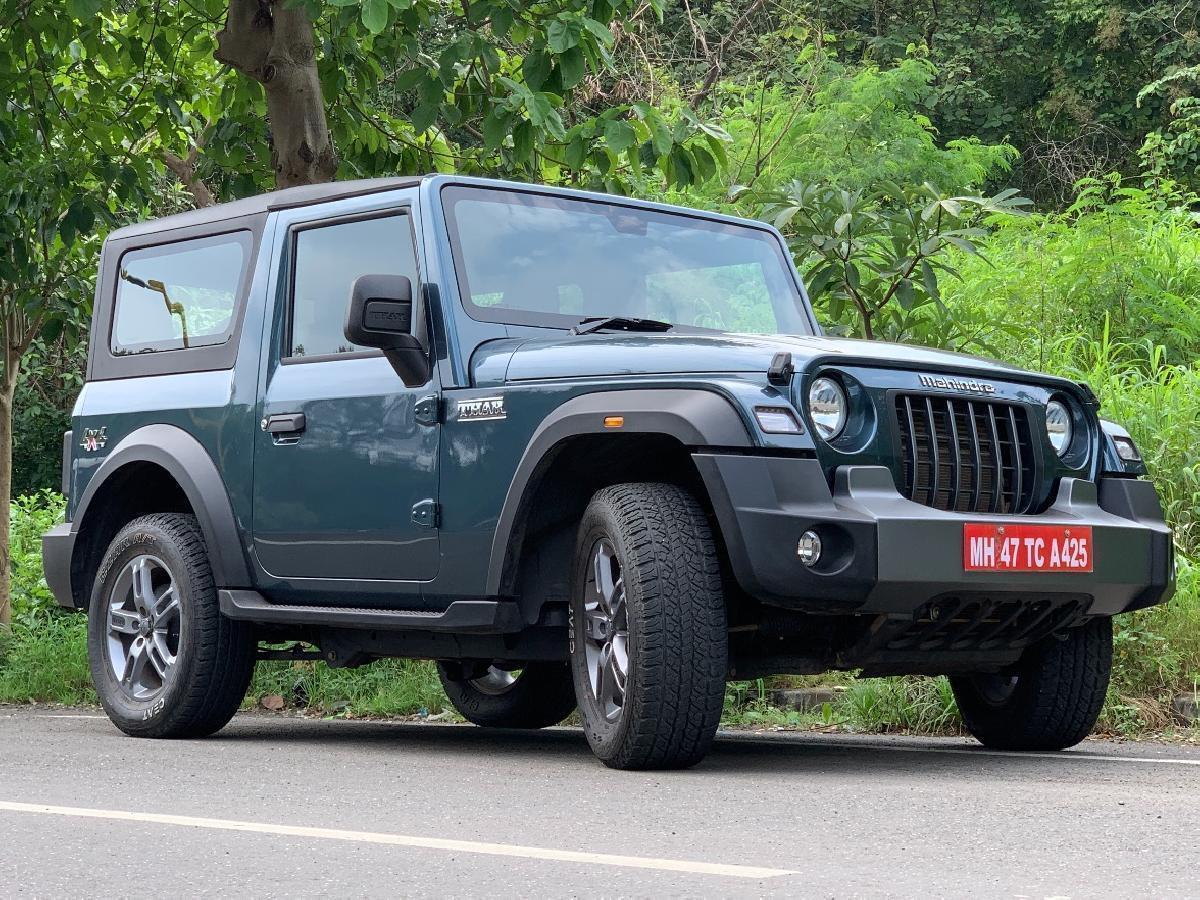 In between all of this driving from Mahindra’s Kandivili plant to Thane and back, besides the people mentioned above, a couple in an Electric Vehicle, an NRI, a biker, and two blokes who work with a security company stopped to ask me about the Thar. But that’s not all, after finishing my trip, when I was heading out of Thane, at a long signal, there was a tap on my window. It was a cop. He had hopped off from a Police Vehicle behind me, a Mahindra Bolero, to ask me about the Thar. His Boss, who was sitting inside had sent him over to get details. As I answered his question about engine capacity, and rolled up my window, I saw him get back into his Bolero and I could almost envisage his Boss making up his mind about owning the Thar very soon. I was truly staggered by the attention that the Thar received in the limited time I had taken this beast out for a spin. And why not, I found telling myself, afterall, it is a product from the Mahindra stables which is bound to find a resonance with Indians out there, if priced correctly. Of course, certainly not everybody staring at the Thar may go out and buy one, but the Thar has definitely managed to stir something inside most of them who laid eyes on it and maybe even kindled a desire to own it someday, and that emotion itself is a very strong one.

As for me, if it were up to me, I would have emptied its 57-Liter fuel tank by taking the Thar on a really long drive, but suffice to say that I returned home with my hands still red from gripping it’s fantastic Rack and Pinion hydraulic steering, for hours, which gave good feedback from the road, and if that’s not an indication of the mammoth fun I've had, I don’t really know what is.