Spacious, practical and comfortable with commendable off roading capabilities, the Mercedes-Benz GLC is both, brain and brawn

Ever since Mercedes-Benz entered India, 25 years ago, we have seen the luxury car manufacturer give us some of the finest set of wheels. The GLC, a much-loved SUV from their stables, is no different. Now, Mercedes-Benz has ensured that it has gotten even better; and with the newly introduced MBUX (Mercedes-Benz User Experience), it makes for a rather compelling proposition.

While other rivals such as the BMW X3, Audi Q5 and Volvo XC60 which compete with the Mercedes-Benz GLC also have striking designs and even though the new GLC doesn’t look radically different from its predecessor, the new nip and tuck job, that it has recently received hardly goes unnoticed. Take the twin-slat front grille, for instance, which really stands out on the SUV giving it a bigger and bolder look. The bumper also gets a design tweak, making the SUV look slightly elevated and thus different from the outgoing model. Projector headlamps have made way for beautiful slim headlamps that are now LED DRLs and the tail lamps are gorgeous LED ones too that truly elevate the SUV’s design, adding more panache to its looks. Besides this, are the beautifully sculpted lines on the bonnet that give the GLC it’s muscular look. I particularly liked the way the designers at Mercedes-Benz have used chrome on the front fascia as well as at the rear. It may seem like a lot of chrome to many but not for a minute does it look gaudy or garish, infact, it only does the job of adding a more premium feel to the GLC because of the way it blends with brushed aluminum used alongside it. Even the tail pipe trim in chrome that has been so aesthetically integrated into the bumper lends a great finishing touch to the SUV. No changes to the side profile of the SUV are evident but the running board does look striking in the aluminum finish and makes ingress and egress a tad bit simpler for the occupants.

Inside, the silk beige interiors look really inviting. After a long hard day at work, gliding into the driver’s seat with such serene interiors to drive back home is something I realized, I could quickly get used to. The SUV gets 64 colours of ambient lighting, you can pick one for whatever mood you’re in. The center console gets fine open pore walnut wood with brushed aluminum and chrome touches that really adds character to the SUV’s design. Everything is so neatly designed and there are no big and ugly buttons or knobs carried over from yesteryears, making everything inside the SUV look slick and unfussy, just like it should in a premium SUV. You also get wireless phone charging in the SUV’s stowage area which means your phone will never run out of juice. Since we’re in 2020, I was half expecting to see a digital instrument cluster but Mercedes-Benz is still going with analogue which frankly doesn’t look out of place with the SUV’s overall design. There’s also a 5.5-inch multi-function display in chrome surround that looks elegant. I also really liked the colour of the three-spoke multi-function steering wheel which was a rich shade of brown that seemed to go rather well with the GLC’s silk beige interiors. 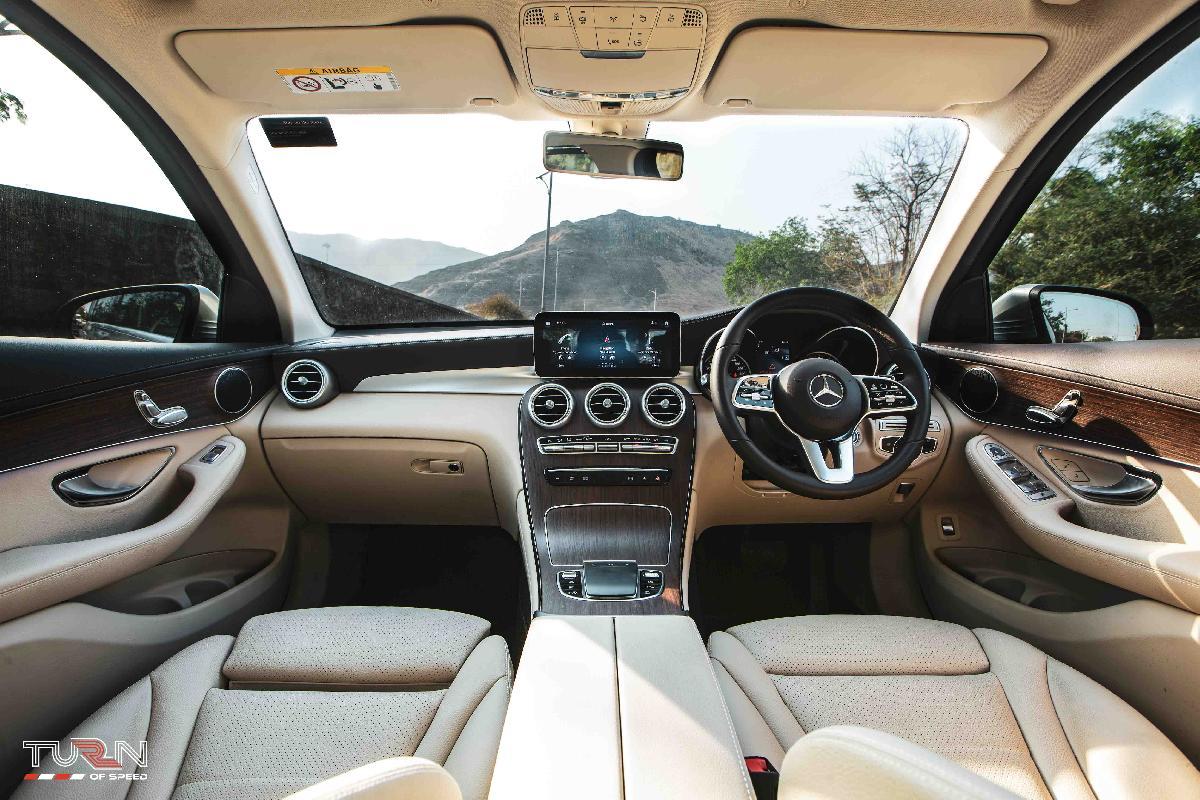 Then there is the touchpad with haptic feedback for operating the 10.25-inch high resolution display which also reacts to your touch inputs (there’s also handwriting recognition software embedded) and it can also be controlled using Touch Control buttons on the new steering wheel. 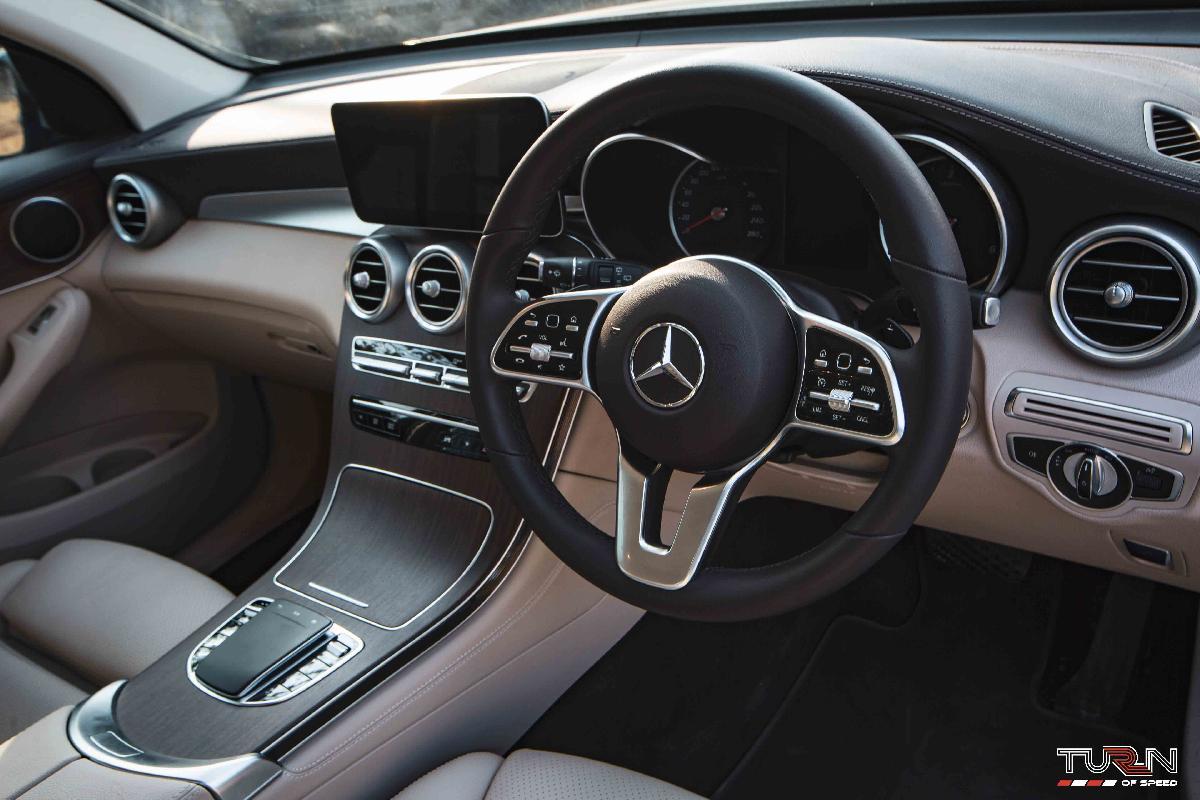 The sophisticated and intuitive MBUX touch control lets you show exactly what you want to see on the display but I felt the best way to operate the MBUX was using voice commands. Utter the magic words “Hey Mercedes” followed by the command and voila, the GLC is at your service! There's also an App that lets you do a zillion things from outside such as pre-cooling the SUV, remotely locking and unlocking the SUV, getting a status check on the tyre pressure and the general health of the SUV on your phone screen, to name a few. Oh and lest I forget, the MBUX comes with an integrated SIM that is powered by Vodafone. 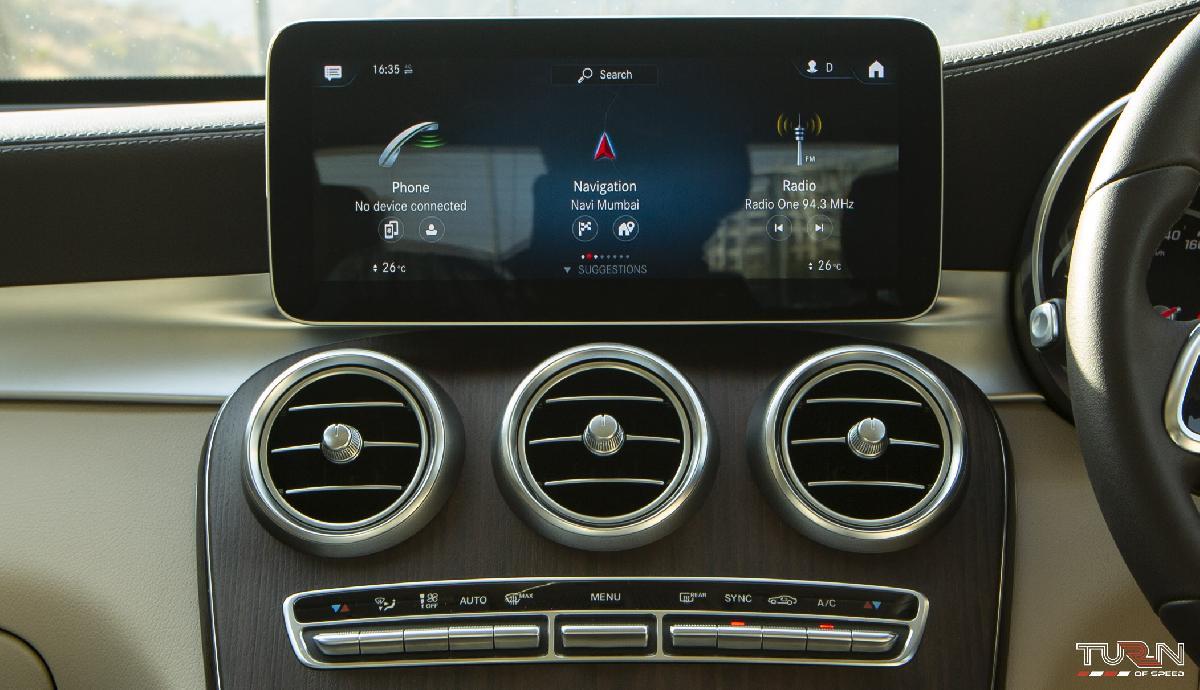 The GLC boasts sufficient space in the rear and the panoramic sunroof and light interiors give it a semblance of being even more spacious than it really is. Air vents with a rotary knob and louvers in silver chrome really make the rear also look quite stylish and the addition of two Type C USB ports in the rear shows that everything has been well thought out to ensure that the rear-seat passengers have a place to plug in their devices as well. The rear windows also get roller sunblinds that protect you from the sun while also providing sufficient levels of privacy as well. 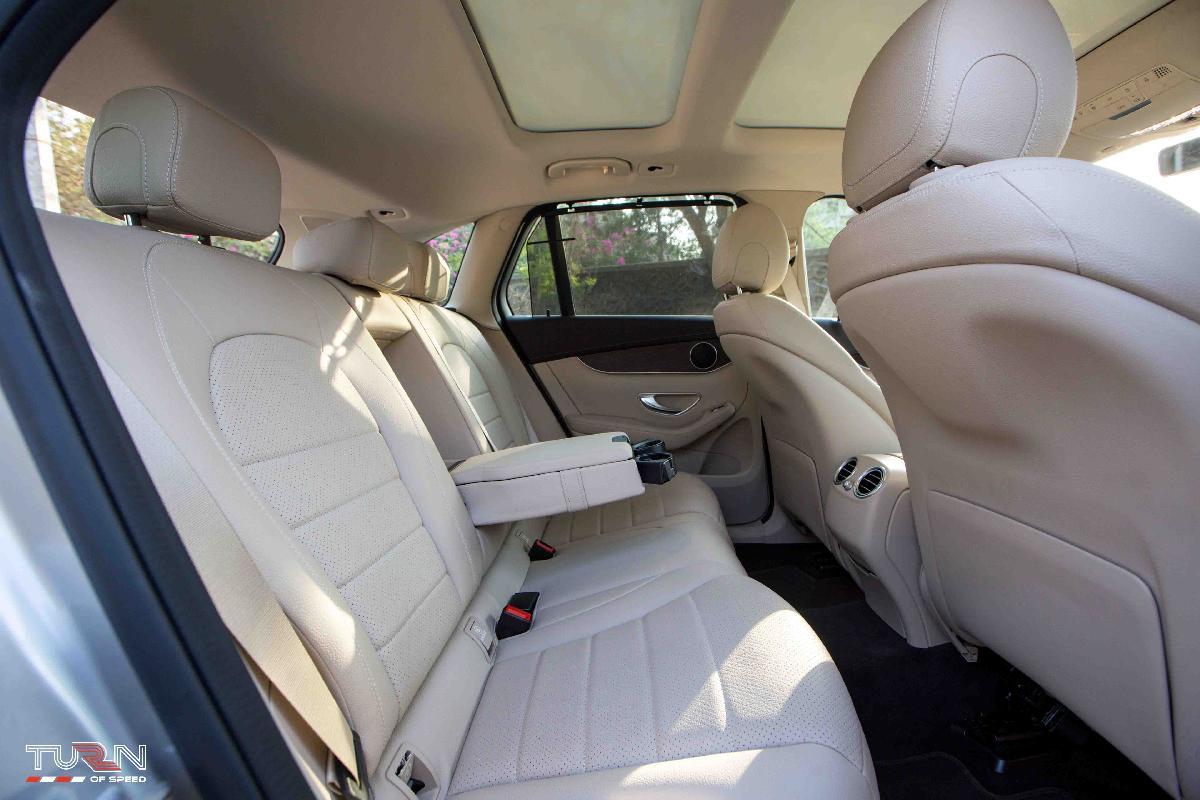 I drove the beautiful Mojave Silver GLC d220 4MATIC which gets a 4-cylinder, 2.0-Liter lightweight, compact, new generation, turbo-diesel engine (BS-VI compliant), that oozed great levels of refinement, resulting in a rather quiet driving experience. The 9G-Tronic which is basically a 9-Speed automatic gearbox worked smoothly without any glitches whatsoever and the SUV belted out 191 bhp and 400 Nm of torque which was infact available pretty much early on, as you put pedal to metal around the 3000rpm range. ‘Dynamic Select’ allowed me to drive in different modes with changed handling characteristics of the engine, the transmission, the suspension as well as the steering, thereby allowing me to get a true feel of this rugged yet elegant SUV on different terrains. Not once did I find the 2500 kg SUV difficult to maneuver or park in the city. The fact that it weighs 2500 kg could barely be felt when seated behind its wheel. The GLC, a 7.9 second SUV, is one that can be truly enjoyed at high speeds and you will find its steering weighing up as you go full throttle which is always a terrific feeling. What is remarkable is that there isn’t much body roll or that feeling of uncertainty while driving around corners as the GLC feels firmly planted on the road at all times. And why not? Afterall, let’s not forget it is a Mercedes! Even the SUV’s length of 4658 mm is hardly felt while maneuvering it, in fact, on the contrary,it feels like an appropriate size for our Indian roads and also boasts of plenty of space on the inside. 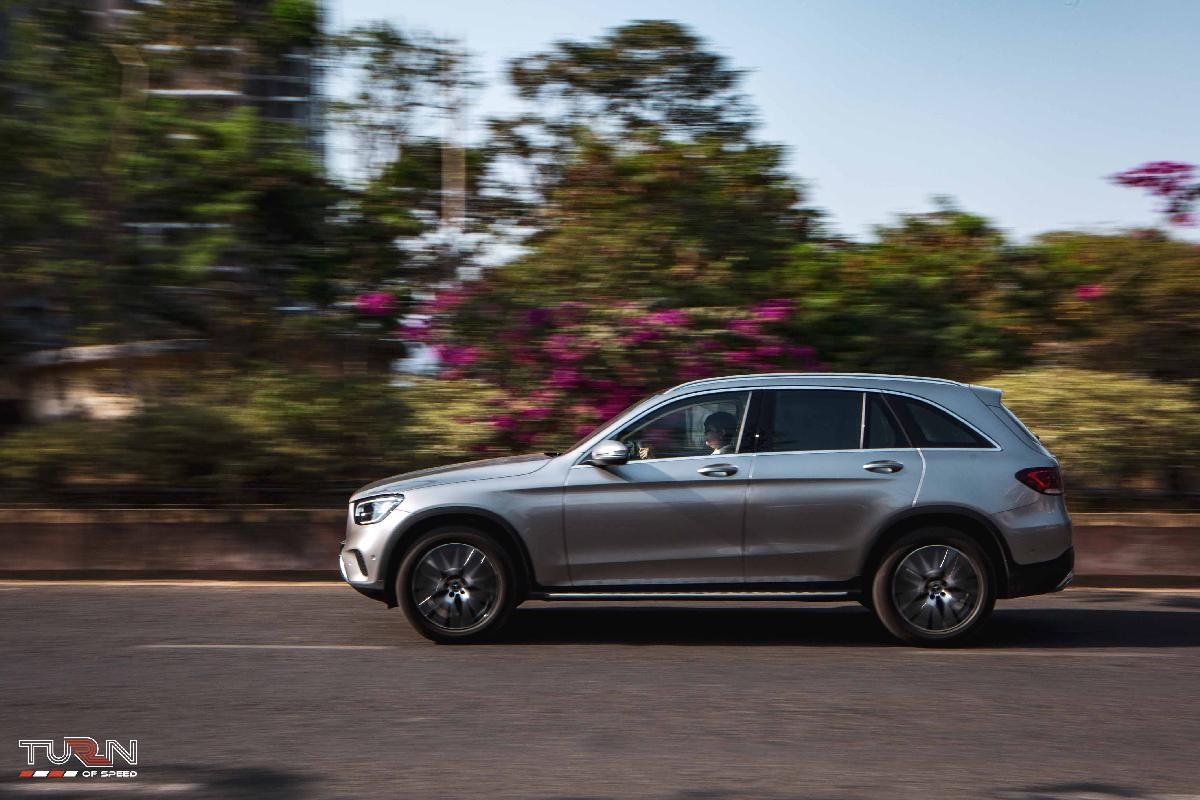 With a top speed of 215 km/h, the GLC, which comes with 19-inch light alloy wheels painted in high gloss black with a high sheen finish really gives the SUV a very posh look. There are no changes to the suspension from the outgoing model but the GLC continues to do a good job in soaking up potholes and bad surfaces on our roads. 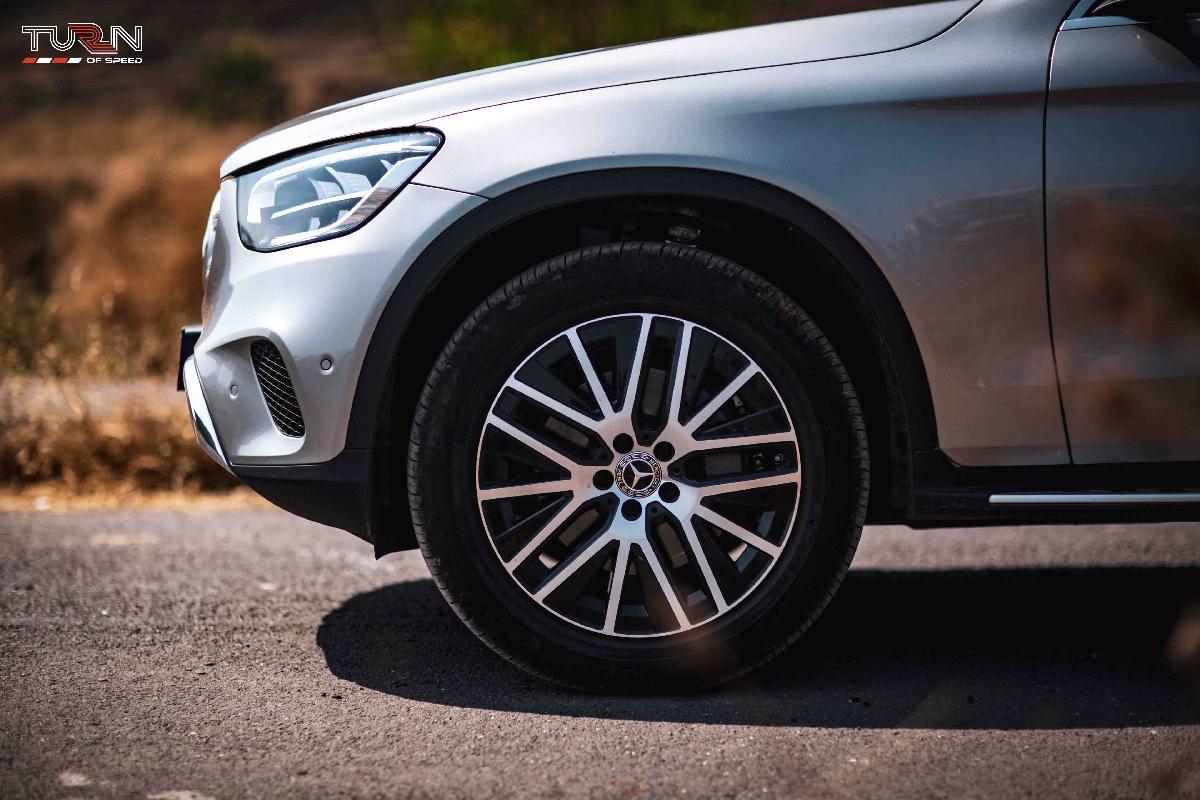 Then there is also 930 liters of boot space that the SUV boasts of which can well be extended to 1558 liters and that is hugely impressive, especially for all your luggage that you may want to carry especially on that drive to Ladakh.

Mercedes-Benz has priced the GLC competitively with the diesel starting at 57.75 Lakh, sure it is slightly more than its rivals but then again it is a Merc! If you are looking for something discreet, or something that that isn’t too flashy in a sea of SUVs, and that won’t make you stand out and announce your arrival to the world, maybe the Mercedes-Benz GLC is the SUV for you. 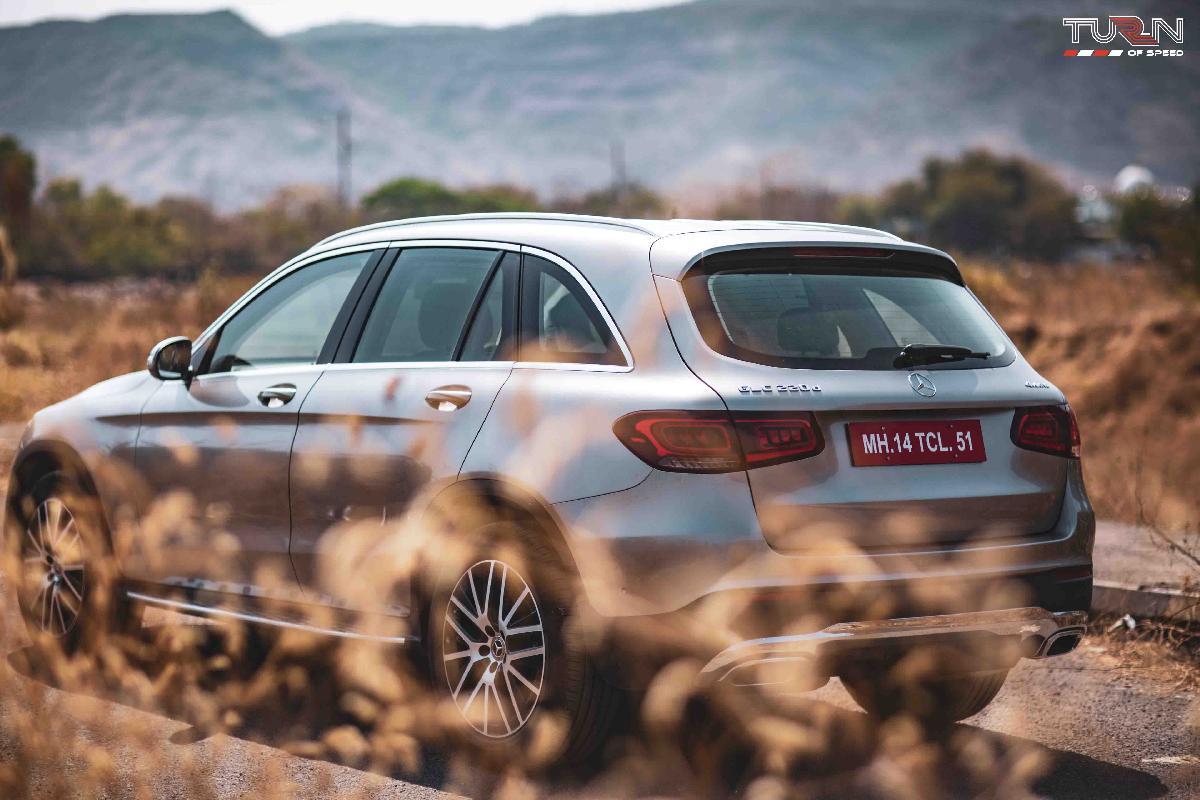 So, if you’re in the market for something that offers luxury, premium features and a vehicle that is quiet, both metaphorically and literally, this is the SUV that you should be gunning for. Not only does it drive and handle beautifully amidst crowded city streets but it is also an able performer on the highways. Not something that is going to set your pulse racing exactly but it is an SUV from Mercedes-Benz's stables that is spacious, comfortable and reliable. Most importantly, it is an SUV that will more than do the job of driving you from point A to point B in an understated manner, albeit in refined luxury and splendid style, while keeping you safe on our unpredictable roads.