At the Auto Expo – The Motor Show 2023, several two-wheeler brands showcased their range of products, however, the big names such as Hero MotoCorp, Honda, Suzuki, Royal Enfield, Bajaj and Kawasaki gave the event a miss. A handful of start-ups participated and displayed their line-up. Here are a few scooters and motorcycles that set our pulse racing…

Greaves Cotton kickstarted Auto Expo – The Motor Show 2023 with the unveiling of the all-electric Ampere Primus scooter. Housing a 3kWh battery pack, it is equipped with a 4kW electric motor with a range of 100 km. The top speed of the e-scooter is pegged at 77 kmph. Ampere Primus gets three riding modes in the form of Eco, City and Power. It also features a ‘Reverse’ mode as standard feature. The pricing has not been revealed as of now but expect this one to be launched in the coming days in the Indian market.

Greaves Electric Mobility showcased a total of six products at Auto Expo – The Motor Show 2023, and NXG and NXU electric scooter concepts were among them. The NXG Concept, is a premium offering with LED lights and an all-digital instrument cluster. The NXU Concept, on the other hand, is meant for B2B purposes with features such as saddle bags, a round headlamp and dual-purpose tyres. However, the company believes that it can also be purchased as a family scooter. The company has not yet divulged the battery specs, range or the charging time. Neither has it dropped any hints about the launch date. Hopefully, it will arrive soon in the Indian market.

TVS Motor Company presented the iQube ST during Auto Expo – The Motor Show 2023 and it is expected to go on sale very soon in India. The scooter has been made more premium by including a bunch of new features in the form of TPMS (Tyre Pressure Monitoring System) and Voice Assist. Mechanically, it remains unchanged and draws power from the same 4.56kWh battery pack along with a 3kW motor. TVS iQube ST delivers a range of 145 km on a single charge while clocking a top speed of 82 kmph. It takes nearly four hours to charge the battery to 80 percent from nought with the help of a regular charger. The prices are yet to be revealed.

Keeway has introduced its second offering in the Indian market in the form of SR250 at Auto Expo – The Motor Show 2023. Priced at INR 1.49 lakh (ex-showroom), it is a retro-styled motorcycle which will rival TVS Ronin, Royal Enfield Hunter 350, and Kawasaki W175 in India. Keeway SR250 is powered by a 223cc single-cylinder petrol engine which develops maximum power output of 16 bhp and peak torque of 16 Nm. Bookings for the motorcycle have started at an initial payment of INR 2,000 and deliveries, according to the company, will start from Feb 2023. 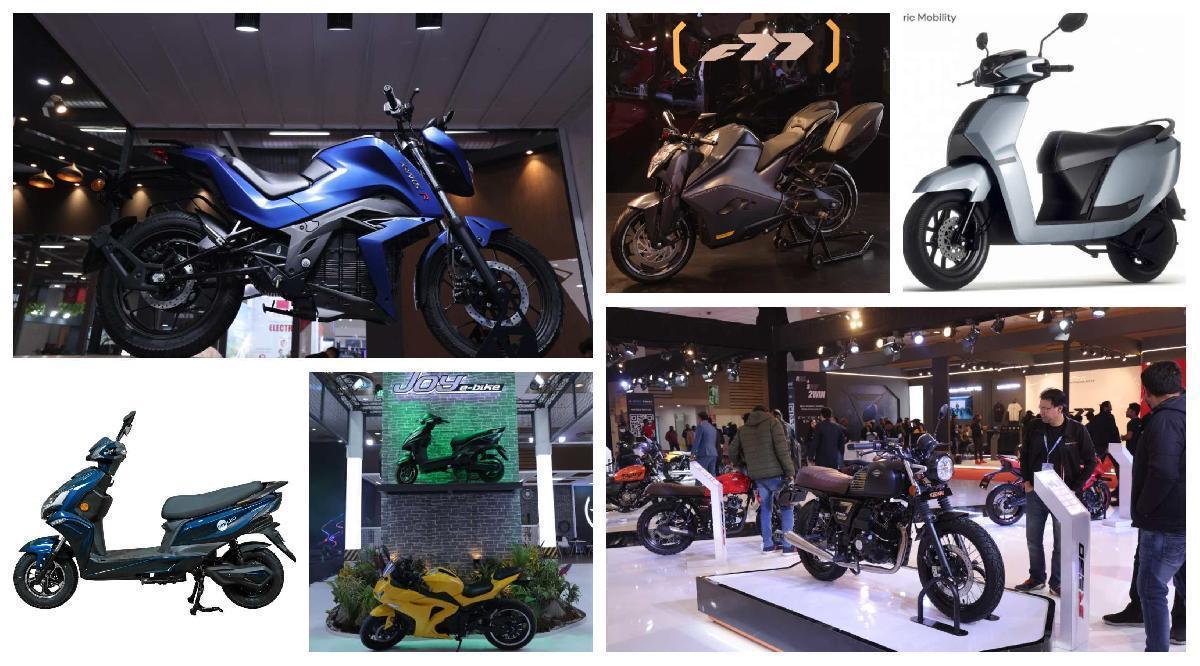 Benelli Leoncino 800 premiered at Auto Expo – The Motor Show 2023, in India. Already sold in several global markets, it comes packed with a 754cc liquid-cooled twin-cylinder petrol engine which generates top power of 75 bhp and highest torque of 64 Nm. The engine is linked to a 6-speed gearbox. Based on a Trellis frame, the Leoncino 800 is the elder sibling of the Leoncino 500 which is on sale in the Indian market. It is not confirmed yet whether the Leoncino 800 will be launched in the country or not. However, if launched, it will be priced above the Leoncino 500.

Gujarat-based Matter Motors presented a new variant of its electric motorcycle with a larger battery pack at Auto Expo – The Motor Show 2023. The new variant gets a 6kWh battery as compared to the 5kWh of the standard range. The battery pack works in sync with a 10.5kW electric motor which returns a torque value of 520 Nm, claims the company. The motorcycle is offered with a 4-speed manual gearbox and its range, the company claims is between 150-200 km on a single charge. The price hasn’t been announced yet, but we believe that it should be out next month. The new Matter electric motorcycle will rival Revolt RV400 and Oben Rorr in the Indian market.

Tork Motors, the Pune-based EV start-up, has taken the wraps off the new Kratos X at Auto Expo – The Motor Show 2023. Though based on the existing Kratos R, it comes with a myriad of new features. Tork Kratos X is torquier and is also compatible with fast charging. The company refrained from revealing the details about the battery pack, range and charging time. Tork Kratos X bookings will start from Q2, 2023, while test rides are expected to begin from March-April, 2023, with first deliveries promised around June 2023. Expect price announcement to happen closer to the time of deliveries.

WardWizard unveiled the Mihos, a high-speed electric scooter at Auto Expo – The Motor Show 2023. It has been introduced with a 74V40Ah Li-ion based battery with energy content of 2.5 kWh. WardWizard Mihos electric scooter has been priced at INR 1.49 lakh (ex-showroom). It is equipped with a 1500W motor which delivers instantaneous torque of 95 Nm. The Mihos has a range of 100 km on a single charge and it takes around four hours for a full charge. The electric scooter can do a 0-40 kmph sprint in under 7 seconds before topping out at 70 kmph. WardWizard Mihos bookings begin from January 12, 2023 at dealerships in India.

HOP Electric already has a significant presence in the electric two-wheeler space and taking a step ahead in this direction, it launched the high-speed variant of its best-seller Leo. The new e-scooter delivers a range of 120 km on a single charge and the best part is that its pricing is below INR 1 lakh. It will be available at the company showrooms in the coming days. Powered by a 72 V voltage architecture along with eflow technology, it generates maximum power of 3 bhp and peak torque of 90 Nm. The electric motor is supported by an advanced lithium-ion battery pack of 2.1 kWh with IP 67/65 rating, making it waterproof and dustproof. The brand will provide an 850 W smart charger for buyers. The charging time from 0-80 percent in merely 2.5 hours. HOP Leo comes with four ride modes – Eco, Power, Sport and Reverse.

Being touted as the world's first AutoBalancing electric scooters, Liger X and Liger X+ have been unveiled at Auto Expo – The Motor Show 2023. Both get a liquid-cooled Lithium-ion battery pack. While the Liger X gets a detachable battery pack which charges to an optimum under 3 hours, the Liger X+ is rolled out with a non-detachable battery which can be charged upto an optimum under 4.5 hours. The battery capacity however, is not yet known. The fast-charging option can be availed on both scooters by coughing up an additional amount. Liger X will deliver a range of 60 km and the Liger X+ will have an enhanced range of 100 km. Bookings for the Liger duo commence in mid 2023 with deliveries being promised by the end of the year.