"The proof of the pudding is in the driving": Ashish Gupta

Volkswagen India just introduced the Virtus, one of the most awaited sedans in India today. We caught up with Ashish Gupta, Brand Director, Volkswagen India, and he had some rather interesting things to say about the past, the present and the future of Volkswagen cars. Read on…

TOS: What have the reactions to your brand-new sedan, the Virtus, been like so far?

AG: Reactions are positive. The car is a brilliant package in every sense. I would like to believe that it is the best car in the segment. In fact, I have travelled across the country and the reactions we’ve been getting so far are overwhelming. The car is available for previews to customers at our dealerships. The customers have just loved the car. They have loved the proportions, the designs, the agelessness and the solidity of the car. People who have taken a test drive just love the car.

TOS: Why do you feel buyers will choose the Volkswagen Virtus over its rivals?

AG: I believe that the proof of the pudding is in the driving. After the customers get behind the wheel of the Virtus, I don’t think they can choose anything else. In fact, that’s true for all our cars. Almost 20% of our sales for Taigun, for example, has come from existing VW owners. Somebody who has owned a VW, doesn’t normally go for anything else. That’s the kind of confidence our cars inspire in customers. That is something that will continue with the Virtus as well. We have a huge customer base with over 400,000 Polo and Vento customers, and now they have a chance to upgrade with the brand. 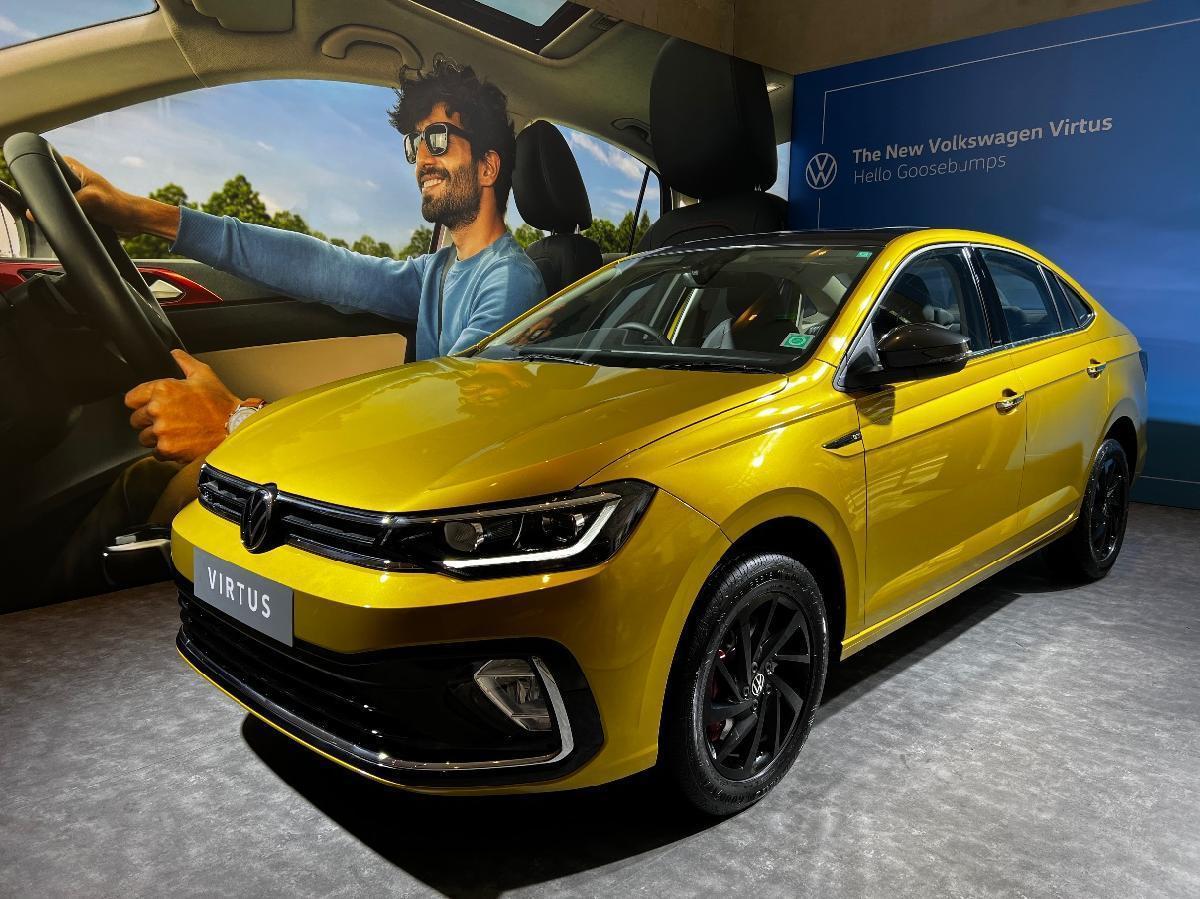 TOS: What are the figures that you’re looking at?

TOS: You spoke about maintenance. How are you going to make such a premium car available to buyers without a “premium” maintenance plan?

AG: There has been constant feedback from customers to us over the years that are cars are costlier to maintain and with good reasons… because we had a higher import content so, the cost of import parts was higher. Sometimes, the lead times for availability of parts were higher because of exactly the same reason – many of them were imported. So, a lot of assemblies needed to be changed in our cars which were costly to replace and so all of this added to the repair bill and service cost of the customers. Definitely with the 2.0 products we’ve worked right from the design stage in making sure that we attack cost of ownership as an important customer feature and not something to be given an afterthought to. It’s a feature that customers are buying into and that’s how the project was designed… around making sure that the cost of ownership is also considered as a selling point and a feature of the car. That included higher localization, more child parts availability, we actually looked at our parts pricing once again tried to rationalize that pricing, we introduced four years warranty, four years road side assistance. We introduced these brilliant service value packs where you can have peace of mind for four years extendable up to seven years so all of these measures put together, it is not just one, but a combination of a lot of things with which we have come to this good figure.

TOS: What are your favourite bits on the Virtus?

AG: I love the rear design of the car. That’s my absolute favourite. Everytime I look at it, it reminds me of the Jetta and I absolutely loved the Jetta. The car has the proportions of a Jetta. In fact, if it was left to me… if Gobal had not interfered, I would have named it the Jetta. (Laughs).

TOS: Now that the Virtus is here, what can we look forward to next?

AG: We have a very young portfolio right now. The Taigun is just 6-8 months old, we just launched the Tiguan in January and the Virtus has launched today, so, we have a product portfolio with an average age of less than three months now, so definitely, the focus going forward in the next two-three years is going to be these three products. We have to make these three products successful to justify the 1 billion Euros that have been invested into the market. So, for the next three years, I would say these three products will form the core of our volumes. But at the same time, you have to continuously think about expanding your portfolio and also think about the next transformation that is coming into the market. So, parallel tracks are already on. I’m trying to get some performance-oriented models of our global bestsellers like the Golf GTI, the Polo GTI, hopefully, and the Touareg, into the country, in limited volumes because there are so many fans of these cars, so, I see a lot of potential.

TOS: With the Polo no longer being available there is a void…

TOS: You spoke about transformation, going forward… what is Volkswagen India planning in terms of EVs?

AG: It’s a parallel track. If you ask any manufacturer, nobody can say that I’m going to do this tomorrow or that this is my plan. Everybody is trying to find their path in terms of logical steps for electrification in India which has to happen anyways. Electrification is something that I see as a journey for the next four-five years which ends in mass electrification towards the second half of this decade. When I say second half of this decade, I mean 2025, 2026, 2027 is when mass electrification can pick up in India. The supply chain is not ready, the eco system is not ready… it takes time to develop all that. But from here to the end point there are a couple of steps that we will try to do. One is to get from our global portfolio… and we are lucky that we have a wide global portfolio of cars… some cars from Electric portfolio globally in limited volumes to test out the eco system, to give a taste to the market of what our electrical capabilities are, move onwards to local assembly and then eventually to full localized products to maybe the second half.

What do you think of Royal Enfield's Hunter 350?