Hop Electric Mobility’s motorcycles – OXO and OXO X join the EV league. We speak with their team to see what went into designing and building these motorcycles as they look at the road ahead.

Hop Electric Mobility’s motorcycle, OXO, has arrived and is aimed at both the urban as well as the rural commuters who are aspirational and desirous of switching to a new technology. We spoke with Hop Electric Mobility’s young and dynamic team to learn all about all the time and effort that has gone into designing and building their motorcycle through their 75-week journey and also learnt about their future plans. Hop on to know more…

According to Taran Singh Salaria, Lead Designer, Hop Electric Mobility, when they started work, they looked for three things: motorcycles that were made for the masses, motorcycles that had sold well, and motorcycles that were trustworthy machines. They also knew that the youngsters wanted something fresh to take to college and so the question that arose was how to compete with the existing products.

And so, the Hop Electric Mobility’s team rolled up their sleeves and got down to work. “The design happened alongside with the tech,” says Salaria who understands the nuances of design as well as customer expectations. Sometimes the chassis needed to be strengthened according to certain stress points. At other times it was a question of designing an ergonomic fuel tank where the thigh was well supported so that the rider gets the feeling of riding a proper motorcycle. A lot of thought also went into the seat which is “softer and wider with more continued area on the top of the tank for more support to the rider” and a lot of attention was also paid to the “quality and the grade of the foam,” he says. Then, there was also a big focus on the motor and the battery – “both very important for the motorcycle.” Besides, the “ground clearance (180mm) also had to be improved keeping in mind both the rural as well as the urban commuter’s needs.”  Not to mention wheels. “Thicker wheels would affect the range, efficiency and handling and though we could have given the motorcycle a fat look, it wouldn’t be practical and it would have affected the 150+ range,” says Salaria. Another important aspect that needed to be tackled was that of the pillion rider. “Very often it is a lady who is the pillion rider and so for her what we did was make the saree guard small, it still does the job, looks minimal, and doesn’t trouble the eye,” says Salaria. 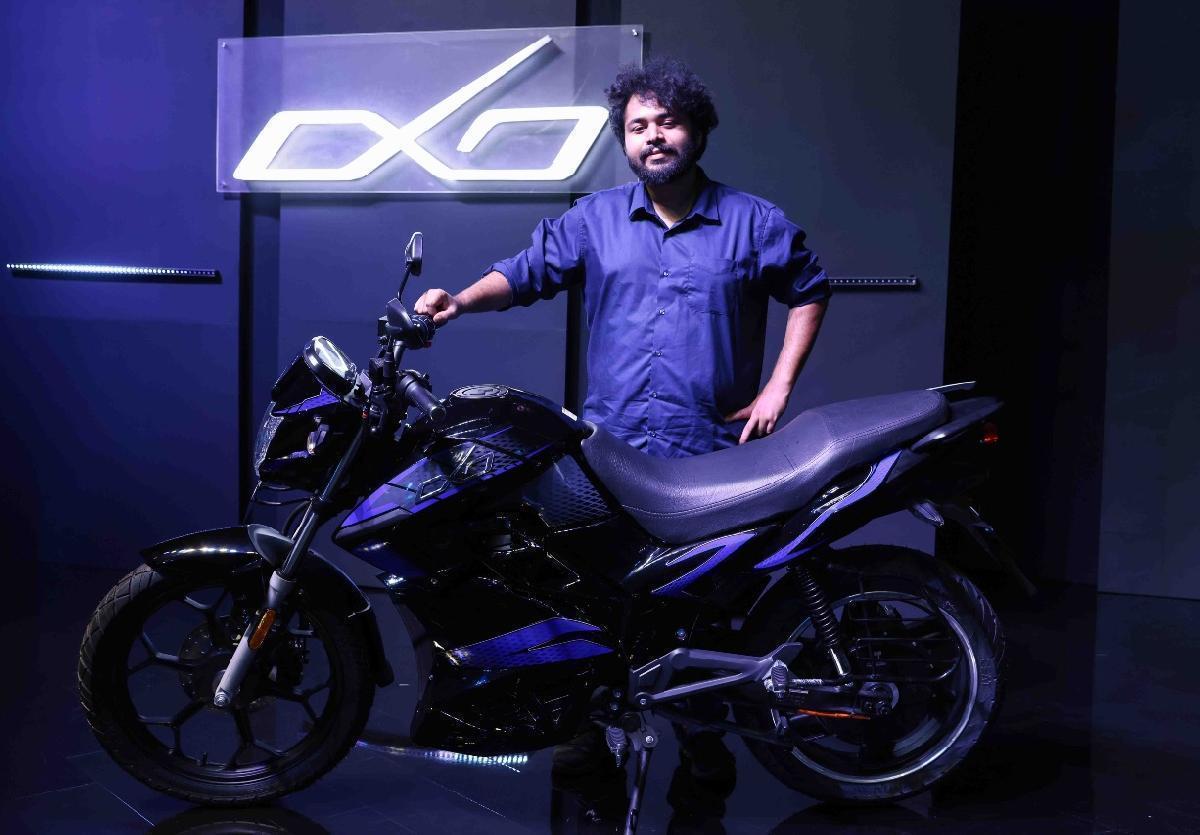 Considering EVs are new, one can really go crazy in terms of design, he says, but one has to bear in mind that not everyone may warm up to radical designs immediately, and so it is important to take things slow.” But they ensured that despite digital files, they also had clay models to get an even more clear idea of how things would actually look in the real world. The motorcycle got not just vibrant colours for a more premium look but also other favourite colours such as an all-black, matte black and matte grey, amongst others. “Eventually, we made 50 prototypes and sent them to dealerships across India and with the real time feedback that we got, we went about improving the design, the functionality, the ground clearance and other such aspects of the motorcycle,” says Salaria.

“Now, at almost the same price point of an ICE motorcycle, we are providing a motorcycle with dashing looks and a dynamic design, built with a completely modern approach, along with unbeatable tech. You can literally operate it with your cell phone, and it also comes with parental control, geo-fencing… the works. Besides extensive testing has also been carried out on it for over 1 Lakh kms and every single day our riders have been riding two bikes for 400 kms per day for the last 75 weeks,” says Salaria.

Rahul Devkar, Vehicle Integration Engineer, Hop Electric Mobility, who joined the company when the OXO project was just getting started is in charge of the electric and electronic integration in the motorcycle which includes the display, the VCU (Vehicle Control Unit), the motor controller, the motor, throttle response, switch kits, battery and VMS (BMS). His job is to integrate all these functions into one place – the VCU the smart brain of the motorcycle. 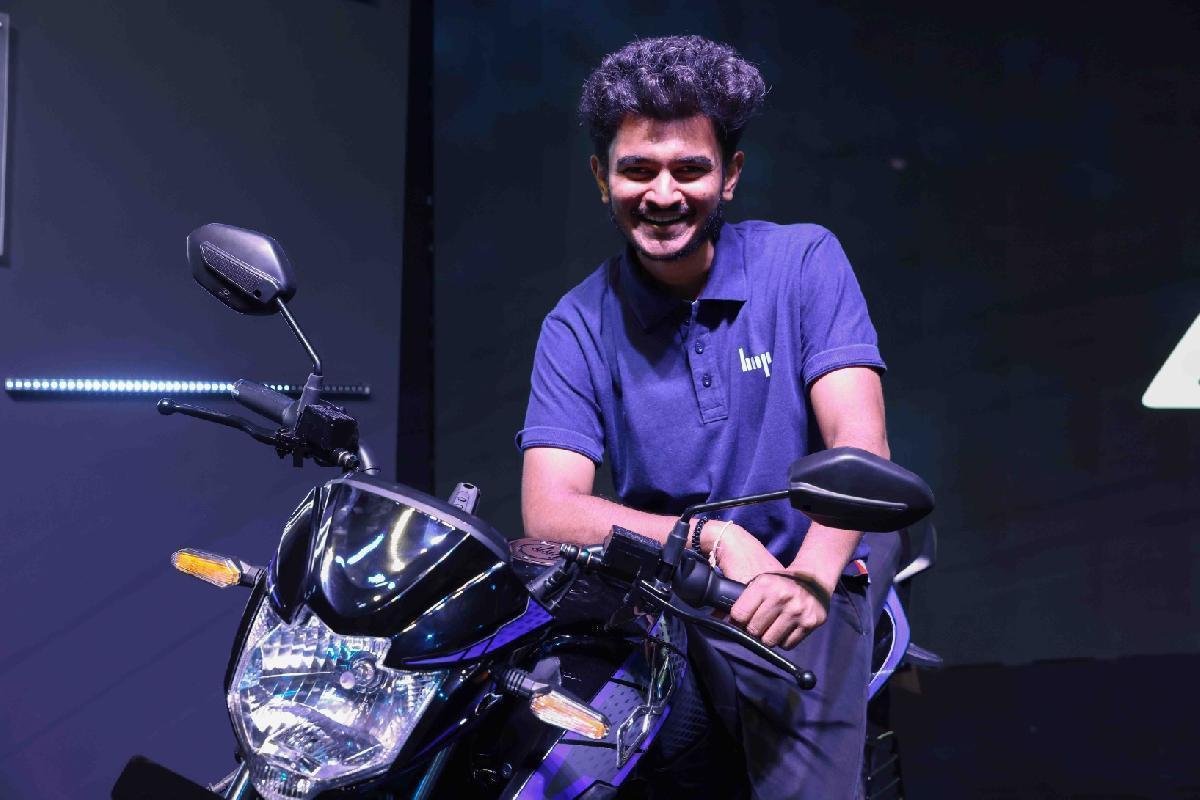 On joining, Devkar, was given the architecture and layout of a basic vehicle which was not smart, not integrated, and had multiple components that had their specific entities but were in fact, not integrated. And so, with his Mechatronics engineering background, slowly, over a period of time, he was able to add features and functionalities and make the motorcycle smarter. “When we started the project there were multiple motors - PSMS motor, induction motors, BLDC motor and we figured out the best efficiency according to the energy, torque, speed and rpm. We debated between the PSMS motor and the BLDC motor and we finally concluded that we would use the 3 phase BLDC motor,” he says.

“OXO is a basic motorcycle and OXO X is the completely smart motorcycle where the consumer gets all the data of the vehicle on the tip of his/her finger tips. Besides, the motorcycle also gets smart features both on the outside as well as on the inside. This is where we stand right now,” he says proudly.

Ketan Mehta, Chief Executive Officer, Hop Electric Mobility, says that they were very clear from the start that they wanted to build a motorcycle instead of a scooter. “In India, 70% of the two-wheelers are motorcycles and if you can’t shift them from ICE to EV, then I don’t think you make a serious impact because India rides on motorcycles. So that was one reason – to make that impact felt. Also, consumer feedback said that people needed motorcycles. That’s how we got down to doing this,” says Mehta.

About charging, Mehta says “We are saying – how much do you ride in a day? The problem faced today is actually stopping and charging and also the when and where of charging. But what we’re giving is 150 km range on Eco mode. (The bike has 3 modes – Eco, City and Sports and OXO X has a Turbo mode). With 150 km range… I don’t think anybody rides more than that in a day, maybe a Zomato rider would, but other than that 95% of the consumers will not have an issue and they can charge it at home. As simple as that. We don’t want to wait for charging infra to come up to sell this. It’s a chicken and egg situation. We decided to bypass that completely,” he says.

Further, Mehta talks about their investment in Hop Electric Mobility. “Until now, Hop Electric Mobility has invested around 50 Crores, starting two and a half years ago into these two products and a couple of other things, and going forward we are also scaling up our manufacturing,” says Mehta. The stage is set for starting an EV Park. “We have a current facility which is 1.2 Lakh units a year in Jaipur, VKI (Vishwa Karma Industrial) area. The expansion is happening in Neemrana, 80 kms from Gurgaon, which will be 60 acres and for which the land acquisition is currently going on. By next financial year we plan to start construction there. The entire ecosystem of EVs will be built in to that EV park focusing only on clean technologies. So, [it will be] our investment, plus, our component suppliers will also set up their units there,” says Mehta.

Having just launched their new motorcycle, Mehta says that “one thing that we’re very particular about and from the little experience that we have in the industry is that aftersales is the most important thing and that generates new sales. So, we will be delivering these vehicles only in those cities and in those states where our service network or our service center or team is ready, and that is a conscious decision that we’ve taken because we are aware that without service there is no product,” he says.

For the riders of OXO and OXO X, Hop Electric Mobility, is also offering accessories. “We will have helmets, protective gears, and even a bag for carrying the charger,” says Mehta. However, now that they have set the ball rolling, Mehta says that there will also be new products soon. “Of course, we will have a lot of interesting products, next year itself, which will be based on our energy infrastructure. We have a swapping infrastructure technology which is in pilot right now, in Jaipur. We have five stations and 50 customers who are doing that every day. It’s one and a half years now. Once the swapping policy comes out, we will be rolling out our swapping infrastructure, swapping stations in volume by next year,” says Mehta.