Tata Motors second Electric Vehicle, the Tigor EV, is here. Is it worth the price and should you buy one? Yes and Yes.

Just like many in India have lived to tell their great grandchildren the story of how pigeons delivered letters during their days before email became de riguer, many out there, will live to tell the story of how their journey from the days of bullock carts metamorphosed into Electric Vehicles (EVs). For now, let us dive straight in to see what Tata Motors’ latest Electric Vehicle offering is all about.

After launching the Tata Nexon EV last year, Tata Motors, is back again with yet another EV. However, this time, it is in the form of a sedan – the Tigor EV. Needless to say, the idea of a new body type is a welcome change because the clutch of Electric Passenger Vehicles that we have at present are all SUVs. Think Hyundai Kona, MG ZS EV, Mercedes-Benz EQC and Jaguar I-Pace. And that is why it is always exciting to see a new product coming in and breaking the monotony.

We have always been fans of the Tata Tigor’s cutesy design and the new Tata Tigor EV elevates it even further. The Teal Blue colour which happens to be the signature colour of the Tigor EV does make it stand out and the blue touches that it gets to depict the electric highlights in the form of the hyper-style wheels, the EV mascot, the new front grille and the humanity line, amongst others, are subtle enough to distinguish your sedan as an EV while announcing your arrival into the ‘Green Brigade.’

Inside, the Tigor EV, gets dual-tone interiors with black and beige coloured hard-plastics. 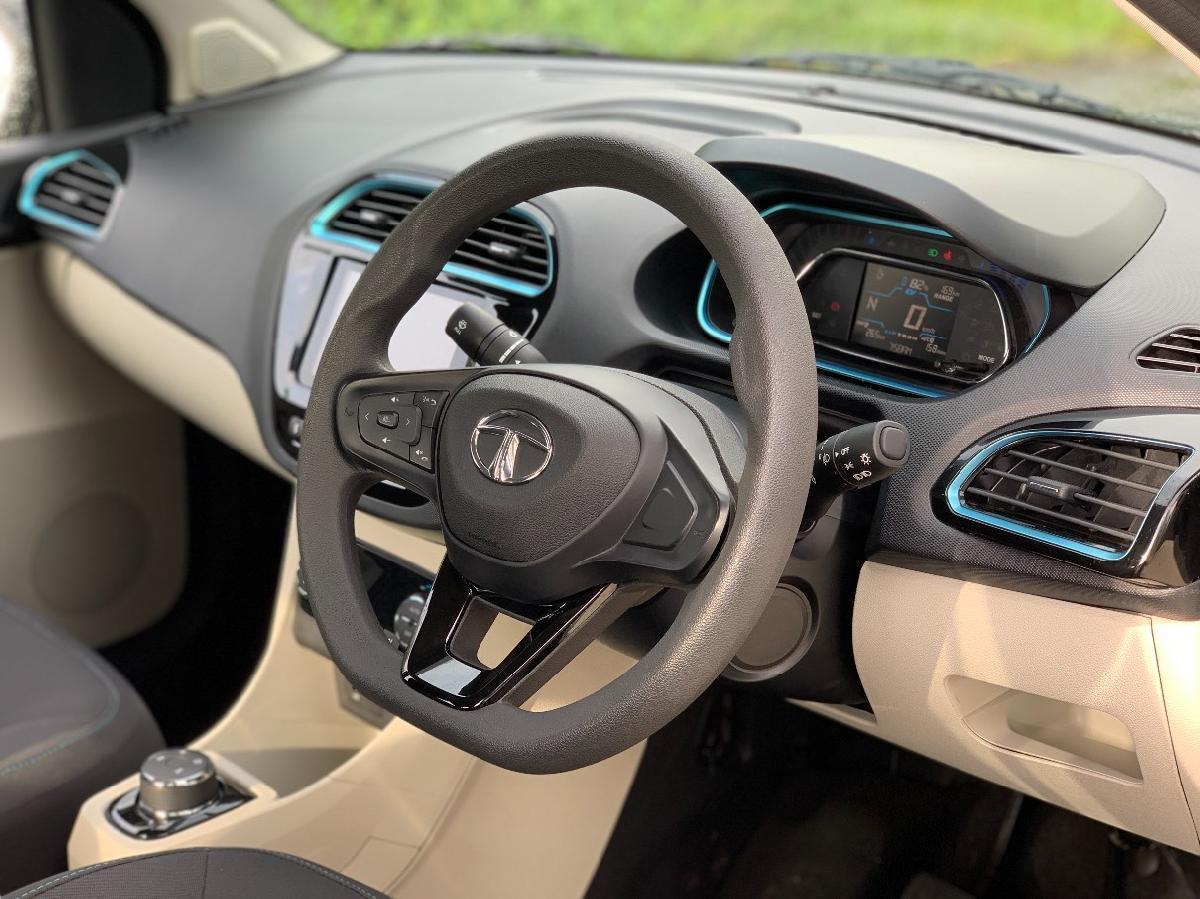 The seats offer comfortable seating, both at the front as well as at the rear and come with dark grey upholstery that flaunt the EV theme present on the sedan. 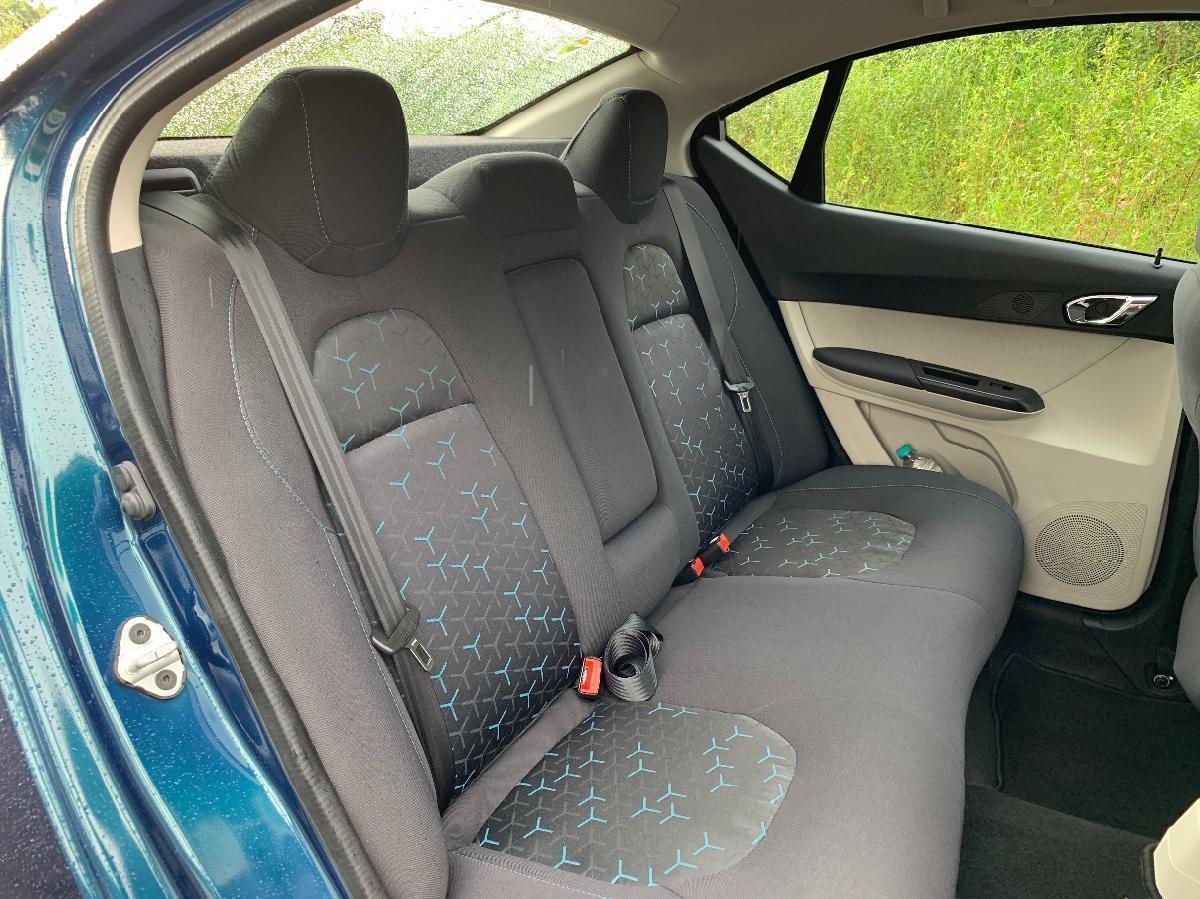 The Tigor EV gets a flat bottom steering wheel, a cooled glove box and fully automatic temperature control. The digital instrument cluster which gets a beautiful blue insert is a pretty busy one, thanks to all the information packed in for it to display from the trip meter to the battery capacity to the range to the gear selected to the clock which gives you the local time. All the information is available at a glance for the driver’s convenience. 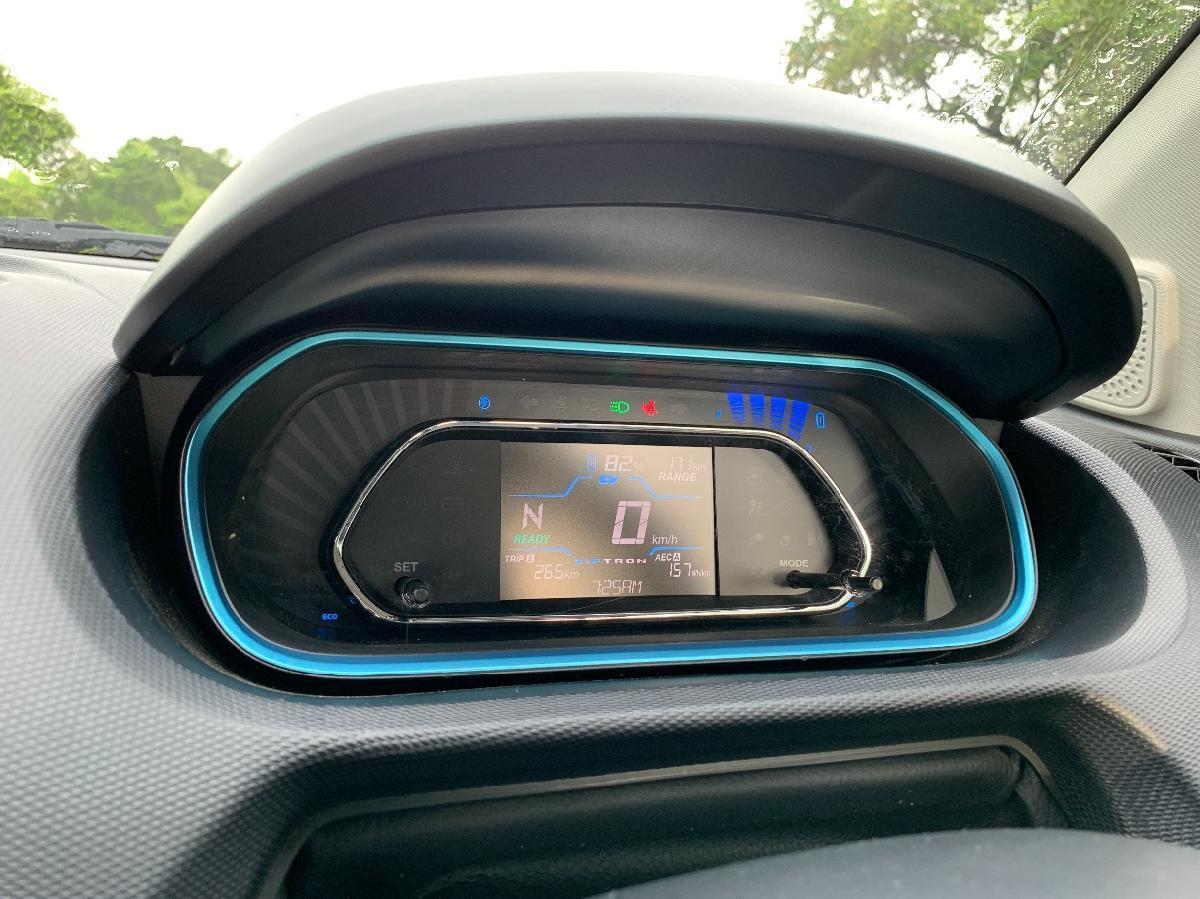 Besides, all of this, what really makes the Tigor EV magic happen are the 35 Smart connectivity features that it boasts of through Zconnect that is powered by iRA, their connected Tech platform. What this basically does is give you a plethora of handy features so that you have greater control over your Tigor EV. For instance, after downloading the Tata Motors iRA App, you can immediately know if somebody is trying to break into your EV through an Intrusion Alert that notifies you if there has been any unauthorized access or you can also be alerted if your EV has crossed a certain radius (Geo-Fencing) that you have set for it, incase, your teen decides to have his own Ferris Bueller’s Day Off, with your sedan. The App will also allow you to run Remote Diagnostics and get a detailed ‘health report’ of your EV’s battery and motor besides performing other important tasks such as navigation, finding a charging station location close by and even finding where exactly your EV is parked with the One-Click Tracker which makes locating your EV amongst many other cars in busy areas a real relief.

Besides, all of this, the Tigor EV also comes with 316 liters of boot space for you to carry your world with you, not to mention the portable charger and its thick cable that you will need for all the plugging in and charging whenever you charge it at a regular 15 Amp plug point. 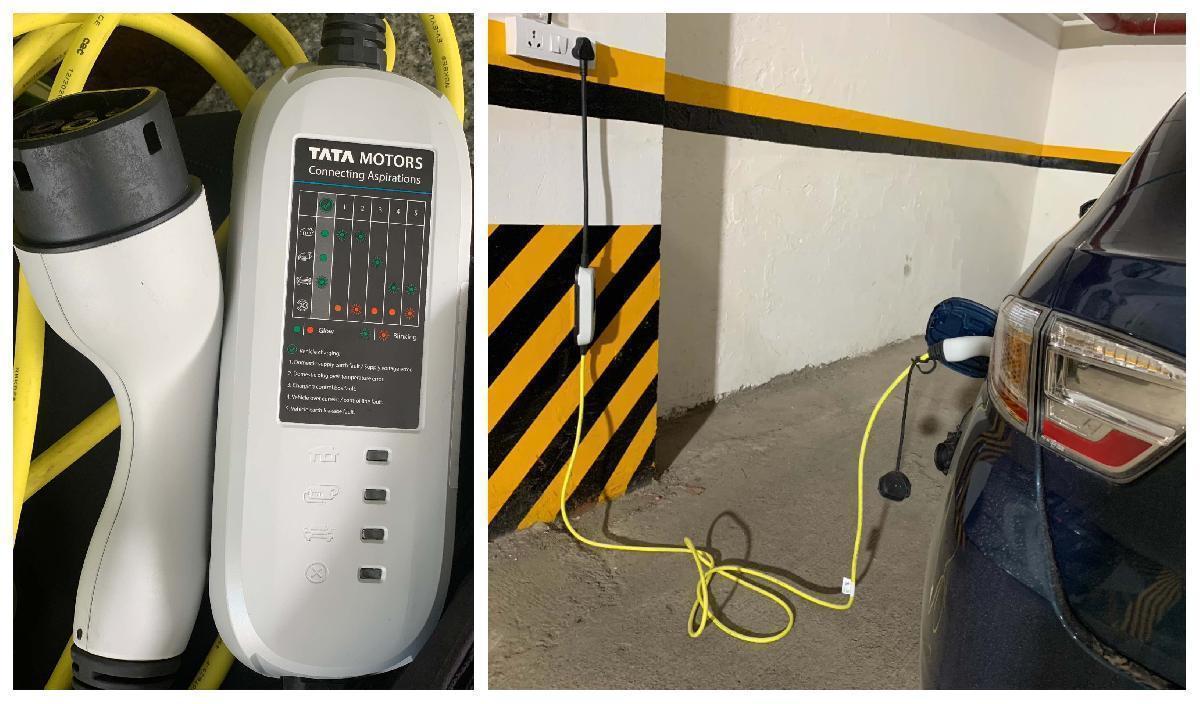 The Tigor EV, powered by what Tata Motors call ZipTron, comes with an electric motor that puts out 55kW of power and 170 Nm of torque. The sedan also comes with a 26 kWh Li-Ion battery with IP67 certification and a battery management system that makes the most of water-cooled power electronics which performs multiple tasks at various temperatures.

When we set out on our Tigor EV drive, it was raining cats and dogs which was a good thing because just a few kilometers later, after also having gone through some of the potholes, it put all our initial worries about the waterproof IP67 battery pack and the motor at ease, because truth be told, reading about it and actually driving it are two very different things and frankly, we had never driven an EV through such torrential rain before. So, with us driving at some insane speeds with the wipers running non-stop for most of our drive, barring a few minutes when the downpour did stop in between, the air-con and the radio running continuously and with us trying out the App, the Tigor EV’s battery performance seemed just about okay to us. It didn’t feel great, but just okay, and the real reason behind that was the fact that we were mostly driving the Tigor EV in ‘Sport’ mode which saw the battery levels depleting slightly faster than when we were driving it in the more timid ‘Drive’ mode. 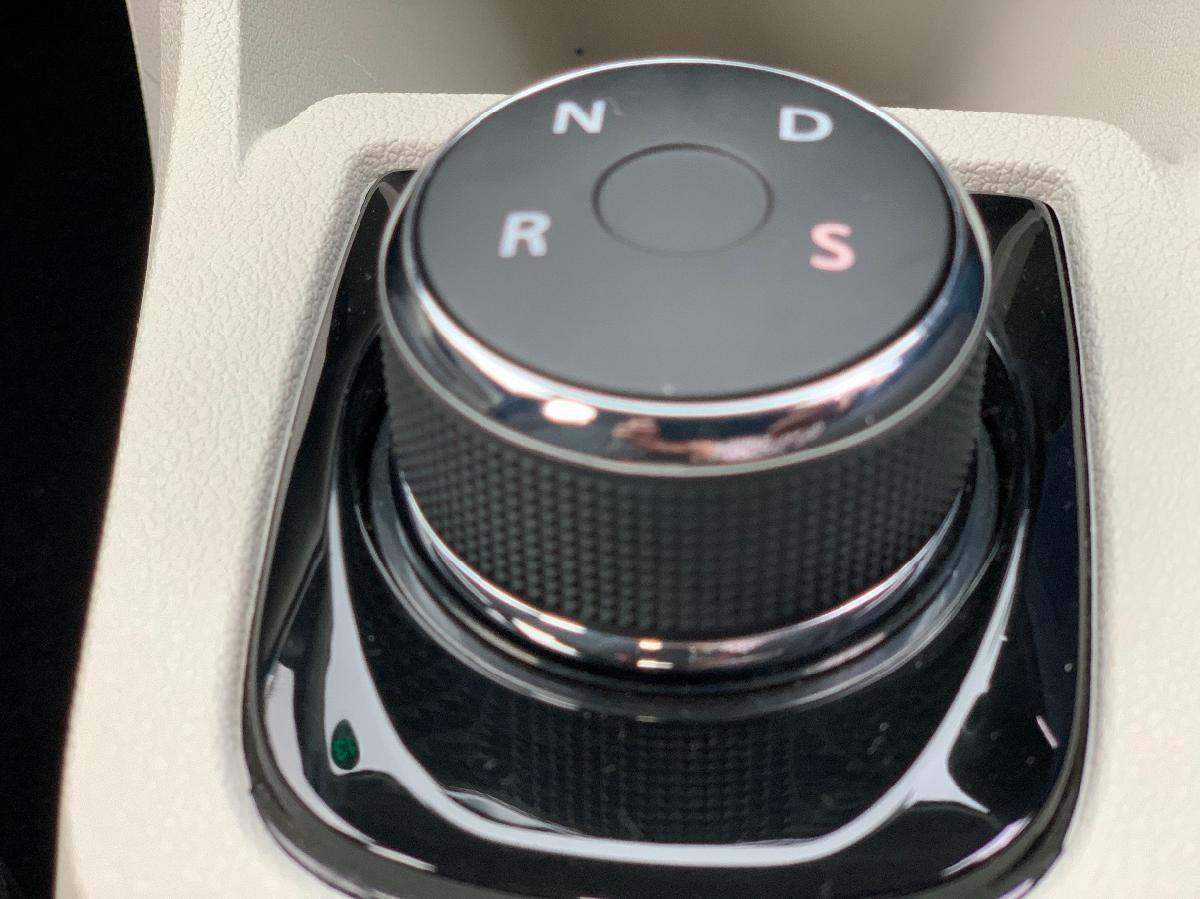 It must be mentioned that we did not drive the EV through much bumper-to-bumper traffic to experience regenerative braking at its best but yes, we did get some traffic on the way, of course, and there we did see the battery levels surge. However, like me, if you love driving with a full tank for peace of mind, (read a full charge here), you are not going to be without anxious moments when you will see the battery levels depleting rather quickly especially when you’re driving on long stretches of highway that don’t allow for much braking. The best way to get the most out of the Tigor EV, at least for now, is to drive it within the city, especially in the traffic, so that regenerative braking can use all that wasted energy to recharge the sedan’s batteries on the move. That is not to say that you cannot drive your Tigor EV to other cities. Frankly, there is nothing to stop you, except that for now, you will need to undertake such trips with some careful planning vis-à-vis where your next charging point is going to be and how much that charge is going to allow you to drive before you stop on the next charging station while considering other unexpected surprises/delays that may just randomly pop up during your travels. However, we are sure that with growing awareness and with EVs fast gaining currency, more and more charging infrastructure being set up on our highways, these troubles will be ironed out sooner than we know it. 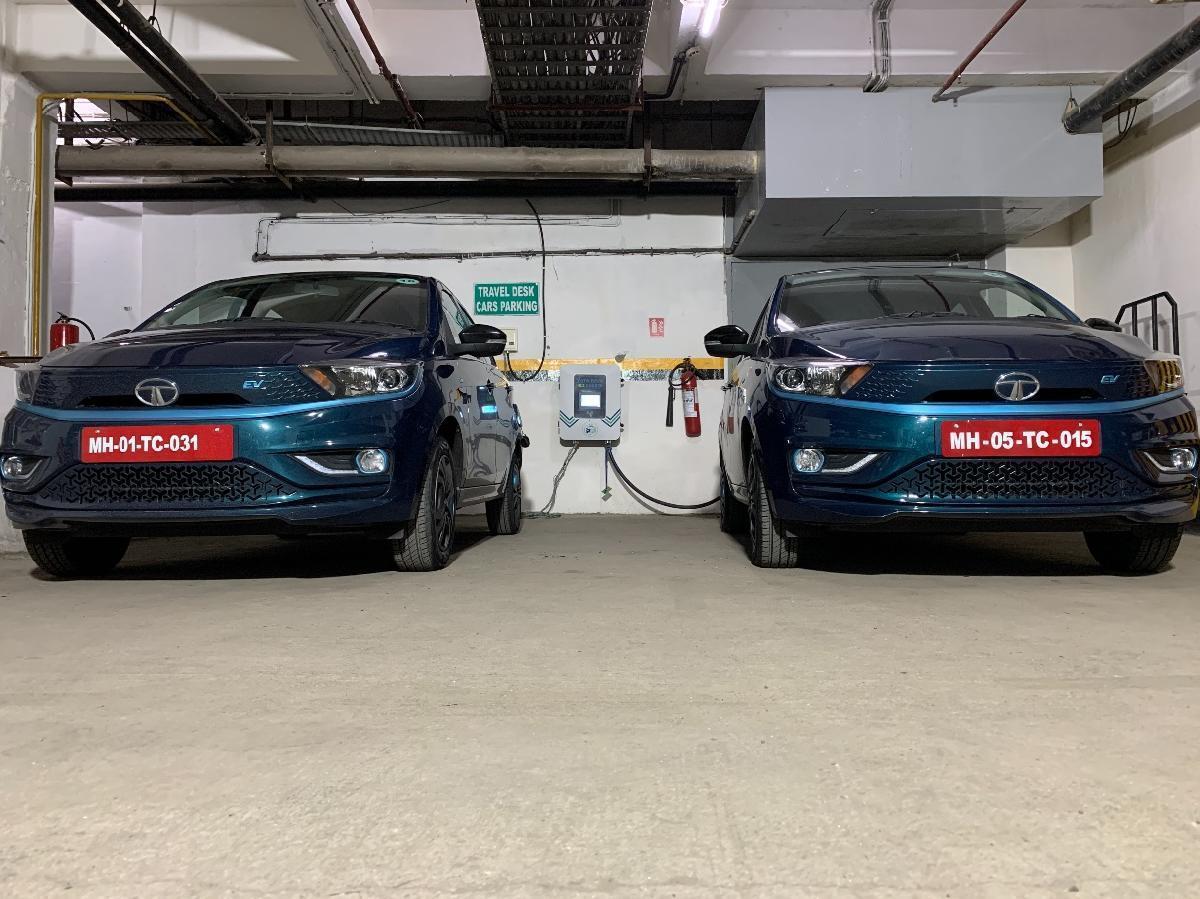 We really liked the way the Tigor EV behaved throughout the drive. In fact, it must be said that the Tigor EV, performed smoothly without any signs of overheating whatsoever. It was ready to race with the slightest tap on the throttle and never once felt lethargic. The steering also did exactly what it was told to and maneuvering it around was actually a lot of fun. However, we do wish that the hard plastics quality inside the cabin and especially on the steering is improved and that it gets more refined plastics and more soft touch materials with lighter interiors. Although the Tigor EV is currently available in the Signature Teal Blue and the Daytona Grey colours, we feel that a few lighter EV colours also would be greatly appreciated by EV buyers who want to distinguish themselves from the IC Engine owners and though the green number plate does that, you still have to squint your eyes for that one, especially when you’re trying to figure it out from afar whereas a whole new EV body colour can do the trick just as easily while elevating the whole EV ownership experience to a whole new level. Also, when we were driving the Tigor EV around, not once did we feel insecure inside despite some really fast driving and truly, that is just the kind of confidence that this sedan inspires because of being rock solid in all aspects, especially safety. Plus, the Global NCAP 4 Star rating that it has received also adds to its bragging rights. 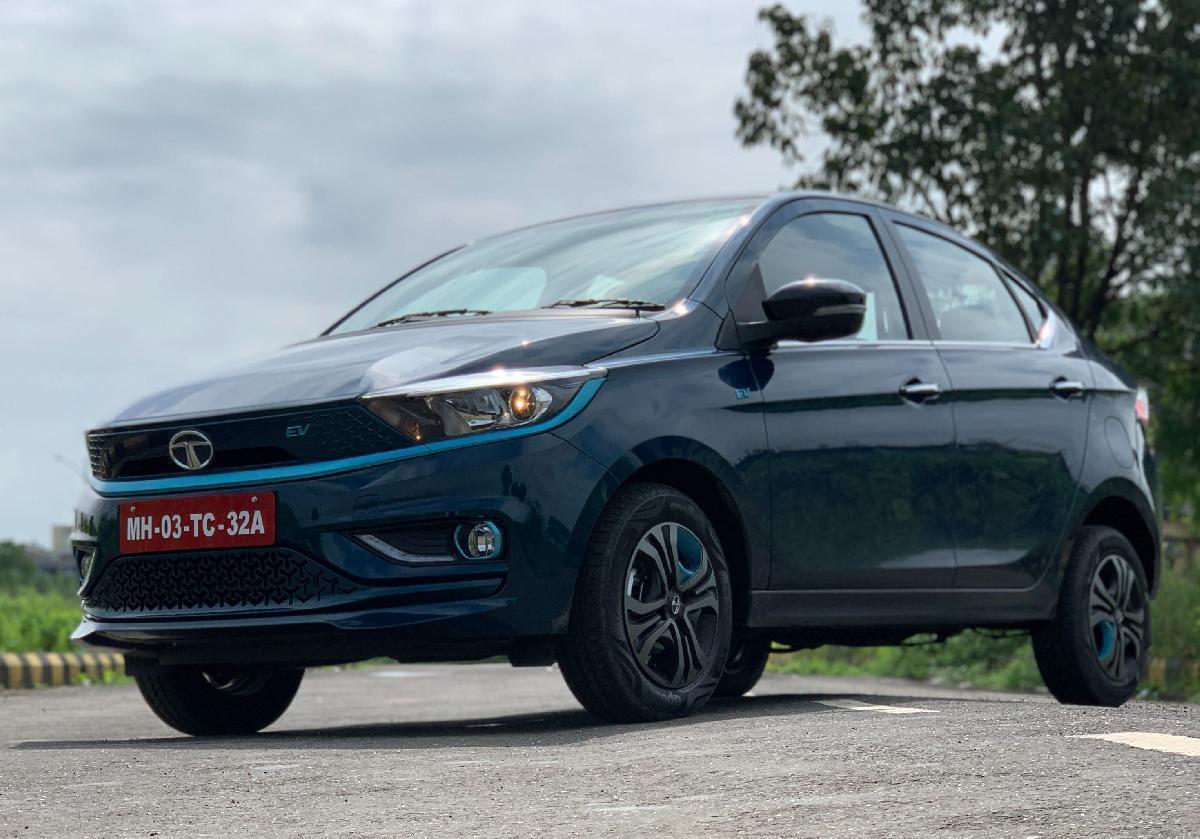 The Tigor EV which starts at INR 11.99 lakh is available in four trim levels. The sedan also gets two airbags and ABS with EBD, a reverse park-assist, speed-dependent auto-locks and a bunch of other safety features making it a safe choice for buyers. So, then should you buy one? If you drive mostly within the city and want to keep pace with the latest technology – yes! If you drive to other cities often, yes, again, just make sure you know exactly where you will be stopping for your next re-charge break in advance. And for all those out there who abhor the idea of driving silent cars and like all things loud and polluted, let’s just say that your metamorphosis is coming and will happen even before you’ve finished saying “Kafka.”