Guess what’s common to Kolkata and the brand Royal Enfield? Both are ostensibly British creations that are now distinctly Indian. Naturally, a joy ride through the city on the new Royal Enfield Classic 350 results in some fascinating thoughts and photo ops.

Contrary to its current very Bengali identity, Calcutta (or Kolkata as most would know it now) actually began as a very British city. The man who established it in 1690, Job Charnock, was British and it remained a British city until Independence. In fact, it even served as the capital of British India from 1858 to 1911. On the other hand, the iconic British maker of motorcycles, Royal Enfield, has remained in Indian hands for several decades now. Despite its very Indian modern identity, the brand began life in distant Redditch, England, in 1901. In the post-Independence era both, Royal Enfield and Calcutta, remain shining examples of British heritage, albeit touched with an Indian flavour. To me, this curious parallel became a call to explore the iconic city from the saddle of the brand’s spanking new Classic 350.

One of the most difficult bits about exploring a city as rich in its heritage as Calcutta is, having to decide what to leave out of the route plan. After much deliberation, I decided to omit the old Indian quarters. Their rich heritage isn’t exactly British, while a more practical consideration was the fact that the roads and streets there aren’t conducive to motorcycle photography.

I imagine, the good folks at Royal Enfield would have gone through a similar crisis while trying to reinvent the Classic 350 – the company’s bestselling motorcycle for a decade. Would it be okay to leave out the kick starter? Or, the switchgear perhaps? What about the engine and the frame? Eventually, they too, I reckon, settled things using the same kind of logic that I did, when deciding on my route plan for the day. Keep the stuff that’s absolutely critical to retaining the motorcycle’s identity and its British heritage while leaving out the bits that aren’t conducive to the job, and adding the much needed stuff. So, out goes the kick lever that is growing increasingly irrelevant as engine reliability and battery capacities improve exponentially, but in comes a digital-analogue clock that offers the charm of the old but now has modern conveniences like a fuel gauge and multiple trip meters. 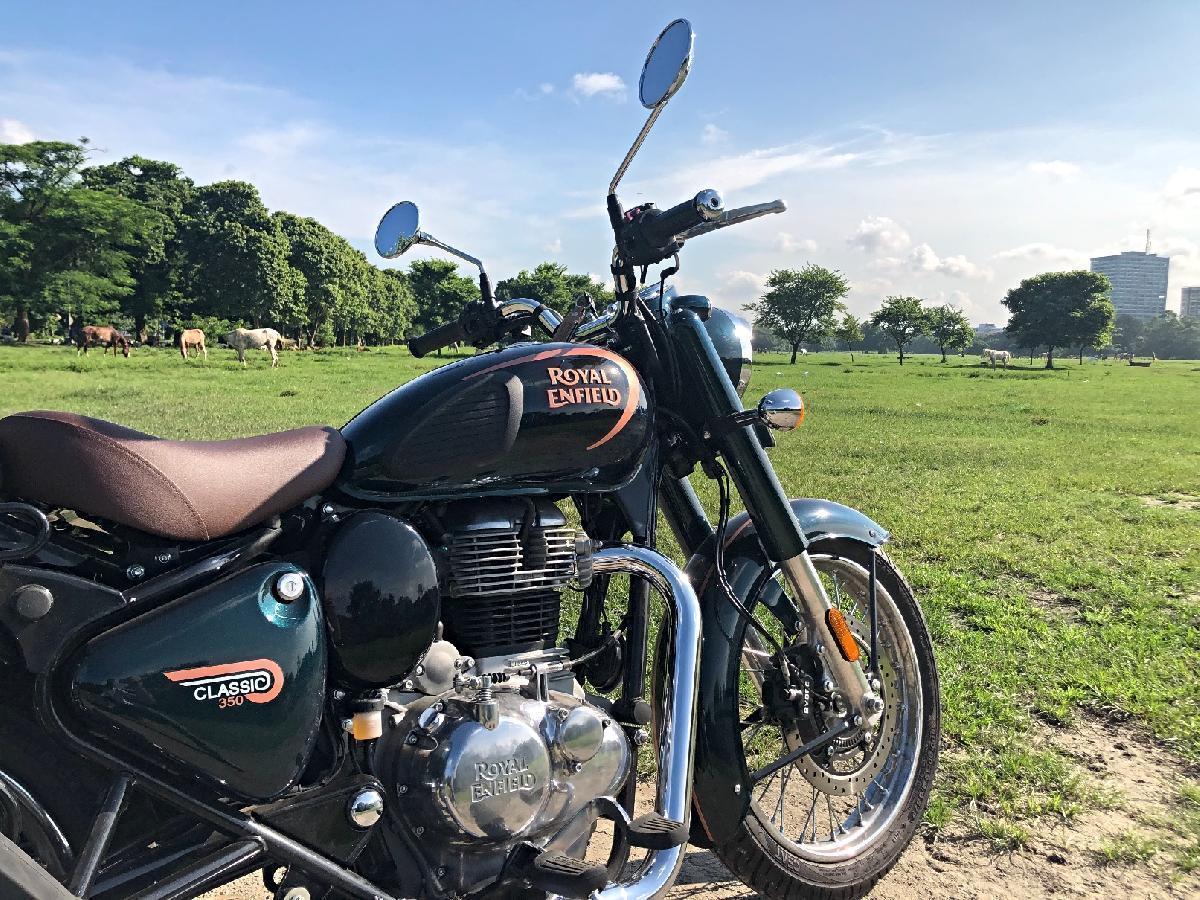 At half past five in the morning, the air is crisp as I ride towards Dalhousie Square, a huge water tank with a garden that is now, ironically enough, named after Binoy (Vinay), Badol (Badal) and Dinesh, three Bengali revolutionaries of the Indian Freedom movement. With the Writers’ Building, the General Post Office (GPO) and Town Hall, all located within walking distance of Dalhousie Square, this was the beating heart of the governance around which British India was centred once.

In the case of the Royal Enfield, at the heart of the new Classic 350 is the spanking new 349cc air cooled single cylinder engine with an oil cooler. It is this very unit that forms the centre of the motorcycle’s existence. Everything that comes after, the ride, the joy, the thrill, the power, is built around this structure. Take this out of the motorcycle and the smooth and willing propulsion that manifests itself in a smile inside the bright red half face helmet with the yellow bubble visor, simply wouldn’t be there. The joy of twisting the right wrist and experiencing that rush of acceleration, generated by tons of grunt at the bottom and middle of the engine’s rev range, would cease to exist.

On my way out of Dalhousie Square, I ride past the old Akashvani Bhavan, which is the HQ of the All India Radio (AIR) in the East. Constructed in 1958, it was the seat of mass communication back in the days before TV. From the Akashvani Bhavan I head towards the Strand Road that runs along the banks of a wide but lazy Hooghly. Along the way, the new and improved saddle of the Classic 350 communicates every undulation to my bottom just as well as AIR must have relayed news of Indian milestones to the people back in the day. 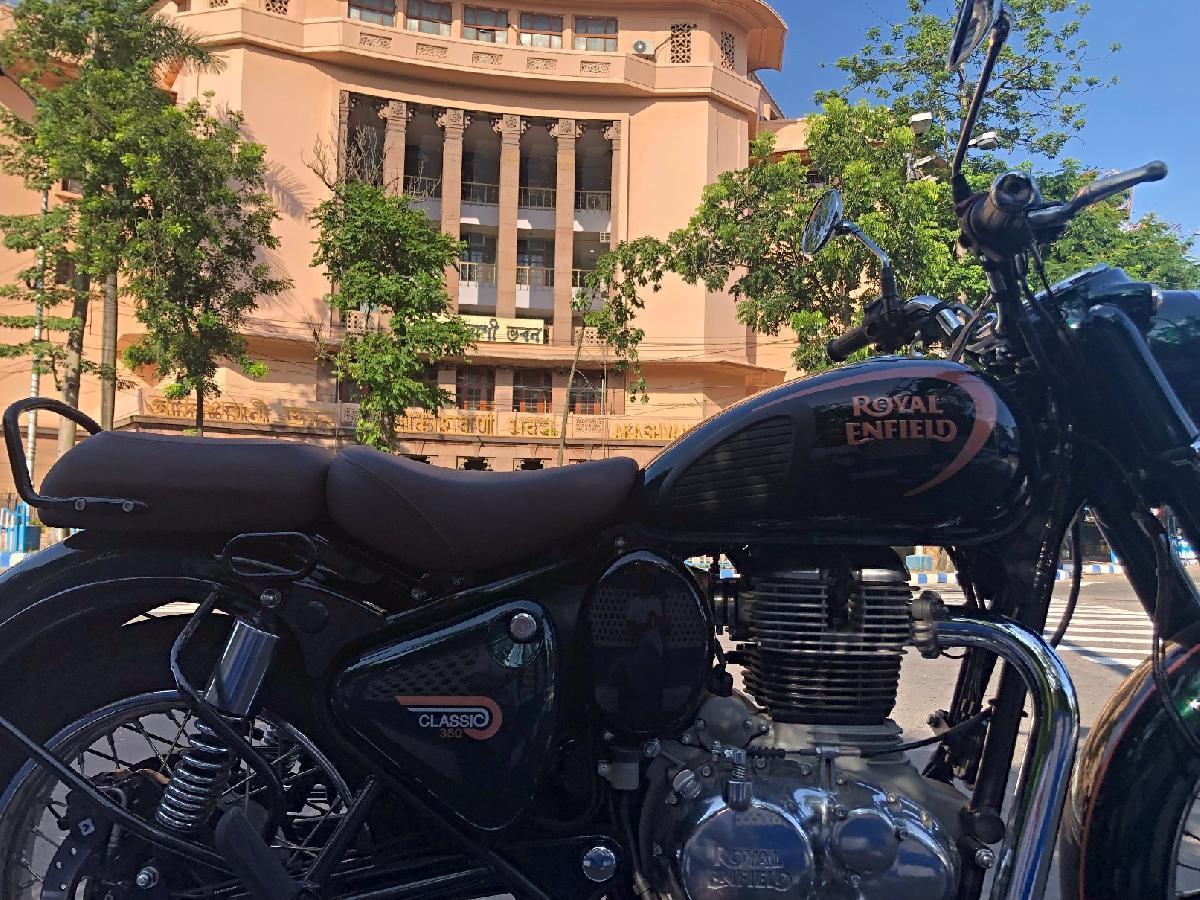 At the end of Strand Road is the James Prinsep Ghat, a beautiful colonnaded structure. Restored in recent times, it can be seen as the backdrop of a song in the hit Bollywood movie, Parineeta. Symbolically enough, the James Prinsep Ghat lies in the shadow of one of Independent India’s great marvels – the Vidyasagar Setu. Popularly called the Second Hooghly Bridge, this is India’s longest cable stayed bridge, a feat of Indian engineering and construction. Farther up the river one can see the outlines of an older British feat of engineering – the Howrah Bridge. It’s almost like the old Bullet and the new Classic 350, one inspiring the other to the same purpose. While the bridges connect the twin cities of Calcutta and Howrah, the motorcycles seek to offer the same idea of pure motorcycling. 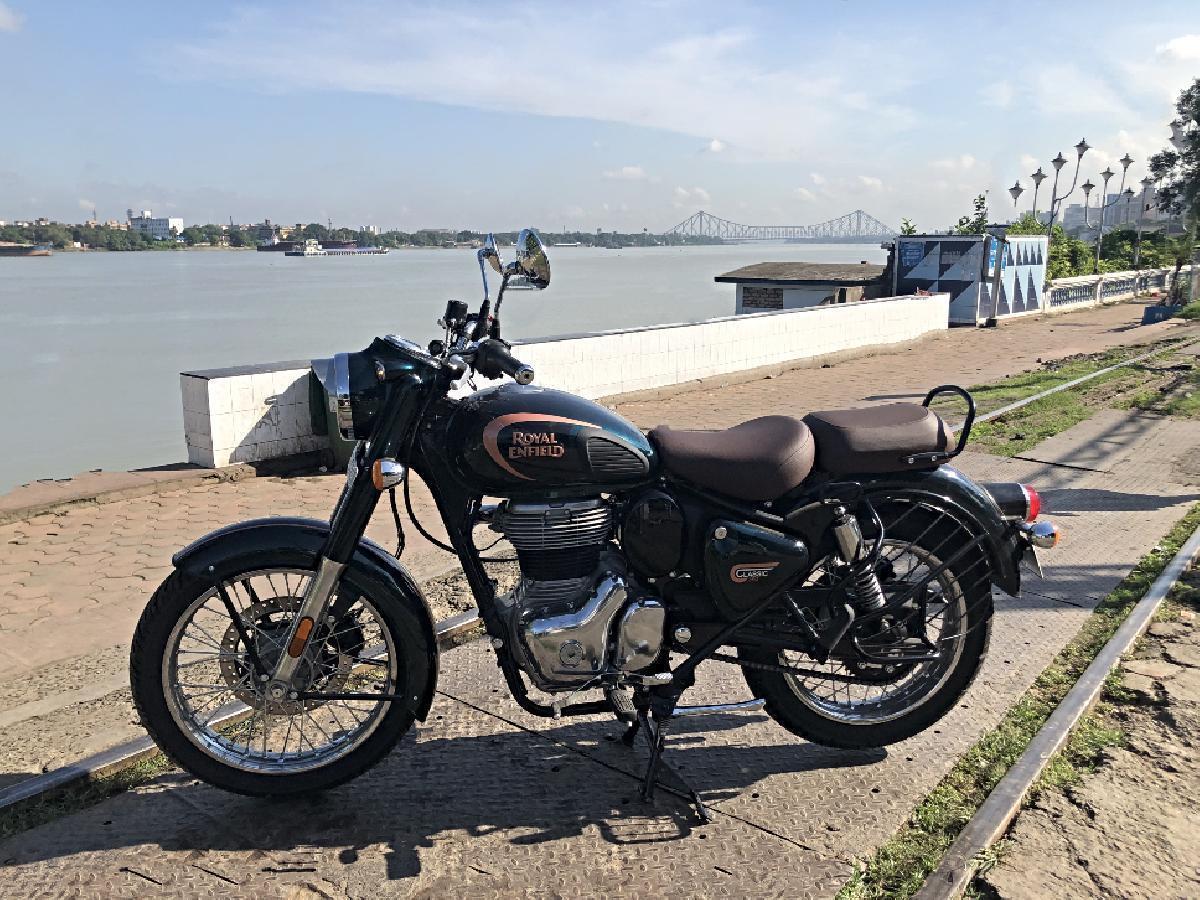 By now it’s 7 and the sun is already beginning to get a little bright, so I head towards Red Road. This straight mile long stretch of tarmac in front of Fort William could be used for landing Hurricanes and Spitfires long before any aeroplane of war was landed on any Indian expressway. The straight stretch at this hour is relatively empty and I decide to test the acceleration of the new engine. There’s plenty of grunt and acceleration is brisk with good response from the throttle. Even in-gear acceleration is very good, thanks to the torquey nature of the motor. The stand out feature however has to be the refinement levels. It is unlikely that you will end up with tingly palms and feet at the end of a long ride. Thanks to the counter balancer, the levels of harshness are much lower than before and that, I reckon, should make for less fatigue when riding over long distances. After a few runs up and down the road I decide to cruise happily on to my next destination, to the sound of a new ‘thump’ from the new motor.

At the end of the road, the traffic signal turns red quite suddenly, and fearful of the white liveried traffic sergeant on the other side of the intersection, I haul on the Classic 350’s new brakes (300mm disc with twin piston caliper up front and 280mm disc at the back with a single piston caliper) that are equipped with dual channel ABS. The bike’s 195-kilo kerb weight is a handicap but the brakes are more than up to the job of killing the momentum. I don’t even end up violating the white stop line. When the light turns green, I ride past the sergeant who gives me a cheery nod and a thumbs up at my ride.

My final stop is perhaps the most recognisable landmark of my city – the Victoria Memorial Hall. Constructed in the 1920s to commemorate the Empress, this ostensibly British monument was built to recreate the splendour of the Taj Mahal here in Calcutta. Its grand cupola and the four minaret like towers combine with European architectural cues to create a unique amalgamation of Indo-European construction; much like the Classic 350. As I ride back home, the city is now fully awake and traffic is just beginning to make its existence felt. Weaving my way home, I get enough opportunities to use the newly designed retro switchgear. They are well finished and fall to the thumbs on either side easily. However, it will take you a few kilometres before they begin to feel intuitive.

The other thing I realize, while riding through traffic, is that the weight of the bike, which lends itself to straightline stability, also robs it of agility. But then, that’s not why you, the agile commuter cutting through traffic, would ride one in the first place, would you? No, you do it for vastly different reasons – for the experience of it and for its timeless appeal. Much like my city. After I park the bike and kill the engine, I can’t help but smile… What a classic ride this has been!