Ferrari 296 GTB: Twice as much Fun

The 296 GTB is a sharp-looking hybrid supercar that is a hoot to drive.

I took the Ferrari 296 GTB for a spin on a beautiful crisp December morning and was blown away by its unique ability to be both, a silent cat on the prowl as well as a roaring speed monster. Which mode did I enjoy driving it in more? Read on to find out…

If you ask me about the Ferrari 296 GTB’s looks, I’m still undecided. Do I like it? Do I not? Hard to tell. Primarily because its design blends Ferrari’s classic lines with contemporary ones giving the sportscar a rather unique appearance…one that may or may not grow on you, eventually. There are bits that I absolutely love on it, the rear haunches for instance, and then some bits not-so-much.

But then, a Ferrari is a Ferrari is a Ferrari. What people think of its looks doesn’t matter much because what Ferrari has gone and done is build one of the most aerodynamic sportscars out there. Every line and every curve bears testimony to the fact that the 296 GTB is actually a track car that is meant to be pushed beyond its limits on a race track and if you’re lucky enough, in your city too, provided your city boasts great roads. However, given the opportunity, absolutely nothing should stop you from indulging yourself and experiencing this speed demon’s dual character – that comes in the form of the plug-in electric motor and the 120° V6 engine.

And so, I got behind the magnificent, semi carbon-fiber, semi-leather steering wheel of the 2.8 sec, 296 GTB, not just to experience all the hi-tech wizardry that the guys at Maranello have fitted onto this supercar but also to experience the wonders of this hybrid supercar, and boy, let’s just say that even the word ‘flabbergasted’ doesn’t do it justice! Like most Ferrari steering wheels, even on the 296 GTB, the steering itself is such a joy to look at with the company’s logo sitting right at the center and finished with a matching yellow thread that never lets you forget that you’re inside a Ferrari. All controls that you need while driving have been built onto the flat-bottom steering, doing away with the need for stalks altogether. 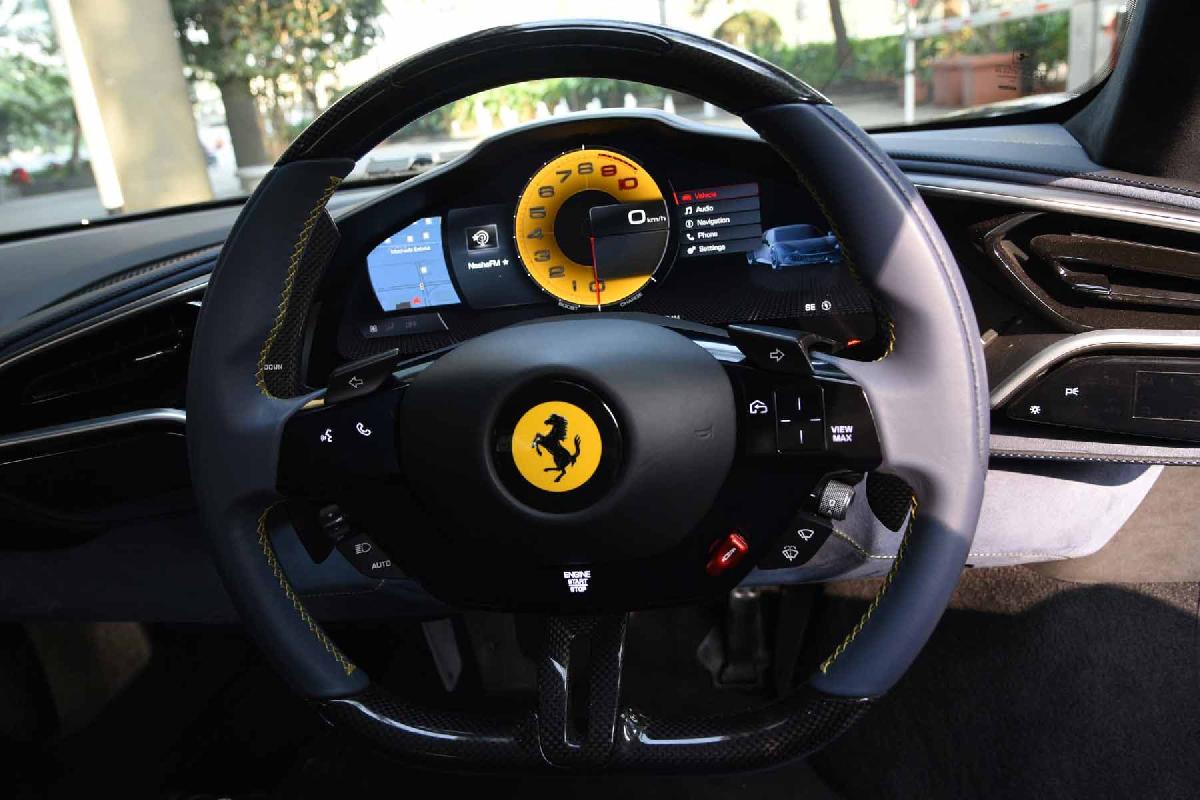 To start the 296 GTB, just insert the fabulously designed key of the 296 GTB in its slot, and very gently press the start button that sits right below the Ferrari logo and voila! You’re all set! 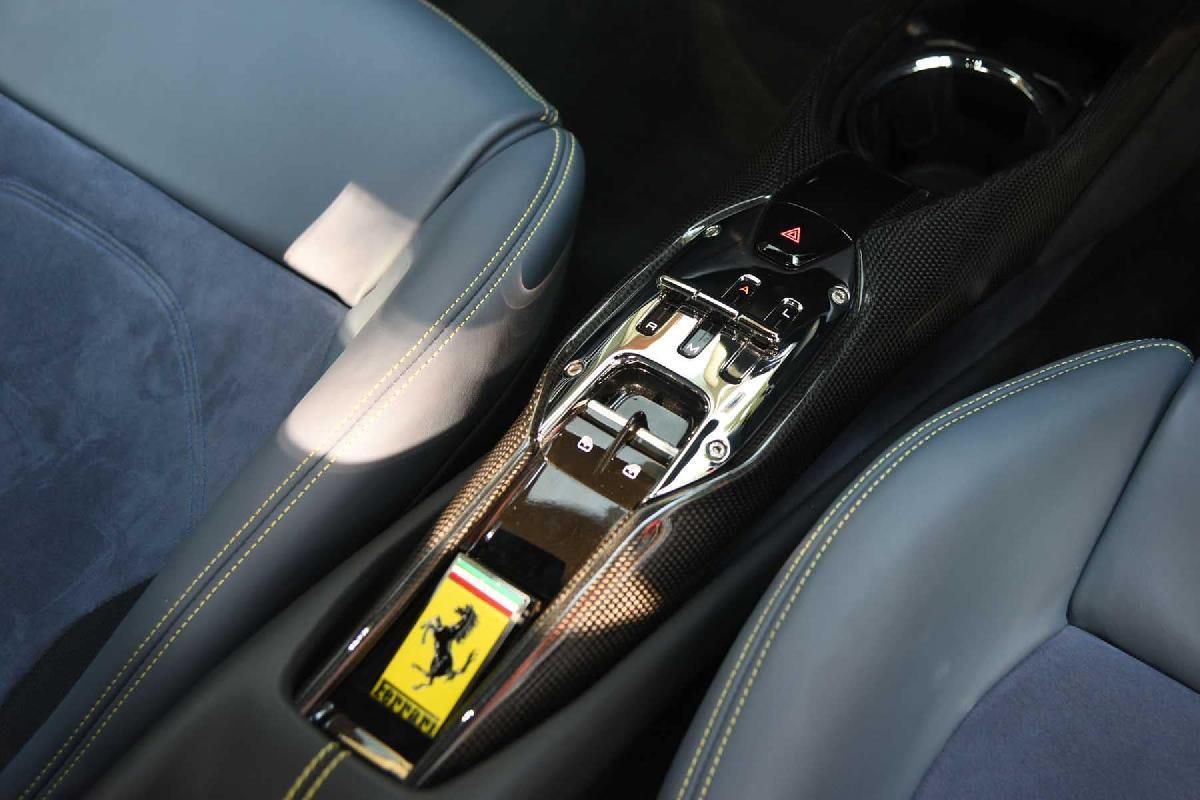 Inside, you’ll notice that the cabin is extremely well-made and feels plush with lots of carbon-fiber, suede and leather. However, it isn’t all luxe in an unhurried, indulgent, and pampering sort of way, rather in a robust, trendier, sportier, and more upmarket sort of way. On the dashboard, you’ll also notice the use of a blue-coloured thread which blends in beautifully with the sportscar’s suede grey and leather interiors. And the best part? The windows of the 296 GTB use Saint-Gobain Sekurit glass – a thermally toughened safety glass that offers superior strength and transparency. 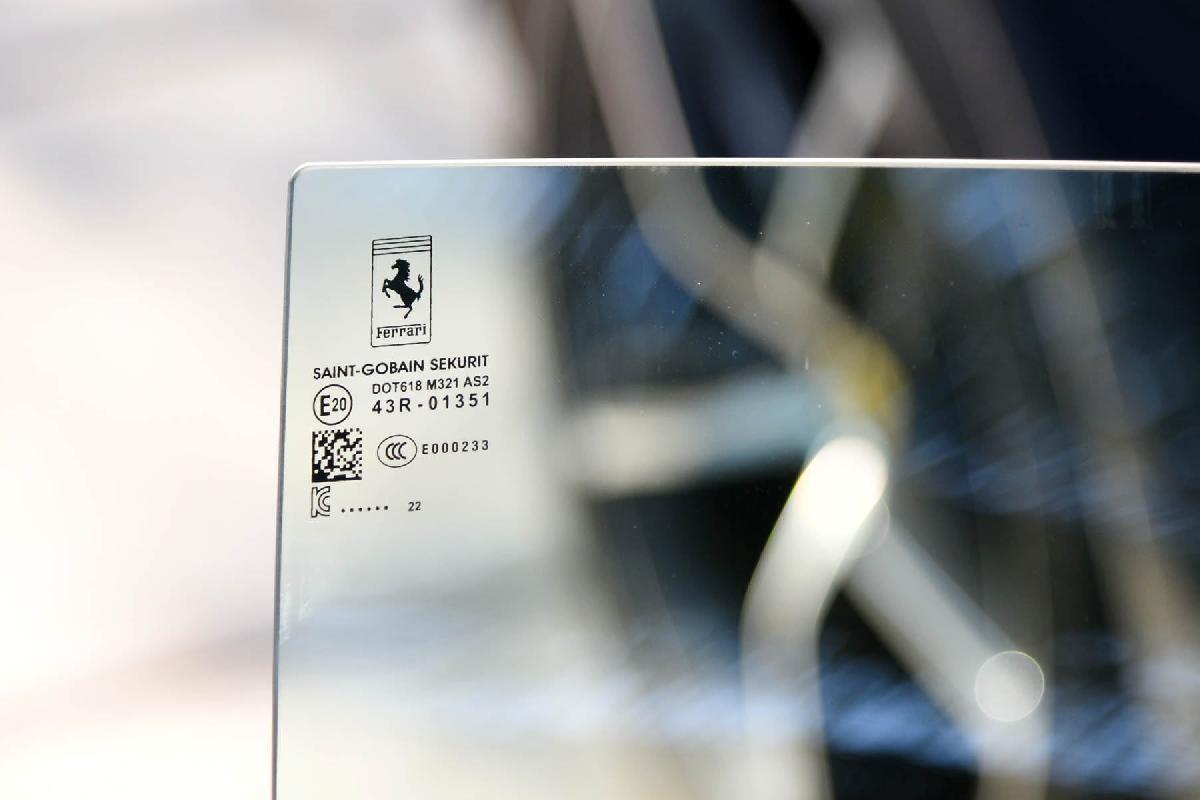 The digital display on the dash with all the info that it presents really gives the 296 GTB a very modern vibe and speaks volumes about the direction in which Ferrari is headed in the times to come. Ferrari has also done a phenomenal job with the passenger side display that sits just above the glove compartment and we absolutely loved its sleek and elegant proportions, not to mention its super-sharp display. 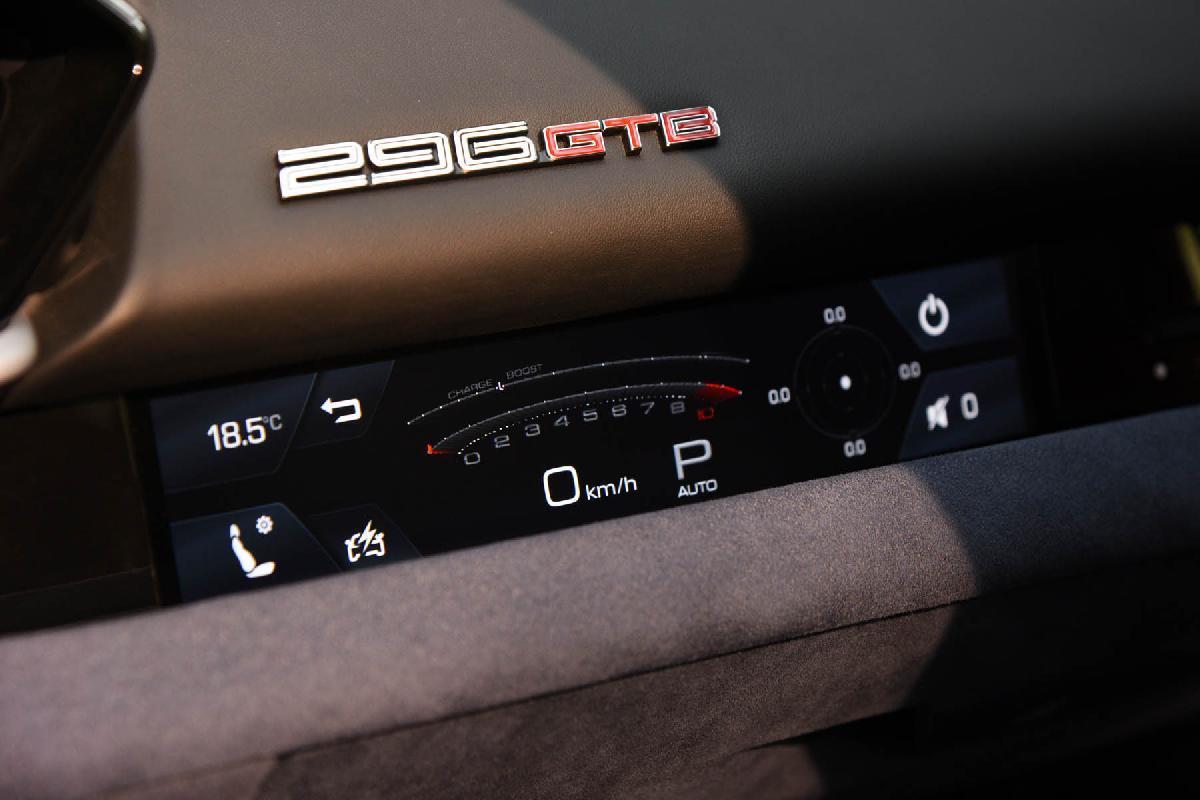 Once you’ve settled down in those ever-so-slightly firm but beautifully contoured seats there’s nothing much to do besides adjusting those ORVMs through a beautifully designed trackpad and just launching off at B-E-E-P (Read prohibitive) rpm.

What powers the 296GTB? This supercar gets a plug-in (PHEV) hybrid architecture where the 3.0-litre, twin turbo, which comes with a 120° V6 engine, a first for the company, and it integrates with an electric motor at the rear. The two power units can be used together or just with the electric motor. The 296 GTB is capable of maximum power of 830hp via the electric motor and is the panacea for all those seeking instant throttle response. The battery pack sits behind the seats and the mid-mounted engine can be viewed through the glass area at the rear and needless to say, it looks absolutely stunning! So does the rear of the 296 GTB. Very attractive indeed. At the front of course is the frunk for the car’s tool kit and a small carry bag that you may want to throw in, if at all. 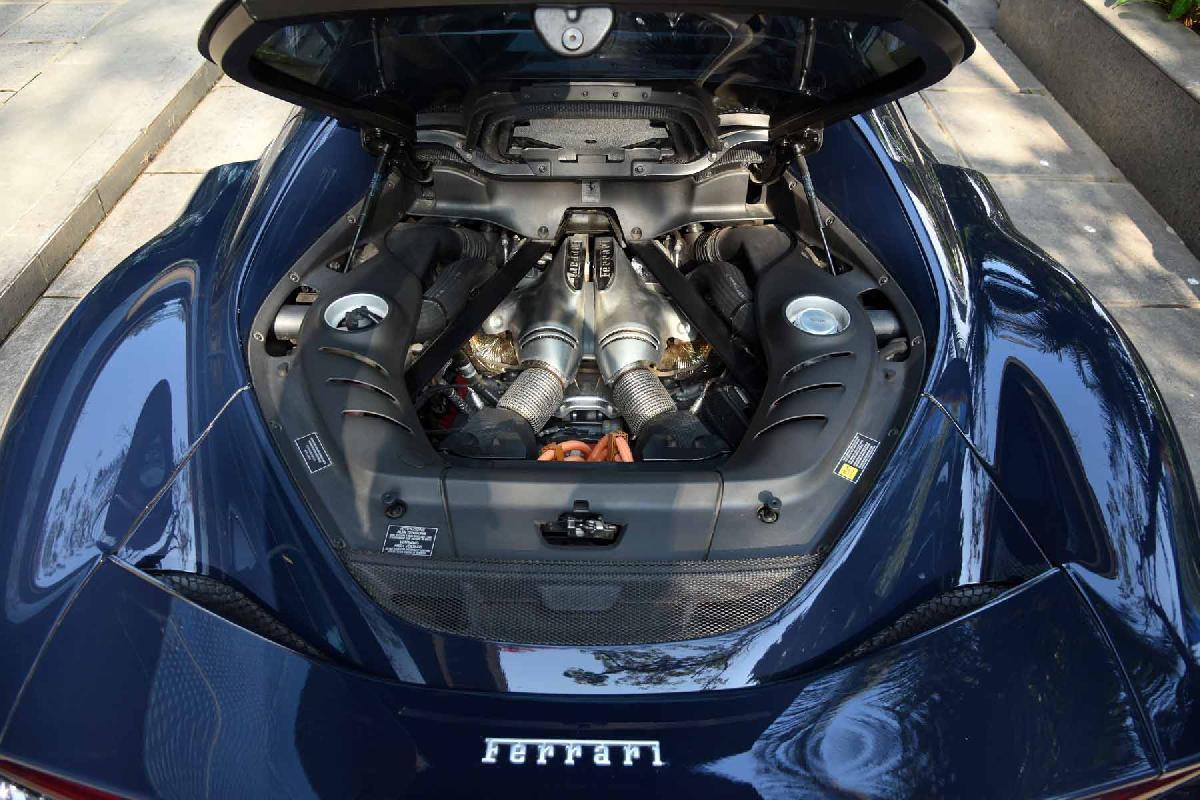 The 296 GTB offers outstanding visibility and just driving this wide (1958mm) and low slung (170mm) sportscar feels really quite extraordinary. Of course, ordinarily, in a city such as Mumbai, I would have had to chart out my route beforehand and know every single speed breaker along the way like the back of my hand before I could even dare to take this sportscar out of the front gate but Ferrari has that sorted. With the press of a button, I was able to adjust the suspension settings and ensure that the 296 GTB did not scrape against any of the speed breakers during my drive through the city’s roads. 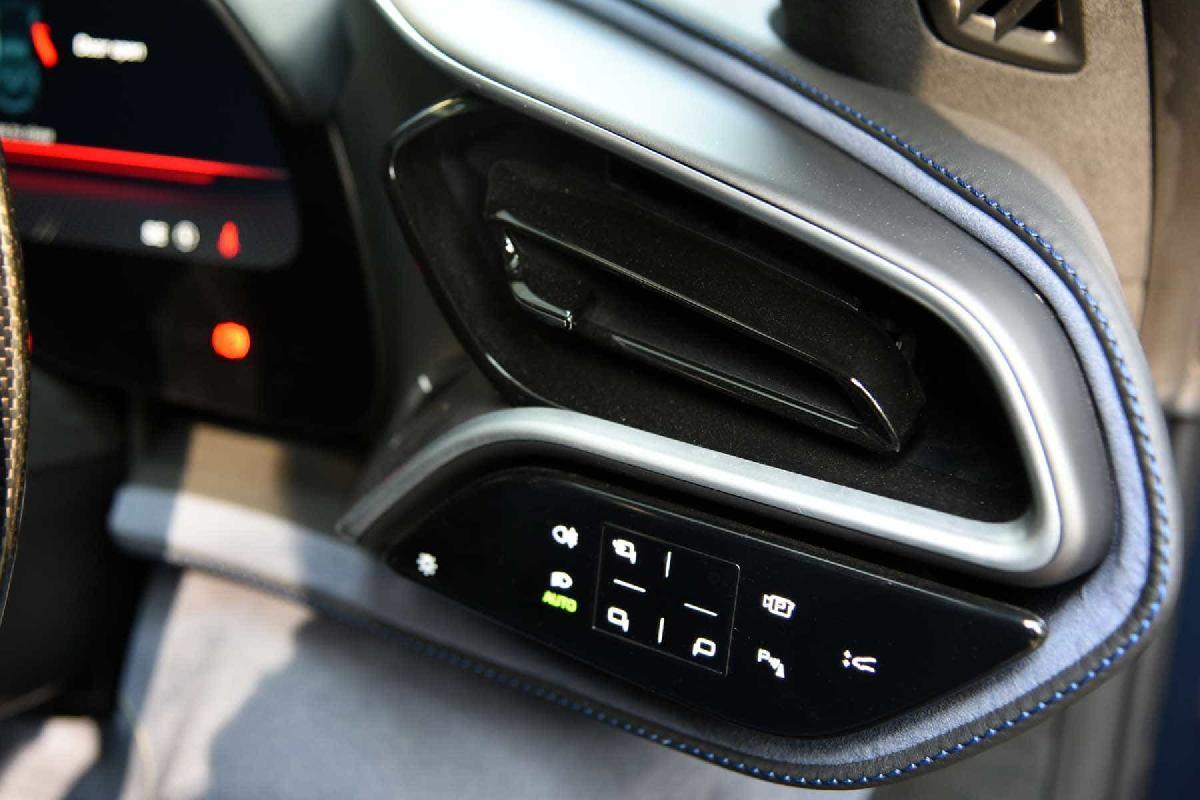 On the road, I soon realized that the 296 GTB is capable of metamorphosing into whatever I wanted it to be. I started by driving it in the hybrid mode and heard almost nothing besides the sound of loose gravel on the road. Come to think of it, it did seem a little eerie in a busy city such as this one, but it was also terrific to discover that this 4565mm sportscar could so seamlessly slide into stealth mode with a flick of a switch. Of course, there was no getting away from the glances that this supercar was getting throughout, especially at traffic lights but it was really cool to discover that you can now actually drive a silent Ferrari, should you choose to, of course. (Sachin Tendulkar…I hope you’re reading this, in case, you find yourself behind the wheel of another Ferrari someday.)

Next, it was time for me to drive this beast in its true-blue Ferrari mode and experience the car unleash its full potential. Switching from ‘Hybrid’ mode to ‘Race’ mode was easy-peasy and the soundtrack of that V6 sure was music to my ears. Afterall, it is not every day that you get to drive a 2.8 second supercar really fast on the streets of Mumbai, and so, I decided to put pedal to the metal and make the most of my time with it. The most remarkable thing about driving the 296 GTB is that within seconds you realize what an engaging car this 1470kg car (Dry weight) is, one that really involves the driver and responds brilliantly to every driver input! Driving this 8-Speed DCT automatic was one of the most thrilling experiences ever and I absolutely loved the throttle response of the 296 GTB. Besides, the manner in which I could feel the tires gripping the tarmac was truly confidence-inspiring. The carbon ceramic brakes had so much bite in them that bringing this mammoth beast to a grinding halt seemed like child’s play. Of course, the R20’s did get hot, after our drive and we did feel the heat around them but then it wasn’t such a big deal either, and hey, isn’t that a given on a car such as this one?

The more I drove the 296 GTB, the more I was fully able to appreciate the role of those large air intakes sitting on either sides of the haunches that I could also see constantly from my ORVMs. There is also the pivotal role that the almost discreet spoiler plays on the 296 GTB and while driving it fast, seeing it tear through the air, gave me a clearer picture of its purpose and remarkable design vis-à-vis downforce. 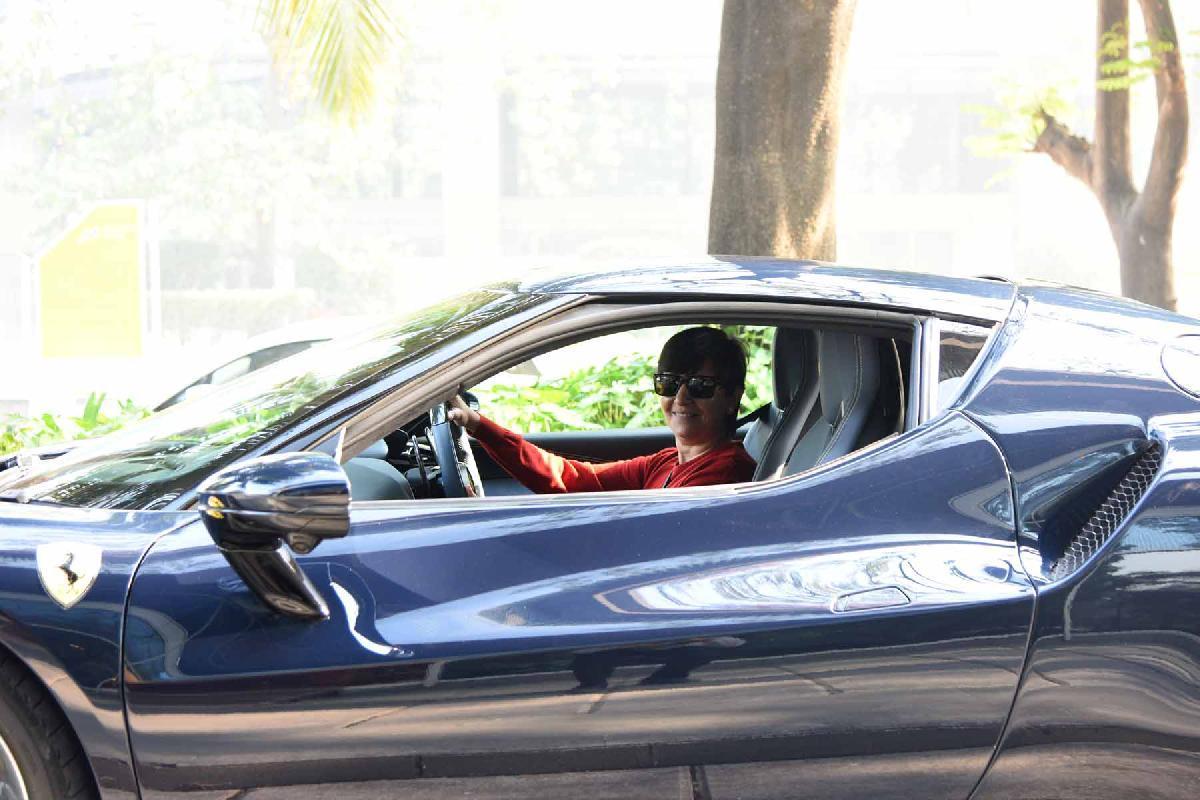 The 296 GTB, despite a firm ride, is a super refined sportscar and incredibly exciting to drive. Even switching between modes couldn’t get easier. Needless to say, for the most part, I drove the 296 GTB in the ‘Qualifying’ mode in tandem with the harmonics while unleashing the 800+bhp and it was just unbelievable how astoundingly fast this car truly is. And what an uproar it created everywhere it went. Hardly anyone out there, that morning, may have not stopped and stared at this 296 GTB which was more than happy announcing its arrival beforehand while being driven in the V6 mode. Also, considering most people are so used to seeing Ferrari cars in either red or yellow, the colour – Blue Pozzi did have onlookers staring at it slightly longer. And, when this car’s curves caught the light, it looked even more spectacular shining in all its glory!

The 296 GTB is a sharp-looking hybrid supercar, and is unlike anything that I’ve driven before. It truly gives us a window into 2025 when Ferrari’s fully electric car is expected to hit the market. After having driven the 296 GTB, I have no doubt that what is coming IN 2025 will only be a much superior offering from this Italian car maker – one that will not weigh heavily on our conscience for further polluting our planet.