The new Tata Safari is here and ready to take on its rivals. But then, does it have a good turn of speed? Read on to find out…

Tata Motors’ Safari, when launched in 1998, went on to take India by storm (and later by Storme), quite literally. Back then, it was the macho SUV that everybody wanted to own. It had the ‘go anywhere, do anything’ vibe and most people did take it places. Now, Tata Motors has brought us the Safari in a new avatar that has been built on the OMEGARC (Optimal Modular Efficient Global Advanced Architecture), derived from Land Rover’s D8 platform, which follows their IMPACT Design 2.0 philosophy. The folks over at Tata Motors are calling it a “fresh, new Safari, with hints of the past Safari.” Having extensively tested the new Safari on different terrains, (Including Khardung La), at varying temperatures from -10 degrees Celsius to +50 degree Celsius, Tata Motors engineers say that it has also been driven at 140 kmph for thousands of kilometers. They also claim that the new Safari does everything that the old one did. Well, like they say… the proof of the handling, is in the driving, so, we decided to get behind the wheel, to determine if the new Safari indeed has a good turn of speed. 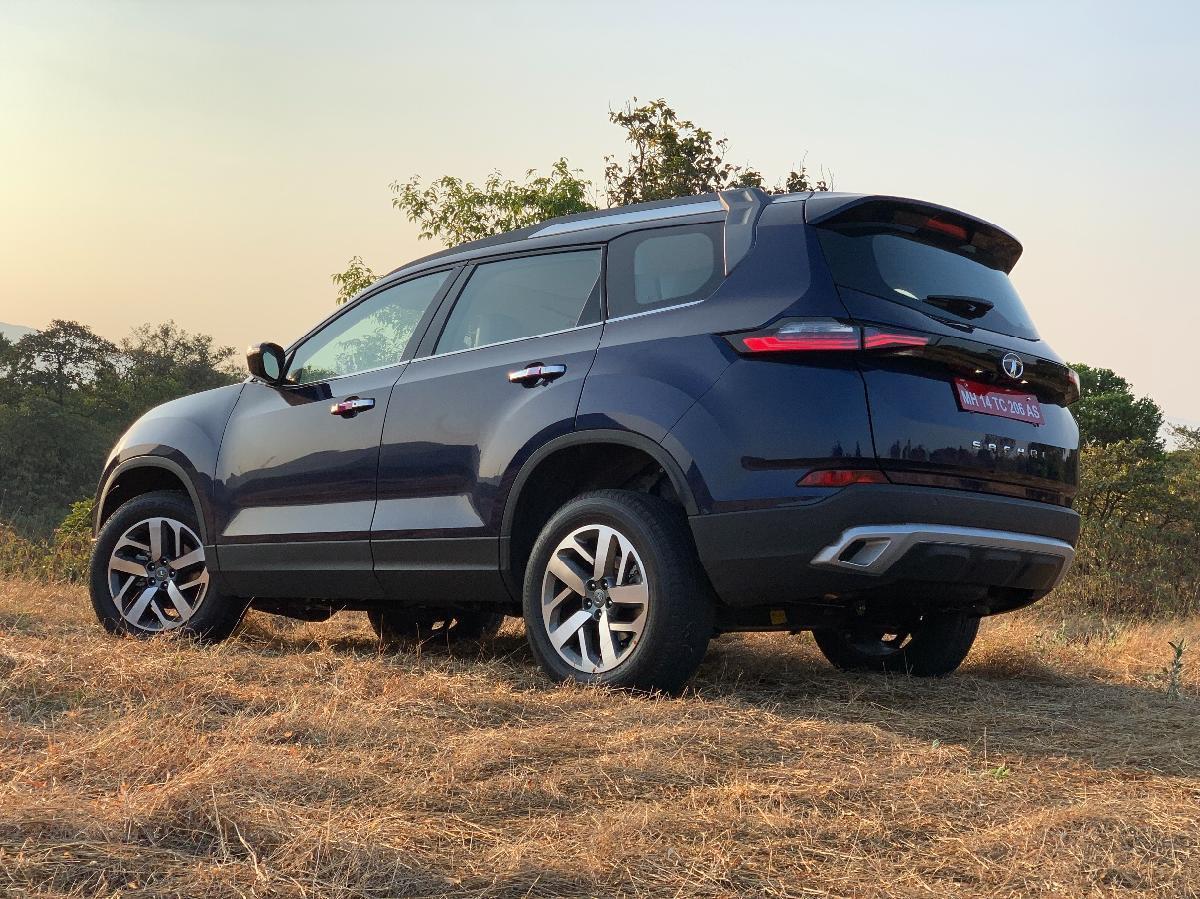 But before that, a few words about the new Safari’s exterior and interior. At first glance, the new Safari, which takes on the Mahindra XUV500, MG Hector Plus, Toyota Innova Crysta, and Maruti Suzuki Ertiga, does not disappoint, thanks to the macho appeal that it retains from its predecessor, despite the fact that it no longer gets the spare tyre mounted on the tail gate. 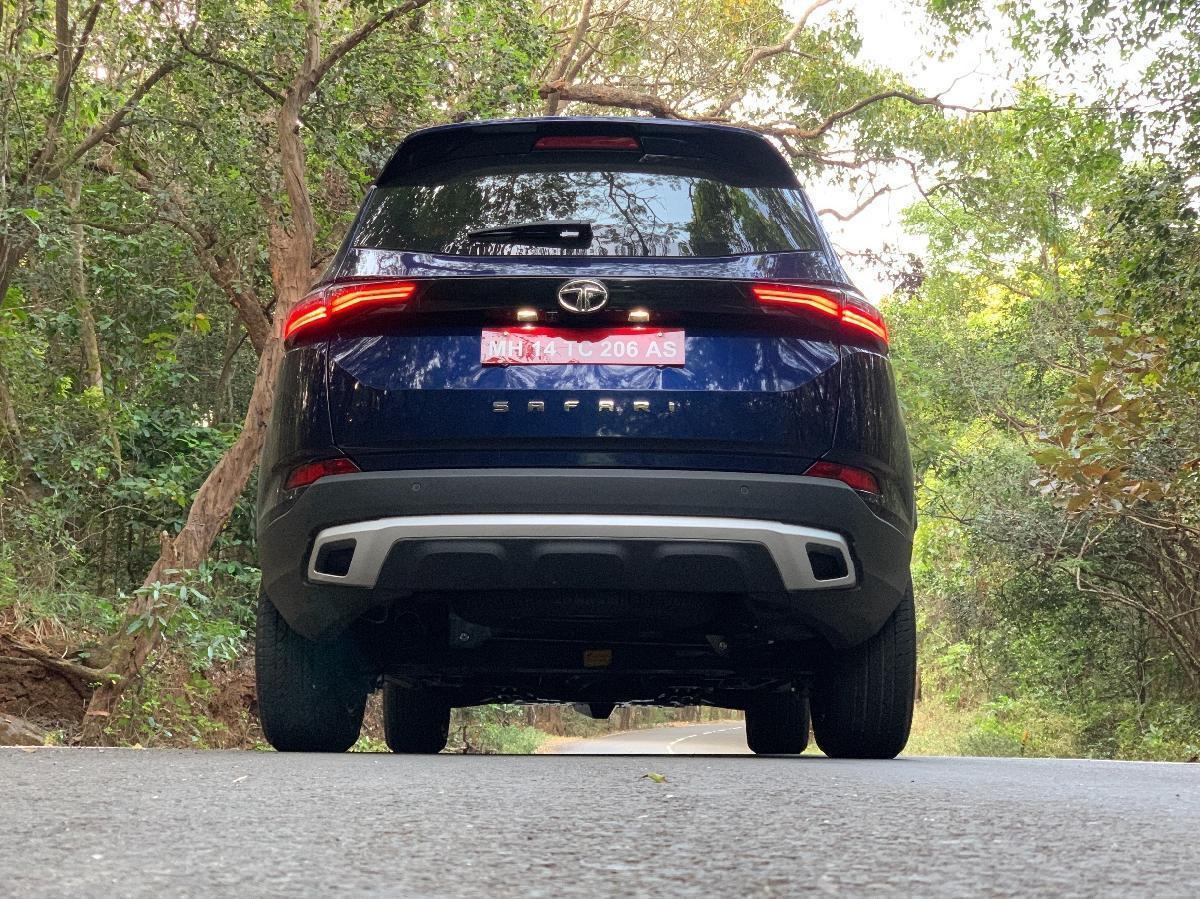 In fact, the appeal has now, only gotten stronger, and risen a few notches higher in our eyes. Yes, the carefully crafted proportions of the SUV have a great deal to do with it. Everything about the new Safari feels solid and well-constructed. And why not? Afterall, extensive use of high strength steel has been made to ensure that the new Safari feels hardy and robust, and it is apparent when you see it. Take the way in which the large doors of the new Safari slam shut – with that re-assuring ‘thud’ which speaks volumes about the solid build quality of the SUV. What the new Safari now gets are Xenon HID Projector headlamps and Signature Twin LED tail lamps, an imposing grille with the tri arrow design and some bling on it, strong dual tone front bumper with an integrated skid plate, beautifully designed wheel arches that are the perfect shape – neither too square, nor too round, twin tip exhausts, functional roof rails (not on variants that get the panoramic sunroof) and 18’ inch machined alloys, all of which only goes to show the amount of attention paid to ensure that they have struck the right balance between the old Safari and the new one. 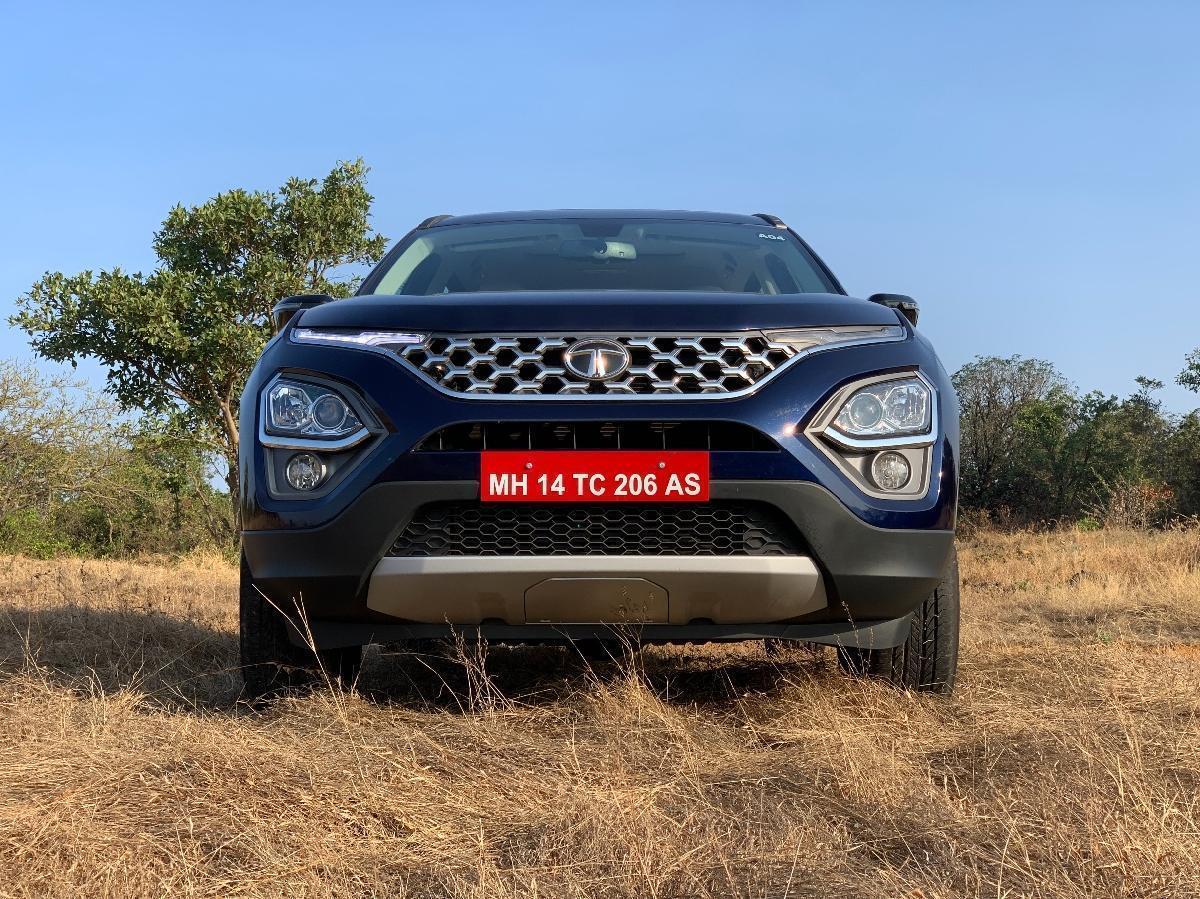 On the inside, the first thing that you’re greeted with is the Oyster White colour theme which looks stunning. However, I wished that the Safari’s steering also came in the same- coloured leather finish, just like the steering of some high-end cars do. Maybe Tata Motors will consider this feedback for their next edition. 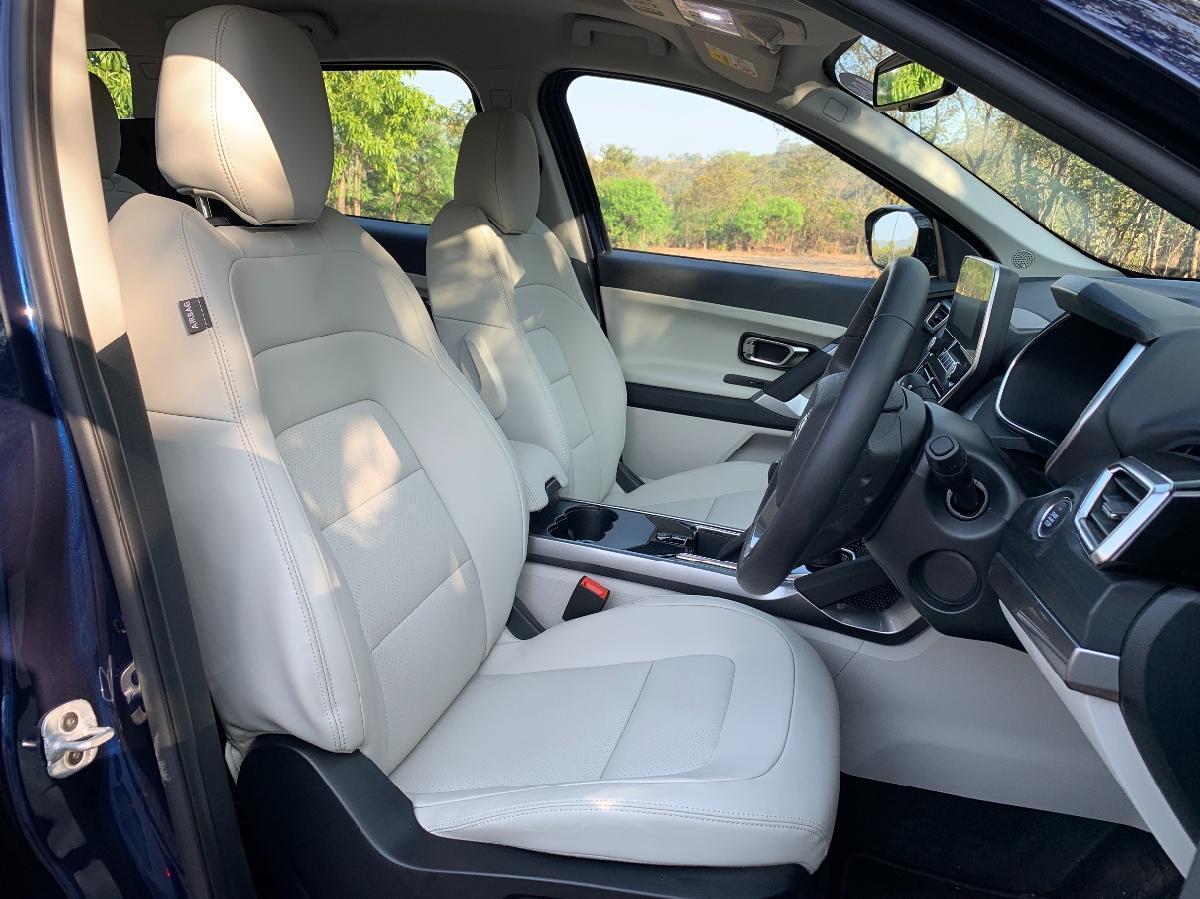 Then there is Ashwood finish on part of the dash which adds the premium look to the new Safari. That combined with the soft touch dashboard with anti-reflective Nappa grain top layer which looks and feels top class, really add to the fit and finish of the Safari. The glove box is spacious and well illuminated. 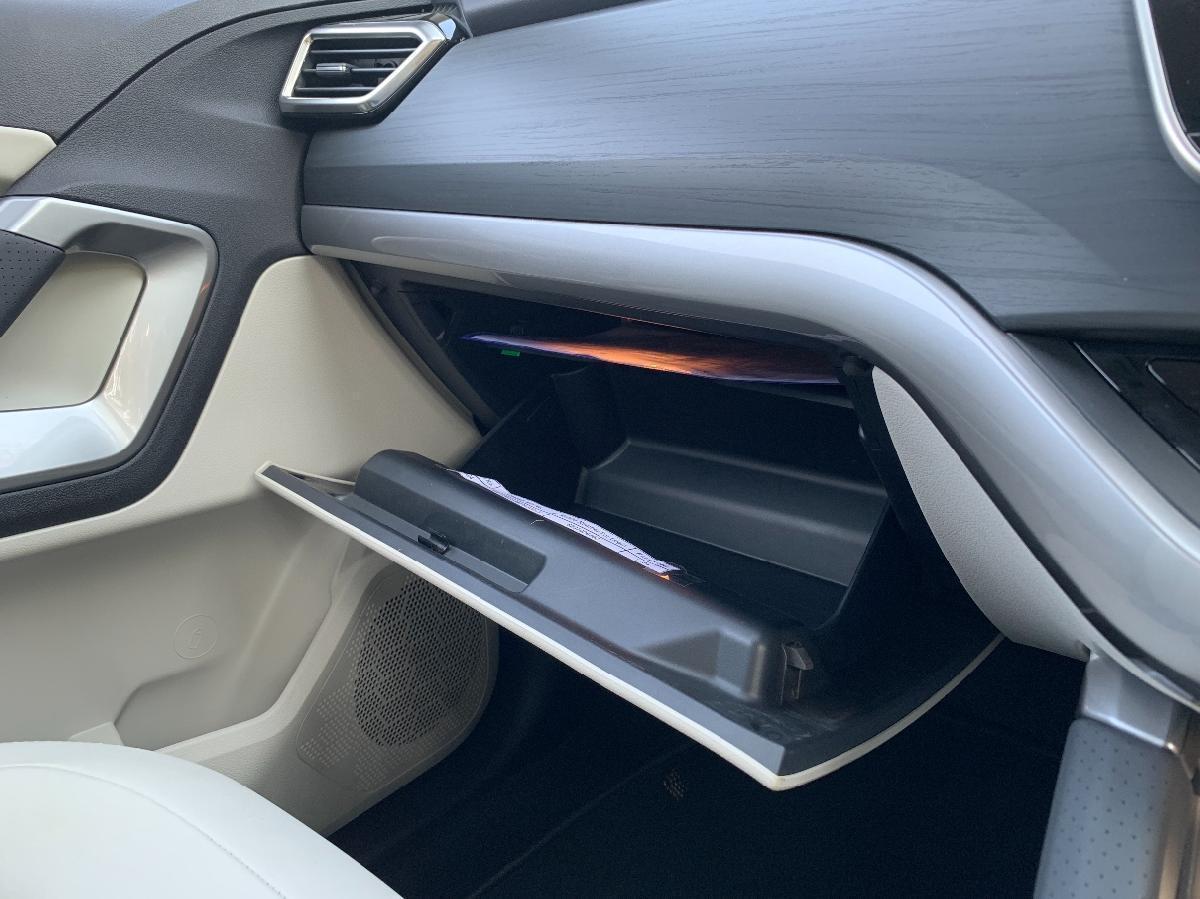 There are well-designed cubby holes for your bits and bobs so that they don’t jump out at you when you’re on the move.

Then, there is the best-in-segment, really large, panoramic sunroof which is just spectacular. It really manages to change the entire manner of experiencing the new Safari from within. There are also dedicated switches for operating the sunroof – not a single switch that performs multiple functions, which really allows you to concentrate on the road while driving, without worrying too much about the sunroof controls which is always a good thing. 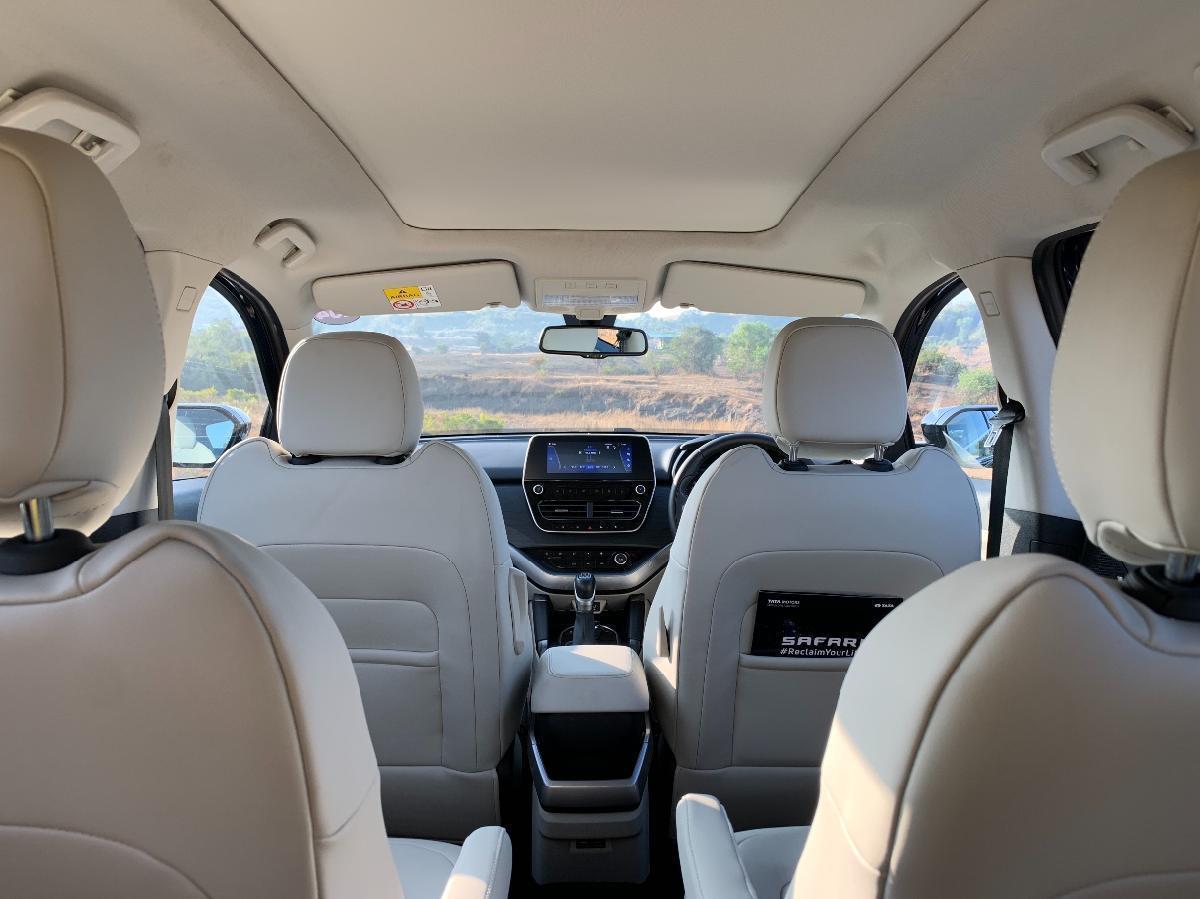 The new Safari gets an 8.8-inch Touchscreen infotainment system and 320W RMS JBL Audio with 9 speakers and an amplifier which do a very good job of keeping you entertained. There’s also iRA (Intelligent Real Time Assist), the connected car technology from Tata Motors, with a host of additional features which also gets OTA updates. 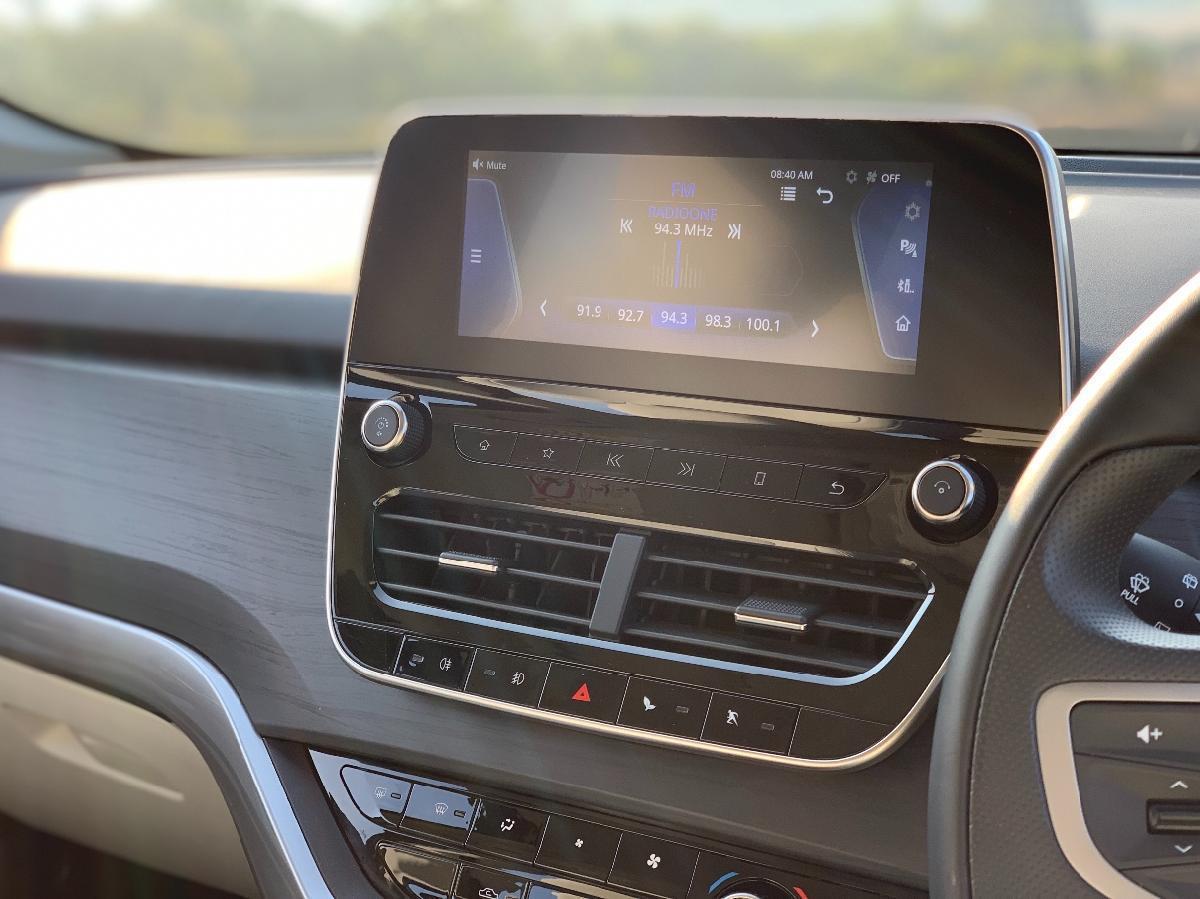 Inside is a lot of space and the Tata Motors engineers get full points for creating the stadium effect successfully. The seating is slightly firm but in a good way and what you get now are front-facing seats, instead of the side facing ones as seen on the predecessor. The second row of seats not only gets more room but also gets the Boss mode which allows you to create more room and stretch your legs further. 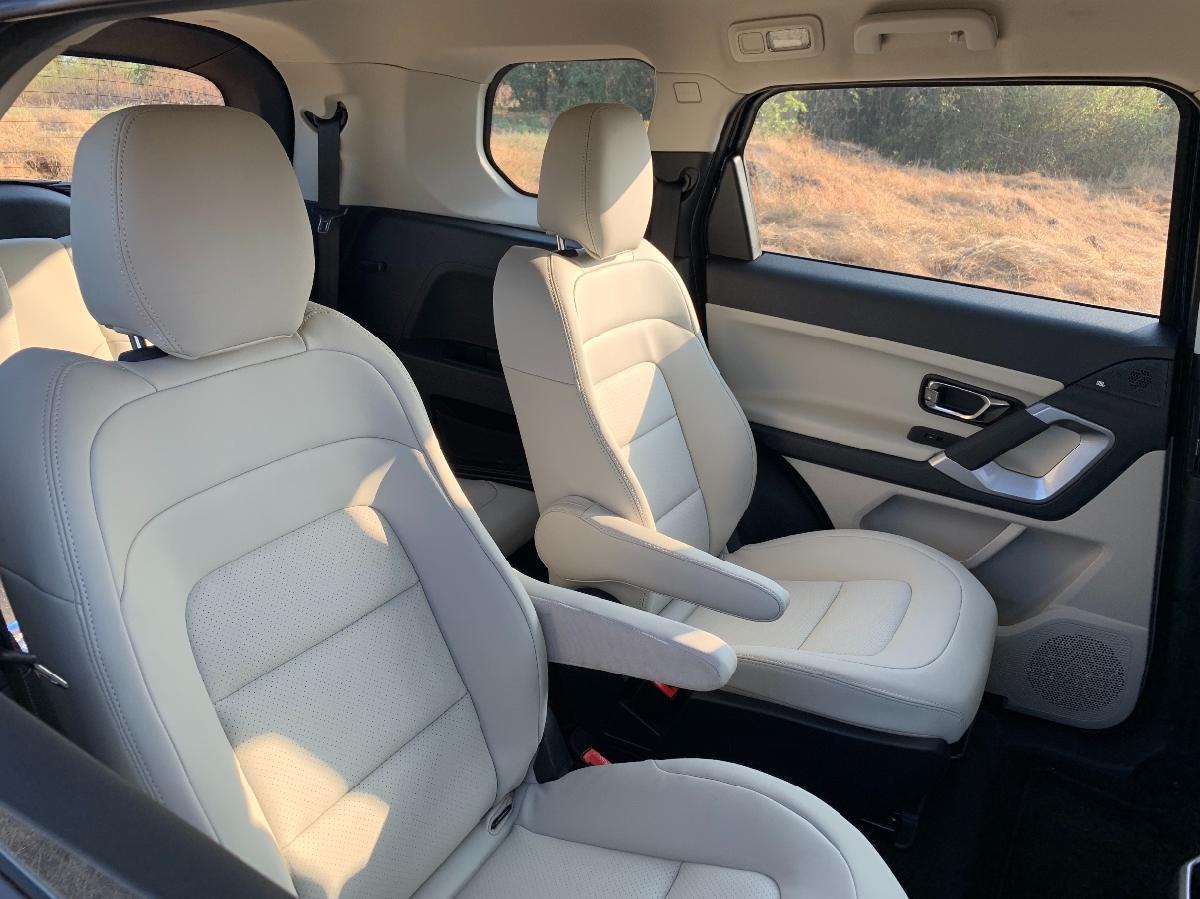 We were hugely impressed with the third-row of seats which is by no means what one would call in other rivals – a compromise. In fact, it wouldn’t be far-fetched to say that the third row of seats in the new Safari is the best in the segment. 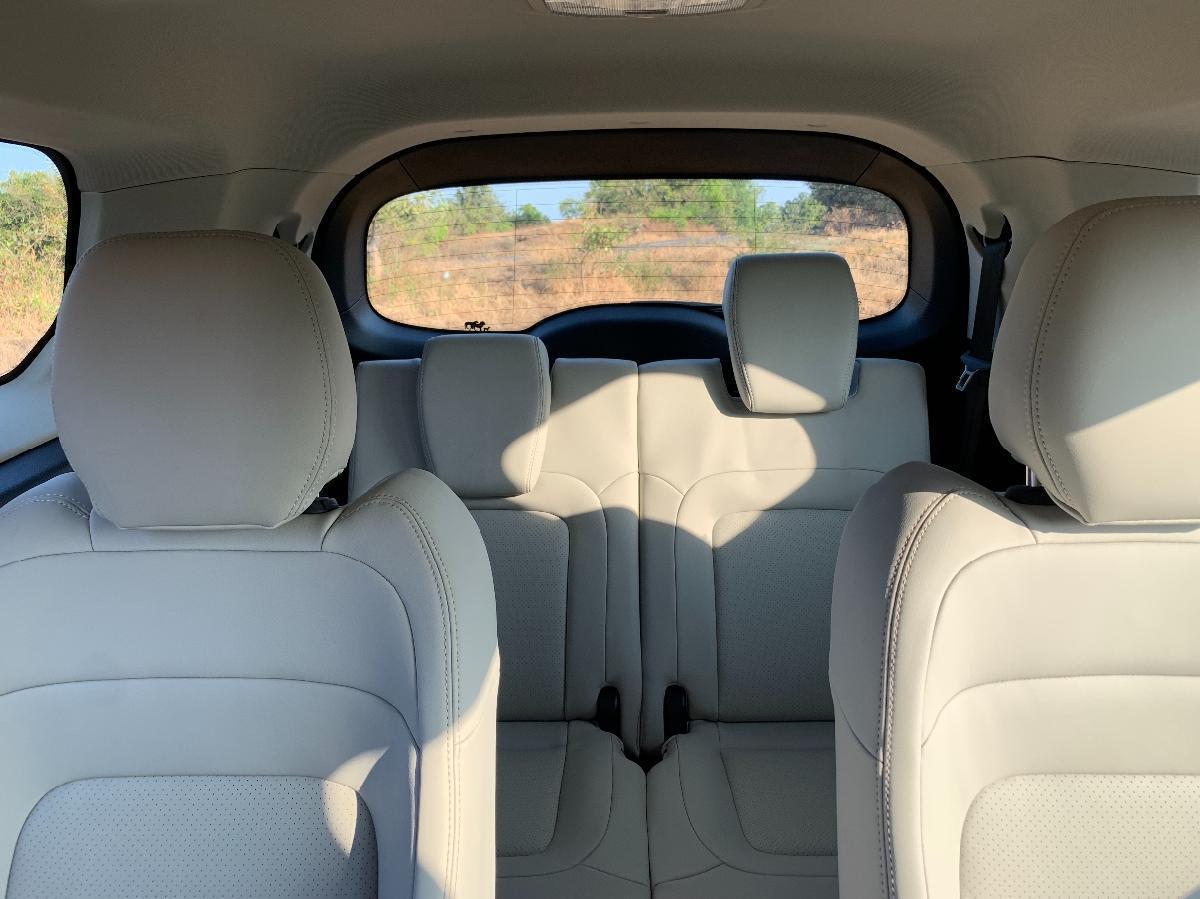 The floor to seat cushion height, 315 mm with a backrest angle of 23 degrees is perfect for two adults to sit behind during long journeys and the amply sized rear three quarter glass ensures that nobody feels claustrophobic while seated there. 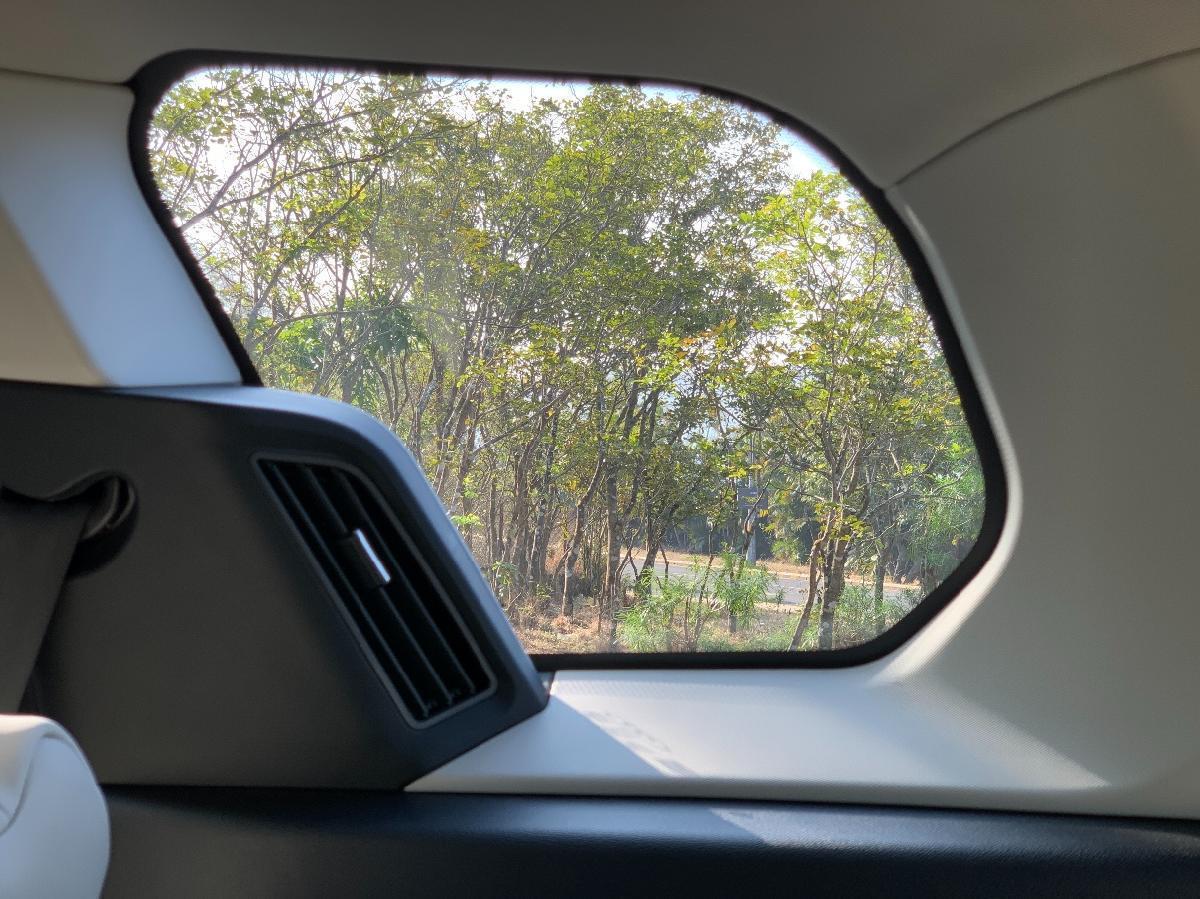 From cup holders to USB ports, to air con vents, every conceivable comfort has been thoughtfully provided so that long journeys can be made comfortably without having to stop frequently for the third-row passengers who often need to stop and stretch their legs. 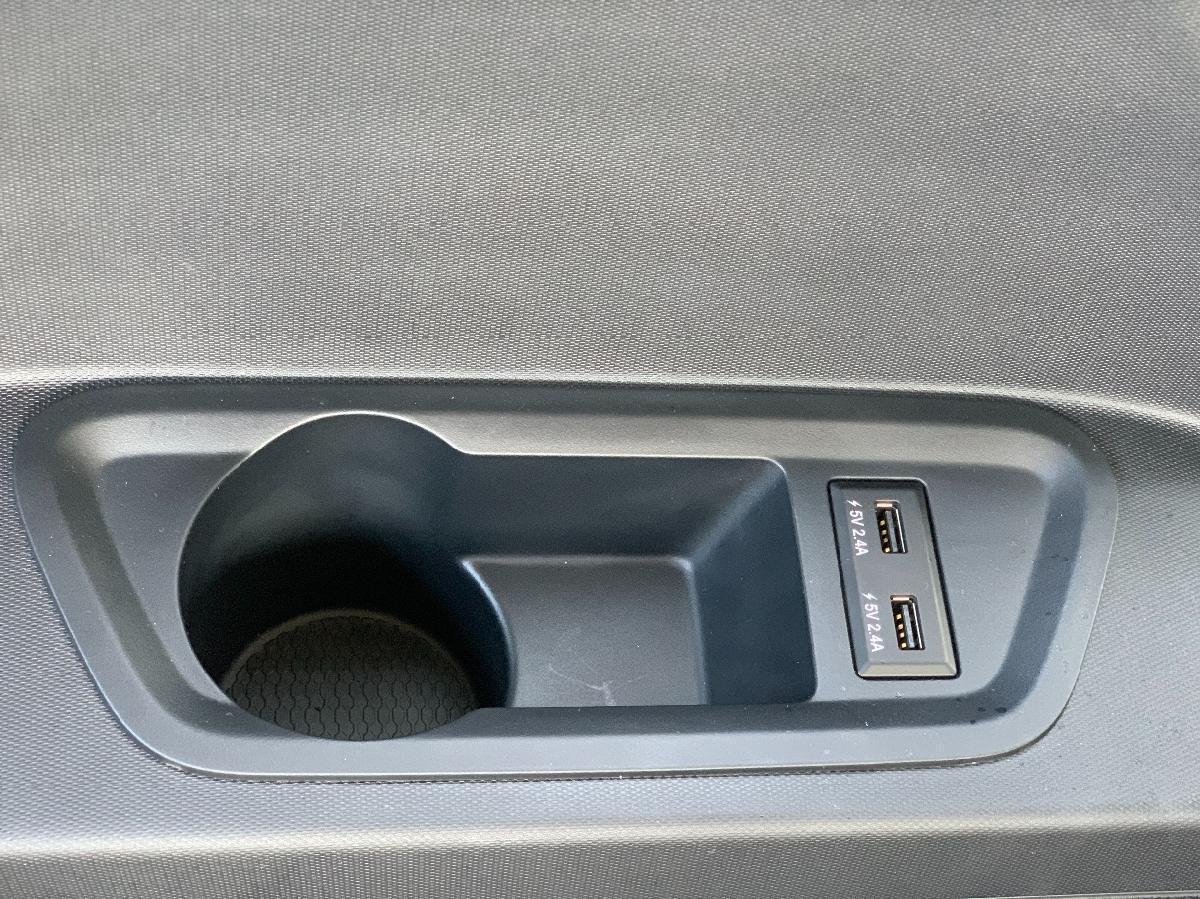 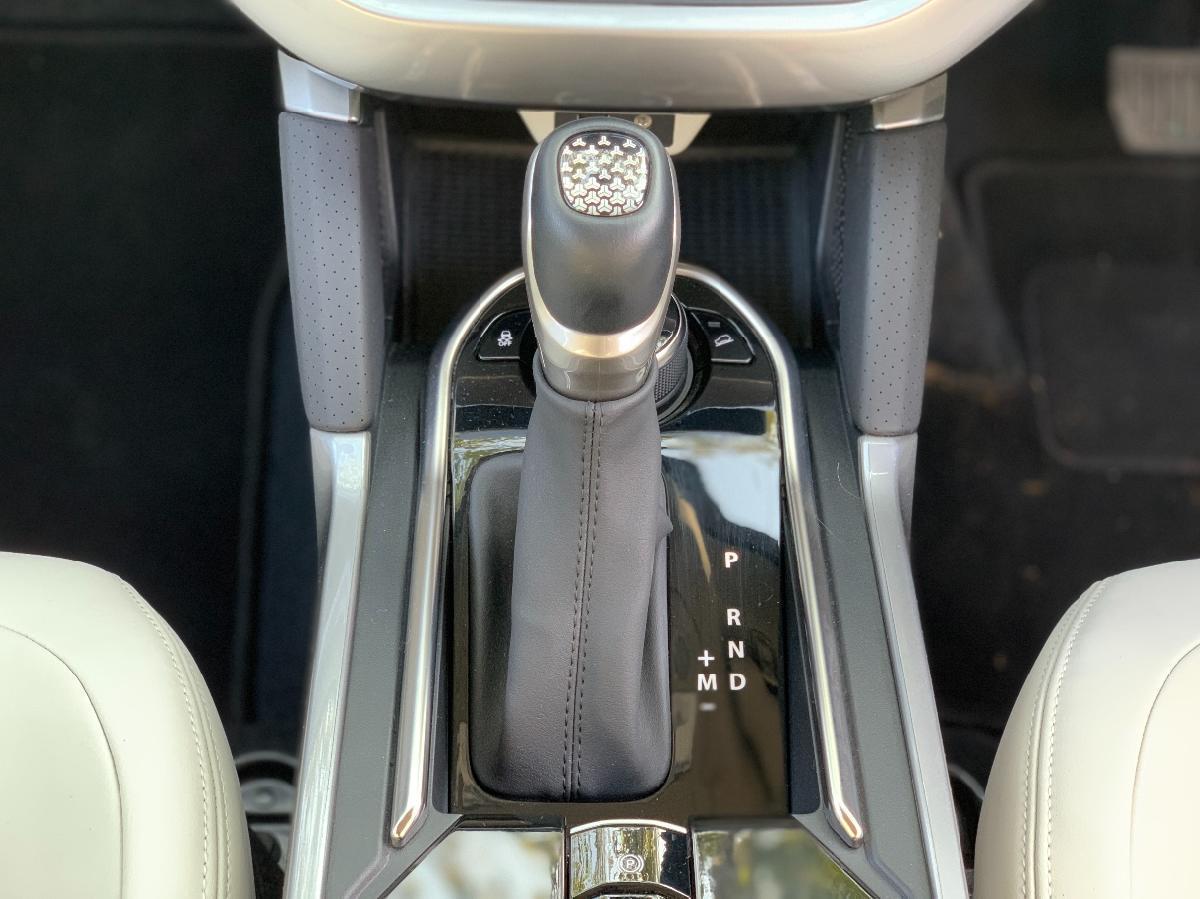 The manual gearbox, did feel a bit rough and could do with some refinement. However, having said that, make no mistake, at no point in time did we feel that the gear shifts were not precise. We were able to work them smoothly without any problems whatsoever on both the SUVs.

We did drive the new Safari in all the three modes – Eco, City and Sport mode and the difference was evident. The Sport mode, as always, offered the maximum excitement and we did some really high three-digit speeds in this mode. In fact, we managed to do higher speeds with the manual gearbox than with the automatic, but then, that also had to do with the fact that we got lesser traffic on the highway. However, before hitting the highway, we also did get a chance to activate the ESP Terrain Response Mode and drive the new Safari for a bit in the Rough terrain mode and we weren’t disappointed. (There’s also Normal and Wet mode.) The new Safari gets disc brakes on all four wheels that perform admirably well. While on the topic of brakes – the new Safari gets an Electronic Parking Brake with Auto Hold which is quite cool and looks elegant, instead of the brake lever that most SUVs come with. 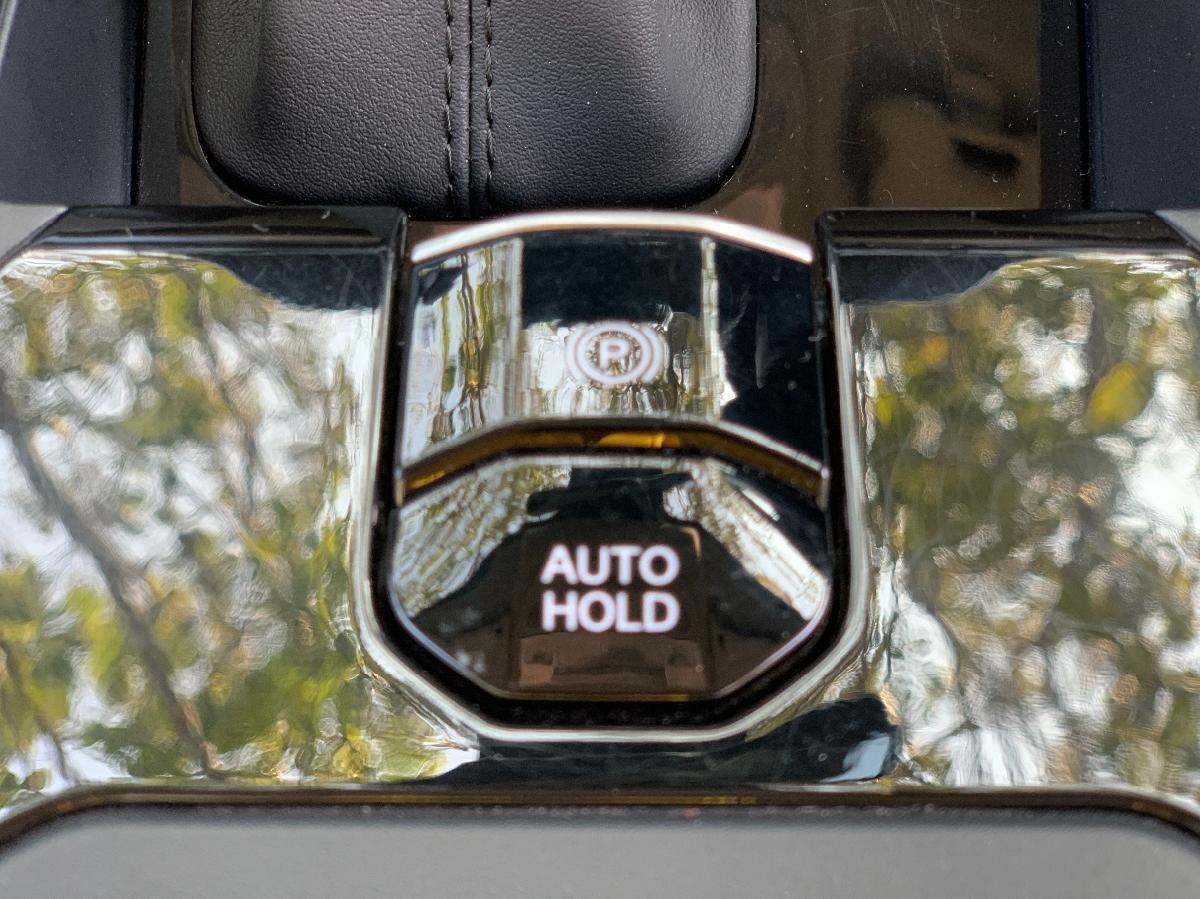 The best part about driving the new Safari, we noticed, was – barely any body roll. The monocoque chassis, allowed for better handling and performance, making the new Safari really quite agile. And this, despite the fact that the new Safari is now 70 kgs heavier than its predecessor and has a kerb weight of 1825 kg. For an SUV this size, that is indeed commendable. What that translates as in the real world is extremely comfortable long journeys without any of the second and third row passengers experiencing any discomfort while still being able to keep good time. And with a 50-liter fuel tank and a 15-liter DEF (Diesel Exhaust Fluid) tank, on the new Safari, it is time to hit the road driving! 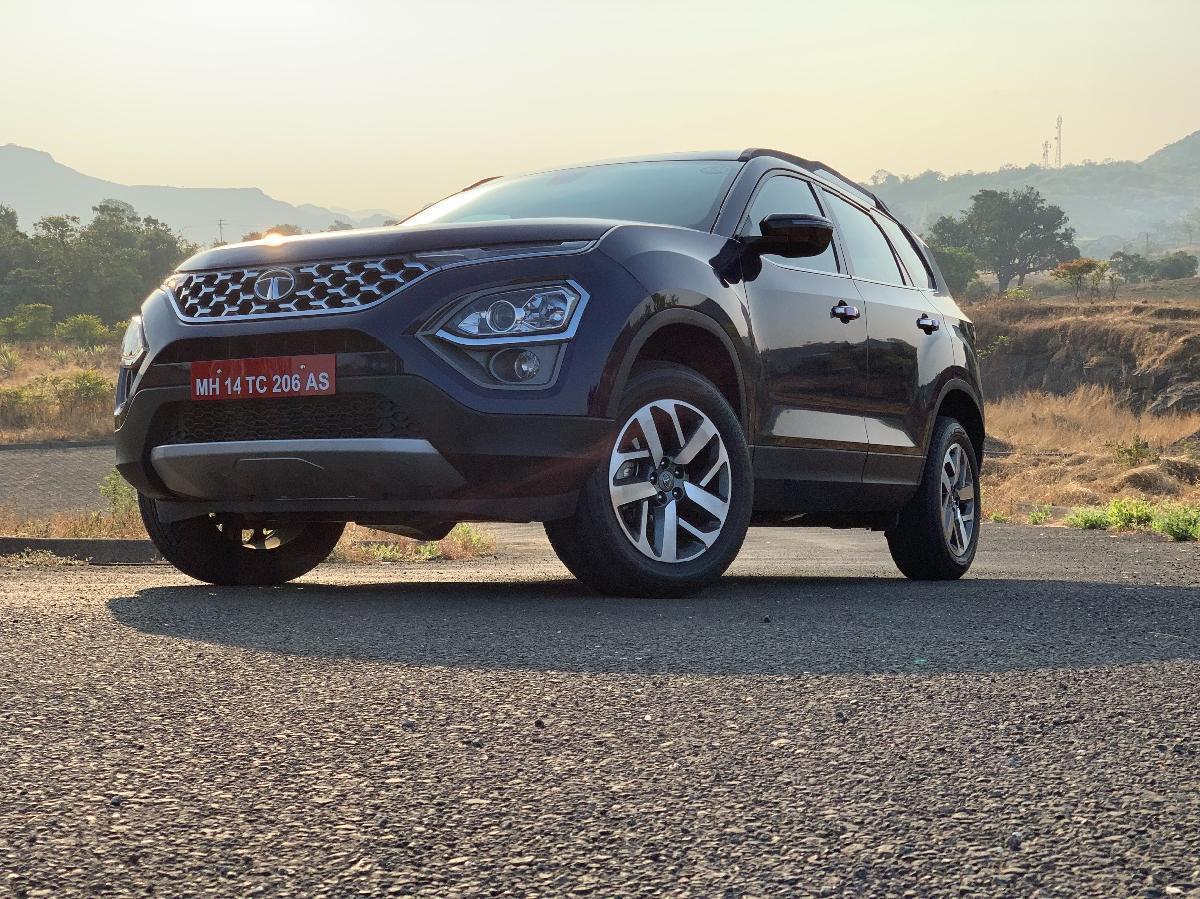 The lack of a 4X4 offering, at present, may thwart some buyers expectations, but the folks at Tata Motors reason that the number of people buying 4X4s in India is a very small one, and that if there is a demand for it, they will certainly be able to manufacture and deliver it soon enough. 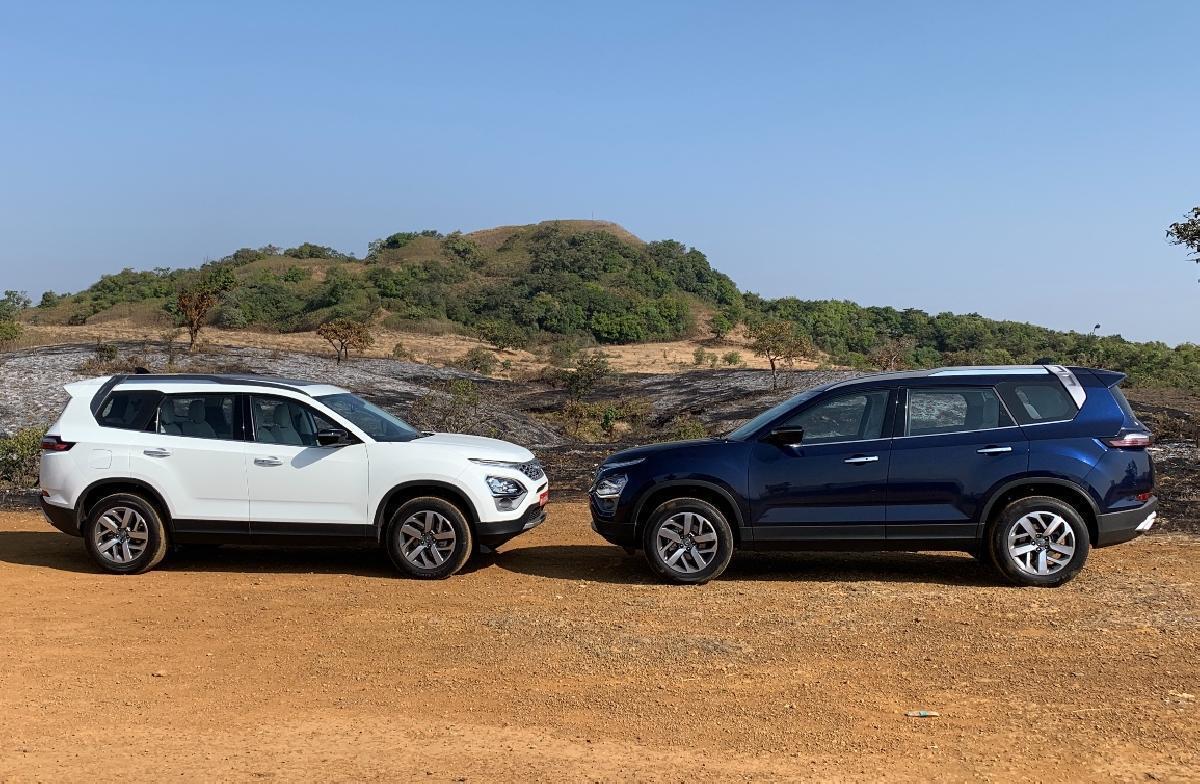 The new Safari has good road presence and is a robust SUV that packs in power and performance. Not to mention pride of ownership – it is a ‘Made in India’ product, afterall. With a contemporary design, large enough seating capacity, and great driving pleasure, a lot of people will be flocking back to the new Safari. The prices haven’t been announced yet, but since it is a product from Tata Motors’ stables, rest assured that the new Safari will be reasonably priced. So, if you’re shopping for a six-seven seater SUV, test driving the new Safari at your nearest Tata Motors dealership should definitely be on your ‘To-Do’ list. With all the advanced features, oodles of space, and great driving dynamics, it won’t be long before you’ll be convinced to book yours.