The government's vehicle scrappage policy aims to help open more doors for the the auto sector by generating demand over the long term while contributing towards cleaner air and creating more job opportunities.

Close to two months after Union finance minister, Nirmala Sitharaman announced the Vehicle Scrappage policy, the government has now spelt out the broad framework of the policy. Making a suo moto statement in parliament, the Union Minister of Road Transport & Highways (MoRTH),  Nitin Gadkari, said his ministry would be introducing the Voluntary Vehicle-Fleet Modernization Program or “Vehicle Scrappage Policy”  which is aimed at creating an ecosystem for phasing out  unfit and polluting Vehicles.

The objectives of the policy, Gadkari said are aimed at reducing the number of old and defective vehicles, cutting vehicular air pollution that will enable India to fulfil its climate commitments, improving road and vehicular safety, achieving better fuel efficiency, and formalising an existing and informal vehicle scrapping industry. Gadkari’s statement in parliament indicated that a draft will be put out to solicit suggestions of the public.

It will also enhance availability of low-cost raw materials for automotive, steel and electronics industry, the statement said. The ecosystem is expected to attract additional investments of around INR 10,000 crore and 35,000 job opportunities.

It has been announced that the criteria for a vehicle to be scrapped is primarily based on the fitness of vehicles through the Automated Fitness Centres in case of commercial vehicles and Non-Renewal of Registration in case of private vehicles. The criteria has been adapted from international best practices after a comparative study of similar norms in countries such as Germany, UK, USA and Japan.

The policy suggests that a vehicle failing the fitness test or failing to get a renewal of its registration certificate may be declared as End-of-Life Vehicle. Criteria to determine vehicle fitness will be primarily based on emission tests, braking, safety equipment among many other tests which are as per the Central Motor Vehicle Rules, 1989.

Nagesh Basavanhalli, Group CEO & MD, Greaves Cotton said, "We welcome the announcement made by the Ministry on vehicle scrapping policy. This incentive-led announcement will lead to reduction in the pollution levels in the long run and boost the demand for new and environment-friendly vehicles especially in the personal mobility segment.

It has also been proposed that commercial vehicles (CV) be de-registered after 15 years in case they do not pass a fitness test; as a disincentive, increased fees for fitness certificate and fitness test may be applicable for CVs 15 year onwards from the date of initial registration.

The MoRTH will promote the establishment of a Registered Vehicle Scrapping Facility (RVSF) across the country and encourage both public-private participation, as also an Integrated Scrapping Facility where a variety of scrappage technologies can be synergized together.

With a simplified registration process via a single window mechanism, the scrapping facility will have to comply with prevailing environmental and pollution norms, and law, the statement said. Furthermore, the scrapping centres are to also have adequate parking facility, de-pollution equipment for air, water and sound pollution and facilities for hazardous waste management and disposal.

In his initial reactions, FADA president, Vinkesh Gulati said, “ The guidelines and advice are in the right direction. Now state governments and OEMs have to do their part to make it a success. The incentives will help to excite the customer and motivate him to scrap his old vehicle. It will also revive the CV segment and boost the exchequer’s revenue on new vehicle sales.”

The ministry shall promote the establishment of Automated Fitness Centres on a PPP model by state government, private sector and automobile companies etc,. These centres will have space for test-lanes, IT servers, parking and free movement of vehicles. To avoid conflict of interest, operators of fitness centres shall only provide testing facility and shall not provide repair/sale of spare services. The appointment for fitness centres will be facilitated online and tests reports shall also be generated electronically. 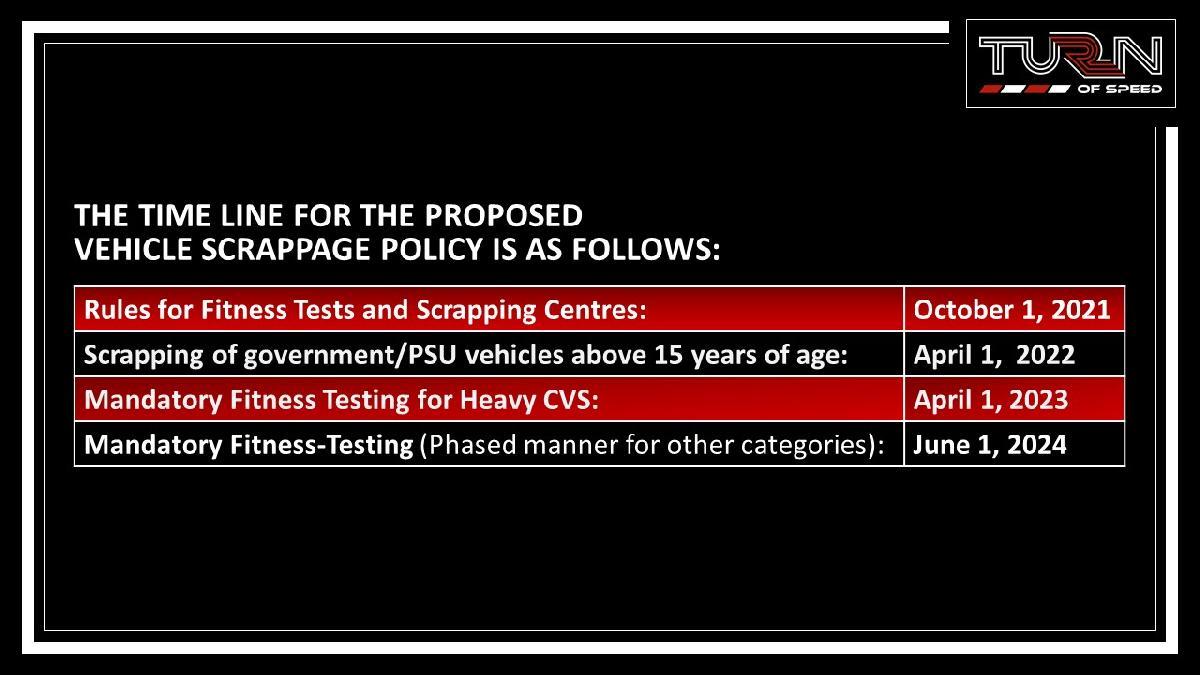 Though the policy intention – first announced during this year’s budget – has been welcomed, the real effect will be seen after the fitness and recycling centres are up and running, and that may well take up to three years.

Afterall, India has 5.1 million LMVs (Light Motor Vehicles) that are over 20 years old and 3.4 million vehicles that are older than 15 years. Around 1.7 million commercial vehicles are over 15 years old and without a valid fitness certificate.

Also, you may remember that in 2019, Maruti Suzuki and Toyota Tsusho Group announced the setting up of a vehicle dismantling and recycling joint venture (JV), Maruti Suzuki Toyotsu India. It was to be set up at Noida in 2020-21 with a capacity to handle 2000 vehicles per month. Now, with the government’s scrappage policy announced, it remains to be seen how it actually plays out on the ground.

Nevertheless, the announcement of the scrappage policy is being perceived as positive news. Rajeev Singh, partner and automotive lead, Deloitte India says “The announcement is a good mix of both incentives for those who opt to scrap their old vehicles and an additional burden for those who continue with their old vehicles. This fine balance should help in driving old vehicles off the road. That would help reduce pollution levels and driving demand for new vehicles across all the segments.

For the industry, this policy marks a key step forward.