Over the years, Hyundai, has been working at a furious pace to raise its game even further, and its latest offering, the Alcazar, bears testimony to just that.

Hyundai Motor India Ltd’s brand-new SUV, the Alcazar, (Name inspired by castles in Spain) is here, and there is little doubt that it will make a big splash in the six and seven-seater SUV segment. Gunning for a sizeable share in the SUV space currently occupied by Tata Safari and MG Hector Plus, the Alcazar, does have quite a few neat tricks up its sleeve that are going to have many a buyer swaying towards it.

While the Alcazar, is based on the same platform as the Creta, the way it distinguishes itself from the latter is not merely through fresh interior and exterior styling but also with some tweaks to their diesel engine and with the addition of a 2.0-liter petrol engine.

In terms of exteriors, what you get is a modern SUV that looks well-proportioned and performs the function of carrying your family or business associates in utmost comfort to their desired destinations. One of the first things we noticed about the exterior styling of the Alcazar was the restraint in design, add to that an increase in the wheelbase as well as the overhangs, all of which go a long way in giving it a more grown-up look. 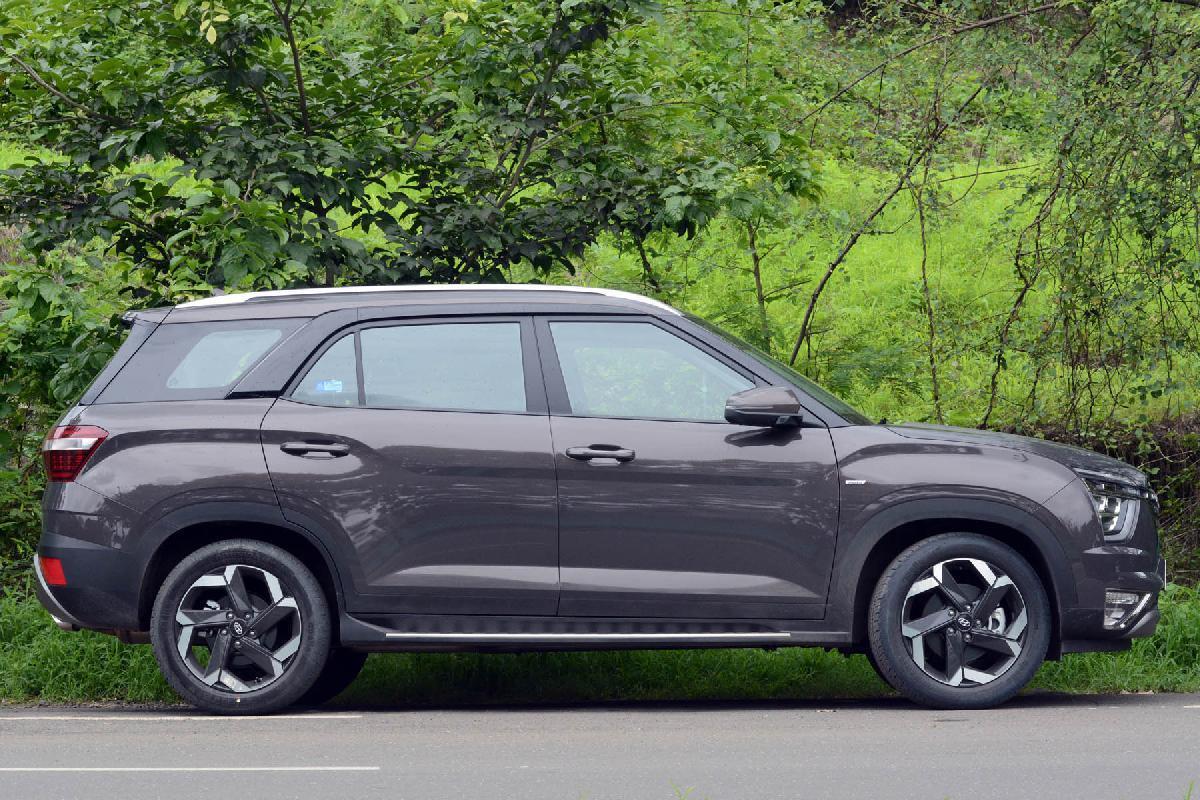 The fascia gets a beautiful matte silver skid plate but what dominates it is the stylish dark-chrome cascading grille, which really adds a great deal to the Alcazar’s looks. 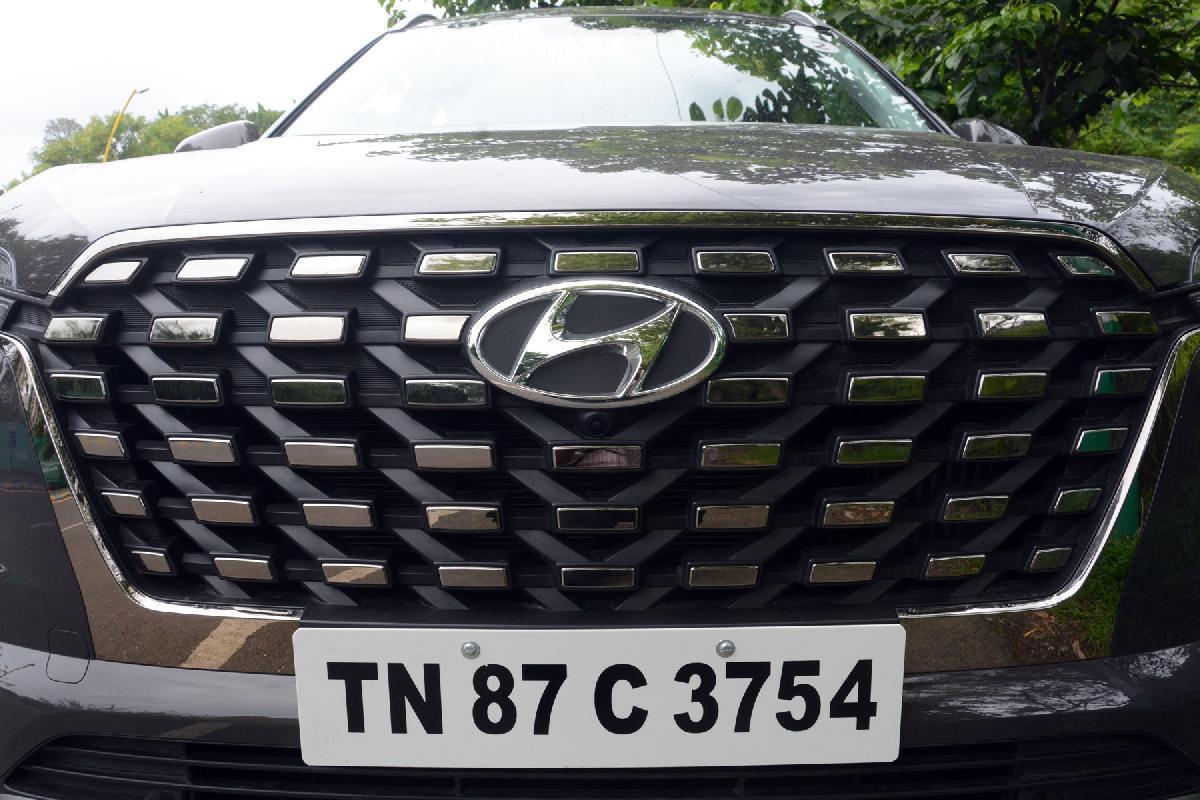 However, it is at the rear where there is a lot going on, in terms of design. From the gorgeous honey-comb design tail lamps to dark chrome badging that bear the word ‘ALCAZAR’ prominently, to the twin tip exhaust to the matte silver skid plate that has been neatly integrated into the bumper, everything comes together neatly in the well-designed Alcazar. 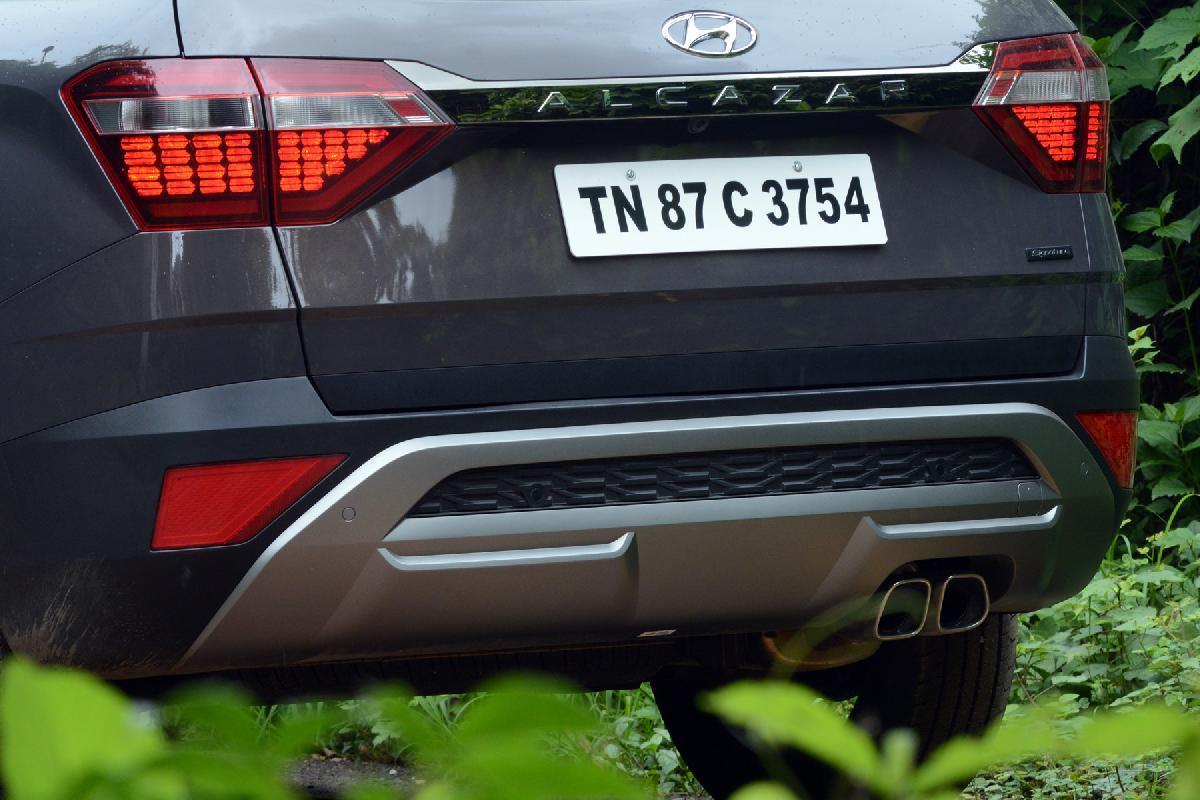 Besides this, the 18-inch diamond cut alloys, also add to the Alcazar’s overall appeal and they look even better when the Alcazar is in motion. 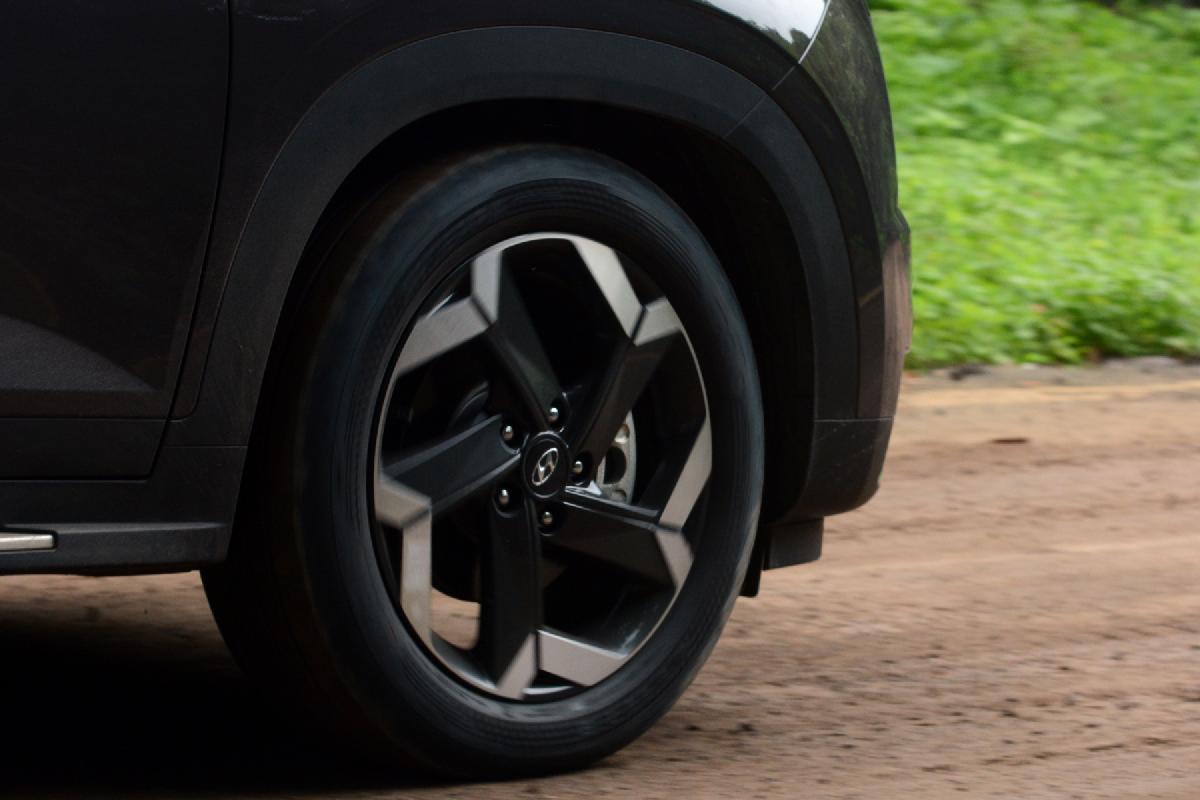 What the Alcazar also gets, besides the panoramic sunroof, or what Hyundai calls, DLO (Day Light Opening), are a body-coloured shark-fin antennae, a spoiler, and a prominent side footstep, especially useful for the third-row occupants during ingress and egress, which further add to the SUV’s looks. For those who love gazing out from the panoramic sunroof, Hyundai, has introduced the “I want to see the sky” feature, which opens up the panoramic sunroof giving you the outdoorsy feel. 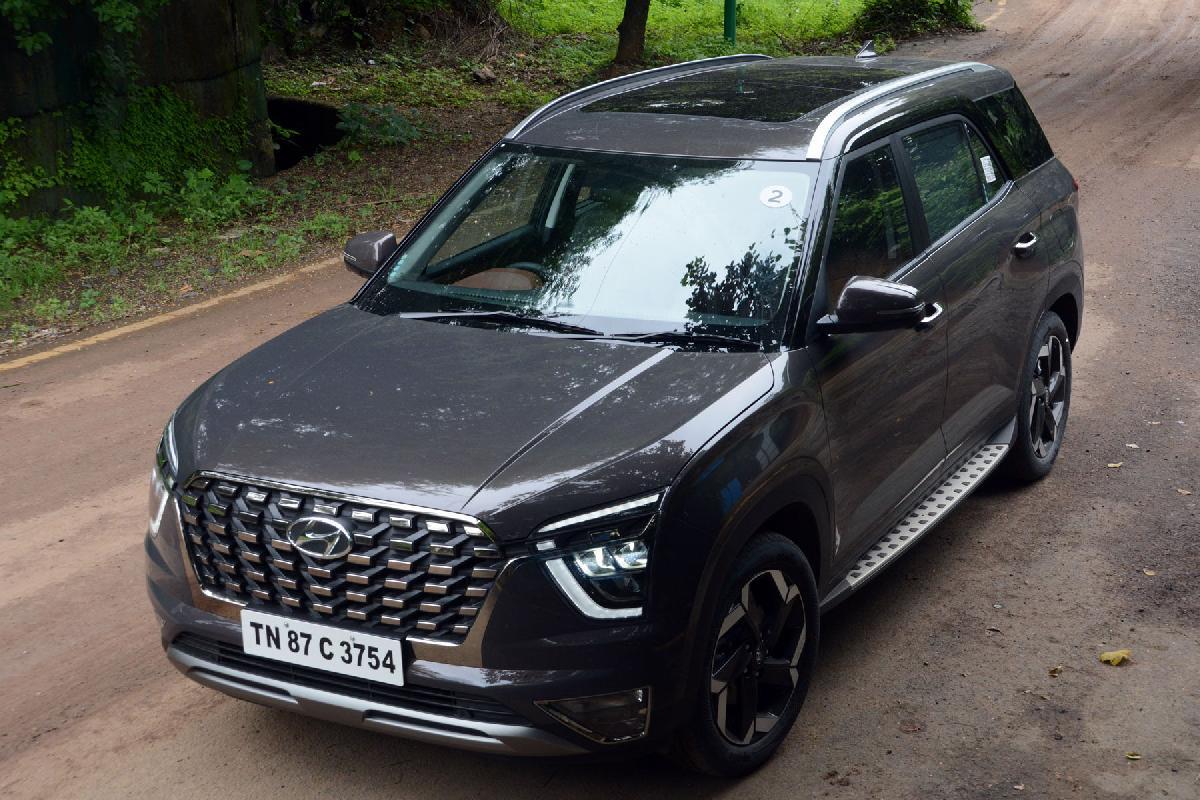 What you get inside the Alcazar besides the dual tone Cognac Brown interiors is a lot of futuristic technology including Hyundai’s famous BlueLink which can also be operated with your Smartphone. While there are a few buttons and knobs, most of them have now made way for controls on the touch screen, which happen via a 10.25 -inch one sitting prominently on the dash, encased in a beautiful piano black casing just below the air con vents. 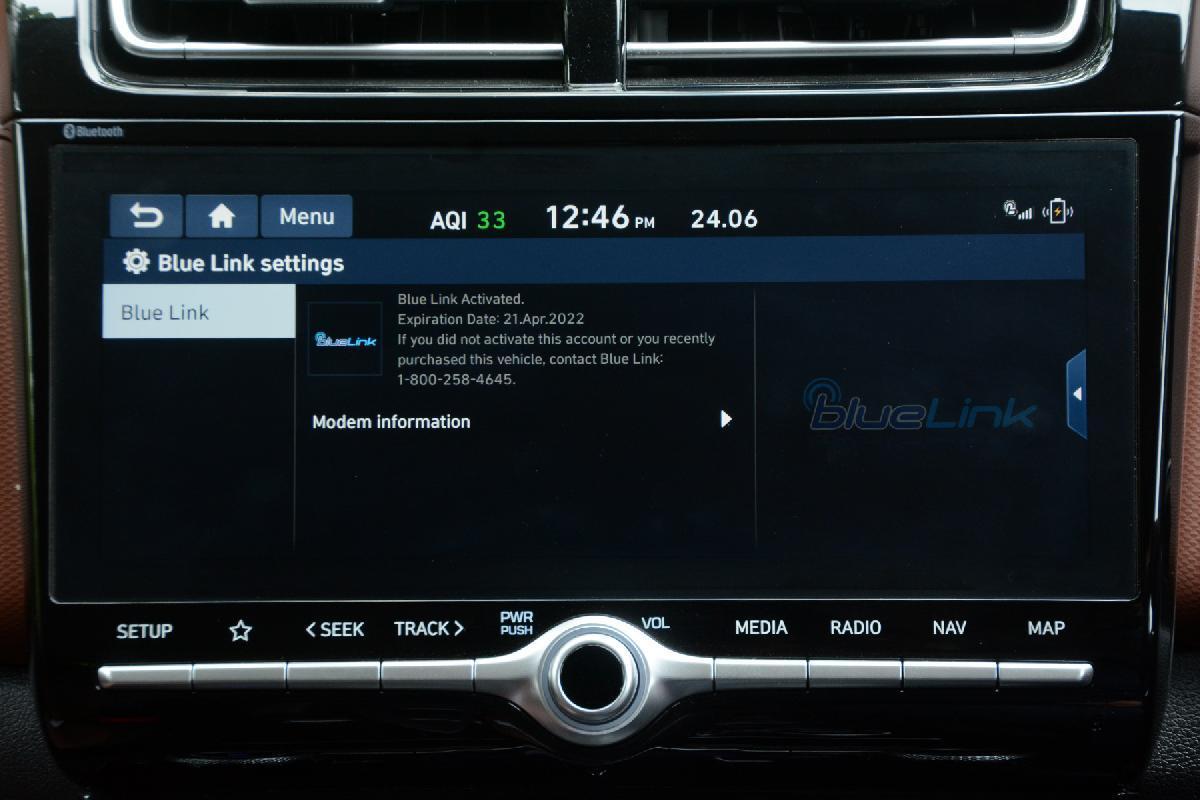 There is also a 10.25-inch multi display digital cluster that gives you all the driving-related info while even allowing you to personalize themes on it, so that you feel even more at home in the Alcazar.

The Alcazar also gets a BOSE premium sound system with 8-speakers that is bound to delight audiophiles. 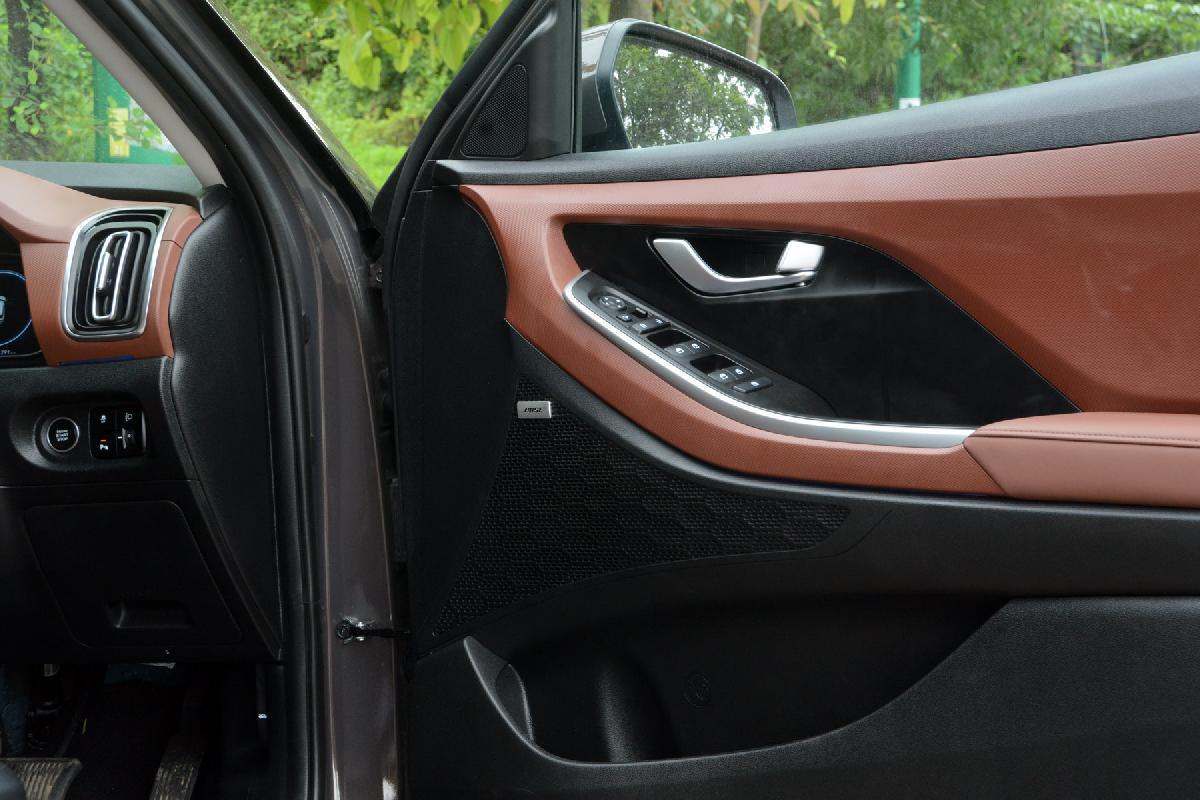 Not just that, Hyundai has gone the extra mile to ensure that you only breathe in good quality air, and so, to keep that in check, the Alcazar comes with an AQI display that ensures you live not just a grand life with the Alcazar but also a healthy one. 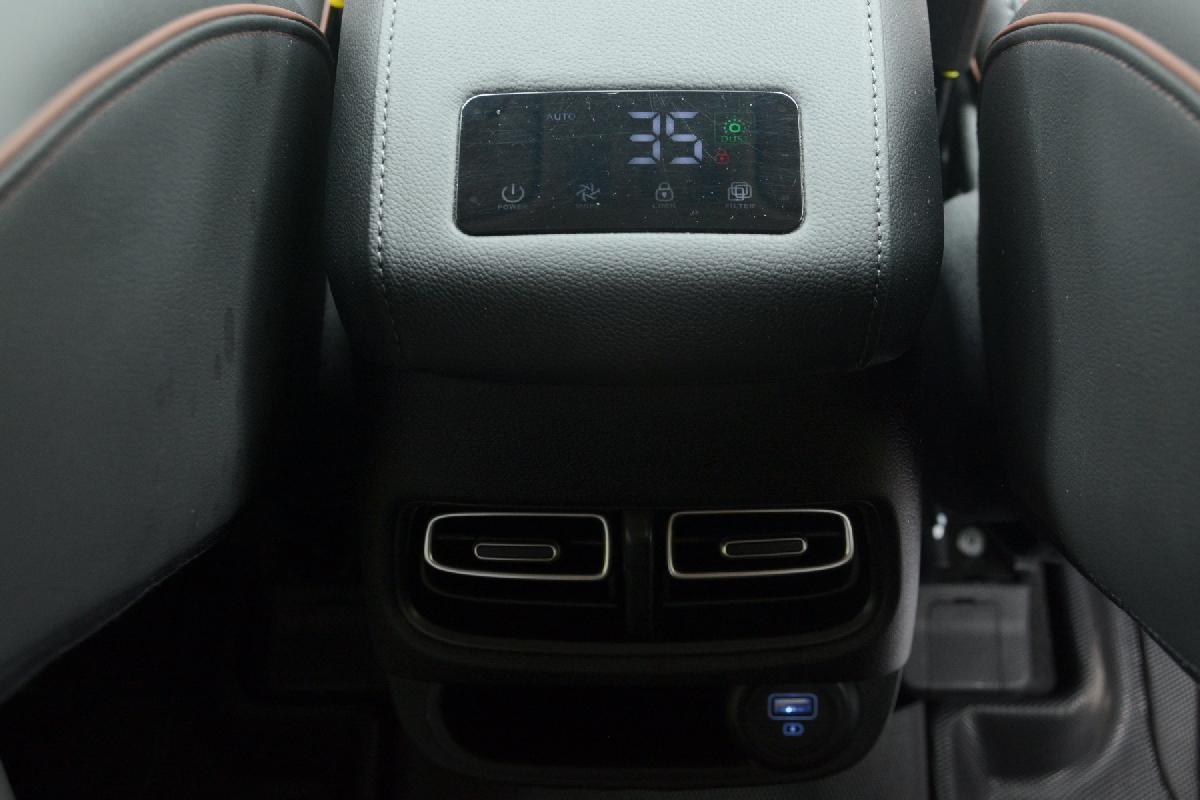 Inside the Alcazar, you are greeted with Captain seats (If you opt for them) in the second row and a premium console that houses a wireless charger and a front row seat table with a retractable cup-holder and IT device holder, so that being chauffeured around becomes an even more premium experience. 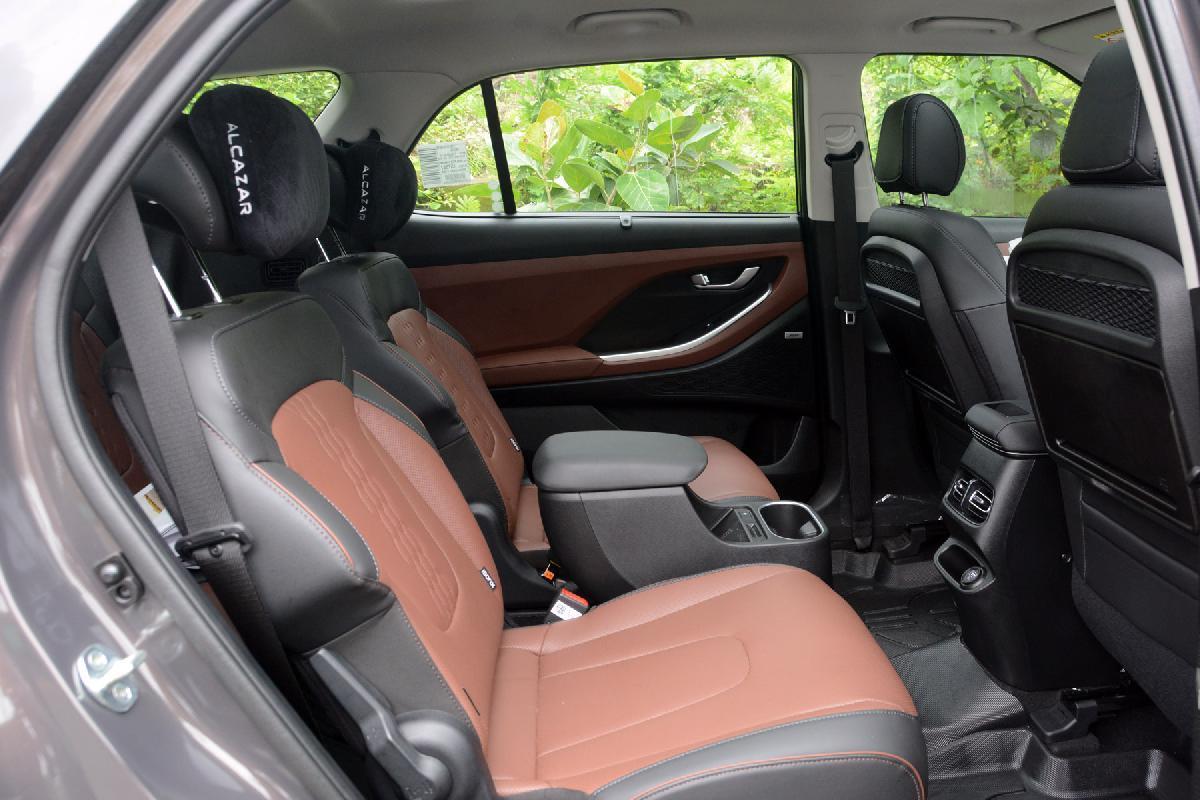 Hyundai designers have managed to create a lot of leg, head and shoulder room inside the Alcazar and so you can rest assured that you are never going to be jostling for space with other occupants. However, the third row, the access to which comes with a neat tip and tumble second row seat operation, is a bit of a squeeze with low seating, and hence best suited for kids or lanky teens. But even third row occupants get USB ports, air con vents with 3-stage speed control and a seat reclining feature which can make things more comfortable. 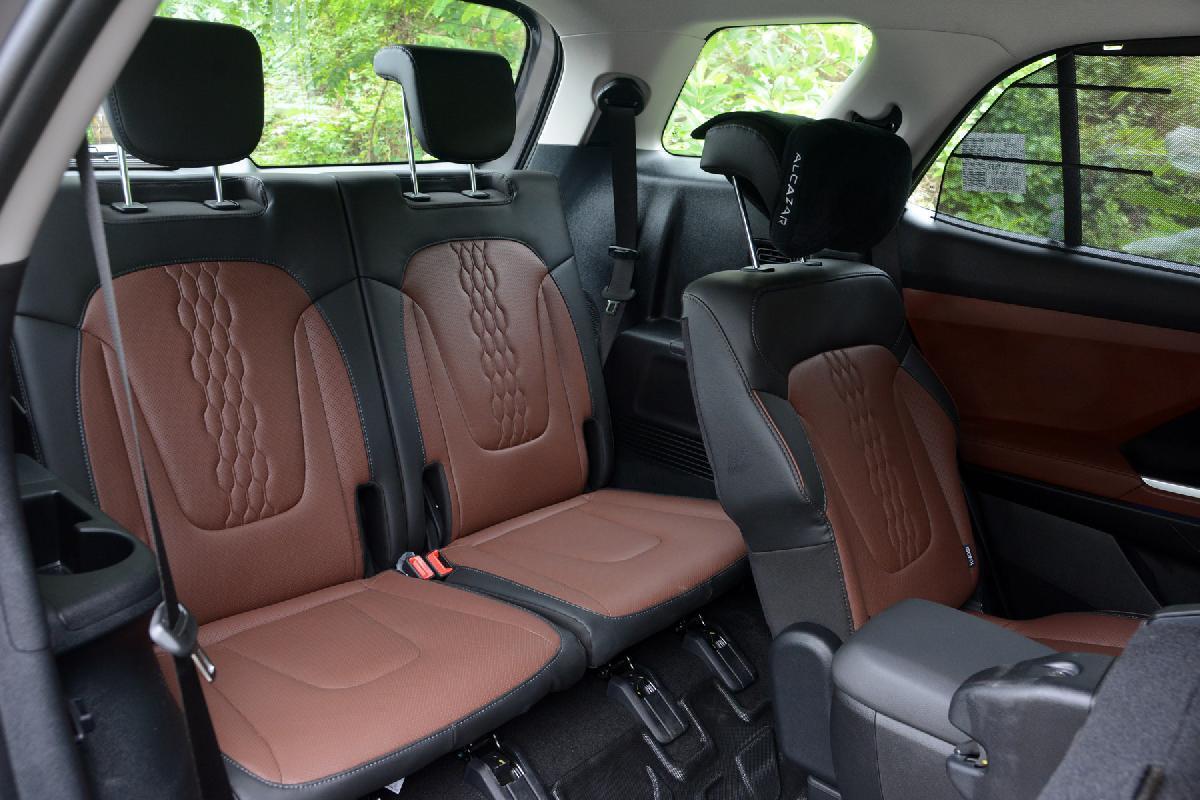 The Alcazar also gets plenty of boot space and with a variety of seating configurations, you can free up additional room, should you require to carry more luggage with you conveniently shifting from Explorer mode to Beach mode to Adventure mode or Camping mode. 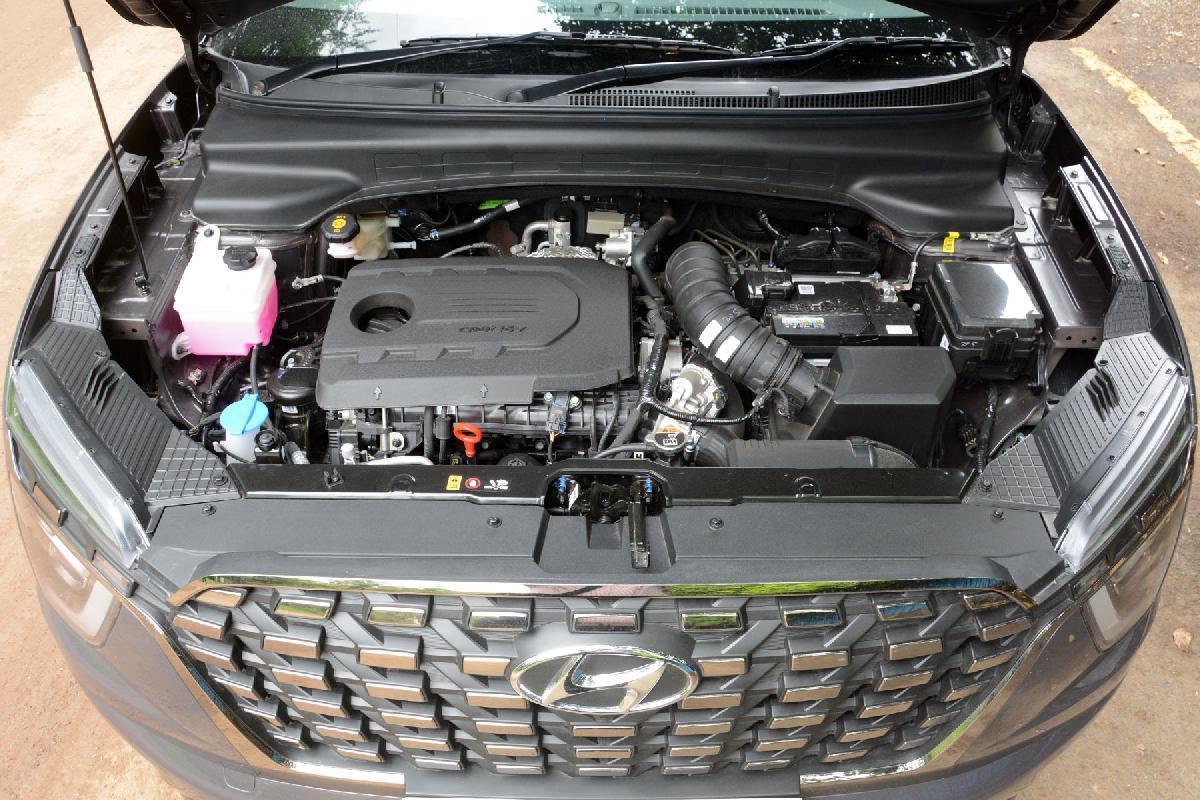 We got behind the wheel of the torquier diesel which was mated to the 6-speed automatic gearbox and immediately made ourselves comfortable on the ventilated seats. A voice with a welcome greeting sounds when you get inside the Alcazar which can be deactivated, if you don’t care to be greeted while entering your SUV. The flat-bottom steering is precise and a breeze to handle. 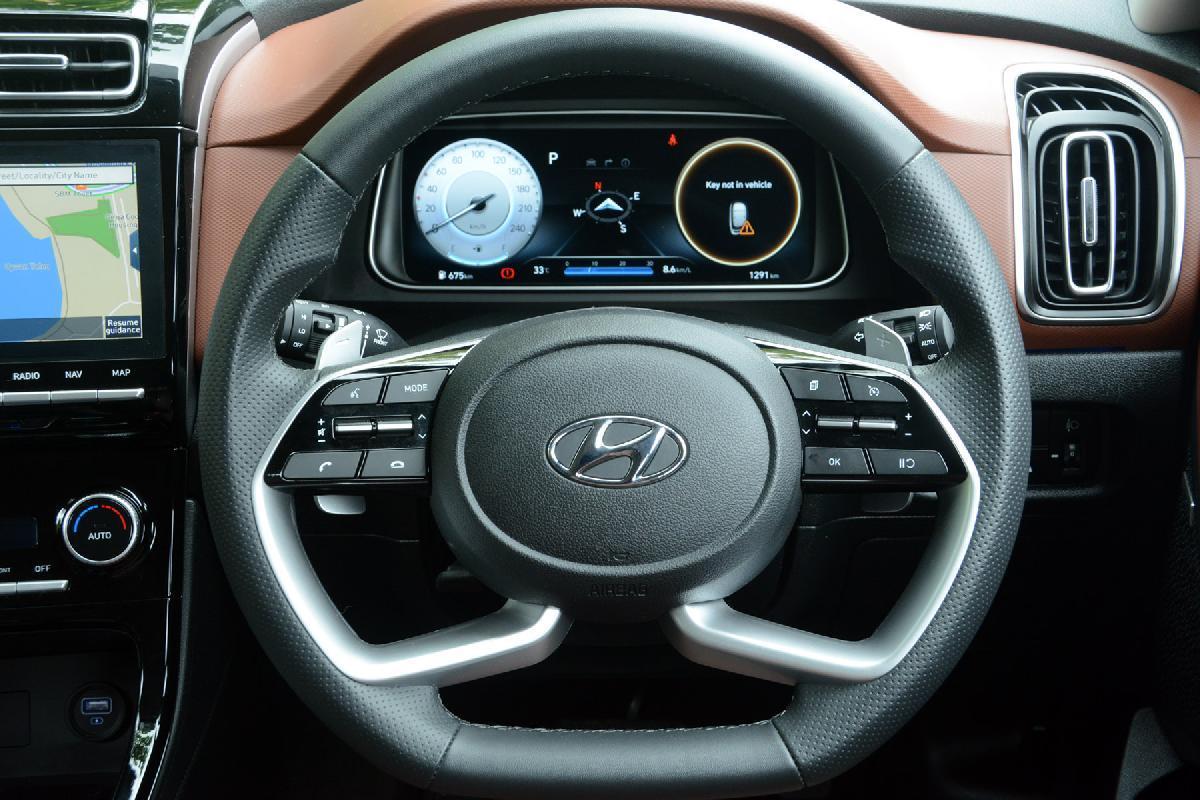 The door pad on the driver’s side which gets ergonomically designed switches is really conveniently located from the steering and you don’t really have to reach out and fumble for any switches while driving and that truly is very handy. We really liked the angle at which it has been mounted within the Alcazar. 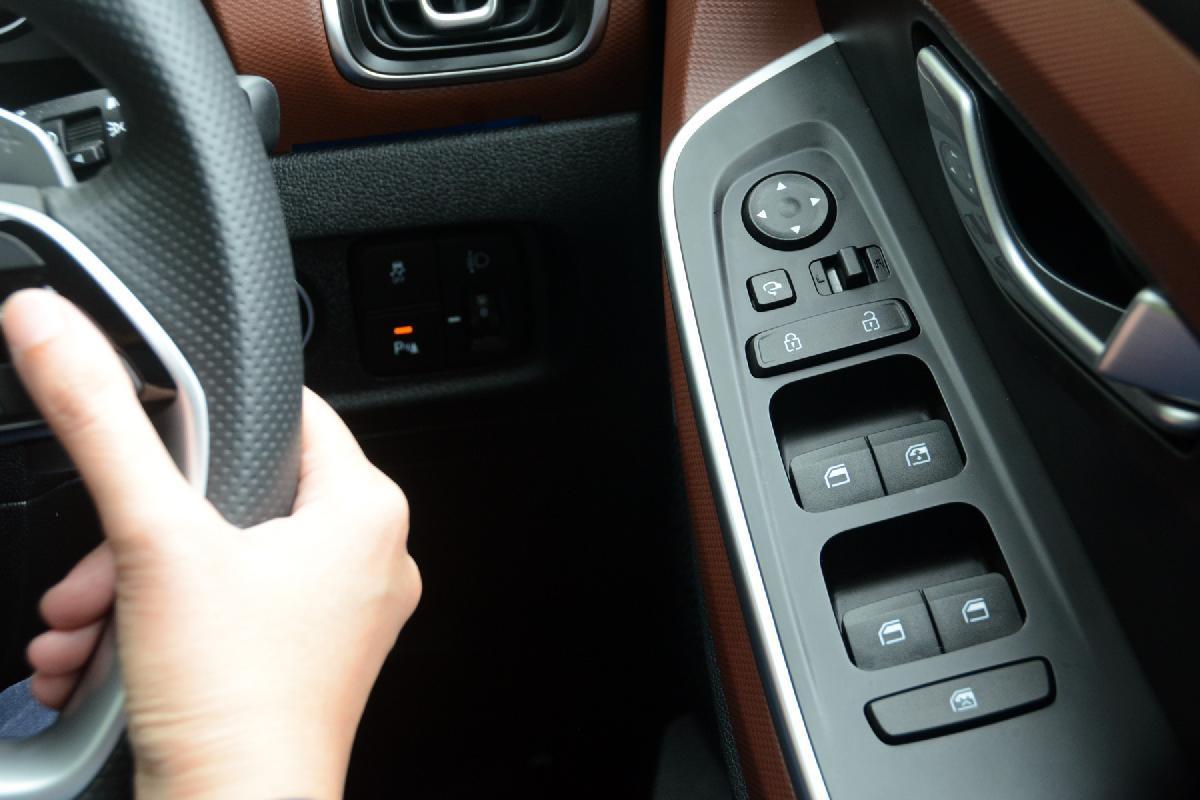 The gearshift which gets perforated leather is a delight to hold and shift into other gears such as ‘S’ for instance. In fact, it is a well thought out upgrade from the conventional gearshifts around and with its smooth operations, it is easy to tell that this is a really slick gearbox where you can barely feel the gearshifts. 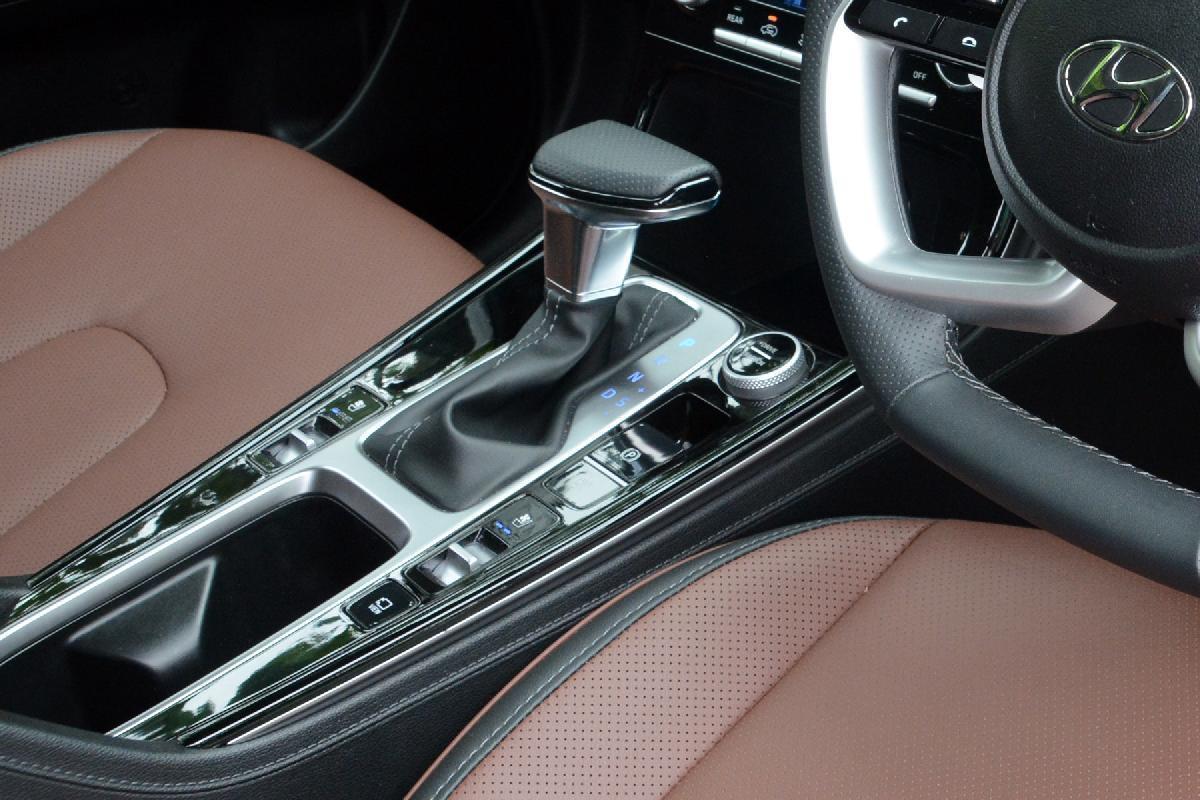 You can choose to drive in the COMFORT, ECO or SPORTS mode and the display changes according to the choice you make. Shifting into the Sport mode really unleashed the full potential of the diesel Alcazar and it was sheer joy handling this nimble SUV. 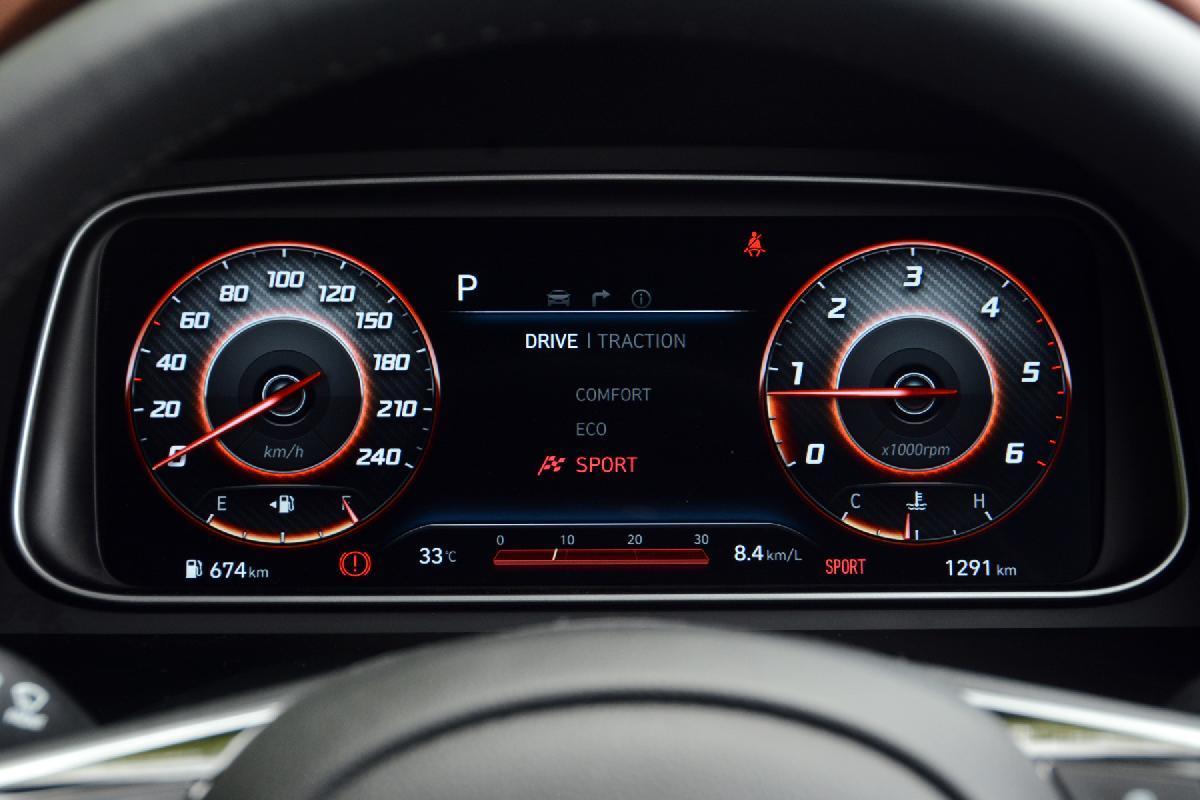 The first thing you notice is that the Alcazar performs brilliantly even at low speeds and pulling is just effortless thanks to the bettering of the first gear ratio vis-à-vis the Creta. Even the final gear ratio has been increased and that’s what gives the Alcazar it’s impressive performance. Not to mention its 5.6m turning radius, which isn’t bad for a 4500m long SUV, but which we city dwellers always want bettered on most vehicles thereby allowing for even more ease during turning maneuvers on our narrow roads. What’s more, there’s also the option of paddle-shifters, should you want to indulge in a more engaging driving experience. Overall, the Alcazar feels nimble and light and is quite a lot of fun even while overtaking on our highways. Not once did we feel the bulk often associated with six and seven-seater SUVs and that is a big reason that should see the Alcazar being hugely successful in India. 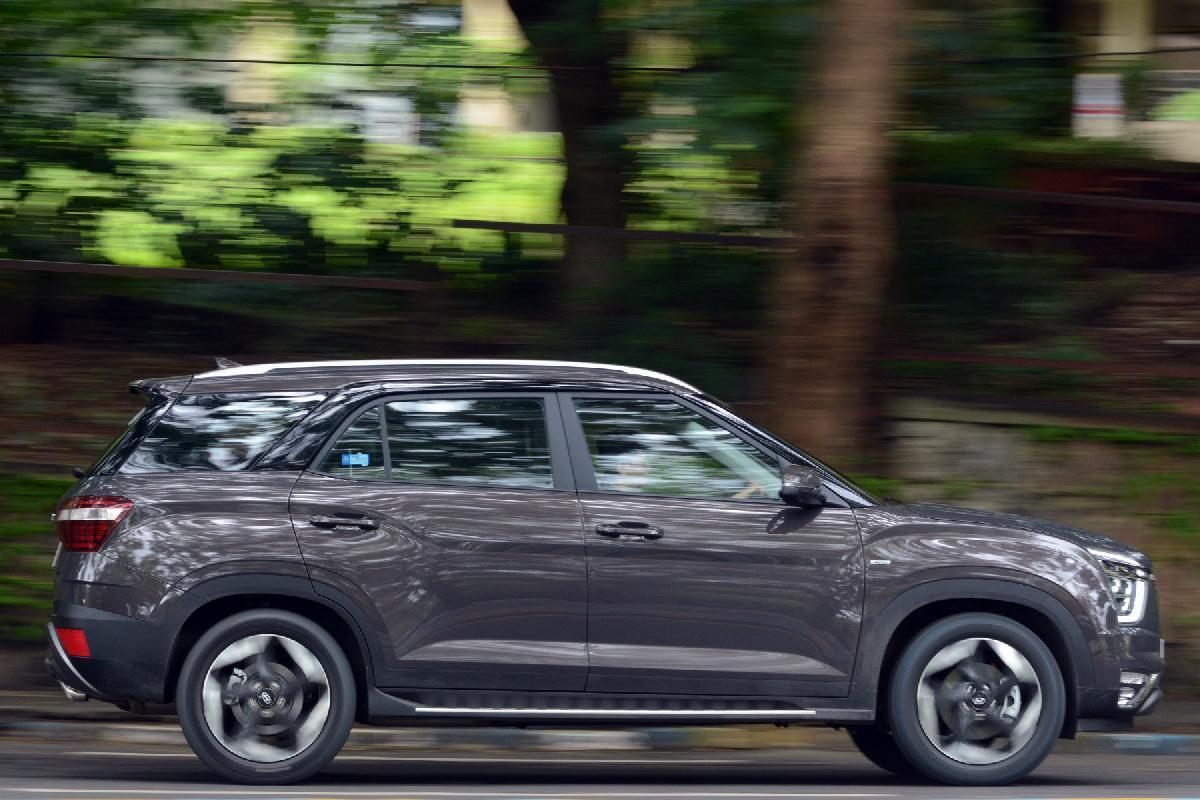 In terms of safety, the Alcazar uses 75.6% of advanced and high strength steel which plays a big role in reducing the weight and improving the fuel efficiency. Besides the six airbags, the Alcazar also gets an added ring structure around its shell which is aimed at keeping occupants safe in the unfortunate event of a crash. Besides, there are some other toys such as  BVM (Blind View Monitor) and SVM (Surround View Monitor). 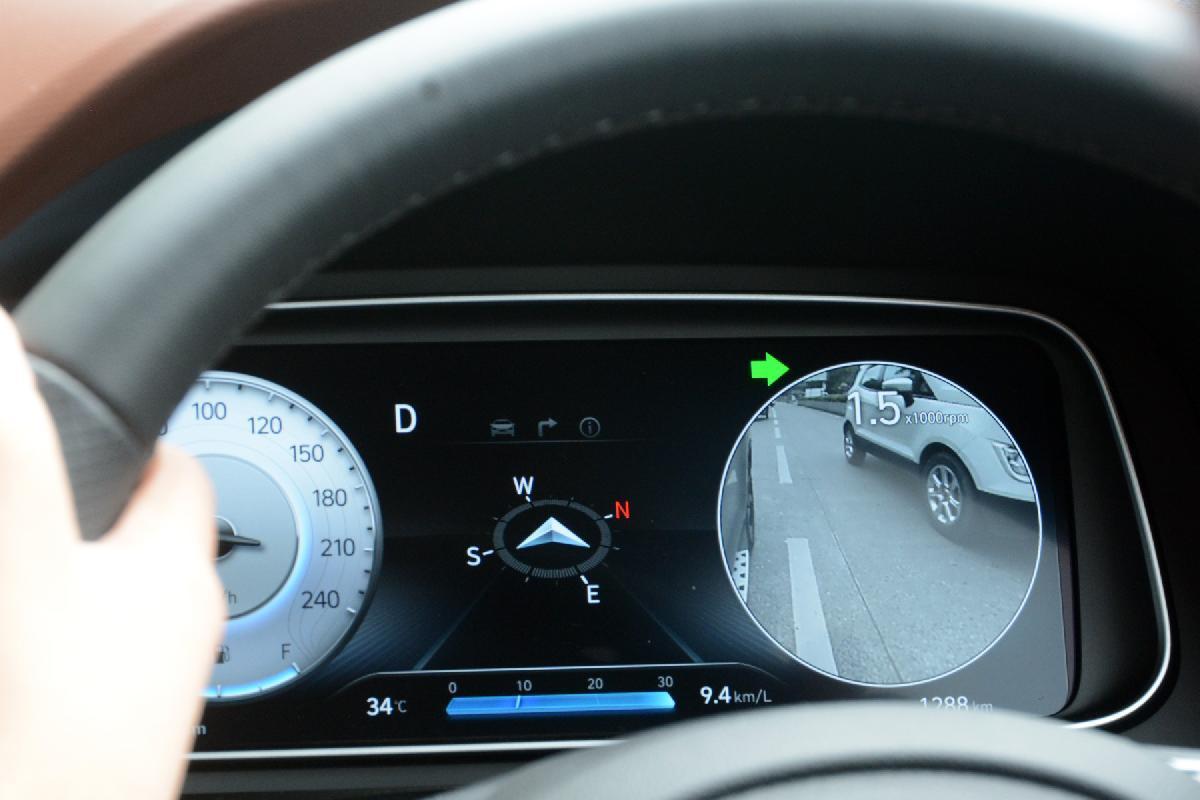 Both extremely helpful technologies that help reveal who may be driving in your blind spot without you having to look into your ORVM or crane your neck to look out – a feature that your digital cluster will display – when you turn on the left or right turn indicators and also when you want to get a bird’s eye view of your vehicle to ensure that no obstacles are in the way especially before you reverse or get out of your parking, ensuring that your path is clear. This technology is especially helpful in ensuring that you are safe at all times and also in avoiding mishaps of all kinds. 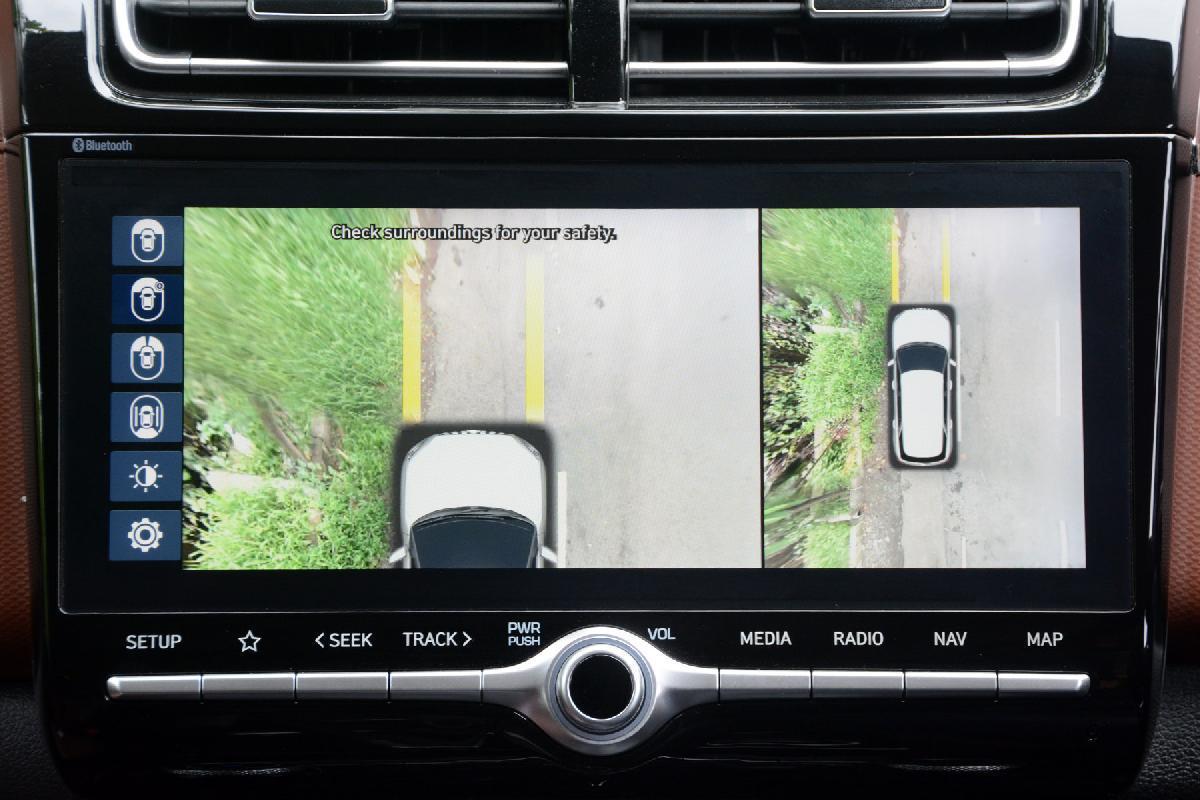 The Hyundai Alcazar sure ticks all the boxes especially when it comes to advanced technology, interior space and performance and if you’re in the market for a six or seven- seater SUV, it would do you good, to check out the latest offering from Hyundai’s stables which is available in three trims, Prestige, Platinum and Signature, in six single tone and two dual tone options with a five-year warranty, eight year-OTA Map updates, and a three-year BlueLink subscription plan. Starting at INR 16,30,300, the Hyundai Alcazar is a trendy SUV, rest assured, it will get the job done.