The Skoda Rapid TSI is so Jekyll and Hyde that even Robert Louis Stevenson wouldn't disagree.

Who would look at the Skoda Rapid TSI and think that this sedate looking car is in fact capable of unleashing such exhilarating fun and that too with what seems like a feeble engine, at least on paper. So very Jeckyll and Hyde.  Boy, was I in for a delightful surprise!

On the outside, not much has changed for the Rapid which was introduced back in 2011 and consequently updated in 2017 and in 2019 to keep up with competition. (Think Maruti Suzuki Ciaz, Hyundai Verna, Toyota Yaris and the Honda City.) All of Skoda’s characteristic design elements remain, whether it is the ageless design, or the family resemblance, best seen through their quintessential grille with vertical slats. There’s no mistaking this car from the Skoda family even from a distance. 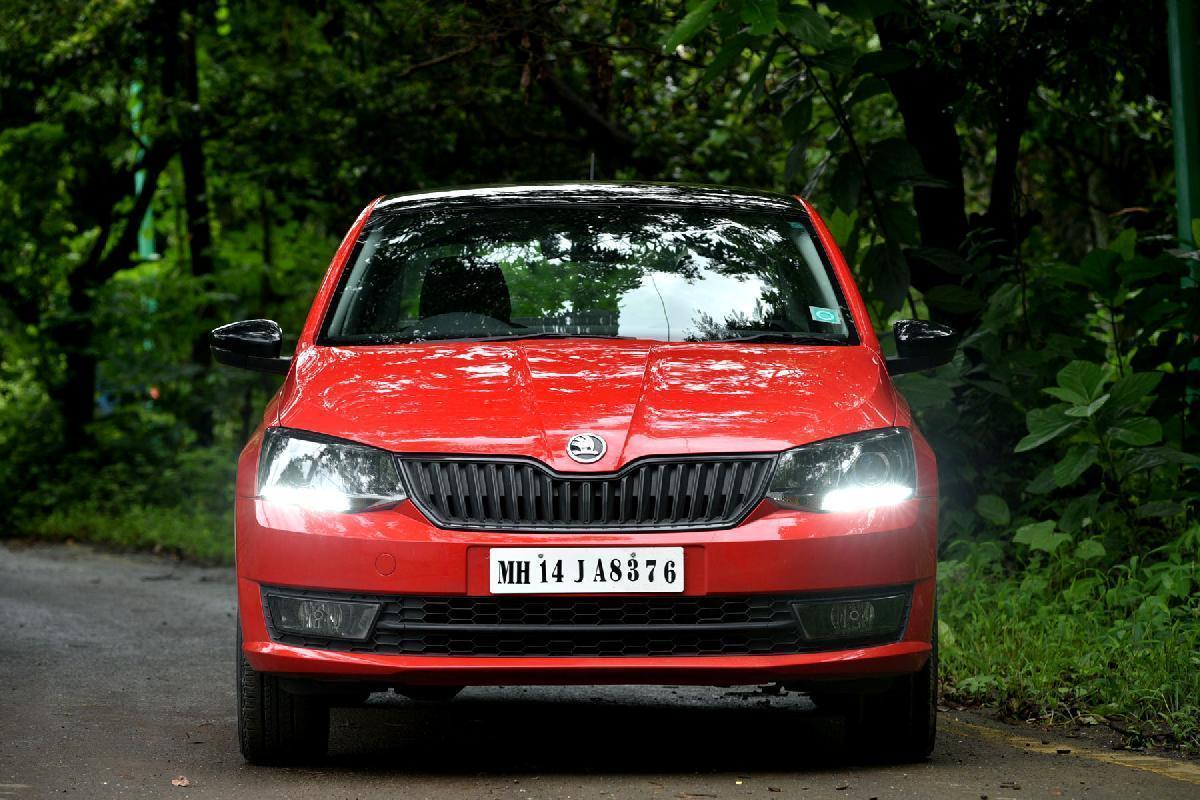 The new Monte Carlo edition that I drove in Monte Carlo Red came with the Monte Carlo badge on the car’s B-Pillars. Besides, the car also had glossy black ORVMs, a resplendent black tailgate spoiler, a black painted roof (not a sunroof), and 16-inch, dual tone Clubber alloys – all of which distinguished this edition from the other five variants on offer. The Rapid’s quartz cut projector headlamps also blend well with the car’s distinct look. 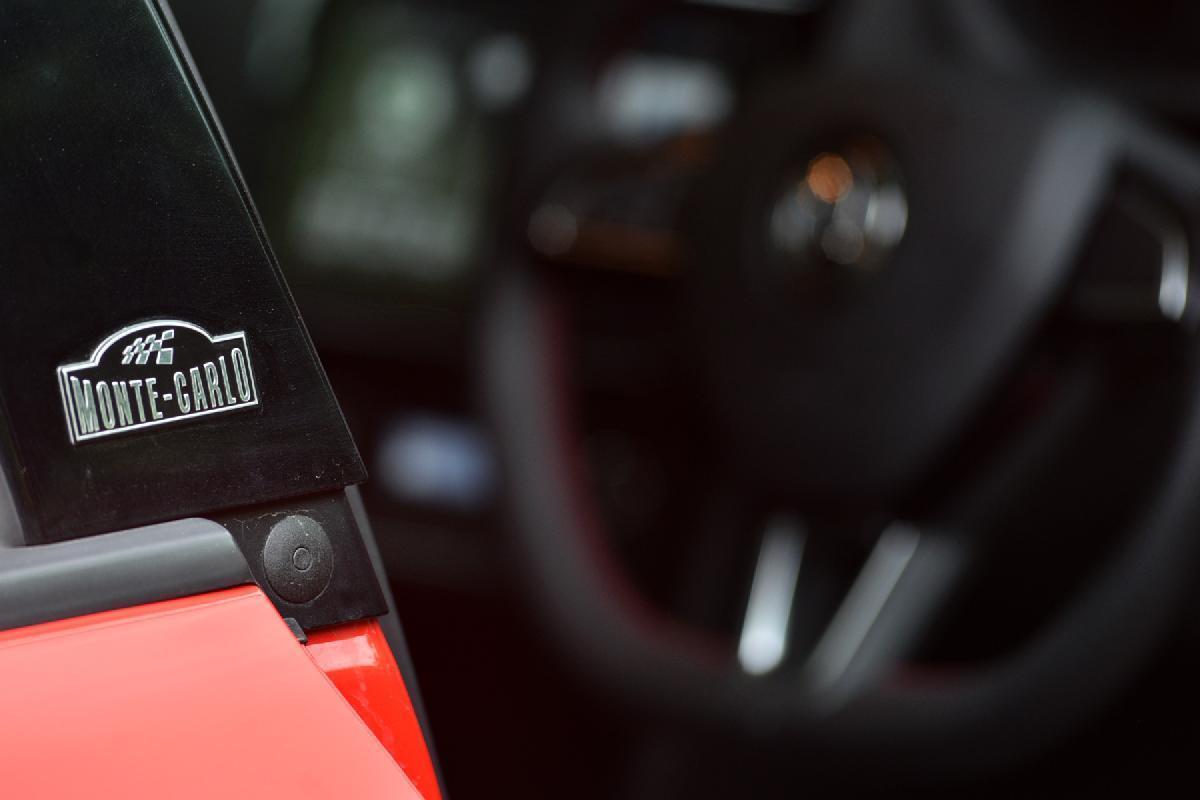 Inside the cabin, the Rapid gets a dark grey dashboard with a splash of colour thanks to the stripes on the leatherette upholstery that the Monte Carlo edition gets in order to give the car a racy look. However, Skoda could have done better in the upholstery department. Remember how Skoda had wowed everyone with beige coloured interiors on the Laura back in 2006? That was truly a departure from the norm. An 8.0-inch touchscreen infotainment system with Android compatibility, a rearview camera, a cooled glove box compartment with USB and AUX located inside it, and a 12V power socket in the front console for all your portable devices or maybe even a vacuum cleaner are other useful features that you will find inside the Rapid. 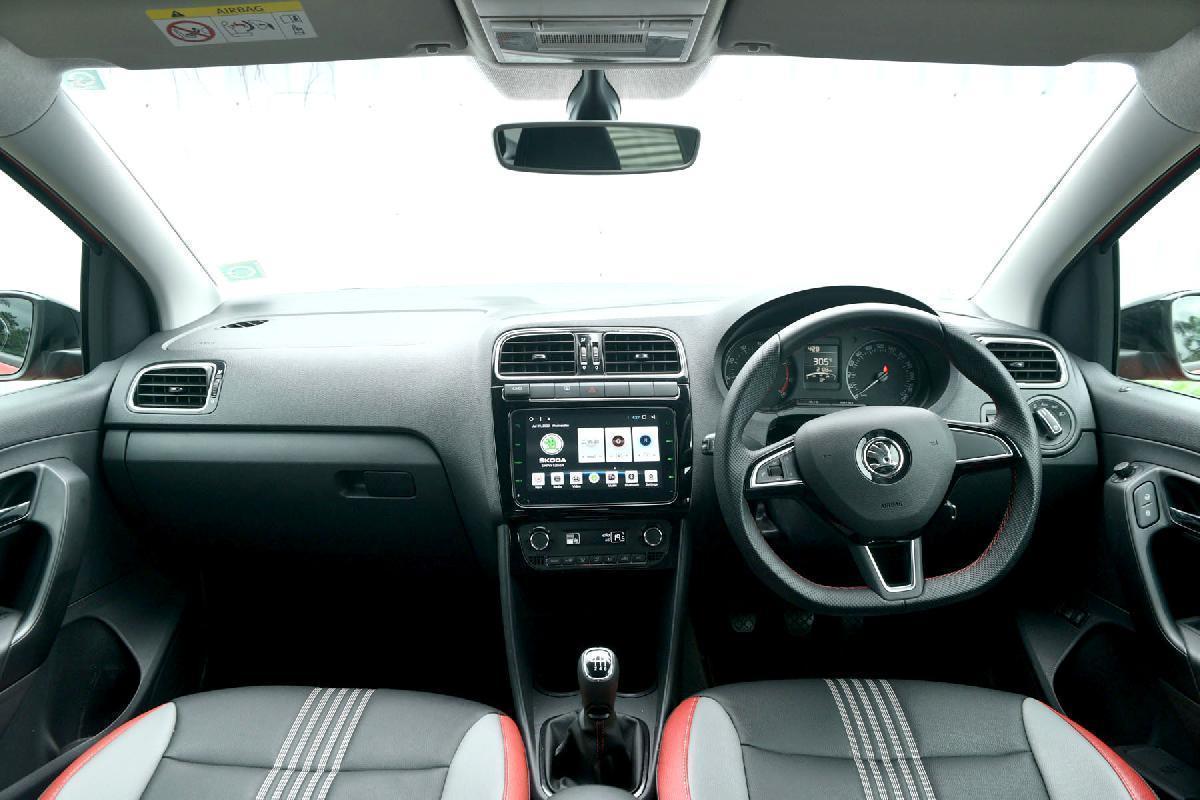 When it comes to space, it has never been a problem in the Rapid, especially for a person of average Indian height. However, if you’re around 6 feet tall, you may find your hair grazing the roofline slightly, if you find yourself in one of the rear seats. The rear seat passengers also get a couple of cushions (with the words Monte Carlo inscribed on them) which Skoda has thrown in to make the seating experience more comfortable. The Rapid, which comes with a dust and pollen filter, also gets adjustable dual rear air con vents for the comfort of the rear seat passengers which are located in the center console, thereby ensuring that everybody only inhales the best quality air whilst traveling in the car. 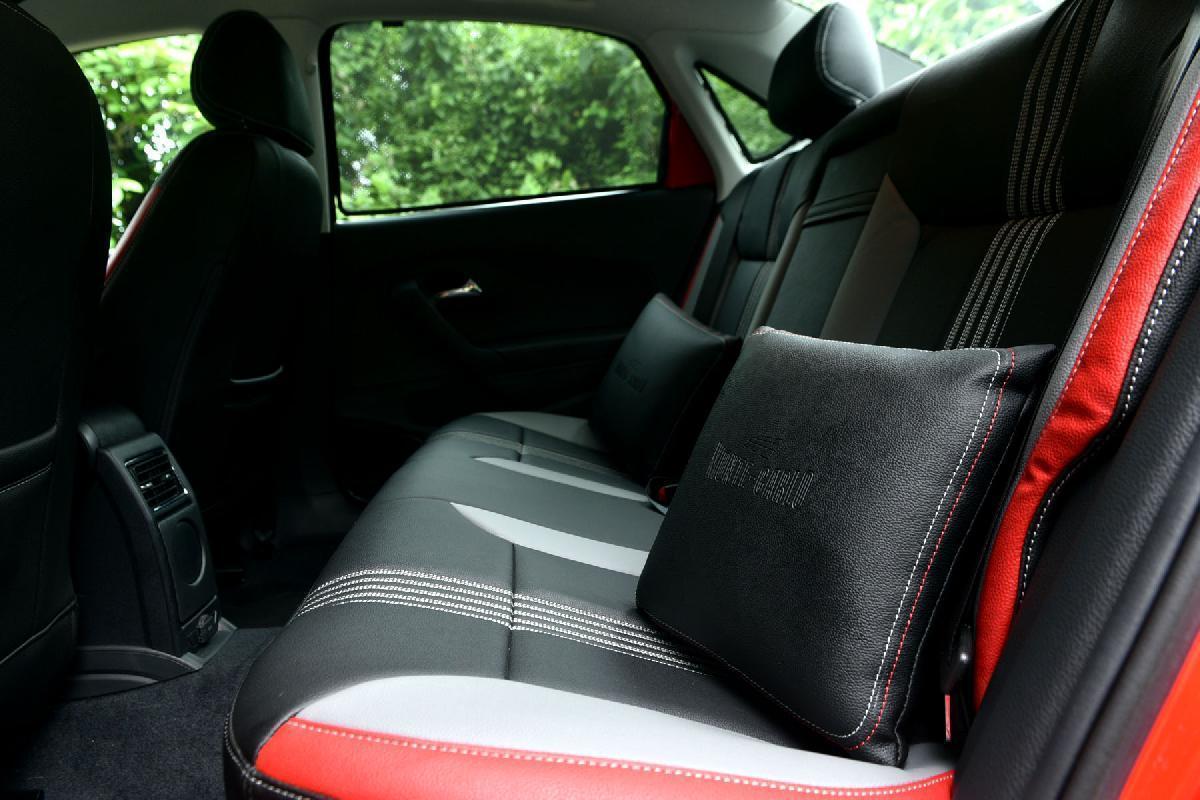 The Rapid’s boot has a slightly higher loading lip and comes with a capacity of 460 liters of luggage compartment space which enables you to carry all your paraphernalia and more during your trips. 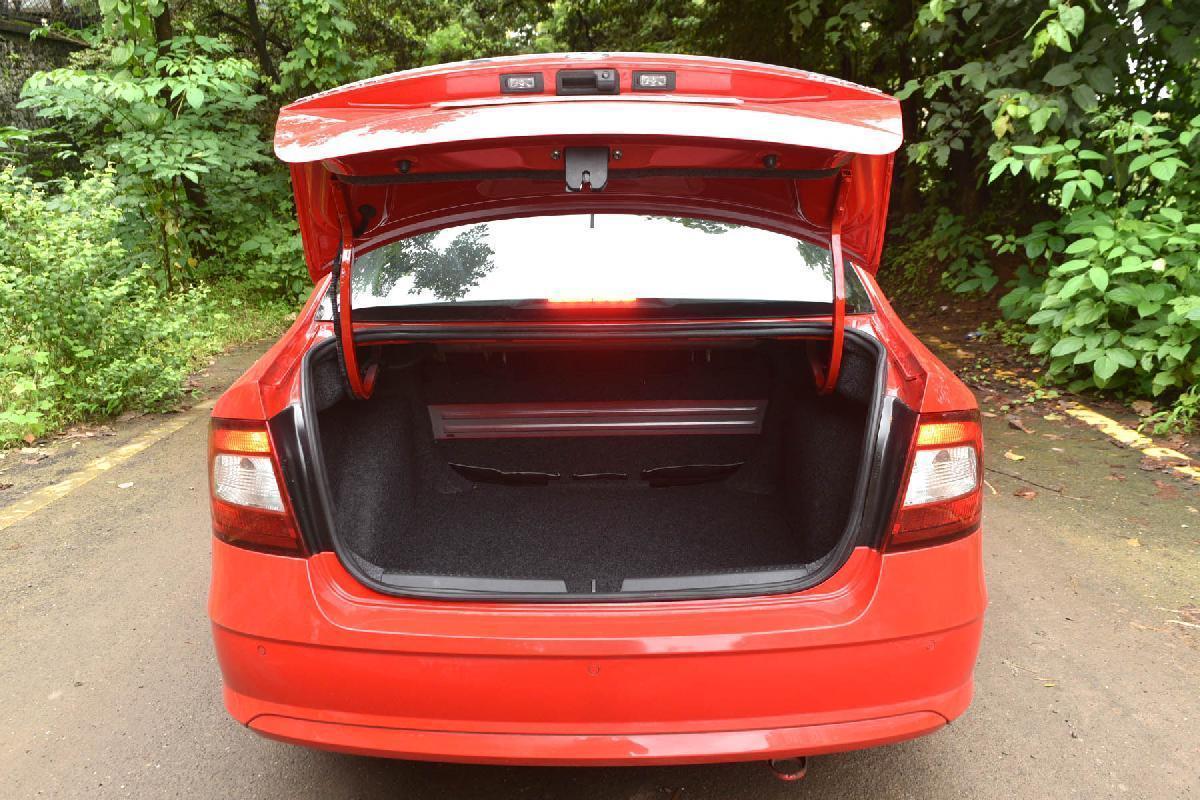 Spoiler alert! Mr. Hyde is about to take over. Is this sedate looking car big on performance? Well, let’s just say that considering Skoda is no longer offering the Rapid with the diesel engine, this 1.0L (999cc), 3-cylinder turbo petrol is your best bet, and frankly, you should be diving for that key fob now! The TSI Petrol engine is surprisingly quick and offers an unforgettable driving experience each time you get behind the wheel. Speaking of which, the Rapid’s leather wrapped, tilt and telescopic, SuperSport steering which has been squared off at the bottom, comes with an attractive red stitching with controls mounted on it so that you don’t have to take your eyes off the road. The electro mechanic powered steering is direct and in fact a well-weighted one, making the car such fun to drive. 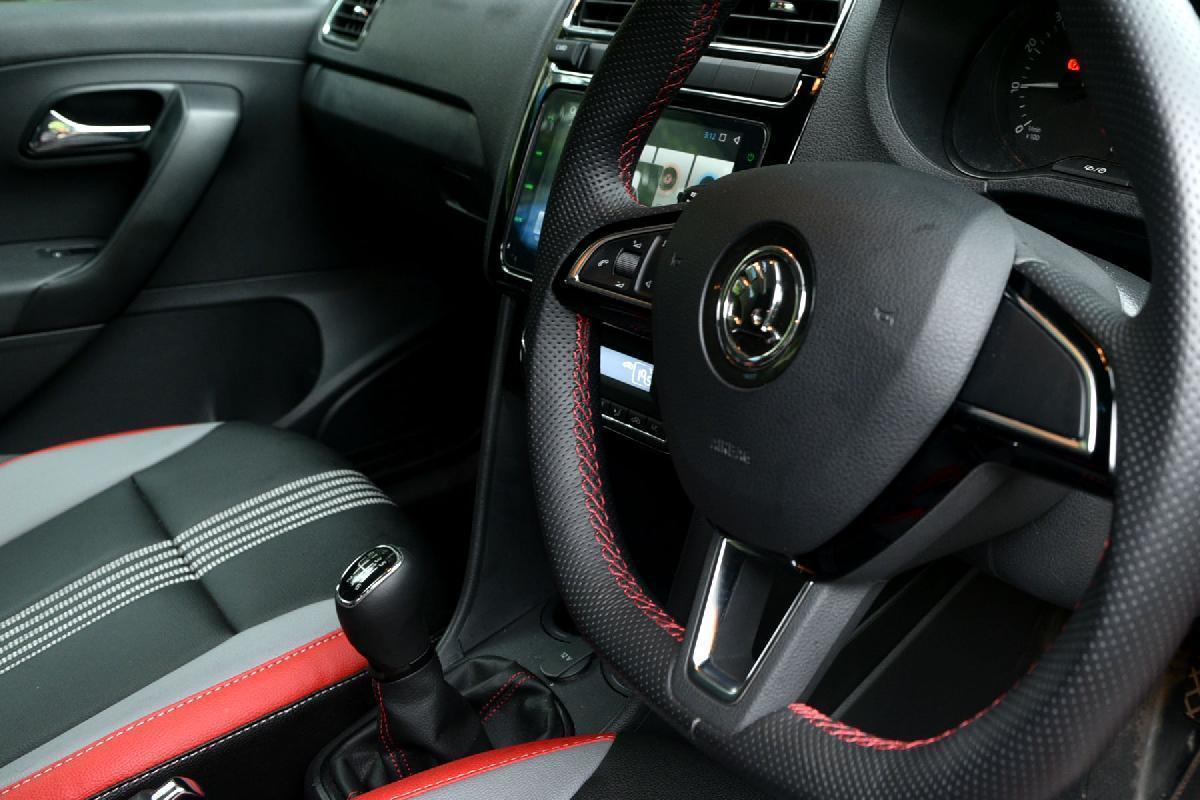 This front wheel drive car is truly a car for motoring enthusiasts which packs enough punch with its 1.0L in-line TSI engine that has been mated to a six-speed gearbox which belts out 109bhp@5000-5500 rpm and peak torque of 175 Nm@1750-4000 rpm. It is in the mid-range, after crossing the 3000rpm mark that this car truly comes into its own, or let’s just say that is when Mr. Hyde takes over. It is in this power band (3000-5000 rpm) where the most fun can be had with this car as it truly unravels its full potential showing you it’s almost wicked side. Go beyond and you instantly know that it is a stretch. The kerb weight of the car is 1138 kg but the Rapid’s ride quality is super impressive and it feels surefooted at all times. In fact, like all Skoda cars, the Rapid too boasts a robust build quality that makes you feel very safe inside. There is no doubt that the Rapid tackles most tasks with great aplomb. 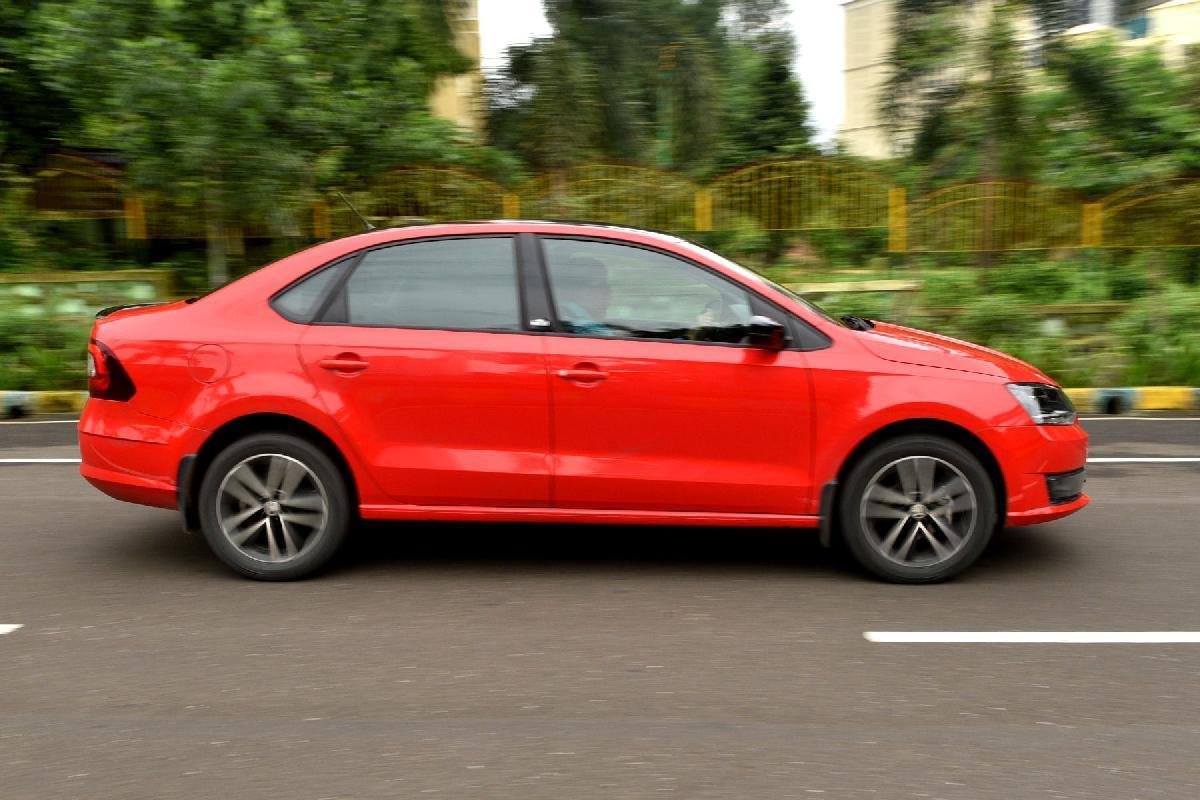 I had a lot of fun slotting this 6-speed manual into its gear slots as I put it through the paces and came away mighty impressed after driving it at both breakneck speed on the highways (I do not recommend driving at breakneck speed to our readers) as well as in city speed limits. For the others who don’t have a heavy right foot and like driving at a constant speed, there is always cruise control, to enjoy a relaxed, hassle-free driving experience. An elegant touch on the Rapid are the turn indicators which just sound so classy, unlike some of the annoyingly loud ones out there. The one thing that Skoda could pay some attention to on the Rapid is the lid of the storage compartment in the center armrest which juts out a bit, making things a tad bit uncomfortable as it interferes with free arm movement, especially while pulling up and releasing the hand brake lever. In terms of the brakes, the Rapid, gets a combination of both disc (front) and drum (rear) brakes which are powerful and have enough bite for our notoriously dangerous roads. 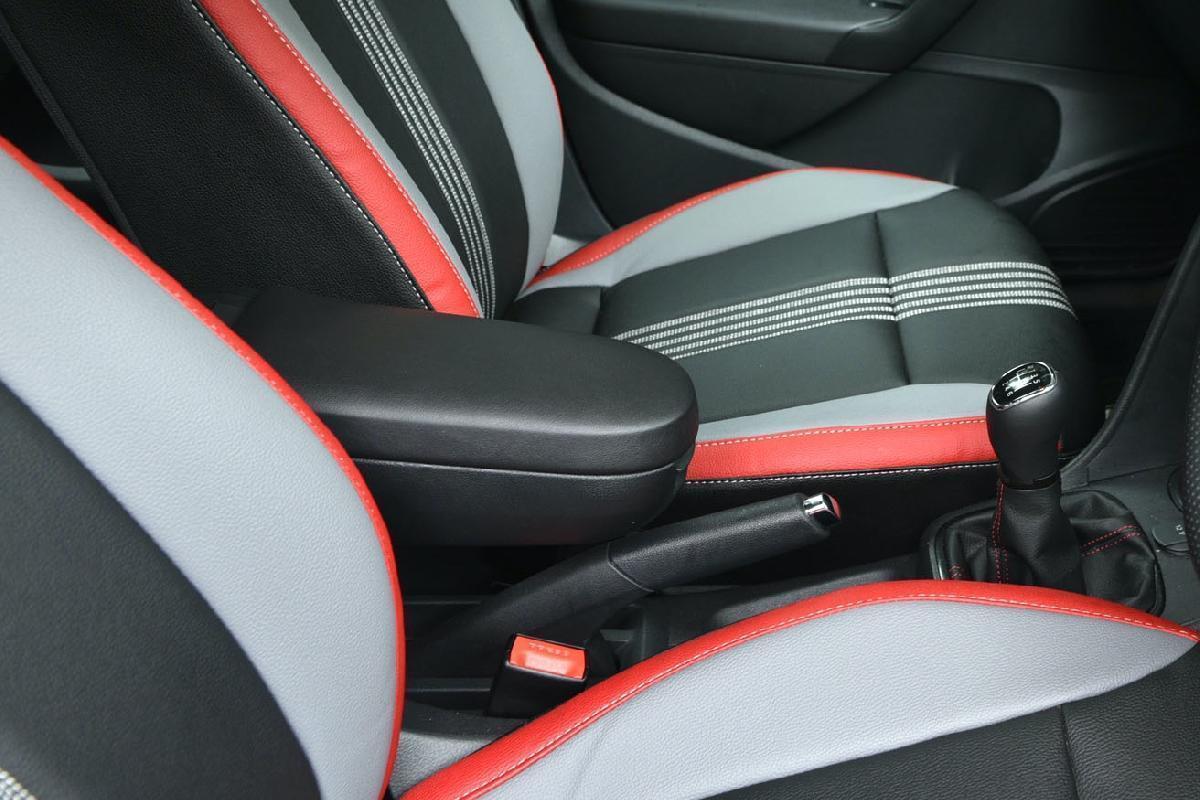 With a fuel tank capacity of 55 liters and a company claimed mileage of 18.97 kmpl, the Rapid, sure makes for a great choice for all those who’re looking at driving a car that is massive fun while not being a gas guzzler. 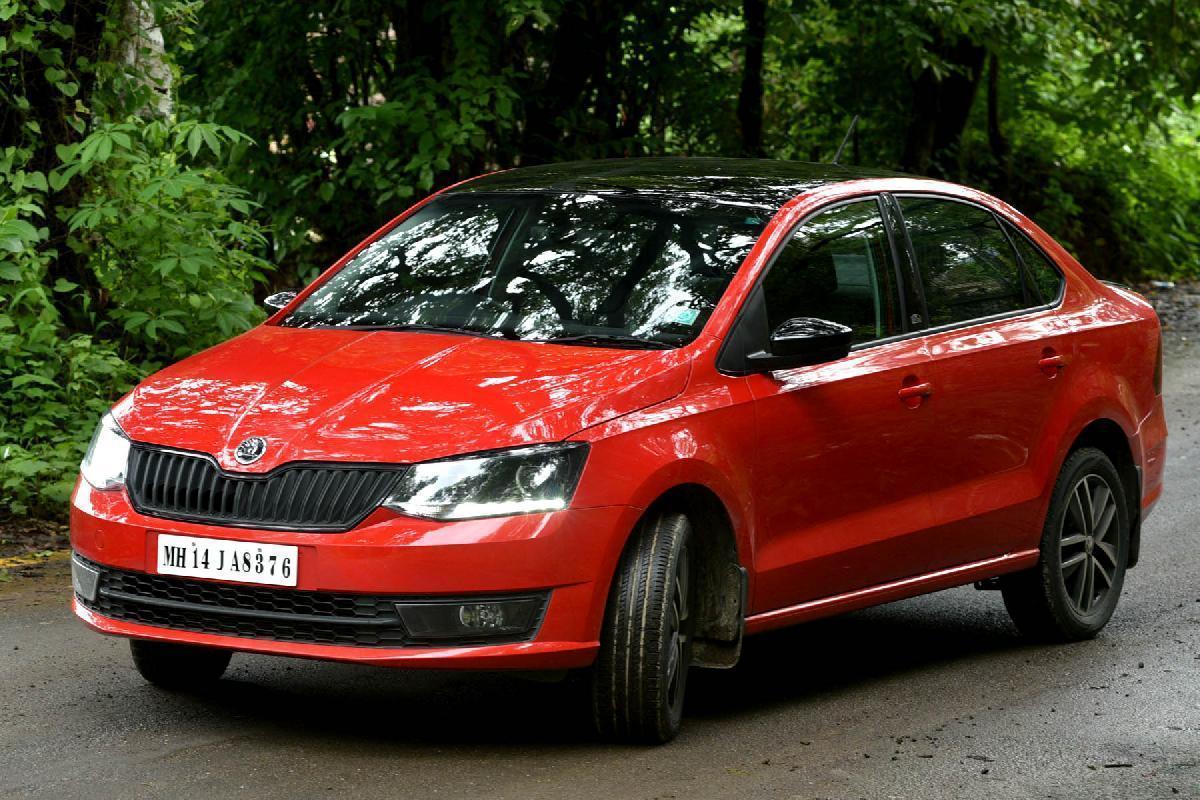 Besides, the company’s 4-Year Skoda Warranty, 4-Year Skoda Assist, and 4-Year Skoda Maintenance package, should have you completely covered. Starting at INR 7,49,000 Lakh (Ex-Showroom India) for the base variant and going up to INR 11,79,000 Lakh (Ex-Showroom India), the Rapid TSI, is not only aggressively priced but it certainly is not a car that you can afford to ignore when you’re in the market for a mid-sized sedan. It can be your day car for commuting to work and your night car when you want to have wild time in the city bringing out both facets of your Jekyll and Hyde personality as it will dutifully ferry you from one destination to the other while giving you a performance to match your mood. Either way you choose to drive it, one thing is for sure, you can’t go wrong with the Rapid. Afterall, it is a Skoda – “Simply Clever.”