With the Sonet, Kia's most important launch in India, it will enter the most competitive sub-4-metre segment. Does this head-turner have what it takes to get to the top? We find out.

One has to accept some inalienable truths. Despite the global pandemic, India’s love affair with SUVs continues to grow by leaps and bounds. Last month’s sales figures show that of the top 20 best sellers, five are SUVs, of which three are from the most coveted class – the compact segment. Competition will only intensify further with the launch of the Kia Sonet, next Friday. The Sonet will be available in three powertrain options, the naturally aspirated 82bhp 1.2-litre petrol, 1-litre turbo petrol with 118 ponies and the 1.5-litre diesel with two power output trims — 99bhp and 113bhp — latter being automatic, which is a first in this segment. A lot is expected from the Sonet and we are also keen to find out if it can be the game-changer that many believe it could be and so, we drove the turbo petrol and diesel automatic GT Line variants. 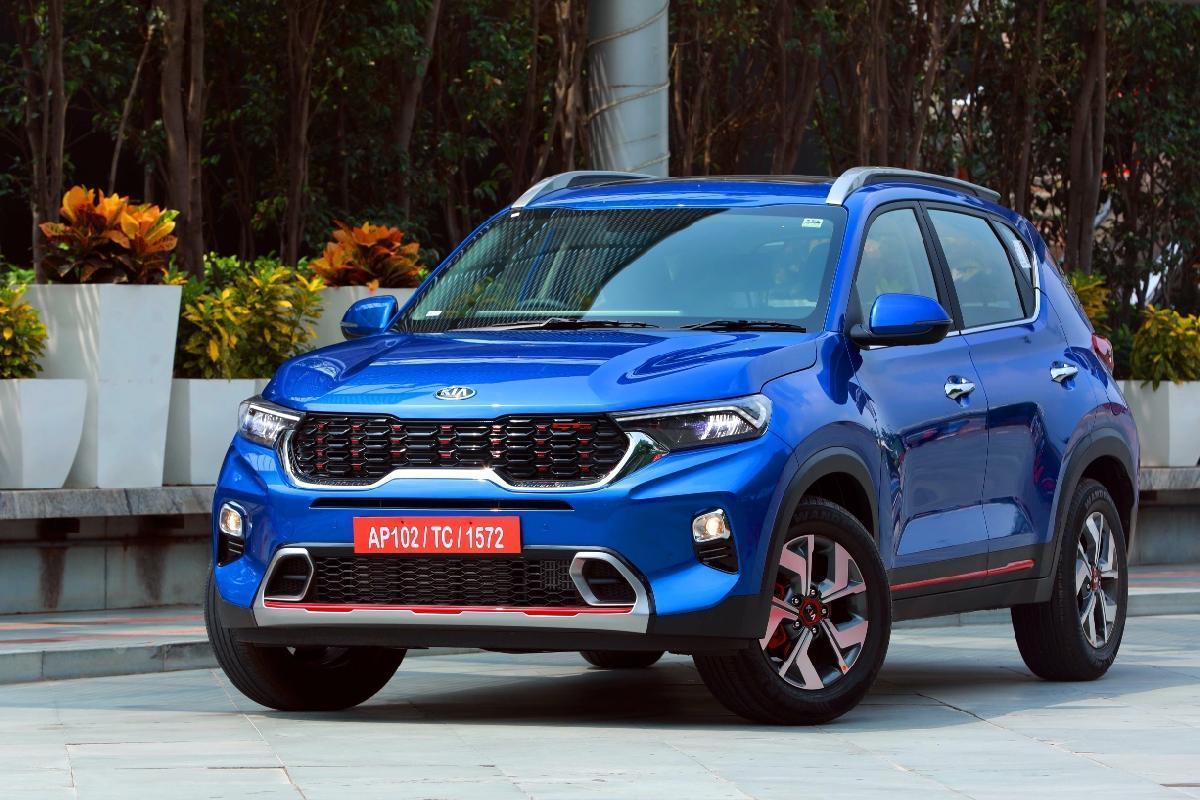 You may or may not be a fan of Kia’s edgy design philosophy, but you certainly can’t ignore its road presence and the Sonet too manages to draw a lot of attention. You’ll notice the character lines, the curves and its aggressive looks and see that Kia has managed to get the proportions spot on. What makes the Sonet distinctive is its clean exterior design with the Tiger Nose grille complemented by a smart-looking chrome finished knurling at the lower part of the grille running in-between the full-LED headlights. The eyebrow like DRLs is neatly tucked inside above the headlamp cluster, while the projector fog lamps are placed below it. 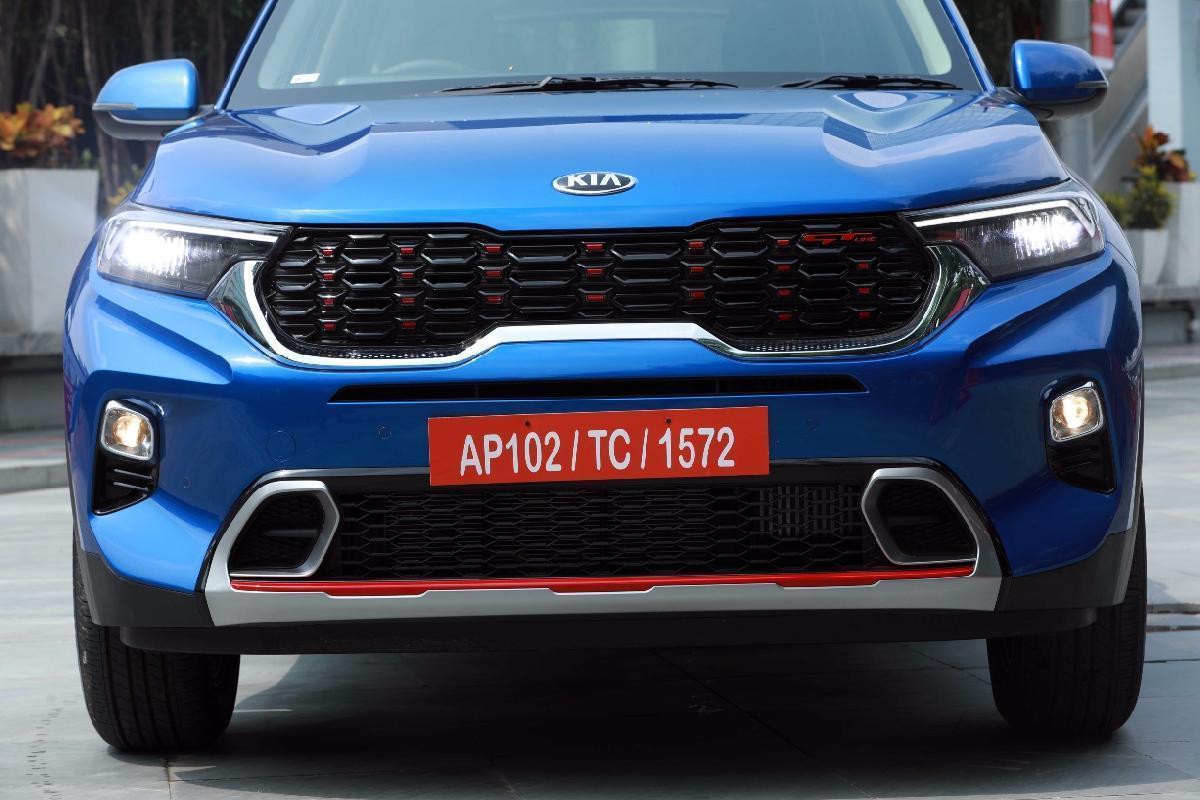 The sports trim comes with the all-black grille with red inserts and the GT Line badge on the corner. 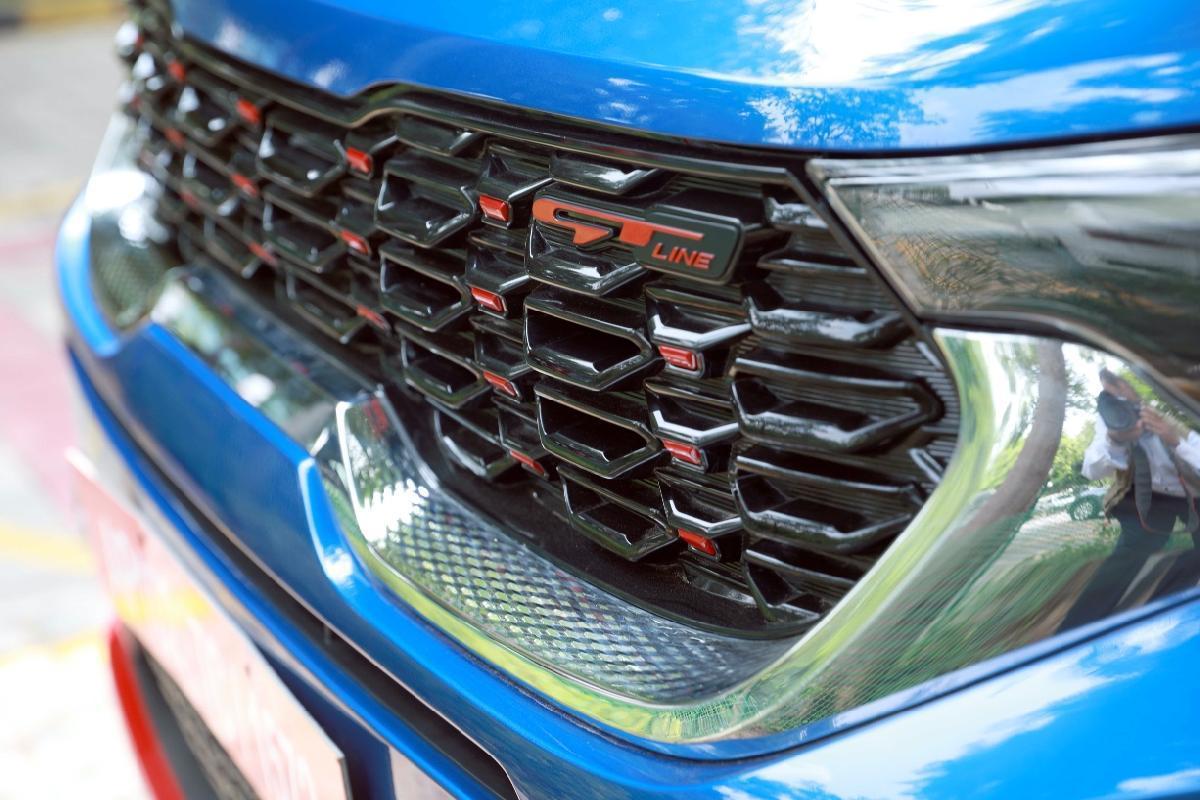 The chiselled front bumper gets a metal finish skid plate with additional air duct vents, unlike the Tech Line. There’s a thin chrome strip on the window lines and red accents on the lower part of the roads. As masculine as the Sonet looks from the front, it’s quite impressive from the rear as well with at least three prominent creases running between the LED taillights and on the boot lid. While the rear diffuser area gets a brushed metal finish, the skid plates are in contrasting black colour.  It is one of the best-looking SUVs in its segment. 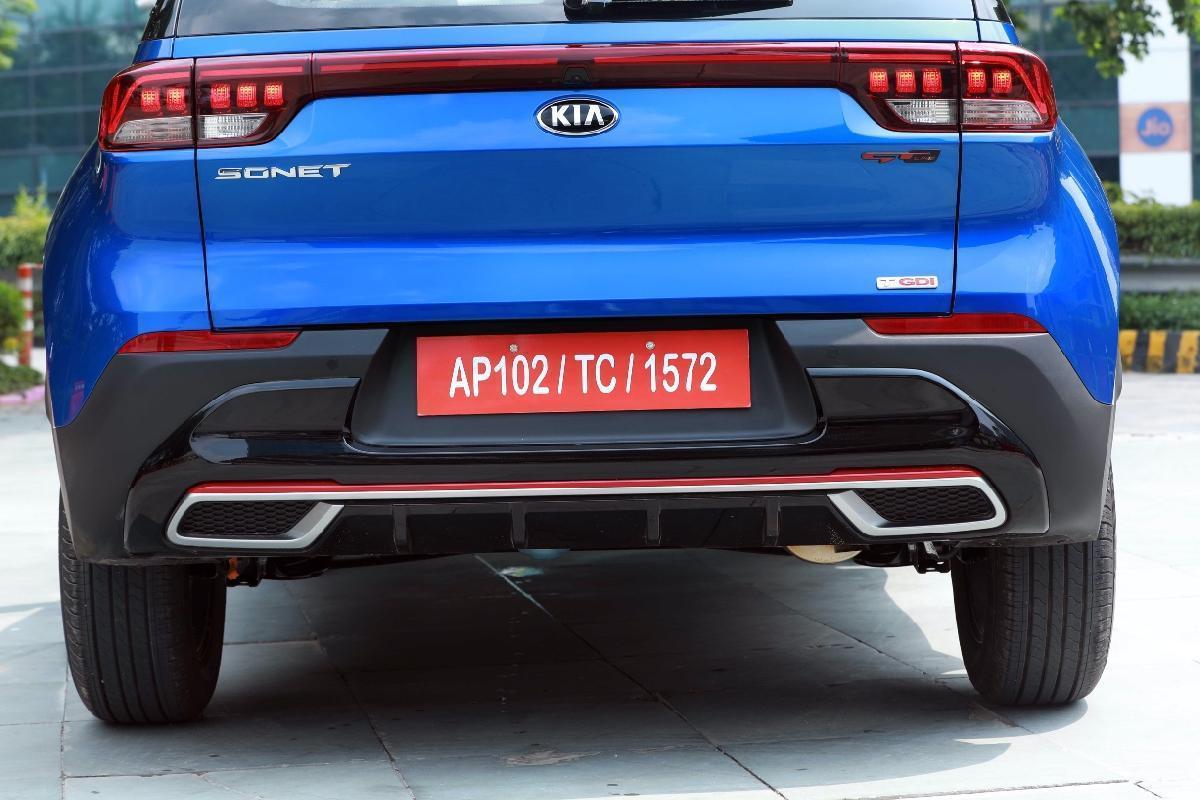 Inside the cabin, with all the creature comforts, the first thing you notice is the all-black interiors with red stitching on leatherette seats along with GT Line insignia on the backrest. To add another sporty touch to this variant, it gets a flat-bottom steering wheel and we will get to that a bit later. 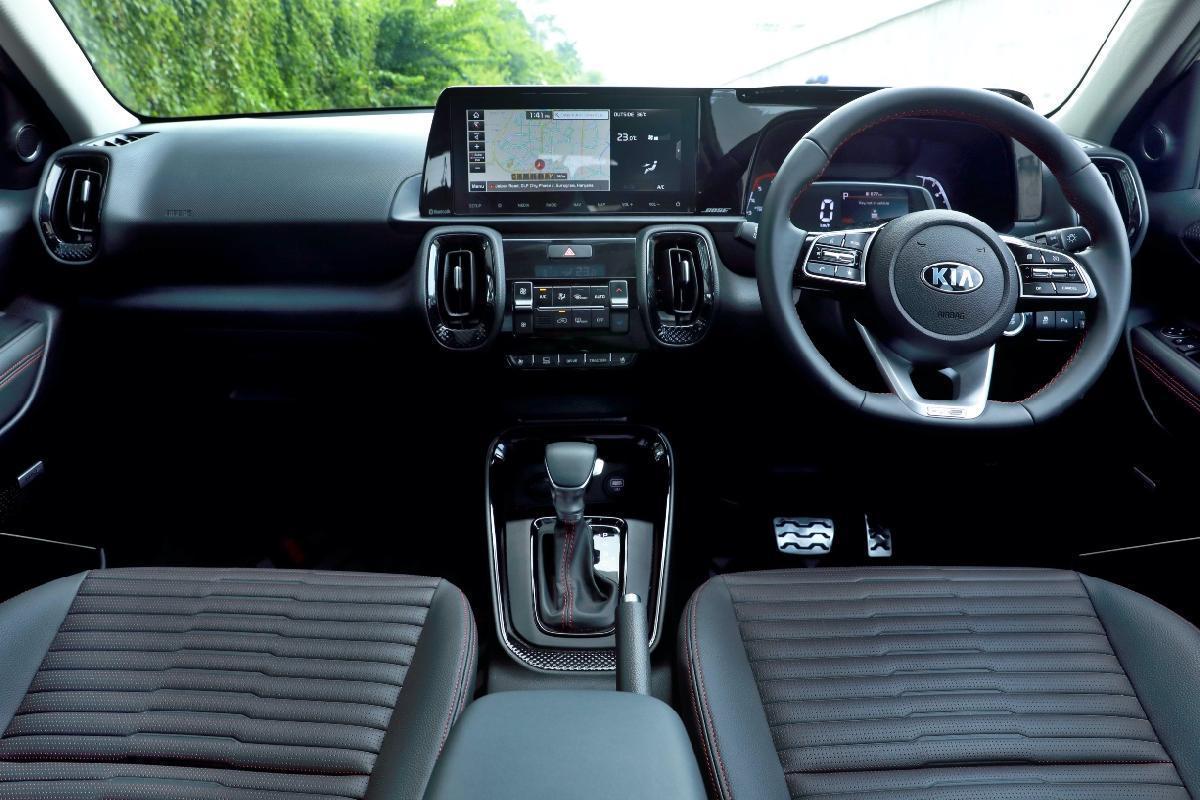 The ventilated seats will provide respite from the heat. The massive 10.25-inch full HD infotainment touchscreen unit hogs all the attention and with good reason too as it is the biggest in its class. Keeping convenience in mind, the display has a split-screen function, thereby letting us use the navigation system while simultaneously scrolling through the other functions. 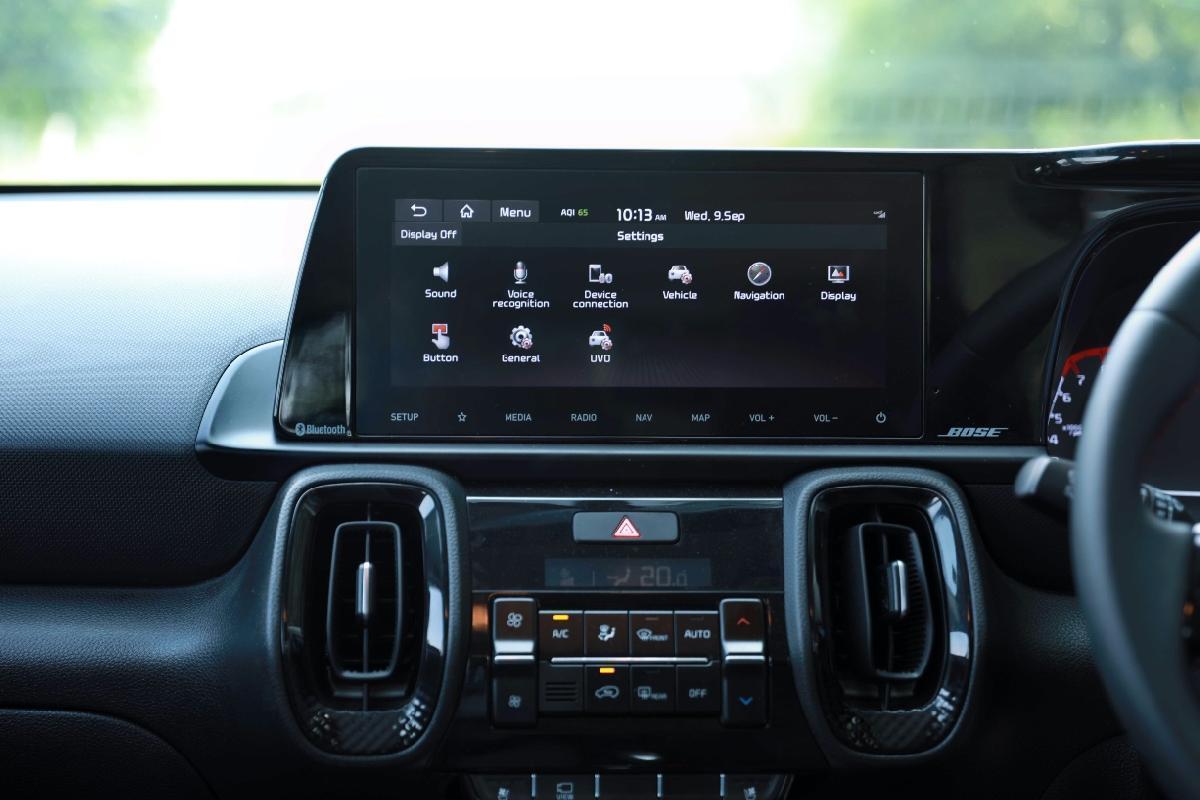 The all-digital 4.2-inch colour instrument cluster is easy on the eyes, but beyond aesthetics, it is multi-functional as it reads out turn-by-turn navigation alerts and displays both the front and rear parking sensors along with different driving modes in the automatic variant. 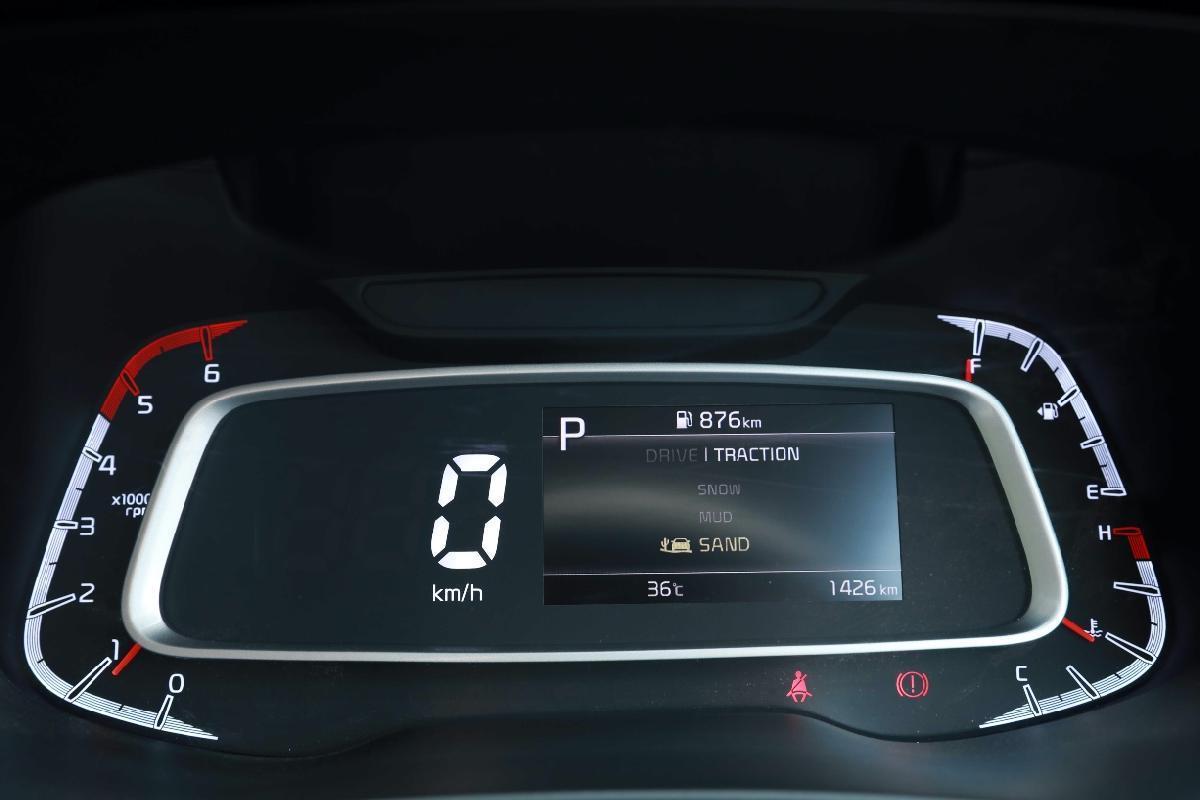 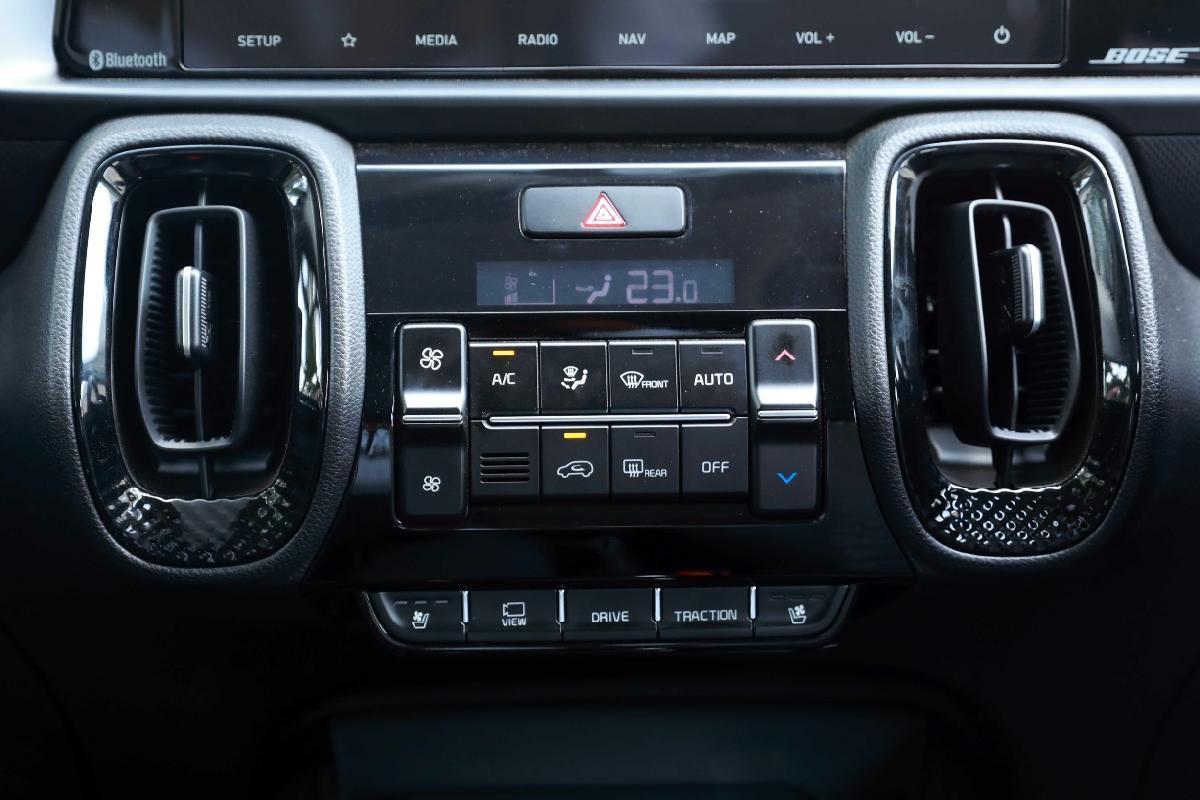 It comes with plenty of storage spaces like two compartments to place your mobile phones with one being a wireless charging pad with a cooling function. The Sonet is the first the SUV in its class which lets you pair two mobile phones via Bluetooth. While the primary one can be used for both calls and music, the secondary can play your favourite tunes. Apart from the usual cubby holes on the side door panels, there’s also an umbrella slot, which can double up as a second bottle holder. 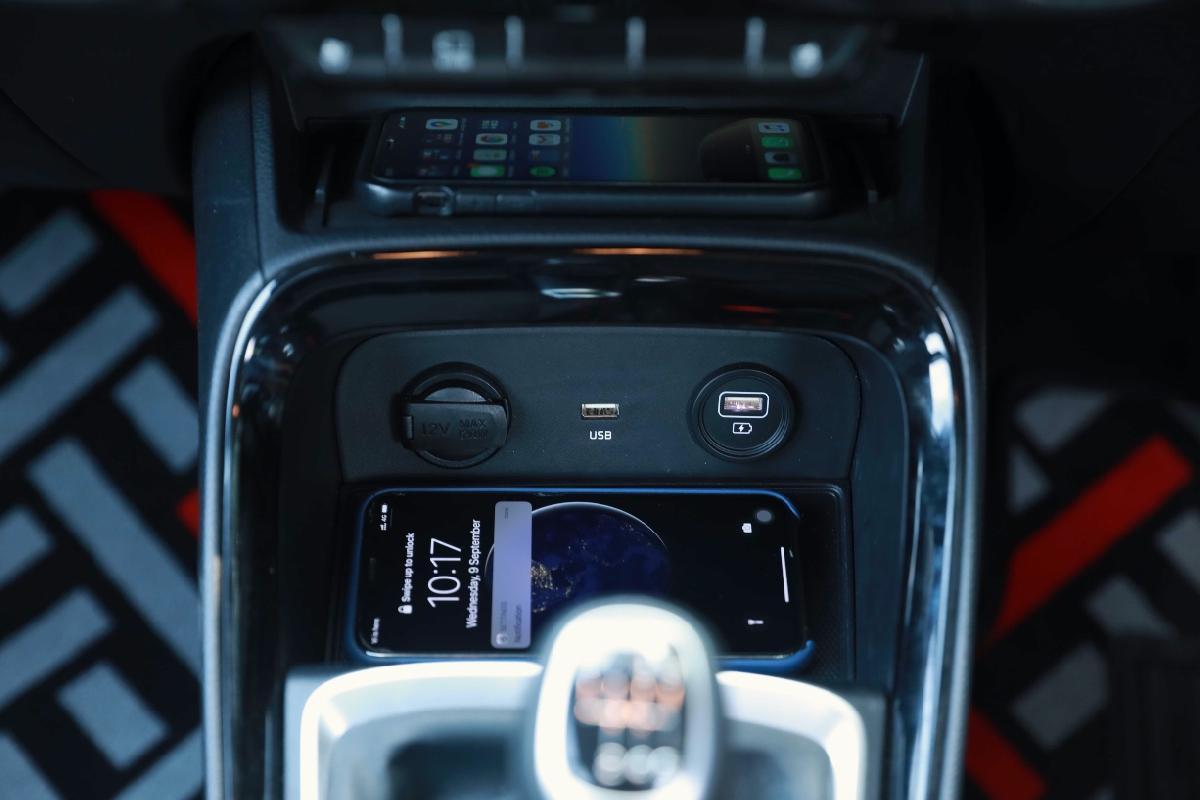 The Sonet’s cabin is well designed and well equipped. Now we all know that all sub-4-metre SUVs’ kryptonite is the lack of leg space for the rear passengers but despite being almost 5 feet 10 inches in height, it offered decent knee room. Apart from this, there’s plenty of headroom and the way the seats are craved, especially at the rear, they offer adequate back and thigh support as the seat squab isn’t too flat. It could have been better if it was slightly in an angular position, but the comfort isn’t hampered in any which way. 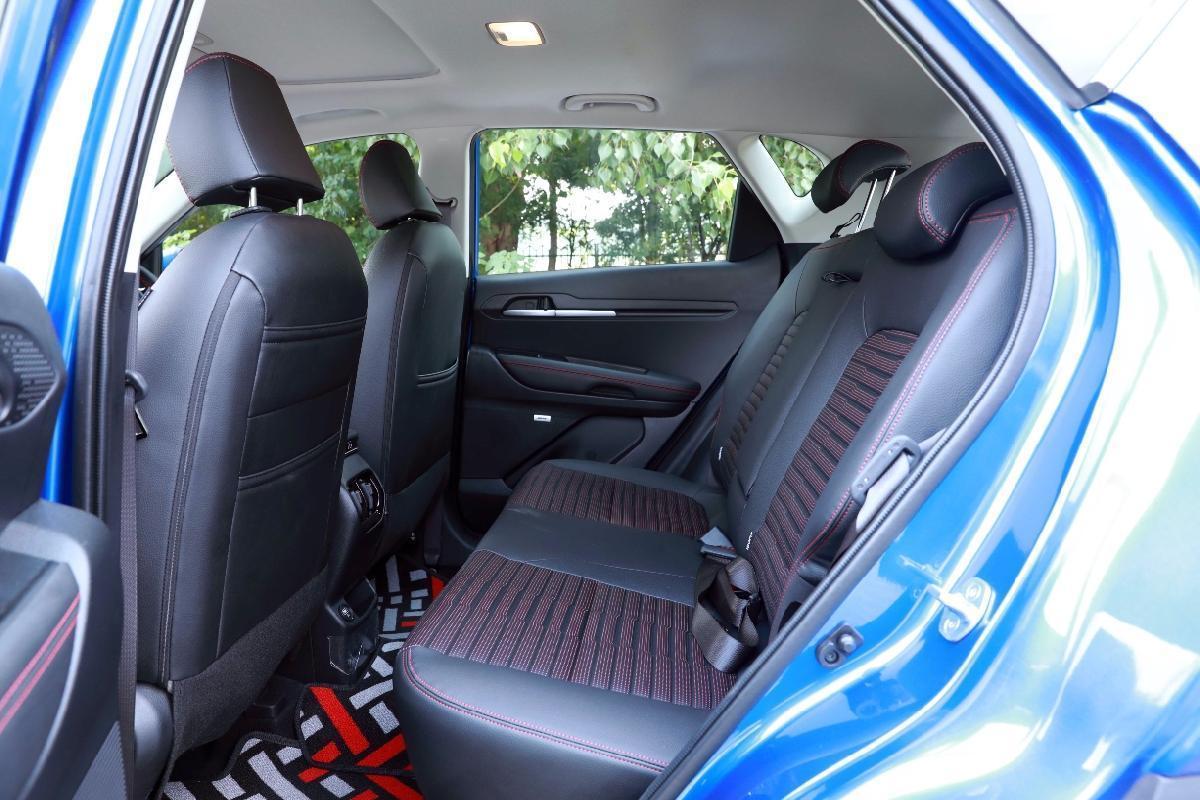 Kia has left no stone unturned as the Sonet comes with the state-of-art air purifier with additional virus and bacteria protection. One really can’t stress enough on the importance of this and it comes with a smart-looking touchscreen control panel too. 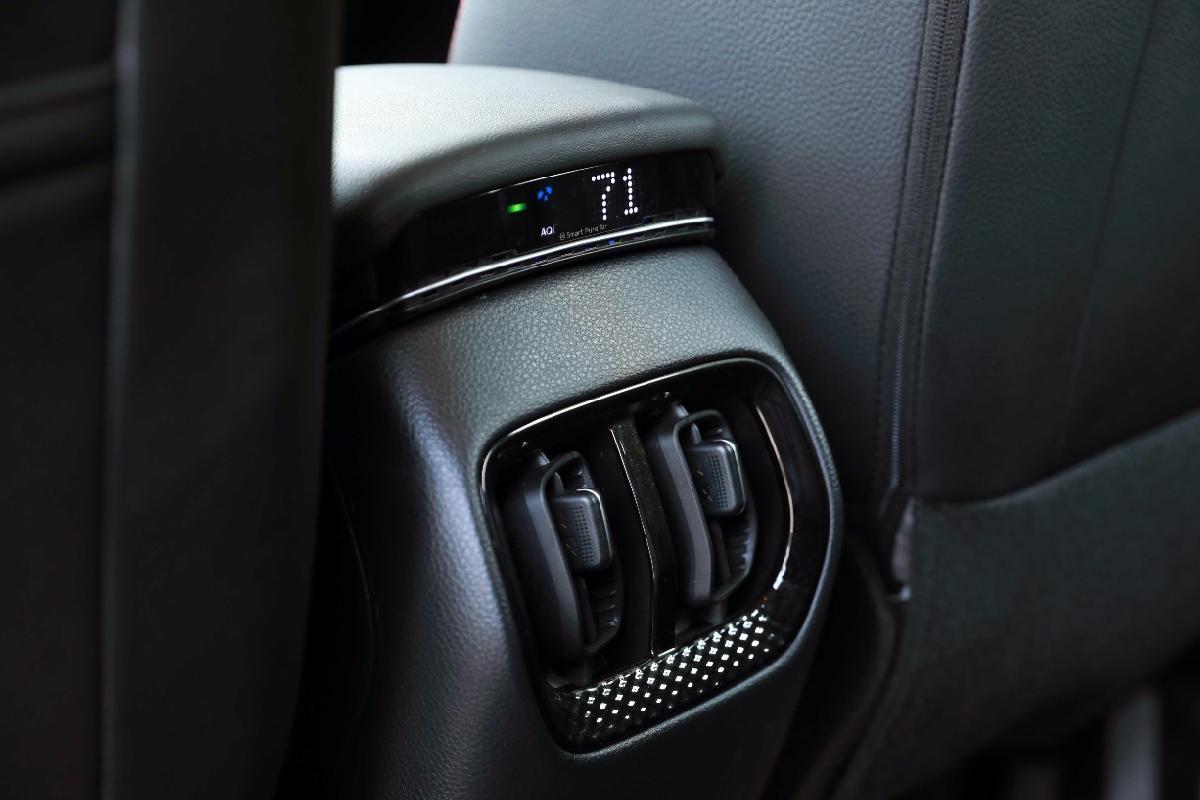 The 1-litre turbo petrol is mated to the intelligent manual transmission (iMT), which basically is a traditional 6-speed transmission without a clutch pedal. On paper, you get the best of both worlds as you get to control the gear shifts without the hassle of a clutch pedal which is taken care of by a sensor and the hydraulic actuator in the transmission. Slot it in first gear and like an automatic, it will start to crawl. This will be a relief to many as there isn’t any chance of the vehicle rolling back on an incline. Initially, I kept forgetting that I had to manually change the gears as my left foot was relaxing on the dead pedal my brain kept thinking it's an automatic, but once I got the hang of it, it was an effortless experience. To ensure that you experience a seamless transition, it’s best to take your foot off the accelerator before you change the gears. You can still up-or-down shift while stepping on the pedal, but then the gearbox hesitates for a couple of seconds as it reworks its algorithm. In terms of initial pick up, it eagerly responds as the gear shifts are seamless, unlike the lazy nature of an AMT. One should keep in mind that the iMT is all about convenience and comfort, therefore, it doesn’t like being pushed around or change gears too quickly as this tends to confuse the system ever so slightly. 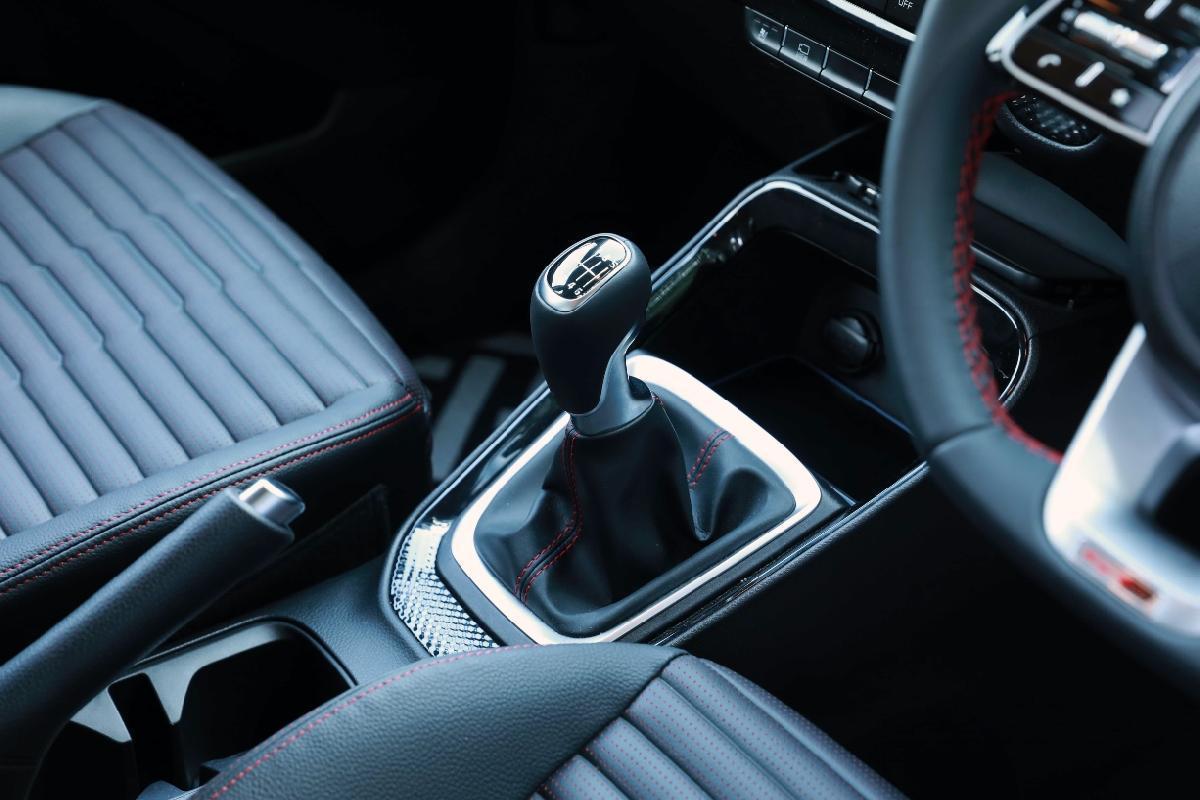 In case of slow-moving traffic, based on the rev meter, the system will adjust accordingly ensuring that you don't burn out the clutch. Also, while driving on a higher gear but at low speeds, the clutch will back off intelligently ensuring the vehicle doesn’t stall.

In many ways, the iMT manages to replicate the experience of a manual gearbox apart from managing to do wheel spins, which is hardly a chink in its armour, and let’s not forget it offers a comfortable clutch-free drive. In terms of practicality, the iMT should get a lot of takers and we expect Kia to price it aggressively as the turbo petrol will not come with a manual gearbox. 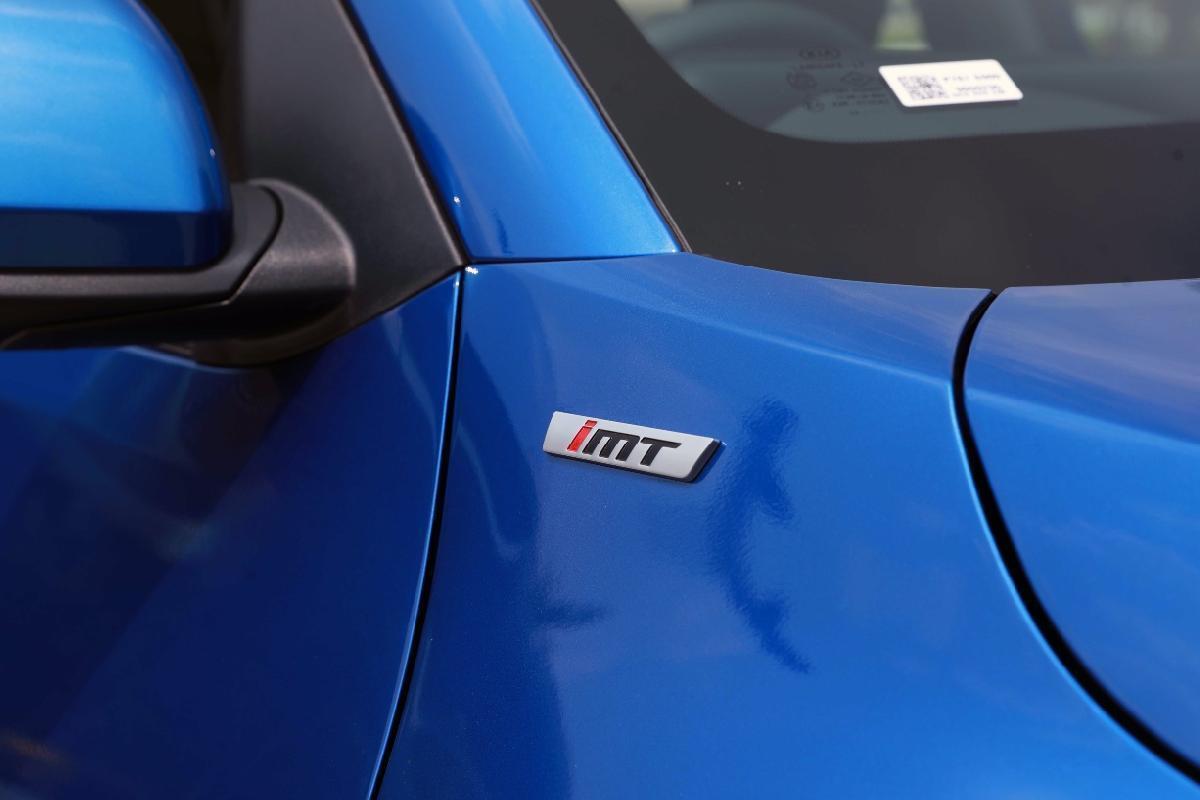 After driving the Sonet iMT, we drove the diesel automatic. This powertrain and gearbox combination is not only the first in the segment but Kia has ensured that the Sonet gets a power output of 113bhp identical to the Seltos. This makes it an interesting proposition as most SUV customers still prefer diesel over petrol motors. The 1.5-litre motor is mated to the tried-and-tested 6-speed torque converter automatic. Fire up the engine and one can hardly hear the typical diesel clatter. The Sonet does a good job in insulating the engine noise. While stepping on the accelerator, the automatic gearbox smoothly upshifts without any delay and Kia has managed to negate the turbo lag to a minimal as the power comes in as low as 1,200-1,300rpm and continues to feel brisk till 4,000rpm. The top-end is where its power starts to plateau out, but keeping daily driving requirements in mind, there’s sufficient power on offer. If one has to nitpick, then the gearbox doesn’t downshift as quickly as one would have liked. In terms of refinement, it is one of the best in the market. 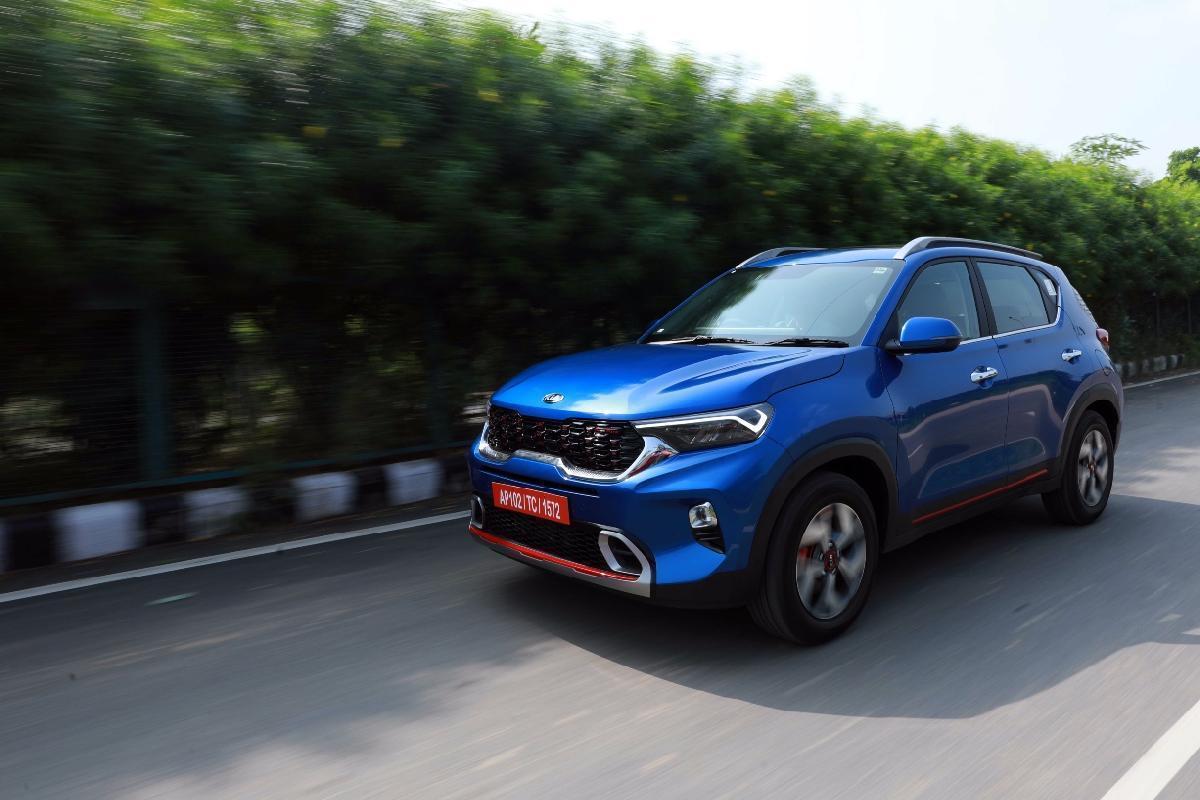 The automatic comes with three driving modes — Eco, Normal and Sport. In normal mode, it has a nimble response and changes gears once the rev needle crosses 2,200-2,300rpm. Even when you need to overtake quickly, the engine provides the needed power without any stress. This mode offers a decent driving experience both in the city as well as on the highway. In Eco mode, as expected the response was more cautious. You could feel that the engine and the transmission were keeping a strict eye on the fuel gauge. What’s impressive is that in the city, the vehicle never felt it was chugging away slowly or underpowered. It’s fairly ideal to negotiate start-stop traffic. The gears change around 1,800rpm mark but as the first two gears have a slightly taller ratio, they let the rev needle go till 2,200rpm. 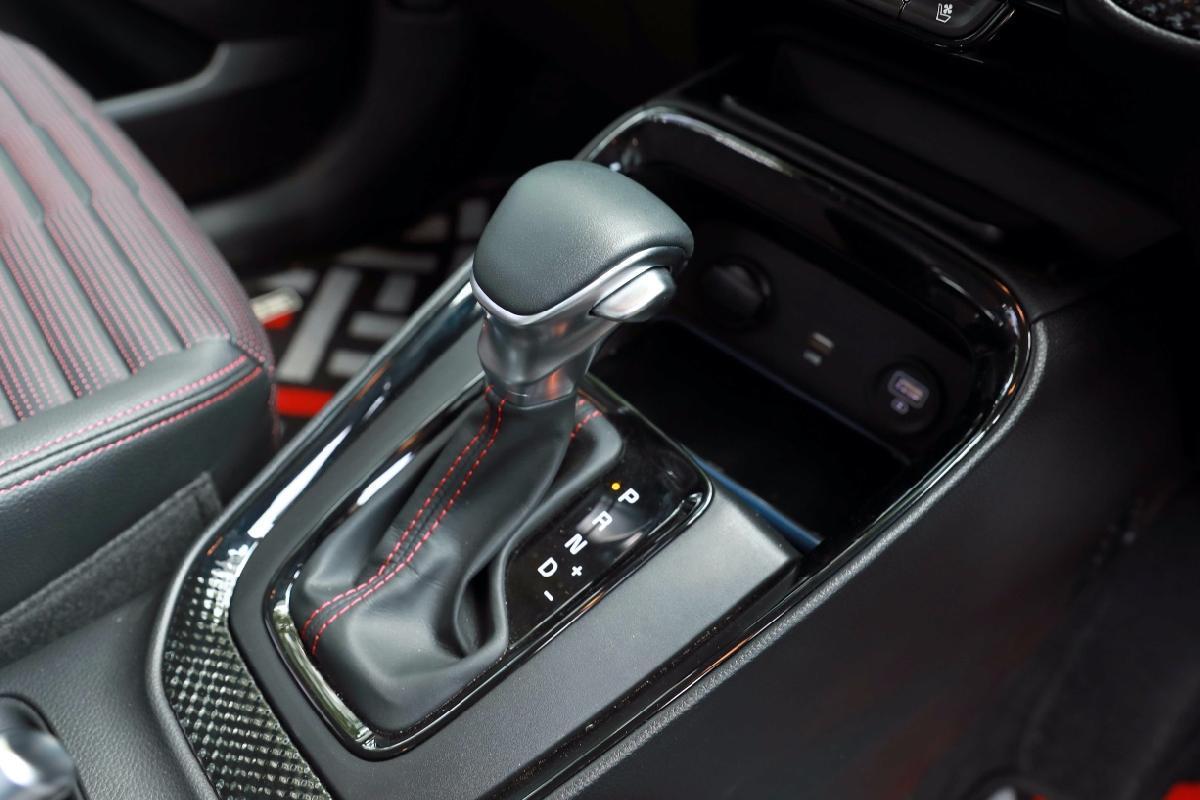 I purposely left the Sport mode for the last. If you drive it in city traffic, it thankfully doesn’t push or force you to step on the pedal, but as it is revving freely the engine sound becomes more audible which makes you subconsciously think you should try and pick up the speed. On this mode, the gear changes at around 2,600-2,800rpm range. If you simply mesh the pedal either on manual or sport mode, the rev needle goes all the way till 4,500rpm then the transmission automatically upshifts. The diesel automatic is very refined, offers evenly spread power, promises to be fuel-efficient and still has enough juice for the highway. 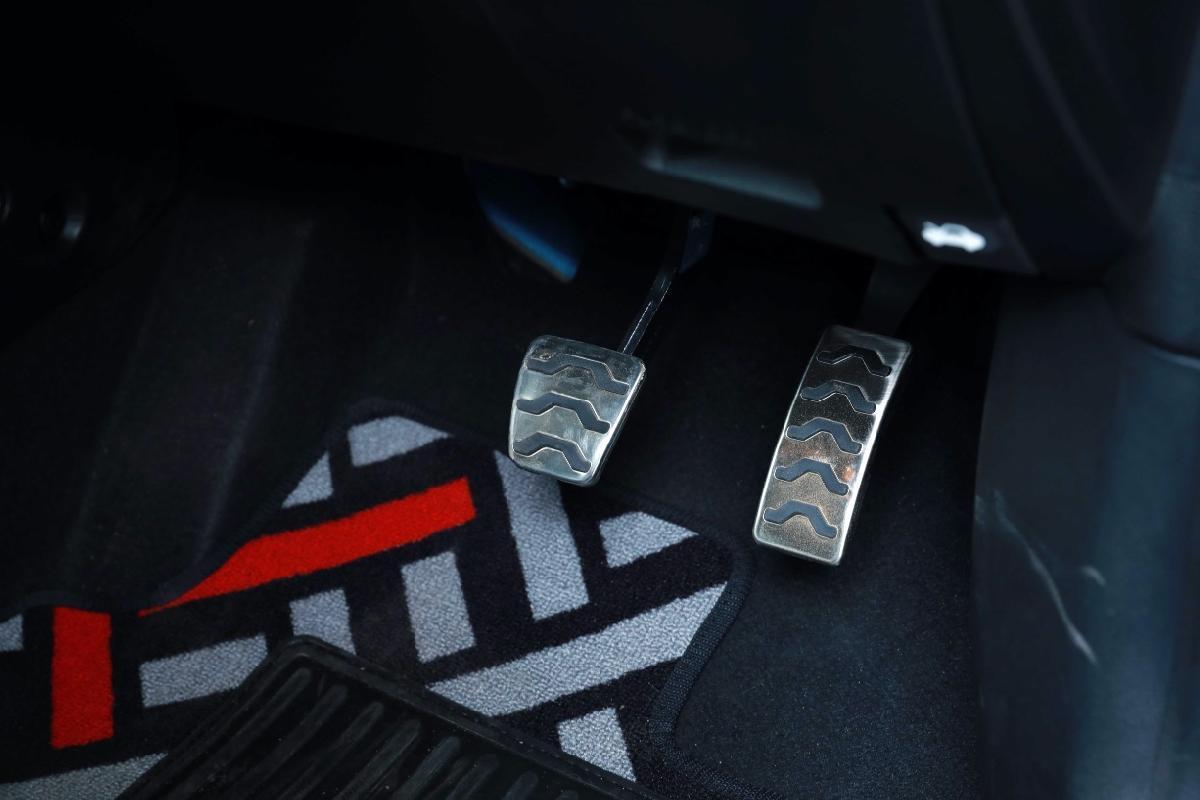 How does the Sonet behave on the road in terms of ride and handling? Kia is associated with a firm ride quality. It offers superior driving dynamics allowing you to attack corners in full confidence, but in case of the Sonet, they have managed to keep it well-balanced. It easily goes over bumps without you feeling a ripple effect, and on the highway, it carpets the surface consistently ensuring a comfortable ride. The suspension set up isn’t on the softer side, therefore, the body roll is under control and it doesn't wallow as well. The weight of the steering wheel is spot on and remains stable on high speeds. As expected in Sport mode, the steering wheel tends to get a bit heavier. 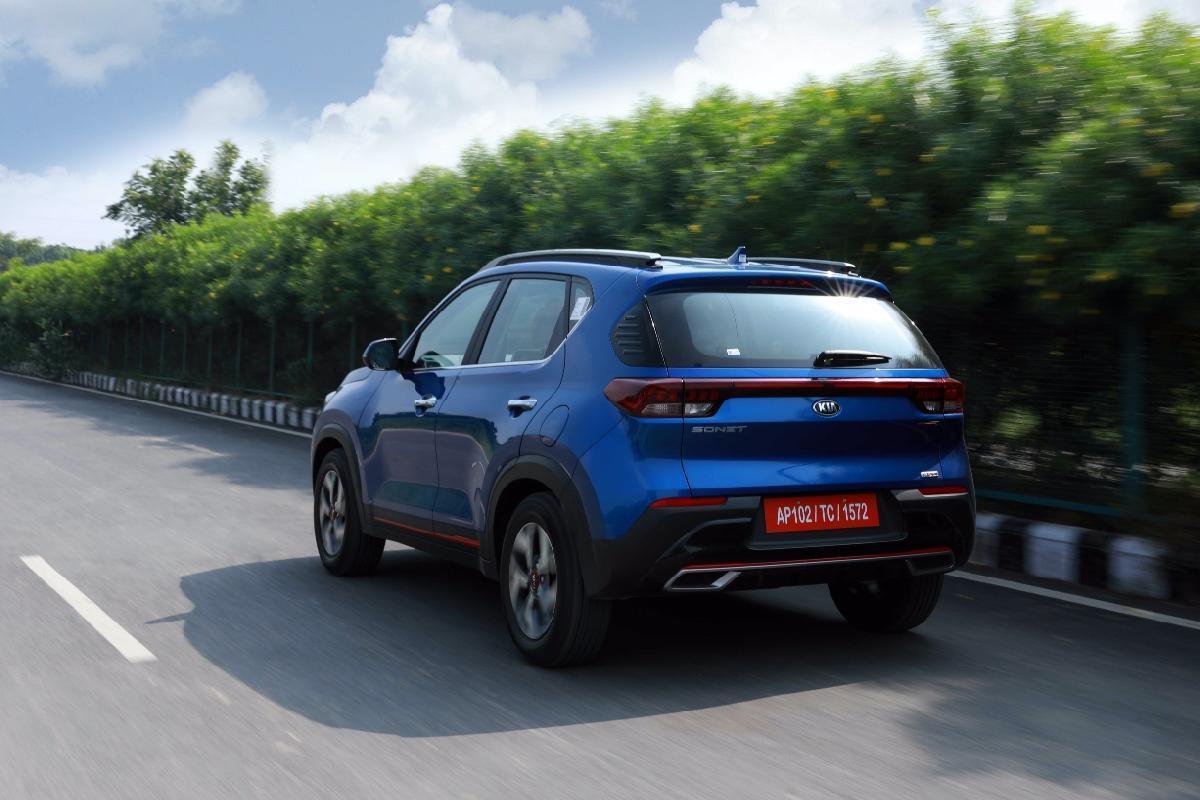 It won’t be an understatement to say that the Kia Sonet will give its competition many sleepless nights as it offers a wide range of engine options that cater to everyone’s requirements. The design makes it stand out in this overcrowded segment and fit-and-finish along with build quality is quite impressive. As expected, it comes fully loaded with the latest features like smart connectivity and AI voice commands that let you control ac airflow, windows, navigation etc. The goodies list doesn't end there as you can remotely start the engine via the key fob the 7-speaker Bose music system's sound quality pales the competition, it comes with a sunroof and it boasts of a class-leading boot capacity of 392 litres. It also has 6 airbags, electronic stability control, emergency stop signal, traction control, hill-start assist etc. The Sonet really has a lot going for it as it’s not just an SUV that’s all pomp and show with the latest technology, but it also has a soul as there’s little bit of something for enthusiasts as well. Now the ball is firmly in Kia’s court as it all depends on how they price this compact SUV. 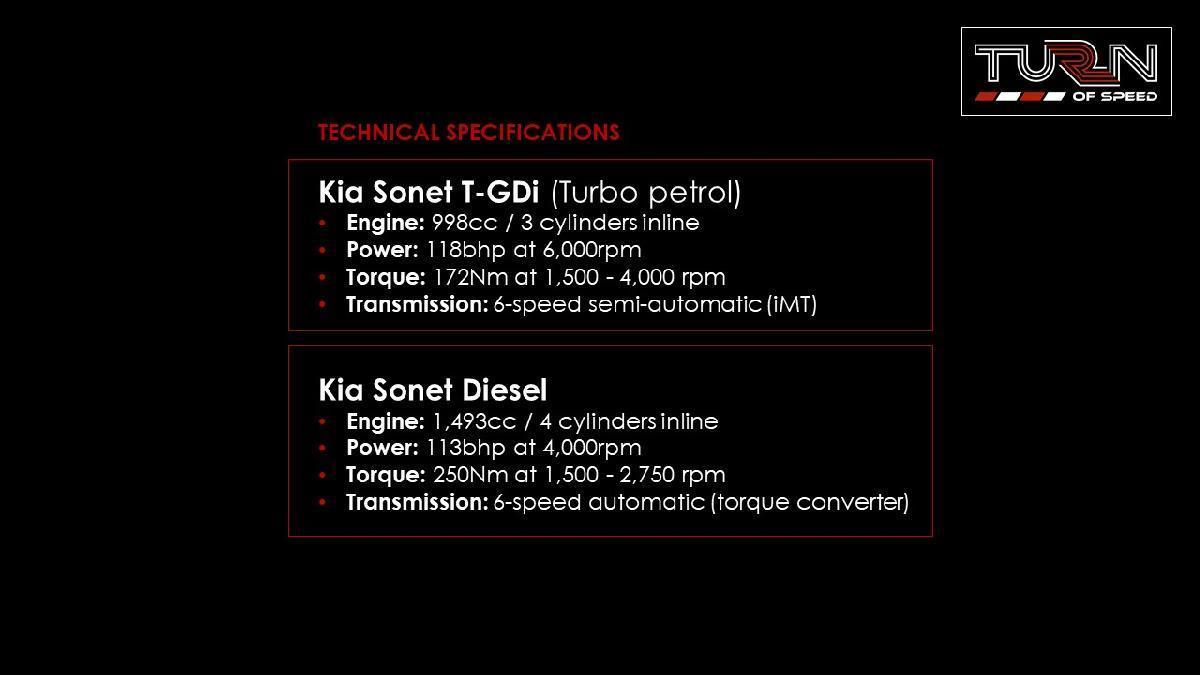