Easily one of the best crossovers that we’ve driven EVER.

VW T-ROC is the kind of car that will light up your face within seconds and not just because it is unconventional in the way it looks or drives, but also because it’s a bit of a rebel of sorts, defying convention and going against the wind. But then, because you’re the fearless type who does things differently, you’re probably in love with this little monster already.

Is it a hatch? Is it an SUV? Not a regular hatch that you’d use to go around to the corner store to buy your bag of chips or your big, bulky SUV that you’d want to drive to Khardung La in, it is a classy crossover that you’d be delighted to drive to work, every morning, and snazzy enough to be seen walking towards when the paparazzi want that perfect shot of you, after your late-night rendezvous. 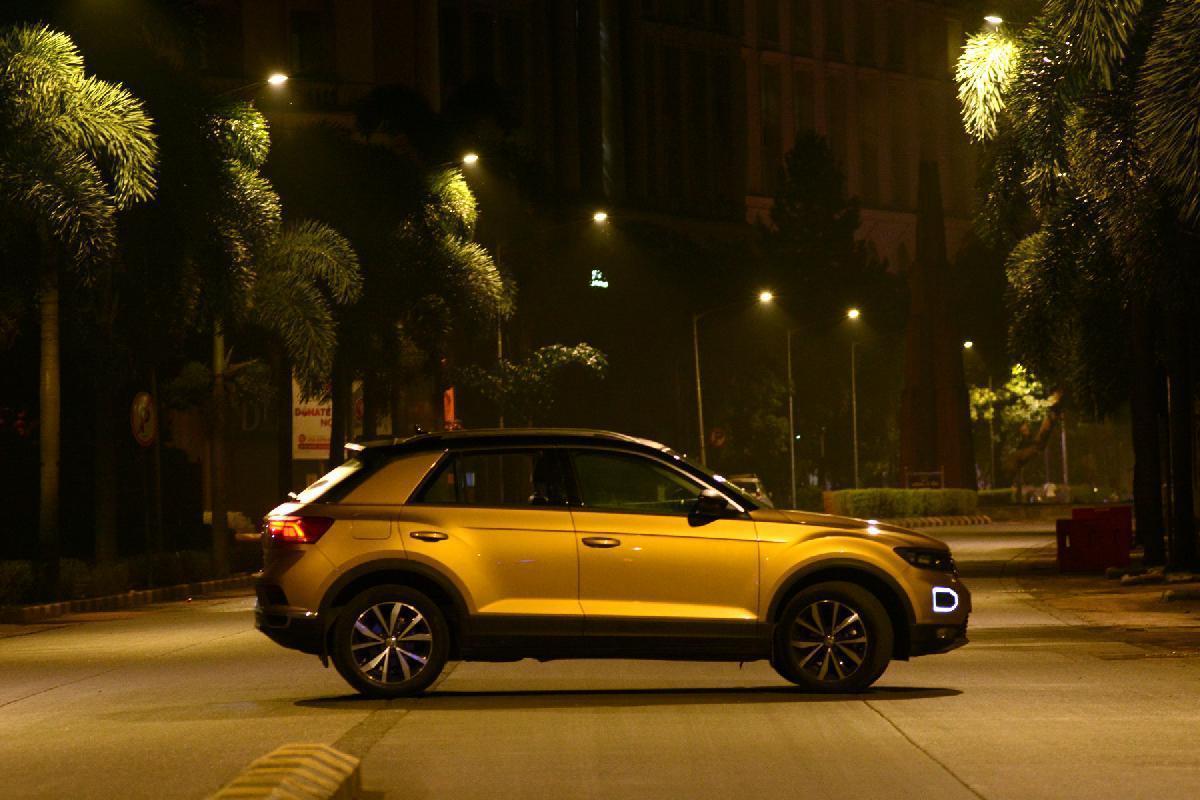 If there is one word to describe the T-ROC, it is ‘exquisite.’ Especially in that ‘Kurkuma Yellow’ colour, which is unlike anything we’ve seen on our Indian roads before. From the beautiful LED headlamps to the signature LED running lamps, that really stand out, to the gorgeous chrome grille that sits beautifully on the front fascia enveloping the headlamps and the VW logo at the center, it all comes together beautifully in terms of design, and looks really well-integrated. Below it is the honeycomb mesh grille with another strip of flat silver running below which breaks the monotony of the black colour, (also spilling over from the sunroof area), in an understated yet elegant fashion. 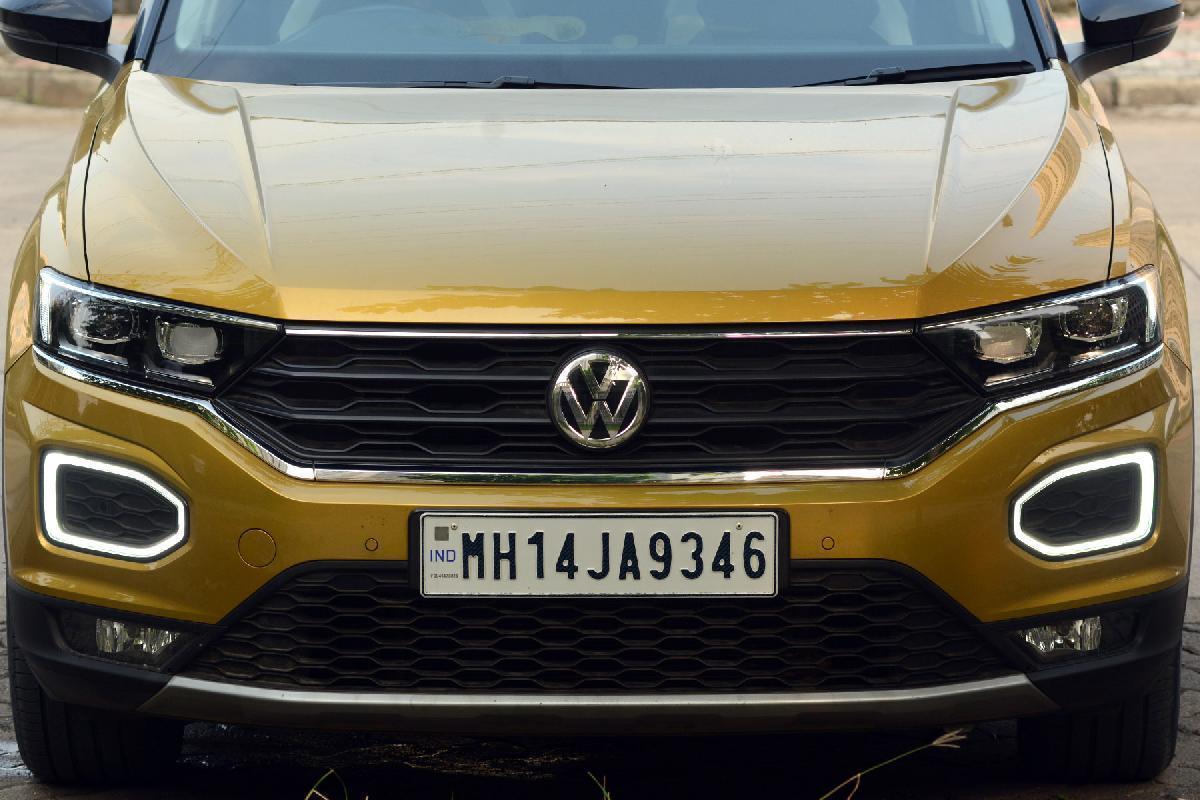 The taillamps jut out ever so slightly, thanks to the clean design cuts, that they receive, in keeping with the overall design scheme of the crossover and are quite a pretty sight. 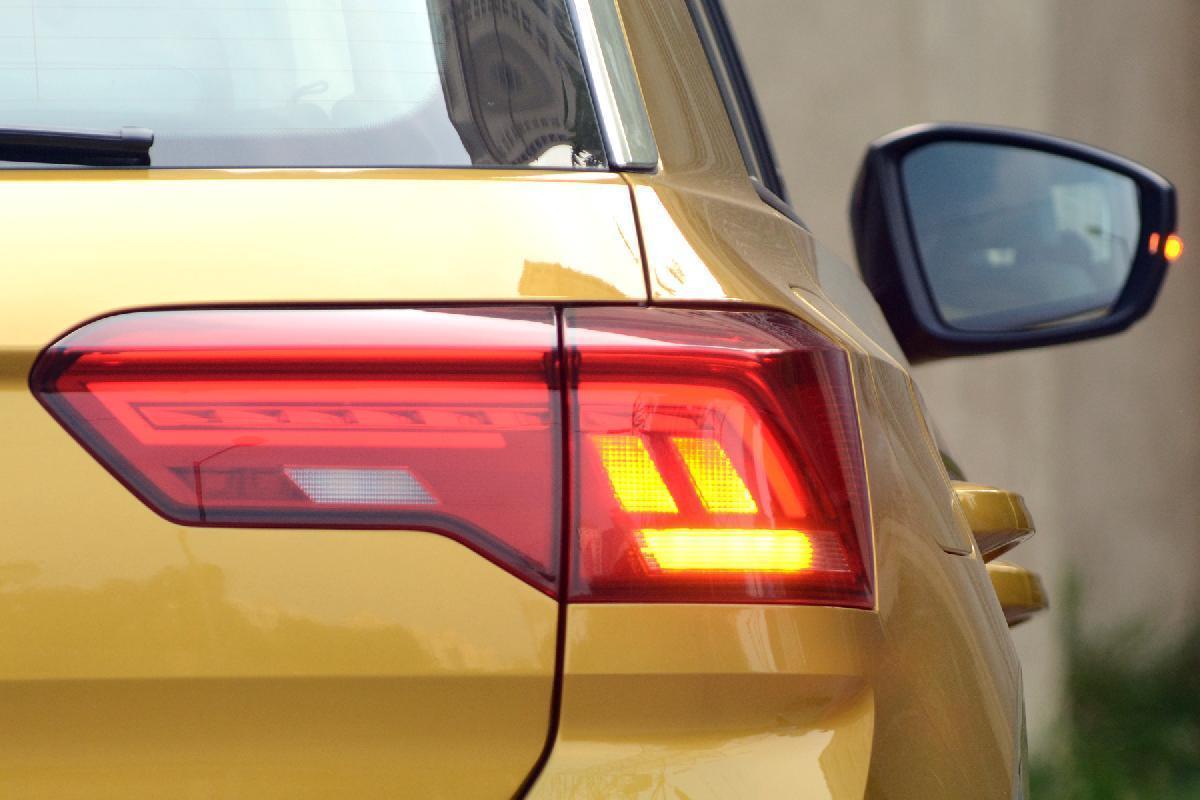 The creases and lines both, on the bonnet and the one above the black side cladding add character to the T-ROC’s looks. Just as the strong line at the rear, running between both the taillamps does. The words T-ROC, at the rear, are a good size too, neither too big nor too small and don’t look awkward on the crossover. Elements of chrome and flat silver are seen again at the rear that surround the faux exhausts and in the form of a flat silver garnish that adorn the T-ROC’s looks. 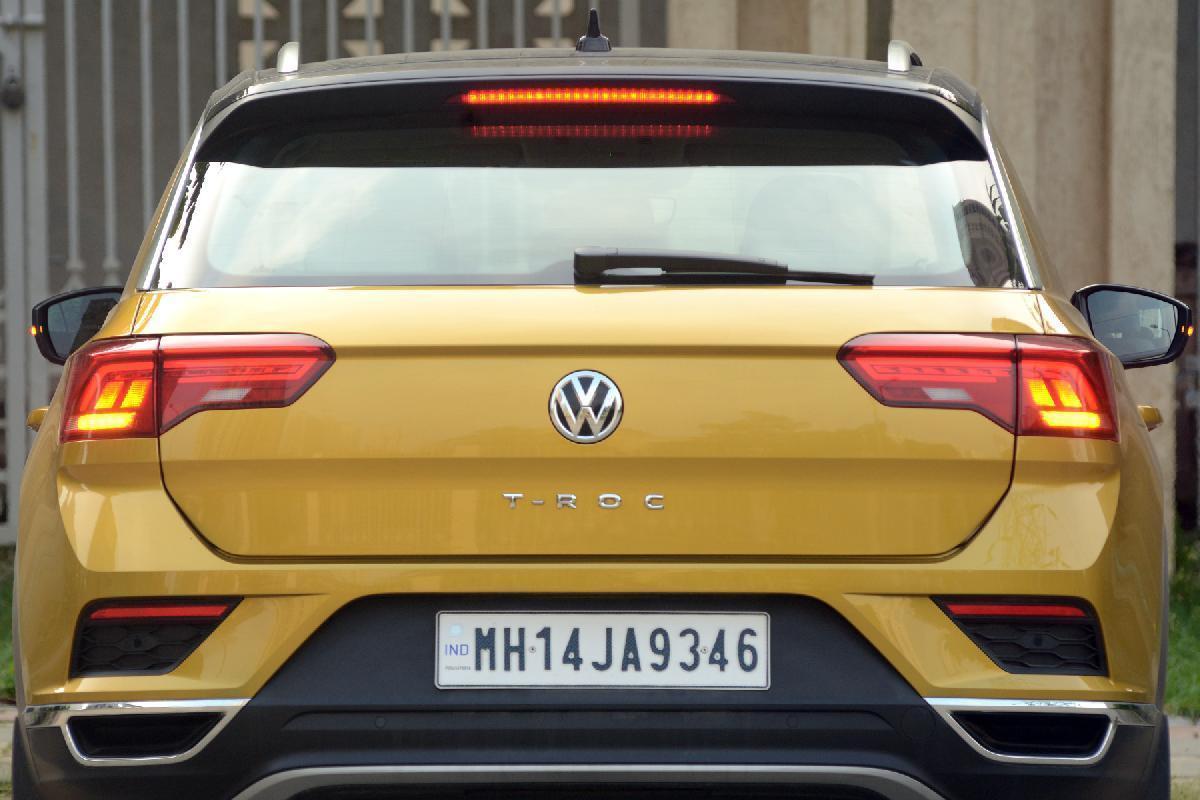 There’s also a large enough boot with 445 liters of boot space for your golf kit. 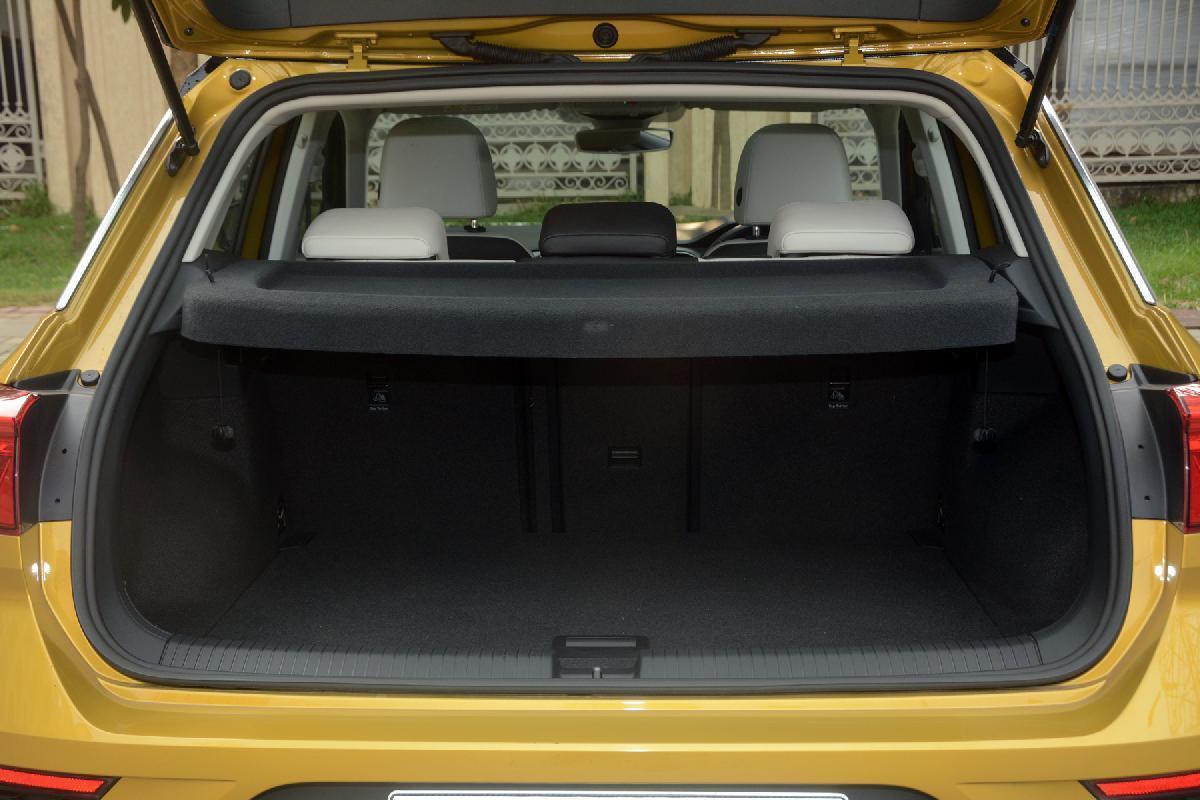 Inside, what you get is a rather avant-garde colour-combination of white and grey leather seats which we really liked and while they do feel a bit stiff, this is hardly the kind of crossover where you’d expect anything fluffy. The dual-tone dashboard is slightly tilted towards the driver and is a clean, non-fussy one with an 8-inch touchscreen and an absolutely gorgeous 10.25-inch digital instrument cluster with some pretty cool tech such as tyre-pressure monitoring system and lane assist to ease your life further. The buttons and knobs feel adequately sized even for those with stubby fingers and the air-con does a good job keeping things cool inside the cabin, also thanks to the dual zone climate control. The steering doesn’t have a zillion buttons but you still have everything you need at your fingertips. It’s just a matter of time before you get the hang of which button doubles up as what. Besides, there is Apple CarPlay and Android Auto and a panoramic sunroof that makes the cabin appear spacious. 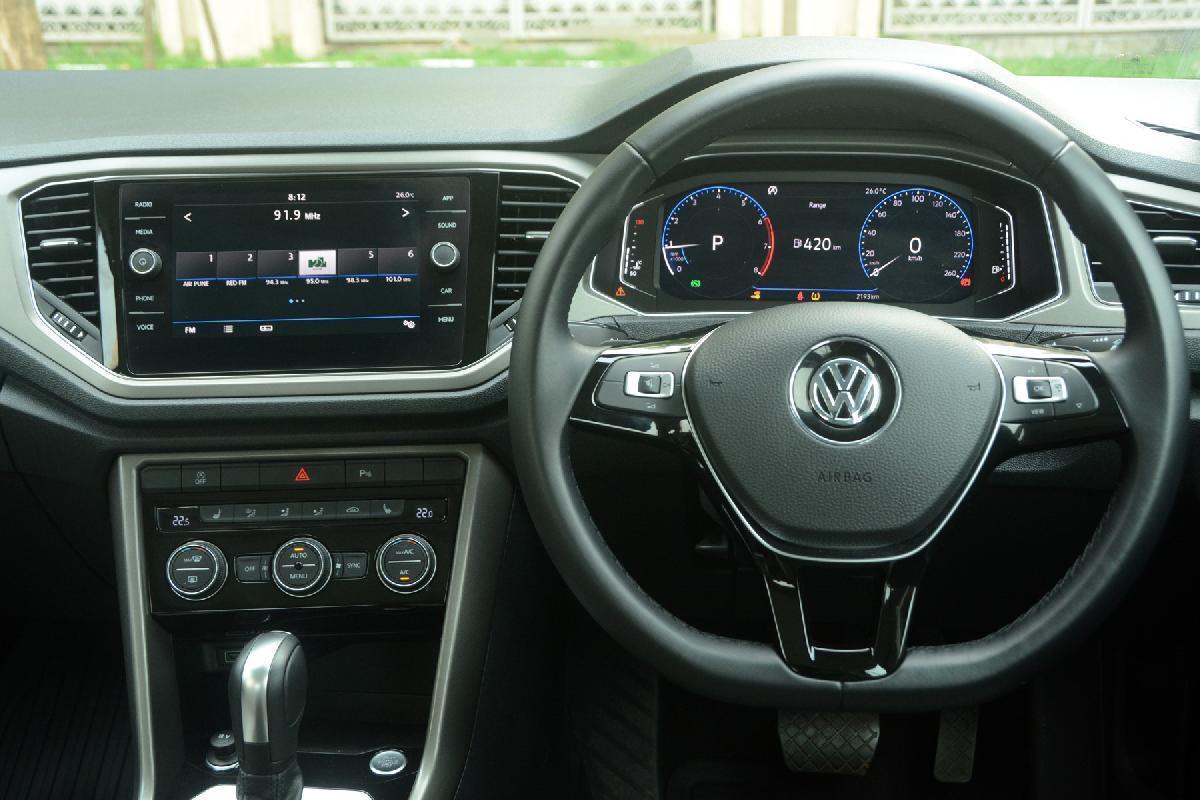 Powering the T-ROC is a 4-cylinder, 1.5-liter (1498cc) turbo petrol mill (TSI) that has been mated to a 7-speed automatic dual-clutch transmission that puts out 147.94bhp@5000-6000rpm and 250 NM of torque @1500-3500rpm. However, the T-ROC comes with a cylinder-management technology which shuts down two cylinders when they’re not required in terms of churning out power, and operates only on two cylinders, thereby helping you drive sensibly and in the process delivering better fuel economy. 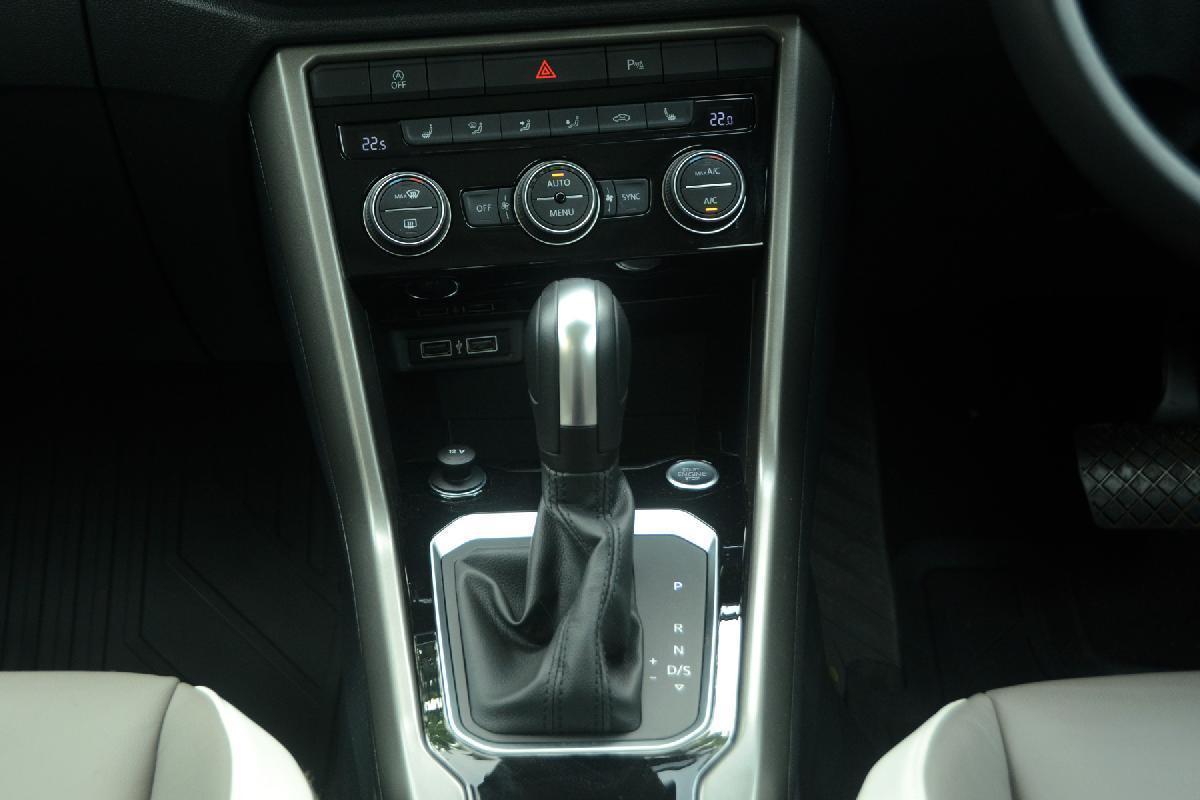 Frankly, what’s not to like about the T-ROC? A torquey DCT gearbox that delivers a very involved driving experience minus any of the bulk traditionally associated with compact SUVs, thanks to the driving dynamics which VW has gotten spot on, especially by keeping the weight of the T-ROC at only 1350 kg. We had a blast driving the T-ROC because not only does it offer excellent overall visibility but also because it has such a responsive engine that a mere tap of the throttle sees it lunging forward eager to unleash all the horses. The T-ROC grips the tarmac firmly and absolutely loves to be pushed to its limits. The chunky steering is great to grip, the gear shifts are smooth and there is barely any outside noise filtering inside the almost whisper quiet cabin. The way the T-ROC dazzles especially at three-digit speeds on the highways is truly phenomenal and not once does it let you panic, offering the solid German stability at all times. 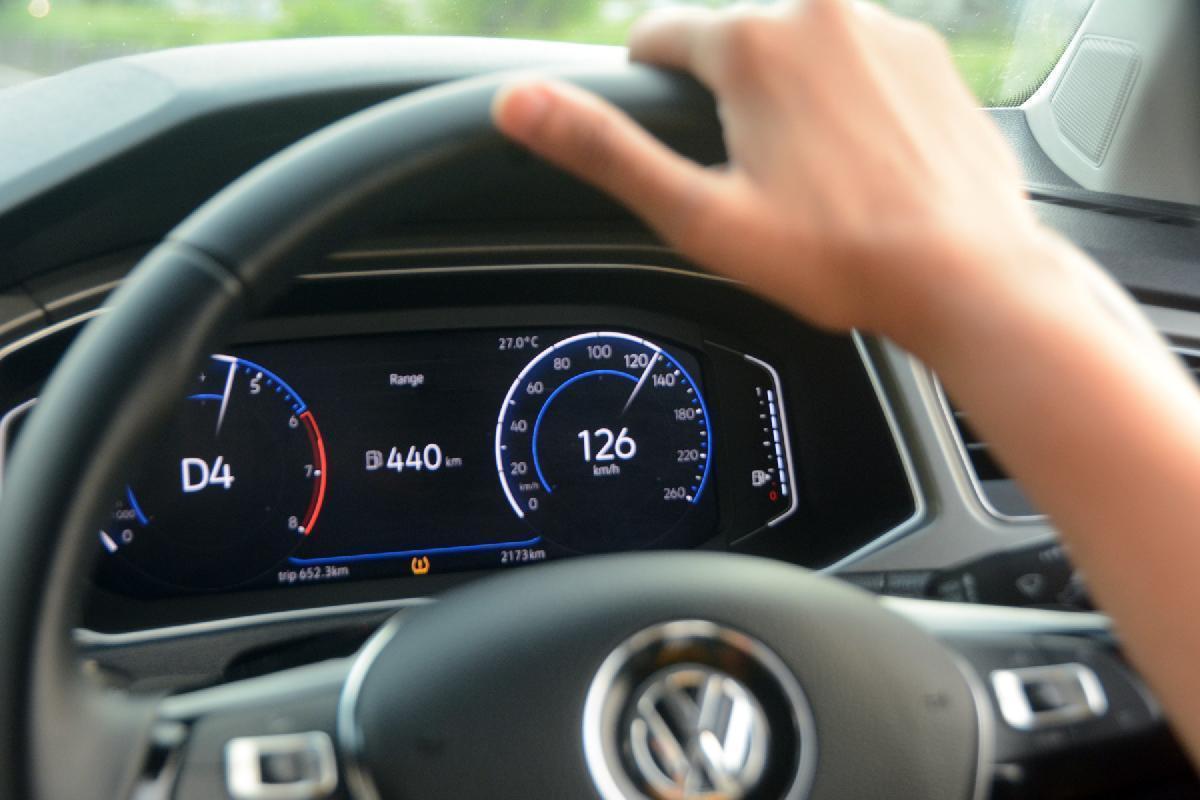 The ground clearance is not bad either but then, we did not test it with four people sitting inside. This is one crossover, we wished was offered as a two-door option. Although, we’re not fans of the two-door option, somehow the T-ROC seems to be a perfect candidate for it on account of the space that it offers inside, not too much but not too little either. Though it does seat five, it is probably best for just you and one more or maybe a third occupant, your golden spaniel, maybe. Besides, it is just the right size for a city such as Mumbai where there are many who may not fancy been driving something as small as a hatch or something as gargantuan as an SUV. The T-ROC sure makes a classy style statement and tells people not just about your taste but also about your station in life. It is the kind of crossover that will bring years of joy to both a young and successful professional or the retired man/woman who can drive it around with a great sense of pride. 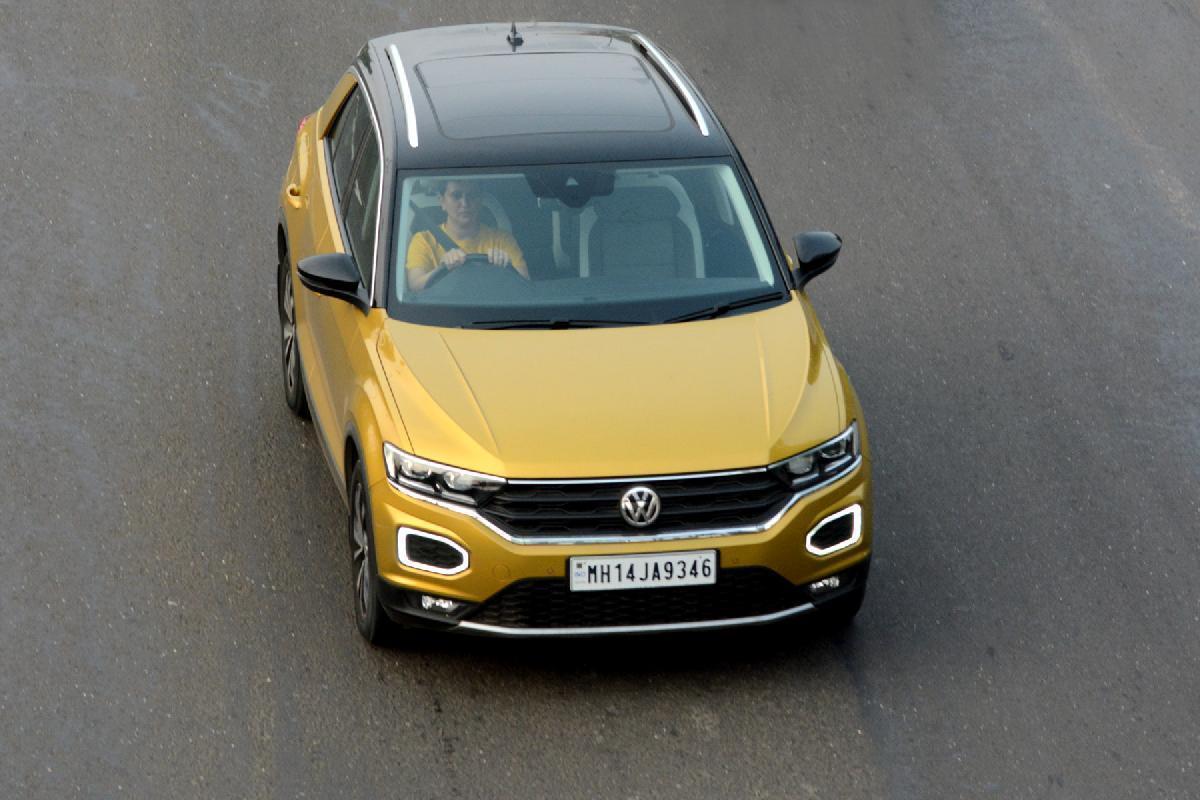 Available in only one variant, VW sold out all the units almost as soon as it was launched at an introductory price of INR 19.99 Lakhs. Are you surprised? Well, you shouldn’t be because that’s just how good the T-ROC is. With 18.4kmpl (ARAI figures) on offer, 6 airbags, ABS, EBD, all four disc-brakes and rear sensors, it is a great buy, especially considering it is a CBU. But now that all the units are sold out, your best bet to acquire one would be to start scouring the used car market, and if you do chance upon one that some current owner has already put on the market and if it happens to be an accident-free one, consider yourself super lucky, because you may have just struck gold.