Advertising across platforms has played a key role in sales picking up in the auto sector. Will it be the magic wand to revive demand?

With the festive season round the corner, auto companies are likely to increase their ad spends to lure customers to loosen their purse strings. Auto companies advertised across platforms in the second quarter of this year and advertising revived across traditional and new media, with the sector’s ranking among top advertisers improving significantly by the start of the third quarter (July-September), industry experts said.

Data from media research firm TAM (Television Audience Measurement) shows that while all platforms saw growth in advertising by the sector in Q2, as compared to April 2020, the trends followed were unique to each media. Aggressive ads did help the sector to revive its sales. Auto sales showed signs of revival in the month of August mainly on back of pent up demand, festive season nearing, and customers concerned about safety preferring to drive their own car and bike rather than using public transport.

Cars category accounted more than 60% of the ad volume share on TV, Print and Radio mediums, where as it added 70% of the ad insertion share on Digital mediums. Total 7 categories were common across all mediums.

Data from media research firm TAM shows that while all platforms saw growth in advertising by the sector in Q2 as compared to April 2020, the trends followed were unique to each media. Radio saw consistent month-on-month growth in ad volumes by auto brands over April 2020, with a massive spurt in June. Volumes of auto brand ads grew 4.5 times in May over April, 19 times in June (over April), and 20 times in July (over April).

Eight among top 10 Categories were common between TV and print and accounted for more than 80% share of ad volumes on each platform. Cars (67% share on TV and 61% share in print) was the top category on both platforms, followed by two-wheelers (20% on both platforms). Other common categories included corporate auto, tractors, commercial vehicles, and tyres.

Cars (Four wheelers?) category accounted for more than 60% of the ad volume share on TV, print and radio mediums, where as it added 70% of the ad insertion share on digital mediums. Total 7 categories were common across all mediums and two wheelers category stood at 2nd position on traditional mediums.

On TV, news, movies, and general entertainment channels (GECs) were the most preferred genres, accounting for nearly 85% of total ad insertions. News bulletins were the most popular programmes, with 41% of TV ad insertions happening on these, followed by feature films and interviews/discussion format shows. Prime time (6pm to 10.59 pm) was the most popular band for auto advertising on TV accounting for 41% share. The 30 second TVC still seems popular, at least among the auto brands as the most preferred ad duration was 20 to 40 seconds. 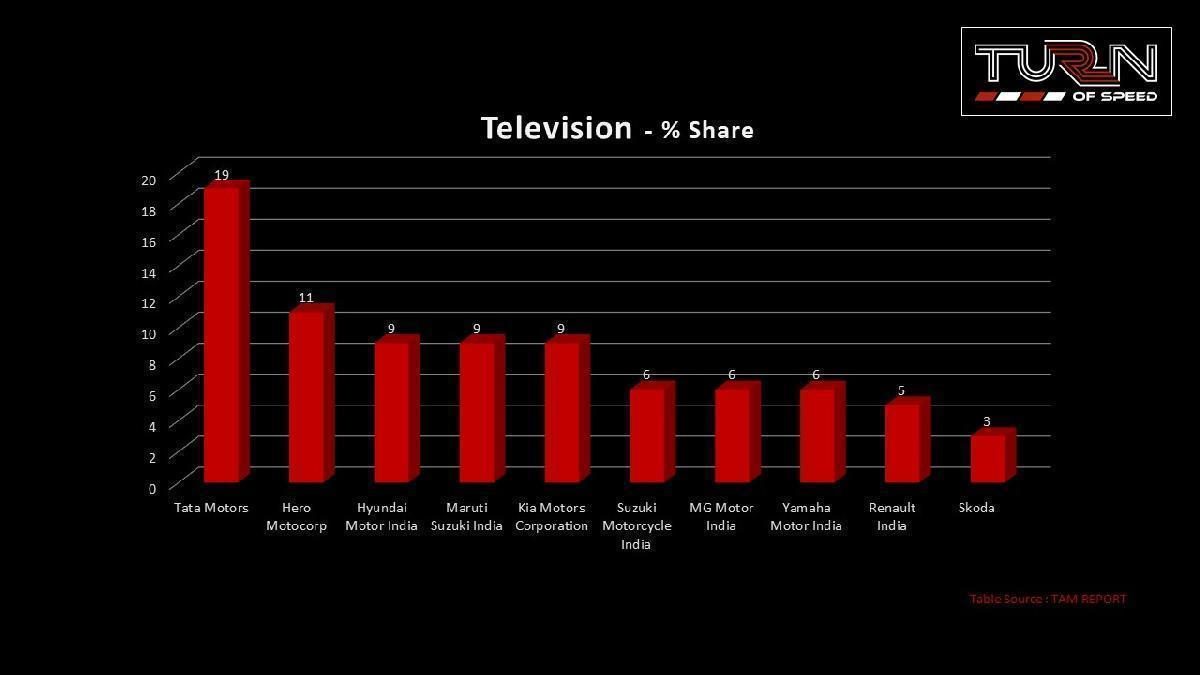 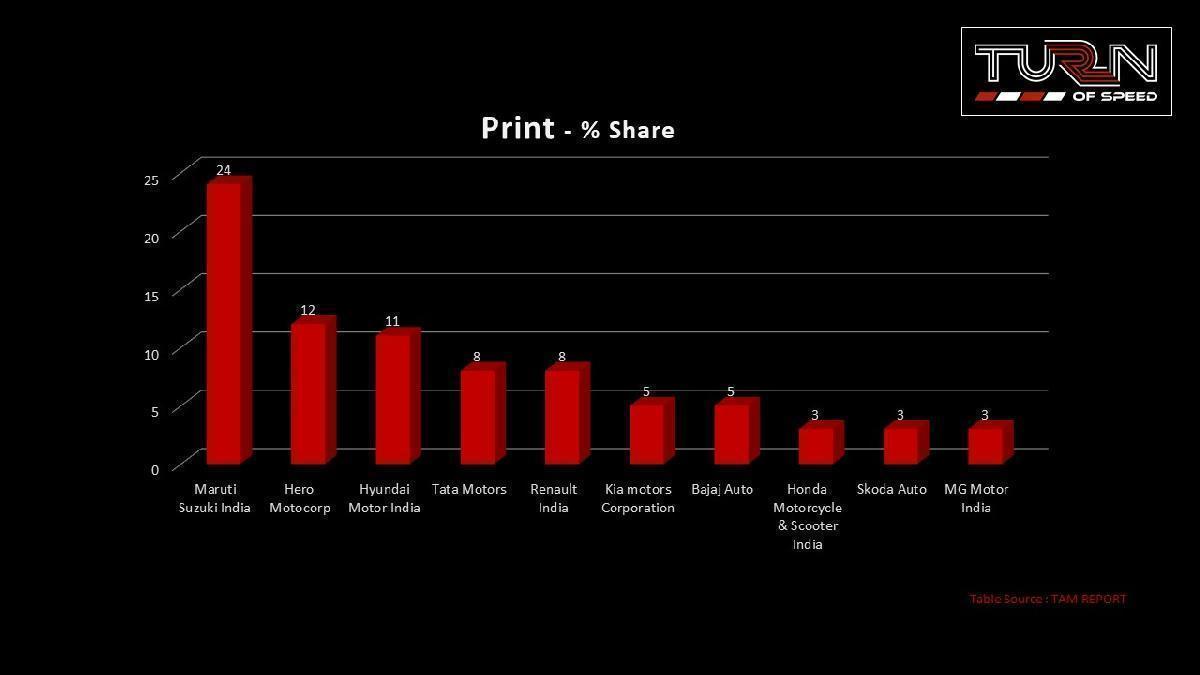 In case of print, 57% of auto sector ads were in Hindi and English publications during the April-July period. General Interest publication genre had 99% share of ad volume and business, finance, economy had the remaining 1% share.

On radio, more than 50%  of auto sector’s ad volumes was contributed by top 4 states - Gujarat, Uttar Pradesh, Maharashtra and Andhra Pradesh. Gujarat led the charts with 23% share. The evening and morning time bands together added 75% share of ad volumes with 34% and 41%, respectively.

On digital, programmatic transaction method captured 34% share of ad insertions for the auto sector. Radio, saw consistent month on month growth in ad volumes, though the major spike in at the start of Q3. July saw auto sector advertising grow 7 times as compared to April 2020.

Top 10 Advertisers of Auto for Radio and Digital 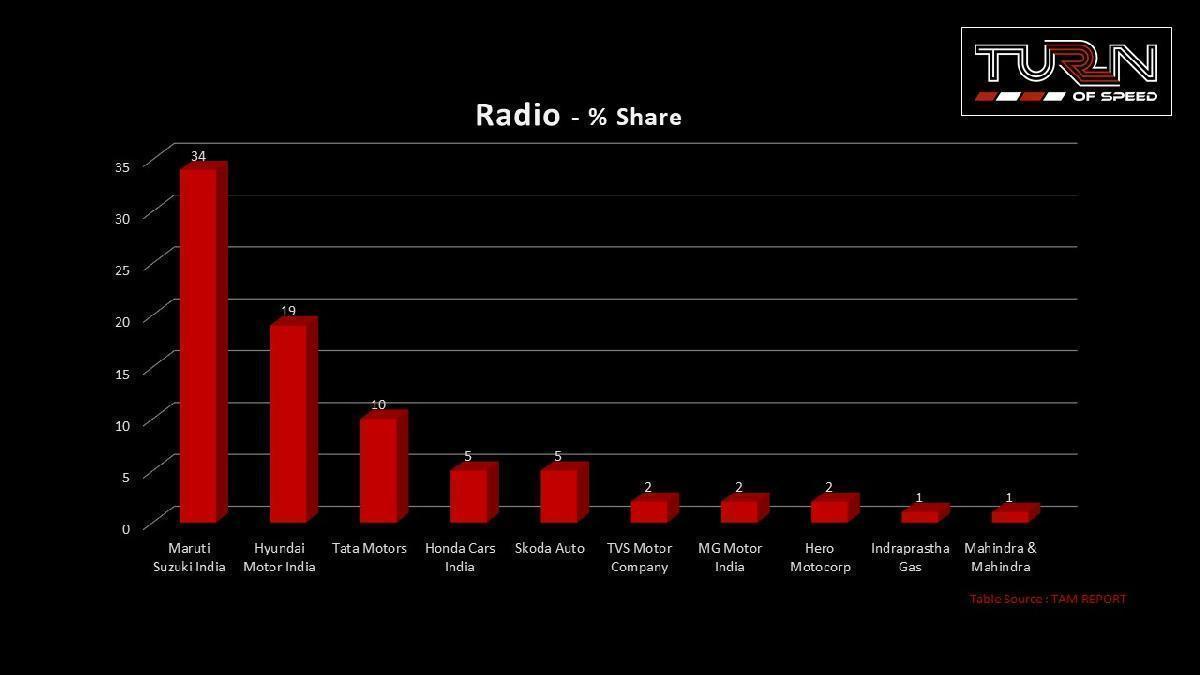 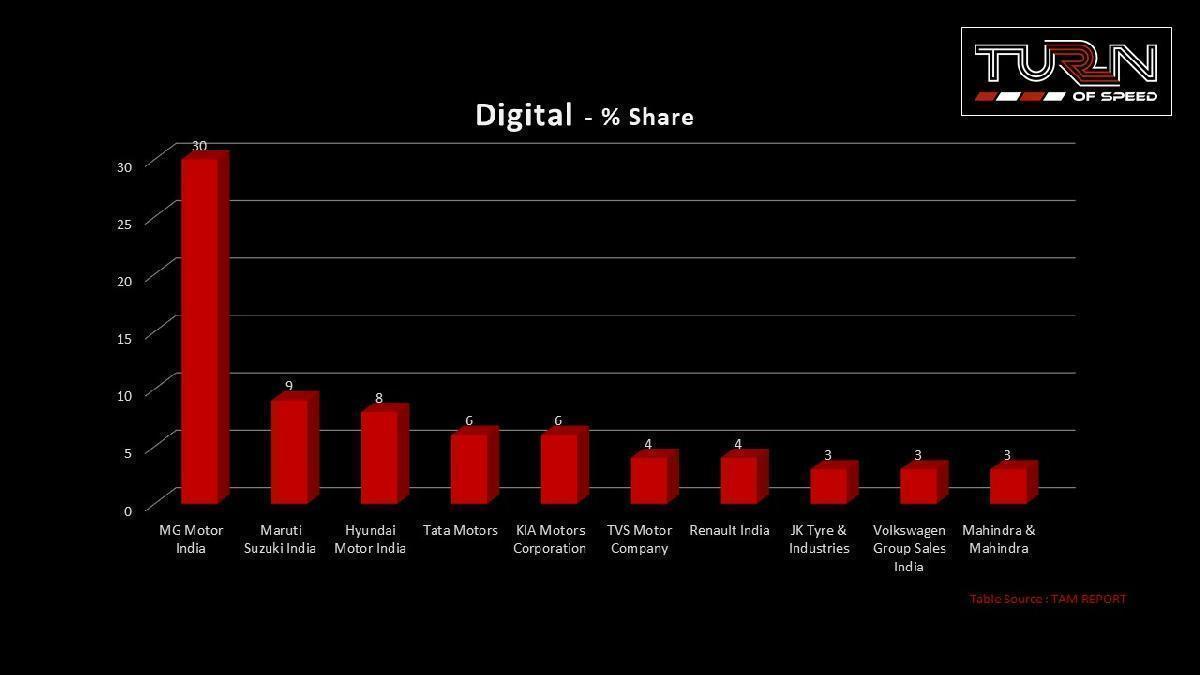 Rajesh Goel, Sr. vice president and director, marketing and sales, Honda Cars India Ltd said, “A quarter into the unlock phase, we are progressing as per our plan, both in terms of supply and demand registering a sequential growth of 39% over July’20. As we ramp up our daily production to 100% pre-COVID level this month, we are optimistic about the upcoming festive period and expect demand to improve further. However, considering that COVID-19 cases are constantly on a rise, we need to continuously monitor overall buying sentiment and its impact on auto sales going forward.”