Audi India lined up their superlative RS5 Sportback, RS Q8, S5 Sportback, and the e-tron at the Buddh International Circuit (BIC) recently and driving their RS models has left us in a trance of sorts.

Recently, Audi India, invited us to the Audi Experience Performance Weekends to drive some of their fast cars on the racetrack at the Buddh International Circuit (BIC), in Greater Noida, and we haven’t stopped grinning since. The Audi India line up for the event included the RS5 Sportback, RS Q8, S5 Sportback, and the e-tron. Needless to say, we made the most of the opportunity – driving those super exciting Quattro speed machines, on the racetrack, setting new personal speed records – while grappling with that headrush feeling!

The day began with a quick briefing from the Experts, who familiarized us with the 5.3 km racetrack since it had been a while since some of us had last driven here. After giving us instructions about braking, overtaking, and other things such as using the radio, it was followed by a short checklist of dos and don’ts while on the racetrack. Next, we were divided into batches based on the color of our wristbands, after which we set off to drive our respective cars. While some headed to the racetrack, we headed towards a specially designated area that Audi India, had created within BIC, for a full-blown slalom experience, and that’s where we kicked off our Audi drive, in the e-tron, on that beautiful Sunday morning! 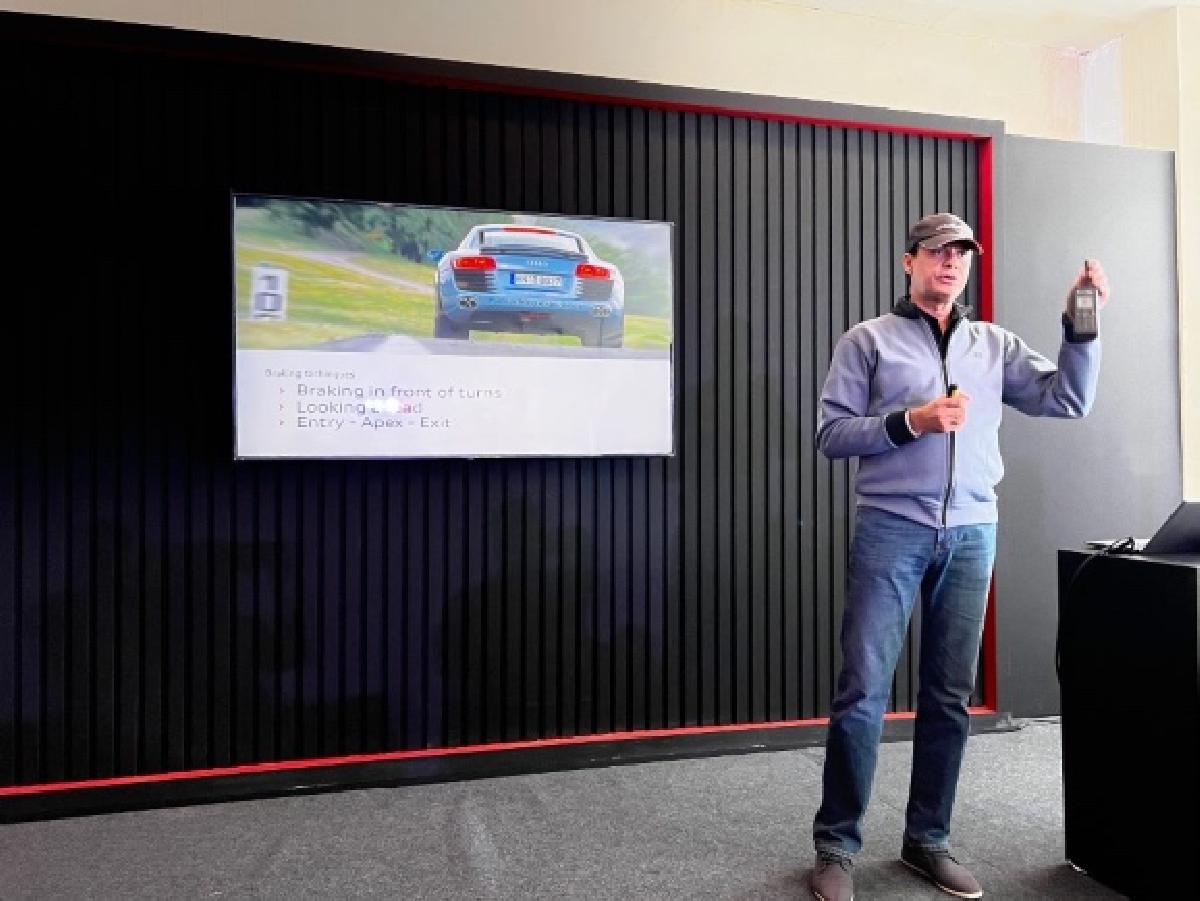 The slalom course was a very good one and included a mixed bag of twisties and straight stretches, and after a couple of quick rounds to get a hang of the course, it was time to drive the e-tron through the strategically placed cones on the course. It was pedal to metal from the word “Go.” With the slalom course starting us off with a few zig-zag turns, we were immediately able to experience the e-tron’s maneuverability in the best possible manner. The e-tron was up for everything that the slalom course threw at it and it darted through every corner in the most agile manner and took on the straight stretches brilliantly. The only sound that we occasionally heard was that of screeching tires, especially while tackling those zig-zag turns, but the steering was accurate and the e-tron continued to dazzle us with its performance, cutting through air like a knife, despite its body type. And immediately after a series of crazy winding turns, the e-tron, tore down the straight stretch and right through to the finish line maintaining perfect composure. Some amount of body roll was experienced, but frankly, it was negligible… easily overlooked, considering the e-tron’s performance in every other department was nothing short of stellar! Even the air-conditioning kept us absolutely cool inside, while the e-tron soldiered on, performing its duties magnificently, under the unforgiving, blazing afternoon sun. 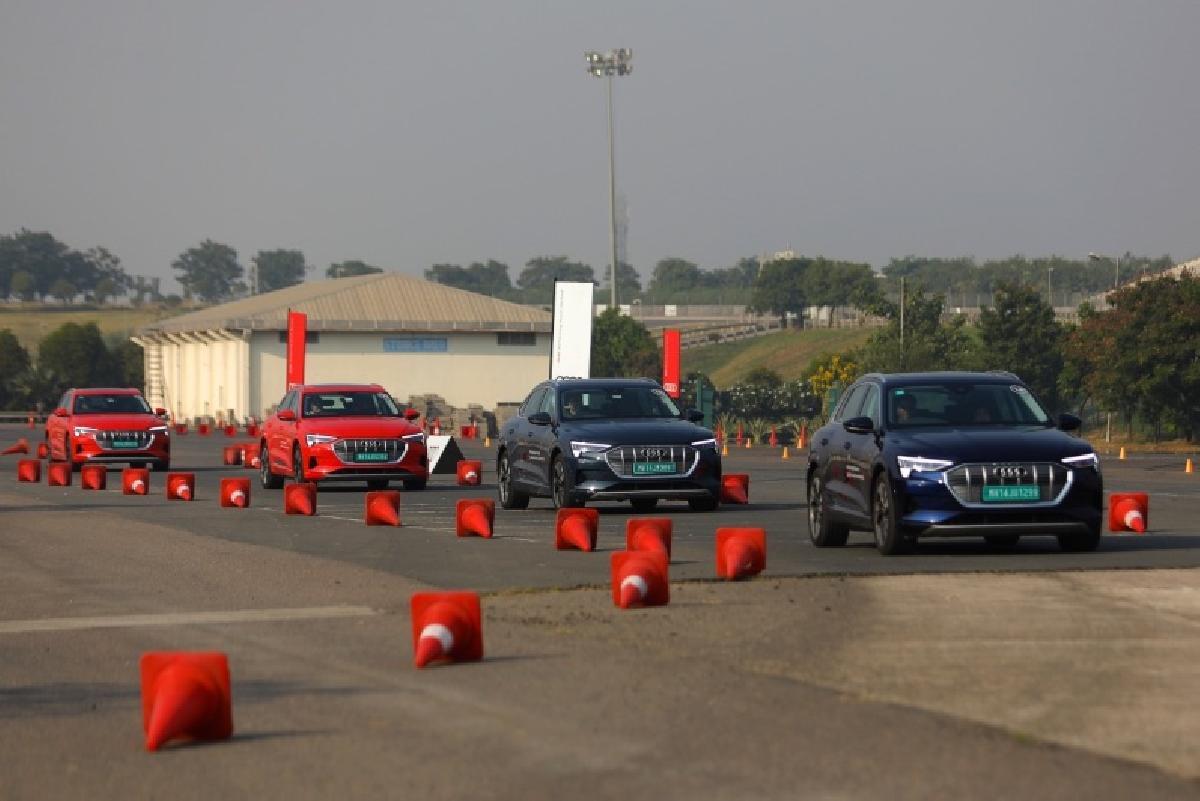 Next, after putting on our balaclavas, followed by our helmets it was time to get behind the brilliant and sophisticated wheel of the RS5 Sportback and we couldn’t help but choose the gorgeous ‘Tango Red’! As most of you may well be aware that the RS5 happens to be one of the finest offerings from the Audi stables and therefore, driving it on this racetrack was undoubtedly going to be an unforgettable experience.

The driving program had been designed in a manner to take us around the racetrack with a mix of ‘flying laps’ or ‘hot laps’ followed by the ‘in lap’ or the ‘cool down lap’ after which we bring our respective cars back to the pit lane. The cool down laps are vital for cooling down the brakes which are usually fiery hot after all the high-speed driving that we do on the racetracks, and more importantly, to ensure that the brakes don’t crack after such high-speed driving on the racetrack.

We started by driving the Audi RS5 on the 5.3 km BIC racetrack and soon enough we were not only tackling corner upon corner at triple digit speeds but also attempting overtakes of the car ahead of us on all of the three high speed straights. Knowing precisely when a fast corner is coming up is something that you have to really keep an eye out for, while driving fast on the racetrack. Besides, staying focused, as well as maintaining a healthy distance from the car ahead of you are also key factors especially when there are other cars being driven as fast or faster on that very racetrack. Deviating from the racing line is easy, and can happen to the best of drivers. One moment you’re on the racetrack and the next moment, your car has slid onto the run-off area, right into the gravel trap, and, in the unfortunate event of that happening to any of the cars on the racetrack, the red flag begins flashing, which indicates that all drivers are expected to halt driving immediately and return to the pit area and start all over again. So, you’ve really got to watch out for those “danger zones.” The Audi RS5 which is a 450 hp, 3.9 second car, offered loads of fun thanks to the 600 Nm of max torque, and it felt extremely stable at all times, making us feel supremely confident to push it even further. This is truly that sportback (Besides the Audi S7, but of course) that you can never really have enough of. 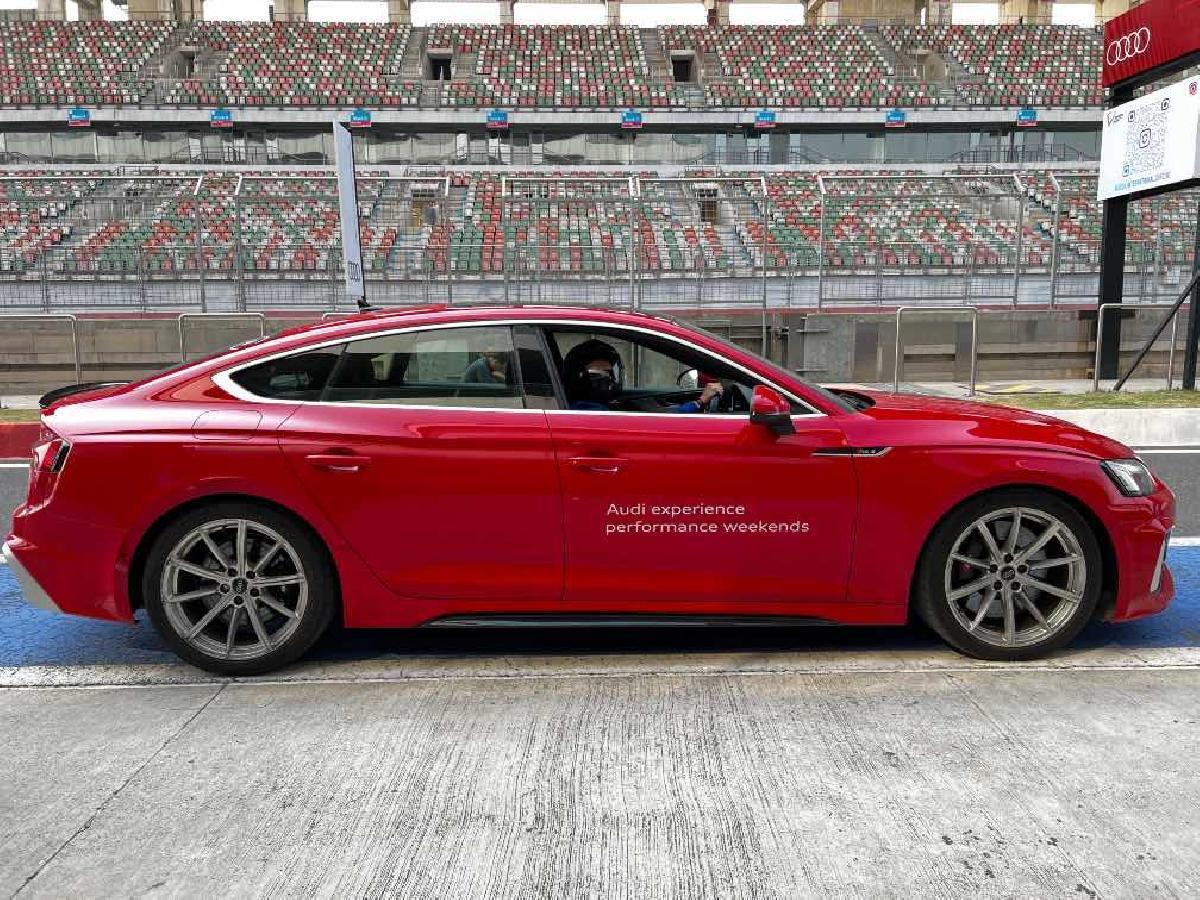 And as is always the case, all good things come to an end sooner than we like, and that is precisely what happened to our time with the Audi RS5 at the BIC racetrack. Before we knew it, our hot laps were over, and we were onto our ‘cool lap’ – vital for cooling down the brakes that get fiery hot on the racetracks and also to ensure that the brakes don’t crack after such high-speed driving. It was now time to head back to the pit lane and swap cars.

The fact that Audi had brought in some very colourful cars onto the racetrack further elevated the fun factor, livening up our performance drive even more. 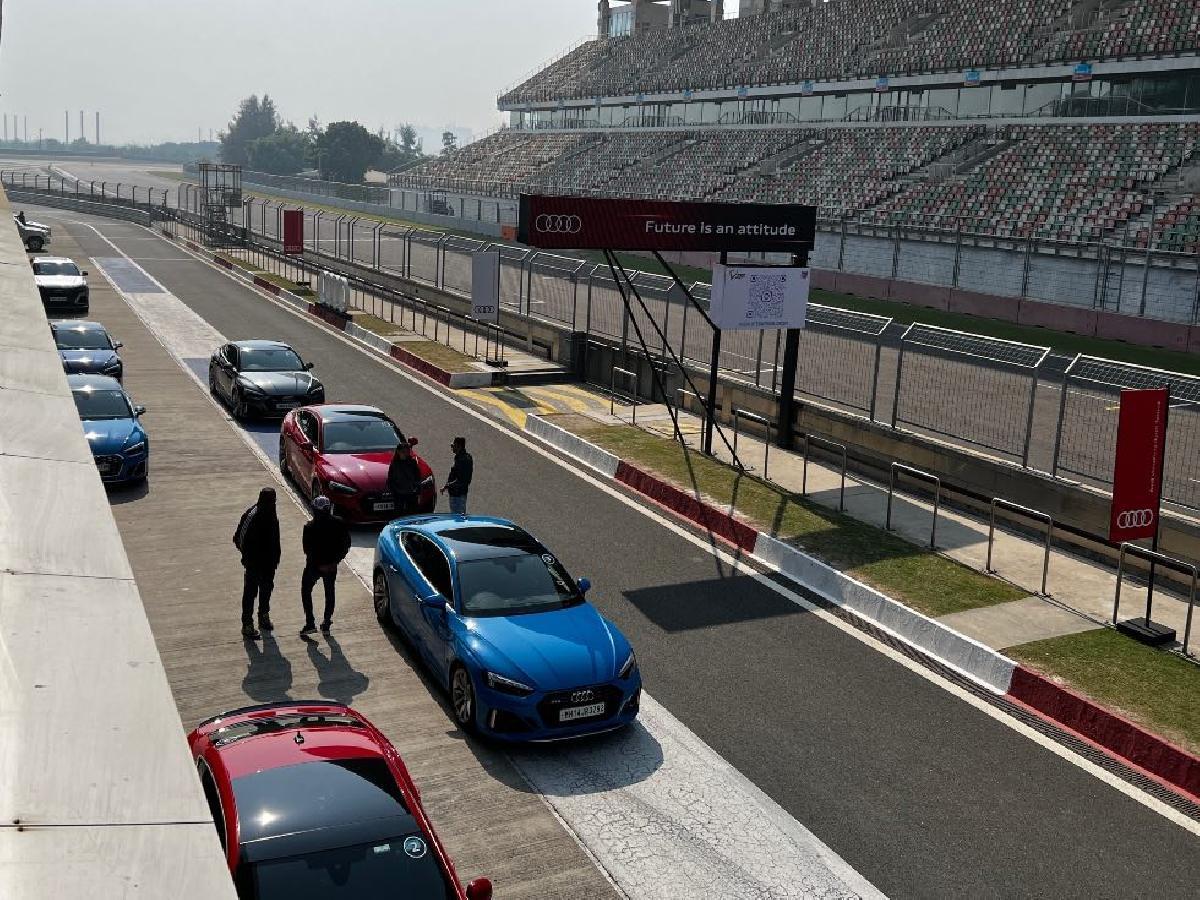 Next, it was time to drive the Audi RS Q8 – a 3.8 second SUV that we had been really been looking forward to driving on account of it being counted amongst the fastest SUVs in the world! The RS Q8 with 600 hp and 800 Nm of max torque was a hoot to drive. Soon enough, we were on the racetrack again, repeating the drill, driving around the 15 corners of the BIC’s racetrack as fast as we could, ensuring that we were in complete control of the SUV at all times. 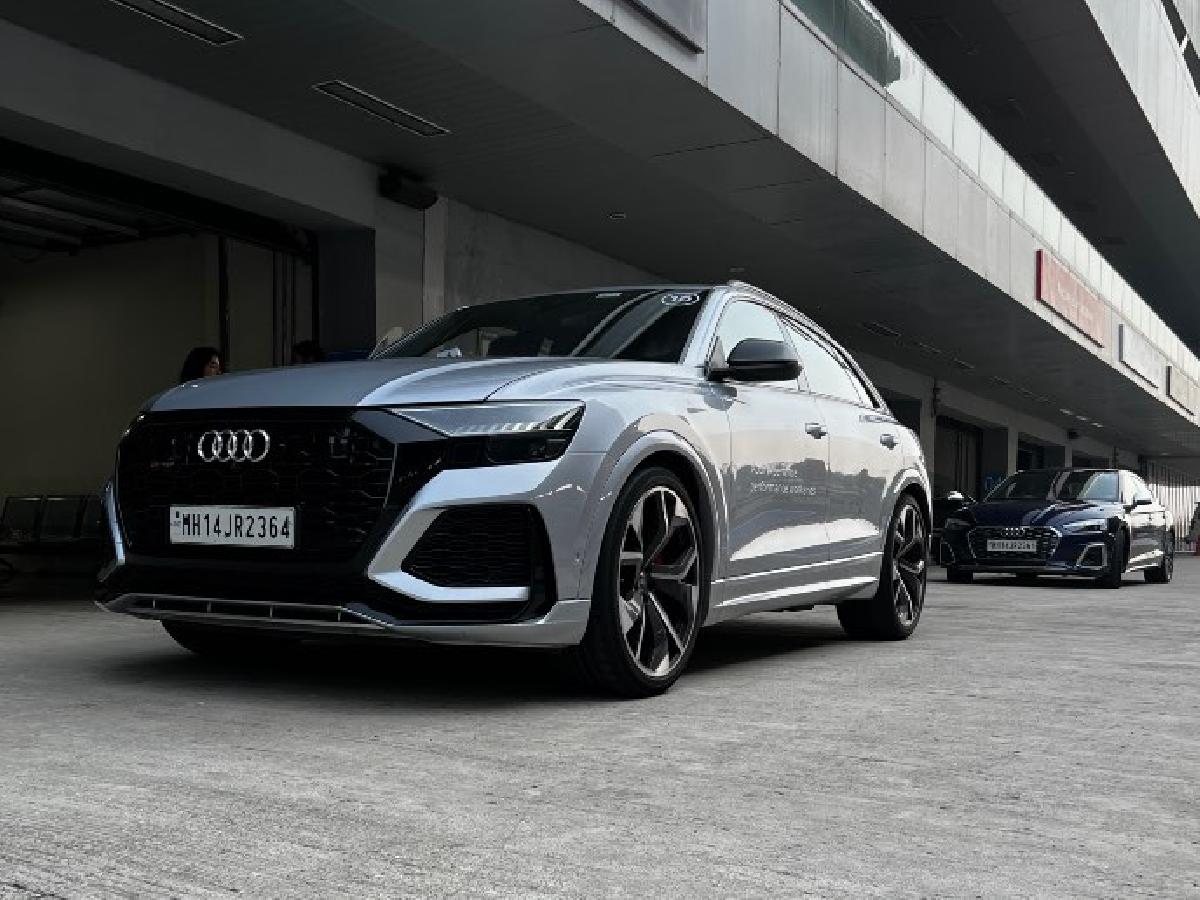 What made driving the Audi RS5 and the RSQ8 at the BIC racetrack really memorable was that it gave us an opportunity to get behind the wheel of two different body types to experience the thrill of driving these performance cars really fast, back-to-back, while gauging their track abilities at really high speeds, something that is not possible to do in our day-to-day city driving conditions. And because we’re big sportback fans, we truly enjoyed the RS5 experience a bit more! Also, we felt that the sportback, just happens to be a better-suited car for a racetrack experience as compared to an SUV. Not that we didn’t enjoy getting behind the wheel of the RS Q8 and driving it on the racetrack, but it’s just that, the way the RS5 gripped the tarmac and the way it performed, on straight stretches as well as at the corners, so eagerly and so nimbly, just made us appreciate its litheness that much more. And of course, music to our ears was not just the screeching sounds of tires but the sound of the exhaust notes as well. That was also the highlight of this track day, not just watching but also listening to the sounds of these high-performance cars whizzing past, when we weren’t behind the wheel.

The Audi Experience Performance Weekends at BIC was indeed a great way to spend our Sunday and it really isn’t an exaggeration when we say that the cars on the racetrack catapulted us into another world altogether. Audi India, we simply can’t wait to drive your other models...what car are you sending us next, please?