In a league of its own

The e-tron 55 quattro is a stellar offering from Audi and the wait has undoubtedly been well worth it.

Audi India is beginning its electric journey in India with the much-awaited e-tron which is all about noiseless and emission-free driving. Will India warm up to this luxury EV that costs upwards of a Crore? We took the e-tron 55 quattro variant for a spin and here’s what we think about it. 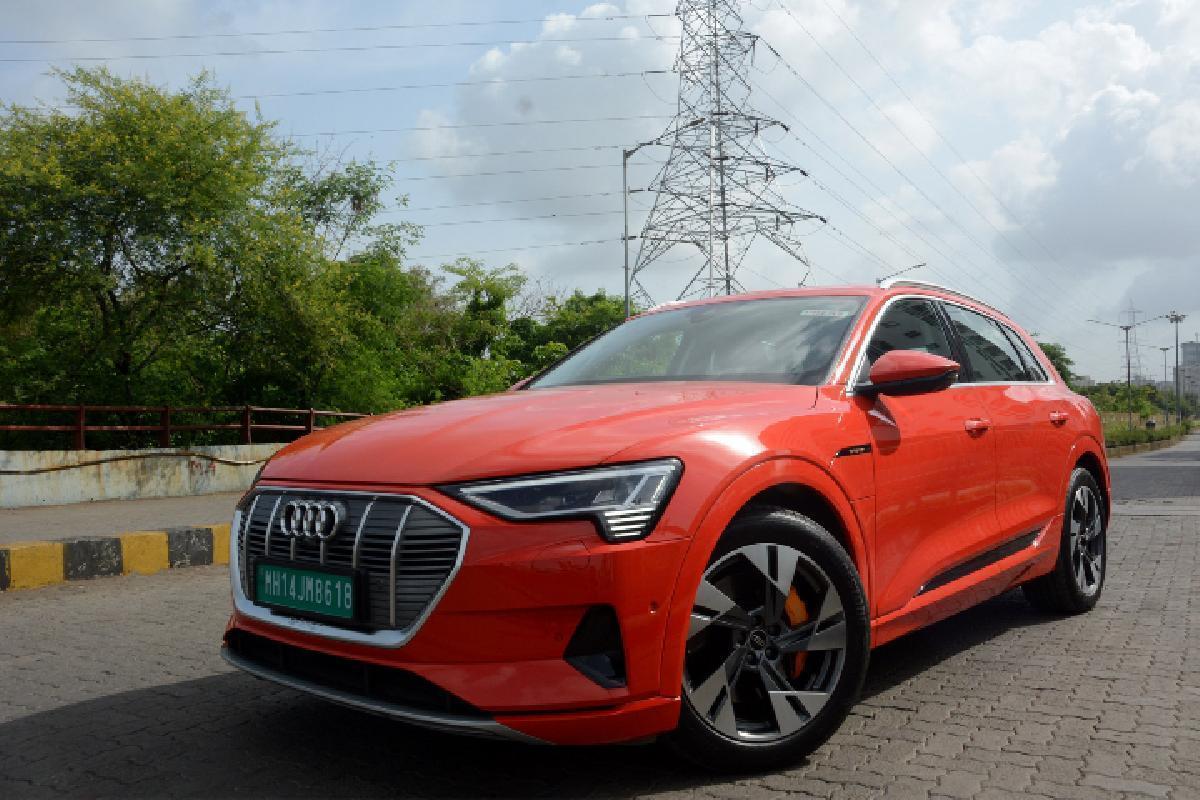 Look at the e-tron from the outside and you’ll feel as if Audi has gone to great lengths to ensure that there is nothing radical about the e-tron’s outward appearance. Quite frankly, it is not very different looking from one of their larger SUVs such as the Q7, for instance. In fact, the idea, all along, has been to ensure that you feel right at home in the new e-tron and on that front, full points to Audi for a job remarkably well done. The family resemblance is unmistakable, and barring a few obvious changes such as the grey grille, the short slats that sit below the DRLs and those bright orange brake calipers (which draw inspiration from high voltage wires) that give the e-tron its distinct EV look, you’d be hard pressed to distinguish between this EV and one of Audi’s conventional ICE SUV offerings. While the massive 20-inch wheels do add the extra SUV appeal, it is in fact the charging socket that can be opened with the press of a button and the green number plates that don’t let you forget that this is a green luxury SUV. 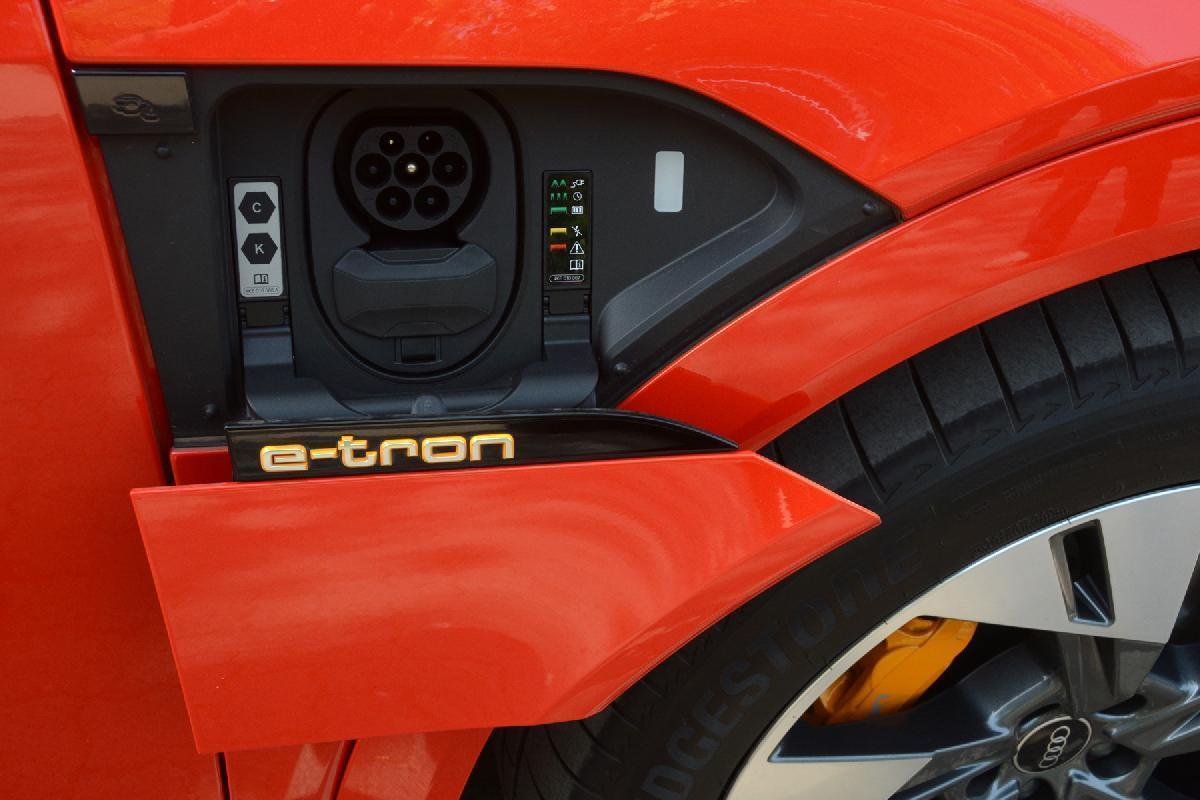 Inside, what you get is that familiar Audi feeling. The e-tron’s cabin feels plush and luxurious and uses some of the finest materials such as leather, resin and brushed aluminum which elevates the overall quality to a whole new level, giving it a very elegant feel. The dashboard which gets some sharp cuts, is angled more towards the driver.

The e-tron’s design is both, clever and functional, and this is evident from both the small touches as well as the big technological goodies that have been fitted onto the EV. For instance, what seems like a little crevice in the console, actually serves as a phone charger and then there is that gorgeous Head-Up display, a feature that we’ve come to love on luxury cars over the years. The dual 10.1-inch MMI screens gives the e-tron a very sophisticated and luxurious look and the 8.6-inch virtual cockpit gives the driver all the information s/he needs in a very crisp manner. 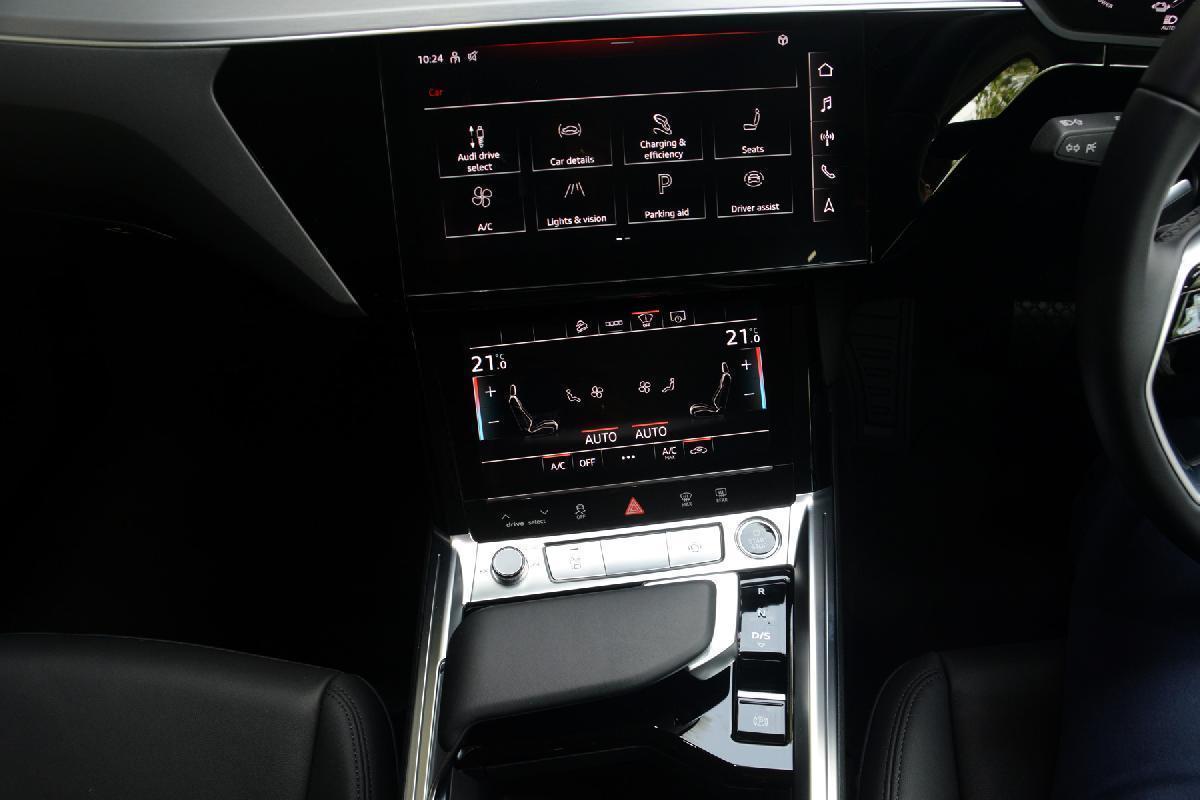 The centre console is well laid out and also comes with plenty of space for your knick-knacks. Audio junkies can make the most of the 16-speaker Bang & Olufsen system which sounds absolutely divine. There is a lot of leg, shoulder and headroom inside the e-tron which allows all the occupants to truly travel in great comfort and style. 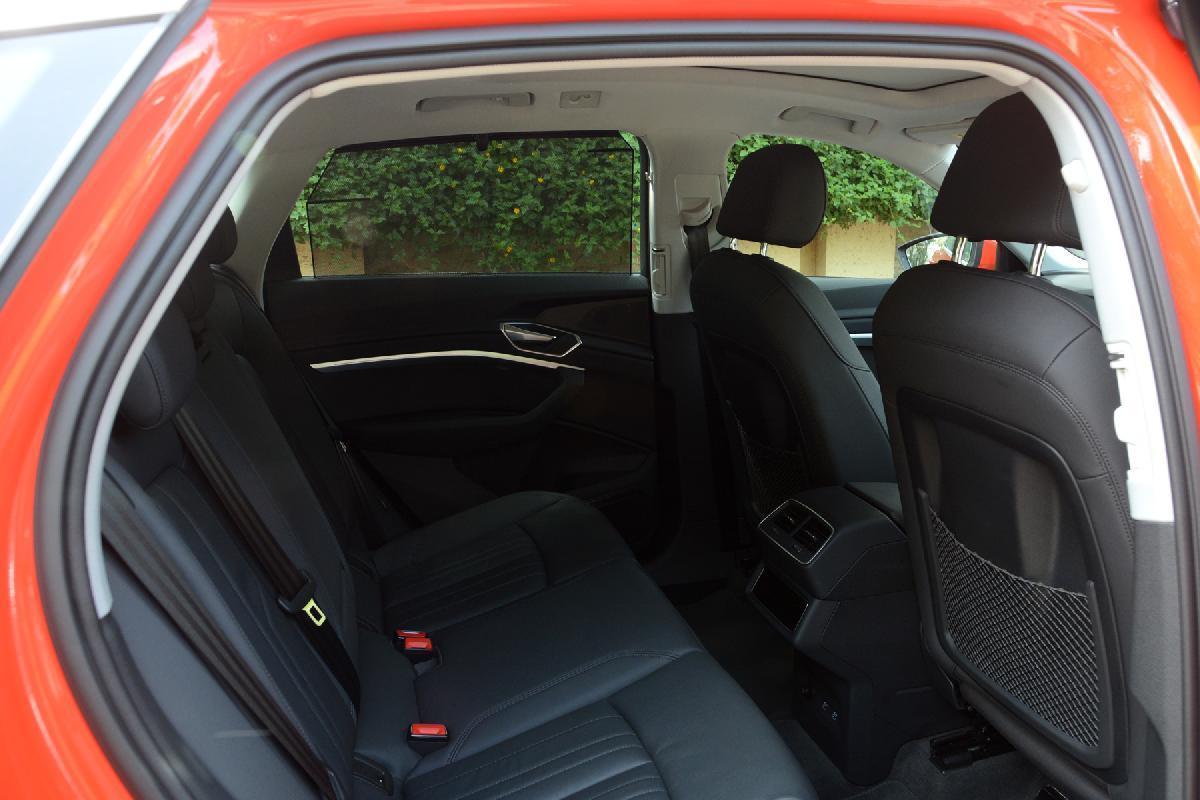 There is also the big panoramic sun roof that gives the cabin an even more spacious feeling. Also, the e-tron gets a small cavity, up front, in the engine bay where you can carry a few small articles and a whopping 660 liters of boot space to accomodate not just the donut tyre but also your surf board for when the surf’s up. 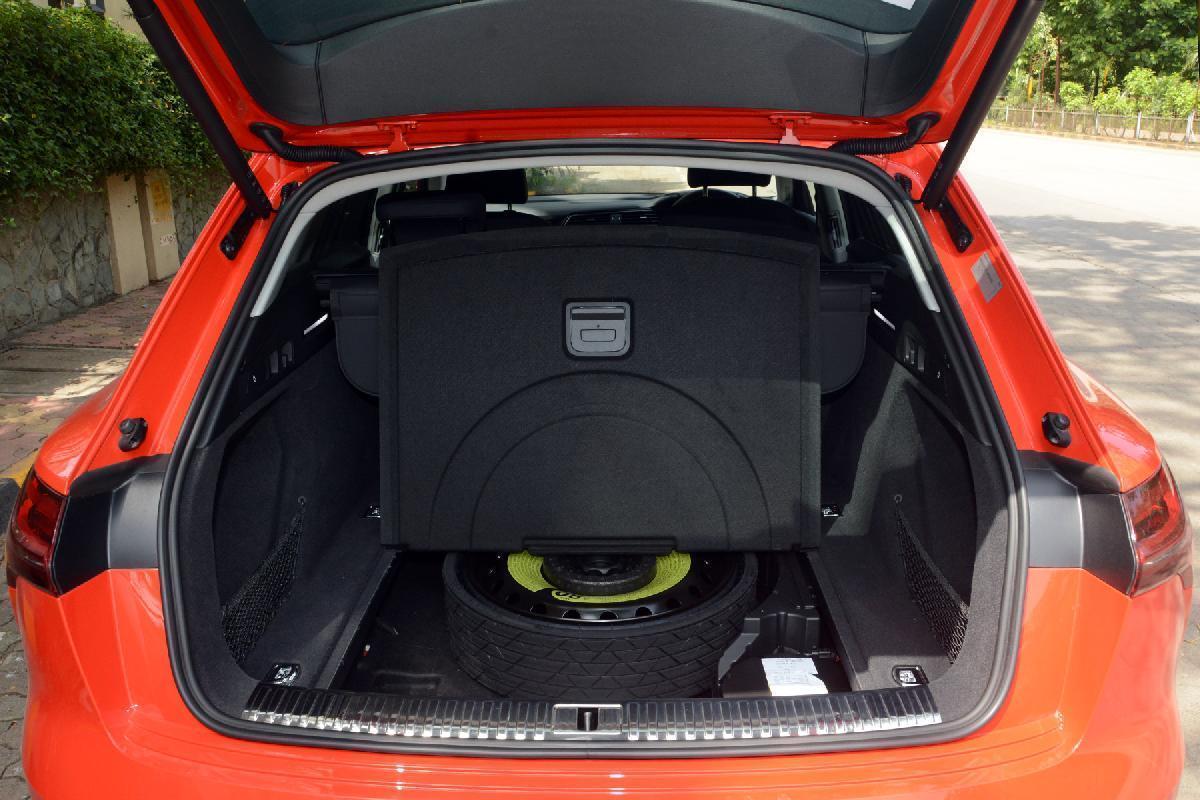 Powered by electric motors at the front and at the rear, the e-tron 55 comes with a 95kW Li-On battery that enables a 359-484 range (WLTP). Charging can be done via a 11 kW AC wall mounted charger that takes around eight hours to charge your e-tron or you could opt to do it via a Fast Charger in almost half the time. While that is a fairly good range, you still have to watch your driving habits so that you don’t end up draining the battery quickly. Can you take it to nearby places such as Lonavala? Yes and No. Yes, if after checking Google Maps to see if there isn’t much traffic on the roads, and no, if there is a bad traffic jam ahead which means you will only be sitting in traffic getting anxious about your battery which isn’t a particularly pleasant situation to find yourself in, especially if there aren’t any charging stations in the nearby vicinity. Of course, this is only a worst-case scenario but otherwise, you should be just fine with the e-tron as long as you set out with a full charge. 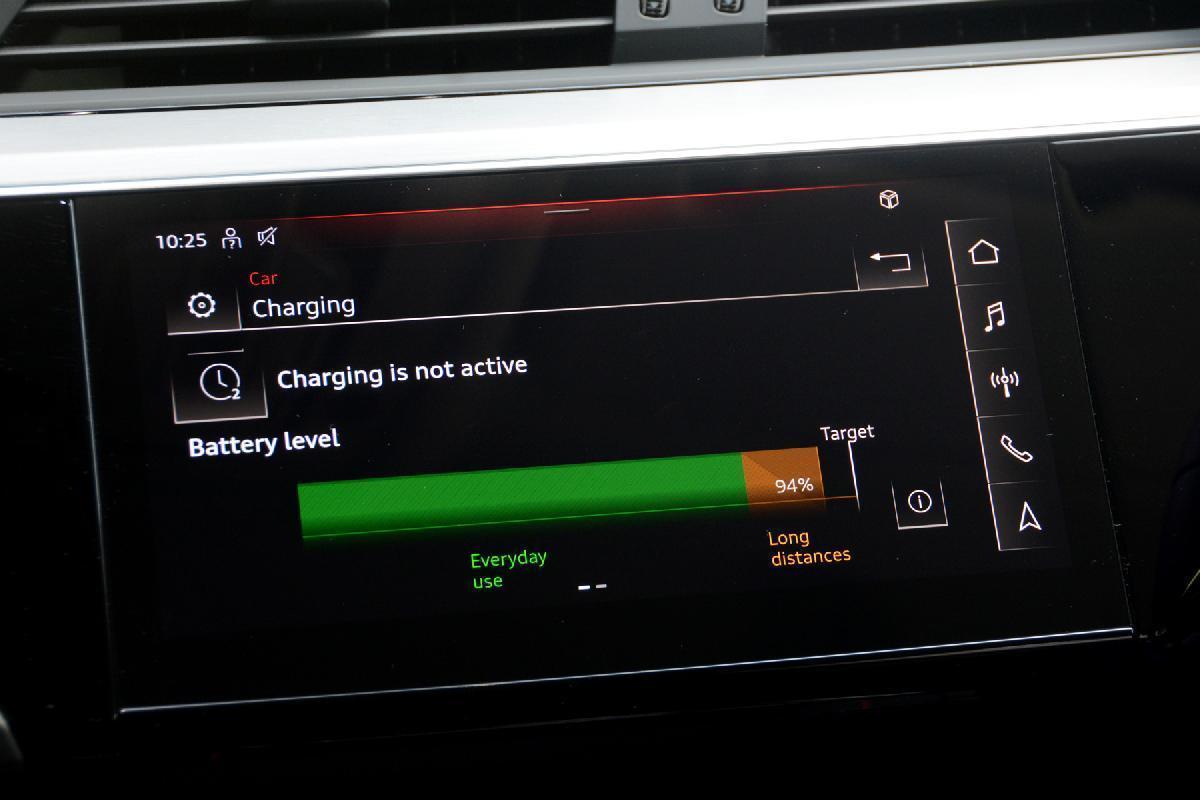 One remarkable thing about the e-tron’s technology according to Audi engineers is that “the electric machine, is completely packed with water” which means that your e-tron will not heat up and consequently pack up, so that’s a big plus which truly should make owning and driving the e-tron a truly sublime experience. 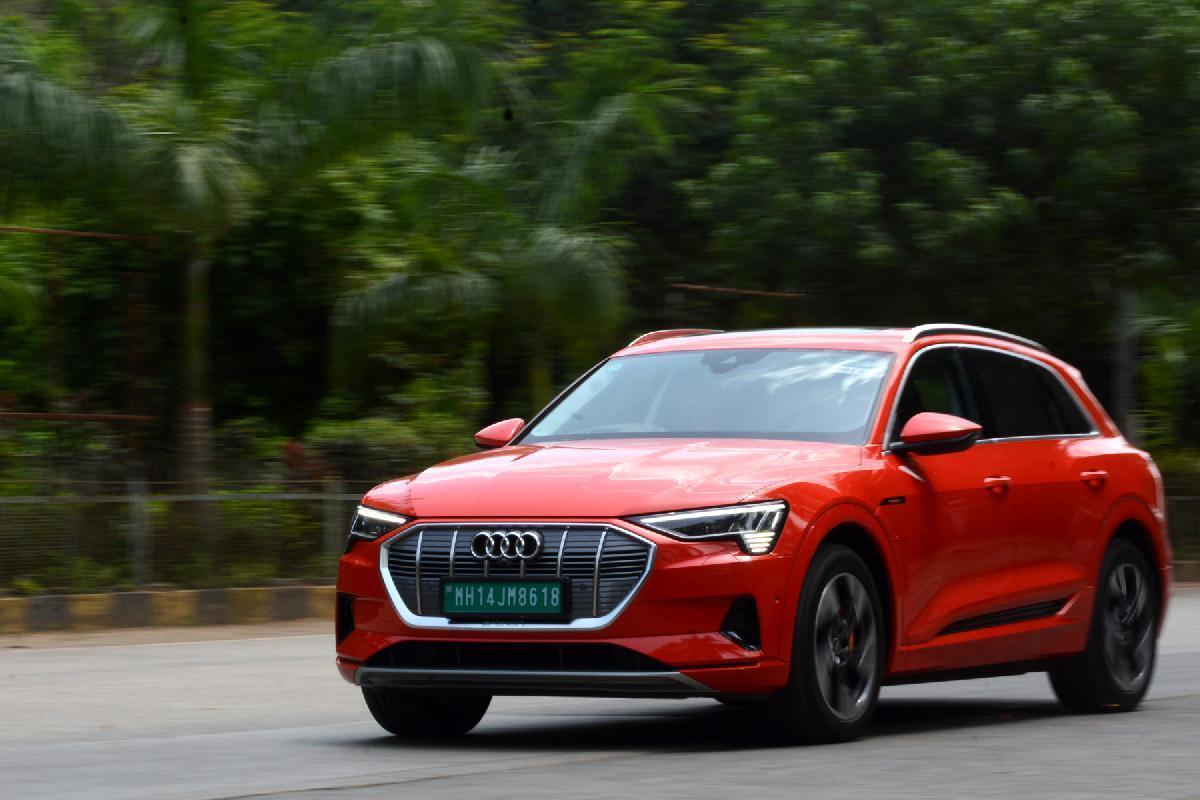 The e-tron which churns out combined power of 300kW is capable of 0-100 in 5.7 seconds which seriously makes it a lot of fun, especially considering this is a 2.6 tonne SUV, which frankly feels more like a sports car especially in the way it accelerates. While the e-tron’s progressive steering is accurate, it doesn’t offer much feedback, however, it does weigh up well at high speeds. 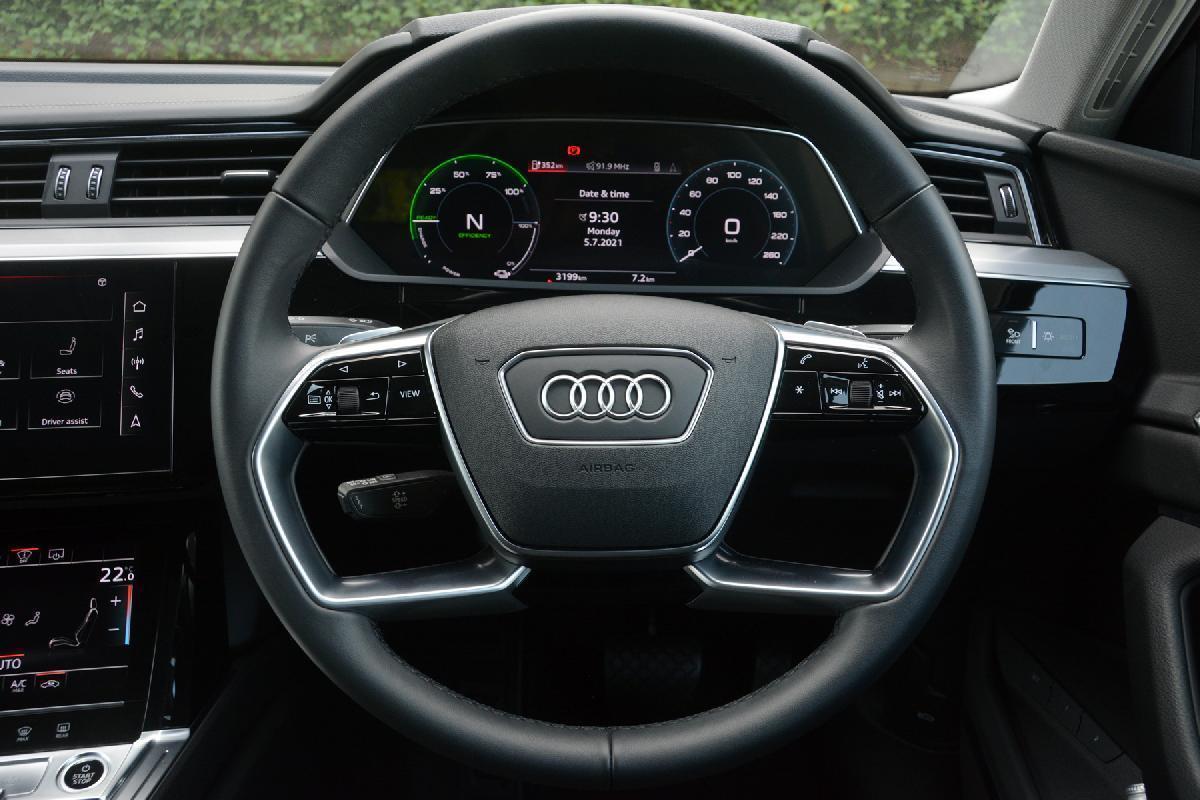 And then there is that quirky gear lever which seems to be from another planet altogether. We loved its solid feel and also how it made slotting the e-tron into different gears so much fun. 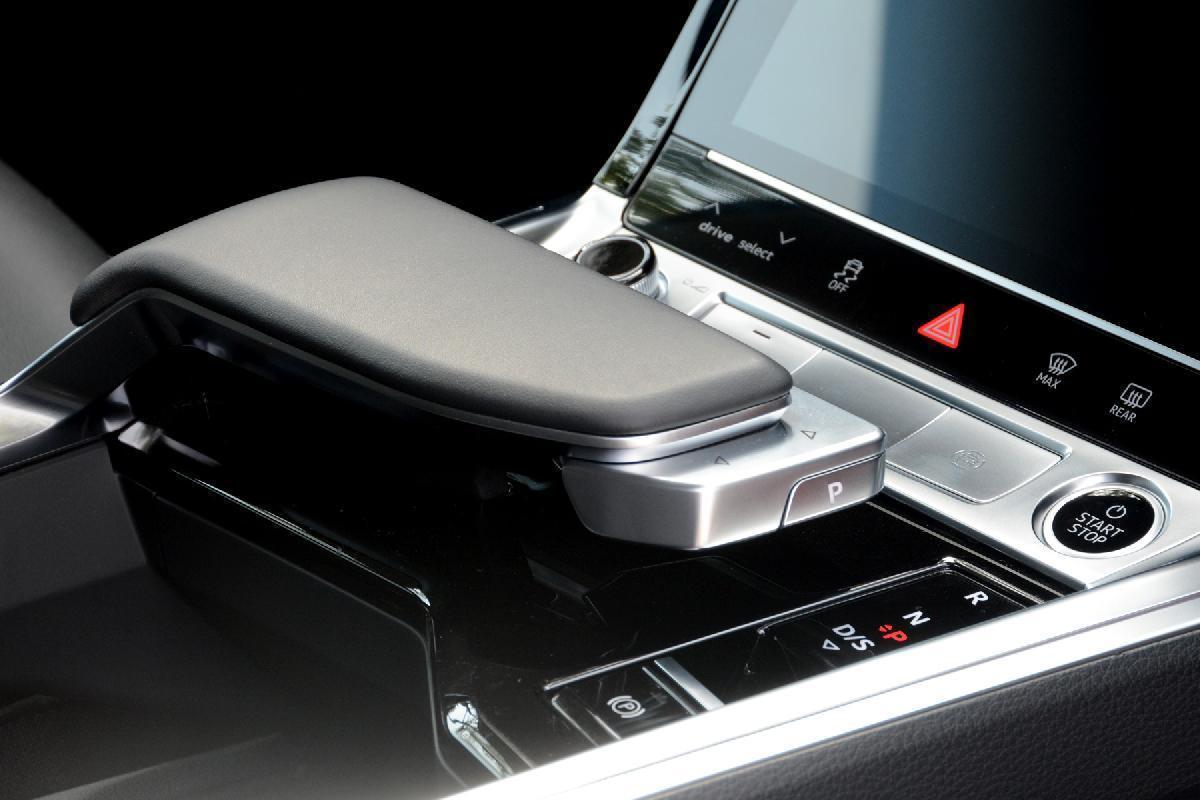 The e-tron also comes with paddle shifters but what they do, in the absence of the task of selecting gears on an EV, is offer the driver three levels of recuperation, to recover energy during deceleration. You can drive it in different modes but for those of you who really enjoy driving, you’ll want to probably just go straight to the ‘Dynamic’ mode to really experience the SUV’s true performance. 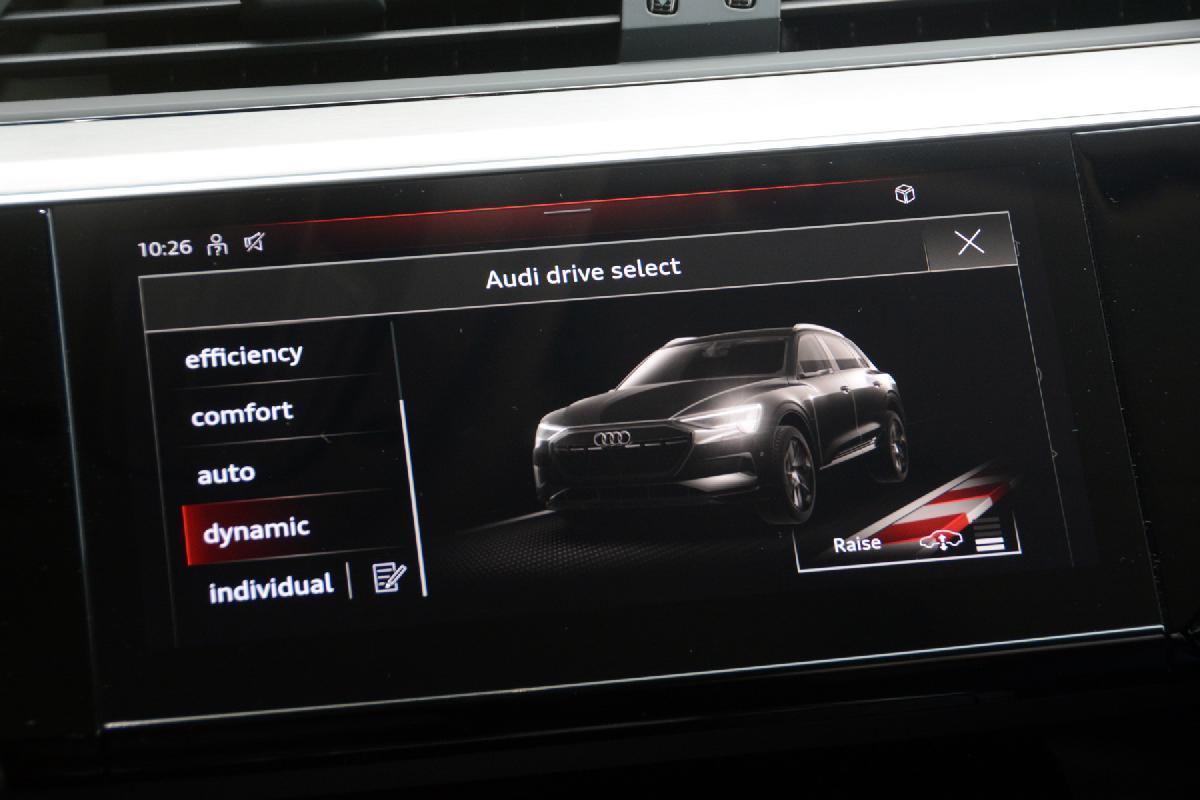 The all electric quattro drive train ensures that power is distributed to the wheels as required, thereby providing more traction while also bettering the e-tron’s handling.  Moving from an IC engine car into the e-tron, you will definitely appreciate the peace and quiet in here however, it is not completely silent. Audi has ensured that there is a faint engine sound to remind you that you are seated in the e-tron, and also for pedestrians on busy roads, there are external speakers fitted to sound like a car just in order to ensure that they’re not completely caught unawares. 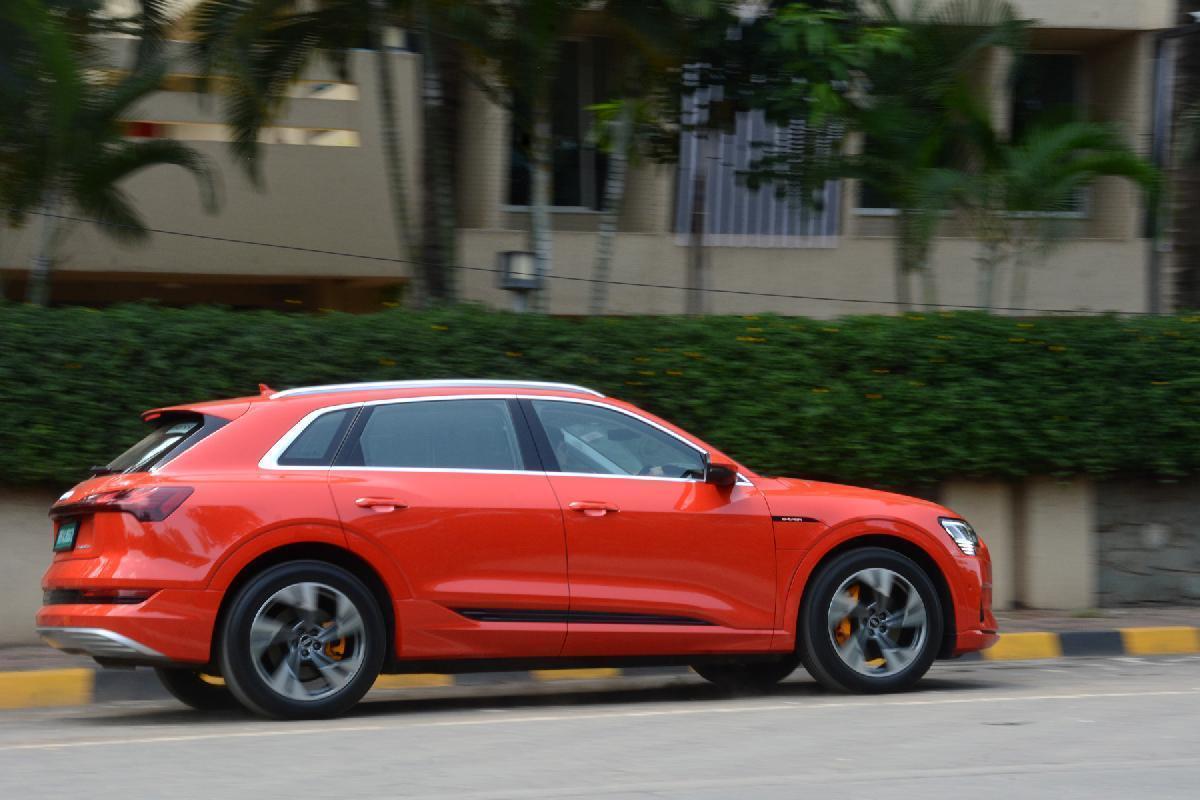 The e-tron, which in all likelihood will be driven in urban settings, and by that we mean on good roads, is also quite capable of handling bad potholed roads, thanks to the air suspension that it gets. Also, the underbody protection for the battery compartment which sits below the SUV, ensures that it is out of harm’s way especially when it comes to unauthorized speed breakers in our cities. The e-tron’s ride and handling is phenomenal and the body roll on this big and heavy EV is almost negligible, making driving this EV not just a truly delightful experience but also an unforgettable one.

So, if you’re one of those who believes that electric is driving the future, have the big bucks to blow on a luxury EV, and want to make a statement when it comes to your set of wheels about being environmentally conscious, you must totally check out the Audi e-tron. Not only is it an intelligent and fully connected EV that is smooth, silent, and spacious, but also one that comes with the quintessential Audi DNA. The e-tron 55 is available in eight colours: Catalunya Red, Floret Silver, Mythos Black, Glacier White, Galaxy Blue, Navarra Blue, Siam Beige and Typhoon Grey. 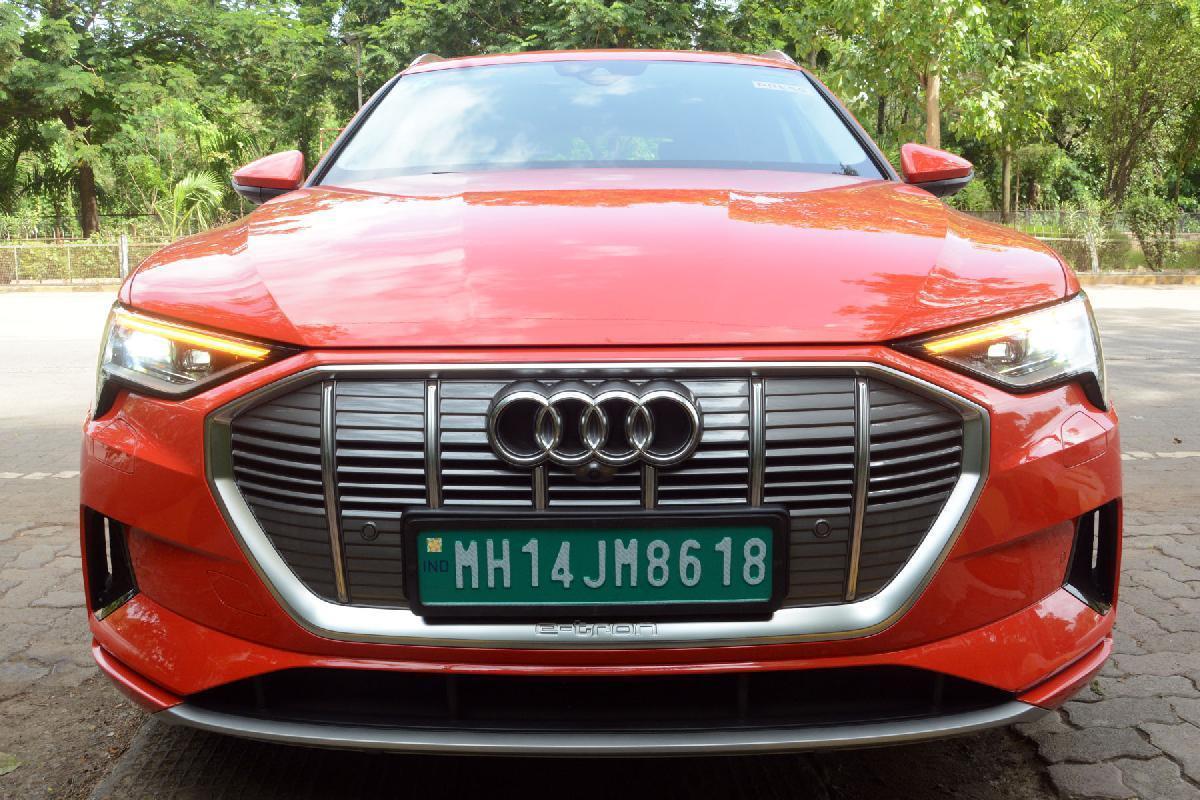 And for those who think that charging is still a pain point when it comes to EVs, Audi’s strong dealer network across India should inspire confidence about your e-tron purchase. More so because Audi India, plans to install over 100 chargers across 75 cities, which should ease things further. Also, with their service plans, battery warranties and buy back schemes, in place, it sure looks like Audi India has its EV road map well chalked out for its Indian buyers. 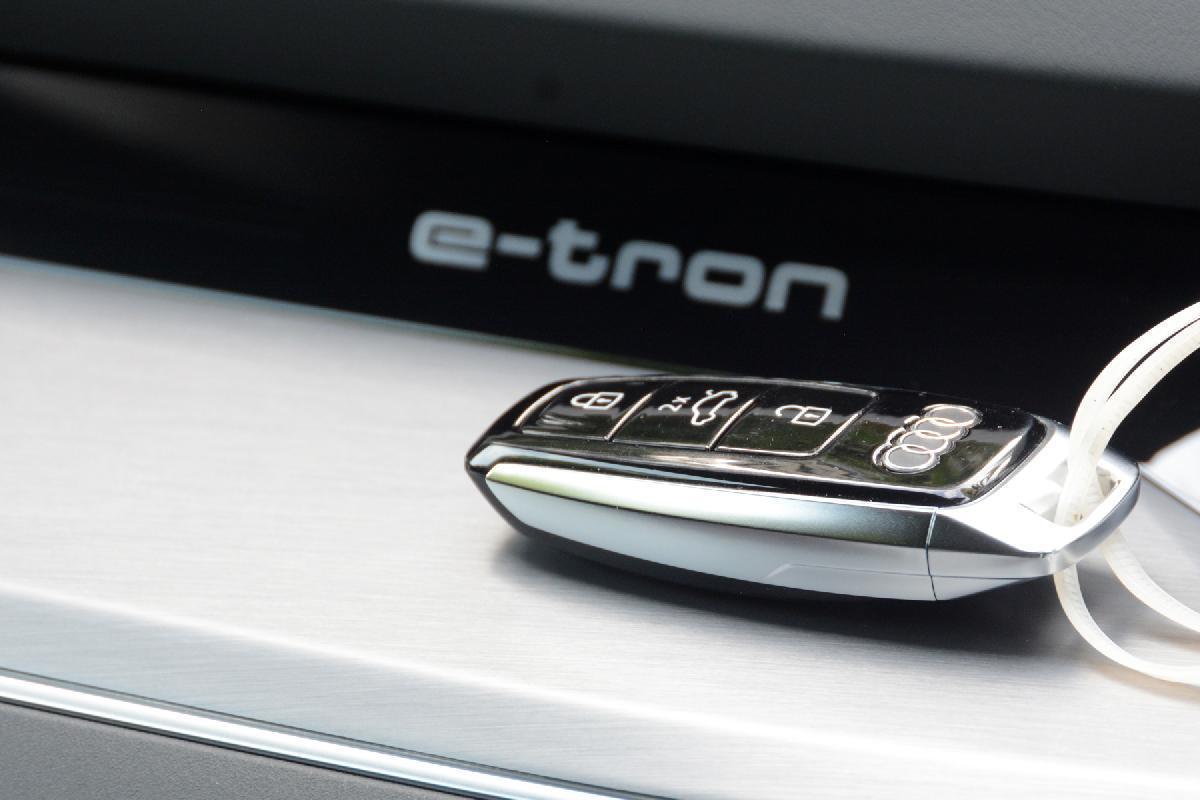 Say, what colour are your picking your Audi e-tron in?